Primary spontaneous pneumothorax (PSP) is defined as an abnormal accumulation of air in the pleural cavity without apparent underlying pulmonary disease. It typically occurs in adolescents who are tall, thin, and who smoke (1). PSP has a high recurrence rate of up to 55% with conservative treatment. Surgical approaches such as open thoracotomy, transaxillary mini-thoracotomy, and video-assisted thoracoscopic surgery (VATS) are effective and reduce the recurrence rate to 0 to 10% (1-3). Among the three surgical approaches, VATS is recommended in the British Thoracic Society (BTS) guidelines and is commonly used because it is associated with less surgical pain and shorter hospital stays than other methods (4). Although, VATS treatment has been demonstrated to be safe, to prevent recurrence (5), and to result in high patient satisfaction of the procedure (6), initial VATS treatment is controversial in patients with a first episode of PSP (7,8).

In the clinical setting, a stepwise approach with an escalating treatment algorithm is followed, in accordance with the guidelines of the BTS and the American College of Chest Physicians (ACCP) (4,9). Initial drainage should be considered if the size of the PSP is “large”; however, what constitutes a large PSP is different in each guideline. BTS guidelines define large as >2 cm of interpleural distance at the hilum, whereas ACCP guidelines define large as ≥3 cm of apex-cupola distance. These guidelines recommend that patients with persistent air leak (PAL) after 3 to 5 days of drainage intervention and those with a second episode of pneumothorax should be treated with surgery.

PAL causes prolonged hospital stays, which burdens patients and consumes medical resources. In addition, there is a report that prolonged delay of intervention decreases the effectiveness of VATS (10). Therefore, in patients with a high risk of PAL, early VATS treatment without waiting more than 3 days for failure of drainage treatment may be a good option. In this study, we used easy and simple methods to estimate pneumothorax size, defined as the distance between the chest wall and collapsed lung according to BTS and ACCP guidelines,

The purpose of this study was to investigate the risk factors for PAL in patients with a first episode of PSP. This information may promote more effective management of PSP.

From January 2011 to April 2019, 415 patients were admitted to Saiseikai Fukuoka General Hospital for treatment of pneumothorax. Ninety-six patients with underlying pulmonary disease (e.g., malignancy, interstitial lung disease, chronic obstructive pulmonary disease) or age over 50 and 111 patients with ipsilateral recurrent pneumothorax were excluded from this study (4). The remaining 208 had a first episode of PSP with initial drainage treatment. Seventy-four patients who underwent surgery within 48 hours after admission because of social factor, contralateral pneumothorax or spontaneous hemothorax and 12 patients who were treated conservatively were excluded; the remaining 122 patients were retrospectively analyzed (Figure 1). Early admission defined as hospital admission within 24 hours of symptom onset (e.g., chest pain, dyspnea, etc.); late admission defined as admission more than a day after symptom onset. The size of PAL was defined as any degree of air leakage lasting more than 72 hours. Low body mass index (BMI) was defined as BMI less than 18.5 kg/m2, consistent with the World Health Organization classification of underweight (11). The study protocol was approved by the institutional review board of Saiseikai Fukuoka General Hospital (IRB approval no., 2019-7-2). 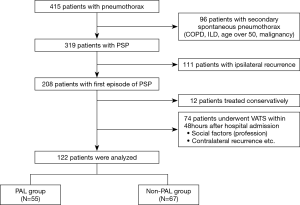 The initial chest X-ray (CXR) was separately examined by two thoracic surgeons (T.A., T.K.) and one resident (A.H.). If the independent assessments did not match, the CXR were reviewed by all three investigators together to reach a consensus. The estimated pneumothorax size on CXR taken at admission was assessed with the following three methods: 1. interpleural distance at the hilum, in accordance with BTS guidelines (4); 2. apex–cupola distance, in accordance with ACCP guidelines (9); and 3. Light index, calculated from the ratio of the diameter of the collapsed lung to that of the hemithorax (12) (Figure 2). The estimated pneumothorax percentage = (1 − L3/H3) ×100, where H = hemithorax diameter and L = diameter of collapsed lung (Figure 2). 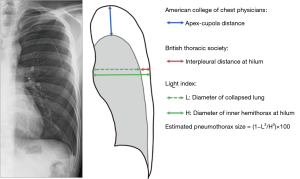 Figure 2 Three methods for estimating the size of pneumothorax.

Initial chest tube drainage was performed with 8-Fr small-bore aspiration catheters (Aspiration Kit®) or 16-Fr to 20-Fr trocar tubes by pulmonologists or thoracic surgeons. The chest tube was removed within 24 hours of a negative clamp test. Absence of air leak was defined as no detectable air bubble with deep breathing or coughing and complete lung expansion on CXR. The patients were allowed to leave the hospital after tube removal; however, some patients underwent VATS regardless of the absence of air leaks because of patient preference or a history of contralateral pneumothorax. Some patients refused surgery and therefore did not undergo VATS. VATS was performed with single- or 3-port thoracoscopic technique under general anesthesia with single-lung ventilation. Wedge resection was performed with an endoscopic stapler. The staple line was covered with a polyglycolic acid sheet (NEOVEIL; Gunze, Ayabe, Japan). Chest tubes (20-Fr) were placed routinely after surgery. Neither chemical pleurodesis nor pleurectomy was performed during or after VATS. Postoperative chest tubes were removed within 24 hours of confirmation of the absence of air leaks and full expansion of lung. Patients left the hospital the day after chest tube removal. 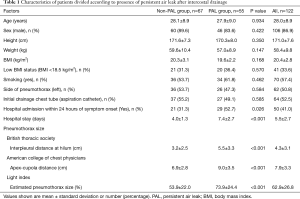 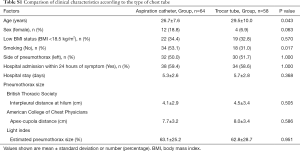 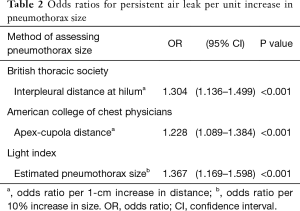 Interpleural distance as a predictive factor for PAL

Treatment allocation and recurrence after treatment of first Episode of PSP

Among the 55 patients in the PAL group, eight who refused surgery were treated with drainage alone, whereas 47 underwent VATS (Figure S1). Among the 67 patients in the non-PAL group, sixteen patients underwent VATS despite absence of air leak. Recurrence was more frequent in the drainage-treatment group (15/59, 25.4%) than in the VATS group (6/63; 9.5%). Additionally, among the patients who underwent VATS, recurrence was more frequent in the PAL group (5/16, 31.3%) than in the non-PAL group (1/47, 2.1%) (Figure S1). 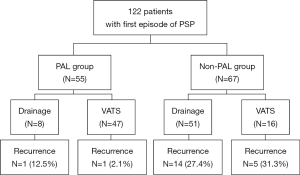 Our data also provide information for the management of PSP. The BTS guidelines recommend early surgical consultation for patients with PAL. However, in patients with large pneumothorax, the pulmonologist should consult the thoracic surgeon soon after admission without waiting a few days before considering surgical intervention. Waller et al. reported that delayed referral to a thoracic surgeon reduced the success rate of VATS in patients with PAL, a finding that supports our recommendation for early consultation (10).

We also investigated whether the size of the chest tube affected PAL. Whether a pigtail catheter or a large-bore chest tube should be used for drainage is controversial. The size of the catheter used for initial drainage varied according to physician’s preference, 8Fr small-bore aspiration catheters tended to be used in young patients, never-smokers, and female patients. However, the size of the chest tube was not a factor in PAL. This finding is consistent with the data from a recent meta-analysis by Chang et al., who found that success rates were similar with the use of a pigtail catheter versus a large-bore chest tube (16).

Another surprising result from our study is that early admission after symptom onset was a risk factor for PAL. In other words, delayed admission increased the success rate of initial drainage treatment. One hypothesis to explain this result is that the amount of air leak might have been smaller among patients with delayed admission than among those with early admission. A smaller amount of air leakage may be more likely to resolve with drainage treatment than larger amounts. Recently, a two-phase (discovery and validation) cohort study demonstrated that a longer time from symptom onset to needle aspiration was associated with treatment success (17). Although the initial treatment approach in the above study differed from that in our study, both findings indicate that the time of symptom onset is an important factor in the treatment of pneumothorax.

We acknowledge that there are several limitations in this retrospective study conducted at a single institution with a small sample size.

The first limitation is that we did not include CT findings in our study. Bullae and blebs are important CT findings that many thoracic surgeons offer VATS because patients with large bullae have a high risk of ipsilateral recurrence of pneumothorax (18,19). In addition, some studies have used the features of bullae on CT to assign lung dystrophy severity scores to determine the indications for PSP treatment (19,20). However, the scoring system is too complicated and prone to observer bias for use in the clinical setting. Moreover, the timing of CT examinations after initial drainage also influences the size of bullae. Therefore, we excluded CT findings from our study.

Nine patients in the present study did not undergo CT scan. No bullae or blebs were detected in 14 cases, whereas 99 patients had some bullae/blebs. Although the statistical power was low, exploratory multivariate analysis revealed that interpleural distance remained the strongest independent predictor of PAL even when the presence of bullae was included as a factor (data not shown).

The second limitation is that CXRs included both posteroanterior and anteroposterior projections. This difference could affect the quality of pneumothorax size measurement. In addition, it has been reported that CXR evaluation is not an accurate method of measuring pneumothorax size (21). Moreover, CXR is routinely performed in full inspiration. However, chest pain may have prevented full inspiration in some cases, which also may have caused measurement bias. However, in the clinical setting, the priority is not precise measurement of pneumothorax size but rapid decision-making with a simple method based on CXR.

In conclusion, we demonstrated that the interpleural distance at the level of the hilum is a good predictive marker for PAL in patients with a first episode of PSP. This simple and useful method may help promote early referral to thoracic surgeon and decision-making when considering surgical treatment for a first episode of PSP.

We thank Rebecca Tollefson, DVM, from Edanz Group (www.edanzediting.com/ac) for editing a draft of this manuscript.

Conflicts of Interest: All authors have completed the ICMJE uniform disclosure form (available at http://dx.doi.org/10.21037/jtd.2020.04.48). The authors have no conflicts of interest to declare.

Ethical Statement: The authors are accountable for all aspects of the work in ensuring that questions related to the accuracy or integrity of any part of the work are appropriately investigated and resolved. The study protocol was approved by the institutional review board of Saiseikai Fukuoka General Hospital (IRB approval no., 2019-7-2).