Congenital lung malformations (CLM) are a heterogeneous group of disorders with a great variation in their clinical and radiological presentation. Their annual incidence is comprised between 30 and 42 cases per 100,000 population (1). Due to the advances in prenatal diagnosis, only few CLM are revealed in adulthood (2) requiring surgery to prevent complications, usually of infectious order (3). As a result, a thoracoscopic approach may seem challenging and even unreasonable. Some authors have demonstrated this approach to be safe and feasible in children. Our goal was to state whether a thoracoscopic lobar or sublobar resection for CLM could be an option in adults.

Between 2007 and 2014, 69 patients underwent a thoracoscopic lobectomy or segmentectomy for a benign congenital condition in our department. All patients were evaluated preoperatively by chest computed tomographic (CT) scan with intravenous (IV) contrast. We used a full thoracoscopic approach, according to a previously described technique (4). Out of these patients, 11 were operated for a CLM. Bronchiectasis was excluded from our study, as it is not always possible to determinate if these are acquired or congenital. The series was analyzed retrospectively from prospectively collected data including demographic criteria, clinical symptoms, surgical procedure, final histology and one month follow up.

We have previously described our technique in detail (4). In brief, the procedure was performed under general anesthesia with split ventilation using a double-lumen endotracheal tube. Patients were positioned in lateral decubitus as for a thoracotomy. The surgeon stood anterior or posterior to the patient, depending on the segments to be resected. He usually stood posterior to the patient for right sided resections and anteriorly for left sided ones. Two monitors were used and the deflectable thoracoscope was placed on a mechanical scope holder. Only specifically designed endoscopic instruments for video assisted thoracoscopic surgery (VATS) major resections were used. Trocars had a diameter ranging between 3 and 15 mm. Any systemic feeding vessels were identified and divided. Larger vessels were divided with endostaplers while haemostasis of small caliber vessels was performed with clips, with a bipolar vessel sealing device or with a combination of both methods. The intersegmental plane was divided by a combination of bipolar sealing device (for its peripheral and thin portion) and stapling (for its central and thick portion) using 4.8 mm staples. When the remaining segment was mobile and at risk of torsion, it was anchored to the adjacent lobe. No utility incision was used. On completion of the pulmonary resection, the specimen was wrapped into an endobag and retrieved through one of the port sites that was enlarged, depending on the specimen size. The use of a rib spreader was never required for specimen extraction. In most cases, only one chest tube was placed through one of the port site.

Out the 11 patients, 4 were male and 7 were female, ranging in age from 14 to 55 (mean: 30 years). Three patients were asymptomatic in which CLM was incidentally detected in routine medical controls, seven presented with recurrent pulmonary infections and one with pneumothorax. All patients were operated on by thoracoscopy and underwent six lobectomies and five anatomic segmentectomies. There was no intraoperative complication. The mean duration of surgery was 163 minutes (range, 119-315 minutes) and the mean blood loss was 69 mL (range, 0-250 mL). Six of the patients had an uneventful postoperative course while five had minor complications: four prolonged air leak and one pneumothorax after chest tube removal, requiring drainage. The mean drainage duration was 5 days (range, 2-10 days) and the mean stay 7.1 days (range, 3-14 days). Final pathological examination concluded to the following diagnoses: bronchial atresia (n=6), sequestration (n=2) (Figure 1), intrapulmonary bronchogenic cyst (n=2), and adenomatous cystic malformation (n=1). All but 1 patient—who presented with residual minor pleural effusion which was managed conservatively—had a normal chest X-ray at 1 month. 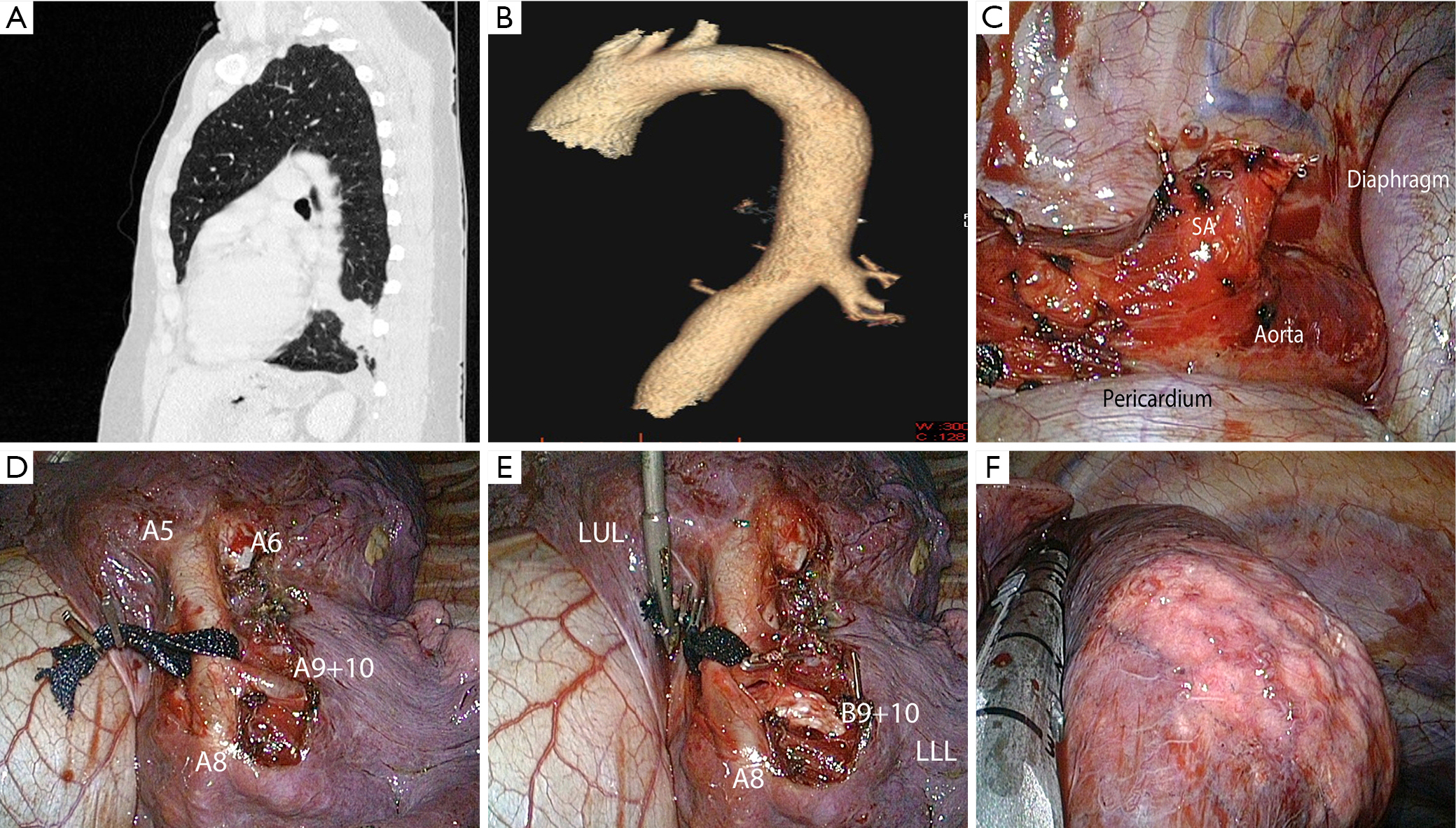 Congenital lung anomalies refer to a heterogeneous group of pulmonary developmental disorders that affect the lung parenchyma, the arterial supply, and the venous drainage to the lung, or a combination of these entities. There are four main types of CLM that can be discovered in adulthood. Congenital bronchial atresia results from focal interruption of a lobar, segmental, or subsegmental bronchus with associated peripheral mucus impaction (bronchocele or mucocele) and associated hyperinflation of the obstructed lung segment. Pulmonary sequestration is characterized by normal, non-functional lung tissue with no connection to the bronchial tree and receiving its blood supply from the systemic circulation. Bronchogenic cysts result from abnormal budding from a segment of the tracheobronchial tree after it has differentiated from the embryonic foregut during the first weeks of development. They are usually solitary cysts lined with either squamous or ciliated pseudostratified respiratory epithelium. Congenital cystic adenomatous malformations (CCAMs) are characterized by a multicystic mass of lung tissue with proliferation of bronchial structures and lung tissue showing aberrant, differentiated architecture, with various degrees of cyst formation.

The increased use of antenatal ultrasonography has resulted in early detection of pulmonary malformations, becoming pediatric population the most relevant group of patients diagnosed by CLM (5). Until now, thoracotomy was the only option for small infants, and surgery was not widely recommended because of its effects on chest wall: asymmetry, shoulder girdle weakness, and scoliosis-induced pulmonary dysfunction. However, in the recent years minimally invasive surgery has been recognized as safe and feasible for the treatment of CLM in children (6-8). Benefit of minimally invasive approach in pediatric patients includes decreased length of stay, avoidance of musculoskeletal complications, faster recovery and superior cosmesis. Consequently, the treatment of asymptomatic congenital lung lesions is becoming less controversial with most centers opting for removal of these lesions (9). However, very few articles deal with this issue in adults (10) and none with the following concerns: (I) is a thoracoscopic approach appropriate and (II) is a sublobar resection indicated?

The best operative strategy for a congenital lung lesion should completely eliminate the risk of disease associated complications with minimal perioperative and long term morbidity. On this basis, the aim of this study was to analyze the results of totally endoscopic lobar or sublobar resection for adult patients with CLM.

In our series, all patients underwent surgery by totally thoracoscopic approach (100% video display, no access incision, only use of endoscopic instruments) even though most of them had a previous history of recurrent pulmonary infection. A thoracoscopic resection has been possible in all patients without intraoperative complication. In a series of 22 children, Tanaka et al. (11) demonstrated that totally thoracoscopic approach could be safely performed with less bleeding and shorter hospital stay than assisted-VATS (including utility incision).

The mean operative time and mean blood loss were just slightly superior to those of our series of thoracoscopic lobectomies (12). In the five patients who had an attempt of segmentectomy, there was no need to transform the procedure into a lobectomy and there was no intraoperative complication. The most common postoperative complication in our series was prolonged air leak. This may be partly related to the chronicity of these conditions with some loss of elasticity of the parenchyma that impairs pulmonary reexpansion.

As congenital malformations are benign and some patients are operated prophylactically, it seems advisable sparing as much as parenchyma in order preserving their pulmonary function. In fact, there is a paucity of data comparing segmental lung-sparing resection to lobectomy in the treatment of these malformations. We suggest that segmental resection should be considered for these lesions as their embryological origin is of segmental nature and it would allow the preservation of normal, healthy lung parenchyma.

This means that anatomic segmentectomies should be preferred to lobectomies, whenever possible. Thoracoscopic sublobar resections have recently been proposed in children with CLM. Conclusions of these studies were that segmental resections were safe and spare healthy lung tissue (13,14). Although the procedure can be more challenging in adults because of infectious sequellae, it is feasible.

We suggest that if imaging is in favor of major infection (presence of multiple and large lymph nodes, pleural effusion), the patient should undergo a thoracotomy. In all other cases, a thoracoscopy could be the first stage of the procedure. In most patients, it will demonstrate that pleural adhesions are rare and/or loose and that the fissure can be dissected, so that the resection can be performed safely thoracoscopically.