When to suspect a thymoma: clinical point of view

Even though rare, thymomas are the most common neoplasms arising from the thymic epithelium of the anterior mediastinum. With an incidence of 0.13 cases per 100,000 persons/year in the USA, they can occur in patients of any age but are very rare in the first 2 decades of life (1). The ratio of men to women in the published literature is roughly equal. Given the rarity of thymomas, the knowledge about the etiology is very limited. A causal relationship between tobacco, alcohol or environmental factors and an increased incidence of thymoma has never been demonstrated.

Histologically thymoma arises from thymic epithelial cells but contains a variable number of lymphocytes, which are not neoplastic.

Subtyping and classifying thymomas has represented a big challenge and indeed several pathologic, clinical and surgical classifications have been developed and published over the years. In 1961, Bernatz and colleagues classified thymoma based on the predominant lymphocytes and epithelial component (2).

In 1985, Marino and Müller-Hermelink reported a new classification according to the assumed localization of the malignant thymus cells including five subtypes: medullary, mixed, predominantly cortical, cortical thymomas, and well-differentiated thymic carcinomas (4).

Nowadays, the WHO histologic classification along with Masaoka are the most broadly used classification systems for thymic epithelial tumors, providing a useful guidance for surgeons, oncologists and radiation oncologists in clinical decision-making (5-7).

Clinical presentation of thymomas can vary from an incidental finding on chest radiography (Figure 1) or computed tomography (CT) scan (Figure 2), to symptoms deriving from mass effect in the mediastinum or from a systemic syndrome. About 30% of thymoma patients are asymptomatic and the diagnosis is made incidentally; maybe this percentage will continue to rise due to the increasing and widespread use of CT scans, also in the setting of lung cancer screening. 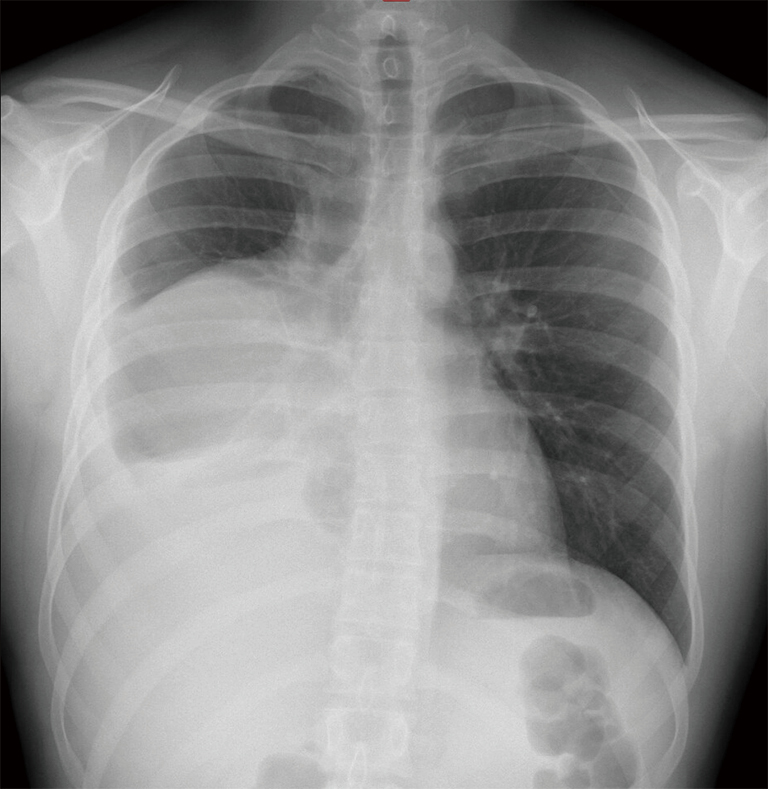 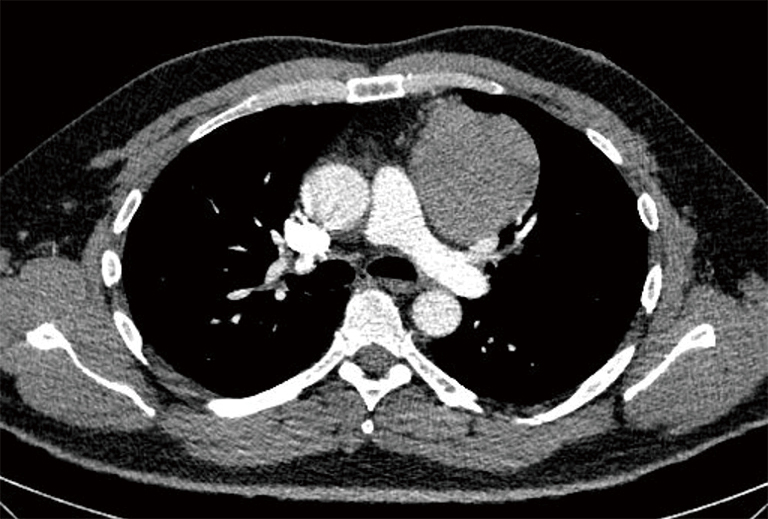 Up to 80% of thymomas are visible on chest radiography, although without any specific signs. Usually they present like an ovoid or lobulated, smooth, well-marginated mediastinal tumor, abutting unilaterally (rarely this mass may protrude bilaterally). In the lateral view such masses are often easily visible as an abnormal radiopacity in the retrosternal space (8).

The typical CT features of thymoma (well defined and distinct from the surrounding mediastinal fat, round or lobulated, homogenous) are highly evocative of the diagnosis. Unlike other mediastinal tumors, thymomas are usually not associated with metastatic lymphadenopathy or with lung metastases. The use of intravenous contrast is not mandatory per se in order to characterize the thymic mass but it may certainly help in evaluating the invasiveness of the tumor in the preoperative staging and, therefore, therapeutic decision-making.

The tumor is usually located ventral to the pericardium, aorta, pulmonary artery, or superior vena cava, despite thymomas have been reported in locations everywhere between the lower neck and the cardiophrenic space (8).

The local tumor growth could trigger several symptoms due to compression and/or invasion of adjacent structures. However, even patients with invasive lesions tend to show a prolonged clinical course. The most common symptoms, although nonspecific, are chest discomfort/pain, cough and dyspnea. If thymoma has a more aggressive behavior growing abnormally, some unusual manifestations, such as superior vena cava syndrome and phrenic nerve paralysis, may be present. Stridor and dysphagia can be late signs, caused by compression of the trachea and/or esophagus.

The presence of pleural or pericardial effusion is very unusual and may suggest an advanced stage of the disease.

Very rare, with few cases published in the literature, is the spontaneous rupture of thymoma as onset manifestation of the tumor (9-11)

Thirty-five percent of patients with thymoma have myasthenia gravis (MG; from Greek: myos = muscle, asthenos = weakness, and Latin: gravis =severe), a complex autoimmune disorders characterized by increasing muscle fatigability and weakness which involves skeletal muscles and is caused, in more than 85% of cases, by circulating antibodies against nicotinic acetylcholine receptors (AChRs) (12).

MG is an uncommon disease with a bimodal age-related incidence peak (patients between 20–30 years and between 60–80 years) (13). The specific pathophysiologic mechanisms that lead to the AChRs antibodies production are not fully understood.

The most likely hypothesis is that, in some patients, auto-reactive T cells can recruit AChR-responsive B cells, stimulating the production of pathogenic anti AChR antibodies. Consequently, the decreased number of functional AChRs causes a deficit in neuromuscular transmission (14). The reasons of the T cells deregulation remain unclear, even if Epstein-Barr virus infection has been postulated (15). However, 20% of patients with MG have no circulating antibodies against AChR but rather present antibodies against muscle specific tyrosine kinase (MuSK), a subclass of immunoglobulin G4.

Up to 50% of patients with AChR and MuSK negative antibodies present anti-low-density lipoprotein receptor-related protein 4 (Lrp4) antibodies, an immunoglobulin G1 subclass which inhibits the binding of their target with agrin, a protein which plays a key role in the structure and function of the neuromuscular junction.

The subtypization of the abovementioned antibodies is very important because symptom distribution and response to treatment differ between the various form of MG (Table 1) (14).

The symptomatology of MG consists mainly of voluntary muscles fluctuating weakness (Table 2). In an early phase, patients often complain of ocular muscle weakness with ptosis along with diplopia without deficits of sensorium. Most patients show a progress to generalized weakness during the first 2 years after the diagnosis. Fatigue of the proximal limbs muscles causes difficulties in climbing stairs and holding the arms above the head. 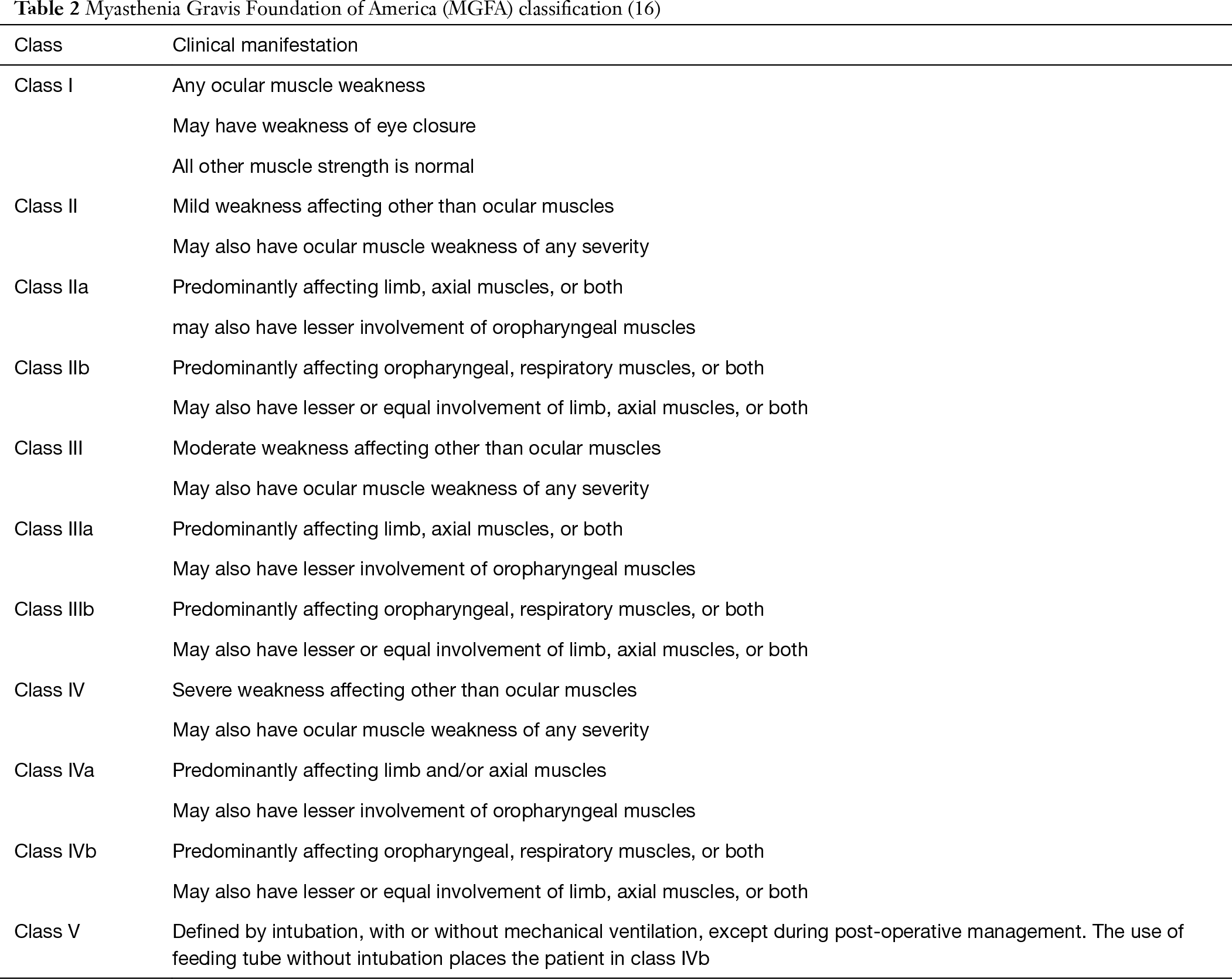 Other potential involved muscles are the bulbar muscles, resulting in dysarthria, dysphagia, difficult mastication, and dyspnea.

Impairment of the facial muscles can produce the so called “hanging jaw sign” (because of the inability to hold the mouth closed) and the “myasthenic snarl” (when patients try to smile).

One of the very typical aspects of this disease is the fluctuation and variability of symptoms within a period of a day (muscle fatigability exacerbates in the evening), months or years. As such, patients can experience periods of remission and periods with severe exacerbations.

The most feared complication of MG is a myasthenic crisis, often triggered by a respiratory infection or surgical procedures. The majority of patients with a myasthenic crisis must be admitted to an intensive care unit where the respiratory failure usually requires ventilatory assistance (non-invasive or with endotracheal intubation). The overall mortality of such a crisis has decreased in the past 50 years from 50% to 6%.

The diagnosis is nowadays made by detecting the presence of myasthenic antibodies in the serum, by performing electrophysiological tests such as single-fiber electromyography (SFEMG), and by repetitive nerve stimulation (RNS). Suppression of acetylcholinesterase (AChE) with pyridostigmine or ice pack test, which normally ameliorates the symptoms, have been widely used.

All patients with MG should be screened with a CT scan of the chest searching for possible thymic hyperplasia or tumors. In case of radiologically suspect features, a biopsy should be avoided due to the risk of exacerbating the disease as well as to prevent potential spilling/seeding of tumor cells.

An interdisciplinary discussion amongst neurologist and thoracic surgeon is of the essence when evaluating treatment options (anticholinesterase agents, immunosuppressants, plasmapheresis, immunoglobulin, thymectomy) and their sequence.

It has been reported that 95% of thymomas show an absence of autoimmune regulator (AIRE) expression along with reduced major histocompatibility complex (MHC) class II expression, suggesting that dysregulation of T cell growth is one of the main factors in the pathogenesis of paraneoplastic disorders in thymoma (17).

Besides MG, other syndromes commonly associated with thymoma (2–6%) are pure red cell aplasia and hypogammaglobulinemia. Patients who present with these paraneoplastic conditions should always undergo a chest CT scan to rule out a thymoma as primum movens.

Pure red cell aplasia is a rare condition caused by severe normocytic anemia, reticulocytopenia and absence of erythroblasts in the bone marrow, and can only be found in a small percentage of patients with thymoma. Surgical thymectomy is usually indicated in these patients even if the initial remission rate is only 30% and an additional treatment with corticosteroids, cyclosporine, or cyclophosphamide is therefore mandatory in most patients.

Hypogammaglobulinemia, also known as Good’s syndrome, is a rare combined T- and B-cell immunodeficiency, which renders patients highly susceptible to bacterial, viral, fungal and opportunistic infections. To date the pathophysiology of the disease is not fully understood but in published case series thymoma was an incidental finding on chest radiograph or CT scan in 10–41% of patients (18,19).

Despite the fact that progress has been made regarding the understanding of thymoma and associated paraneoplastic diseases, the gold standard management of affected patients remains unknown.

Given the variability of thymoma clinical presentations, a high index of suspicion is required in order to establish the right diagnosis. Understanding the role of the thymus in the pathophysiology of different autoimmune diseases may help in case of uncommon presentation.

Conflicts of Interest: Both authors have completed the ICMJE uniform disclosure form (available at http://dx.doi.org/10.21037/jtd-2019-thym-05). The series “Thymoma” was commissioned by the editorial office without any funding or sponsorship. The authors have no other conflicts of interest to declare.