Utility of EBUS-TBNA for diagnosis of mediastinal tuberculous lymphadenitis: a multicentre Australian experience

Culture is the gold-standard for diagnosis of mediastinal tuberculous lymphadenitis. All reasonable attempts to achieve microbial diagnosis should be made, as this allows confirmation of the diagnosis and phenotypic drug susceptibility testing which guides antimycobacterial therapy. A majority of patients with mediastinal tuberculous lymphadenitis will have associated lung parenchymal infection (1). Bronchoscopic investigation in such cases is associated with a very high diagnostic sensitivity (2).

In contrast, routine bronchoscopic assessment of patients with isolated tuberculous mediastinal lymphadenitis is a very low yield procedure (3), previously necessitating surgical biopsy (cervical mediastinoscopy) to achieve microbial diagnosis in such cases (4). Mediastinoscopy may be associated with significant potential morbidity/mortality (2%/0.2%) (5,6) and while limited reports indicate high microbiologic diagnostic yield for tuberculosis (TB) following mediastinoscopy (3,7,8), complications specific to TB, such as chronic tuberculous sinus in the endoscopy tract, have been described up to 8% (7).

Endobronchial ultrasound-guided transbronchial needle aspiration (EBUS-TBNA) is a minimally invasive technique allowing sampling of mediastinal lymph nodes via fine needle aspiration under direct sonographic visualisation. It has a low rate of morbidity, and has demonstrated utility in the diagnosis of mediastinal lymphadenopathy secondary to malignancy, lymphoma and sarcoidosis (9-13). Diagnosis of mycobacterial lymph node infection by EBUS-TBNA was first reported in 2009 (14), though to date few studies have reported the accuracy of this technique for the diagnosis of isolated mediastinal tuberculous lymphadenitis. Single centre studies from TB-endemic countries have reported variable results (15-18), and an English multicentre study reported only patients in whom the final diagnosis was confirmed as TB (19). Use of PCR-based diagnostic methods has also been described in one study, though the authors did not describe diagnostic performance of EBUS-TBNA for establishing the diagnosis of TB (20).

Here we present our multi-centre experience of EBUS-TBNA for evaluation of patients with suspected tuberculous lymphadenopathy, and describe the performance of this procedure in this patient population, in particular the sensitivity and diagnostic accuracy of EBUS-TBNA for microbiologic diagnosis of TB.

A multi-site retrospective study was conducted across four Australian tertiary referral centres in which EBUS-TBNA was performed on a regular basis. Institutional Ethics Committee approval was granted for the performance of this study.

This study included all patients who had undergone EBUS-guided lymph node aspiration for suspected isolated mediastinal tuberculous mediastinal lymphadenopathy, due to mediastinal lymphadenopathy on CT chest in the absence of parenchymal abnormality (Figure 1). Patients were identified through interrogation of the hospital laboratory databases and bronchoscopists’ individual logbooks. Results from the procedures were recorded, including microscopy for acid-fast bacilli, cytology, mycobacterial cultures, standard bacterial cultures, and, where performed, the results of nucleic acid amplification techniques (NAAT).

All bronchoscopists were experienced with the procedure. EBUS-TBNA was performed using a dedicated linear array bronchoscope (BF-UC180F-OL8; Olympus, Tokyo, Japan). In all cases, 22-gauge fine needle aspirates were performed from enlarged lymph nodes identified on CT chest. Cytology specimens were prepared as slides without alcohol fixation for microscopy and staining for acid-fast bacilli, as well as cell blocks following centrifugation. As previously described, serial sections were cut and placed on slides before staining with haematoxylin and eosin (21). Further samples were placed in saline and transported directly to laboratories for mycobacterial culture.

Post-procedural diagnoses were obtained from the clinical records. Where these were unavailable, or where there was uncertainty regarding the post-procedural diagnosis, the referring physician was contacted to provide contemporaneous clinical information. TB diagnoses must be notified to Health authorities by law. State-wide TB registries were examined to identify patients whose EBUS-TBNA samples were mycobacterial culture negative but who were subsequently diagnosed with TB.

Patients were considered to have had a diagnosis of mediastinal tuberculous lymphadenitis if they met one or more of the following criteria:

Patients were considered not to have had a diagnosis of mediastinal TB lymphadenitis where:

Finally, NAATs were analysed and their results referenced against the gold standard of TB culture.

From January 2010 to November 2013, 159 EBUS-TBNA procedures where specimens were sent for microbiologic analysis were performed. No procedural complications occurred. One case of suspected persistent mediastinal TB lymphadenitis was excluded from the analysis since the patient had been on anti-tuberculous treatment for the preceding 6 months, therefore 158 patients were included in the final analysis. No patients underwent cervical mediastinoscopy or endoscopic ultrasound during the study period. No patients were known to be infected with the human immunodeficiency virus. Post-procedural and final diagnoses are recorded in Table 1. The median time between procedure and cross-check against the relevant TB registry was 532 days (range, 47-1,125 days). 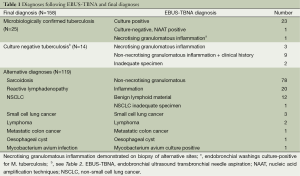 Thirty-nine patients received a final diagnosis of TB. EBUS-TBNA specimens yielded a microbiologic diagnosis in 24 (62%), with 23 procedures resulting in culture positive MTB and one culture-negative specimen demonstrating NAAT positive result, together with granulomatous inflammation in cytologic specimens. Overall, NAAT testing was performed in 13 patients with microbiologically confirmed TB, with five positive results (38%). NAAT was performed in 16 patients where the final diagnosis was not TB, and in all cases were negative (100%). There were 15 patients with lymph node aspirates that were negative on mycobacterial culture that were treated for mediastinal TB. The diagnosis of mediastinal TB lymphadenitis was supported by cytology in 12 cases. These had granulomatous inflammation from EBUS-TBNA specimens (Figure 2) and a high pre-test probability for MTB infection based on their country of origin and presenting clinical and radiological features. Test and patient characteristics of the culture negative TB cases are recorded in Table 2. There were 119 cases of non-tuberculous mediastinal lymphadenopathy, none of which were notified to the TB registry during the follow-up period. In one of these cases no lymphoid material was aspirated, and a diagnosis of non-small cell lung cancer was subsequently made from a biopsy of an alternative site. Three patients had a diagnosis of TB following non-diagnostic EBUS-TBNA (8% false negative rate)—one patient (2.5% of all patients with final diagnosis of TB) returned a positive culture result from endobronchial washings. In a further two cases the diagnosis was subsequently achieved through demonstration of necrotising granulomatous inflammation following biopsies of alternative sites. 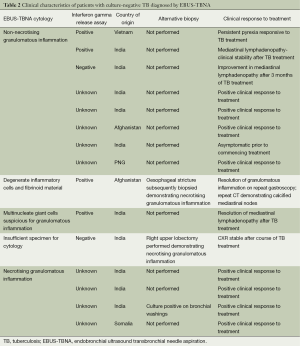 EBUS-TBNA is a minimally invasive technique that has become the procedure of choice for evaluation of mediastinal/hilar lymphadenopathy due to its excellent diagnostic accuracy in staging of lung cancer and evaluation of numerous other processes (11-13). This procedure has an excellent safety profile and cost advantages in comparison to surgical mediastinoscopy (10). Multiple studies have demonstrated diagnostic sensitivity is equivalent to surgical mediastinoscopy (13,24). Complications are rare, with a systematic review reporting no important complications among over 1,600 patients undergoing EBUS-TBNA for evaluation of mediastinal lymphadenopathy (12). Our findings demonstrate excellent efficacy & safety of EBUS-TBNA for diagnosis of suspected isolated mediastinal tuberculous lymphadenitis.

Multiple previous reports have confirmed the ability of EBUS-TBNA to diagnose mediastinal mycobacterial infection (9,14,16,25,26) though few have examined diagnostic accuracy, particularly the ability to obtain microbiologic confirmation of TB infection. Only one other multicentre study has been published, with Navani et al. reporting a lower sensitivity of EBUS TBNA for the diagnosis of culture or NAAT confirmed TB lymphadenitis of 47%. Their sensitivity for a composite endpoint of positive culture or positive clinicopathological diagnosis was similar to our results (94%) (27). This study only included patients ultimately diagnosed with TB, rather than outcomes for patients in whom EBUS-TBNA may be used to confirm a clinical suspicion, therefore could not report NPV or diagnostic accuracy.

Other studies from TB-endemic countries describing use of EBUS-TBNA for diagnosis of mediastinal tuberculous lymphadenitis report sensitivity for culture-positive diagnosis from 38% to 46%, and sensitivity for a composite microbiological and clinicopathological diagnosis of 69% to 86% (31/36 TB cases) (15,17). These findings are consistent with studies assessing FNA techniques for TB lymphadenitis, both in mediastinal and extra-thoracic locations (28-31).

Minimally invasive bronchoscopic diagnosis of mediastinal tuberculous lymphadenitis may also be achieved with conventional (“Wang” needle) TBNA, though limited evidence suggest diagnostic sensitivity is significantly lower than for EBUS-TBNA, with reported composite diagnostic sensitivity in HIV-negative patients varying from 65% to 83% (17,32,33) though importantly culture-positivity was markedly lower at 9.5% to 27% (25,33). In addition, conventional TBNA remains underutilised because of inadequate training in the technique (34,35), and concerns regarding nodal movement with respiration (36), and risk of inadvertent vascular puncture (34). Competency may also take considerable time to achieve (34,37). We suggest therefore that both training and procedural outcome factors make EBUS-TBNA the preferable tool for bronchoscopic diagnosis of isolated mediastinal lymphadenitis.

Our study confirms that fine needle aspiration is a useful technique for the investigation of suspected TB lymphadenitis, and further demonstrates that this can be reliably accomplished via a bronchoscopic approach for the diagnosis of mediastinal TB lymphadenitis. For smear negative and extrapulmonary TB NAATs have high specificity but highly variable sensitivity ranging from 42% to 90% (38-42). We found a poor sensitivity (38%) for MTB NAAT in culture-confirmed TB lymphadenitis from EBUS-TBNA sampling, suggesting that culture is still a critical step in diagnosis. However, the rapid confirmation of the diagnosis using NAAT and the possibility for obtaining rapid genotypic susceptibility testing means that NAAT has an increasing role in both the diagnosis and initial management of TB patients.

This study is notable for a number of reasons. Firstly it was performed across four different tertiary teaching hospitals, with different patient demographics, demonstrating the technique is feasible amongst different patient populations. Secondly, we analysed all samples that were sent for mycobacteriology. Given the populations studied, results are likely to be representative of Australian and other Western health care facilities, (predominantly low TB prevalence communities with an incidence of less than 10 per 100,000, and with over 90% of patients being migrants from TB-endemic areas), our results are likely to be generalisable to most developed world patient populations.

This retrospective study has some limitations due to the inherent difficulty of assessing diagnostic tests in which the gold standard (a positive mycobacterial culture result) is an imperfect test. Culture-negative TB is a well recognised clinical entity, particularly in extra-pulmonary disease, and likely reflects differences in sample handling, sampling error, culture techniques, and mycobacterial load. It is possible that some of the patients in whom the post-procedural diagnosis was not TB may ultimately have gone on to develop this condition. However, given the risk of reactivation is greatest in the period shortly after initial infection (43) and given the patients were checked against a relevant TB registry at a median of 532 days after the procedure, we believe this is extremely unlikely. Conversely false positives may have occurred with false positive NAAT tests or as a result of incorrect clinicopathological diagnoses, resulting in unnecessary anti-tuberculous treatment and an underestimation of the sensitivity of this technique in providing a culture-proven diagnosis. It is also possible that a negative culture result from aspirated lymph nodes in patients with TB may not have represented a deficiency in the diagnostic process. Rather, such nodes may have been reactively enlarged secondary to parenchymal lung disease and this too may have reduced the observed sensitivity of the diagnostic technique.

Finally, caution should be exercised when interpreting the results of the NAAT. The test characteristics for TB PCR assays varies considerably between studies and is likely to be highly dependent on the particular assay used (40,44). Recent studies suggest that GeneXpert PCR may have superior sensitivity and specificity for the diagnosis of TB, although its use has not been validated for extra-pulmonary samples (45-48). This assay was not used during the period of our study.

These issues notwithstanding, the results in this study are consistent with the limited reports published previously, and therefore are likely to be reliable estimates of sensitivity and specificity for EBUS TBNA in the diagnosis of mediastinal TB lymphadenitis. Given the poor diagnostic yield from routine bronchoscopy in patients with isolated mediastinal lymphadenitis, EBUS-TBNA should be considered the procedure of choice for patients in whom TB is suspected.

EBUS-TBNA is a safe and well tolerated procedure in the assessment of patients with suspected isolated mediastinal lymphadenitis. The procedure shows a higher sensitivity (62%) for a culture-positive diagnosis of TB than historical reports of conventional TBNA. When culture and histological results are combined with high clinical suspicion, EBUS-TBNA demonstrates excellent diagnostic accuracy (98%) and NPV (98%) for the diagnosis of mediastinal TB lymphadenitis. We suggest EBUS-TBNA should be considered the procedure of choice for patients in whom TB is suspected.