Non-small cell lung cancer (NSCLC) is one of the leading causes of cancer-related deaths worldwide (1). Although recent advances in multidisciplinary therapies have improved treatment outcomes, the overall prognosis for NSCLC remains poor. Novel therapeutic strategies, including immunotherapy, are underwent investigation.

Programmed cell death 1 (PD-1) is a key immune checkpoint protein expressed on activated T cells and plays a crucial role in tumor immune escape (2-4). The ligand of PD-1, programmed cell death ligand 1 (PD-L1), which is upregulated in various types of cancers has been identified delivering negative costimulatory signals and suppressing lymphocyte function within the tumor microenvironment by engaging its receptor (5-7). Blocking the PD-1/PD-L1 pathway can enhance the anti-tumor activity of cytotoxic T cell in vitro (8,9). Furthermore, anti-PD-1 (10) and anti-PD-L1 (11) monoclonal antibodies have shown promising clinical activity in several malignancies, including NSCLC.

In previous phase I clinical trials, patients with NSCLC have shown durable and significant response to anti-PD-1 and anti-PD-L1 antibody. Studies also suggested that PD-L1 protein expression on cancer cells may predict favorable response to PD-1/PD-L1 directed therapy (7,10,12,13). However, there are finite and conflicting data on the prevalence and the prognostic role of PD-L1 expression in NSCLC. Whether discrepancy in these results is attributed to limited sample size or genuine heterogeneity is still confusing. A meta-analysis was carried out to evaluate the clinicopathological and prognostic significance of PD-L1 expression in patients with NSCLC.

A comprehensive literature search of electronic databases PubMed, Embase, Web of science and China National Knowledge Infrastructure (CNKI) was performed up to July 10, 2014. Studies were selected using the following search terms: “lung” and “cancer or neoplasm or carcinoma” and “PD-L1 or programmed cell death ligand 1”. All abstracts from the American Society of Clinical Oncology (ASCO) conferences held between January 2000 and June 2014 were also searched for relevant researches. The eligible reports were identified by two reviewers (Zhen-Kui Pan and Feng Ye), and controversial studies were adjudicated by a third reviewer (Jing-Xun Wu).

We collected all eligible articles about relationship between PD-L1 expression and clinicopathological features or clinic outcome of NSCLC in this meta-analysis. Studies meeting the following inclusion criteria were included: (I) PD-L1 protein expression evaluated in the primary NSCLC tissues; (II) research that revealed the relationship between PD-L1 expression and clinicopathological parameters or prognosis of NSCLC; (III) studies regarding the prognosis provided sufficient information to estimate hazard ratio (HR) about overall survival (OS) and 95% confidence interval (CI) ; (IV) if there were multiple articles based on similar populations, only the largest or the most recent article was included. The exclusion criteria included the following: (I) letters, reviews, case reports, conference abstracts, editorials and expert opinion; (II) patients had received previous chemotherapy or radiotherapy.

Two investigators (Feng Ye and Xuan Wu) independently extracted data from eligible studies. Disagreements were resolved by discussion and consensus. Two investigators reviewed all of researches that met inclusion and exclusion criteria. The following information was recorded for each study: name of the first author, year of publication, sample source, number of cases, detection methods, clinicopathological parameters, tumor node metastasis (TNM) stage, definition of PD-L1 positive, PD-L1 positive expression and patient survival. If the HR or standard errors (SE) were not reported in included studies, we calculate or estimate the HR from available data or Kaplan-Meier curves using the methods reported by Tierney et al. (14).

Two authors (Zhen-Kui Pan and Jing-Xun Wu) independently assessed the quality of all studies on the basis of a 9-scores system of the Newcastle-Ottawa Scale (NOS) (15). Discrepancies in the score were resolved through discussion between the authors. Each study included in the meta-analysis was judged on three broad perspectives: (I) the selection of the groups of study (four items, one score each); (II) the comparability (one item, up to two scores); (III) the ascertainment of either the exposure or outcome of interest (three items, one score each). A score presents a high quality choice of individual study.

Analysis was performed using the Stata 12.0 (Stata Corporation, Texas, US) and Review Manager 5.2 (Cochrane Collaboration, Oxford, UK). Comparisons of dichotomous measures were performed by pooled estimates of odds ratios (ORs), as well as their 95% CI. A P<0.05 was considered as statistical significance. Heterogeneity was tested using the Chi-square test with significance being set at P<0.10, the total variation among studies was estimated by I square. If there was heterogeneity among studies, we used a random effect model to pool the ORs; otherwise, a fixed effect model was selected. The potential for publication bias was assessed using the Begg rank correlation method and the Egger weighted regression method.

A total of 1,550 records were identified by the primary computerized literature search. After screening the titles and abstracts, 12 articles were further reviewed in detail. As indicated in the search flow diagram (Figure 1), nine studies (16-24) were finally included in the meta-analysis. 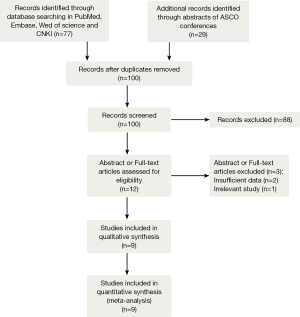 Nine studies published from 2004 to 2014 were eligible for meta-analysis. Their characteristics were summarized in Table 1. A total of 1550 patients from China, Japan, Greece and United States were enrolled. The study carried out by Velcheti et al. enrolled two cohorts of patients, including 340 cases from Greece and 204 cases from USA (21). PD-L1 protein expression was evaluated by the method of immunohistochemistry (IHC) and quantitative immunofluorescence (QIF). The definition of positive expression of PD-L1 varied among the studies. The expression of PD-L1 was found in 660 participants (42.6%). 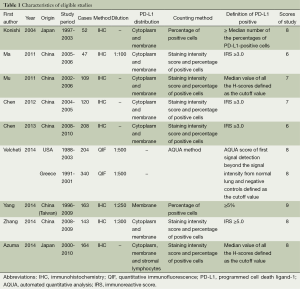 The study quality was assessed using the Newcastle-Ottawa quality assessment scale, generating scores ranging from 6 to 9 (with a mean of 7.4), with a higher value indicating better methodology. The results of quality assessment are also shown in Table 1. 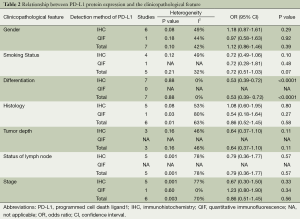 The association between PD-L1 expression and histological type of NSCLC was investigated in six studies. The outcomes were heterogeneous (P=0.01; I2=63%). Therefore, a random-effect model was used for the meta-analysis. PD-L1 expression was not significantly different between adenocarcinoma (AC) and squamous cell carcinoma (SCC) (AC vs. SCC, OR =0.86; CI: 0.52-1.45; P=0.58; Table 2).

PD-L1 as a prognostic factor for NSCLC

Seven out of the nine studies included have estimated the relationship between OS and PD-L1 expression. The pooled HR for OS showed expression of PD-L1 was adversely associated with the survival outcome of NSCLC (positive vs. negative PD-L1 expression, HR =1.47; 95% CI: 1.19-1.83; P=0.0004; Figure 2). Heterogeneity among the studies was not statistically significant (P=0.09; I2=45%). 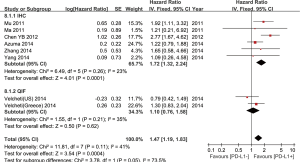 In subgroup analysis, the stratified group based on different detection methods revealed positive expression of PD-L1 by IHC was related to worse prognosis (HR =1.72; 95% CI: 1.32-2.24), but PD-L1 positivity by QIF alone could not show any predictive value (Figure 2).

Heterogeneity testing and publication bias analyses were performed among the studies based on detecting methods of PD-L1 expression. Egger’s and Begg’s test indicated no publication bias among these studies regarding HR about OS with P values of 0.764 and 0.657 respectively. The funnel plots were largely symmetric (Figure 3). 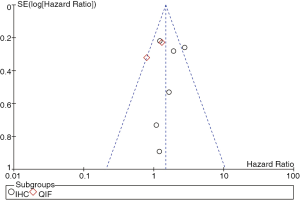 Though the using of modern therapeutic strategies have led to improved treatment outcomes, NSCLC has a 5-year OS rate of just 16% for all stage (25) and novel approaches of treatment are needed.

Advances in exploring the role of immune system in tumor immunosurveillance have resulted in the recognition that tumors can evade immune attack via the dysregulation of co-inhibitory or checkpoint signals. This has led to the development of a series of immunotherapeutic agents targeting the immune checkpoint pathway (26). Emerging data has demonstrated promising outcome of immunotherapy by anti-PD-1 and anti-PD-L1 antibody in NSCLC.

Several clinical trials of anti-PD-1 and anti-PD-L1 monoclonal antibody, including Nivolumab (BMS-936558, MDX-1106, ONO-4538) (10,27), Lambrolizumab (MK-3475) (13), MPDL3280A (12), BMS-936559 (11), and MEDI4736 (28), have reported durable clinical activity in NSCLC with tolerable adverse events. Besides, the studies also revealed that expression of PD-L1 protein in tumor cell may predict the treatment outcome (7,10,12,13). Investigating the association of PD-L1 protein expression with clinicopathoological parameters and prognosis will help the further research on PD-1/PD-L1 pathway inhibitor in NSCLC.

The correlation between PD-L1 expression and NSCLC has been studied by many studies. However, the results were inconsistent and conflicting. For procuring a reasonable conclusion, we combined 9 eligible studies including 1,550 cases to perform this meta-analysis.

In six previous studies with 1,127 NSCLCs (17-19,21,23,24), PD-L1 expression was considered a prognostic factor for OS. The result of five studies (17-19,23,24) indicated PD-L1 expression is a risk factor for poor OS, which was different from the remaining one (21), in which 544 patients from two cohorts were included. Although the ultimate effects of PD-L1 signaling in the tumor are not completely understood, it is commonly believed that PD-L1 expression in tumor cell would weaken their immunogenicity, inhibit immune response cells, induce apoptosis of tumor antigen-specific T lymphocytes, decrease TCR mediated proliferation and cytokine production, down regulate the function of T cells, and lead to immune escape and tumor progression (5,29-34). On the other hand, some researchers postulated that PD-L1 expression highlights the existence of antitumor responses as well. Even though the resistance mechanisms will finally allow tumor cells to survive, tumor growth may still be partially inhibited and lead to better survival than patients with little antitumor responses (35). Whereas the conflicting data were presented by former studies, the pooled HR showed a remarkable negative correlation between PD-L1 expression and survival in our meta-analysis.

Stratified data based on the detection methods of PD-L1 expression were analysised in our research. The relationships of PD-L1 expression and clinicopathological characteristics (gender, smoking status, histological type, invasive depth of tumor, status of lymph node metastasis and TNM stage) were not different between two subgroups. However, analysis suggested the prognosis was only associated with positive expression of PD-L1 by IHC, but not with that by QIF. IHC and QIF were both antibody-based detection methods widely used in conventional researches of protien exprssion, but the definition of PD-L1 positivity by these two methods were different. Researches by IHC defined positive PD-L1 expression by staining intensity score and percentage of positive cells. Whereas, positive PD-L1 expression by QIF was defined by signal intensity. Discordant results may attributed to different definition of positive PD-L1. Besides, diverse antibody used in the studies may also lead to inconsistent results.

Efforts were made to conduct a comprehensive analysis, but some limitations still should be acknowledged. First, the detecting and evaluating method of PD-L1 protein expression was not well defined. PD-L1 positivity was judged by different antibodies and assays according to various criteria. Second, the survival analysis was not performed by multivariate analyses in most studies reported; we calculated or estimated some of the HRs from available data or Kaplan-Meier curves. Third, six out of eight included studies were hold in china and only one included study was carried out in the western country. The results need to be confirmed in a wider range of population. Fourth, the number of studies included is relatively small.

Our meta-analysis indicated PD-L1 protein expression was not associated with common clinicopathological characteristics of NSCLC, including gender, smoking status, histological type, invasive depth of tumor, status of lymph node metastasis and TNM stage, except for tumor differentiation. It was a poor prognostic biomarker for NSCLC. Further large-scale clinical studies should be performed to investigate the precise clinicopathological and prognostic significance of PD-L1 in NSCLC under uniform testing standard.