Continuous positive airway pressure (CPAP) therapy is generally considered as the first-choice treatment for OSA, providing air pressure support to the upper airway (UA) lumen to relieve collapse. As a result, CPAP has been shown to improve sleepiness, increase quality of life (QOL) and decrease comorbidities (11-13). However, 46–83% do not tolerate CPAP or present an inadequate adaptation to it (14), and surgery is a reasonable and necessary alternative therapy. Uvulopalatopharyngoplasty (UPPP) was initially performed by Ikematsu (15) in 1952 for snoring, and introduced for OSA by Fujita (16), and still is the most commonly performed surgical procedure, however, its “success rate” or “response rate” has been described as limited and variable, ranging from 36% (17) to 78% (18) based on greater than 50% apnea hypopnea index (AHI) reduction and post-surgical AHI less than 20 (19). UA pressure measurements and endoscopy findings showed that patients with hypopharyngeal obstruction had a high percentage of relapses (20,21).

The Friedman staging system has been described as a simple and effective method to predict surgical outcomes according to the tongue-palate position relationship, tonsil size, craniofacial anatomy and body mass index (BMI) (22,23). It has been shown that hypopharyngeal obstruction, and therefore worse surgical outcomes for palatal surgery was associated with increase in staging, with 80.6% to stage I to 37.9% in stage II and 8.1% to stage III, respectively (24). A similar result was also described by Li et al. with a 96% UPPP successful rate in stages II vs. 65% in stage III (25). Although stage III subjects are thought to have less UA volume than stage II and higher proportion of retroglossal obstruction by pressure manometry (26), detailed differences about collapse characteristics across stages were not described in previous studies and need to be further explored.

Drug-induced sleep endoscopy (DISE) can be useful to evaluate obstructive airway characteristics during sleep (27) and its repeatability (28) and reliability (29,30) have been extensively described. Moreover, DISE has been more sensitive in finding hypopharyngeal collapse compared to awake endoscopy (31-33). To our knowledge, there are no studies assessing UA obstruction characteristics of different Friedman stages based on DISE. The objective of this study is to compare Friedman’s stages II and III and DISE findings in patients with OSA, therefore helping in fulfill an important knowledge gap on the correlation between awake and sedated UA examination.

The trial was conducted in accordance with the Declaration of Helsinki and the Harmonized Tripartite Guideline for Good Clinical Practice from the International Conference on Harmonization. This study was reviewed and approved by the Institutional Review Board and Hospital Research Ethics Committee of Stanford Hospital and Clinics (approval number 35054). All patients enrolled completed the informed consent form.

Sleep studies were scored in accordance to the American Academy of Sleep Medicine 2012 edition. Apnea was identified when the amplitude of the airflow decreased ≥90% for ≥10 seconds. Hypopnea was identified when airflow amplitude decreased ≥30% for ≥10 seconds and was associated with oxygen desaturation ≥3% or an arousal. ODI represented the number of events of oxygen desaturation ≥3% per hour. LSAT represented the lowest oxygen saturation during sleep.

The patients were placed in supine position in the operating room. Nasal decongestion oxymetazoline and topical lidocaine gel was applied to nasal valve area prior to endoscopy. Dexmedetomidine was the sedative agent, administered with an IV bolus at 1.5 mcg/kg over 10 minutes, followed by a maintenance infusion rate of 1.5 mcg/kg/h (34). An Olympus® flexible endoscope with a 3.2-mm diameter was inserted into the nose, UA obstructive subsites of velum (V), oropharynx (O), tongue (T), epiglottis (E) and levels of upper: velum and/or oropharynx (V/O); lower: tongue base and/or epiglottis (T/E); combined: V/O + T/E were observed. The assessment began after the first cycle of snoring and obstruction completed. The cycle is here defined as a complete and stable sequence of snoring-obstructed breathing, or desaturations. At least 2 cycles of obstructed breathing were observed for each subsite, as recommended by the European position paper on DISE (35). The duration of evaluation was 15 to 20 minutes. The grade and patterns of UA collapse were described by Velum oropharynx tongue base epiglottis (VOTE) classification (36). All evaluations were performed and classified exclusively by a senior and experienced surgeon (R.C).

The study assessed 193 records. Eighteen patients were excluded as they underwent prior surgical procedures for OSA. Baseline characteristics including age, BMI, ESS, AHI, ODI, LSAT were compared across groups and no significant differences were found as shown in Table 1.

Collapse pattern and obstruction degree in VOTE showed no significant difference between the two groups; there was no significant association between stage II or III, obstruction sites, single or multiple sites obstruction, isolated or combined levels obstruction, in either unadjusted or adjusted logistic regression models, for partial or complete collapse (Tables 2,3).

There was a significant higher proportion (74.5%) of more than 2 obstructive sites in stage III patients than in stage II patients (57.5%), P=0.022 (Figure 1). However, there was no significant difference in the distribution of obstruction levels between the stages as shown in Figure 2. 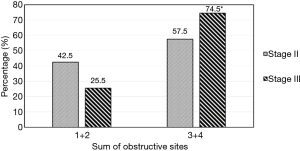 Figure 2 Comparison of upper level, lower level and combined obstruction between groups. Seventy-one percent patients in stage II presented combined obstruction with partial and complete collapse, and 81% in stage III. V + O + T was the most multi-sites obstructive pattern in both groups with 33% and 37%, respectively. There was no significant difference on obstructive level between groups, statistical analysis by Fisher exact test, P=0.301. Upper level: velum and/or oropharynx (V/O); lower level: tongue base and/or epiglottis (T/E); combined: V/O + T/E. Statistically significant as P<0.05.

One-hundred and six patients underwent surgery after DISE and 33 patients had a post-surgical sleep study between 3 to 6 months that were available at the time of this study. No significant difference was found in baseline characteristics, pre- and post-surgical sleep study outcomes, surgical response rate between groups (Table 4). The same can be seen in relation the surgical procedures performed across groups (Table 5). 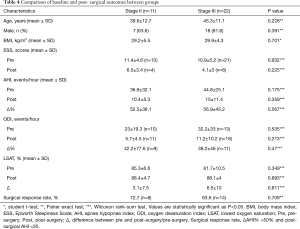 In this study, DISE was used to explore the UA obstructive features in Friedman's stages II and III. To our knowledge, no articles were published to analyze the correlation between DISE findings and Friedman staging. The main finding in this study was that stage III patients had a significantly higher proportion of more than 2 obstructive sites when compared to stage II patients. Most patients presented upper and lower level combined obstruction in both stage II and III, V + O + T was the most verified association. Surgical procedures based on DISE assessment could obtain similar success rate in both stage III and stage II patients.

The main difference between stages was that stage III subjects were more susceptible to more than two obstructive sites, with increased severity of hypopharyngeal obstruction, contributing to lower success rates than stage II. Meanwhile, there was a higher proportion of lateral wall narrowing in stage II (67.1%) and III (79.4%) compared to the general OSA population (35%) (39). This likely contributes to a lower surgical success rate to soft tissue procedures in this sub-population by non skeletal procedures (40,41), however surgical responses and results may be better through maxillomandibular advancement (MMA) (42). In our experience, simultaneous hypopharyngeal procedures are considered based on DISE findings to improve surgical results. MMA was considered thoughtfully if hypopharyngeal lateral wall collapse is observed.

Some studies concluded that it was unnecessary to perform DISE since there would be no significant outcome difference between all-sites and partial-sites surgical intervention (43,44), but DISE revealed more multiple sites obstruction and pharyngeal lateral wall collapse in high AHI patients (37,45,46). Spector et al. found 70% success rate in stage II and 66% in stage III through multilevel surgeries by DISE directions (47).

Other studies did not find the relationship between Friedman stage and incidence of retroglossal collapse (48,49). Similarly, the association between high FTP and tongue base obstruction was not found either (50,51). Our results showed that either retroglossal or retropalatal, oropharyngeal and epiglottal collapse had no significant association with stages II or III. Therefore, while Friedman staging may be a primary method for judging the severity of collapsibility, DISE provides additional evaluation with more information identifying the obstructive characteristics of the patient with OSA.

One limitation of this study was that most subjects of stage II were classified as IIa (86.3%). In general, patients with tonsils 3 or 4 were seldom performed DISE prior to surgery, according to the protocol used by our department. It is known that cases with higher amygdala grade in general have a positive correlation with higher AHI and higher success rate (52-54). In addition, the subjects who were from sleep clinic and CPAP intolerant and sought for possible surgical therapy may have increased our selection bias. Besides that, DISE findings also altered with type (55), depth (56) and duration of sedation (57), the protocol that we used only applied dexmedetomidine, thus not allowing comparison with other studies using different drugs.

Upper and lower combined obstruction was the main collapse characteristic in both groups. Friedman stage III subjects had more than 2 sites of obstruction when compared to stage II patients. No differences were identified for the degree and form of obstruction between stages II and III.

Conflicts of Interest: All authors have completed the ICMJE uniform disclosure form (available at http://dx.doi.org/10.21037/jtd-20-1471). The authors have no conflicts of interest to declare.

Ethical Statement: The authors are accountable for all aspects of the work in ensuring that questions related to the accuracy or integrity of any part of the work are appropriately investigated and resolved. The trial was conducted in accordance with the Declaration of Helsinki (as revised in 2013) and the Harmonized Tripartite Guideline for Good Clinical Practice from the International Conference on Harmonization. This study was reviewed and approved by the Institutional Review Board and Hospital Research Ethics Committee of Stanford Hospital and Clinics (approval number 35054). All patients enrolled completed the informed consent form.