Pulmonary hamartoma (PH) represents a very rare form of resected benign neoplasm of the lung in thoracic surgery (1). It is usually located in the periphery of the lung and ranges in size from 1 to 20 cm in various series (2,3). The management of this entity depends on the size, anatomic distribution, and growth rate of the tumor, as well as the patient’s clinical presentation. Most PHs can be removed by enucleation, wedge resection, or lobectomy (2,4,5). Pneumonectomy should be considered, however, in rare cases when a huge tumor invades into the hilum (6), and coexists with anomalous pulmonary vessels. We herein present an extremely unusual case of giant PH coexistent with an anomalous common pulmonary venous trunk (ACPVT) successfully resected by pneumonectomy.

An asymptomatic 39-year-old male ironsmith was admitted to our hospital for evaluation of a giant pulmonary lesion on the left side that had been detected on chest X-ray performed during a medical screening. He was a non-smoker, and reported no cough, hemoptysis, chest pain, weight loss, or fever. For further evaluation, computed tomography (CT) scan was performed and it demonstrated a large multiseptated cystic and solid mass extending from the apex of the left lung to the level of the left diaphragm (Figure 1A). Left pulmonary artery and left main bronchus were surrounded by the mass. Bronchoscopy showed external compression of the lobar bronchus with no endobronchial abnormality. CT guided fine needle aspiration cytology (FNAC) on the mass was performed, which showed predominantly chondromatous matrix with inflammation of bronchial epithelium. There was no evidence of malignancy. His past history revealed hospital admission elsewhere for duodenal ulcer through subtotal gastrectomy 6 years ago, when chest radiograph showed nothing abnormal. His general condition was good. Pulmonary function tests showed moderate mixed ventilatory limitation (FVC: 2.45 L; %FVC: 68.4%; FEV1: 2.09 L; %FEV1: 68.7%; FEV1/FVC: 85.3%; VC: 2.67; %VC: 70.9%; TLC: 4.97; %TLC: 93.4%), which was not a contraindication to lobectomy or even pneumonectomy. Thus, an operation was planned for definitive diagnosis and treatment. 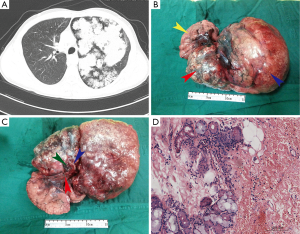 A left exploratory thoracotomy was performed through the fifth intercostal space, where a bulky, hard centrally located mass with a maximal diameter of 28 cm was encountered. It was covered with unsmooth visceral pleura and occupied almost the whole left thorax. The total upper lobe and the superior segment of the lower lobe were displaced (Figure 1B). The hilar structures were all surrounded by dense tumor tissue (Figure 1C), and the oblique fissure was also fused and impossible to be divided by sharp or blunt dissection (Figure 1C), making it necessary to carry out a pneumonectomy to accomplish radical resection. To remove the tumor, the incision had to be extended. The upper half of the giant tumor was lifted up out of thorax to facilitate the exposure of pulmonary hilum. During dissection of hilar structure, only one branch of left pulmonary vein was encountered, which was identified as an ACPVT. Then the pulmonary artery, main bronchus and common pulmonary vein were dissected in sequence.

Pathologic examination of the specimen revealed a bosselated and gray-white mass, 28 cm × 18 cm × 17 cm in size and 2.1 kg in weight, which was composed of multiple, small, lobulated, pale, irregular pieces of tumor that tended to fall apart. In the hilum, only one branch of pulmonary vein was seen (Figure 1C). Histologic sections revealed a blend of pieces of rounded cartilage separated by fibrous bands in which mature adipose tissue and cleft-like structures lined, and no sign of malignancy was observed (Figure 1D). Based on the histopathological findings, the patient was diagnosed as PH.

Given the high risk of pulmonary arterial embolism (PAE) following pneumonectomy, subcutaneous injection of low-molecular-weight heparin (2050 AXaIU once daily, 1 week) was used to prevent this potential complication. Postoperative recovery was rapid and uneventful. The patient was discharged on the 7th postoperative day. His pulmonary function examined 4 months after surgery was slightly impaired: FEV1 1.77 L (61.8% predicted), FVC 2.16 L (64.7% predicted), FEV1/FVC 81.9%, TLC 4.65 (93.3% predicted). There was no evidence of recurrence or complications during the 10-month follow-up period.

PHs are rare benign neoplasms of the lung with an estimated incidence of 0.025-0.32% (1). The size of these lesions may range from 1 cm to larger than 20 cm in the greatest dimension, but is usually less than 4 cm (2,4). Giant PHs are extremely unusual. A literature search revealed that this is the fifth case reporting a giant PH measuring more than 25 cm in size (4,5,7,8). In the current case, the tumor measured 28 cm × 18 cm × 17 cm, surrounded the hilum of the lung, and penetrated the interlobar fissure, thus engendered great difficulty in resecting the lesion. Furthermore, it coexisted with an ACPVT (Figure 2). This, to our knowledge, is the first report of a PH showing such a growth tendency and anatomical characteristic. 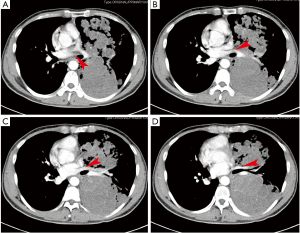 Management of PHs should be individualized according to tumor size, anatomic distribution, growth rate, as well as the performance status of the patient. For asymptomatic and slowly growing lesions less than 2.5 cm in diameter, recommended treatment is usually conservative with regular chest roentgenograms during the follow-up (9). While for endobronchial, huge and fast growing lesions, tumor resection is advocated (9). Although surgical enucleation, wedge resection, and lobectomy are usually possible with most PHs, pneumonectomy is the treatment of choice for some exceptional lesions (6). As for our case, the tumor was large and close adhered to the pulmonary hilum, as well as invaded the oblique fissure. In addition, there coexisted an ACPVT. As a consequence, anatomic lobectomy or sleeve lobectomy was not feasible, but required pneumonectomy. Notably, radical and complete resection is emphasized, when cardiopulmonary function and other physical status are not contraindications for extensive resection, because of the risk of recurrence (10).

An ACPVT is the presence of a single pulmonary vein draining the ipsilateral lung with an incidence of 23.9% (11). This anatomic variation is not rare, and usually incidentally found on imaging studies or lung surgeries. Especially when coexisting with a giant centrally located lung mass, it may be transected by accident, and cause lethal complications during pulmonary resection due to the poor exposure. When dealing with a huge pulmonary tumor, skin incision and exposure of anatomical structures become more limited. Surgeons may concentrate on this, while overlooked the existence of an ACPVT. Therefore, identification of an ACPVT is crucial for safe surgery, as well as the avoidance of postoperative morbidity. Several previous studies had reported ACPVT incidentally injured when performing lobectomy. In some of these cases, it was realized promptly that the transected vessel was the common trunk, and reanastomoses were successfully accomplished during surgery (12,13); in others, there were no choices but to perform pneumonectomy (14). For our patient, because we had decided to perform pneumonectomy soon after exploratory thoracotomy, the ACPVT, incidentally found during dissecting the pulmonary vessels, had not caused a surgical morbidity. However, the importance of identifying an ACPVT preoperatively is emphasized, particularly when confronted to uncommon and complex pulmonary neoplasms such as a giant PH. Thoracic surgeons should keep such variation in mind and pay close attention to dissection of the pulmonary veins to avoid complications.

Finally, our case also emphasizes the importance of anticoagulant therapy, especially in high-risk patients, to prevent PAE, since PAE has long been noted as a common cause of mortality following pneumonectomy (15). Minimizing the size of the arterial stump would prevent this complication (16). Postoperative D-dimer and contrast-enhanced CT are valuable for early diagnosis, and small dose of low-molecular-weight heparin is useful and recommended to prevent PAE after pneumonectomy (17).

Giant PHs as described in the present case are rare, coexistence with an ACPVT are extremely rare. For these cases, anatomic lobectomy or sleeve lobectomy may be the operation of choice, though pneumonectomy represents alternative surgical approach in exceptional and complex cases.