Multimodal and palliative treatment of patients with pulmonary metastases

Since many tumors involve the lung for distant spread, pulmonary metastasectomy has become an important part of the daily practice of a thoracic surgeon (1). According to the database annual report of the European Society of Thoracic Surgeons, pulmonary metastases accounted for 11.2% of all resected lung pathologies in 2019 (2). Since no randomized clinical trials exist on the topic, case selection as well as surgical practice is based on observational studies published during the last decades. However, the overall survival can be improved after pulmonary metastasectomy in carefully selected patients (1). The aim of this review article is to give an overview and to help thoracic surgeons in the treatment of patients with pulmonary metastases.

There are many considerations in the discussion about the surgical approach for pulmonary metastasectomy. Minimally invasive approaches might be useful in reducing pleural adhesions and shortened postoperative recovery and can therefore be a valid choice for selected patients (3). On the other hand, small lesions might be missed since bimanual palpation of the lung it is not possible in the minimally invasive setting (4,5). Therefore, in patients with multiple metastases and metastases deeply embedded within the parenchyma, thoracotomy should still be recommended to achieve complete resection (3).

The surgical approach for bilateral pulmonary metastases should also be chosen depending on number, size and location of the metastases. One- or two-staged bilateral thoracotomy might be the most frequent approach performed in patients with multiple bilateral metastases. Two-staged surgery should be preferred in patients with limited lung function. A further advantage for staged surgery is that it allows a period of observation and provides control on a significant progression. After about 4 weeks of recovery, a re-CT should be performed followed by the second stage surgery (6). The midline sternotomy can provide access to both lungs and avoid a second surgery, but limits the access to posterior parts of the lungs. The clamshell incision has also been described as a possible approach for bilateral metastasectomy (7).

There is not much evidence on the choice of the side which is opened first, when it comes to two-staged surgery. On one hand, it can be argued that the side with the greater number of metastases or tumor mass should be opened first (6). The reason could be to find out, whether it is possible to achieve a complete resection and, if not, to avoid the unnecessary contralateral surgery. But it can also be argued that to start with the side of less tumor mass makes it possible for the patient to recover faster and to preserve more lung function for the second surgery.

The indications as well as decision about surgical approach for repeated pulmonary metastasectomy are identical to the indications for the initial operation. Furthermore, a careful preoperative evaluation of the residual lung capacity is important in patients with residual pulmonary metastases. Multimodal treatment including preoperative chemotherapy should also be discussed (8).

The objective of resection of pulmonary metastases is to remove all tumor while preserving as much normal pulmonary parenchyma as possible and reduce invasiveness. Most nodules can be completely removed by wedge resection using a stapler. Metastases located in areas of the lung where a stapler cannot be applied like nearby bronchi or blood vessels can be excised by laser (Figures 1-3) (9). Wedge resection should be performed as carefully as possible to avoid local recurrence after pulmonary metastasectomy. The width of surgical margins should be decided according to the microscopic spread of satellite tumor cells. The risk of local recurrence at the surgical margins is higher after resection of metastases from colorectal cancer. Since wider safety margins can prevent local recurrence, they should be half of the diameter of the metastasis or 8 mm in metastases from colorectal cancer that are 12 mm or more (10,11). 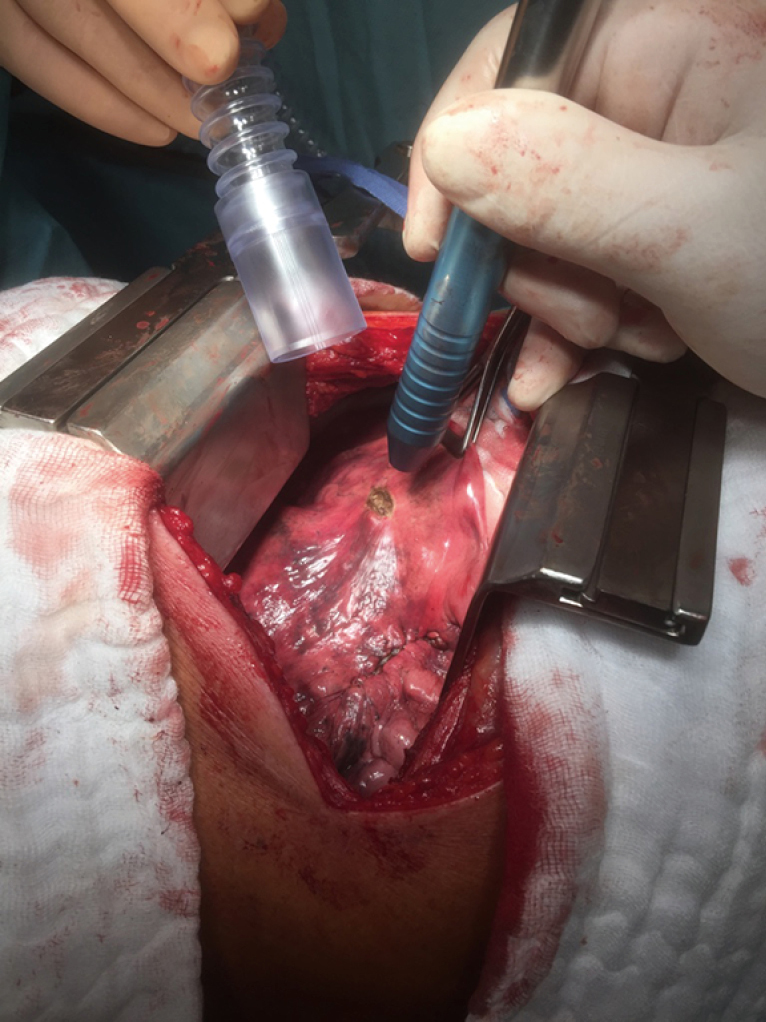 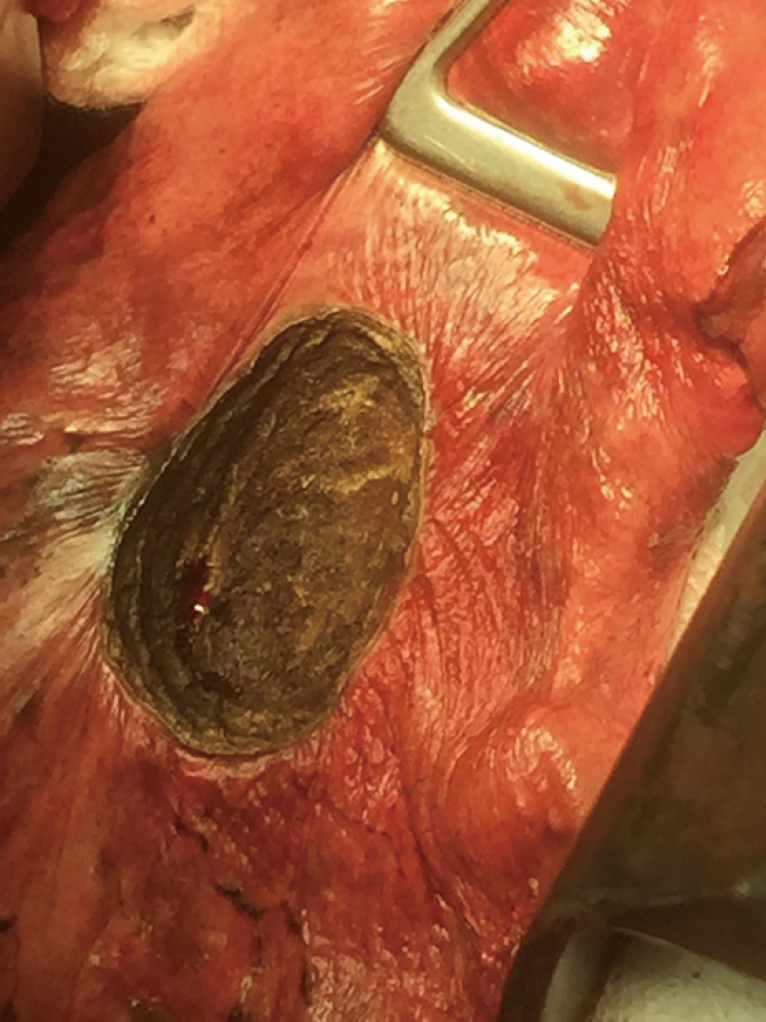 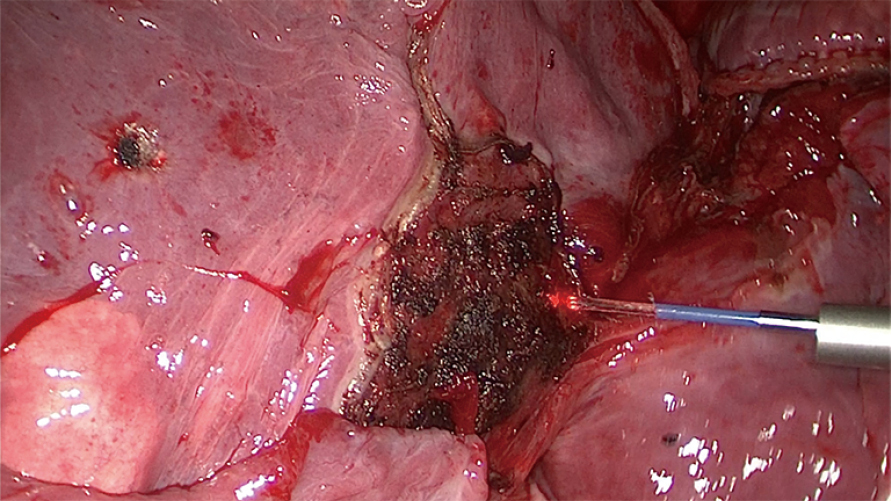 Any indication for pulmonary metastasectomy as well as systemic therapy or local measures should be discussed multidisciplinary to achieve a survival benefit for the patients. For some years now, systemic therapy includes immunotherapy and targeted therapies for some diseases. Response to immunotherapy can be prolonged, but only in approximately 20% of the patients. On the other hand, response to targeted therapies is more common, but of shorter duration (3).

Nonsurgical local treatment options for pulmonary metastases include thermal ablation techniques and stereotactic ablative body radiation (SABR). Thermal ablation techniques include microwave, cryotherapy and radiofrequency ablation (RFA). These nonsurgical treatment modalities are reasonable therapy for medically inoperable patients or high-risk for resection (3). Tumor size is an important factor when using RFA. Pulmonary metastases larger than 2–3 cm leads to poorer survival (12,13). SABR can have an adverse impact on the lung function. On the other hand, SABR should be preferred for metastases larger than 3 cm in inoperable patients (3,12).

Metastases of renal cell carcinoma (RCC) do not respond well to chemotherapy or radiotherapy (21). It would therefore be advisable to offer surgery to patients with potentially curative renal cell carcinoma with metastases. Consequently, resection must be as complete as possible. Intrathoracic lymph node metastases with or even without pulmonary metastases can occur in up to 47% of RCC patients. Therefore, complete resection should include a systematic lymphadenectomy to achieve a better loco-regional control (22,23).

Resection of residual tumor after chemotherapy in patients with nonseminomatous germ cell tumors of testicular origin is established in the interdisciplinary concept of oncologic therapy. The serum tumor markers α-fetoprotein, β-human chorionic gonadotropin and lactate dehydrogenase are reliable parameters for diagnosis and follow-up of the disease. Residual tumor in the lung should be removed in patients with complete serologic response after platin-based chemotherapy and residual masses of 1 cm or more in diameter. Other indications include lack of response to chemotherapy, response and then recurrence while on chemotherapy and recurrence after first line and second line platin-based chemotherapy, if applicable, including high-dose chemotherapy with autologous stem cell transplant (24-27). Lymph node dissection should be performed during pulmonary metastasectomy to achieve a complete resection and because of possible different histological differentiation (17).

Sarcoma is a rare tumor consisting of a heterogeneous group of histologic subtypes with a propensity to metastasize to the lungs. Since the response rate to chemotherapy is poor, pulmonary metastasectomy for sarcoma is an established treatment option in the multimodal therapy concept. Sarcoma tends to recur in the lung and can make it necessary to repeat the metastasectomy. But complete resection of pulmonary metastases can result in long-term survival in selected patients, even after repeated metastasectomies (17,28). Lymph node dissection should be performed during metastasectomy of soft tissue sarcoma. Lymphadenectomy for patients with osteosarcoma is not recommended (17).

A primary lung squamous cell carcinoma and lung metastasis of a head and neck squamous cell carcinoma are difficult to differentiate histopathologically and can lead to selection bias. Therefore, solitary lung tumors should be treated analogous to primary lung cancer. Metastases of head and neck tumors can be considered for pulmonary metastasectomy considering general suggestions for pulmonary metastases (3,17,29).

Surgery is traditionally considered appropriate treatment for local, locoregional or oligometastatic disease, and has been primarily used curative intend treatment. Contrary, the goal of palliative pulmonary metastasectomy is to control possibly life-threatening and/or quality-of-life-impairing signs and symptoms, as well as to prolong life whenever possible. Possibly life-threatening situations are as follows:

Pulmonary metastasectomies for curative intent can be carried out, if following conditions are fulfilled: local control of primary tumor, complete resections of all thoracic metastases possible, no extrathoracic metastases or can be controlled by surgery or other modalities, no alternative treatment options with lower morbidity available and adequate performance status and cardiopulmonary reserve. Minimally invasive approaches can be a valid choice for selected patients. On the other hand, in patients with multiple metastases and metastases deeply embedded within the parenchyma, thoracotomy should still be recommended to achieve complete resection.

Conflicts of Interest: The authors have completed the ICMJE uniform disclosure form (available at http://dx.doi.org/10.21037/jtd-2019-pm-09). The series “Pulmonary Metastases” was commissioned by the editorial office without any funding or sponsorship. SB serves as an unpaid editorial board member of Journal of Thoracic Disease. The authors have no other conflicts of interest to declare.

Ethical Statement: The authors are accountable for all aspects of this work in ensuring that questions related to the accuracy or integrity of any part of this work are appropriately investigated and resolved.