As it has been well described in the literature, complete (i.e., R0) resection is of great importance in the treatment of thymic tumors (1). Thymomas are usually well capsulated and resectable without a need for resection of adjacent structure. However, extended thymectomy is advised due to the possibility of thymoma foci in the anterior mediastinal compartment (1). Other than stage IVB tumors (i.e., tumors with deep region lymph node metastasis or distant metastases including pulmonary metastases) tumors are considered resectable.

The therapeutic role of debulking surgery or subtotal/incomplete resection in stage III and IV disease has been controversial (1,2). It has been shown that, 5-year survival rate varies between 60% to 75% after incomplete resection and 24% to 40% after incisional biopsy alone (2-4). Radiotherapy after incomplete resection of thymic tumors provides local control rates of 35% to 74% and 5-year survival rates of 50% to 70% for stage III, 20% to 50% stage IVA tumors (4,5). Ciernik et al. reported that, tumor debulking did not improve prognosis when followed by radiation (6). They reported that stage III patients had a 5- and 10-year rates of 61% and 57% respectively, whereas 5- and 10-year survival rates of patients with stage IV disease 23% and 8%, respectively (6).

In essence, multidisciplinary approach to thymic tumors aims to improve the resectability and survival.

Stage III thymic tumors demonstrate tumoral involvement into adjacent structures such as phrenic nerve, pulmonary parenchyma, great vessels such as brachiocephalic vein and superior vena cava and pericardium. In patients with Stage IVA tumors, pleural or pericardial tumoral implants or large tumors with non-discrete tumoral invasion can be seen (Figure 1). In these tumors, transthoracic tru-cut biopsy or mediastinotomy under local anesthesia is recommended since the patient can not be extubated due to extensive tracheal compression if a standard mediastinotomy is performed. Despite the fact that, most Stage III tumors can be resected with adjacent structures in the concept of ‘extended thymectomy’, induction therapies may increase the likelihood of complete resection (5,7-12). However, some of the patients with stage III tumors can be deemed as inoperable due to the extension and/or localization of the tumor. 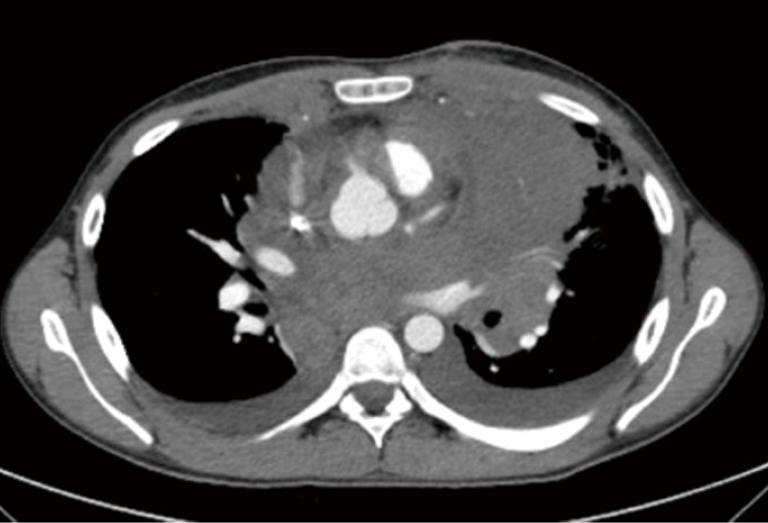 For the stage III-IVA tumors, the standard approach should be obtained by a multidisciplinary team including thoracic surgeon, radiologist, pathologist, medical oncologist, radiation oncologist. In institutions where there is no multidisciplinary team, virtual tumor board with the help of online communication tools is recommended (The International Thymic Malignancy Interest Group. https://www.itmig.org). In patients who were deemed not to be a margin-negative surgical resection candidate, an induction chemotherapy can be applied (1,5,7-12).

For patients with locally advanced thymic tumor a complete radiologic staging that include a thin-sliced chest CT with contrast and PET-CT should be performed. Chest MRI is not recommended unless there is a vertebral invasion since MRI may exaggerate the invasion to great vessels and it may indicate inoperability in operable patients. In all patients with locally advanced thymic tumor a tissue diagnosis using tru-cut biopsy or mediastinotomy or extended mediastinoscopy should be obtained (13). A very widely mentioned dogma appoints a biopsy of possible thymic tumor out of regard of seeding in parietal pleura or biopsy site (14). No patient of seeding of a needle tract or biopsy area has never been reported. On the contrary, a trend to better survival who had undergone a preoperative biopsy was reported (15).

If a surgical margin-negative (R0) is deemed to be possible, tumor can resected by sternotomy with additional resection of pericardium, superior vena cava, innominate vein (Figures 2,3). There is a strong need for appropriate communication with pathologist in order to evaluate the resected specimen properly. Surgeon should show to pathologist the 4 horns of the tumor, pericardial and venous (vena cava superior or left/right innominate vein) surgical margins in detail. For locally advance tumor with adjacent tissue invasion, postoperative radiation treatment (PORT) is recommended if resection margins are close or positive. It has been shown that, especially the patients with thymic carcinomas may benefit from PORT (16). 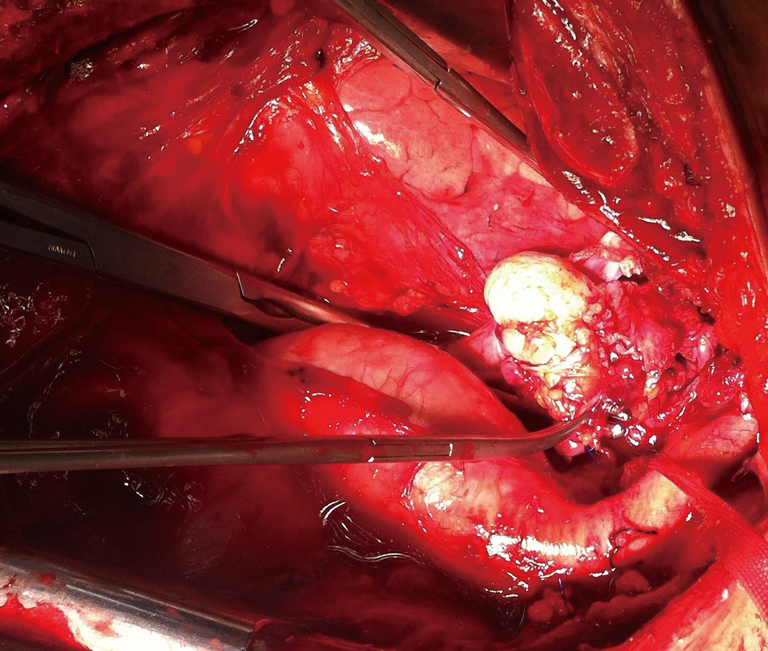 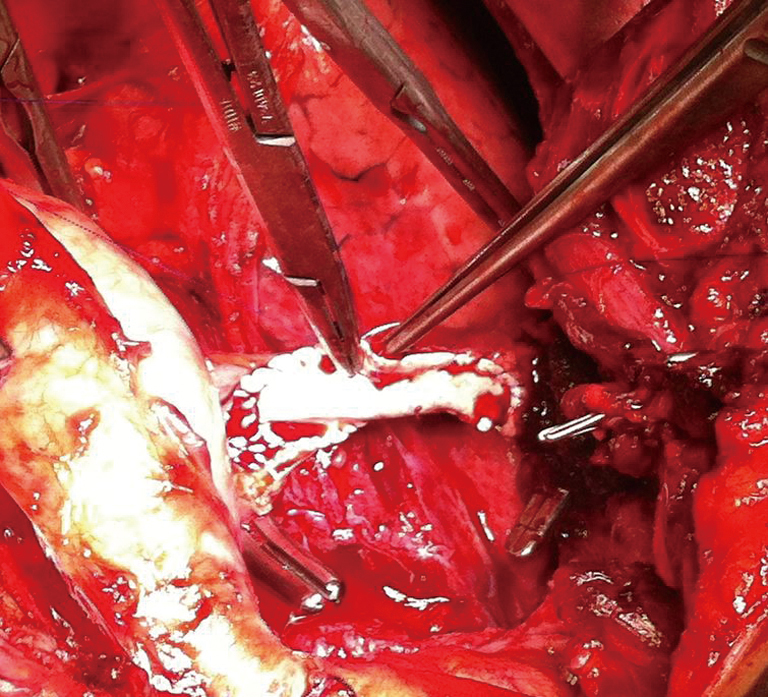 Figure 3 Picture shows the intraoperative view of an extended thymectomy via sternotomy in addition to vena cava superior resection + reconstruction were performed.

Thymomas are considered to be chemosensitive tumors and a variety of combinations of chemotherapy (Figure 4). 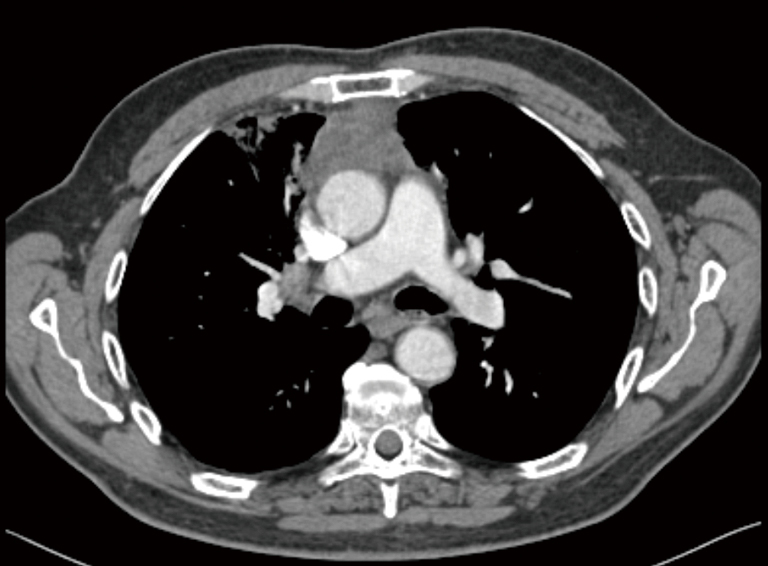 Figure 4 Thoracic CT shows stage III type B3 thymoma was evaluated to be marginally resectable in a 73-year-old male patient. He then underwent extended thymectomy followed by neoadjuvant taxol + carboplatin.

In the published studies regarding induction therapy of thymoma, clinical response rate varied between 62% to 100% and complete resection rates of 22% to 92% (Table 1). However, it should be emphasized that, there is no high-level evidence presenting randomized trial. The used regimen usually included cisplatin, cyclophosphamide and cyclophosphamide (CAP). 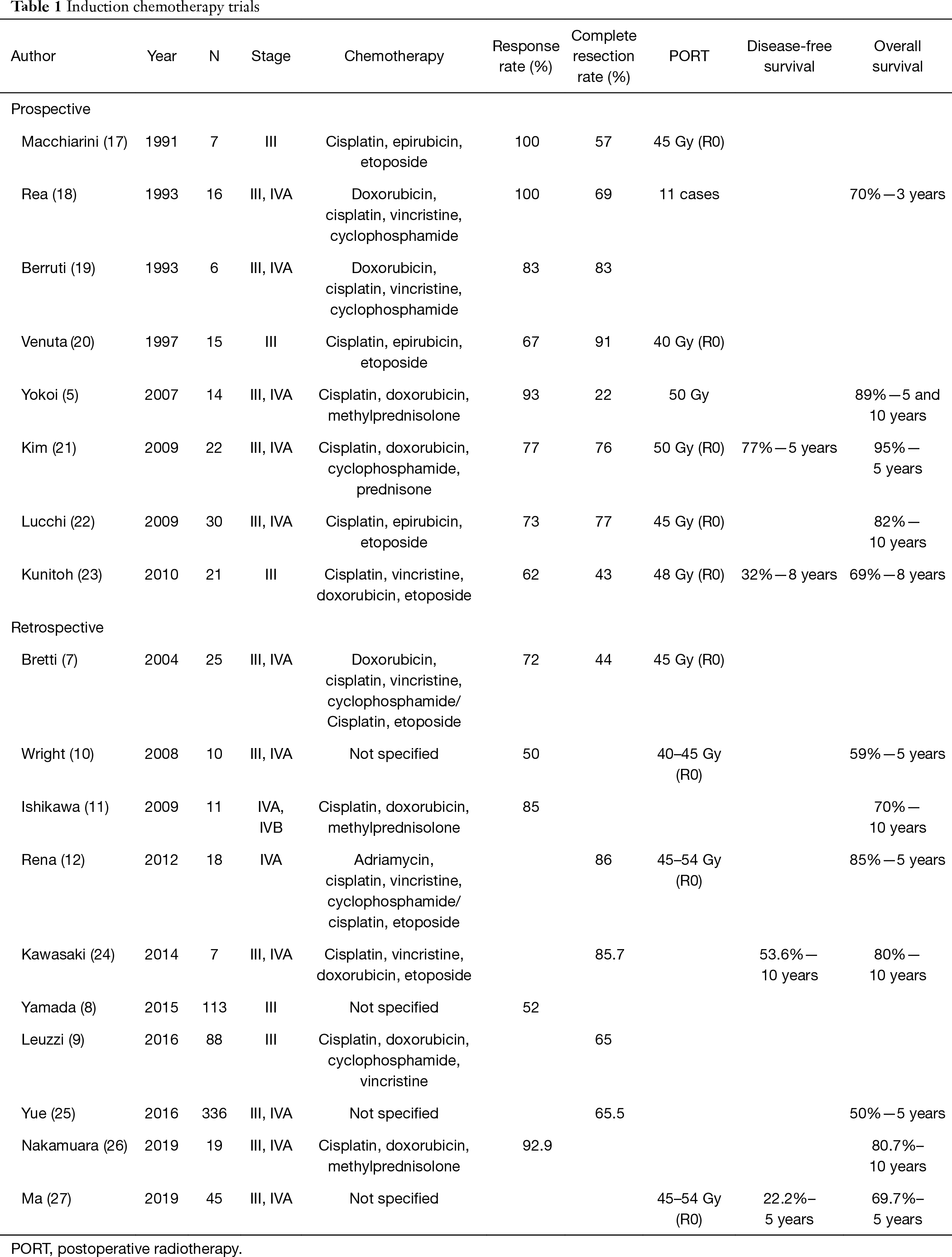 Similar to other malignancies, the addition of radiation to induction chemotherapy has been administered in unresectable stage III-IVA thymic tumors. Loehrer and colleagues reported that (28), patients with unresectable thymoma and thymic carcinoma were given radiation at a dose of 54 Gy in addition to four cycles of cyclophosphamine, doxorubicin and cisplatin. In this study, no patient had progression, one out of 23 patients (4.3%) showed complete response, 16 patients (69.6%) demonstrated partial response (10). In another study (28), 8 out of 10 patients (80%) could have complete resection after 40–45 Gy of radiation therapy and chemotherapy consisting cisplatin/etoposide. In this series, 50% of patients (4 patients out of 8) were found have pathologic complete response. These studies provided has led to a strategy in patients thought to be unresectable or marginally-resectable resectable. Similarly, in a multi-institutional phase II study (29), 22 patients with stage III thymoma or thymic carcinoma were included if the tumor diameter was greater than 8 or 5 cm with irregular borders/ectopic calcification or vascular invasion. Ten out of 21 patients who completed the induction chemoradiotherapy (47%) showed radiological response. However, nine patients developed Grade 3 or 4 toxicity. In this series more than 90% of tumor were found to be responded to induction chemoradiotherapy (29). Overall survival was 71% at years, whereas 5-year progression free survival rate was found to be 83%. In this series, perioperative mortality was 9%.

Although, chemoradiotherapy provided greater response and complete necrosis, it can lead to greater toxicity before surgery as well as a greater postoperative complications. However, there is obviously no clear consensus on the best treatment modality for a thymic tumor that is deemed to unresectable because there is no high-level evidence. Table 2 shows the results of surgical resection of stage 4 thymomas.

Radiation therapy applied as a sole therapeutical induction therapy modality has been rarely reported in the literature. Yagi and colleagues reported using Cobalt-based irradiation that, out of 30 patients with thymoma, 8 were given radiotherapy, and the survival rate of patients who received complete resection was higher than that of patients who had upfront resection (33). However, overall survival was not different between two groups. In a more recent series, authors could able to achieve complete resection in 10 of 19 patients who had preoperative radiation for invasion of vena cava and/or main pulmonary artery (37). Ahmad et al. reported that, only 6% of 1,042 patients from many institutions received induction radiotherapy alone before surgery (38).

There is no sufficient evidence to recommend radiation therapy after stage I and stage II thymoma. However, it has been shown that radiation therapy following complete resection of stage III thymoma can reduce the incidence of recurrence in the tumor-adjacent areas (1). Gao and associates investigated the role of PORT in 188 patients with resected type B3 thymoma and concluded that adjuvant radiotherapy might be beneficial in stage III and IV patients (40). Adjuvant radiation therapy can be offered in more indolent tumors such as type B3 thymoma and later stages.

As conclusion, postoperative radiotherapy can be recommended in patients with completely resected thymic carcinoma although, its role in other thymic tumors needs further investigation. Surveillance with radiation should be reserved for recurrences that are not amenable to re-resection. It should be kept in mind that, long-term follow-up is mandatory due to the indolent nature of these tumors.

Carillo and colleagues reported the results of postoperative chemoradiotherapy in 59 patients with completely resected stage II thymic tumors (49). They reported 92% of 10-year recurrence free survival. Despite the fact that, the study is an analysis of a retrospective series, the reported high survival rate is noteworthy.

Genetic profiles of thymic malignancies vary. As a targetable molecule epithelial growth factor receptor (EGFR) frequently is overexpressed in thymomas but activating mutations were reported to be rare (50). On the other hand, KIT mutations were found to be far less frequent (7% of thymic carcinomas) and are not correlated with KIT expression (51). Hu and colleagues reported as an analysis of 347 papers regarding targeted therapy against thymic malignancies that, c-KIT mutant thymic carcinomas could respond to target therapies (52). They also concluded that, the antiangiogenesis agent belinostat showed mild anti-tumour activity in heavily pretreated thymoma, but thymic carcinomas did not respond (51). It also seems that mTOR inhibitors as well as somatostatin analogues can be effective in some patients (53). Ongoing studies are assessing the opportunity of targeting emerging targets, including PI3K, CDK, and immune checkpoint PD-1/PD-L1.

Upfront surgical resection is recommended and provides high survival rate in Masaoka Stage 1 and 2 thymic tumors (Figure 5). However, a neoadjuvant therapy could be beneficial for stage 3 thymic tumors. Adjuvant therapy or additional chemo/radiotherapy should be tailored according to patient’s clinical status, stage of tumor and completeness of the resection (Figure 5). Evidence is scarce and varies for Stage IV tumors However, large randomized studies are warranted in order to clearly identify the best therapeutic options for thymic tumors. 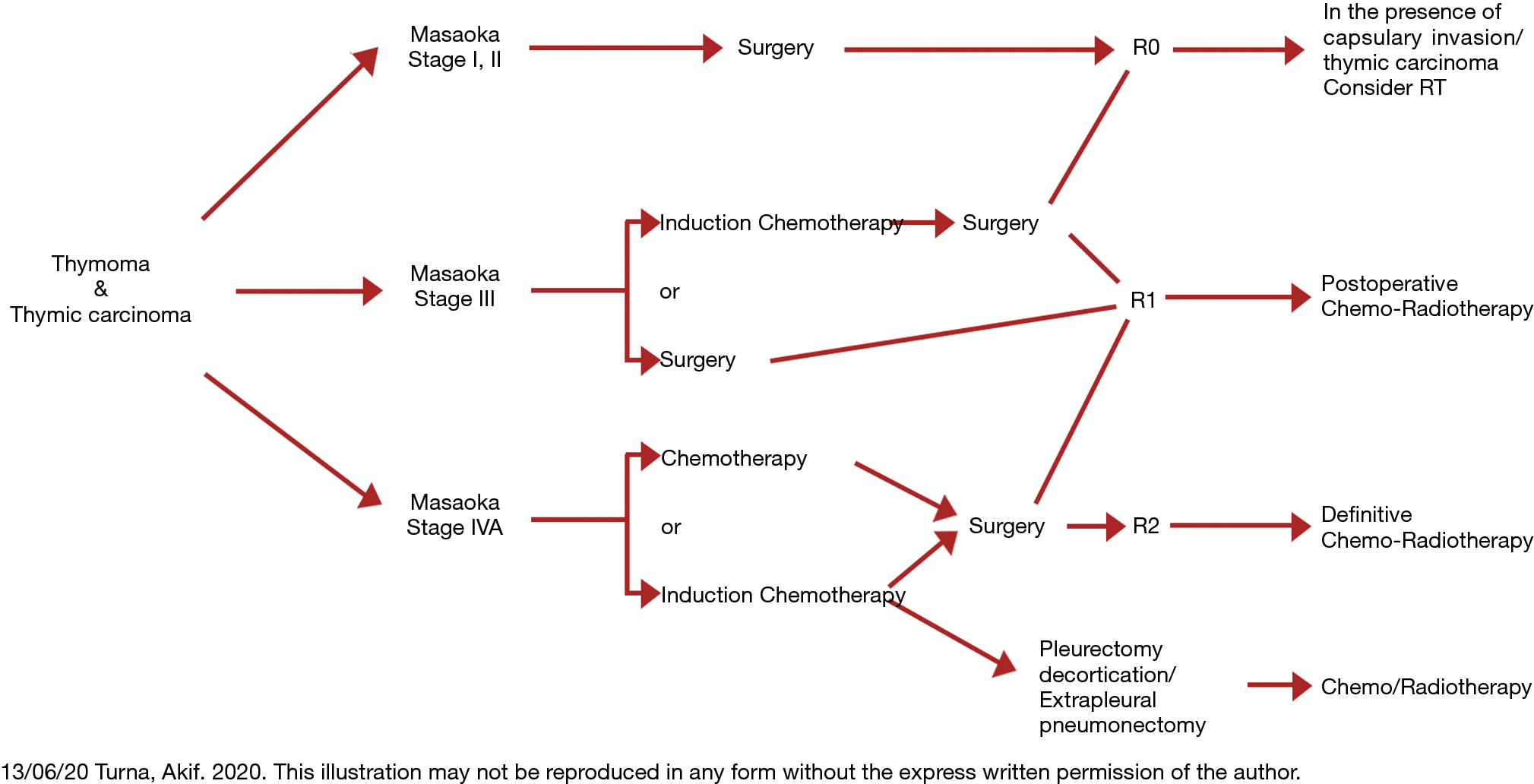 Conflicts of Interest: Both authors have completed the ICMJE uniform disclosure form (available at: http://dx.doi.org/10.21037/jtd-20-818). The series “Thymoma” was commissioned by the editorial office without any funding or sponsorship. The authors have no other conflicts of interest to declare.