Does a thoracoscopic approach provide better outcomes for pulmonary metastases?

Cancer frequently metastasizes in the lungs (1). As pulmonary metastases were traditionally viewed as systemic dissemination, surgical treatment was reserved only for palliation purposes. It is now recognized that pulmonary metastasectomy (PM) plays an important role in treating a variety of tumors (2). Indeed, for patients with limited pulmonary metastases, surgical resection can improve the clinical outcomes (3). Currently, PM can be achieved using either traditional open thoracotomy (OT) or video-assisted thoracoscopic surgery (VATS). Recent developments in endoscopic devices and surgical expertise have dramatically expanded the effectiveness of VATS in thoracic surgery. Compared with traditional OT, VATS is more effective in lung parenchyma preservation and pain control (4). Moreover, increasing evidence suggests that VATS is associated with improved outcomes in patients requiring additional surgical resections due to recurrence (5-7). However, as VATS resection is unlikely to reveal radiologically undetected parenchymal lesions due to restricted bimanual palpation at the portholes (8,9), the long-term consequences in patients with pulmonary metastases remain controversial. In this study, we reviewed and compared the operative strategies and outcomes of PM documented in previous studies, with a focus on patient evaluations, prognostic factors, and surgical strategies. We present the following article in accordance with the Narrative Review reporting checklist (available at http://dx.doi.org/10.21037/jtd-19-3958).

We defined the eligibility criteria to include studies that (I) were published in English; (II) compared patients treated using VATS and patients treated using conventional OT; and (III) evaluated oncological outcomes by comparison with the baseline values. Studies of adult patients who were diagnosed with pulmonary metastases and underwent metastasectomy were included based on the American College of Radiology ACR Appropriateness Criteria for screening for pulmonary metastatic disease. Studies based on animal models or in vitro cultures were excluded.

Two investigators (AR and WC) conducted a literature search in PubMed for studies published up to November 2019 using the following search terms: (‘lung metastases’ OR ‘pulmonary metastases’) AND (‘VATS’ OR ‘minimally invasive surgery’ OR ‘thoracoscopic’) AND (‘surgery’ OR ‘surgical management’). We limited our search to studies that involved human adults. The reference lists of the selected studies were used to cross-reference and search for additional relevant articles.

We scored the quality (study randomization, double blinding, withdrawals and dropouts) of the articles using the Jadad criteria (10). Studies scoring below 2 were considered poor, and those scoring between 3 and 5 were considered good. The authors’ details, type of study, treatment groups, sex of patients and overall survival rates (in 1, 3 and 5 years) reported in the selected articles were manually extracted and are summarized in Table 1. Finally, we individually analyzed the selected studies to determine whether VATS or OT was preferable and correlated with better outcomes. 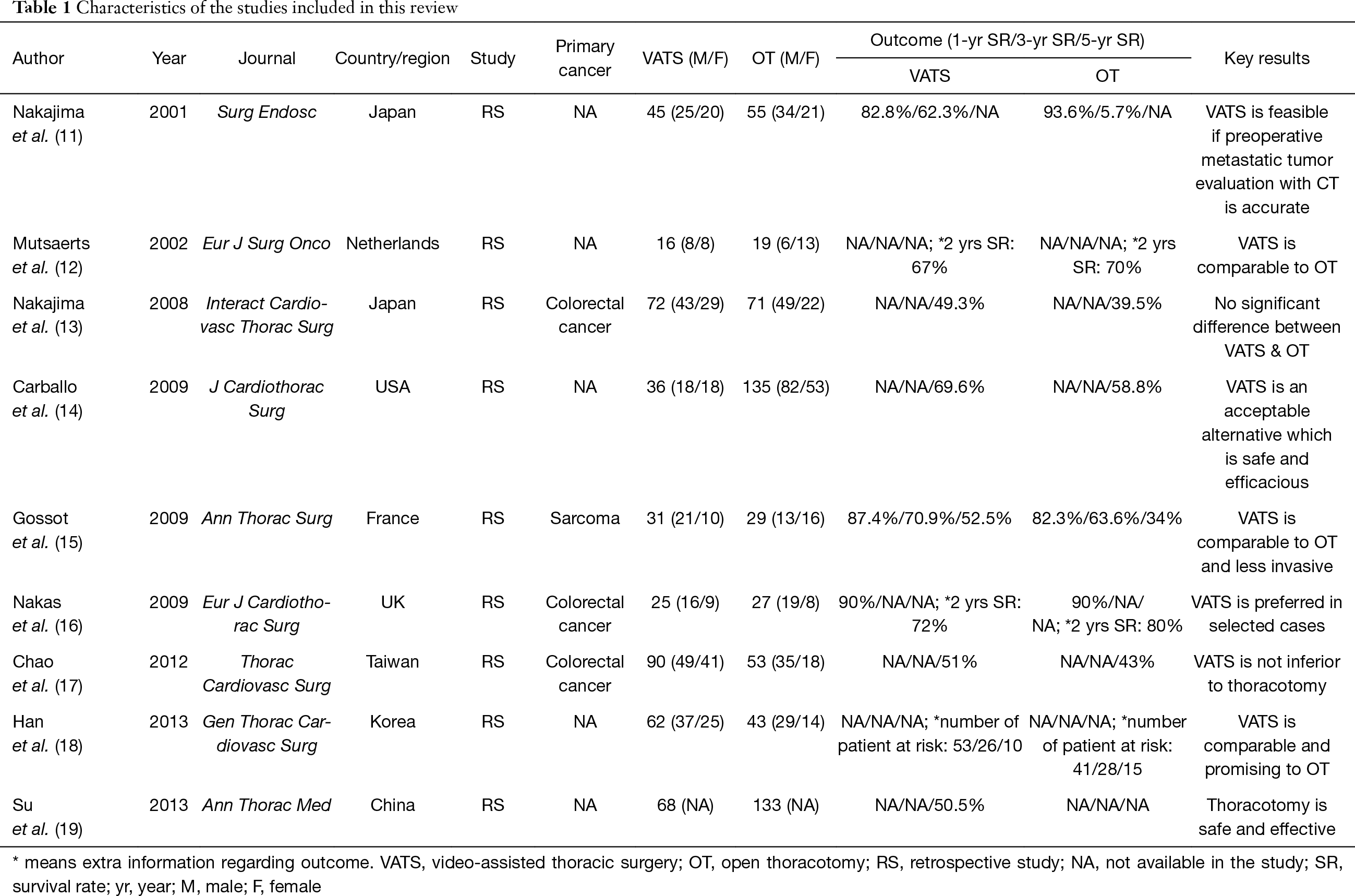 Our literature search yielded 2,788 publications, 9 of which were eventually identified to be relevant to our research question (Table 1). By screening the titles of our initial 2,788 identified studies, we excluded 2,716 irrelevant studies and 54 studies that involved animal models or in vitro culture. Of the remaining 18 relevant studies, we further excluded 6 review articles, 2 scientific letters and 1 meta-analysis conducted previously by our team (Figure 1). 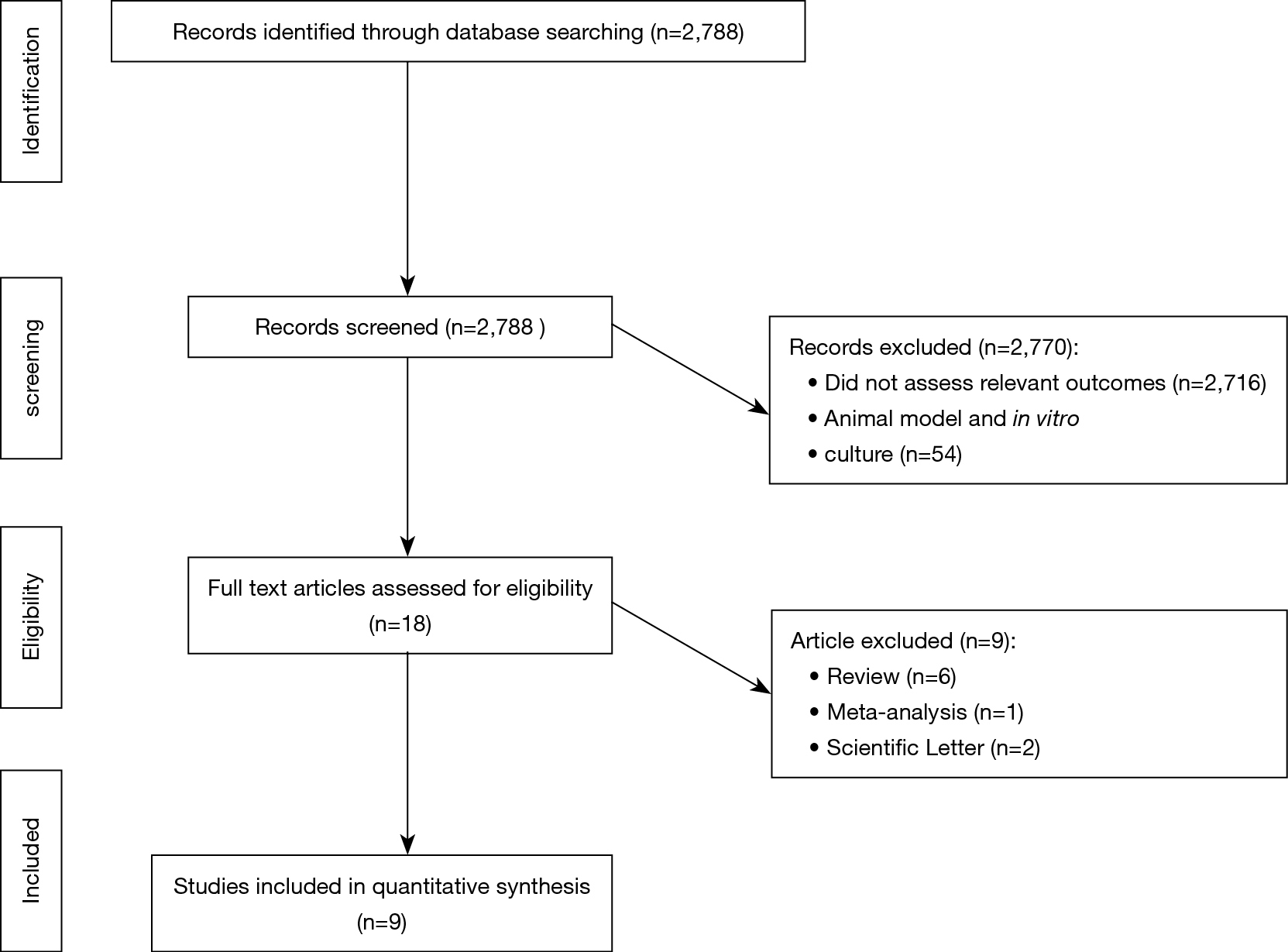 All 9 studies provided data for the 1-, 3- and 5-year survival rates. In particular, metastases from colorectal cancer were investigated in three studies, and metastases from sarcoma were investigated in one study. The number and gender ratio of patients who underwent VATS and OT are listed in Table 1. We also summarized the key results of all selected studies. Taken together, our findings provide evidence that VATS is a safe, efficacious and promising alternative approach to OT for patients who require PM.

The very first VATS PM was carried out in the 1990s. Under the 2014 National Comprehensive Cancer Network guidelines, VATS can be prescribed to primary lung cancer patients with no anatomical or surgical contraindications. Despite it not being a standard PM procedure, 40% of surgeons from the European Society of Thoracic Surgeons were reported to have performed VATS in 2008 (20). Due to its technical nature, intraoperative palpation, which is effective in revealing previously undiscovered metastases in 20–25% of patients (9,21), is not possible in VATS. Furthermore, VATS is associated with a higher recurrence rate. It is therefore important to determine whether VATS may lead to worse survival outcomes in patients with pulmonary metastases compared with conventional OT (22).

In 2016, we conducted a meta-analysis and found that VATS correlated with a better overall survival rate in PM than OT (22). Furthermore, the overall survival rates of patients who underwent VATS were found to be 87.4% at 1 year and 70.9% at 3 years by Gossot et al. (15), 62.3% at 3 years by Nakajima and colleagues (11), 69.9% at 5 years by Carballo and associates (14), and 51% at 5 years by Chao and colleagues (17). Indeed, VATS was demonstrated to be an equivalent PM procedure to OT in terms of its safety and efficacy (16), and can be used as an alternative PM approach for patients with resectable pulmonary metastases (22,23). Compared with OT, VATS elicits minimal surgical trauma and pain (24) and better preserves the respiratory function, which together dramatically improve patients’ quality of life (25). In addition, VATS is associated with reduced hospital stay, cheaper cost, faster recovery and fewer complications (12).

In contrast, a prospective study in 1996 by McCormack et al. argued that VATS should only be used as a diagnostic tool and that classic OT still correlated with more satisfactory long-term results in lung metastases management (26). Moreover, Saisho et al. [2009] concluded that metastasectomy by VATS per se is not superior to conventional OT and must be performed by skilled surgeons (27) to ensure that all nodules are identified (28). The unique ability to perform complete palpation of the lungs remains a strong argument for open surgery (19,29). Computed tomography (CT) and Positron Emission tomography (PET-CT) can determine the location and number of metastases preoperatively with moderate accuracy. However, 32.5% and 50% of nodules go undetected in PET-CT (30) and CT (31), respectively. In particular, small nodules in the lungs are often undetected by CT. While intraoperative finger palpitation can increase the detection rate of these previously unidentified nodules during conventional OT (26,32), this is impossible in VATS due to the small portholes (8,9). In line with this, patients who are treated using VATS experience a higher rate of recurrent pulmonary metastases (13) and are more likely to undergo additional surgeries.

There are some limitations of our study. First, it is likely that most of our included retrospective studies contained selection bias and other inherent limitations. Second, the lack of randomized controlled trials makes it difficult to argue for the benefits of adopting the VATS approach as the primary treatment for patients with pulmonary metastases.

In conclusion, VATS is generally a good surgical technique for treating resectable oligo metastatic lesions in the lungs. As VATS provides a minimally invasive approach, the outcomes of any further operations will also be improved. The coverage of VATS is expected to grow as surgical and imaging technologies develop. Compared with VATS, OT provides a better field of palpation for previously undetected lesions. OT also has an advantage in lung parenchyma sparing, as certain area of the lung parenchyma often needs to be resected due to angle incision in VATS. Despite that VATS is associated with many clinical benefits, more prospective studies are required to determine the indications for VATS in patients with pulmonary metastases.

Conflicts of Interest: The authors have completed the ICMJE uniform disclosure form (available at: http://dx.doi.org/10.21037/jtd-19-3958). The series “Pulmonary Metastases” was commissioned by the editorial office without any funding or sponsorship. The authors have no other conflicts of interest to declare.

Ethical Statement: The authors are accountable for all aspects of this work in ensuring that questions related to the accuracy or integrity of any part of this work are appropriately investigated and resolved.