Preoperative localization of breast lesions with a hookwire has become a standard radiologic practice (1-3). The technique is advantageous because the needle is accurately positioned under image guidance and once deployed, the hook maintains the wire in position until the patient can undergo surgical resection of the suspicious lesion (4). With the advent of video-assisted thoracoscopic surgery (VATS), thoracotomy is no longer required for the excision of peripheral lung nodules. However, VATS is limited to lesions which can be seen or palpated by the surgeon. Failure to visualize or palpate a lesion can lead to conversion thoracotomy rates of up to 46% (5). Preoperative localization of lung nodules which are too small to palpate or too far from the pleural surface to see or palpate during thoracoscopy was first described by Mack et al. (6).

This technique involves placement of a wire in or adjacent to a pulmonary nodule using CT guidance. Currently there are no localizing wires available specifically designed for lung tissue. Previous reports of localization have described the use of the nonmodified Kopans, Hawkins, and other innovative wires in localizing solitary pulmonary nodules (7-9). The majority of cases of wire localization have involved solid pulmonary nodules. We present two cases of preoperative localization of ground glass nodules (GGNs) using a modified Kopans wire. The modified Kopans differs from the nonmodified in that it bears a thick reinforced segment which is designed to be in or adjacent to the lesion. This reinforced segment allows for better palpation and visualization. To our knowledge, this is the first publication describing localization with this form of wire and specifically for GGNs.

A 46-year-old woman underwent a CT chest for evaluation of chronic cough. The CT demonstrated a 1cm GGN in the central portion of the left lower lobe (Figure 1). This nodule was later biopsied and the final pathology documented atypical cells suspicious for adenocarcioma in situ (formerly known as bronchioalveolar carcinoma). Surgical resection through VATS was planned but because of the ground glass nature of the nodule and its distance from the pleural surface, preoperative wire localization was requested. 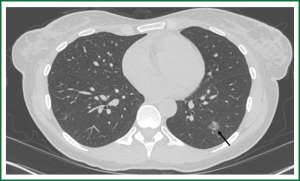 The wire localization was performed using a helical CT scanner (HiSpeed Advantage; General Electric Medical Systems, Milwaukee, WI). The optimal skin entry was determined following consultation with the referring surgeon. Conscious sedation was performed using a combination of Fentanyl and Versed. Following informed consent, the patient was positioned prone on the CT scanner table. An initial scan with 2.5 mm sections through the area of the suspected nodule was performed so that the entry skin site, depth, and angulation of the needle could be planned. The skin entry site was marked and prepped with chlorhexidine and draped in the usual sterile fashion. The length of the hookwire (Modified Kopans; Cook, Bloomington, IN) was determined by the depth required to reach the lesion from the skin surface plus an additional 1.5 cm in order to position the stiff portion of wire adjacent to or within the nodule. Following local anesthesia of the soft tissues with 1% lidocaine, using serial CT scans to confirm locations, a 20-gauge spinal needle was positioned adjacent to the nodule. Once the tip was placed at the desired location, the stylet was removed and the hookwire was deployed by pulling back the spinal needle; additional CT image confirmed final placement (Figure 2). The portion of wire external to the patient was secured to the patient’s skin in a sterile fashion with gauze and tape. The patient was then transferred to the operating room for wedge resection. A small pneumothorax was present at the completion of the procedure. The patient underwent successful wedge resection of the nodule and the localizing hookwire. Final pathology of the nodule confirmed adenocarcioma in situ. 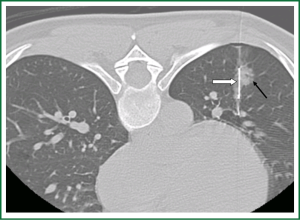 A 71-year-old male who underwent a CT abdomen and pelvis in June 2010 for work up of additional treatments for his Crohn's disease, was found to have a 1.5 cm GGN in the right lower lobe (Figure 3). He had a 6-month follow up PET/CT which demonstrated slight interval increase in size of the nodule without discernable hypermatebolism beyond background. The patient reported no respiratory symptoms. This nodule was suspicious for adenocarcinoma in situ based on its imaging characteristics and surgical resection was planned. Due to the ground glass nature of the nodule, preoperative wire localization was requested. 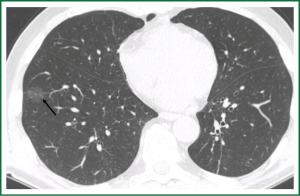 The procedure was performed with a similar technique to case 1. Following local anesthesia of the soft tissues with 1% lidocaine, using serial CT images for guidance, a 20-gauge spinal needle was advanced into the nodule. Once the tip was placed at the desired location, the stylet was removed and the hookwire was deployed by pulling back the Chiba needle; additional CT images confirmed placement (Figure 4). The portion of the wire external to the patient was secure to the patient’s skin in a sterile fashion with gauze and tape. The patient was then transferred to the operating room for wedge resection. A small pneumothorax was present at the completion of the procedure. The patient underwent successful wedge resection of the nodule and the localizing hookwire. Final pathology of the nodule was adenocarcinoma in situ. 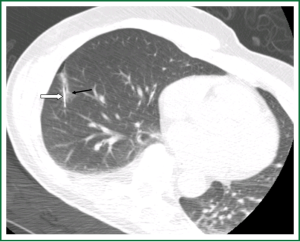 VATS is a minimally invasive surgical solution for resection of solitary pulmonary nodules. However, VATS-assisted wedge resection can be challenging in cases where the nodule is too small or too far from the pleural surface, or lacks sufficient density such as GGNs to be palpable by the surgeon.

Several preoperative and intraoperative nodule localization techniques have been reported in the literature. CT-guided methylene blue or colored collagen injection has been described though is limited by the rapid spread of the dye through the lung parenchyma (10,11).

Intraoperative tattooing of lung lesions has also been described, though this technique requires palpation of the lesion, much like resection without pre-operative localization (12). Intraoperative endoscopic ultrasound has also been used to identify peripheral nodules, but with a high false negative rate up to 40% (13).

Hookwire needle localization of pulmonary nodules was first described by Mack et al. (6), using the principles and techniques used for years to locate breast lesions prior to surgery. Several reports have described modifications to this technique. Plunkett et al. (14) described the use of the Hawkins III breast lesion localization system (Angiotech Pharmaceuticals Inc; Vancouver, BC, Canada), though wire dislodgement occurred in 2 of 20 patients. Surgical time was prolonged in these two cases, but without having to convert to open thoracotomy.

There is no commercially available hookwire specifically designed for localizing lung nodules. Additionally, there is no consensus with regards to which wire to use for cases of GGNs. We favor the use of the modified Kopans wires; the reinforced segment of the wire allows for an additional tool in visualizing or palpating the nodule. We prefer to deploy the wire through either a spinal needle which bears a stylet. The stylet protects against introduction of air into the pleural space. Once in proper position, the stylet can be quickly removed and the hookwire can be deployed.

Previous reports describe wire localization of solid pulmonary nodules, with only a few reported cases of GGNs. We believe GGN smay be localized with the same ease, and indeed may become a more common indication for localization given GGNs often lack the density to be easily palpated.

Both our patients experienced a small pneumothorax following wire deployment. This did not affect the patient’s status, and were ultimately inconsequential as the patients went immediately to the operating room to undergo VATS. According to the literature asymptomatic pneumothorax may occur in 30% of the patients (16). Additional complications include parenchymal hemorrhages which rarely affect the outcome of the procedure, and potential wire dislodgement following placement. The latter is of particular concern because if the procedure is not salvaged through wide excision, conversion to open thoracotomy may be required.

In both of our cases, the wires successfully localized the lesion for the surgeon and were removed in the operating room. This may be due to the use of the modified Kopans wire, which has a sturdier portion proximal to the hook. In addition, the distance between the hookwire tip and the pleura was always greater than 3 cm, a factor demonstrated to correlate with successful wire localization (16).

In summary, we have described preoperative wire localization of GGNs with a modified Kopans wire resulting in successful surgical resection. The modified Kopans wire, secondary to its reinforced segment is an excellent and effective tool in facilitating thoracoscopic surgery for wedge resection of pulmonary nodules that are too small, too far from the pleural surface, or not dense enough to see or palpate. However, further research is required to determine the optimal pulmonary nodule pre-resection localization technique.