Miliary tuberculosis (TB) results from hematogenous dissemination of mycobacterium tuberculosis (1). The term miliary was first described in 1700 by John Jacobus Manget, who linked the appearance of the involved lung, with its surface covered with firm small white nodules, to millet seeds.

This term now denotes all forms of progressive, widely disseminated hematogenous tuberculosis, even if the classical pathological or radiological findings are absent.

Miliary TB is a rare cause of acute respiratory distress syndrome (ARDS) (2,3). Described below is a case of a patient who had a fatal combination of miliary TB and ARDS.

Follows, a detailed review of the literature relevant for both miliary tuberculosis, and its combination with ARDS.

An afro-american male, with no previous records, and no available identity papers or relatives, was brought to our institution as he was found unresponsive lying on the street. Consequently he was intubated for airway protection. He was atraumatic, and normocephalic. Auscultation of the lungs was significant for bilateral crackles. His vitals revealed a fever of 102 F, tachycardia, and tachypnea with an oxygen saturation of 92%. His head computed tomography was negative for any acute abnormalities, and an electroencephalogram was negative for any epileptiform activities.

Admission blood work was significant for hyperkalemia, acidosis with high anion gap, renal and liver failure. A white count of 3,700/micro-liter with 77% neutrophils, a lactate level of 16 milli-moles per liter, and an LDH of 1,291 IU/L. He also had a reactive anti-HCV (hepatitis C virus) antibody, an HCV RNA of 56,611,264 copies/mL and a negative HIV (human immunodeficiency virus) test.

A lumbar puncture was planned once the coagulopathy is corrected, however meropenem and ampicillin were started empirically. Lactulose was given as well for possible hepatic encephalopathy.

On the second day he was found to have portal vein thrombosis on abdominal sonogram, with splenomegaly and mild ascites. This portal vein thrombosis could well be chronic secondary to viral and alcohol hepatitis, and anticoagulation was recommended. His pancytopenia was most likely secondary to splenomegaly and splenic sequestration, but also to sepsis especially that toxic granulations and Dohle bodies were seen in the neutrophils.

Finally, his change in mental status was most likely related to a metabolic and hepatic encephalopathy. 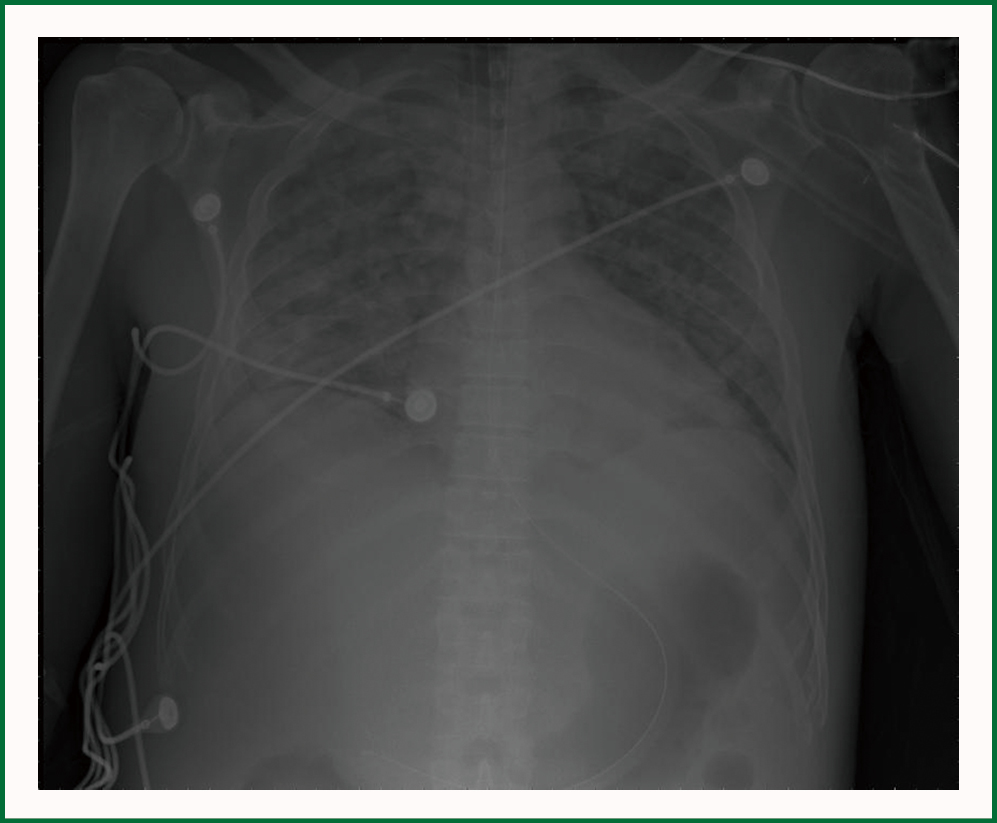 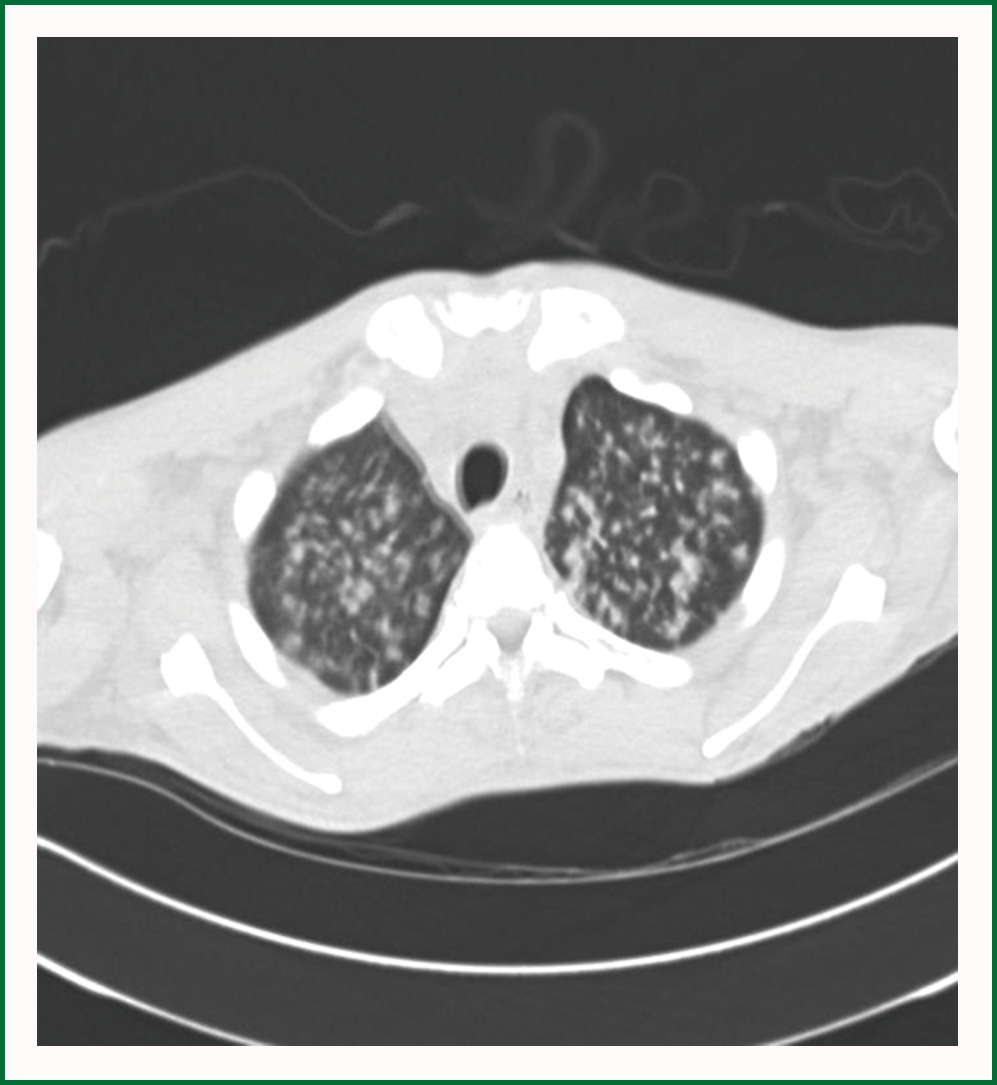 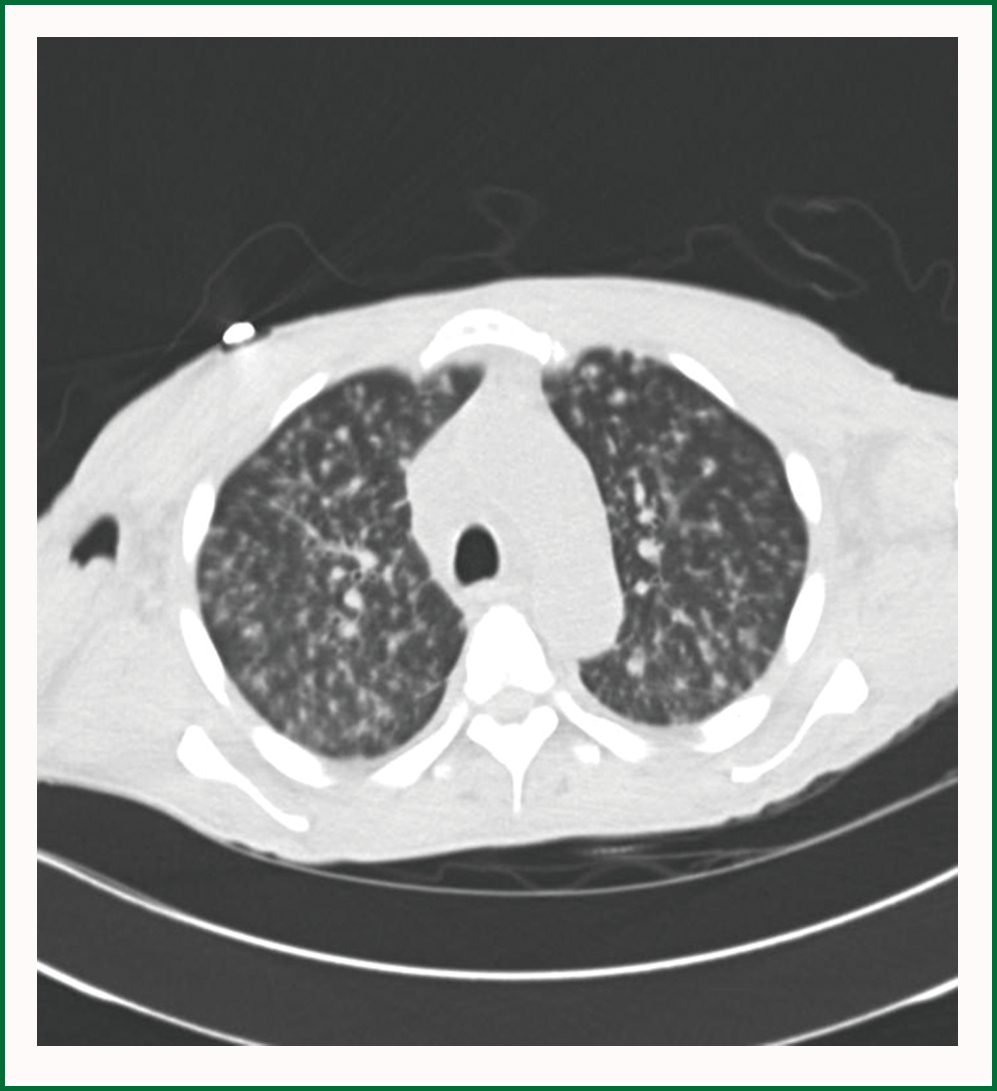 Based on the above radiological and microbiological features, patient was placed on moxifloxacin, ethambutol, amikacin, and rifabutin as per the department of health recommendations, in view of his liver function abnormalities. As his chest X-ray was compatible with acute respiratory distress syndrome in conjunction with the miliary tuberculosis pattern, steroids were started.

On the fourth day, he was hypotensive and required vasopressors. His liver and renal function further worsened, as well as his hypoxia and metabolic acidosis. Patient expired on day 5 of hospitalization despite aggressive resuscitation. His final death was related to an acute hepatitis with portal vein thrombosis, miliary tuberculosis with ARDS, further complicated by a septic shock.

Miliary tuberculosis can be primary progressive with an acute onset and rapid clinical course, or could be a reactivation of a latent focus, which is more likely to be subacute and chronic.

The acute disease may be fulminant, including multiorgan system failure (4-6), septic shock (7), and ARDS (2,3).

Data from the Centers for Disease Control and Prevention (CDC) during the era of current TB therapy but prior to the HIV epidemic reported that 1.3 percent of all cases of TB were classified as miliary (8).The percentage of HIV-infected patients with miliary TB in one New York City hospital was 38 compared to 8 percent of non-HIV-infected patients with TB at the same institution (9,10). Patients with the lowest CD4 counts appear to have the highest risk for developing disseminated disease (11).

However, a significant percentage of patients have no demonstrable high risk condition for dissemination; so miliary tuberculosis should never be excluded as a clinical diagnosis because an underlying medical illness is absent.

In the pre-HIV era, the CDC reported that approximately 3 percent of African-Americans developed disseminated disease compared to less than half that rate in Caucasians (12). Our patient was Afro-American.

The classic appearance of miliary tuberculosis is a faint, reticulonodular infiltrate distributed fairly uniformly throughout the lung, and this miliary pattern may only become apparent days or weeks after presentation (13-18). High resolution computed tomography (HRCT) of the chest is more sensitive for miliary TB than plain chest radiography and has improved the diagnosis (19). Numerous, 2 to 3 mm nodules can be visualized, distributed throughout the lung. Septal thickening usually accompanies these nodules.

A miliary pattern on chest radiograph is not required for diagnosis confirmation, as approximately fifty percent of patients with a confirmed diagnosis of disseminated TB have a normal chest radiographs (13-17).

Pancytopenia should raise the miliary spectrum; this may be due to marrow infiltration alone or be a manifestation of an underlying hematologic disorder (13). Mortality has been reported to be as high as 100% if there is associated pancytopenia (20). This was probably an indicator of the mortality risk in our patient.

Histopathologic examination of tissues continues to play an important role in the rapid diagnosis of miliary TB, and liver biopsies have the highest yield compared to bone marrow biopsies and to transbronchial biopsies (13-17).

In an extensive review of the literature, less than thirty cases of a combined miliary pattern with ARDS were described (21).

Underlying liver cirrhosis was the main predictor of miliary tuberculosis in a series of 34 patients described by Kim et al. Our patient had this risk factor. Also platelet count, serum albumin and liver enzyme level at the time of admission were significant factors both for ARDS development and for survival (23). These parameters correlates well with the clinical picture that our patient had and his complicated hospital course by ARDS and death.

Central nervous system (CNS) disease such as meningitis or tuberculoma can be suggested clinically (14). A TB meningitis couldn’t be ruled out in our patient as the lumbar puncture was not attempted view the coagulopathy.

Also, Seeding of every organ in the body can occur, and was reported in autopsy series of miliary TB (16).

Early treatment is emphasized in most reported cases and studies as a factor improving prognosis. Usual treatment is antituberculosis chemotherapy, corticosteroid, and sivelestat sodium hydrate.

The therapeutic recommendations of the Centers for Disease Control and Prevention (CDC) and the American Thoracic Society (ATS) for disseminated TB are the same as for pulmonary TB (25).

Longer therapy should be considered in children and immunocompromised hosts, those with lymphadenitis, those with a large organism burden, and those with a slow microbiologic or clinical response.

CNS disease, pancytopenia and lymphopenia are independent predictors of mortality (13-17). All the above complications were noticed or suspected in our patient, which made his prognosis very guarded.

As a rare case of combined fatal ARDS with miliary tuberculosis, an emphasis on early diagnosis and management, as well as considering all predictors of outcome, remains essential in every plan of care. Doubts remain on the feasibility of randomized clinical trials or even single center case series, view the rarity of the described above combination.