Coronary artery bypass grafting (CABG) remains the most frequently performed procedure in the field of adult cardiac surgery. Even though the first attempts to perform this surgery were done on a beating heart without the cardiopulmonary bypass (CPB), nowadays the conventional CABG-procedure is mostly performed on-pump (1). Although there are several publications showing no long-term difference in the outcome after the on-pump (ONCAB) and off-pump (OPCAB) CABG procedures (2), there is still an ongoing debate on this matter. The reason for this is the controversy in the outcomes of the major coronary trials. For example, the lack of experience of the off-pump surgeons in the ROOBY trial or the low volume of the performing centers might have influenced the study outcomes. There is a wide range of complications, caused by the extracorporeal circulation and cardiac arrest (3). The negative influence of the cardioplegia on the myocardium tissue, ischemia-reperfusion damage (4), impairment of the liver (5), kidney and lung function (6), abdominal ischemia (7), stroke (8), immunosuppression and coagulopathy (9), leading to bleeding complications, systemic inflammatory response, and postoperative cardiac arrhythmia (10) are all the problems associated with the utilization of CPB. Moreover, the increasing age of the patients and the increasing patient population with impaired left ventricular function are adding to the complexity of the decision-making on the revascularization strategy. These patients tend to present more frequently with a diffuse multi-vessel coronary disease, which also complicates the revascularization and leads to early complications if operated on-pump (11). Off-pump procedure allows to avoid some complications of CPB like hemodilution, embolism from manipulation on the aorta, non-pulsatile flow, and systemic inflammatory response induced by the ischemia reperfusion injury (12). The most beneficial is the off-pump procedure in high-risk patients with chronic obstructive lung disease, kidney injury, atherosclerosis, and multi-vessel coronary disease (13,14).

In this study, we present a single center experience of the off-pump vs. on-pump multi-vessel revascularization in patients with multi-vessel coronary artery disease (CAD). We present the following article in accordance with the STROBE reporting checklist (available at http://dx.doi.org/10.21037/jtd-20-1284).

This study is a retrospective, observational cohort review with prospectively collected data. All patients (n=120) with multi-vessel CAD, who underwent a surgical revascularization (Group 1: on-pump n=60 and Group 2: off-pump n=60) by experienced surgeons from May 2018 to August 2019 were included in the study. Data collected prospectively as part of the institutional database included detailed information on patients’ demographics and baseline clinical characteristics and their laboratory, echocardiographic, and hemodynamic parameters, as well as intraoperative variables and postoperative outcomes. The primary endpoints were overall survival after the operation at 30 days and freedom from severe adverse events (SAE), which included myocardial infarction (MI), coronary artery reoperation, and re-thoracotomy caused by bleeding and stroke.

To describe the angiographic atherosclerosis, we used the Gensini score, which enables one not only to quantify the degree of arterial narrowing, but also to specify its localization (15). This empirical index is based on the position, the percentage of the stenosis, and the artery where it appears.

All surgeries were performed under general endotracheal anesthesia. Coronary arteries in the OPCAB procedures were exposed with the aid of deep pericardial stitches and heart stabilizers.

Intracoronary shunts were used for myocardial protection in all off-pump cases. Proximal anastomoses were performed with a partial clamp technique.

The on-pump cases were performed under standard CPB procedure with ascending aortic cannulation, cannulation of the right atrium with a single two-staged cannula, and aortic vent. Anterograde warm blood cardioplegia (Calafiore) via aortic root was used to arrest the heart. Proximal anastomoses were performed with a partial clamp technique. In every coronary procedure, we apply epiaortic ultrasound to evaluate or map where to put the aortic clamp, the partial clamp for the proximal anastomosis, or, eventually, to decide to perform the procedure in the single clamp technique if the partial clamp is impossible to place. The grafts used were left internal mammary artery as well as saphenous vein grafts (SVGs) (Figure 1). The total mean number of bypasses was 4 [interquartile range (IQR), 4–5] per patient (maximum 7). Left internal mammary was anastomosed either as a single graft or sequentially to LAD and diagonal branch. SVG was anastomosed sequentially or as a single graft when anastomosed to the proximal right coronary artery (RCA). In all the cases, complete revascularization was achieved. The indication for each procedure was made in accordance with the current guidelines (16).

Respiratory complications were re-intubation, postoperative tracheotomy and a prolonged ventilation time for more than a week postoperatively. Postoperative MI was defined as any or all of a troponin elevation beyond the normal upper limit, as defined by the testing laboratory, without electrocardiographic (ECG) changes, or clinical symptoms (severe chest pain or radiotherapy to the left arm or jaw), or ECG changes consistent with MI. Stroke was defined as a persistent (lasting longer than 1 week) neurologic deficit, consistent with a central nervous system lesion that occurred within 30 days of operation.

The data were analyzed using IBM SPSS Version 25 (IBM Corporation, Chicago, Ill., USA). We used the Kolmogorov-Smirnov test to prove the data for normal distribution. Quantitative data are expressed as the mean and standard deviation (SD) for normally distributed variables and as the median and IQR for not normally distributed variables. Categorical data are expressed as frequency and percentage. The significance of survival differences between the groups was assessed with Log-Rank and Breslow tests. A value of P<0.05 was considered to be statistically significant. 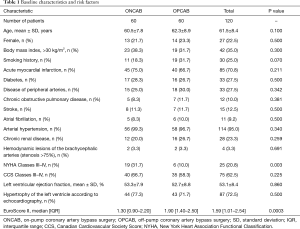 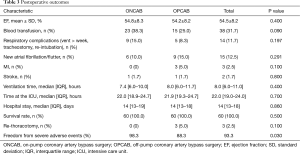 CABG remains the most frequent performed procedure in the field of adult cardiac surgery. In this study, we compared 120 patients with multi-vessel CAD receiving a surgical coronary revascularization on-pump and OPCAB. As described, there is a large number of complications associated with the CPB. Comparing the two groups of patients, we were expecting the lower rates of CPB-associated adverse events in the OPCAB group. In our study, we could not show that patients in the OPCAB group required fewer blood transfusions than the patients in the on-pump group (38.3% vs. 25.0%, P=0.090). We also did not see any significant difference in the respiratory complications between the groups (8.3% vs. 15.0%, P=0.197). Even though the patients in the on-pump group presented with a higher NYHA Class (NYHA III–IV 31.7% in the on-pump group vs. 10.0% in the OPCAB group), the patients in the OPCAB group had higher EuroScore II rates, which means they carry a higher postoperative risk. We should also mention that the higher Euro-Score rates in the OPCAB presented in our study were still <2%, which is considered to be in the low-risk range (17). Despite the higher EuroScore Class in the OPCAB cohort, there was no difference in the postoperative survival between the groups: the overall 30-day survival was 100%, which shows that the OPCAB procedure is safe and non-inferior in mortality for these groups of patients. There is a controversial opinion that the OPCAB procedure might be associated with an incomplete revascularization and a tendency on the part of surgeons to perform fewer anastomoses than in on-pump procedure (18). Our study presents both groups with the same number of anastomoses (4–5, max. 7) in patients with multi-vessel CAD with comparable complexity of CAD defined by Gensini score.

There is an ongoing conversation about the non-inferiority of the OPCAB procedure to the on-pump revascularization. The interest in the OPCAB surgery arose again in the 90th to reduce the complications caused by CPB. A large number of studies on this matter have been published, but there is still no definitive answer to the question whether the OPCAB surgery is non-inferior to the conventional type of the coronary revascularization. In the ROOBY trial with 2,203 randomized patients, Shroyer et al. describes better survival and better graft patency in the on-pump group at 5 years (19). A question about the surgeons’ experience participating in the trial was raised immediately. A median number of off-pump cases performed by the surgeons participating in the ROOBY trial was 50, which means that a significant number of surgeons were still in the learning curve for the OPCAB procedure. In our study, all the procedures were performed by experienced surgeons performing over 125 CABG procedures (OPCAB and on-pump) per year. Another large trial—the CORONARY trial—comparing both procedures on 4,752 randomized patients showed no significant difference between off-pump and on-pump CABG with respect to the 30-day rate of death, MI, stroke, or renal failure requiring dialysis. The same conclusion followed after the 5-year follow-up of the CORONARY trial was completed (2). Carmona et al. performed a propensity score matching analysis for over 2,000 patients and reported no significant difference in mortality, but found lower incidence of postoperative pulmonary, neurological, and renal complications in the OPCAB group, which showed that OPCAB procedure is safe for the patients and is non-inferior in terms of mortality and morbidity compared to the on-pump CABG. This propensity score matching analysis also described the lower number of the distal anastomoses and anastomoses to the left lateral wall in the OPCAB group, which we did not see in our study. All the surgeons in this trial completed a sufficient OPCAB training (20). Diegeler et al. came to the same conclusion in the largest German GOPCABE trial with 2,539 patients in high-volume OPCAB institutions. The trial revealed no significant difference in the composite end point consisting of death, stroke, MI, new renal replacement therapy, or repeat revascularization at 30 days and 1 year. Although there was no significant difference in the survival, the study confirmed shorter periods of ICU and hospital stay, as well as reduced need for blood transfusion for the OPCAB patients, which was also confirmed in our results. All the procedures were performed by highly qualified coronary surgeons (21). Similar results were reported by Kirmani et al. in the largest single center propensity score matching study, with more than 5,000 patients per group (22). The study also emphasized the safety of teaching and performing coronary revascularization OPCAB, because of the low conversion rate to the on-pump procedure and clinically comparable number of performed anastomoses in both groups, as also described in our study.

In this review, we report on significantly longer operative times in the OPCAB group (183 vs. 169 min, P<0.001) with the similar number of anastomoses in both groups (4–5, maximum 7). Though the operative time is known to be an independent negative predicting factor of mortality during a cardiac procedure, because of the completeness of the multi-vessel revascularization and a number of peripheral anastomoses in the OPCAB group, the operative time had no influence on the mortality. Though we did not see any difference in the mortality at 30 days, the SAE rate was—at 11.7%—significantly higher in the off-pump group than in the on-pump patients (1.7%, P=0.030).

We have to report on several study limitations. First, alongside with the observational type of study, we were limited by the number of patients. Second, the assignment to one of the study groups was done via surgeons’ decision on the type of CABG. Finally, the graft patency was not angiographically assessed. Instead, the rate of repeated revascularization was used as a clinical correlation parameter.

Reporting Checklist: The authors have completed the STROBE reporting checklist. Available at http://dx.doi.org/10.21037/jtd-20-1284

Conflicts of Interest: All authors have completed the ICMJE uniform disclosure form (available at http://dx.doi.org/10.21037/jtd-20-1284). The authors have no conflicts of interest to declare.

Ethical Statement: The authors are accountable for all aspects of the work in ensuring that questions related to the accuracy or integrity of any part of the work are appropriately investigated and resolved. The study was conducted in accordance with the Declaration of Helsinki (as revised in 2013). The ethical board of the institution approved the study protocol (NO.: 2322) and data gathering and waived the need for informed consent form patients for data use. All patients signed the informed consent on follow-up.