Idiopathic pulmonary fibrosis (IPF) is a common, progressive fibrotic lung disease characterized by honeycombing on high-resolution computed tomography (HRCT) images (1-3). The median survival time of IPF patients is approximately 3 years (4) and the most common cause of death is progressive respiratory failure (5,6). Some IPF patients have a stable clinical course, whereas others have variable long-term courses and survival (7,8). Thus, predicting survival with IPF is quite important for patients.

For clinicians, many useful staging algorithms have provided useful information, such as for systemic sclerosis-associated interstitial lung disease (ILD) (9), lung cancer (10), and chronic obstructive lung disease (COPD) (11). A prediction model for IPF was proposed (12), although this is quite complicated for use in clinical practice. Recently, some staging systems that used simple variables were proposed for IPF, which included respiratory hospitalization or gender, age, and physiology (GAP) (13,14).

Kazerooni et al. proposed a CT scoring system for IPF (15). In addition, the latest IPF guidelines emphasize the utility of HRCT findings (16). From the clinical perspective, a simple staging system that is applicable to real world situations is desirable. However, the clinical and radiological characteristics of IPF according to GAP staging remain unknown.

Thus, in this study, we used the GAP staging system to determine the clinical characteristics, HRCT findings, and the most important predictors of mortality for IPF patients.

And the definition of PAH was over 35 mmHg of estimated systolic pulmonary arterial pressure, which was calculated by transtricuspid pressure gradient pressure plus right atrial pressure. Chest CT images were obtained with 1.5-mm-thick axial sections at 1-cm intervals throughout the thorax during the inspiratory phase. No oral or intravenous contrast material was administered. We selected three levels for image scoring. These were at the aortic arch, the carina, and 1 cm above the right diaphragm. We also evaluated ground glass opacity (GGO) and honeycombing. GGO was defined as increased opacity in the parenchyma without obscuring of any lung vessel.

Honeycombing was defined as a cluster of relatively thick-walled (1-3 mm) cysts that were 3-10 mm in diameter with multiple cysts that shared walls and a single layer of clustered subpleural cysts located in the periphery of the lung, thus ensuring that paraseptal emphysema was not present (18). Each lung lobe was scored on a scale of 0-5 (0, <5%, 5% to <25%, 25% to <50%, 50% to <75%, and >75% lobe involvement) for both GGO and honeycombing on the basis of the scoring system of Kazerooni et al. (15). The GGO and honeycombing scores for each lobe were averaged for an individual patient.

We then evaluated the results for each clinical, physiological, and radiological variable according to GAP staging.

Acute exacerbation was diagnosed based on Collard criteria (20).

During the study period, we identified 54 IPF patients for whom there were sufficient data. The clinical characteristics of these IPF patients are shown in Table 1. They included 36 men and 18 women, with a mean age of 71 years (range, 53-85 years). Among these patients, 37 were ex or current smokers and had a mean 34 pack-year history (range, 3-120 pack-year). Mean mMRC dyspnea scale scores and dyspnea duration were 1.8 (range, 1-3) and 8.4 months (range, 0.3-60 months), respectively. A total of 24 patients (44.4%) had clubbing. Regarding female patients, we checked connective tissue (CTD) associated symptoms and autoantibodies and ruled out CTD. 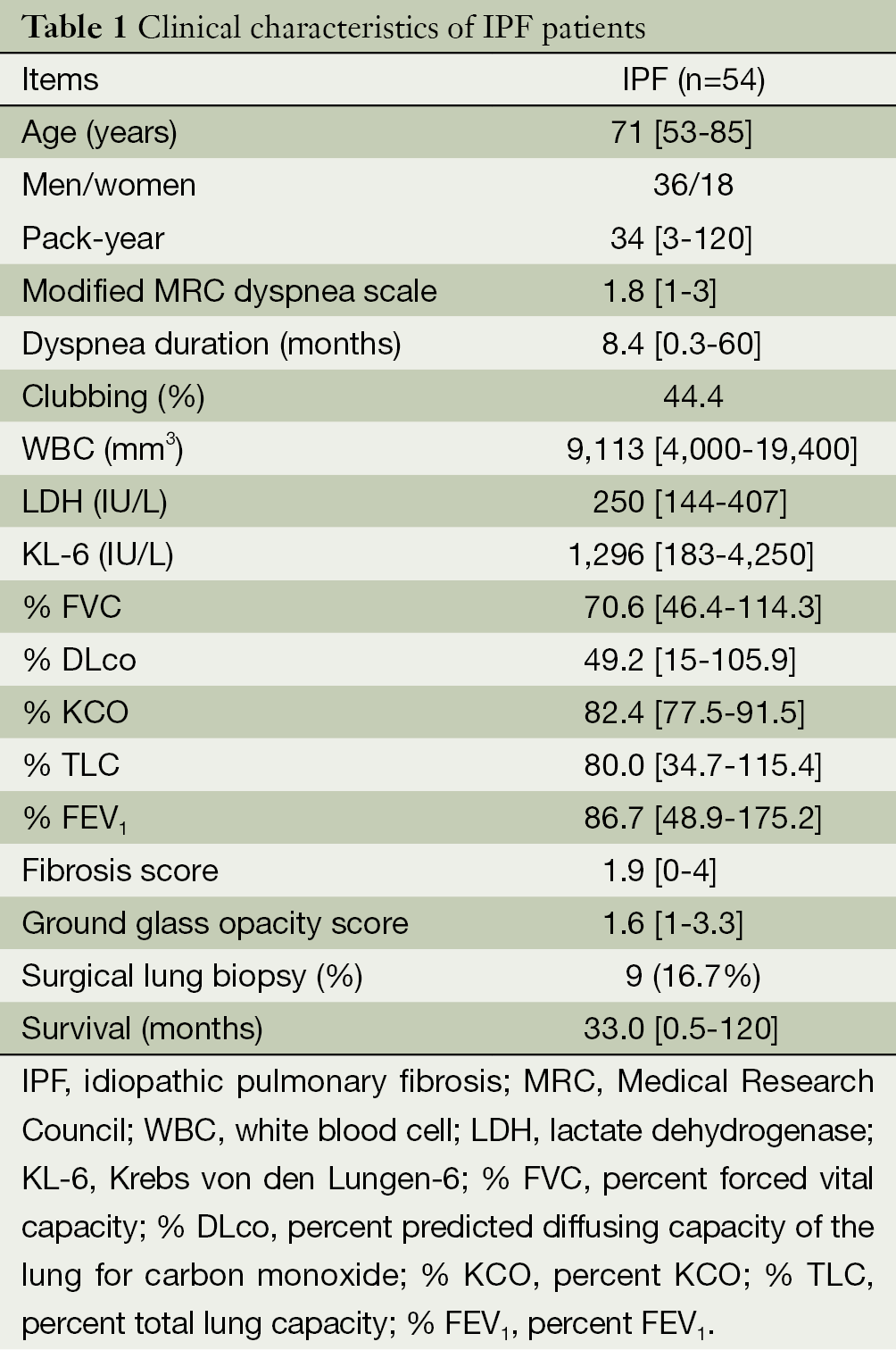 Table 2 shows the clinical characteristics of the 54 IPF patients according to GAP stages I-III. Mean fibrosis and CPI scores according to GAP stages were 1.8 and 40.9 for stage I, 2.0 and 54.1 for stage II, and 1.8 and 69.7 for stage III, respectively. Stage III patients had pulmonary arterial hypertension (PAH) more frequently compared with stage II patients (50% vs. 23%, P<0.036). Mean systolic pulmonary artery pressures of stage III and stage II patients were 52 mmHg (range, 40-66 mmHg) and 40 mmHg (range, 35-48 mmHg), respectively.

We re-evaluated mMRC dyspnea scale scores at 1 year (Table 3). Within 1 year, 18 patients died. Therefore, we analyzed serial change according to the survival duration. Delta mMRC scores tended to increase with stage III as compared with those with stage I and stage II, although these differences were not significant (P=0.07). Stage III patients tended to have a higher incidence of acute exacerbations than stage II and stage I patients (58.3% vs. 40.9% and 20.0%, respectively). 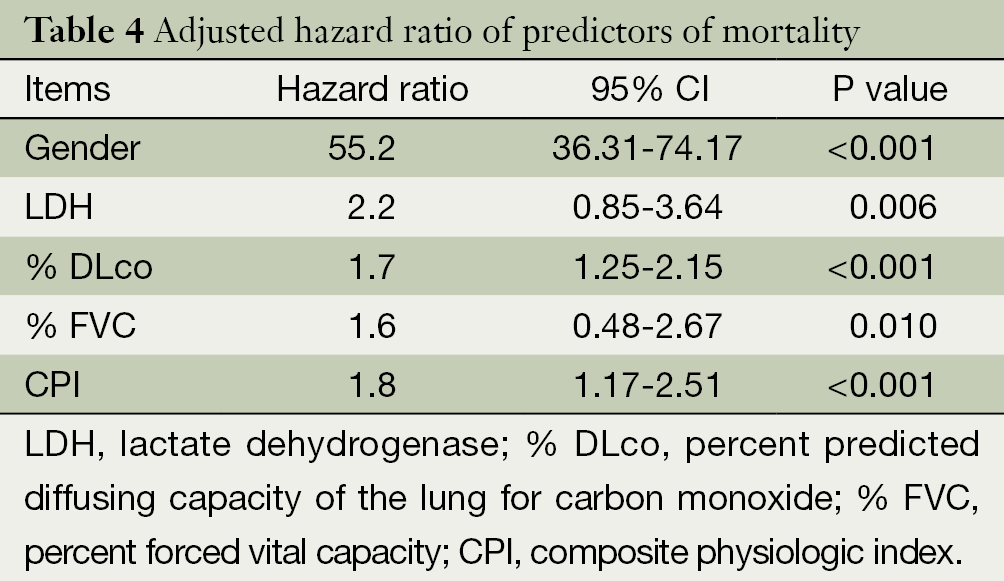 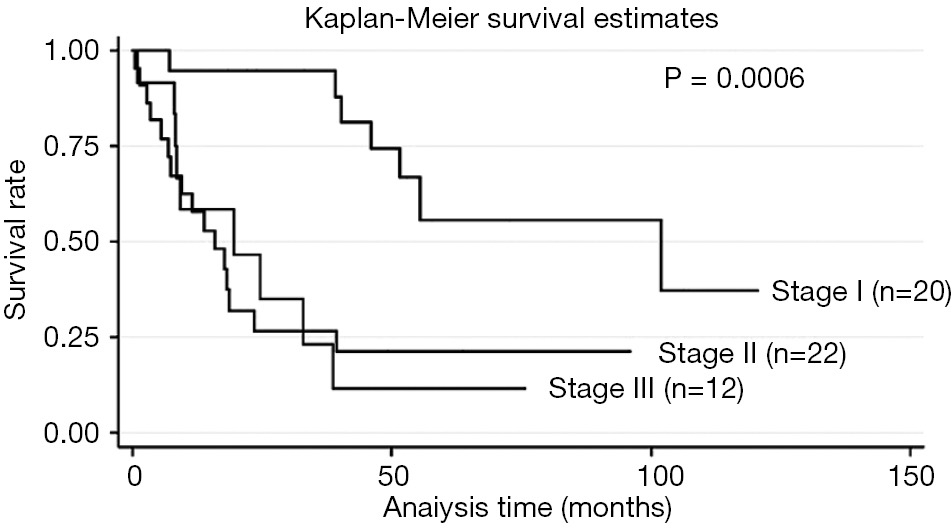 In this study, we determined the clinical characteristics of IPF patients in our hospital on the basis of the simple GAP staging system that was proposed by Ley et al. (14). For physicians, it is important to decide which patient to treat and how to monitor or predict the course of a progressive disease such as IPF. If we can employ simple variables and tools, it may be possible to create an applicable staging system for use in hospitals worldwide. Our study provides crucial findings for each stage of this GAP system for IPF patients.

Stage I patients tended to follow a good clinical course compared with stage II and III patients. This group of IPF patients had no evidence of pulmonary artery hypertension. Based on pulmonary function and CPI values, these patients had better preserved respiratory function. However, Kondoh et al. have shown that some IPF patients develop disease progression without any initial pulmonary function impairment (21). Thus, we should monitor disease activity carefully (22).

With respect to honeycombing, we considered Fleischner Society definitions (18,25). Stage II patients had the highest fibrosis scores and the majority of these patients received aggressive therapy (26,27). In our cohort, stage II patients had good prognosis slightly compared with stage III patients. Stage II patients may have had more good activities of daily living and slow progression partly with intensive treatment. In Figure 1, stage II patients had poor prognosis than stage III at some points. Possible reason is due to progressive fibrosis with high HRCT score. However, HRCT fibrosis score did not predict mortality completely in our cohort. One possible reason is stage II had less often had PAH than stage III. Vasculopathy or hyper coagulopathy may contribute more to both acute exacerbation and mortality in our IPF patients. In terms of physiology and imaging, we should follow up these two stages IPF patients carefully and require comprehensive management.

In contrast, our stage III patients had poor prognosis despite having similar fibrosis scores. One possibility was that the patients in this group had PAH as speculative. For IPF associated with PAH, both monitoring and management strategies have been proposed (28,29). Second is stage III patients had acute exacerbations more frequently compared with the patients in the other two groups. We receive many advanced IPF patients from other local hospital. Therefore, our rather high incidence of AE-IPF may be referral bias. Regarding acute exacerbations in IPF patients, we have recently proposed staging-based management (30).

In addition, our stage III patients exhibited greater increased mMRC breathlessness scale during 1-year observation. From the clinical perspective, cough has been proposed as providing prognostic information for IPF patients (31,32). We believe that this association between changes in mMRC breathlessness scale scores and IPF staging in our cohort is a novel finding. New Idiopathic Interstitial Pneumonias (IIPs) guidelines have proposed considerations of disease behavior (33). Serial monitoring of major clinical symptom trends is crucial for managing this progressive disease.

Finally, with regard to treatment, the antifibrotic drug pirfenidone was effective for stage I and stage II patients in our cohort, similar to the results of previous reports (34-37). However, our stage III patients progressed despite receiving pirfenidone. Recently, patients who showed greater declines in FVC were reported to have demonstrable responses to pirfenidone therapy (38). Sakamoto et al. also reported efficacy of pirfenidone for advanced-stage IPF patients (39). However, there is no consensus regarding which patients should be treated with pirfenidone. We need more large sample size for resolving these controversy issue.

There were several limitations in our study. First, this was retrospective study, small sample size and some clinical data were missing. Second, this was a single-center study with some selection bias. Thus, our results may not be applicable for all IPF patients. However, the epidemiological and clinical characteristics of our cohort were comparable to those of cohorts in previous reports. Third, we evaluated PAH with cardiac echograms and not by cardiac catheterization. Estimated pulmonary arterial pressure by cardiac echo were approximately 10 mmHg higher than catheter evaluation in 40-50%. Severe-stage patients could not undergo such an invasive procedure; thus, it was impossible to perform catheterization for all patients. However, we did comprehensive diagnostic approach including physical examination, blood test and chest imaging. In addition, the clinical courses of our patients with IPF and PAH were consistent with those of similar patients in previous reports.

In conclusion, we determined the clinical characteristics of IPF patients on the basis of GAP staging. Combined evaluations of dyspnea changes, PAH, GAP stages, and fibrosis scores are quite important for disease behavior and for predicting the mortality of IPF patients. Additional multicenter studies are essential for validating our proposal.