Obstructive sleep apnoea (OSA) is the most common form of sleep-disordered breathing, affecting up to 10% of middle-aged men and 3% of middle-aged women (1). It is characterised by intermittent and repeated episodes of upper airway obstruction during sleep and can result in irregular breathing at night and excessive sleepiness during the day (2). OSA is also associated with several co-morbidities, including hypertension (3), ischaemic heart disease (4), stroke (5), congestive heart failure (6), obesity (7), and diabetes (8).

Permanent tracheostomy was the first effective therapy for OSA, and it was the most common treatment used for OSA in the 1970’s and early 1980’s (9). The management of OSA was revolutionized in 1981 by the introduction of continuous positive airway pressure (CPAP), which can completely prevent upper airway occlusion during sleep in patients with OSA (10). In a subsequent study done 2 years later, Sullivan et al. also showed that CPAP is an effective treatment for patients with severe obesity-hypoventilation syndrome and can lead to remission of the underlying disordered breathing during sleep (11). Since its development in the 1980’s, CPAP has been shown to reduce the symptoms of OSA, improve the risk for associated co-morbidities, especially arterial hypertension, and potentially impact on mortality in patients with severe OSA (12,13).

According to current guidelines, CPAP therapy is the standard treatment in patients with moderate to severe OSA (14). The effectiveness of CPAP therapy, however, is dependent on patients’ adherence and symptomatic response to the treatment (15). At the least, one third of all patients initiated on CPAP therapy do not use the treatment at 5 years. Long-term CPAP use can be predicted by the uptake within the first 3 months and is dependent on disease severity and daytime sleepiness (16).

Because of the limited long-term compliance to CPAP, alternative treatments for OSA are required for those patients that fail to comply or respond to CPAP therapy. Mandibular advancement devices (MADs) have been developed to reposition the jaw and keep the upper airway patent during sleep. These devices have been shown to reduce the severity of OSA and improve daytime sleepiness. MADs are currently recommended for the treatment of mild OSA (17).

Since 2011, electrical stimulation of the upper airway dilator muscles has emerged as a potential alternative to CPAP, as upper airway patency is correlated with the electromyographic activity of the genioglossus muscle. Strollo et al. have shown that unilateral stimulation of the hypoglossal nerve by a surgically implanted neuro-stimulator device significantly reduces the severity of OSA, daytime sleepiness, and improves quality of life (18). Consequently, hypoglossal nerve stimulation (HNS) has recently been approved by the US Food and Drug Administration (FDA) to treat moderate to severe OSA (19).

HNS, however, involves the surgical implantation of a neuro-stimulator and is highly expensive. A non-invasive form of electrical stimulation could be advantageous in that it offers to assess patients with limited risk and at low costs. Continuous transcutaneous electrical stimulation (CTES) involves low-current stimulation of the genioglossus muscle. CTES has been shown to reduce ventilatory load and neural drive in patients with OSA to a similar degree as HNS (20). The efficacy of CTES as a treatment option for OSA, however, is still being evaluated. The current published studies on the non-invasive use of electrical stimulation have revealed varying results, which is likely to reflect the lack of standardisation of the approach (21).

We performed face-to-face interviews in outpatient and inpatient clinics in the Sleep Disorders Center and Lane Fox Respiratory Unit at Guy’s and St. Thomas’ NHS Foundation, London, UK in addition to using a web platform supported by a patients’ group to distribute a survey (local registration number 2014-4621).

We showed pictures of existing treatments (CPAP, MAD) and emerging treatments for OSA (HNS and CTES). The survey concluded by asking:

Participants were given the one page survey along with the pictures of the CPAP, MAD, HNS, and CTES. The online survey contained the same questions and pictures as the survey that was distributed in person. We did not answer questions about the survey or treatments in order to standardise the approach between face-to-face interviews and online participants. A link to the online survey was distributed by one of our expert patients at Guy’s and St. Thomas’ NHS Foundation Trust.

Data were analysed using GraphPad Prism (Version 5.02, GraphPad Software Inc., San Diego, California, USA) and SPSS statistics 20 (IBM, New York, USA). Data are presented as mean (standard deviation, SD) unless otherwise indicated. When we compared the data of the two subgroups of patients who underwent a face-to-face or an online interview, we used t-tests for continuous variables and Fisher’s exact test for categorical variables. We divided our sample of patients according to treatment preferences, and data were further analysed using a one-way ANOVA with a Kruskal-Wallis test and Dunn’s correction for multiple test comparisons. Lastly, logistic regression was employed to identify correlations between independent variables (gender, age, BMI, FOSQ10, ESS, OSA severity) and treatment preference for CTES as the dependent variable. A level of significance was defined as P<0.05. 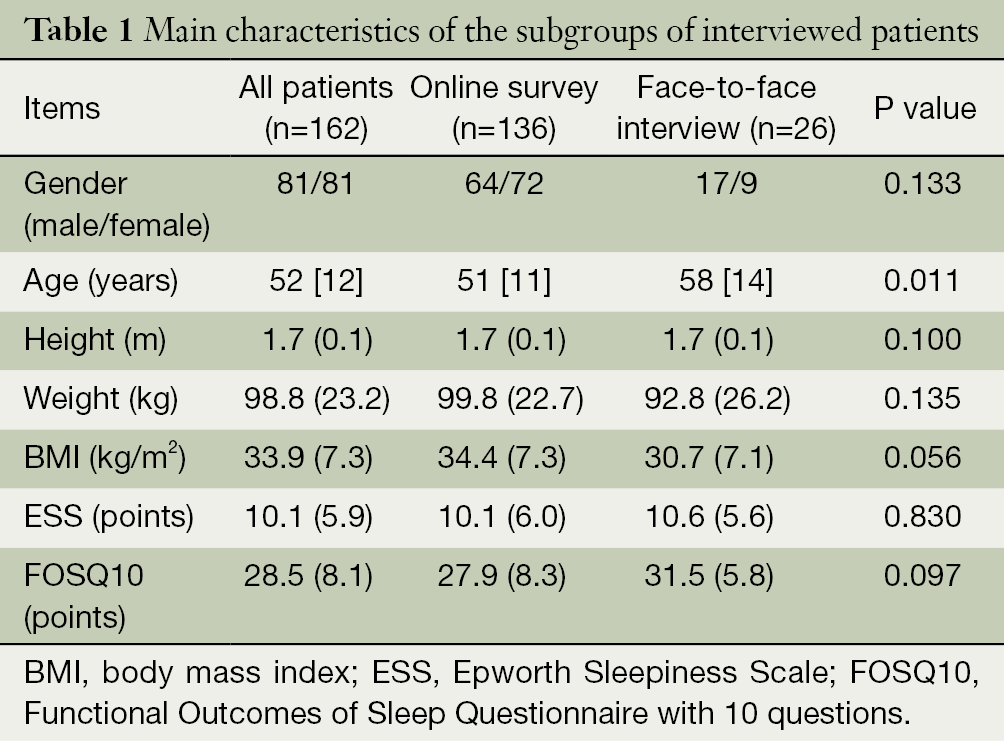 We combined the online and face-to-face interview groups to analyse the remaining data. The majority of the respondents (89.5%) had been diagnosed with OSA, and 46.9% of the patients had severe OSA. A total of 91.7% of the patients diagnosed with OSA were on treatment, while 8.3% were not receiving any treatment. A total of 95.4% of the respondents who received treatment were using CPAP, while 1.5% used MAD, and 3.1% used an alternative form of treatment. A total of 91.3% of all respondents were interested in more information and were willing to try emerging treatments, HNS or CTES. Most respondents (56.7%) preferred the potential use of CTES as a treatment for OSA, while 21.7% chose HNS, 17.8% preferred CPAP, and 3.8% the MAD (Figure 1). There were no differences between the patients who preferred different treatments in terms of age, BMI, gender, quality of life, and OSA severity (Table 2). A regression analysis included age, gender, OSA severity, quality of life, and daytime sleepiness as possible predictors of CTES preference. The analysis showed that a low ESS score was an independent predictor of patients preferring CTES (P<0.05, Table 3). 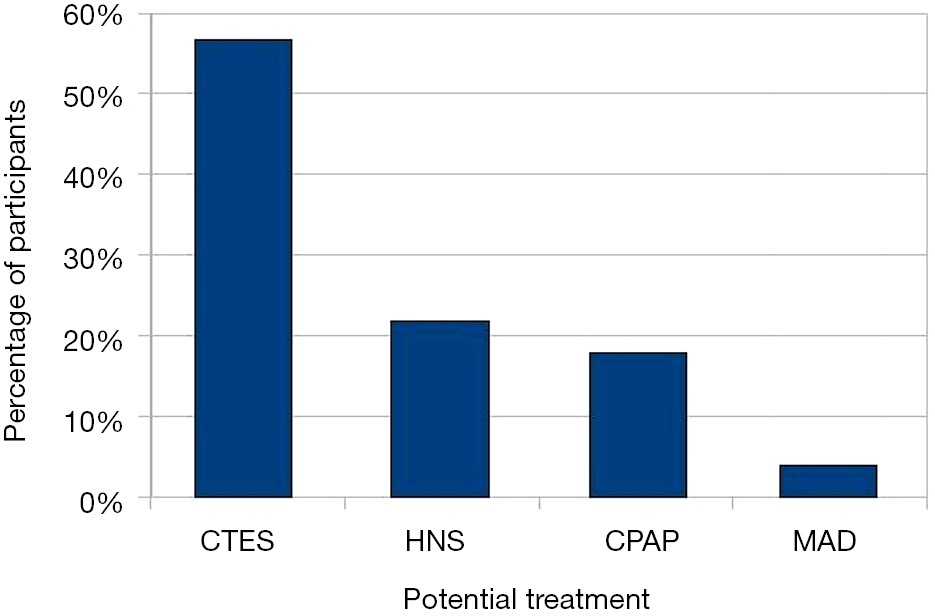 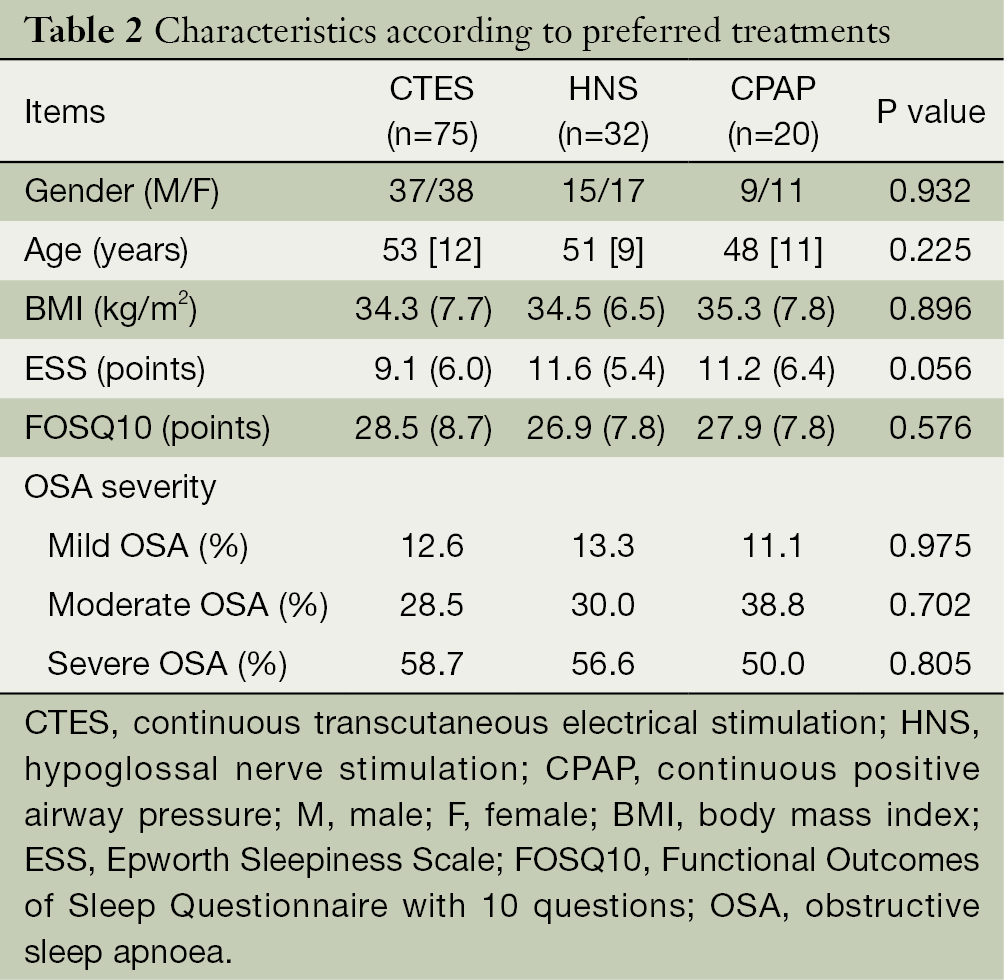 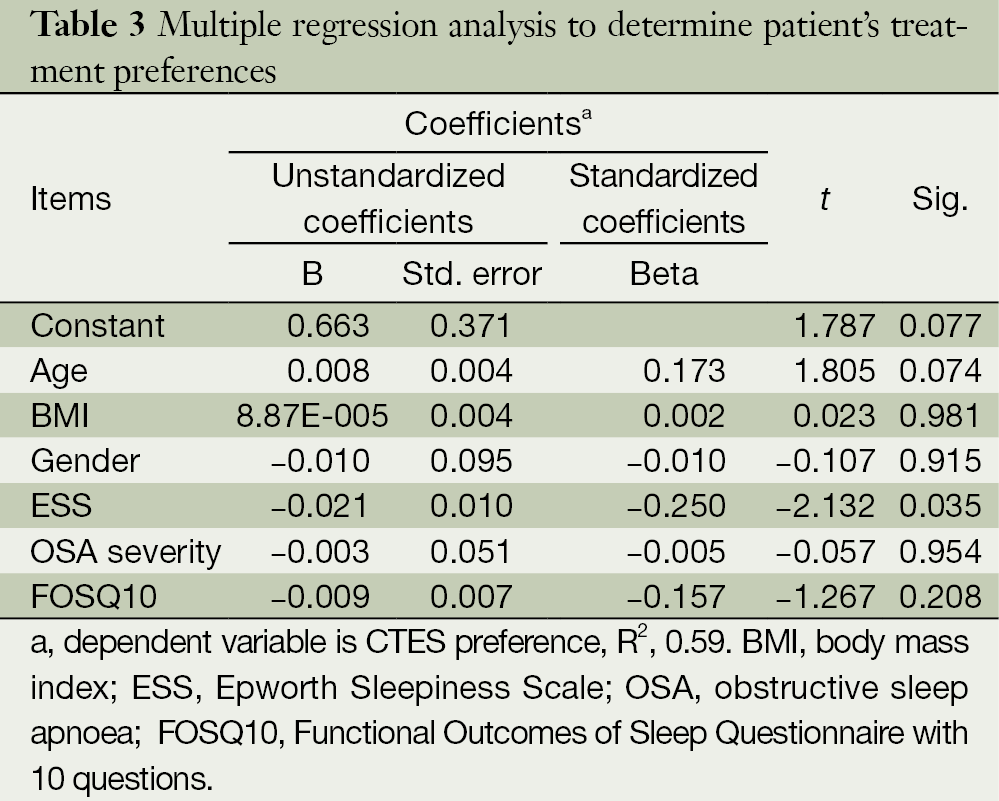 Over 90% of patients, most of them treated with CPAP, were interested in more information and were willing to try emerging treatments for OSA. Non-invasive electrical stimulation was the most preferred treatment compared with invasive electrical stimulation, and followed by CPAP and MADs. Less than one fifth of the respondents preferred to use CPAP, the current standard treatment for OSA. Less symptomatic patients, as demonstrated by a lower Epworth score, were more likely to choose a less invasive treatment option.

These results are important as new therapies for OSA are being developed. The biggest limitation of CPAP as a treatment for OSA is a relatively low long-term compliance, as demonstrated by McArdle et al., who found that more than one-third of patients started on CPAP do not use it at all after 5 years (16). The benefits of controlled OSA include a reduction in daytime sleepiness and, in addition, less complications due to associated co-morbidities, such as hypertension, ischaemic heart disease, and stroke. These benefits are not seen, however, if patients cannot tolerate and comply with long-term treatment.

It is crucial, therefore, that alternative treatments to CPAP therapy are developed and tested. While these therapies are being developed, we need to take patients’ preferences into consideration in order to achieve a good long-term compliance to OSA treatment, as it is likely that new treatments will not provide cure from the condition.

There are limitations to this study, however, with a limited dataset of only 162 patients filling out the survey. This was a pre-selected cohort of mainly patients on CPAP, and the results require cautious interpretation due to a potential reporting bias. Nonetheless, the survey can be used as a guidance of public and patient involvement for future research interests aimed at developing alternative treatments for OSA.

Compliance remains the most significant limitation of CPAP as a long-term treatment for OSA. Due to significant short- and long-term complications of untreated OSA, the development of alternative treatments to CPAP is crucial to guarantee patients’ adherence. The majority of patients that we tested preferred the potential use of emerging technologies and would potentially be available to test these methods in clinical trials. The preferred option was non-invasive electrical stimulation (CTES), followed by the invasive electrical stimulation (HNS), CPAP, and MADs. These findings are important in that they can be used to support future research applications into non-CPAP treatment methods for OSA.

We are grateful for the support of Richard Brown, Adam Birdseye, and Karen Bacon, who helped distribute our survey. This work was supported by the National Institute for Health Research (NIHR) Biomedical Research Centre based at Guy’s and St Thomas’ NHS Foundation Trust and King’s College London. The views expressed are those of the authors and not necessarily those of the NHS, the NIHR or the Department of Health.