The lung is one of the most radiosensitive organs, yet is frequently irradiated during treatment for thoracic malignancy. Radiation-induced lung injury often results in radiation pneumonitis and radiation fibrosis. Radiation pneumonitis becomes apparent at about 1 to 6 months after radiotherapy and fibrosis after at least 6 to 12 months. The association between pneumonitis and the development of fibrosis is still uncertain (1-4). Classically, the pathological and radiological changes caused by radiation are confined to the irradiated area. However, several reports have described an intense lymphocytic alveolitis not only in the irradiated lung but also in the non-irradiated lung. These changes have been demonstrated by diffusely increased gallium uptake, lymphocytosis in bronchoalveolar lavage (BAL) from non-irradiated lung, and a histologic pattern of organizing pneumonia from the migratory opacities (3,5-11).

The term “alveolitis” was proposed to define the inflammatory involvement of the lung parenchyma on the basis of cellular pattern obtained by BAL. Studies of the cellular constituents from BAL suggested that alveolitis may be categorized according to the cell type relevant to the pathological process. Therefore, eosinophilic alveolitis characterizes chronic eosinophilic pneumonia (CEP) (12). Recently, CEP was reported among the spectrum of radiation-induced lung injury in patients with a history of asthma and/or allergy (13,14). Generally, alveolitis with eosinophilic BAL caused by radiation is rare. In the present study, we report a case of migratory eosinophilic alveolitis in radiation pneumonitis, occurring 4 months after radiation therapy in a breast cancer patient without history of asthma or allergy. 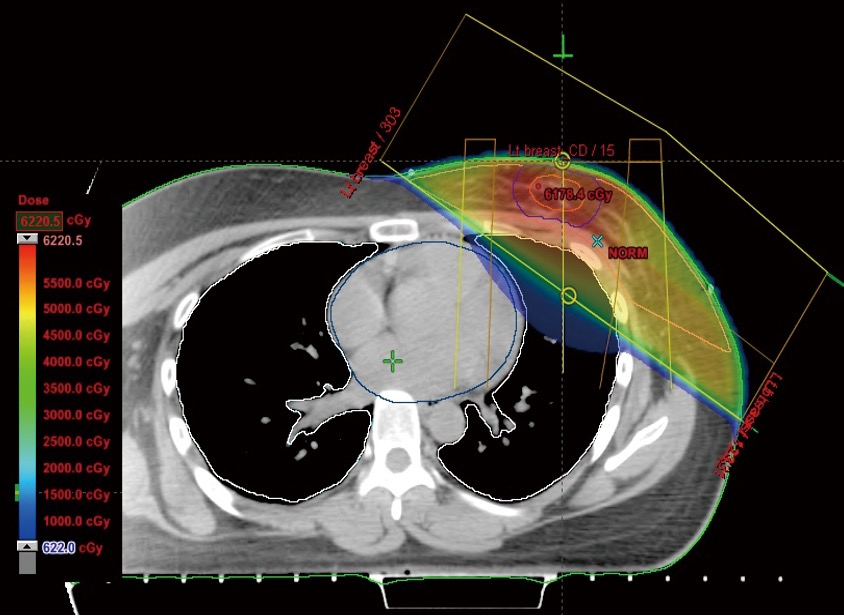 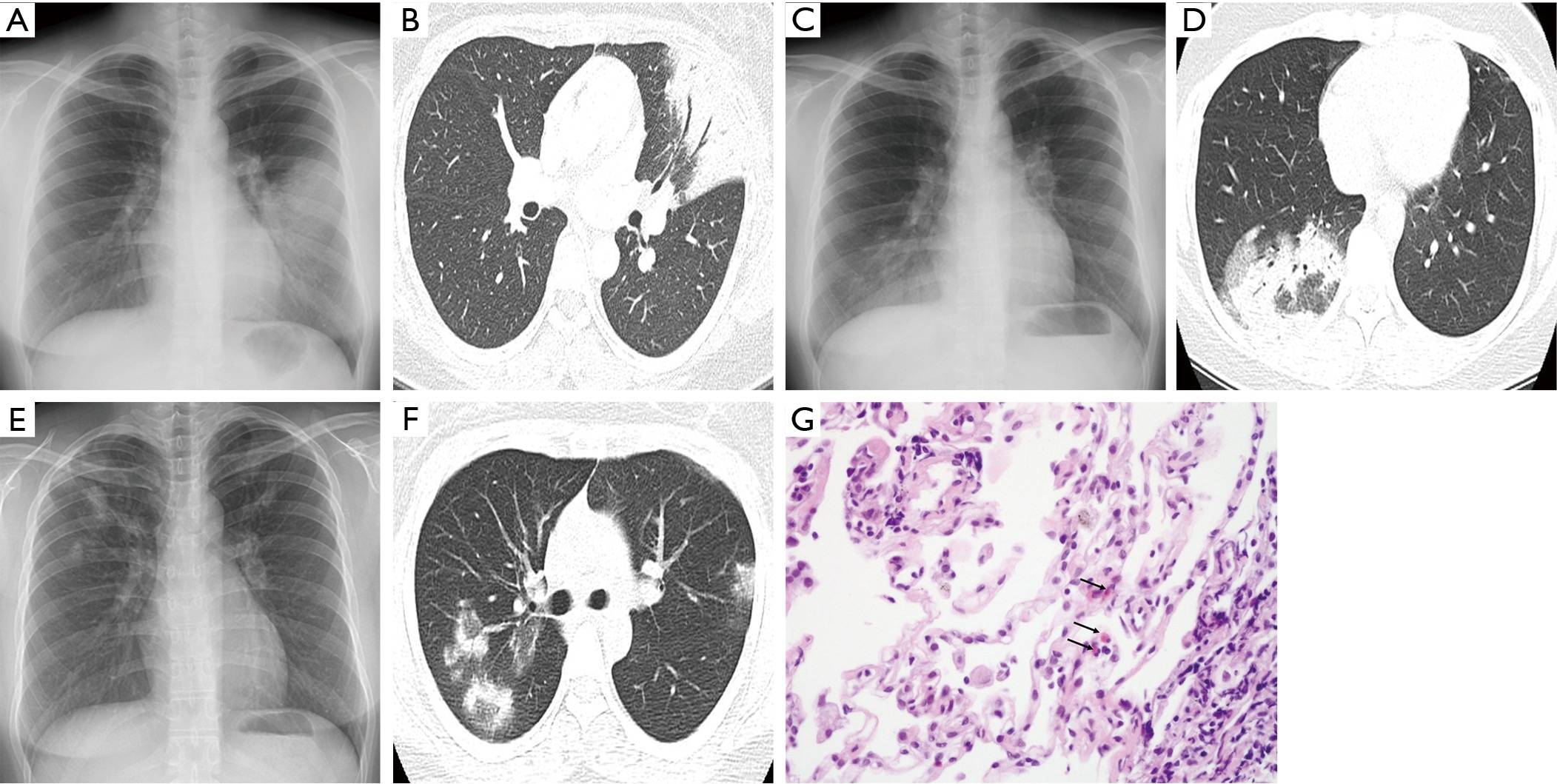 Figure 2 Chest X-ray (A) and computed tomography (CT) (B) during the first episode of alveolitis (4 months after completion of radiotherapy), showing airspace consolidation in the lingular segment of the left upper lobe (LUL). Chest X-ray (C) and CT (D) during the second episode (7.5 months after radiotherapy) showing patchy airspace infiltrates and consolidation in the lateral and posterior segments of the right lower lobe (RLL) and clearance of the previous LUL lesion. Chest X-ray (E) and CT (F) during the third episode (11 months after radiotherapy) showing multiple airspace consolidations in both upper lobes and clearance of the previous RLL lesion. Transbronchial lung biopsy specimen (G) showing chronic inflammation with several eosinophils (arrows) (H&E stain, ×400).

The patient was diagnosed with radiation pneumonitis and, because of the mildness of her symptoms, treated with inhaled steroids for 3 months. Two months later, she was asymptomatic, and chest X-ray confirmed that the left lung process had cleared. At 15 days after discontinuation of inhaled steroid treatment (7.5 months after irradiation), however, her chest discomfort and cough returned. Chest X-ray and CT indicated patchy airspace infiltrates and consolidation involving the right lower lobe (Figure 2C,D). At that time, laboratory data included a WBC of 6,380/mm3 (5.5% eosinophils), an immunoglobulin (IgE) of 658.19 IU/mL (normal, 0.00-183.00), an ESR of 39 mm/h and a CRP level of 1.95 mg/dL. Tests for antinuclear antibodies, rheumatoid factors and anti-neutrophil cytoplasmic antibody were negative. BAL of the lateral segment of the right lower lobe, yielded differential cell counts of 40% lymphocytes, 25% eosinophils, 2% neutrophils, 15% macrophages and 18% monocytes. As earlier, culture of BAL fluid revealed no organisms. Corticosteroid (prednisolone 0.5 mg/kg/day) was administered for 2 weeks, and consequent subjective and radiographic improvements were dramatic. The corticosteroid was then tapered and discontinued at 6 weeks.

Again, relapse occurred within 6 weeks after withdrawal of corticosteroid (11 months after irradiation), characterized by cough and new multi-airspace consolidations in both upper lobes (Figure 2E,F) and associated with a WBC of 6,950/mm3 (2.8% eosinophils), an ESR of 10 mm/h and a CRP level of 0.35 mg/dL. BAL and transbronchial lung biopsy at the posterosegment of right upper lobe indentified differential cell counts of 38% lymphocytes, 21% eosinophils, 2% neutrophils, 25% macrophages and 14% monocytes. Transbronchial biopsy demonstrated mild chronic inflammation with several eosinophils (Figure 2G). Histology and BAL fluid provided no evidence of infections or vasculitis. Corticosteroid (prednisolone 0.5 mg/kg/day) was reintroduced, and rapidly improved clinical signs and radiological opacities. The corticosteroid dose was gradually tapered and discontinued again with normalization of laboratory data after 4 months, and the patient did not experience symptom recurrence during 18 months of follow-up (Figure 3). 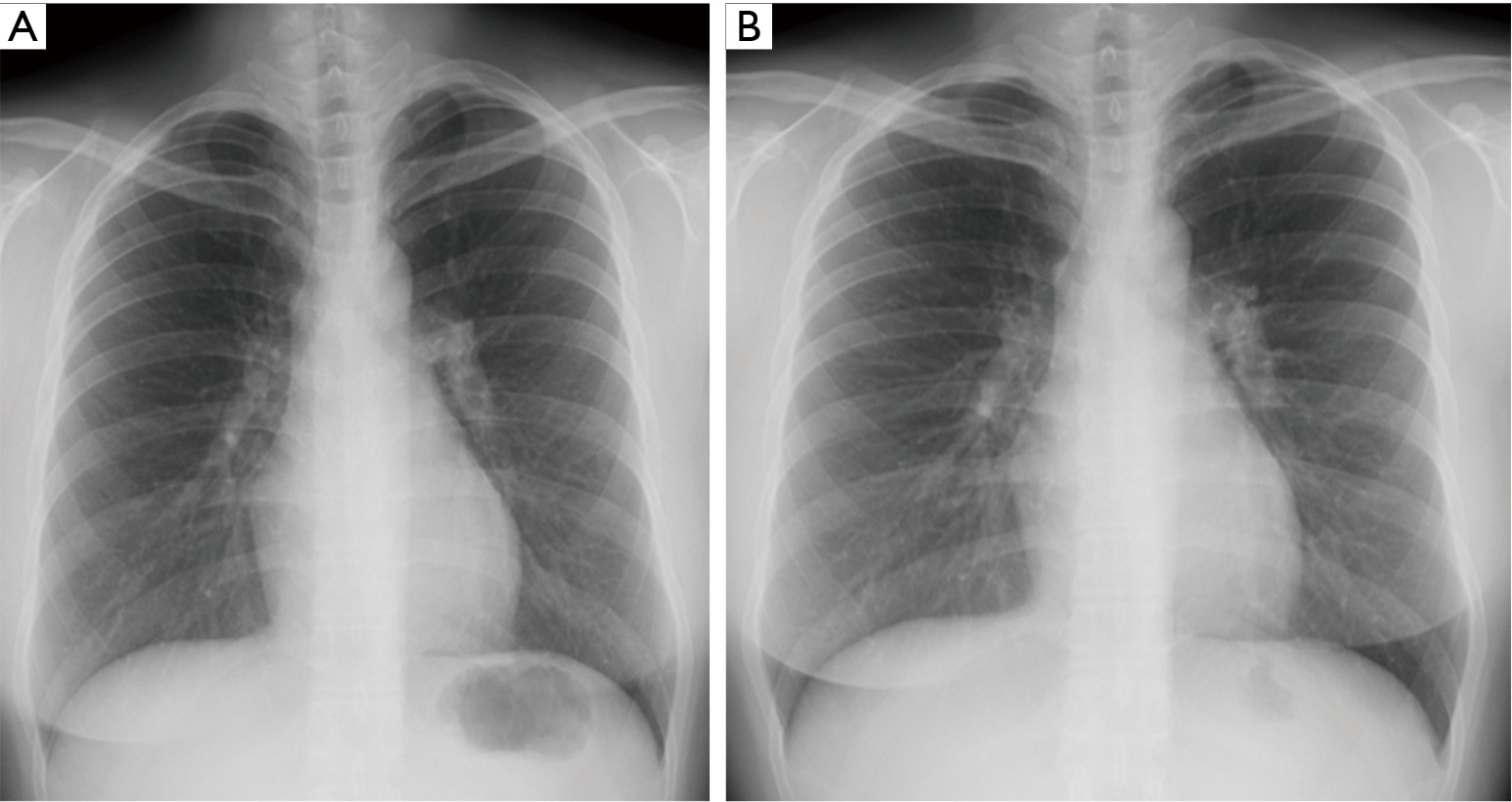 Figure 3 Chest X-ray upon discontinuation of corticosteroid therapy (A) and 18 months after (B) show complete clearing of pulmonary infiltrates.

The use of thoracic radiotherapy to treat cancer inevitably exposes normal lung tissues to radiation. The pathological processes of radiation injury begin immediately after radiation exposure, but the clinical and histological features may not become apparent for weeks, months, or even years after treatment. The effects of radiation injury are commonly classified as acute, consequential, or late, according to the time between exposure and appearance of symptoms. Acute effects are those that are observed during the course of treatment or within a few weeks after treatment. Consequential effects appear later, and are caused by persistent acute damage. Late effects emerge months to years after radiation exposure (1,2,4). Early literature reported the rate of symptomatic radiation pneumonitis ranges from 1% to 34%, whereas the rate of radiological changes ranges from 13% to 100% (15).

Radiation-induced lung injury is a type of inflammatory reaction of the lung tissue in response to radiation exposure (1,15,16). Marked lymphocytic alveolitis has been demonstrated not only in irradiated but also in non-irradiated lungs of radiation pneumonitis patients using BAL, used widely to investigate inflammatory reactions in the lung interstitium (4). Accumulation of lymphocytes, which consist predominantly of CD4+ T cells, is more pronounced in patients who develop clinical pneumonitis. These findings suggest that radiation may cause a generalized lymphocyte-mediated hypersensitivity reaction (3-5,7). Furthermore, characteristic organizing pneumonia or CEP with/without migratory infiltrates is often reported to follow radiation lung injury (8-10,13,14,17,18).

The originality of our case lies in the identification of eosinophilic BAL (17%, 25% and 21%, respectively) in migratory radiological opacities of a patient with radiation pneumonitis without history of asthma or allergy. Though a few previous cases have suggested that eosinophilic BAL may be present in radiation pneumonitis, its significance has not been elucidated (4,6,8,9,13,19). These cases suggest that radiation-induced lung injury may promote eosinophilic alveolitis, similar to its ability to promote lymphocytic alveolitis (3-9,11). We believe that in our case, eosinophilic alveolitis was related to irradiation. First, lung infiltrates were detected initially in the irradiated area, with a temporal relationship that fits with the usually reported delay between radiation exposure and acute lung disease (1,2). Second, other possible causes of eosinophilic pneumonia, such as drugs, toxic agents, infection, vascular collagen disease, or allergy, were excluded. Moreover, no histological evidence for other causes of eosinophilic pneumonia was found (20).

Generally, eosinophilic BAL in patients with radiation pneumonitis is rare. Although eosinophilic BAL has been reported in a few irradiated patients, the mechanism by which radiation induces eosinophilic alveolitis is unknown (4,6,10). A recent study has suggested that eosinophilic pneumonia may be primed by radiation, and then triggered by antigenic stimulation several months later (13). Recent progress in molecular pathology and radiobiology has improved the mechanistic understanding of radiation injury. The early phases of fibrogenesis after irradiation can be seen as a wound-healing response characterized by an almost immediate upregulation of pro-inflammatory cytokines such as tumor necrosis factor-α (TNF-α), interleukins 1 and 6 and many growth factors in the irradiated tissue. Especially transforming growth factor-β (TGF-β) plays an important role in radiation fibrogenesis (16). TNF-α and TGF-β are multifunctional cytokines, and chemoattractants for eosinophils (21,22). This function suggests that TNF-α and TGF-β could be part of the molecular mechanism linking radiation to eosinophilic alveolitis. Further investigation of this mechanism is warranted.

Eosinophils are toxic to airway epithelial cells, and are associated with lower response to treatment and steeper declines in pulmonary function in idiopathic pulmonary fibrosis, and with a poor outcome in lung transplant patients (6,23,24). However, several cases of radiation pneumonitis (6,8,9,13), including that presented here, have shown that corticosteroid therapy rapidly eliminates the clinical and radiological signs of eosinophilic BAL, even after relapse. These findings suggest that radiation-induced eosinophilic alveolitis may be a predictable clinical marker of the good response to corticosteroid therapy and responsible for the recurrent migratory radiological changes in radiation pneumonitis.