Lung cancer is the leading cause of cancer-related death in the People’s Republic of China according to the annual report on status of cancer in China in 2011 (1). Over the last decade, personalized medicine based on patients’ genetic profile has significantly changed the treatment of lung cancer. Anaplastic lymphoma kinase (ALK) rearrangement, discovered by Soda et al. in 2007, has been validated as a well-established therapeutic target in non-small-cell lung cancer (NSCLC) (2). In Chinese NSCLC patients, the prevalence of ALK rearrangement was reported to be 3.3-11.6% (3-5). Crizotinib was the first ALK tyrosine kinase inhibitor (TKI) to undergo clinical development in ALK-positive NSCLC and has had remarkable efficacy in this group (6-10). Crizotinib was approved in 2013 by the Chinese Food and Drug Administration for advanced ALK-positive NSCLC.

Brain metastases are most frequently associated with advanced lung cancer and in advanced ALK-positive NSCLC patients, 25-35% developed brain metastases (9,11). Previous studies indicated that crizotinib poorly penetrated the blood-brain barrier, which may restrict its anticancer effect in tumors with brain metastases (12). However, a recent analysis determined that crizotinib exhibited favorable clinical response in ALK-positive NSCLC patients with brain metastases (13). Unfortunately, after an initial clinical benefit acquired resistance inevitably occurs, and central nervous system (CNS) is a common site of progression in ALK-positive patients treated with crizotinib (12,14,15). In clinical practice, molecular-targeted therapy is increasingly being continued beyond progression, especially in patients with CNS failure or oligo-progressive disease (PD) (15). Ou et al. described the survival benefit of continuing crizotinib treatment beyond progression in 120 patients with advanced ALK-positive NSCLC (16). In addition, in oncogene-addicted NSCLC patients developing CNS failure or oligo-PD, the use of local ablative therapy and continuation of the targeted agent could provide an additional 6 months of disease control (15).

From June 2008 to March 2015, a total of 120 patients with advanced ALK-positive NSCLC treated with crizotinib at the Guangdong Lung Cancer Institute (GLCI) were enrolled in this study. All patients received crizotinib at an initial dose of 250 mg twice daily with appropriate dosing modification as needed. ALK rearrangement was detected before initiation of crizotinib. All tissues used for ALK rearrangement assay were obtained from the GLCI tissue bank and informed consent was obtained from each patient for genetic analyses before any biopsy was performed. Patients’ clinical data were extracted from electronic medical records at the GLCI. This study was approved by the Institutional Review Board of Guangdong General Hospital (GGH).

Patients were categorized into two groups as with (n=82) or without (n=38) brain metastases at baseline (Figure 1) prior to crizotinib treatment. We divided patients with brain metastases into two subgroups based on the local treatment history for brain metastases before initiation of crizotinib. In this analysis, continued use of crizotinib was allowed for all patients if the physician believed the patient could still achieve clinical benefit. CNS failure was defined as progression of pre-existing or development of new intracranial lesions in the presence of good disease control elsewhere in the body. For patients with CNS failure, the second progression-free survival (PFS) benefiting from crizotinib continuation beyond PD was measured.

ALK rearrangement was detected by either fluorescence in situ hybridization (FISH), rapid amplification of cDNA ends-coupled polymerase chain reaction (PCR) and sequencing or immunohistochemistry (IHC). FISH detection was performed on unstained 4-μm-thick formalin-fixed, paraffin-embedded tissue slides using the Vysis LSI ALK Break Apart FISH Probe (Abbott Molecular, USA) according to the manufacturer’s instructions. Only tumors with >15% of tumor cells having a positive break-apart FISH signal were considered to have ALK rearrangements. RACE-coupled PCR and sequencing was conducted as reported previously (3).

Brain imaging at baseline was required for patients enrolled in clinical trials, and if brain metastases existed, follow-up brain imaging would be required. For patients in clinical practice, brain imaging at baseline was carried out only if patients had symptoms or signs of brain metastases. Local treatment strategy for brain metastases included whole brain radiotherapy (WBRT), stereotactic radiosurgery (SRS) and surgical resection. IHC staining was also conducted on 4-μm-thick formalin-fixed, paraffin-embedded sections using Ventana anti-ALK (D5F3) rabbit monoclonal primary antibody (Roche Diagnostics, Germany). Detection was performed according to the manufacturers’ protocol. Each sample was matched with a rabbit monoclonal IgG negative control. The presence of strong granular cytoplasmic staining in the tumor cells (any percentage of positive tumor cells) was deemed as ALK-positive, while the absence of strong cytoplasmic staining in the tumor cells indicated that they were ALK-negative.

Brain imaging at baseline was required for patients enrolled in the clinical trial, and when brain metastases were found, follow-up brain imaging was completed. For patients in clinical practice, brain imaging at baseline was carried out only if patients had symptoms or signs of brain metastases. The local treatment strategy for brain metastases included WBRT, SRS and surgical resection. The radiographic response to crizotinib treatment was evaluated according to Response Evaluation Criteria in Solid Tumors (RECIST) (17,18). The objective tumor response was evaluated every 6-8 weeks. Additional assessments were performed based on clinical circumstances.

PFS was defined as the time from commencement of crizotinib treatment to first documentation of PD or death from any cause, and censored at the date of last radiological assessment (when carried out). The second PFS was calculated from the time of first documentation of PD until second radiological disease progression or symptom deterioration. Overall survival (OS) was measured from the date of metastatic NSCLC diagnosis to death resulting from any cause and censored at the last follow-up date. The last follow up was on April 23, 2015.

The χ2 or Fisher’s exact tests were used to compare qualitative data. The Kaplan-Meier method was used to estimate survival and differences among patient groups analyzed by the log-rank test. A Cox regression model was used to calculate hazard ratio (HR) and its 95% confidence interval (CI). Statistical analysis was performed using SPSS version 22.0 software (IBM, Armonk, NY, US). All statistical tests were two-sided and P<0.05 was deemed to indicate statistical significance.

The clinical characteristics of the 120 patients at baseline were similar between patients with or without brain metastases (Table 1). All patients were of Chinese ethnicity. The median age of all the patients was 48 years and the majority of patients (78.3%) were never-smokers. The most common histologic subtype was adenocarcinoma (96.7%). A total of 45 (37.5%) patients received crizotinib as a first-line treatment. 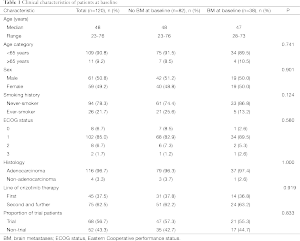 Patients with brain metastases at baseline and response to crizotinib treatment 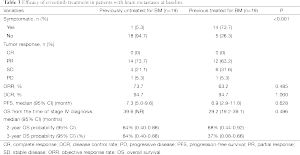 Incidence of CNS progression and benefit from continuation of crizotinib

Costa et al. recently reported the clinical response of intracranial metastases to crizotinib treatment, and their results showed that the systemic PFS was similar for patients with or without brain metastases at baseline (13). This difference could be explained by the composition of patients included in the study, as this was the first study to include only Chinese ALK-positive patients. We noted that the ORR of crizotinib in Chinese ALK-positive patients was higher than that in non-Asian patients (20), which suggested that there might be a slight difference in crizotinib efficacy between Chinese and non-Asian patients. Another possible reason for this difference was the sample size of 120 compared to 888 as this was a single institutional retrospective study with a smaller sample size than previous multi-center studies. However, the present study was still useful because it provided a better understanding of the actual efficacy of crizotinib in Chinese ALK-positive patients.

Jackman et al. proposed that patients who experience isolated CNS failure might not have systemic acquired resistance to TKI therapy (21). Thus, the management of patients with isolated CNS failure should be distinguished from that of patients with systemic progression. In addition, previous reports have showed that continuous administration of TKI following local treatment after CNS failure appeared to be a valid treatment option (15,22). This treatment paradigm is now recommended by National Comprehensive Cancer Network guidelines and our study confirmed that this treatment strategy was suitable for Chinese ALK-positive patients.

There are several limitations of this study. First, this was a single institutional retrospective study. Larger multi-institutional randomized trials are required to validate the efficacy of crizotinib in patients with brain metastases at baseline. In addition, in this study, FISH, RACE-PCR and IHC were combined in detecting ALK rearrangements and the guidelines for the ALK rearrangement assay in China are different from those in the US and EU. All three methods were recommended by a consensus opinion of Chinese experts and have been approved as companion diagnostic tests by the Chinese Food and Drug Administration (23). Furthermore, this study only included a small sample size of patients who developed CNS failure and the OS was immature for analysis. Therefore, we did not compare the OS between patients who continued crizotinib treatment beyond PD and those who did not. Further investigations in a larger number of patients are needed to determine whether this strategy is beneficial.

Funding: This study was supported by the following (I) Guangdong Provincial Key Laboratory of Lung Cancer Translational Medicine (grant no 2012A061400006); (II) special fund for research in the public interest from National Health and Family Planning Commission of People’s Republic of China (grant no 201402031); and (III) research fund from Guangzhou Science and Technology Bureau (grant no 2011Y2-00014).