Appropriate pre-operative staging is a cornerstone in the treatment of non-small cell lung cancer (NSCLC). Identifying patients with imaging occult mediastinal nodal involvement prior to surgery is important to prevent futile thoracoscopies. Factors which increase the risk of imaging occult mediastinal disease have been identified and their presence is used to decide on the need for preoperative invasive mediastinal staging by endoscopic needle techniques or mediastinoscopy. However, there are discrepancies between different guidelines on the characteristics which should lead to invasive mediastinal staging. The European Society of Thoracic Surgeons (ESTS) (1) and National Comprehensive Cancer Network (NCCN) (2) recommend invasive mediastinal staging in all tumors larger than 3 cm while the American College of Chest Physicians (ACCP) (3) does not consider tumor size in their recommendations. When examining the evidence cited by the ESTS and NCCN guidelines, only two studies demonstrating a low negative predictive value of integrated positron emission tomography (PET-CT) to detect occult mediastinal disease in this population are cited (4,5). Another characteristic cited by all three above mentioned guidelines is central tumor location. Although all guidelines cite central tumor location as an indication for invasive mediastinal staging, the definition of a central tumor remained elusive until recently. This was well highlighted by a survey published by Casal et al. (6) demonstrating large discrepancies between physicians in what was considered a central tumor. Since this survey, Shin et al. (7) explored different definitions of central tumor location in a large cohort of radiologically N0 NSCLC and found only one definition which was significantly associated with the presence of occult mediastinal disease: a lesion located within the inner one-third of the hemithorax delimited by concentric lines arising from the midline. In another study, Casal et al. (8) also identified two definitions associated with upstaging to any N in T1N0M0 patients but the association did not remain when focusing on N2/3 disease. Larger tumors have a greater chance of having a central portion due to their size, hence of being considered central, this may explain the relationship between tumor size and imaging occult mediastinal disease. Tumor size could also be a predictor of occult mediastinal disease, independently from tumor location.

Given this background, we conducted a retrospective study to compare the prevalence of occult mediastinal disease in central and peripheral radiological N0 NSCLC larger than 3 cm. We present the following article in accordance with the Strengthening the Reporting of Observational Studies in Epidemiology (STROBE) reporting checklist (available at http://dx.doi.org/10.21037/jtd-20-1565).

Using the prospectively maintained database of the lung cancer investigation clinic of the Institut Universitaire de Cardiologie et de Pneumologie de Québec (IUCPQ), we retrospectively identified all patients with radiological N0 NSCLC which were investigated in our institution from 01/01/2014 to 31/12/2018. The study was approved by local Research Ethics Board (CRIUCPQ, 2019-3070), and informed consent was taken from all the patients. The study was conducted in accordance with the Declaration of Helsinki (as revised in 2013).

Patients who did not undergo confirmatory surgical lymph nodes dissection after a negative invasive staging procedure, with synchronous lung tumors, previous history of lung cancer and final pathology of small cell lung cancer, carcinoid tumor or pulmonary metastasis from another organ were excluded. Patients who did not undergo CT and PET-CT or for whom radiology reports of CT and PET-CT were not available were excluded.

Tumor location was determined from axial, sagittal and coronal images if a CT was available. If CT images were not available, axial images from PET-CT were used. Location was defined based on the most central portion of the tumor. Central tumor was defined as located in the inner one-third of the hemithorax adopted by drawing concentric lines from the midline, based on a recent study (7).

All images were blindly reviewed by MF and JG. If location reported by MF and JG differed, a senior radiologist reviewed images and made the final decision. All tumor sizes were measured based on their long axis on CT. Tumors were classified according to 8th TNM classification (9). For T3 and T4 NSCLC based on the presence of multiple lesions in the same lung, we measured the largest lesion to determine tumor size.

Our primary objective was to compare the prevalence of occult mediastinal disease in central and peripheral radiological N0 NSCLC larger than 3 cm. Our secondary objectives were to assess the impact of tumor size and location on the prevalence of any occult nodal disease (pN1-3) and the negative predictive value of PET-CT for pN1-3 and pN2/N3 disease according to tumor location.

Data was compared using the Chi-square or Fisher tests for categorical variables, and the t-test or Mann-Whitney test for continuous variables depending on the Gaussian distribution of the variables. OR and 95% confidence intervals (CIs) were calculated from binary logistic regression models for pN1-3 upstaging (versus pN0) and pN2/N3 upstaging (versus pN0/N1). A multivariate logistic regression analysis was used to adjust for potential confounding factors in the association between central tumour and occult N2 disease. All statistical results were 2-sided and a P value <0.05 was considered significant. All analysis were performed with the Prism software (GraphPad Software Inc., California, United States) and SAS software (version 9.4 of the SAS System for Windows). 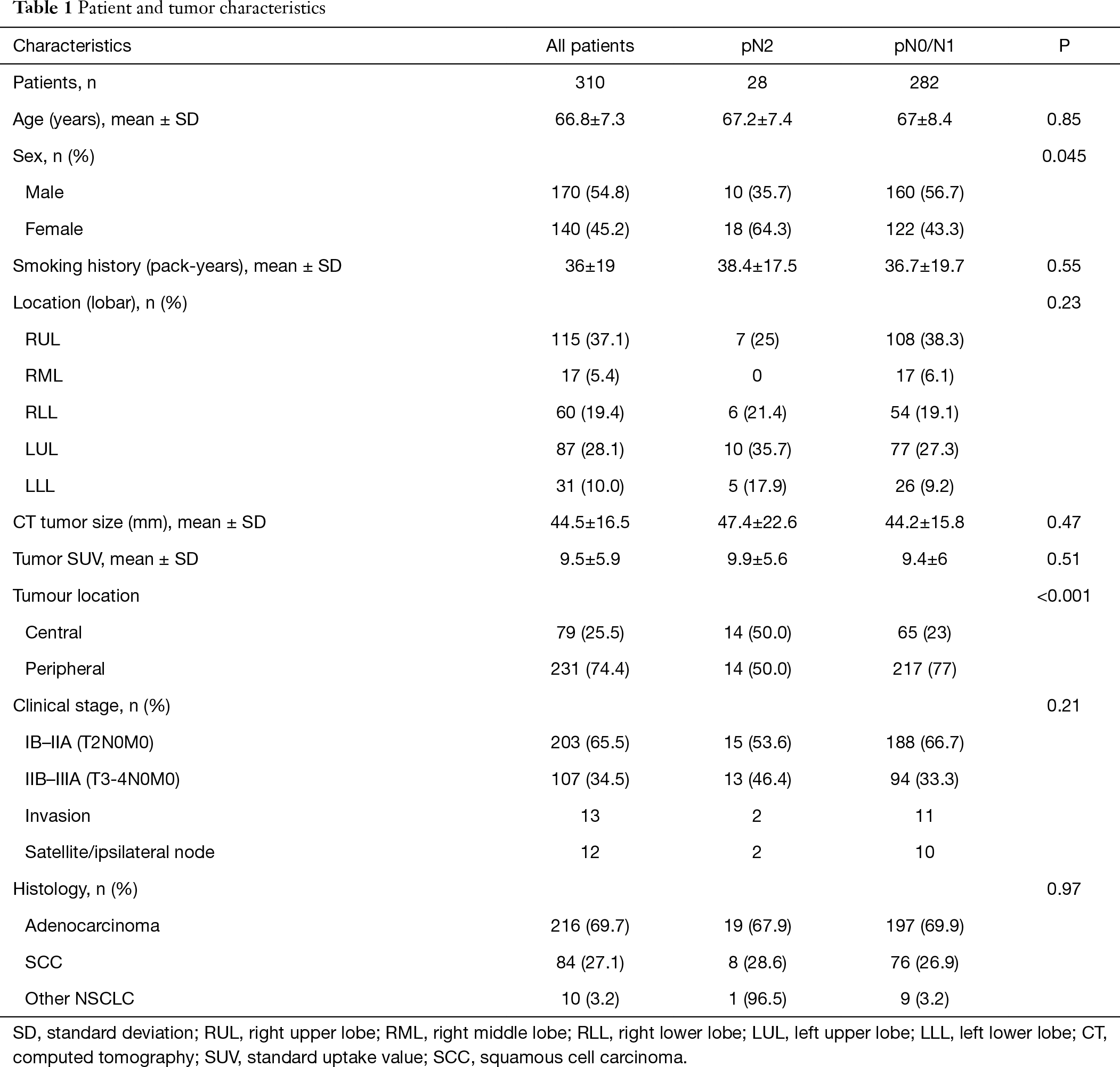 One hundred and eighty-three patients (59.0%) underwent invasive mediastinal staging prior to surgery, mainly by endobronchial ultrasound-guided transbronchial needle aspiration (EBUS-TBNA) (72.1%) (Table 2). Centrally located tumors were associated with an increased rate of invasive mediastinal staging (78.5% vs. 52.4%), and confirmatory mediastinoscopy after a negative EBUS staging (43.7% vs. 12.5%). Two occult N2 metastases were found after EBUS staging and these two patients were not operated. All other patients underwent surgical mediastinal nodal dissections (Table 2). The mean number of dissected nodal stations was 4.3±1.4, including 2.5±1.1 mediastinal nodal stations. No differences in the number of nodal stations assessed during the surgery were reported between central and peripheral tumors. 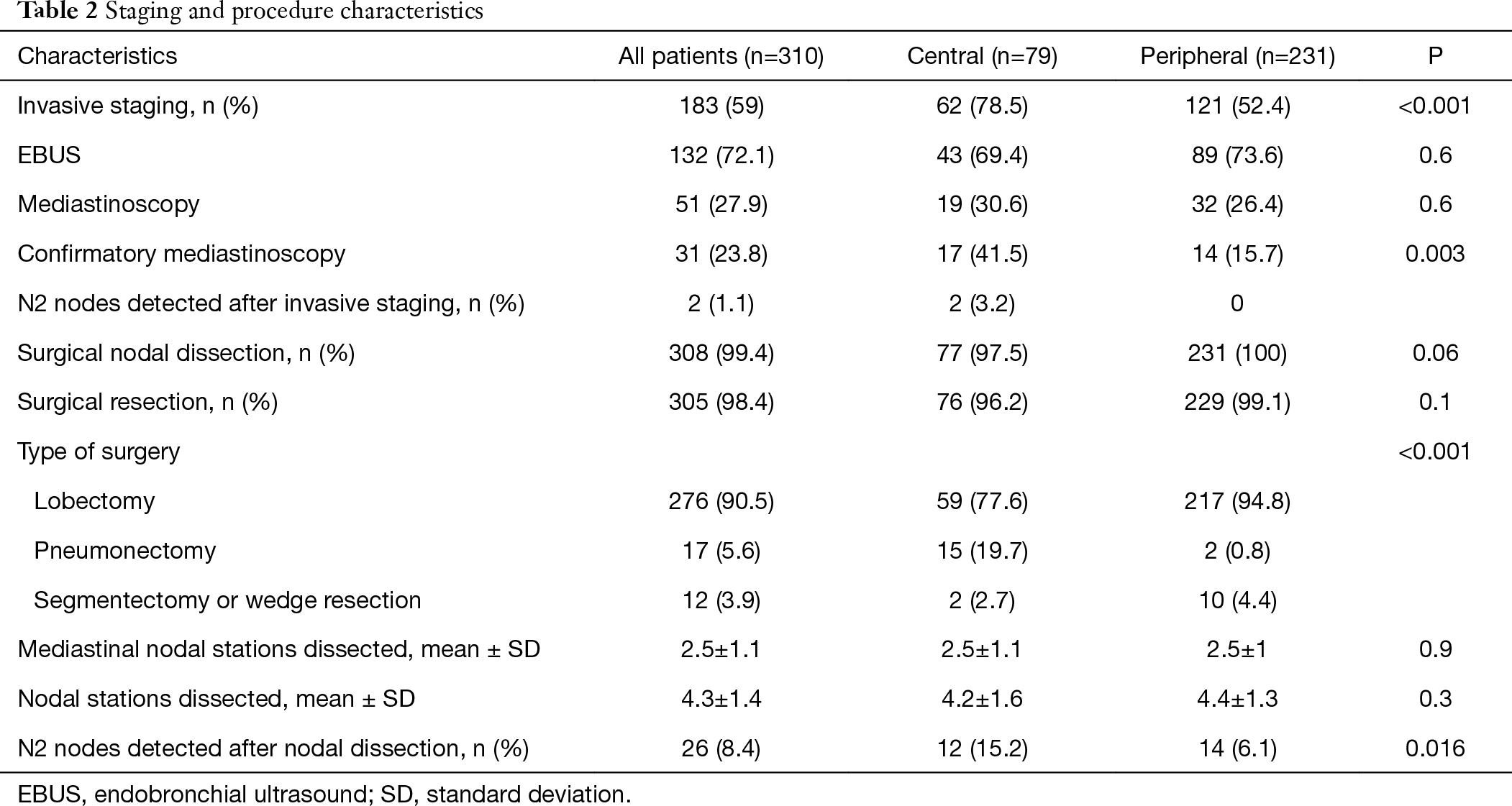 Figure 1 Risk of nodal upstaging according to the clinical T stage and the location of the tumour. NSCLC, non-small cell lung cancer.

Guidelines provided by the ESTS and the NCCN include tumor size above 3 cm as an indication for invasive mediastinal staging. This recommendation is based on the results of two studies. The first is a meta-analysis which reported a 89% NPV for PET-CT to detect any nodal upstaging in NSCLC larger than 3 cm while the NPV was 94% in NSCLC smaller than 3 cm (4). Tumor location was not considered in this meta-analysis. One could speculate that larger tumors are more likely to be central due to their size which could have driven the findings. The second is a smaller single center study limited to 153 peripheral tumors which found a NPV for PET-CT to detect mediastinal disease of 85% in peripheral NSCLC larger than 3 cm while the NPV was 92% in peripheral NSCLC smaller than 3 cm (5). Tumor centrality was defined by the absence of contact with the intrapulmonary main bronchi, pulmonary artery, pulmonary veins, or the origin of the first segmental branches. This definition never proved to be associated with occult mediastinal disease in subsequent studies and may have misclassified certain tumors as peripheral thus decreasing the NPV of PET in peripheral tumors.

Since the publication of these guidelines, studies attempting to define tumor centrality have been published to reconciliate previous studies which yielded variable conclusions as to the relationship between central tumor location and occult mediastinal disease. Casal et al. focused on cT1N0M0 patients and failed to identify a definition of central tumor associated with an increased prevalence of occult N2/N3 disease despite a robust 607 patients study exploring 8 different definitions (8). Decaluwé et al. did not limit themselves to T1 lesions but again were not able to find a definition of central tumor associated with an increased prevalence of occult N2/N3 disease (10). Both studies did find an association between tumor centrality and upstaging to any N. In a third study, Shin et al. included tumors irrespective of size and found only one definition which predicted occult N2 disease: a lesion located within the inner one-third of the hemithorax delimited by concentric lines arising from the midline. They hypothesize that this definition, which they were the only group to study, may have been associated with occult mediastinal disease due to skip metastasis to the mediastinum from apical tumors which are not considered central according to the more commonly used definitions which are based on concentric circles arising from the hilums or contact with central structures. As this study focused on defining tumor centrality, the impact of other factors, such as tumor size, on the prevalence of occult disease mediastinal was not explored after adjustment for tumor location. Univariate analysis did demonstrate a significant relationship between tumor size and occult mediastinal disease. The fact that we did not find this relationship in our cohort may be explained by the exclusion of smaller tumors. Yang et al. (11) previously demonstrated that the relationship between tumor size and occult mediastinal disease dissipates for further increase in tumor size above 3 cm. Likewise, tumor location was determined by physicians. However, all images were blindly and independently reviewed by two pulmonologists, and in case of divergence by a senior radiologist. Moreover, most of tumor location were defined from a CT scan using axial, coronal and sagittal views and not only from axial images, in order to obtain the most relevant classification.

We elected to limit our study to cN0 patients as cN1 patients already have a well demonstrated indication for invasive mediastinal staging with a 25% prevalence of occult mediastinal disease regardless the location of the tumor (13,14). We also excluded cT1N0M0 tumors as our team and Casal et al. (8) have previously demonstrated that despite being central, cT1N0M0 tumors remain at low prevalence of occult mediastinal disease.

Preoperative knowledge of N1 disease may modify management if radiation therapy or a sublobar resection are the planned treatment and this should be considered when staging a patient if these treatments are planned. CT and PET CT were associated with an 80% negative predictive value for detecting N1-3 disease in peripheral cT2-4N0 NSCLC hence further staging is necessary in this population prior to radiation therapy or sublobar resection. If the patient is a lobar resection candidate, occult N1 disease discovered at surgery will modify postoperative but not intraoperative or preoperative management. Because of the heterogeneity of patients with locally advanced stage III NSCLC, making an optimal decision for management of these patients is complex. Surgery has long been considered as the optimal treatment for resectable disease. It should be emphasized that multi-modality therapy combining chemotherapy and radiation therapies in addition to surgery (either as neo-ajuvant or adjuvant) improve outcomes compared to surgery alone (15). For unresectable stage III disease, concurrent chemoradiation is the preferred treatment and consolidation with durvalumab reported good outcomes in term of progression free survival (16).

This retrospective study suggests that invasive mediastinal staging is required in central cT2-4N0 NSCLC but can be questioned in peripheral one, especially in cT2N) subgroup if the patient is a candidate for lobar resection. Further larger prospective studies to validate this finding are necessary.

Reporting Checklist: The authors have completed the STROBE reporting checklist. Available at http://dx.doi.org/10.21037/jtd-20-1565

Conflicts of Interest: All authors have completed the ICMJE uniform disclosure form (available at http://dx.doi.org/10.21037/jtd-20-1565). The authors have no conflicts of interest to declare.

Ethical Statement: The authors are accountable for all aspects of the work in ensuring that questions related to the accuracy or integrity of any part of the work are appropriately investigated and resolved. The study was approved by local Research Ethics Board (CRIUCPQ, 2019-3070), and informed consent was taken from all the patients. The study was conducted in accordance with the Declaration of Helsinki (as revised in 2013).