The bronchial stump support has been recommended to reduce the risk of a bronchopleural fistula in patients undergoing pneumonectomy, especially in those with neoadjuvant treatment (1). For this purpose, the bronchial stump is usually covered by tissue flaps, such as pericardium, pleura, omentum, and muscle flaps including intercostal, latissimus dorsi, serratus anterior, and diaphragm muscles (2,3). Therefore, the use of the diaphragmatic muscle flaps has not been popular in thoracic surgery, and several visceral herniations in the early follow-up period have been reported (4). Here in this report, we presented a patient with visceral herniation, detected 5 years after a pneumonectomy for non-small cell lung cancer operation with a diaphragmatic muscle flap support on the bronchial stump. He underwent an emergency thoraco-laparatomy 9 years after the first surgery due to acute abdomen symptoms. To our knowledge, this is the first reported case with visceral herniation in the late period undergoing repair.

A 54-year-old man presented to the thoracic surgery clinic complaining with sudden and severe abdominal pain, accompanied by right chest pain, vomiting, and nausea. He had underwent a right pneumonectomy due to non-small cell lung cancer (squamous cell carcinoma) after a neoadjuvant chemotherapy, 9 years ago in our clinic (Figure 1). A diaphragmatic muscle pedicle flap had been used to reinforce the bronchial stump following pneumonectomy. A chest roentgenogram showed a total opacity in the right hemithorax. The computed tomography of the chest demonstrated abdominal visceral organ herniation into the right side of the thorax (Figure 2). Although a small visceral organ herniation had already been detected 5 years after pneumonectomy during a follow-up consultation which was not present in the previous visits, and the patient had been offered to undergo repair, he had refused any surgical intervention since he had been asymptomatic. Then, he was lost to follow-up. The patient had no history of an abdominal or chest trauma, or any disease after the pneumonectomy operation. 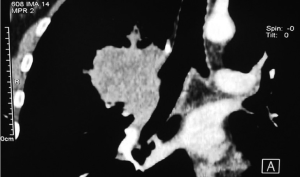 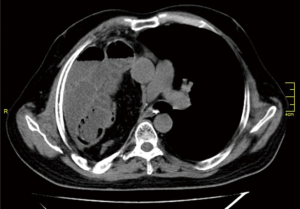 The patient was operated on through a right thoracoabdominal incision at the supine position. The right hemithorax was filled with transverse colon, small bowel, and omentum through a diaphragmatic defect. Some parts of the small bowel were aperistaltic, and showing signs of ischemia, but after warm compressing these parts of the bowel became normal, and thus there was no need for an intestinal resection. Following the reduction of the visceral organs into the abdomen, the diaphragmatic defect was repaired using a mesh.

Our patient developed visceral herniation 5 years after the pneumonectomy operation. He was advised to undergo surgery for repair when the small herniation was detected, but he denied the proposal since he had been asymptomatic. Later on, he admitted with signs and symptoms of acute abdomen 9 years after surgery, and underwent an urgent diaphragmatic repair with an uneventful recovery. To our knowledge, this is the first reported case about the late development of a visceral herniation after diaphragmatic muscle flap usage.