A chest drainage system with a real-time pressure monitoring device

It is not practical to have medical personnel stay by the bedside to monitor such change over a long period. Therefore, timely and accurate clinical decision making may vary according to the level of clinical experience. When the recovery is not adequate and the lung expands very slowly, the tube may stay in place for a protracted period after surgery or after tube thoracostomy. Intermittent observation is a way to check on the functioning of the tube and expansion of the lung. However, such observation is subjective and obviously not continuous. If an objective and continuous recording system, including flow rate and fluids, as well as certain warning mechanisms are also utilized, there is greater certainty about the time of lung recovery or proper warning that tube dysfunction has occurred. The current chest drain system cannot be checked retrospectively because there is no recording unit on it. Once it is possible to check the recording system retrospectively, it will also be possible to determine the time point when the fluctuation has ceased. As a result, the management of the chest drain tube and observation of chest recovery will become more objective and accurate.

The literature on the detection and measurement of pleural pressure is currently limited to a pre-procedure evaluation of disease severity (3) and its correlation with physiologic changes (4-6). The application of post-procedure monitoring has been reported in a limited research articles (7). From the studies by Jiménez MF, et al., initial air leak monitoring can be indicative of prolonged air leak after pulmonary lobectomy.

In the study, we tested the feasibility and efficacy of a low-cost and real-time pressure monitoring device in combination with the currently used chest drain system.

The animal study protocol was approved by the animal ethics committee in the animal center of Tamsheui Mackay Memorial Hospital.

The main components of the device included a pressure sensor, amplifying circuits, a display unit and a storage unit.

The pressure sensor we used in the study was a SCC05DN (Honeywell Inc.), which is a type of strain gauge. The detection range was from −100 to +100 cmH2O with an accuracy of 0.5%. The circuits are designed so as to digitalize and amplify the signal exerted by the pressure sensor based on the principle known as the “Wheatstone bridge” in which small changes in amplitude can result in a great difference in output voltage (Figure 1A). It is an amplifying circuits to enhance signal collection by the device. Because such a sensor is sensitive to the operating temperature, we calibrated the pressure sensor to function in 25 degrees Celsius before we proceeded to the animal study. The basic assembly is shown in Figure 1B. 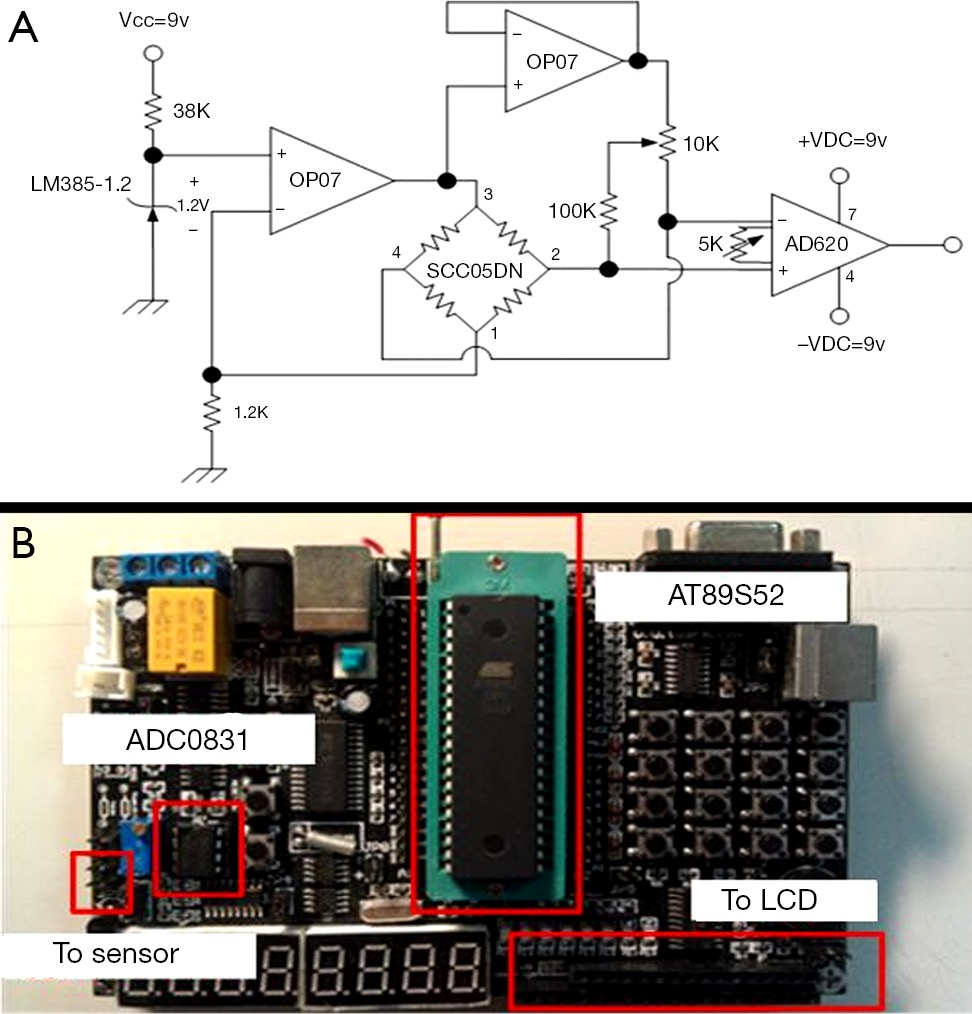 Figure 1 The basic design of the circuits around the sensor and its amplifying design using the “Wheatstone bridge” principle. (A) The actual board with circuits and the areas connected to the sensor and to the display unit are shown (B).

Then the correlation between the voltage and the actual pressure was tested for its reliability before proceeding to the animal study. A three way connector was used to link the sensor device, along with a 50 mL syringe. Different water heights were used to delineate the relation between the actual pressure, measured pressure and corresponding voltage (Figure 2). Subsequently, LABview software was used to perform pressure data acquisition, amplification, display and recording. The interval for recording the changes in the intra-pleural pressure was approximately 1,000 Hz under the operating current of 1.0 A. 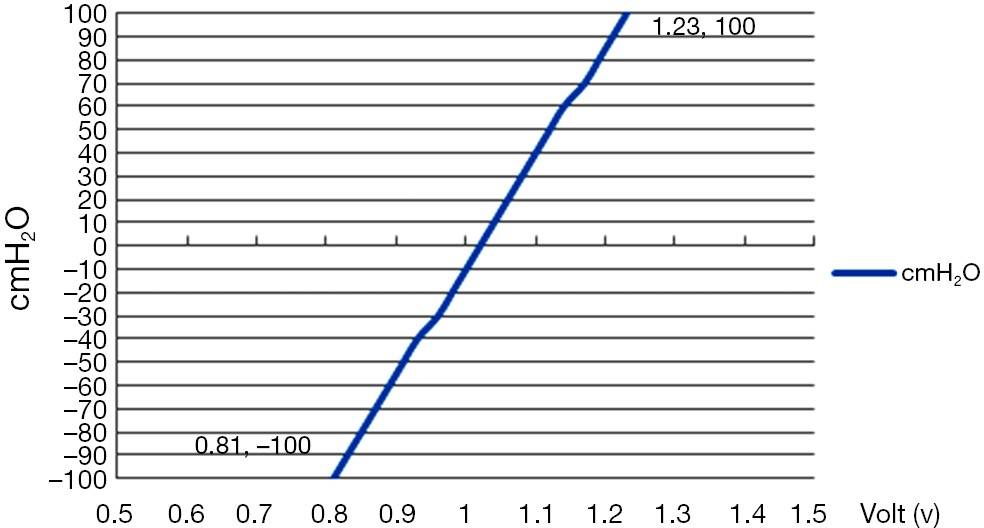 Figure 2 Before programming the LABview software, it is necessary to establish the correlation between the actual pressure and its corresponding volts. The ideal correlation is linear, as in the figure.

The second step is to combine this detection device into the current chest drain system. The basic configuration of this device is that it is connected to free space before the water-seal, which is shown in Figure 3. The pressure in the free space before the water seal is equivalent to that in the pleural space. In addition, the pressure sensor has to be kept apart from fluids. 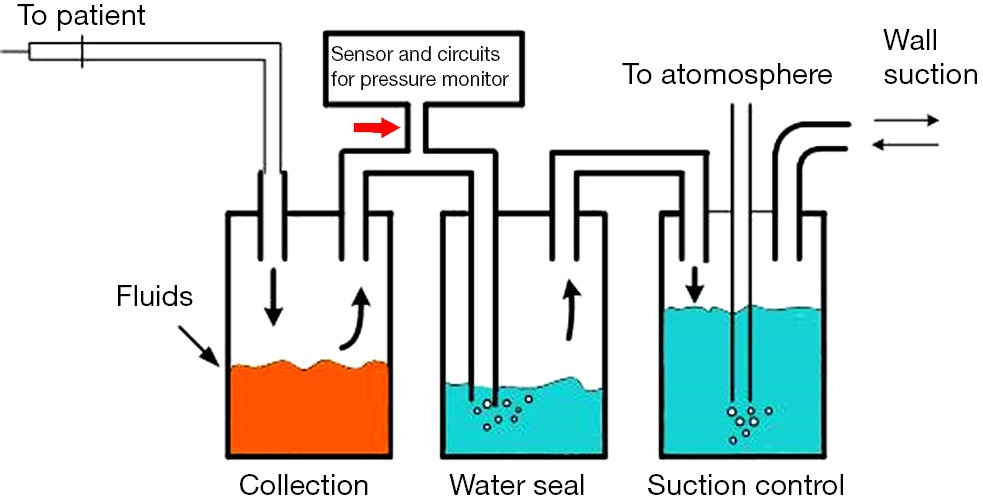 Figure 3 The device is connected to the second part of three-bottle chest drain system (the red arrow) to ensure the space is communicating with the pleural cavity.

The animals were two 40-kg pigs. After intramuscular injection of the muscle relaxant, the pigs were intubated with a single lumen endotracheal tube. Then the depth of anesthesia was maintained with inhalational anesthetics. We then used a thoracoscopic approach with a single tiny incision to enter the pleural space on the unilateral side. Then, under endoscopy, endoscopic scissor was used to cut the lung tissues and artificially created air leaks. Then, a chest tube of 32 Fr. was inserted in the pleural space, after which, the tube was connected to the chest drain system. The natural course of the initial air leaks and pressure fluctuation was recorded in the device for later analysis. After the test procedure, the two pigs were injected with a bolus of potassium chloride into the heart to sacrifice them at the end of the study.

In the animal study, the pressure changes after the lung had been cut to create air leaks were monitored. Because the pigs were ventilated, the pleural pressure was positive. Initially, the pressure vigorously went upwards to 16.5 cmH2O and fluctuated rapidly. After continuous monitoring for 900 seconds, the extent of the fluctuation declined slowly (Figure 4). 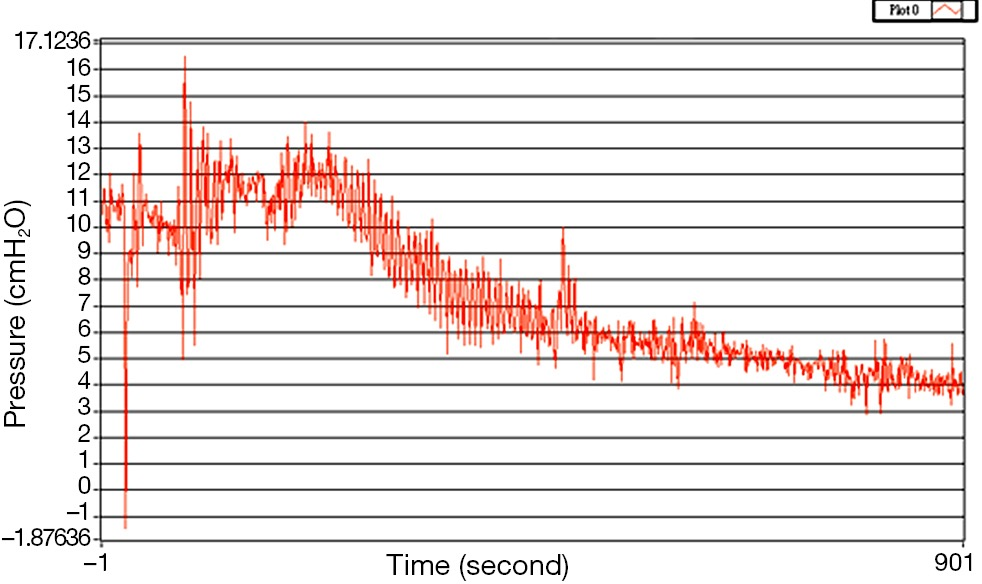 Figure 4 In the animal study, we used thoracoscopic surgical instruments to artificially create lung injury resulting in a marked air leak. The baseline pressure before artificial lung injury was around 10 cmH2O. Then the drain system was prepared for monitoring and recording. The pressure changes were initially very large and then declined, reducing the extent of the fluctuation.

After waiting for nearly one hour after the initial procedure, a time point when gross appearance of the changes in fluid height in the water-seal bottle had ceased, the pressure sensor showed the curve fluctuated minimally around 0 cmH2O (Figure 5). 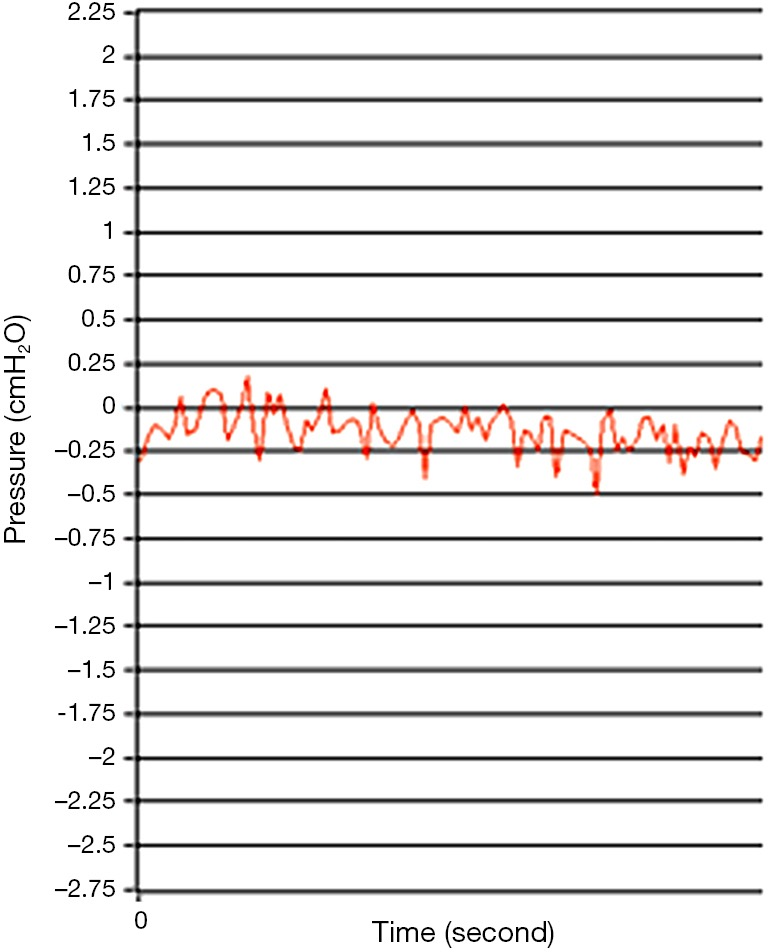 Figure 5 After waiting for nearly one hour, the fluctuating range was minimal, indicating that the air leaks had improved and the lung gradually expanded. Even when gross inspection showed a complete absence of the tidaling phenomenon in the water-seal bottle, the pressure changes was still evident. The changes were confined to a narrow range.

The changes in height of the fluid level in the water-seal bottle correlated well with the real-time pressure monitor. The response of the sensor is very rapid. In addition to the delineation of the pressure curve, the digits of each sampling time point were recorded in the storage unit. Retrospective analysis is therefore feasible. 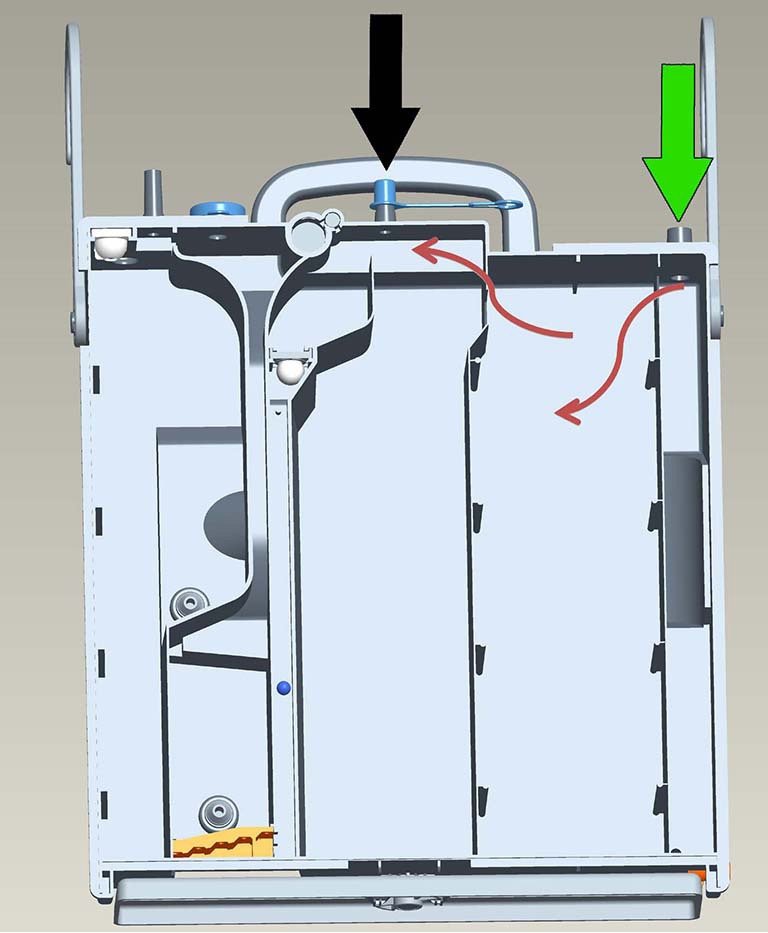 Pleural pressure can be indirectly measured by an esophageal catheter, as proposed by Chartrand et al. (8) A great many factors may influence the accuracy of such an indirect method (9-12). However, direct measurement is possible when a drain tube is in place. An estimation of pleural pressure can be used as an indicator of the severity of disease and a measure of respiratory function, as proposed by Feller-Kopman et al., in 2009 (13) and other researchers (14,15). Abnormally high pleural pressure may result in decreased coronary perfusion or venous return (16) and is potentially hazardous to heart function (17-21). Therefore, identifying the problem by means of a real-time monitor device is critically important in the clinical setting. However, the literature on pleural pressure measurement is mostly limited to the method of esophageal catheter. We abandoned the catheter method because it is invasive, indirect and unreliable. Direct measurement of the pleural pressure in our design does not require an additional invasive probe or catheter. 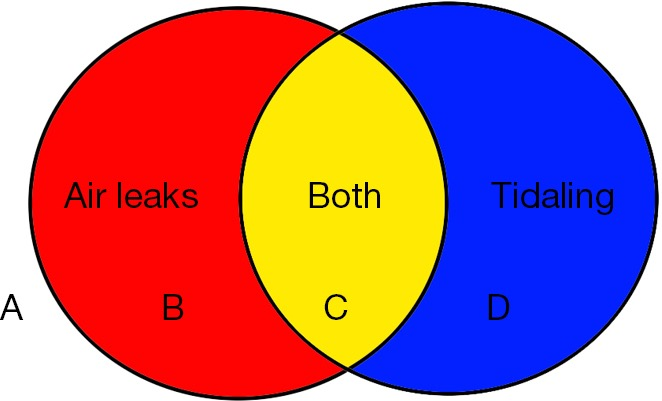 Figure 7 The clinician is able to judge the pleural condition or tube function by careful inspection of the water-seal bottle. There are four possible combinations of the two factors.

There are at least two advantages in adding the device to current chest drain system. The first is that it is possible to objectively define the range of pressure fluctuation. Because the range of pressure fluctuation directly correlated with the extent of lung expansion, an objective recording is a more dependable method of evaluating the patient’s recovery. Even when the patient goes home with a tube and bag, if a pressure sensor device available, a patient has the capacity to evaluate his own recovery at home. A second advantage is to clearly identify the exact time point when the lung has completely recovered, which means the time point that the fluctuation of pressure has ceased. Accurate knowledge of the point at which the lung has expanded adequately enables the clinician to remove the chest tube earlier with a high degree of confidence.

Another condition arises when the resection is extensive and the remaining lung is unable to expand completely, in which case the fluctuation curve confined in a certain range during normal respiratory cycle. Under this condition, the pressure will fluctuate in a range below zero cmH2O. If there is an intermittent air leak, the pressure is higher than zero cmH2O at times. If intermittent air leak is a concern, the pressure data can be retrospectively reviewed to determine the seriousness of the problem.

At times, the lung may be severely compromised by infection or cancer. In such a condition, inadequate lung expansion is seen upon imaging, but there is no vigorous fluctuation of the pressure curve. This means that further expansion of the remaining lung is not possible and this can help the clinician decide to remove the drain tubes.

The absence of air leaks or tidaling phenomenon on gross inspection is not necessarily equivalent to zero pressure. The gross inspection showed no water height changes in the period shown in Figure 5. However, the actual readings of the four pleural cavities with the fully expanded lung were confined between +0.2 to −0.25 cmH2O. The cause of this difference is the surface tension of water. Therefore, the device gives a more detailed reading of the pressure changes. Future clinical study is needed to evaluate the range of pressure fluctuation when the gross inspection of air leaks shows they have ceased. In the human case, the range of these readings is currently unknown. If the appropriate data are obtained, it may be possible in the future to define the term “full expansion” in a more objective and accurate way.

The proposed device for measuring pleural pressure is a low cost, innovative design. This is important, because a device be effective but expensive, limiting its usefulness. The proposed device is intended as an adjunct to the conventional chest drain system that makes the interpretation more objectively accurate. The cost is approximately 50 US dollars. In addition, the connection can be closed, making the system back into a conventional drain system (Figure 6).

In the future, this device will be modified so as to be wireless and to have a warning system. When the tube is accidently disconnected or becomes non-functional, timely and proper management is thus facilitated.

The study is an experimental study, with only two pigs. The results may not be easily reproducible in humans. The currently study results are preliminary. The immediate clinical advantage and practical application is still not clear. A proper clinical investigation is required and will be taken up in the near future.

The proposed real-time pressure sensor device may be useful as an adjunct to current chest drain system by providing more accurate and objective interpretation of a patient’s recovery.

The authors would like to thank the National Taipei University of Technology and Mackay Memorial Hospital, Taiwan for financially supporting this research under Contract No. NTUT-MMH-103-02.