Valvular heart disease (VHD) is a growing public health problem (1). Congenital and acquired VHD remains a predictable cause of heart failure and an important cause of sudden death (2,3). The prevalence of VHD in industrialized countries is estimated to be 2.5%, and increases with age (3). After the age of 65, the incidence of VHD increases significantly (4). Of all VHD subtypes, aortic valve disease has the worst prognosis and a higher mortality rate (5).

The bileaflets which have achieved long-term clinical application, especially the St. Jude and Carbomedics bileaflets, constitute more than 70 percent of clinical valve types and are recognized as the most excellent artificial mechanical heart valves (7-9). Most previous studies are case report, or only reported short-term clinical effects. The CL-V bileaflet is a brand new Chinese-made prosthetic valve. The present study is the first trial evaluating the mid-term outcome results of the CL-V bileaflet mechanical heart valve after implantation in Chinese patients. We present the following article in accordance with the STROBE reporting checklist (available at http://dx.doi.org/10.21037/jtd-20-2644).

All patients underwent a median sternotomy incision at medium temperature ranging from 27 to 32 °C under general anesthesia with cardiac-pulmonary bypass. The operation was performed via a membrane oxygenator under cardiac arrest and the patients were perfused with cold cardioplegia solution. Continuous suture was performed for mitral valve replacement, and interrupted suture was performed for aortic valve replacement. If a left atrial thrombus was found, left atrial embolectomy was performed. If tricuspid insufficiency was severe, valvuloplasty was not performed. After the operation, assisted circulation was provided to patients until circulation, breathing, arterial blood gas and electrolyte levels were satisfactory. The respirator was then stopped, the respiratory tube was drawn, protamine was used for neutralization, then hemostasis and sternal closure were performed. After the patient was transferred to the ICU, a respirator was used continuously to control breathing, and other treatments such as electrocardiograph monitoring and invasive blood pressure monitoring were implemented.

After the patient was stabilized, the patient was transferred to a general ward. Warfarin (domestically produced) was taken orally at 18:00 on the 2nd or 3rd day postoperatively with a first dose of 3.75 to 5 mg. Anticoagulant detection was conducted 48 hours later, then the dose was adjusted according to the monitoring data. The prothrombin time (PT) was adjusted to 1.5 times that of the control value, and the international normalized ratio (INR) was 1.5 to 2.5. After the operation, no patient took anti-platelet drugs.

All patients returned to the outpatient department for reexamination at 1, 3, 6 and 12 months after discharge and annually thereafter. Examination included: inquiry about subjective symptoms, physical examination, laboratory examinations, chest X-ray, transthoracic Doppler echocardiography, evaluation of cardiac function, and observations of prosthetic valve-related complications. The details of the follow-up were recorded on a form and follow-up examination data were filed.

Continuous variables are expressed as mean ± standard deviation (SD) and categorical variables are expressed as numbers (percentages). The statistical significance of continuous data were tested using a Student’s t test or the Mann-Whitney U test, depending on whether there was a Gaussian distribution. A Chi-square test or Fisher’s exact test was used to determine statistical significance of categorical data. A P value of less than 0.05 was considered to be statistically different. All data were calculated and analyzed using Software Package for Statistics and Simulation (SPSS; version 22.0, IBM Corp Armonk, NY, USA). 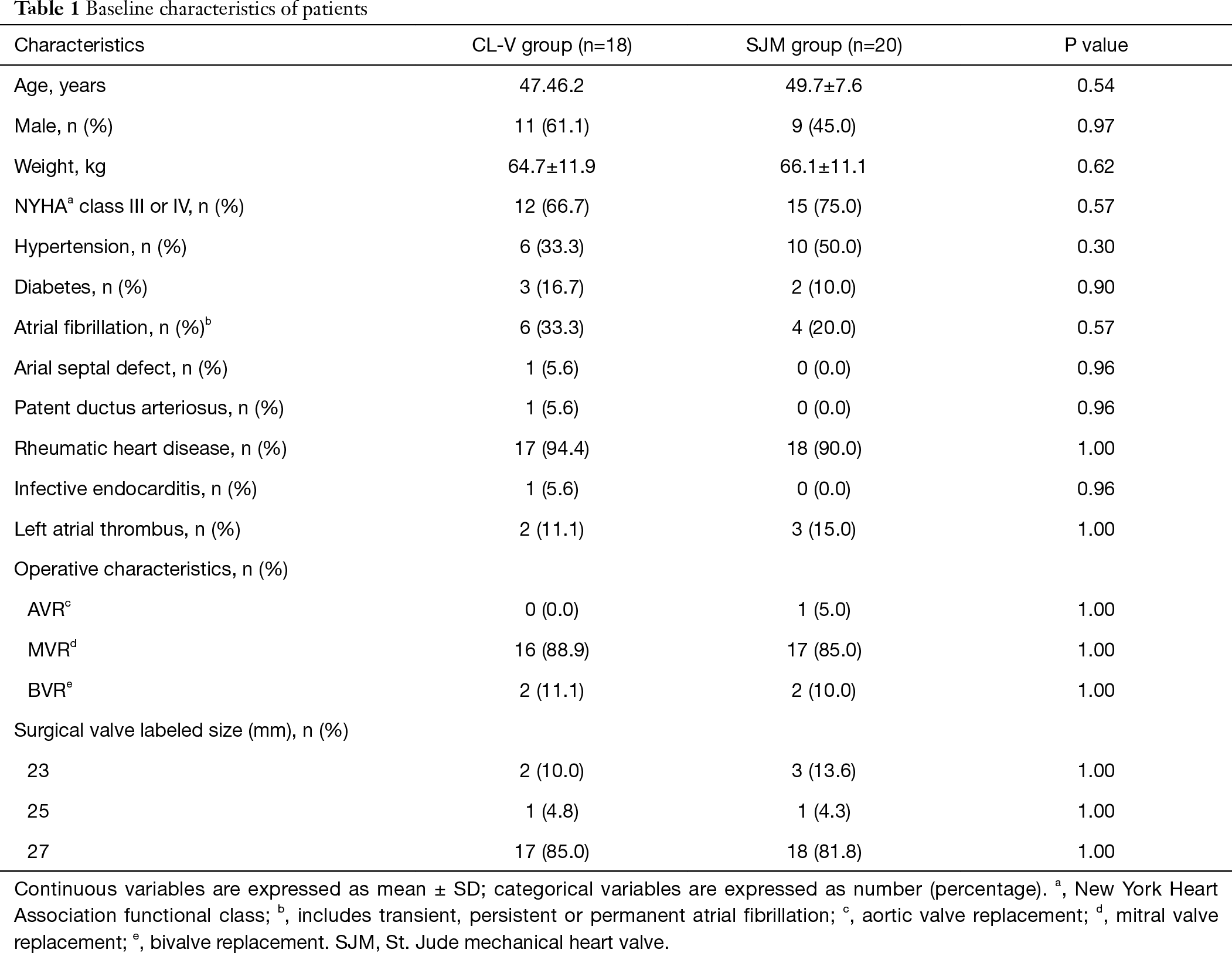 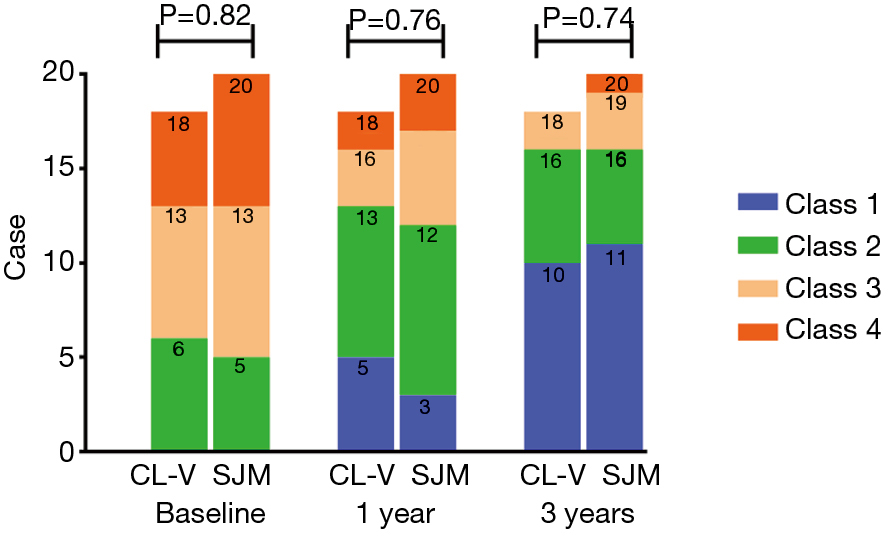 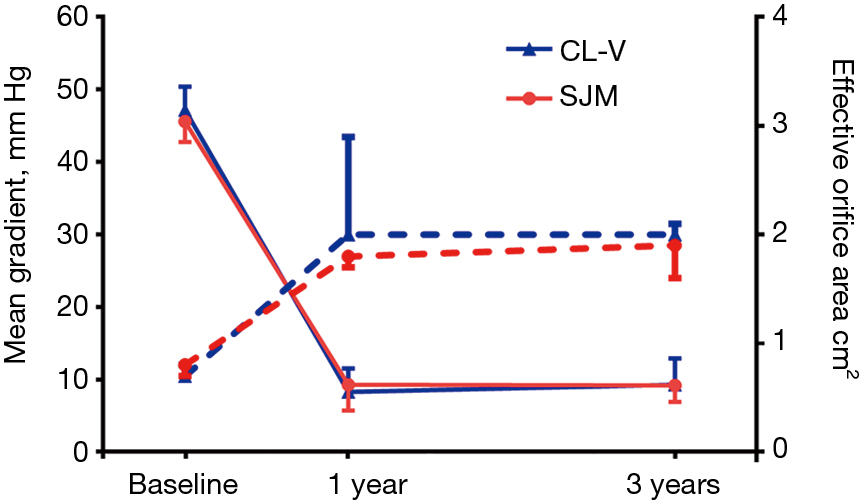 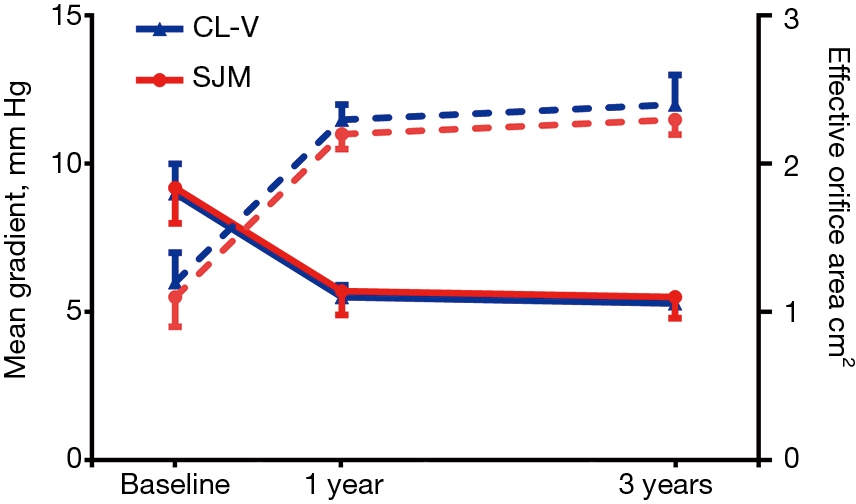 An ideal artificial heart valve should have the following characteristics: (I) it should conform to blood hydrodynamic performance; (II) have good blood compatibility with low noise, but no coagulation or hemolysis; (III) durability; (IV) ease of surgical implementation; (V) low cost and high availability. Since its first clinical application in 1977, the St. Jude Medical bileaflet prosthesis has been used worldwide due to its excellent hemodynamic characteristics and durability, and has come to represent the bileaflet prosthesis (10,11). It was reported that the total number of mechanical heart valves decreased in terms of all prosthetic valves used in clinics, from 53% in 1996 to 32% in 2005 (12). The ability to design and develop Chinese-made bileaflet mechanical heart valves is still very poor.

A comparison between the two groups in our study revealed no significant differences in demographic characteristics. The preoperative parameters were comparable for both groups of patients. All patients in both groups were successfully weaned from cardiopulmonary bypass (CPB) with stable respiratory and circulatory systems, and survived the perioperative period. The smooth surface of the CL-V bileaflet and flexible transition between the open and closed positions were observed at follow-up. No significant differences in C/T, LAD, LVDD, LVEF and LVFS values at 1 year and 3 years post-surgery between the two groups were observed. The patients were able engage in manual labor at varying degrees, and achieved a good quality of life at follow-up. As the pressure difference across the valve can accurately reflect hemodynamic performance (13), our results demonstrated that the hemodynamic performance of the two valves was similar. No statistically significant differences in the mean transvalvular pressure gradient and effective orifice between the Chinese-made CL-V bileaflet mechanical heart valve and the St. Jude Medical heart valve were found. Furthermore, they are also similar to heart valves made in other countries (14,15).

According to comparisons between the two groups, the mid-term follow-up results of the CL-V bileaflet mechanical heart valve were similar to those of the St. Jude Medical heart valve, which demonstrated good mid-term clinical outcomes, stable hemodynamics and good blood compatibility. At recent follow-up, the cardiac function of the patients improved and there were no reports of valve-related complications, including valvular structural damage, paravalvular leakage, prosthetic valve endocarditis and thromboembolism, postoperative anticoagulation-related complications, and hemolytic anemia. Due to a limited number of cases in this study, further studies should be conducted using larger sample sizes of patients with the CL-V bileaflet mechanical heart valve, including its long-term outcomes.

The main limitation of this study was that it was a retrospective, single center study with a small sample size. We handle with the limitation through rigorously screened and excluded patients based on inclusion and exclusion criteria.There was also a lack of postoperative complications to evaluate the safety of the CL-V bileaflet mechanical heart valve. Moreover, the endpoints lacked an assessment of postoperative complications. Further studies with a larger sample size, a longer follow-up or a randomized prospective controlled trial are needed to evaluate the Chinese-made CL-V bileaflet mechanical heart valve.

We thank all the authors for their wonderful collaboration.

Reporting Checklist: The authors have completed the STROBE reporting checklist. Available at http://dx.doi.org/10.21037/jtd-20-2644

Conflicts of Interest: All authors have completed the ICMJE uniform disclosure form (available at http://dx.doi.org/10.21037/jtd-20-2644). The authors have no conflicts of interest to declare.

Ethical Statement: The authors are accountable for all aspects of the work in ensuring that questions related to the accuracy or integrity of any part of the work are appropriately investigated and resolved. The study was approved by the ethics committee of the First Hospital of Lanzhou University (LDYYLL2019-230), and the study was registered with the Chinese Clinical Trial Registry, registration number ChiCTR2000034158. Informed consent was obtained from all individual participants included in the study. All procedures performed in this study involving human participants were in accordance with the Declaration of Helsinki (as revised in 2013).