Cardiac surgery with cardiopulmonary bypass (CPB) remains the standard treatment for most valvular heart disease, severe coronary heart disease and severe congenital heart disease. Although the procedure of CPB has been greatly improved, the incidence of complications and mortality of cardiac surgery is still significantly higher than that of non-cardiac surgery (1-3). The inflammatory reaction had been considered as a leading cause of the adverse postoperative outcomes after cardiac surgery (4,5).

Neutrophil-lymphocyte ratio (NLR), an inexpensive and readily available biomarker originated from routine blood examination, has been reported as a useful marker of system inflammation in sepsis, tumor, cardiovascular disease and non-cardiac surgery (6-9). The NLR has also been considered as a prognostic marker of atrial fibrillation, acute kidney injury (AKI), low output syndrome, prolonged mechanical ventilation among cardiac surgery (10-12). However, there was only a few studies about the association between postoperative NLR and outcomes of cardiac surgery, which was still debatable due to favourable and unfavourable results (13-16). The purpose of this study was to evaluate the relationship between NLR and postoperative outcomes in cardiac surgery patients from Medical Information Mart for Intensive Care (MIMIC) database. We present the following article in accordance with the STROBE reporting checklist (available at http://dx.doi.org/10.21037/jtd-20-2593).

All data of this retrospective cohort study were extracted from MIMIC-III version 1.4 (MIMIC-III v1.4) database. The MIMIC-III, a large critical care database for publicly and freely use, contains health data for more than 60,000 critical care patients stay at Beth Israel Deaconess Medical Center (BIDMC) (Boston, USA) from 2001 to 2012. The study was conducted in accordance with the Declaration of Helsinki (as revised in 2013). In order to gain access to the database, the National Institutes of Health’s web-based course “Protecting Human Research Participants” have been completed. This project was both approved by BIDMC and the Institutional Review Boards of Massachusetts Institute of Technology (MIT) (Record ID 37938207) and individual consent for this retrospective analysis was waived.

Patients with cardiac surgery were selected. The exclusion criteria were that: missing the neutrophil or lymphocyte count data within the first 24 h of ICU admission, age <18 years old, data missing >5%. The primary outcomes were all-cause 30-day, 90-day and 1-year mortality post-cardiac surgery. Other outcomes were collected, including CRRT rate, length of ICU stays, length of hospital stays and the duration of ventilatory support.

A total of 2,707 cardiac surgery patients were selected in this study. The procedure of data selection and criteria of data exclusion is presented in Figure 1. The AUC of ROC curves of NLR and 1-year postoperative mortality was 0.687 (P<0.001) (Figure 2). The NLR value with the highest Youden Index in this study cohort was 7.28 (https://cdn.amegroups.cn/static/public/JTD-20-2593-1.docx), which was considered as the cut-off value of NLR. According to the cut-off value, all patients were divided into two groups, including high NLR group (NLR ≥7.28, N=974) and low NLR group (NLR <7.28, N=1,733). 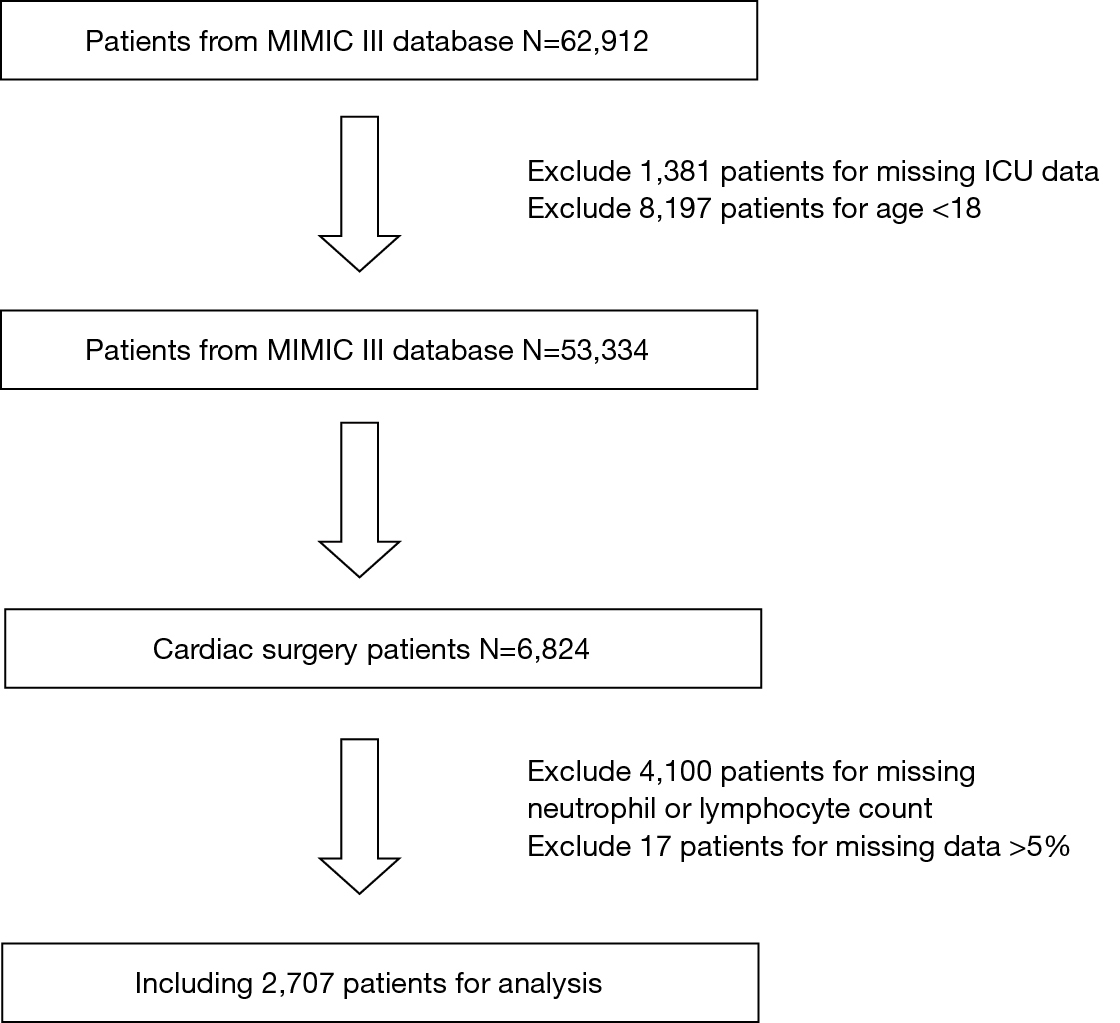 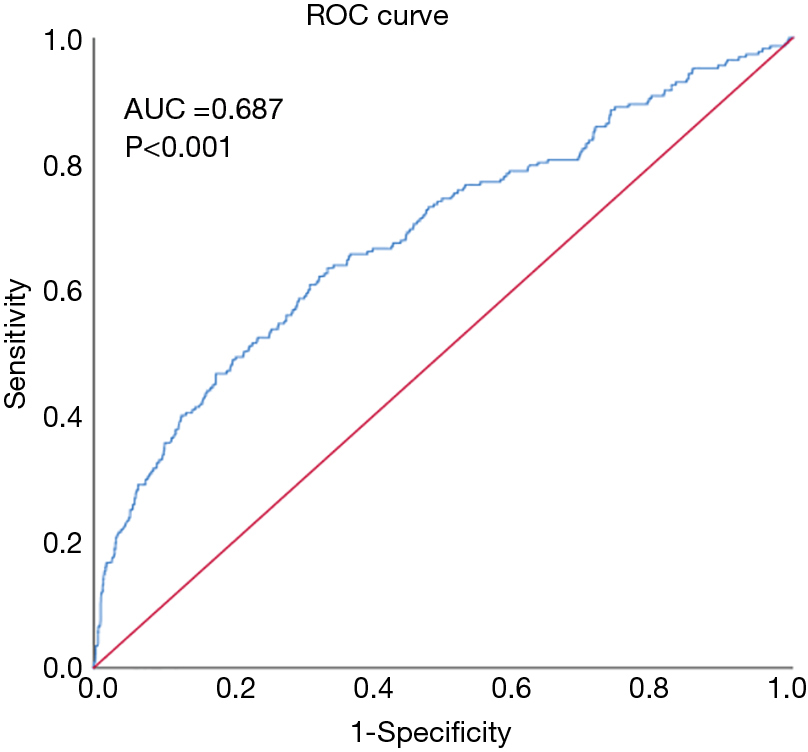 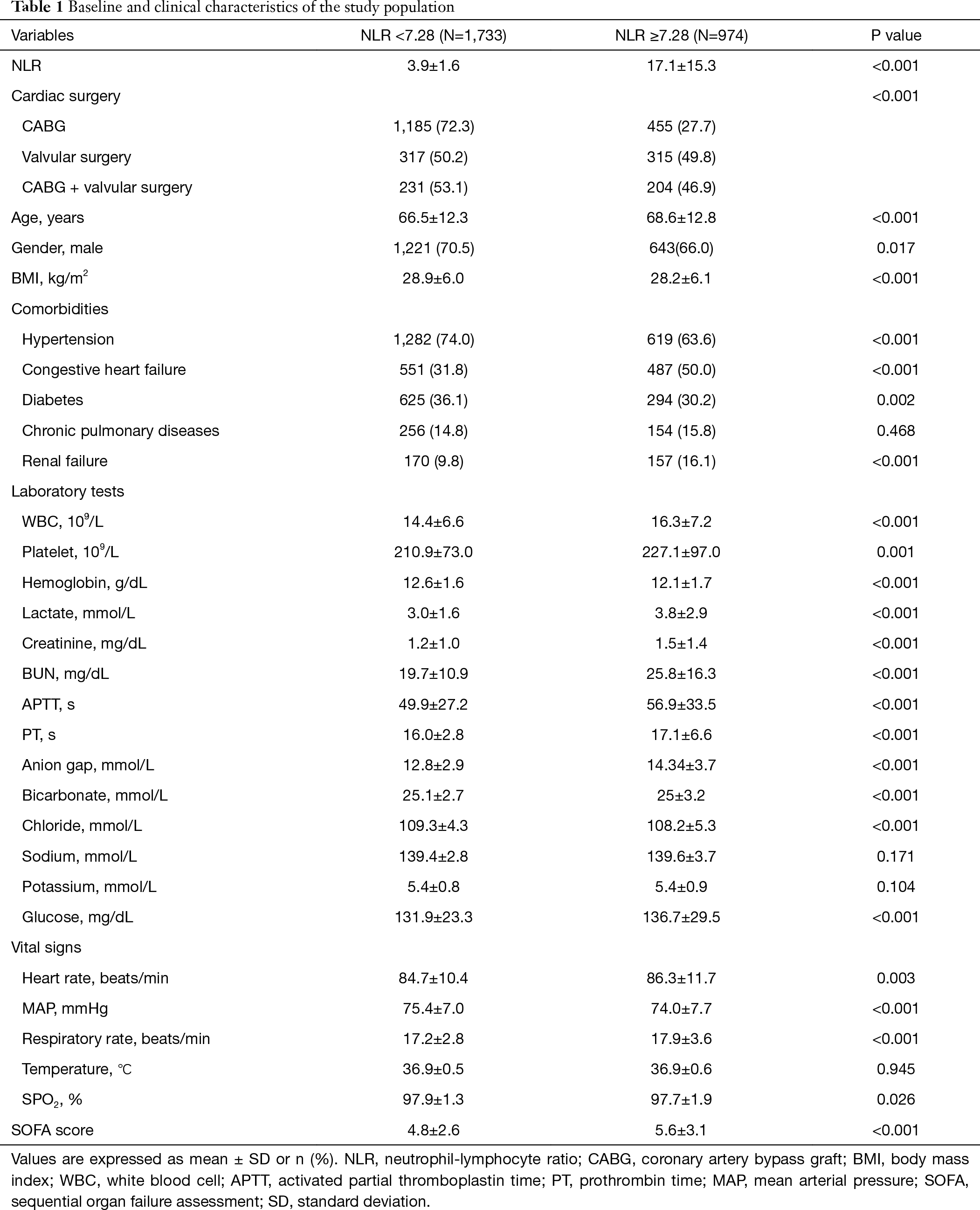 Association between NLR and postoperative mortality and other outcomes

Inflammation plays an important part in the pathogenesis of complications related to cardiac surgery. NLR, a readily available and effective biomarker originated from routine blood examination, is an integrated biomarker of inflammation (6,7). NLR have emerged as a potential biomarker for predictor lethal outcomes and adverse events of patients with cardiac surgery.

In this large retrospective study, we investigated the relationship between NLR and short-term (30 days), medium-term (90 days) and long-term (1 year) mortality of cardiac surgery. The principle finding of the study was that the POD-1 NLR with the cut-off value of 7.28 was an independent predictor for short-term and long-term death, high risk of CRRT rate, longer ICU and hospital stay, prolonged ventilation in patients undergoing cardiac surgery.

The result of our study consistent with the current research for the association between NLR and mortality and complications post-cardiac surgery. A study by Kim et al. in 2015 assessed 600 adult patients underwent CPB surgery in their institution. They found that immediately elevated postoperative NLR with the cut-off value 10 was associated with development of AKI, prolonged hospital stays, and increased in-hospital death and 1-year death in the multivariate logistic regression analysis (17). A study of 906 cardiac surgery patients by Weedle et al. in 2019 investigated the association between postoperative complications and preoperative, POD-1 and POD-2 NLR, which found that elevated postoperative NLR was associated with postoperative atrial fibrillation and AKI (18). According to a large retrospective study by Silberman et al. including 3,027 cardiac surgery patients, preoperative NLR >2.6 was an independent predictor of operative mortality and late mortality, pleural effusion, low output syndrome, and prolonged ventilation among post-cardiac surgery (10). Recent literature of Gurbuz et al. reported the 7.8-year follow-up results. In this 751-CABG-patient study, the elevated NLR with the cut-off value of 4.32 was associated with long-term adverse cardiac events (19).

NLR reflects the relationship between neutrophil and lymphocyte of WBC count and considered as a valuable indicator of system inflammatory response. It has been well documented that the cardiac surgery with CPB was closely related with system inflammatory response. System inflammatory response plays an important role in multiple organ dysfunction syndrome (MODS) and immune system suppression post-cardiac surgery (4,20). Previous report has reported that the incidence rate of MODS post-cardiac surgery with CPB was 11% and the death rate of these patients was about 41% which was significantly higher than non-MODS patients (21). In our study, patients with elevated NLR had higher SOFA scores (4.8±2.6 vs. 5.6±3.1, P<0.001) and higher lactate level (3.0±1.6 vs. 3.8±2.9 mmol/L, P<0.001), which indicated that higher NLR reflect more serious organ dysfunction. The lung was the most vulnerable organ in the process of inflammatory reaction of CPB. The incidence of lung injury, including impaired oxygenation index, reduced lung compliance, increased ventilation/perfusion mismatch, was up to 12% after CPB (22). The results of present study had shown that the ventilation time was significantly increased in high NLR group (24.9±65.3 vs. 121.9±258.3 h, P<0.001), and NLR ≥7.28 increased the risk of ventilation time ≥48 h by 4.16 folds (P<0.001). This results manifest elevated NLR was related to sever lung damage and prolonged ventilation support. Kidney was another vulnerable organ during CPB procedure, the postoperative acute kidney injure rate was up to 55% and might cause 60% mortality among cardiac surgery patients (23). Previous studies have confirmed that the inflammation play a critical role in the development of AKI after cardiac surgery (24,25). The creatinine and BUN level, and CRRT rate were significantly increased in the elevated NLR patients of our study, NLR >7.28 increased the risk of CRRT by 3 folds (P=0.004). The system inflammatory reaction also contributes to other poor outcomes after cardiac surgery including cardiovascular complications, dysfunction of neural system, postoperative infection, coagulation disorder and death (26,27). The NLR was a valuable predictor that associate systemic inflammation and postoperative complications of cardiac surgery according to previous and present studies.

In current, risk stratification in cardiac surgery is dependent on clinical assessment or predictive models rather than common biomarkers. The NLR is an inexpensive and easily acquired parameter generated from blood routine, so NLR can be widely used as an effective clinical biomarker to enhance patient risk stratification after cardiac surgery. This prognostic utility of NLR is independent of other well-recognized individual risk factors and the EuroSCORE.

There are several limitations in this study. First, this is a single center retrospective study based on MIMIC-III database, so selection bias is unavoidable existed. Secondly, some important clinical information may influence the final results, such as preoperative left ventricular ejection fraction, duration of CPB, and infection were missing. Thirdly, our study only evaluated the relationship between NLR and poor prognosis of cardiac surgery, but was not look into the possible mechanisms of the association. Further study should be performed to explain the immunological and pathophysiological mechanism of the association between NLR, systemic inflammation and clinical complications in cardiac surgery. Finally, we only investigated POD-1 NLR in this study, without evaluating the dynamic evolution of NLR during the whole perioperative period, which could helpful to get a comprehensive result. A further investigation is necessary to explore the relationship between the dynamic changes of NLR and mortality and morbidity of cardiac surgery in the future.

The results of this large retrospective study based on MIMIC-III database showed that elevated postoperative NLR with a cut-off value of 7.28 was an independent predictor for mortality and adverse events in patients undergoing cardiac surgery. The data of our study enhanced the evidence that NLR could be considered as a useful cardiac surgery risk stratification biomarker n the future.

Reporting Checklist: The authors have completed the STROBE reporting checklist. Available at http://dx.doi.org/10.21037/jtd-20-2593

Conflicts of Interest: All authors have completed the ICMJE uniform disclosure form (available at http://dx.doi.org/10.21037/jtd-20-2593). The authors have no conflicts of interest to declare.

Ethical Statement: The authors are accountable for all aspects of the work in ensuring that questions related to the accuracy or integrity of any part of the work are appropriately investigated and resolved. The study was conducted in accordance with the Declaration of Helsinki (as revised in 2013). This project was both approved by BIDMC and the institutional review boards of Massachusetts Institute of Technology (MIT) (Record ID 37938207) and individual consent for this retrospective analysis was waived.