Lung cancer is the most prevalent and deadly cancer worldwide (1). Surgical resection is one of the major treatment strategies of non-small cell lung cancer, especially for early stage diseases (2).

Quality of surgery has gained increasingly concern in recent years and unplanned return to the operation room (UROR) is one of the important indicators of the quality of surgery (3,4). UROR is an adverse event which is often caused by major surgical related complications and which in turn, results in more complications, higher mortality rate, longer hospital stay, higher medical costs as well as patient suffering (5). Thus reduction of the rate of UROR is key for quality improvement of surgery.

Analysis of the etiology of UROR is critical to reduce the UROR rate. According to our knowledge, no study to date has investigated the causes and characteristics of UROR of lung cancer patients. In order to reveal the causes of UROR after lung cancer surgeries and to provide insights for surgeons to prevent this unwanted event, we retrospectively examined all lung cancer patients who had an UROR in one admission over a 5-year period in our center. We present the following article in accordance with the STROBE reporting checklist (available at http://dx.doi.org/10.21037/jtd-20-2651).

This was a single center, retrospective, observational study. The study was conducted in accordance with the Declaration of Helsinki (as revised in 2013). The study was approved by the medical ethics committee of the National Cancer Center, Cancer Hospital, Chinese Academy of Medical Sciences (CHCAMS) (No. 20/192-2388) and individual consent for this retrospective analysis was waived. Review of case notes and operation room (OR) system for lung cancer patients who had received surgery in National Cancer Center, CHCAMS from January 2014 to December 2018 was performed electronically. All patients who had received UROR in one admission with the primary surgery were included in the study.

Apart from the demographic, pathological, and surgical data of index surgeries, the detailed data of the unplanned reoperation of the patients was also collected by examining the medical records, pathological exams and surgical records. The tumor, node, metastasis (TNM) stage of the patients was defined according to the American Joint Committee on Cancer staging manual (8th edition). Data for the reoperation included: the cause of UROR, the time between the index surgery and UROR, procedure performed in UROR and patients’ recovery after UROR. In order to avoid potential bias, data collection was performed by two surgeons (JL & JZ) independently. Disparities were discussed among group members till consensus was reached.

Demographic, clinical, and pathological features of the patients

The average age of the patients was 59.5±9.6 (range, 30–77) years and the majority of them were male and smokers (Table 1). Comorbidities were observed in 19 (29.7%) patients and hypertension was most frequent seen followed by diabetes mellitus (Table S1). Two patients had received thoracic surgeries previously. One had thoracotomy right upper lobectomy for lung cancer 8 years before and received thoracotomy wedge resection of a nodule on his right lower lobe this time. The other one had Sweet esophagectomy 4 years before and underwent thoracotomy anatomical sublobectomy of left upper lobe this time. Three patients were given two or three periods of neoadjuvant chemotherapy. Histologic subtypes included adenocarcinoma in 37, squamous cell carcinoma in 22, large cell carcinoma in two and metastatic tumors in three (Table 1). The mean diameter of the tumors was 2.8±1.9 (range, 0.5–9) cm and pathological TNM stage of the patients is also shown in Table 1. 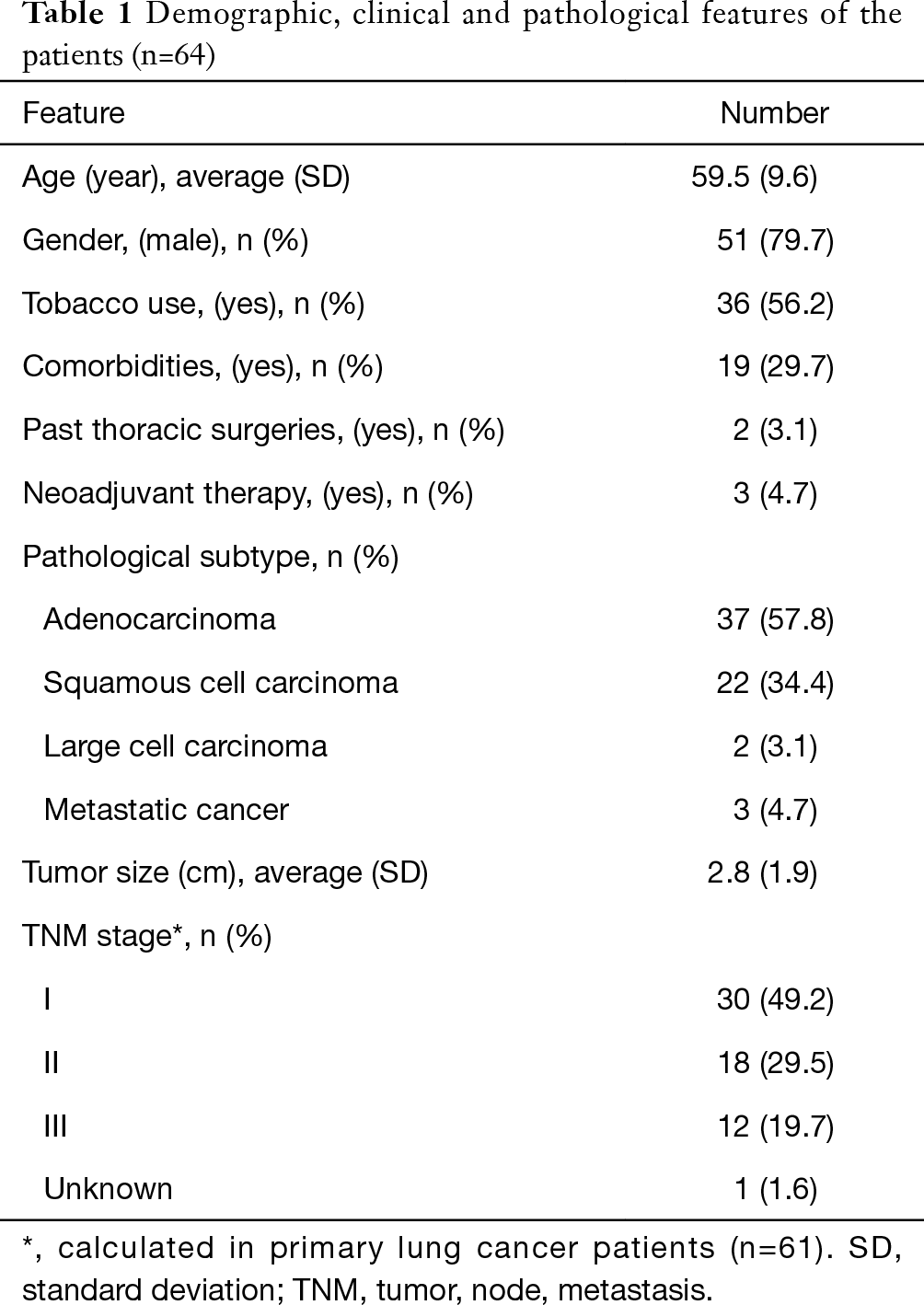 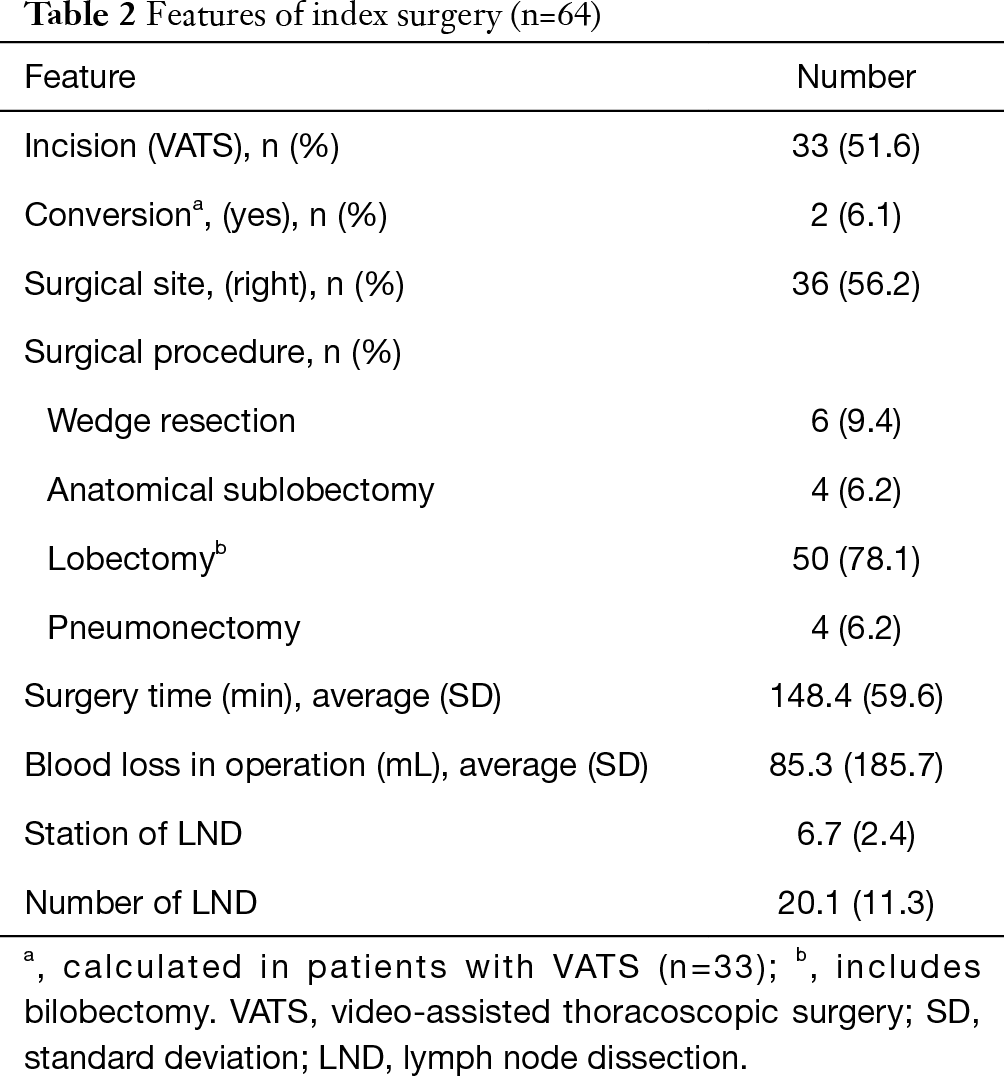 Next, the detailed data of UROR for all the patients was evaluated. The most common cause for UROR was bleeding, which accounts for over 80% of the cases. Other indications included chylothorax, chest cavity infection, persistent air leak, esophageal perforation, and lower extremity artery thrombus (Table 3). Follow-up for short-term results were done till 60 days after discharge. After UROR, 13 (20.3%) patients stayed in intensive care unit (ICU) and the average length of hospital stay after UROR was 10.5±10.7 (range, 4–82) days. Over 90% (60/64) of the patients recovered properly and were discharged within 30 days after UROR (Table 3). Two patients were transferred to community medical centers for recovery. One patient was readmitted on the 26th day after discharge for recurrent chest cavity infection. There was one case that underwent reoperation after UROR and died in hospital 27 days after, resulting in a perioperative death rate of 1.6% (Table 3). This was significantly higher than the non UROR patients, which was 0.11% (P<0.001). The surgical procedures of UROR for different causes were presented in Table 4. 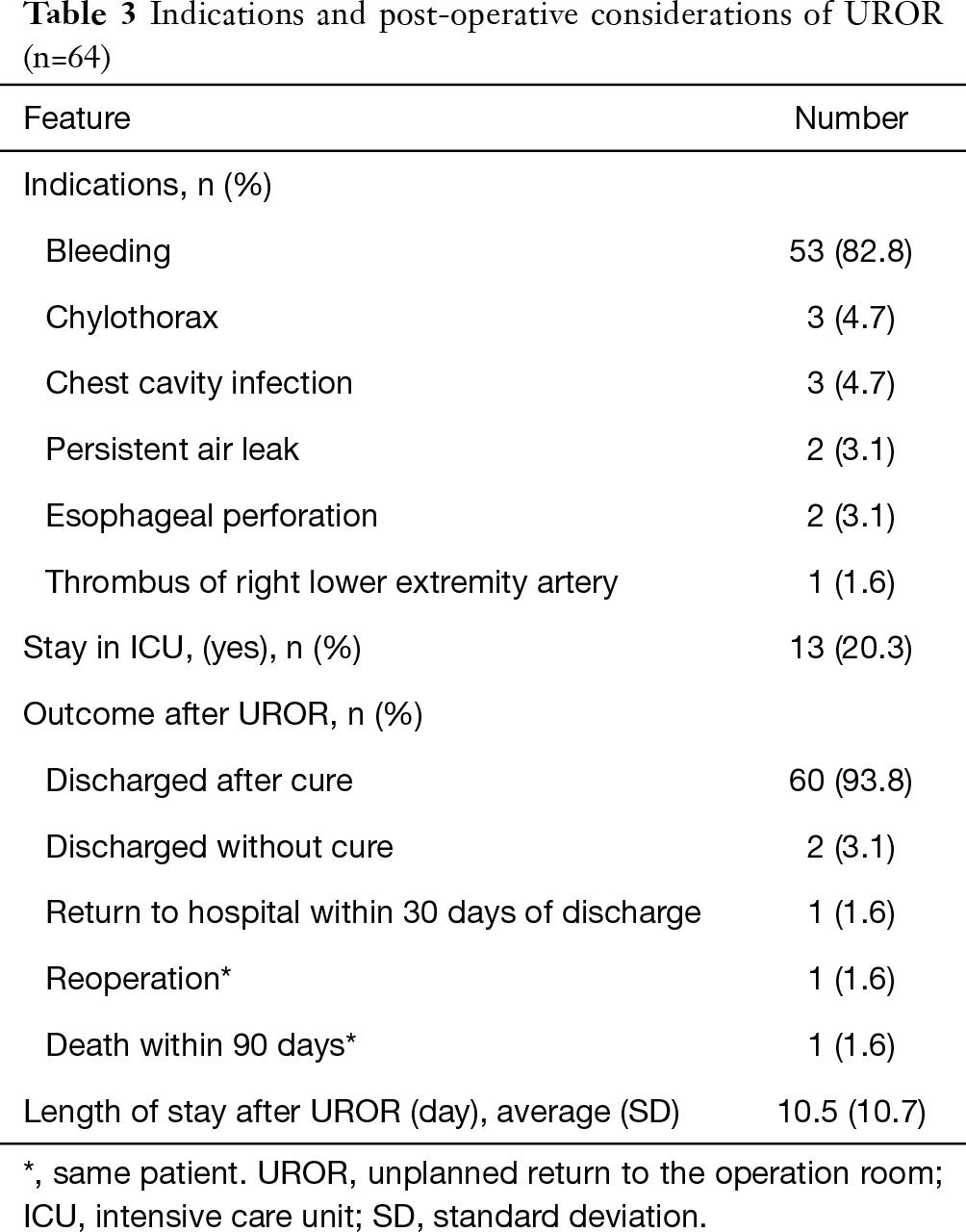 Features of UROR caused by bleeding

In order for better understanding of the most common cause of UROR for lung cancer surgery, we further examined the surgically related characteristics of the 53 UROR cases that were caused by bleeding. The median time interval between the index surgeries was 7.8 hours with a median drainage volume of 1,050.0 mL at the time of UROR. A median blood loss of 2,100 mL was observed and the patients needed a median 1,200 mL of blood transfusion (Table 5). As to the bleeding sites that caused the UROR, over half (27/53, 50.9%) of the bleeding occurred in surgical sites in thoracic cavity, among which raw surface of mediastinal lymph node dissection (LND) was most common. Other sites included pulmonary resection margin, inferior pulmonary ligament, parietal pleura, pulmonary vessels, and bronchial artery at bronchus stumps. Two patients that underwent wedge resection at the index surgery were found to have congestion on the resected lobe during UROR and received lobectomy of the affected lobe. Bleeding was discovered on the incision in 11.3% of the cases and in over one-third of the patients, no bleeding site was found even after careful and thorough inspection. After UROR, around one-fifth of the patients needed to stay in ICU and the median length of hospital stay was 7 days (Table 5). 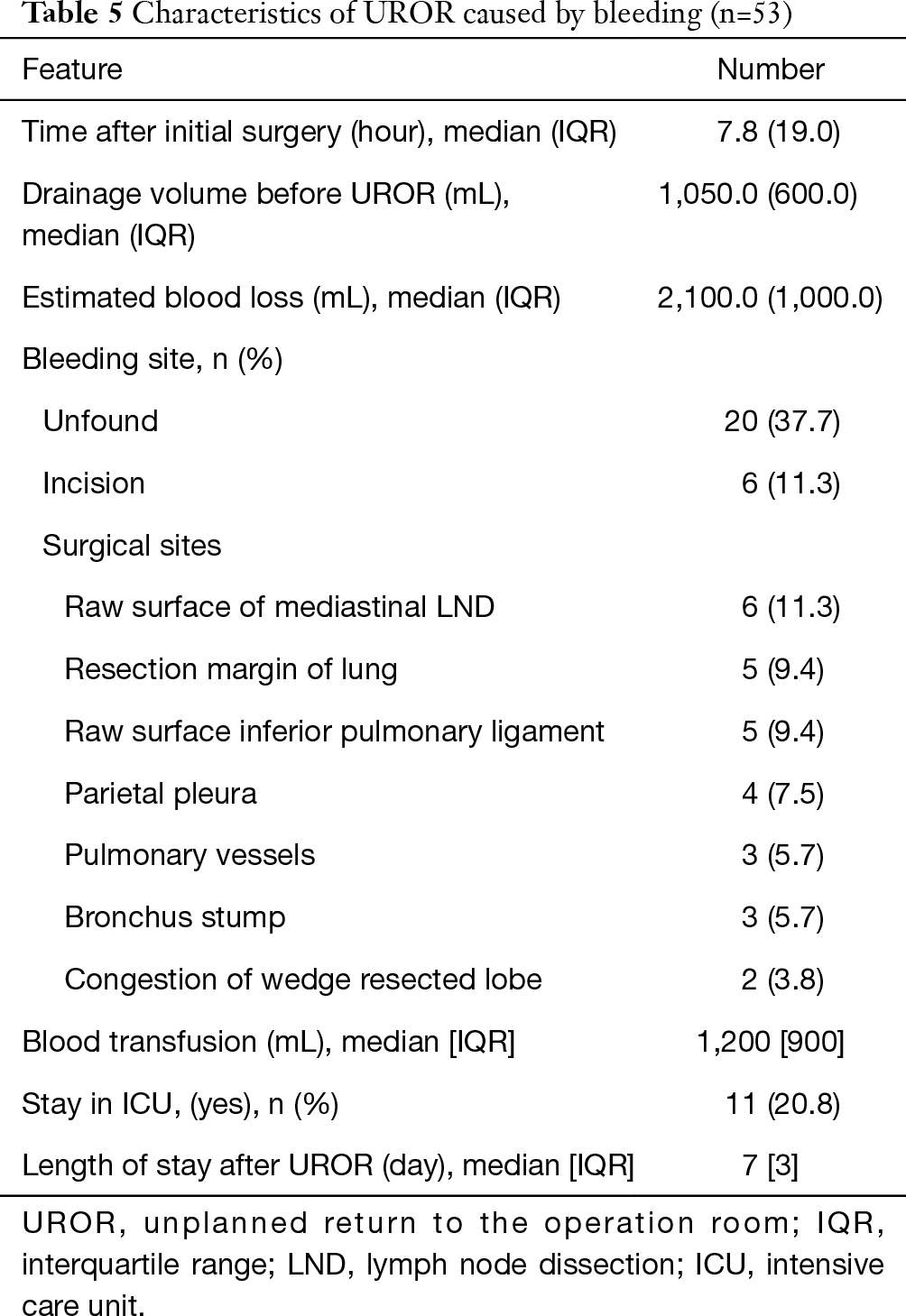 In the current study, we analyzed the characteristics of 64 lung cancer patients who had undergone UROR in a 5-year period. Our results showed that bleeding was the most common course of UROR for lung cancer surgery, responsible for 82.8% of the cases. About half of the bleeding happened in surgical sites, 11.3% were in incisions, and 37.7% were not found. Over 90% of the patients recovered properly with the median length of stay after UROR being 7 days.

UROR has been a critical criteria to measure the quality of surgeries and summary and examinations of features of UROR could provide fundamental insights to improve the level of surgical treatment (5,6). According to our knowledge, this is the first study evaluating the clinical characteristics, causes, and in-operation findings of UROR for lung cancer patients.

Post-operative bleeding is an urgent and life-threatening complication that often needs emergent surgical treatment. It is also one of the major indications that causes UROR in different surgeries (7,8). Our study showed that bleeding accounted for over 80% of the UROR for lung cancer surgeries. Understanding of the causes for UROR is fundamental for the reduction of this unwanted complication. Thus our findings are important for they give thoracic surgeons a reminder that careful examination for potential bleeding sites at the end of surgeries could reduce the risk of UROR in a great measure.

Our study also revealed that nearly half of the bleeding (26/53, 49.0%) did not happen in the in-thoracic surgical sites. As to the 20 (37.7%) cases with unidentified bleeding site, it is suspected that some of them might have bleeding in incisions, because when we take the same incisions in UROR as the initial procedure, bleeding on the incisions become hard to be discovered (9). These results indicate that incisions should also be checked with equal care as the surgical sites before finishing surgeries.

We have observed a substantial variation of blood loss for the patients during the index surgery (5–1,200 mL). This is owing to two cases of high-volume blood loss (900 and 1,200 mL, respectively). One patient had hemorrhage due to anatomical variation of pulmonary artery while the other due to intensive adhesion. The other 62 patients had intraoperative blood loss less than or equal to 200 mL.

The current study only analyzed the characteristics of lung cancer patients who have suffered UROR. Thus our manuscript has limitations in that the risk factors associated with UROR were not assessed. Also, our results still need verification by multi-central studies.

Although our manuscript is a single center, retrospective study, yet the 64 patients was based on a large cohort of 23,345 lung cancer patients over a 5-year period. Plus, the National Cancer Center, CHCAMS in which the study was conducted, is a national wide, large volume center in China. The patients are from different areas all around China (10). Thus the results of our study have robust representativeness.

In conclusion, our study has revealed that post-operative bleeding is the most common cause of UROR for lung cancer surgeries, followed by chylothorax and chest cavity infection. About half of the bleeding occurred in surgical sites with the other half in incisions or unknown origin. The risk factors of UROR for lung cancer surgeries needs further studies.

Funding: This work was supported by the Beijing Hope Run Foundation (LC2017B24), Fundamental Research Funds for the Central Universities (2017PT32001), and the CAMS Innovation Fund for Medical Sciences (2017-I2M-1-005).

Conflicts of Interest: All authors have completed the ICMJE uniform disclosure form (available at http://dx.doi.org/10.21037/jtd-20-2651). The authors have no conflicts of interest to declare.

Ethical Statement: The authors are accountable for all aspects of the work in ensuring that questions related to the accuracy or integrity of any part of the work are appropriately investigated and resolved. The study was conducted in accordance with the Declaration of Helsinki (as revised in 2013). The study was approved by the medical ethics committee of the National Cancer Center, Cancer Hospital, Chinese Academy of Medical Sciences (CHCAMS) (No. 20/192-2388) and individual consent for this retrospective analysis was waived.