Central airway obstruction (CAO) (1) is defined as a reduced lumen located in the trachea, carina, main bronchi or right bronchus intermedius. It can be caused by a variety of malignant and benign disease, with the former as the most common one (2). Primary pulmonary malignancy, adjacent organ malignancies such as esophageal cancer, thyroid cancer, lymphoma and distant metastatic malignancies, all can cause central airway stenosis through direct intraluminal tumor growth or external compression the airways. Malignant central airway obstruction (MCAO) can lead to airflow limitation, atelectasis, obstructive pneumonia and hemoptysis. Due to the severity of illness, some inoperable MCAO require airway intervention such as laser, electrocautery, balloon dilatation, cryotherapy and with or without stent placement before or during anti-tumor therapy (3). Because of the rapid and long-lasting effect of alleviating airway obstruction, stenting is often the preferred choice for patients with inoperable life-threatening MCAO, especially for the type of extrinsic airway compression (4).

So far, there have been many studies on the effectiveness and complications of airway stenting, but few had focused on factors that affect survival after stenting (5,6). Nagano et al. reported that a good performance status was the only positive factor associated with survival after airway stenting, but this study only analyzed 21 patients (7). At present, what should be done for the MCAO patients following stent placement remains ambiguous? Are there any other factors can affect the survival? Therefore, we aimed to assess the factors associated with the survival in a Chinese population with MCAO after stent placement.

All patients who underwent stent placement because of MCAO from February 2003 to June 2017 in the First Affiliated Hospital of Soochow University (a 2,500-bed, a general hospital in Suzhou, China) were included in this study. Clinical data and follow-up information were obtained from medical records or through telephone interviews with the patients’ families. Criteria used to recruit the patients to this study included: (I) CAO were identified by bronchoscope or chest computed tomography (CT) with cross-sectional area of lumen with decrease of more than 50%, or with obvious dyspnea symptoms; (II) airway stenosis was caused by malignant tumor; and (III) the patients received airway stent placement. Exclusion criteria were: (I) stent was placed because of esophagotracheal fistula but not MCAO; (II) clinical data was incomplete (Figure 1). 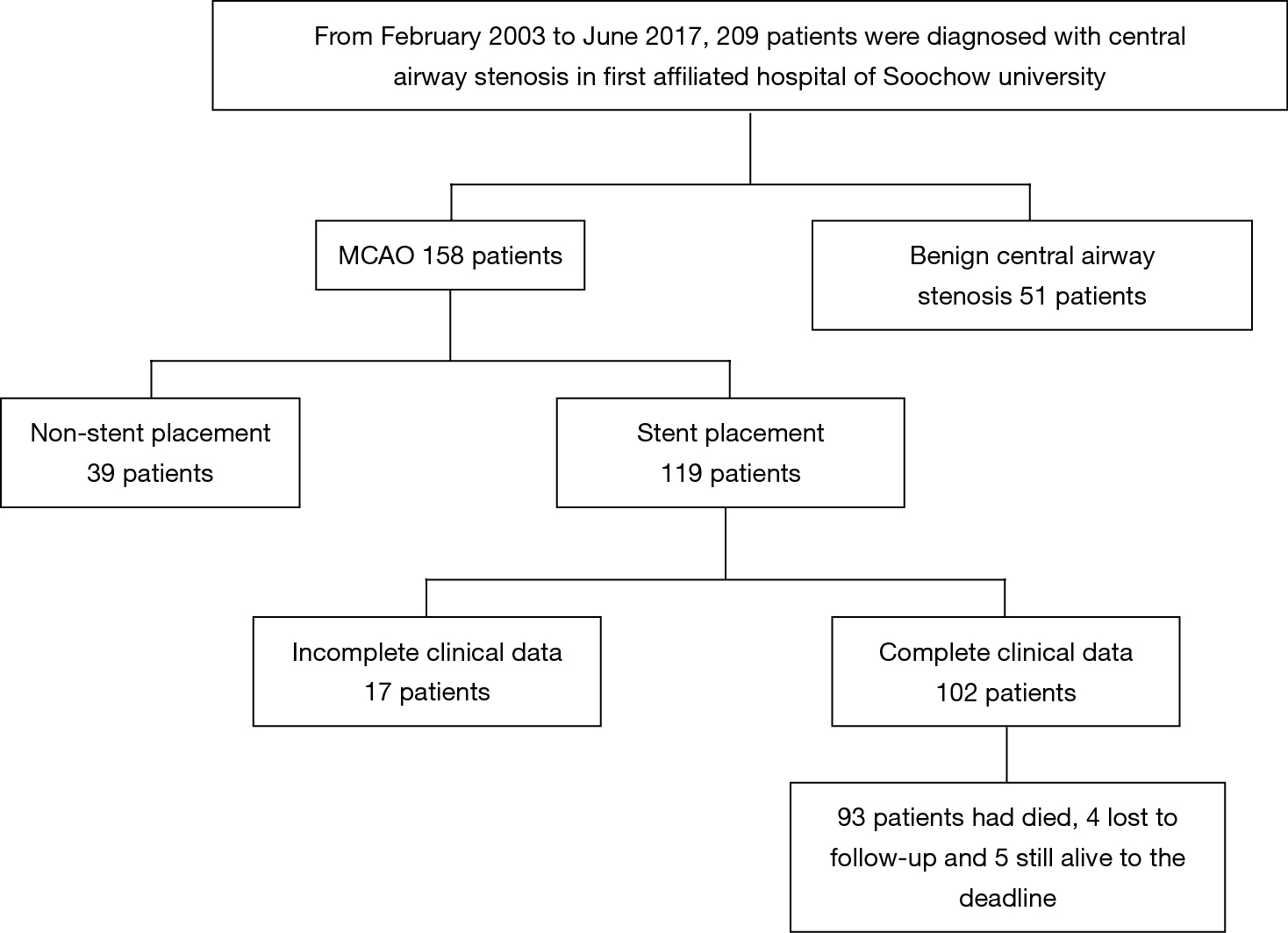 Figure 1 Flow chart of the recruitment of those patients in the study.

The study was conducted in accordance with the Declaration of Helsinki (as revised in 2013). This study was approved by the ethics committee of the First Affiliated Hospital of Soochow University (2019-009). The informed consensus from each patient or the individual patient’s family was waived because there were no new interventions for the patients and the information was anonymized.

Prior to the stenting, all patients underwent chest CT with or without a flexible bronchoscope exam to assess the severity of CAO.

After local or general anesthesia, the stent (straight, L or Y-shaped metallic airway stent) was guided by flexible bronchoscope or through endotracheal intubation under X-ray. If airway was significantly obstructed, airway intervention such as balloon dilatation would be performed before stenting. Due to the limitations of technology and materials, we did not carry out silicone stent placement. Instead, we used metallic airway stent mainly manufactured by Micro-Tech (Nanjing) Co., Ltd.

Routine bronchoscopy would be performed one week after stenting to check the status of the stent and tenacious secretions. Subsequent bronchoscopy was determined by the attending physician if necessary. After the initial stenting, bronchoscopic interventions to maintain airway patency including argon plasma coagulation (APC), laser, stent replacement, cryotherapy, etc. would be performed if recurrence of CAO caused by tumor, granulation tissue formation or tenacious secretions.

Continuous variables were expressed as mean ± SD and categorical variables were expressed as frequency (%). Survival length was calculated from the time of the stent insertion to the time of death or last follow-up if the patients were still alive (June 2017, last follow up). The overall survival rate was presented by the Kaplan-Meier curve. The Log-rank test was used to compare survival rates of subgroups of each potential prognostic factor. Then factors with P value of less than 0.05 based on Log-rank analyses or may affect prognosis were analyzed by multivariate Cox hazards regression model using forward stepwise regression based on maximum likelihood estimation. Hazard ratio (HR) and 95% confidence interval (CI) were calculated for potential predictors. All of the P values were two-tailed, and a significance level of 0.05 was used. Statistical analysis was conducted using SPSS statistical software (SPSS, version 22.0, Chicago, IL, USA). 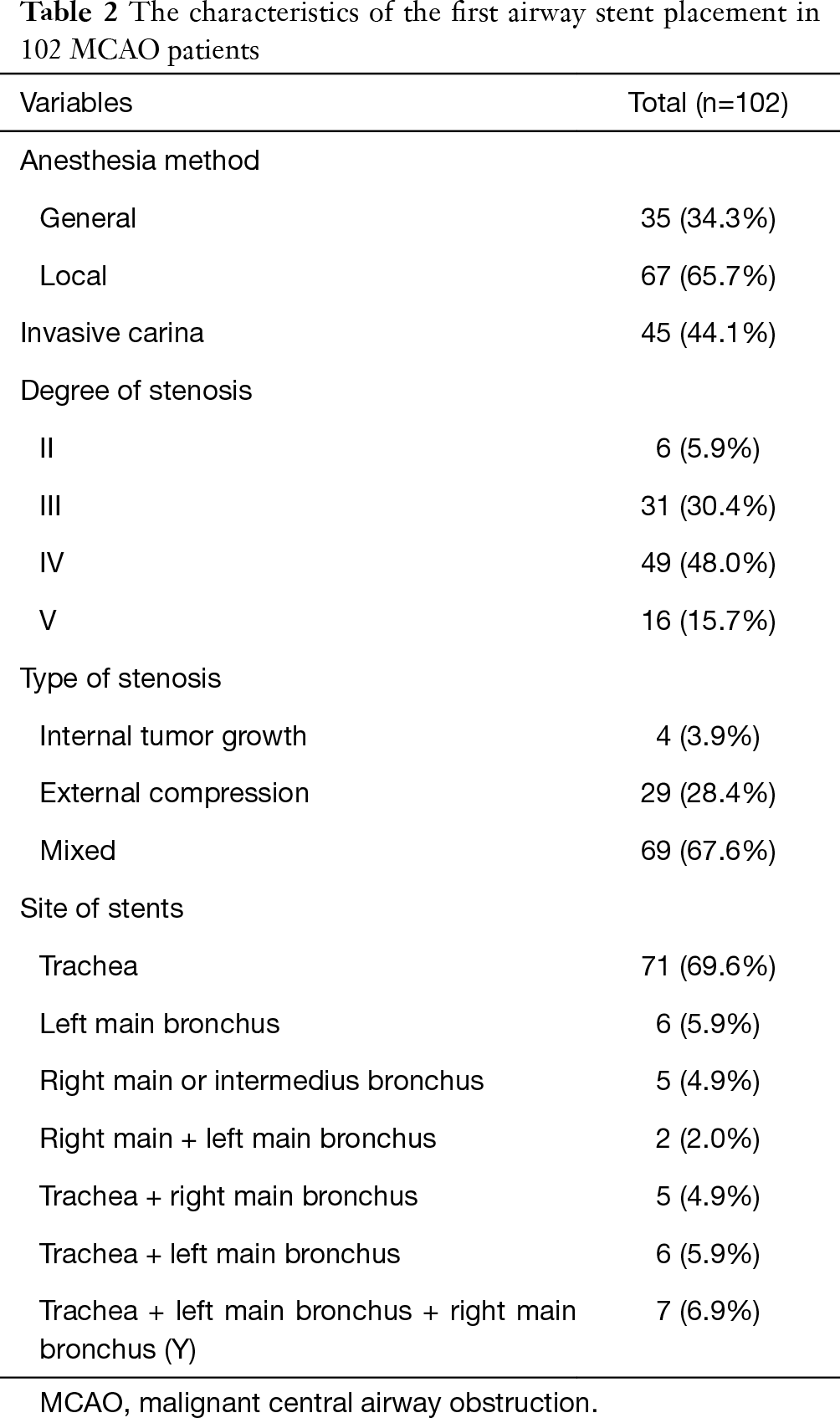 Univariate analysis of 20 potential prognostic factors in the 102 cases showed that pathological staging, history of chemotherapy or radiotherapy prior to the stenting procedure, ECOG PS score prior to the stenting procedure, NRL, carinal involvement, site of stent placement and post-procedural treatments were associated with the survival in MCAO patients (P<0.05). While, factors such as tumor differentiation, degree and type of stenosis were not associated with the prognosis (Table 3). The survival curves using Kaplan-Meier estimates were showed in Figure 2. 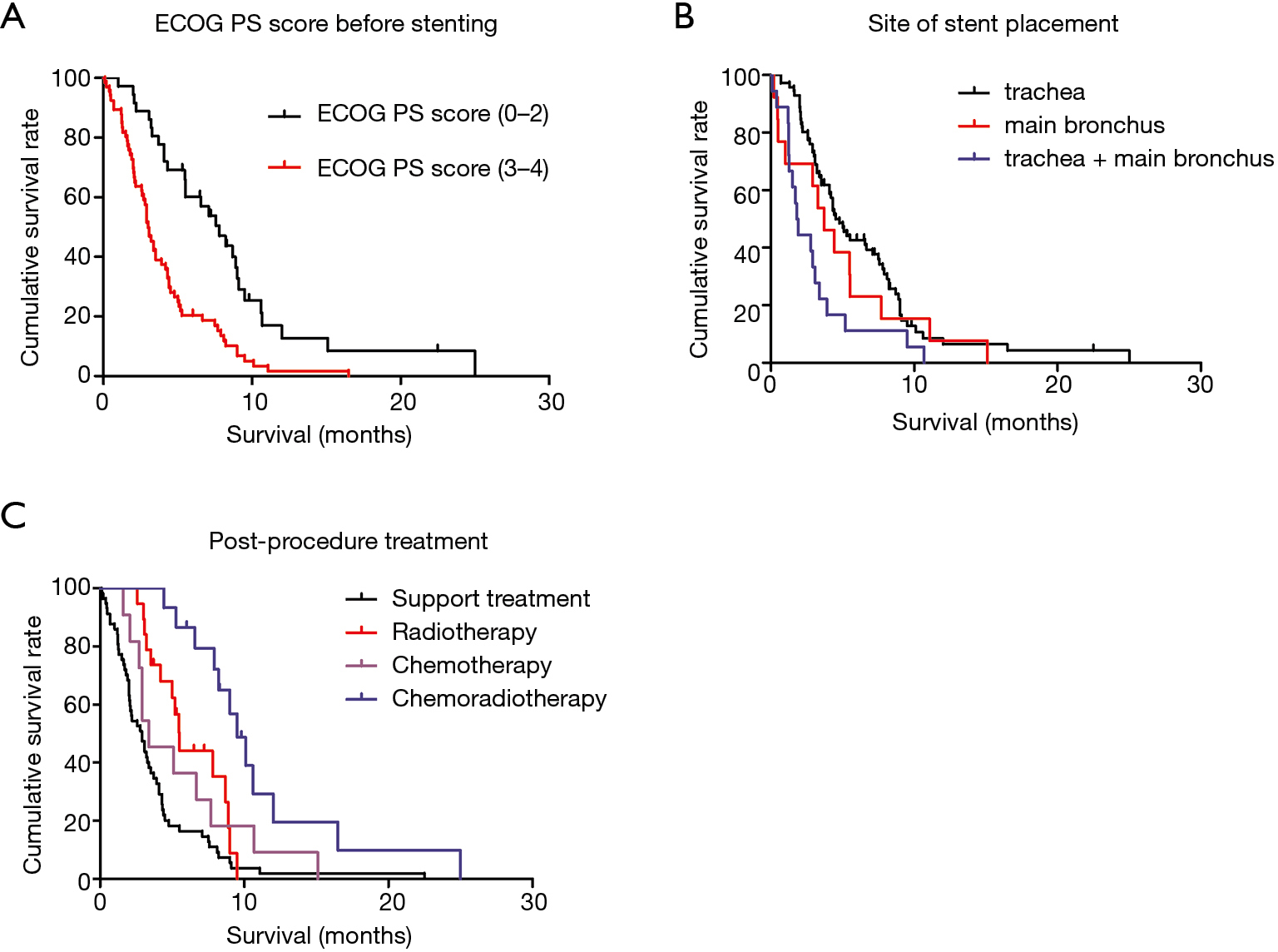 MCAO are associated with poor survival and the median survival of those untreated patients was only 1–2 months (10). With the development of bronchoscopic interventions technique, the CAO can be alleviated by these approaches, thus these patients have opportunity to receive further anti-tumor treatment to prolong their life (11,12). In our study, the median survival of MCAO patients after stenting was 4.1 months, similar to reported by Guibert et al. (4.7 months) (5) and Tanigawa et al. (3.6 months) (13).

Interventional bronchoscopy is considered as one of the positive prognostic factors in patients with MCAO (14). In addition, it has been reported that etiology, ASA score, obstruction site, extrinsic or mixed lesion, preoperative adjuvant therapy, preoperative ECOG PS score and postoperative treatment were independent prognosis-related factors in MACO patients receiving interventional bronchoscopy (5,6,15-17). Compared to the above studies, our study focused on the MCAO patients treated with stenting, which excluding the influence of other interventions. Our study showed that ECOG PS score before stenting, site of stent placement and post-procedural treatments were the independent prognostic factors for the patients with MCAO after airway stenting.

ECOG PS score is an indication that helps determine whether a cancer patient should receive chemotherapy and is also a prognostic factor of cancer patients (18,19). Similar to reported by Razi et al. (20), our study showed that patients with high PS score [3–4] had a worse prognosis than those with low PS score [0–2] (median survival 3.0 vs. 7.8 months, P=0.001). Indeed, symptoms of dyspnea or hypoxia could be partially alleviated after stenting, but whether the tumor could be controlled or not depends on subsequent anti-tumor treatment. Patients with high PS score may have fewer chances to receive the following anti-tumor treatment, which may lead to worse prognosis.

Song et al. showed that anti-tumor treatment prolonged the survival of the patients with MCAO after receiving bronchoscopic intervention (P<0.001) (6) and Jeon et al. reported the same conclusion (P<0.001) (21). But none of them indicated the effect of different anti-tumor therapies on prognosis of these MCAO patients after bronchoscopic intervention. Our data extended these information and showed the median survival of the group receiving radiotherapy and chemoradiotherapy treatment after stenting was 5.5 and 9.5 months, respectively, which were more than 2.9 months of supportive treatment group (P<0.05, P<0.001; respectively). But no difference was found between the chemotherapy group after stenting and the supportive treatment group (P>0.05). This could be partly explained by most of cases were at the end-stage and nearly one-half of patients had received chemotherapy before stenting. As a means of local treatment, radiotherapy is more effective than chemotherapy in controlling local airway stenosis. Our data shows that patients with MCAO who receive radiotherapy or radiochemotherapy after stenting have a longer survival time, which suggests that radiotherapy as a local treatment to maintain airway patency is more important for those patients, especially at the end-stage or previously received chemotherapy.

It had been previously reported that the type of primary tumor was one of the prognostic factors in patients with MCAO after bronchoscopic intervention (14). However, in our study, we didn’t find the difference of survival between different tumor types after airway stenting. This may be caused by different patients participating in the study.

The study also has some limitations, including: (I) it was a single-center, retrospective study; (II) different tumors responded differently to radiotherapy and chemotherapy. Moreover, isotope iodine 131 treatment is not equivalent to radiotherapy (Isotope iodine 131 treatment is accepted as a special kind of radiotherapy in this study). Therefore, different patients enrolled in the study may affect the outcome; (III) none of the patients received targeted therapy or immunotherapy, which limited analysis of the impact of these new treatment on the survival; (IV) due to the limitations of technology, we did not carry out silicone stent airway implantation in the past time, thus we couldn’t analyze the effects of different kinds of stents on survival.

This study shows that the median survival of MCAO patients was 4.1 months after airway metallic stenting. Survival of MCAO patients after airway stenting was related to ECOG PS score prior to the stenting and the site of stent placement, and we have hereby proposed for the first time that having opportunity to receive radiotherapy or chemoradiotherapy after stenting contribute to better prognosis.

We would like to be grateful to Prof. Hao-Dong Xu (Department of Pathology, University of Washington Medical Center, Seattle, WA 98195, USA) for critical reading of this manuscript.

Conflicts of Interest: All authors have completed the ICMJE uniform disclosure form (available at http://dx.doi.org/10.21037/jtd-20-1520). The authors have no conflicts of interest to declare.

Ethical Statement: The authors are accountable for all aspects of the work in ensuring that questions related to the accuracy or integrity of any part of the work are appropriately investigated and resolved. The study was conducted in accordance with the Declaration of Helsinki (as revised in 2013). This study was approved by the ethics committee of the First Affiliated Hospital of Soochow University (2019-009). The informed consensus from each patient or the individual patient’s family was waived because there were no new interventions for the patients and the information was anonymized.