Immunoglobulin E (IgE) plays a central role in pathophysiological mechanisms of allergic reactions and bronchial airway inflammation (1-3). Based on this data, a recombinant humanized monoclonal anti-IgE antibody, omalizumab, was approved for the treatment of insufficiently controlled moderate-to-severe persistent IgE-mediated allergic asthma (4). Omalizumab targets the Fc region of free serum IgE, forms immune complexes, and reduces the serum level of free IgE (4). It also blocks allergic responses via the downregulation of the high affinity IgE receptor FcɛRI, which is present on inflammatory and structural cells, and by the inhibition of mast cell activation and the release of inflammatory factors by basophils (5-7). Omalizumab has been shown to reduce asthma-induced symptoms and exacerbations, and emergency department visits and hospitalizations (8-10). However, the Global Initiative for Asthma guidelines indicate that its cost is high, and that patient responses vary widely (4).

Recently, baseline serum CXCL10 and interleukin (IL)-12 levels have been shown that they may predict severe asthmatics’ responsiveness to omalizumab; unfortunately, levels of these cytokines are low and blood levels cannot be measured reliably (12). Thus, there are no reliable predictors of the response to omalizumab in patients with asthma (12-15).

We present the following article in accordance with the IgE change predicts asthma patients’ response to omalizumab reporting checklist (available at http://dx.doi.org/10.21037/jtd-20-2073).

Twenty-five patients with uncontrolled moderate-to-severe persistent asthma were recruited from March 2018 to December 2019, from the respiratory outpatient clinic at Southern Medical University, Nanfang Hospital (Guangzhou, China) (Figure 1). Moderate-to-severe persistent uncontrolled asthma is characterized by frequent daily symptoms or nocturnal awakenings and exacerbations, despite a minimum of 3-step treatment (4,17). Moderate asthma was defined as under complete control using 3-step treatment. Severe asthma was defined as controlled or uncontrolled even using 4- or 5-step treatment (4,17). The diagnosis of asthma was based on physician observation of reversible airflow obstruction. Reversible airflow obstruction was defined as forced expiratory volume in 1 s (FEV1) increase from baseline ≥12% and FEV1 absolute value increase ≥200 mL after inhalation 400 µg salbutamol. All patients were treated with omalizumab based on national (17) and international guidelines (4). The total serum IgE levels and bodyweight of all patients were within the parameters described in the omalizumab dosing table. 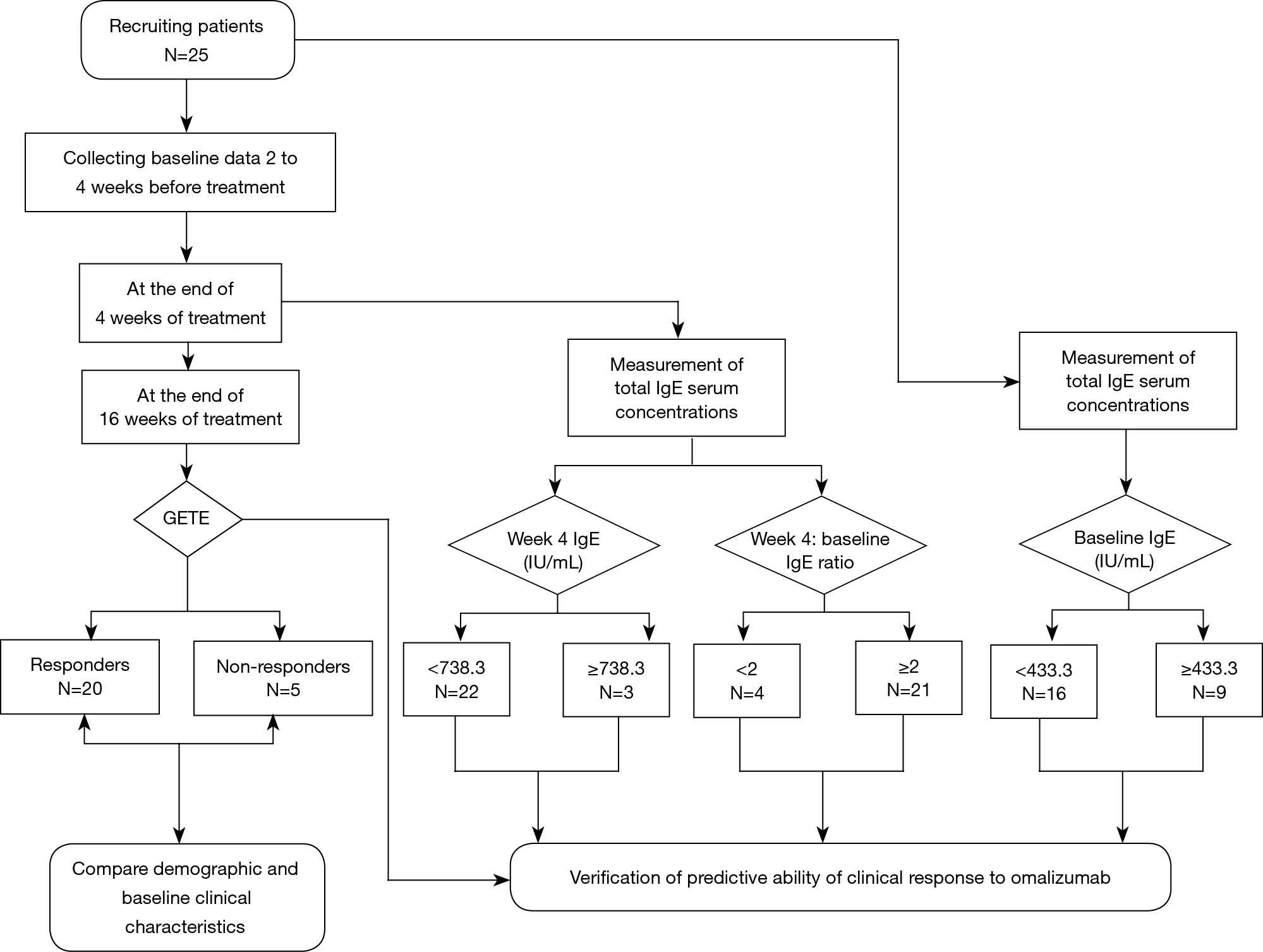 Exclusion criteria were current smoking, serious comorbidities including bronchiectasis, ABPA and lung cancer, respiratory tract infection or acute exacerbation within the past 4 weeks, and the possibility of pregnancy. This study was approved by the Hospital Ethics Committee (code number NFEC-2018-092). All patients provided written informed consent for participation in the study.

Twenty-three patients received monthly subcutaneous injections of omalizumab for a total of 16 weeks; two patients are injected every two weeks; the dosage was derived from the standard omalizumab dosing table. Patients received clinic visits prior to each injection, and at the end of the 16 weeks. Omalizumab effectiveness was evaluated after 16 weeks (4).

Total IgE serum concentrations were measured at baseline and at the end of week 4, prior to the second injection. Levels were measured using an electrochemical luminescence method (Roche, Germany), which is a commonly used method that measures both free and omalizumab-bound IgE. Serum samples were tested within 1 hour after collection. The ratio of week 4 IgE level:baseline IgE level was calculated.

Patients rated as good or excellent by GETE were considered to be responders, and demographic and clinical characteristics were compared between responders and non-responders. The Kolmogorov Smirnov test was used to determine whether continuous variables were normally distributed. Levene’s test was used for the evaluation of homogeneity of variances. Continuous data (e.g., age) were presented as mean ± standard deviation. Non-normally distributed variables (e.g., total IgE) were presented as medians and interquartile ranges (IQR). Categorical data were presented as count and percentage. Continuous data were compared with the 2-sample t-test and categorical data with the Fisher’s exact test; non-normally distributed data were examined with the Mann Whitney U test.

Receiver operating characteristic (ROC) curve analyses were used to determine the predictive value of baseline IgE level, week 4 IgE level, and the week 4:baseline IgE ratio could predict response to omalizumab. The maximized likelihood was used to identify cutoff values, and to calculate the sensitivity and specificity. The area under the ROC curve (AUC) was calculated to evaluate the predictive ability of the variables examined. All analyses were performed using SPSS version 26.0 statistical software. A 2-tailed P value of <0.05 was regarded as statistically significant. Due to lack of distribution data of total serum IgE 4-week-to-baseline ratio levels in asthma patients after omalizumab treatment, power of test rather than intended sample size was calculated using PASS version 11.0 statistical software.

All 25 patients were treated with omalizumab for 16 weeks, and most patients had an effective response to treatment. After 16 weeks of treatment, 4 patients (16%) had an excellent response and 16 (64%) a good response; 5 patients (20%) showed no response. There were no significant differences in demographic and baseline clinical characteristics between responders and non-responders (Table 1). Lung function tended to be improved in responders. Oral corticosteroids could be withdrawn in 4 of the 5 responders who had been on oral corticosteroids before the study. Inhaled corticosteroid (ICS) doses were unchanged in all patients. The baseline ACT and ACQ scores in responders were 17.2±3.8 and 2.2±1.1, respectively. And the baseline ACT and ACQ scores in non-responders was 19.2±4.6 and 1.4±1, respectively. After 16 weeks of treatment, the average increase of ACT score was 3.7 and the average reduction of ACQ score was 1.4 in responders (both, P<0.01). In contrast, there was no clinically relevant improvement in the non-responders (Table 2). 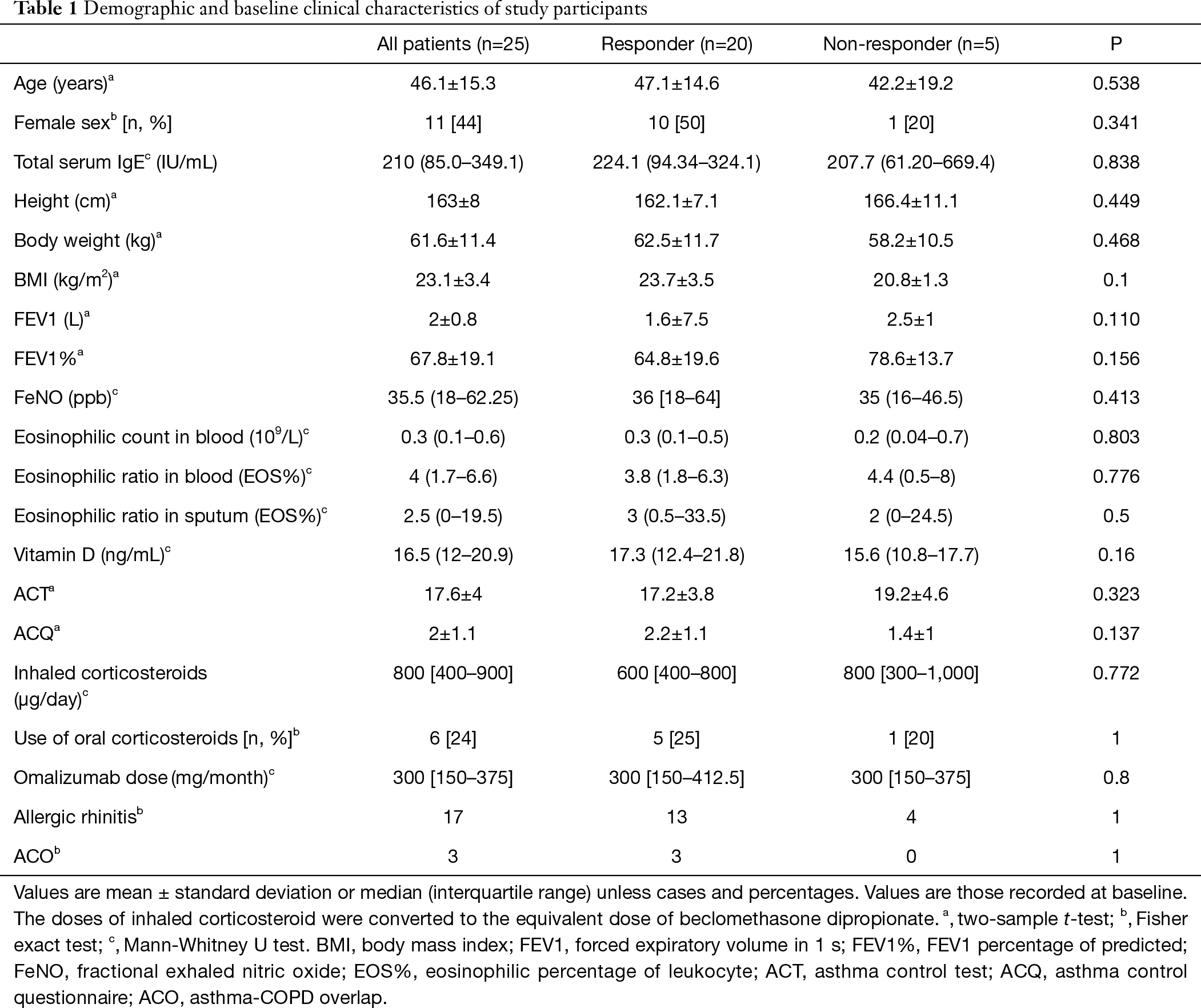 At week 4 after beginning treatment, responders exhibited a significant increase in total IgE levels; whereas there was no change in levels in non-responders (Table 2, Figure 2). 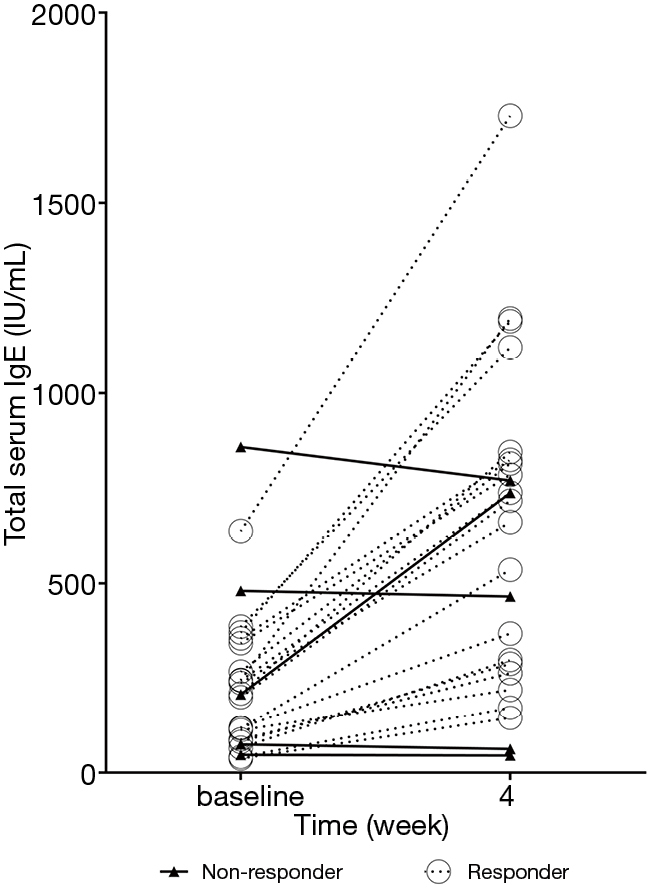 Table 3 Levels of baseline and week 4 IgE, week 4/baseline IgE, and increases in IgE levels in patients who show response or no response at week 16 of omalizumab treatment
Full table 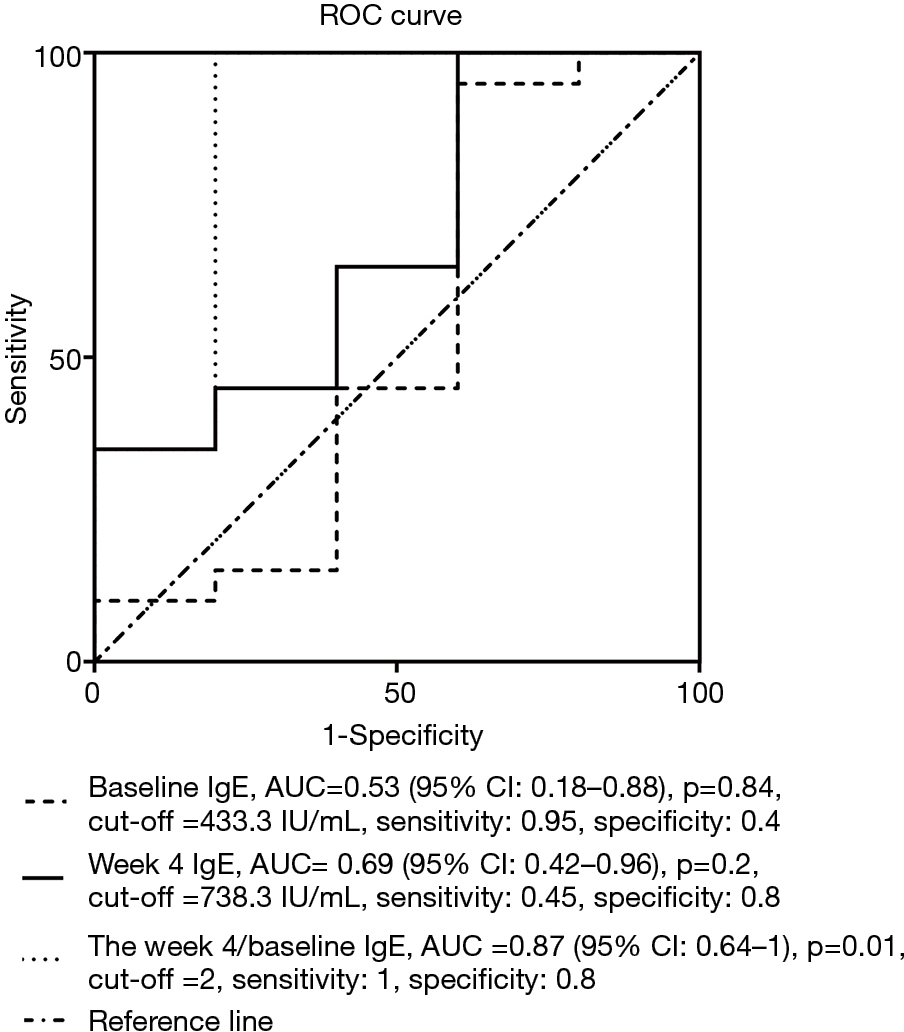 Figure 3 Predictive value of baseline IgE, week 4 immunoglobulin E (IgE), and the week 4:baseline IgE ratio for predicting the response to omalizumab at 16 weeks. The values in brackets are 95% CIs.

There were no differences in baseline FeNO, eosinophilic ratio in induced sputum, eosinophils in blood and blood eosinophil ratio, and serum vitamin D levels between responders and non-responders (Table 1).

To our knowledge, this is the first study that has indicated that a more than 2-fold increase in the week 4 serum IgE:baseline IgE ratio can predict a good/excellent response to omalizumab in patients with moderate-to-severe asthma. Our findings proved once again that omalizumab can improve overall asthma control; at the end of 16 weeks of treatment 80% of patients benefited from omalizumab, which is similar to the results of another real-life study of 158 patients rated by GETE (22). More importantly, our results suggest a method to determine which patients will respond, i.e., the week 4: baseline IgE ratio may be useful for predicting patients who will respond to omalizumab within the first 16 weeks of treatment. Use of the ratio may help in deciding to continue or discontinue treatment.

During the first 4 weeks of treatment, the IgE levels of omalizumab responders increased, while that of non-responders did not change. The underlying mechanisms for these findings are not clear and further research is needed. One of the possible reasons could be that the free IgE of non-responder doesn’t combine with omalizumab. An anti-drug antibody (ADA) response, off-target binding, and glycosylation pattern can inhibit the binding of omalizumab and IgE (23). A lack of complex formation can result in faster clearance of IgE and no increase in levels and a poor therapeutic effect in non-responders. In addition, omalizumab–IgE complexes may not be inactive and can capture allergens, which may improve the therapeutic effects of omalizumab (24).

In this study, we used GETE to measure treatment effectiveness. GETE is widely used for evaluating the response to omalizumab effectiveness (22,27). Most prior reports have evaluated responsiveness to omalizumab by monitoring a decrease of asthma exacerbations or an improvement in asthma quality of life questionnaire (AQLQ) score (15,28).

Our results showed that response to omalizumab cannot be predicted by blood eosinophil count, which is similar to the results of other studies (12,27).

GINA 2020 (4) and some other studies (12,15) have indicated that asthma patients with high FeNO levels are more likely to respond to omalizumab. Other studies, however, have arrived at opposite conclusions (28).

In this study, 3 patients with ACO (asthma-COPD overlap) had good treatment responses; this finding is consistent with that of a recent a large-scale, real-world study that indicated patients with ACO treated with omalizumab had similar clinical outcomes to patients with asthma without ACO in terms of improvements in exacerbation frequency and ACT score (29). Usually, high levels of IgE and FeNO, and a high blood eosinophil count are markers of a better response to omalizumab for ACO patients (30).

Several limitations of this study need to be emphasized. First, the sample size was small; we plan to perform a future investigation with a larger number of patients. Second, we did not examine allergic responses with a specific serum IgE or skin prick test; however, some studies have shown that omalizumab can be effective in non-atopic severe asthma (34,35). Third, it cannot be excluded that the number of responders will increase with an increasing duration of treatment. However, it seems that the effectiveness after 16 weeks is similar to that of an extended course of treatment. A study of 258 patients demonstrated that the GETE at 16 weeks in omalizumab-treated asthma patients is an effective indicator of a persistent response, and could predict treatment response or nonresponse at week 32 in 83.3% of patients (36). Lastly, this study was not blinded and patients were aware of their total IgE levels.

The study showed that a week 4:baseline IgE ratio ≥2 predicts a good response to omalizumab at 16 weeks in patients with moderate-to-severe asthma. Future multi-center trials with a large sample size are required to verify the results.

The authors would like to thank the patients and others who cooperated in performing this study.

Conflicts of Interest: All authors have completed the ICMJE uniform disclosure form (available at http://dx.doi.org/10.21037/jtd-20-2073). The authors have no conflicts of interest to declare.

Ethical Statement: The authors are accountable for all aspects of the work in ensuring that questions related to the accuracy or integrity of any part of the work are appropriately investigated and resolved. The study was conducted in accordance with the Declaration of Helsinki (as revised in 2013). This study was approved by the Ethics Committee of Nanfang Hospital, Southern Medical University (code number NFEC-2018-092). All adult subjects and the parents of children patients have given their written informed consent prior to participation in the study.