The advent of video-assisted thoracoscopic surgery (VATS), a major part of minimally invasive surgery, has significantly altered respiratory surgical procedures (1,2). VATS has been widely used and become the mainstream in the treatment of early-stage lung cancer patients due to its remarkable benefits, such as much smaller incision, reduced pain, and shorter hospital stay, on patients, compared to the traditional thoracotomy (3,4). Based on the most popular conventional VATS (c-VATS) using 3 or 4 ports, more approaches have been developed in the field of thoracic surgery, such as two-ports, single-port, and three-dimension (3D) VATS as well as Davinci Robot, which show the similar or even better surgical outcomes. Since then, lung segmentectomy and surgery for advanced lung cancer have been reported using those approaches (5-7).

Recently, 3D single-port VATS, with some potential advantages such as less trauma and better vision, has been introduced in Shanghai Chest Hospital. However, reports regarding this approach are very limited. In the present study, we introduced our initial experience of using 3D single-port VATS to treat early-stage lung cancer.

We present the following article in accordance with the STROBE reporting checklist (available at http://dx.doi.org/10.21037/jtd-19-3465).

This retrospective study was approved by the Institutional Ethics Committee of Shanghai Chest Hospital [KS (Y) 1803], which was in line with the 1964 Helsinki Declaration (as revised in 2013). The written informed consent was not needed for this research. Patients with clinical stage I lung cancer undergoing surgical resection between September 2016 and October 2017 were included in this retrospective analysis. Those candidates would be excluded if they met the following exclusive criteria, (I) previous cancer diagnosis within 5 years; (II) benign lesions; (III) other cancer metastasis proven by final history; (IV) multiple primary lung cancers proven by final pathology (Figure 1). 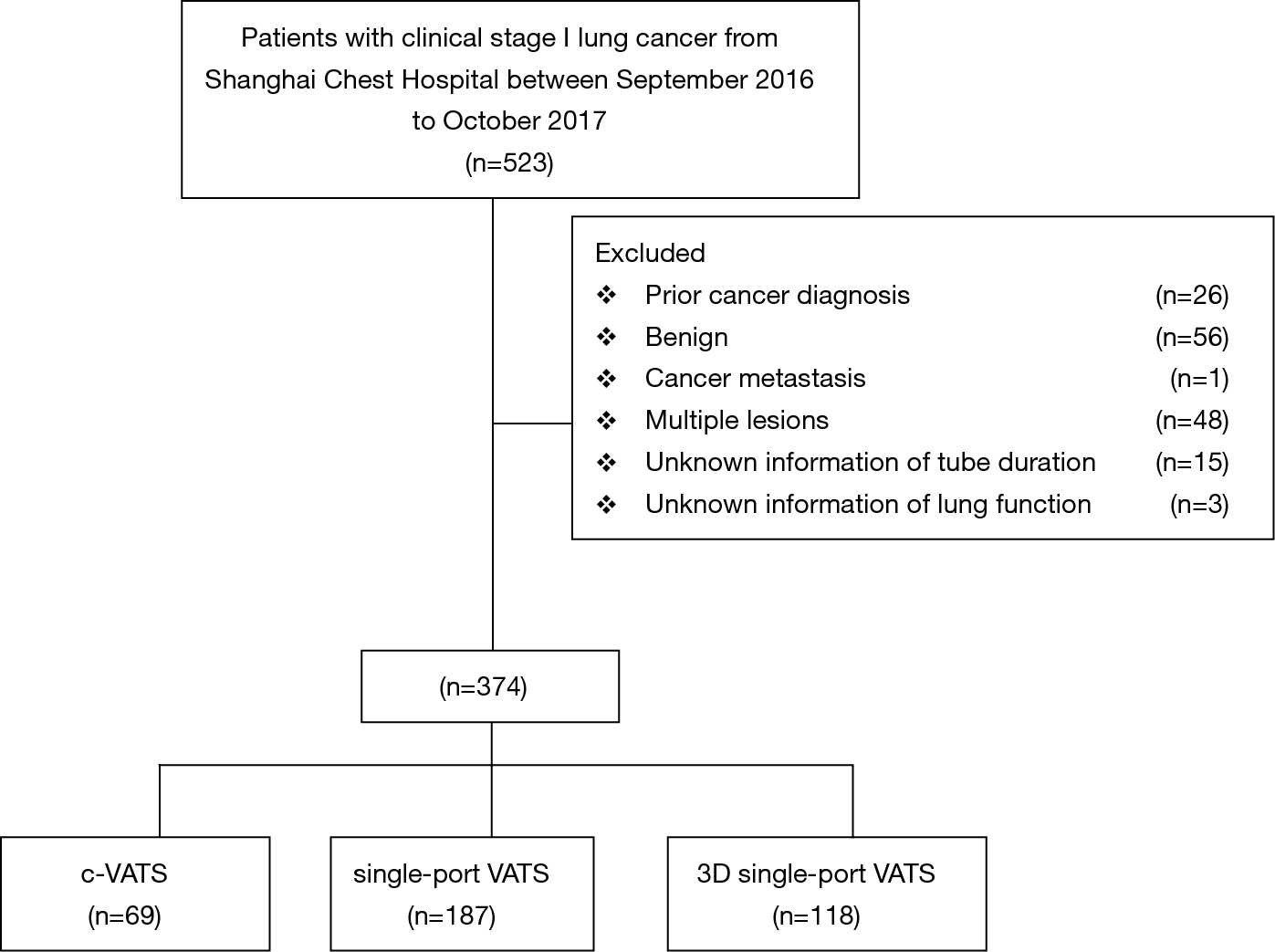 All these patients had the preoperative examination to evaluate the resectability and to exclude distant metastasis, including chest computed tomography (CT) scan, bronchoscopy, abdominal CT or ultrasonography examination, brain magnetic resonance imaging and whole-body bone scan. Mediastinoscopy or endobronchial ultrasound-guided trans-bronchial needle aspiration (EBUS-TBNA) was selectively performed in patients with enlargement of the lymph node, and those with suspected lymph node metastasis indicated by positron emission tomography (PET). Staging was performed according to the 8th TNM classification.

In 3D single-port VATS, an approximately 4-cm incision was made on the anterior (upper and lower lobectomy) or middle (lower lobectomy) axillary line (Figure 2A), followed by the attachment of a Protector. The procedure was a thoracoscope was mostly handled at an angle of more than 45 degrees from the chest wall. Surgery was performed using a 10- or 5-mm 30-degree oblique-viewing thoracoscope and facing/inverted dual-monitors without any specific device. The Wrap Protector mini was used to open incisions, and a small rib Retractor was not used. The energy device, HARMONIC scalpel (Ethicon, USA) was used for mediastinal lymph node dissection. With 3D glasses, stereoscopic perception was given to enhance the feasibility and efficiency of surgical resection (Figure 2B). Data cable and optical fiber cable were in the same direction, presenting like a sector and extremely improving surgical flexibility and convenience and releasing assistant fatigue (Figure 2C). Various surgical factors (operative outcomes), the incidence of complications, postoperative complications, and 30-day mortality were all evaluated. 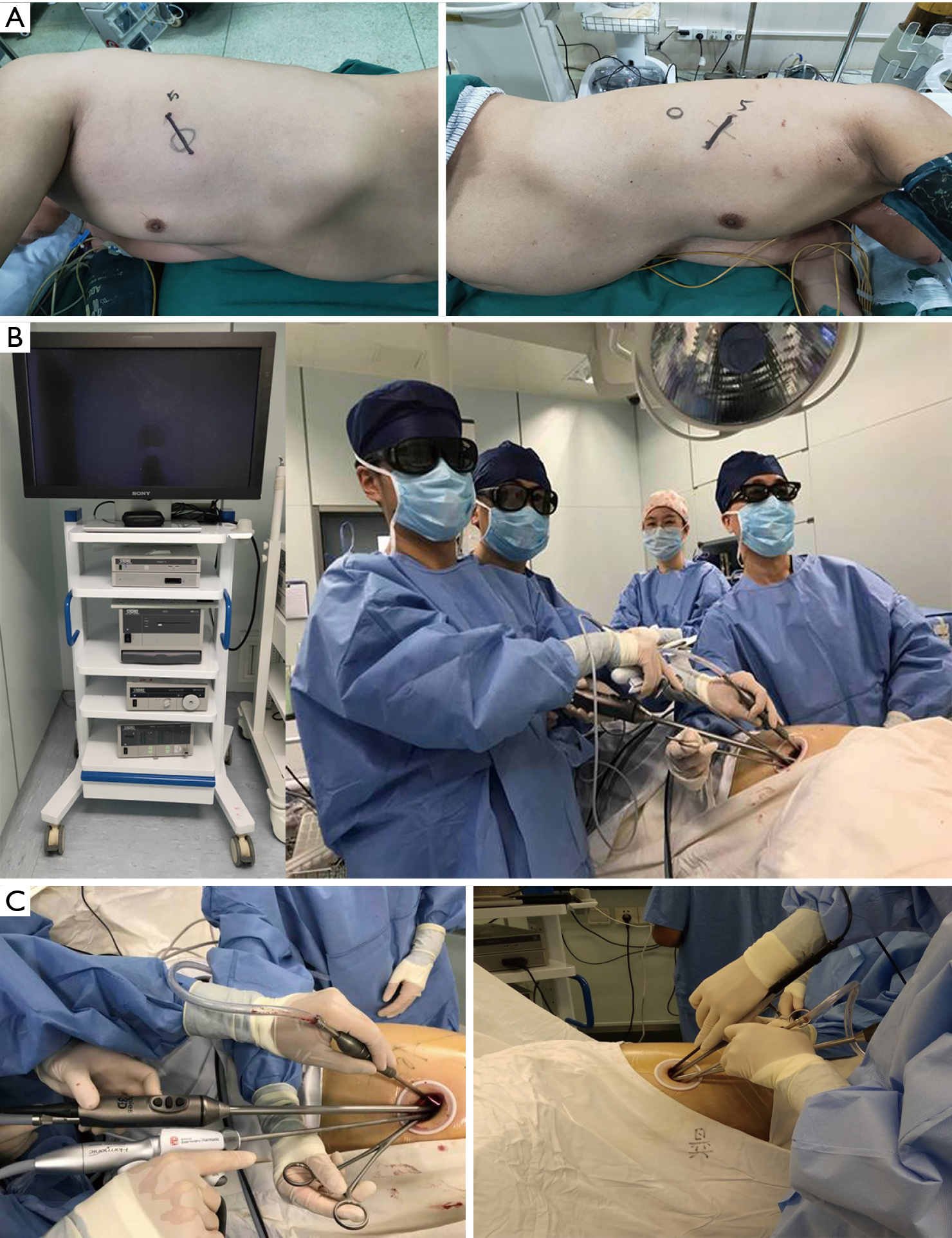 The patients were scheduled for a first re-visit for evaluation of postoperative recovery at four weeks after operations. Information was obtained from patients through phone call and outpatient clinic re-visit records. Then, a follow-up visit was scheduled every 3–6 months for tumor evaluation after the first visit, by chest CT scans, abdominal sonography or CT, and serum tumor markers. Other examinations were performed according to the physicians if it is necessary.

In this study, our primary study endpoint was the intraoperative outcomes including operation time, blood loss, the number of dissected lymph node and the conversion to open thoracotomy. The secondary endpoint was the postoperative outcomes, which included the drainage duration, the length of hospital stays, the rate of postoperative complications and the rate of prolonged air leak. The postoperative complications were described according to the Common Terminology Criteria for Adverse Events Version (CTCAE) 5.0, including hyperpyrexia, air leak, bleeding, subcutaneous emphysema, infection, chylothorax, pulmonary atelectasis and arrhythmia. And the prolonged air leak was defined the time was more than 3 days after surgical resection.

Normally distributed continuous variables are presented as the mean ± SD, otherwise as the median and range, which were testified by the t test. Categorical variables are shown as numbers and percentages, which were testified by the Pearson χ2 or Fisher’s exact test. Statistical analyses were performed using SPSS software (version 19.0; IBM-SPSS, Inc., Chicago, IL, USA). The statistical significance was set as the two-sided P<0.05 for our research analysis.

The clinicopathological characteristics of study cohort

There were totally 523 clinical stage I lung cancer patients receiving radically surgical resection in Shanghai Chest Hospital and 374 cases were enrolled in our retrospective analysis,. including 69 patients with c-VATS, 187 with single-port VATS and 118 with 3D single-port VATS (Figure 1). All the baseline characteristics of the primary cohort were listed in Table 1. 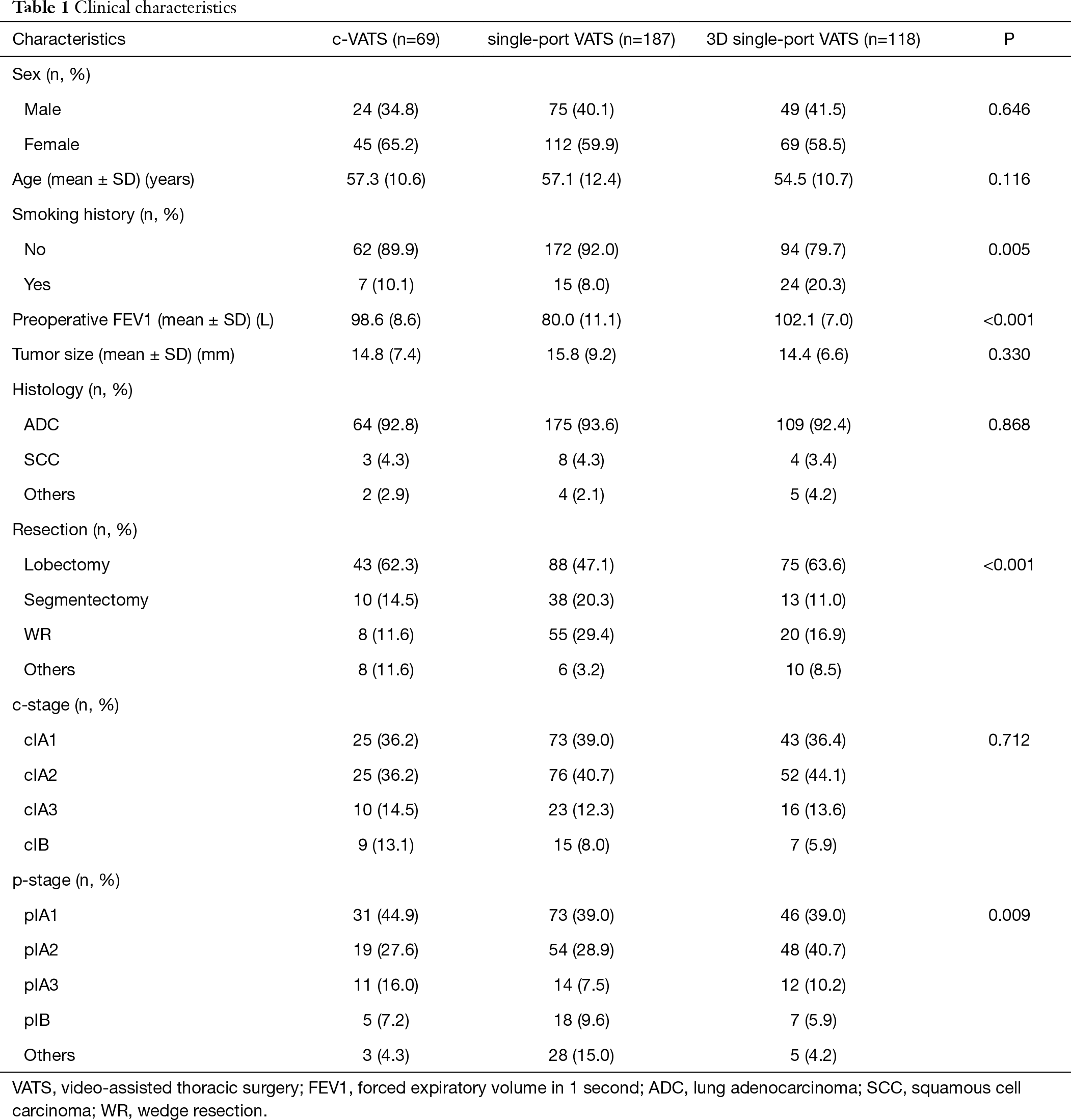 The analysis of perioperative clinical outcomes

As for the postoperative outcomes, 3D singe-port VATS still performed similar length of drainage duration (P=0.109) as well as postoperative complications (P=0.998) in contrast with other two groups. Nevertheless, our 3D single-port VATS demonstrated similar hospital stays in comparison with c-VATS, all of which were statistically higher than single-port one (P<0.001) (Table 2).

We further divided our patients into several subgroups, including lobectomy, segmentectomy.

VATS, initially described for lung cancer resection, has been rapidly developed since the 1990`s (1,8). Starting from traditional three or four incisions, the VATS operation has been revolutionized into single-port incision in recent years (9-11). Compared with multi-incision operation, single-port VATS has been declared as a promising minimally invasive surgical choice for early-stage lung cancer patients due to less intercostal space involved, less postoperative pain feeling, lower rate of morbidity and much more satisfied perioperative outcomes (12-14). The 3D visualization system, firstly reported by Dr. Dickhoff (6), has been gradually applied into video-assisted thoracoscopic surgery for a reduction of surgical time, better depth of visualization in comparison with traditional 2D VATS (15,16). What’s more, it also provided our clinicians a perfect substitution for patients when robotic-assisted thoracoscopic surgery was not permitted.

Hence, the combination of single-port VATS and 3D visualization system, which was defined as 3D single-port VATS, theoretically obtained the obvious advantages from these two promising procedures. However, the present articles about the 3D single-port VATS still very limited. Therefore, our research could become the first original attempt focusing on this new technique.

There were still several limitations in this research. First of all, it was a retrospective research which was analyzed from single center database, thus the biases were naturally unavoidable and the randomized clinical trial was strongly needed in further investigation. Second, there were only 374 patients selected in our research. Inadequate candidates might result in relatively less power of persuasion. Herein, large amounts of qualified patients should be enrolled in future verification. Third, what we focused in this study was perioperative outcomes and the recurrence and overall survival should be considered for the comparison between our 3D single-port VATS and c-VATS as well as single-port VATS in nearly future.

In conclusions, 3D single-port VATS, integrating the advantages of single-port VATS and three-dimensional vision of 3D VATS (20,21), targeting both the small incision with one single port and the precise resection with 3D visualization which represented the ideal of minimally invasive surgery and the precision medicine (22), was a safe and feasible technique and is promising for next-generation thoracoscopic surgery.

Funding: This study was supported by the National Natural Science Foundation of China (81572693).

Reporting Checklist: The authors have completed the STROBE reporting checklist. Available at http://dx.doi.org/10.21037/jtd-19-3465

Conflicts of Interest: All authors have completed the ICMJE uniform disclosure form (available at http://dx.doi.org/10.21037/jtd-19-3465). The authors have no conflicts of interest to declare.

Ethical Statement: The authors are accountable for all aspects of the work in ensuring that questions related to the accuracy or integrity of any part of the work are appropriately investigated and resolved. This retrospective study was approved by the Institutional Ethics Committee of Shanghai Chest Hospital (KS (Y) 1803), which was in line with the 1964 Helsinki Declaration (as revised in 2013). The written informed consent was not needed for this research.