Perhaps the greatest optimism for improving the fate of esophageal cancer centers around early-stage esophageal cancer. Currently, around a quarter of esophageal cancers present with cancer confined to the esophagus, with partial thickness involvement of the esophageal wall (i.e., T1-2,N0M0) (3). In this setting, complete tumor removal via esophagectomy has been associated with the highest cure rates, and has historically represented the standard of care (4,5).

Unfortunately, esophagectomy represents a particularly complex surgical procedure in which morbidity is common (e.g., roughly 30% of patients will have a major complication) (6), and the mortality rate is high (e.g., more than twice that of colon resection for colon cancer) (7). In fact, many early-stage patients may be considered ineligible for esophagectomy because of health-related concerns (i.e., comorbidities, poor performance status, nutritional status). Finally, some patients are simply unwilling to undergo complex surgery, a prolonged recovery, and lifestyle changes intrinsic to esophagectomy, as these are not congruent with their goals of care. Therefore, a need exists for non-surgical alternatives to definitively treat early-stage esophageal cancer.

The National Cancer Database (NCDB) is a comprehensive database that captures the care of approximately 75% of newly diagnosed esophageal cancer patients in the United States with detailed staging data, treatments and long-term follow-up (9). The survival associated with chemoradiation (CRT) for cT1 and T2 N0, M0 esophageal cancer was evaluated as a reflection of the potent of CRT to serve as a non-surgical treatment option for early stage esophageal cancer.

We present the following article in accordance with the Strengthening the Reporting of Observational Studies in Epidemiology (STROBE) guidelines for reporting observational studies (10) (Available at http://dx.doi.org/10.21037/jtd-20-1187).

The NCDB is a hospital-based tumor registry jointly managed by the American College of Surgeons and the American Cancer Society (11). The NCDB uses de-identified data and was therefore deemed exempt by the Yale University Institutional Review Board.

A query of the NCDB Participant User File from 2004 to 2016 was performed for treatment-naive patients 20 years or older with esophageal cancers managed with concurrent CRT. Only patients with clinical stage T1-2N0M0 tumors with available survival data, who underwent concurrent CRT with multi-agent chemotherapy and radiation dose ≥50 Gy, for whom the diagnosis of esophageal cancer represented their first malignancy were included. In order to mitigate bias arising from the tendency of unhealthy patients receiving nonsurgical therapy, all medically inoperable patients who were noted as: “surgery was not recommended/performed because it was contraindicated due to patient risk factors (comorbid conditions, advanced age, etc.)” were excluded (Figure 1). 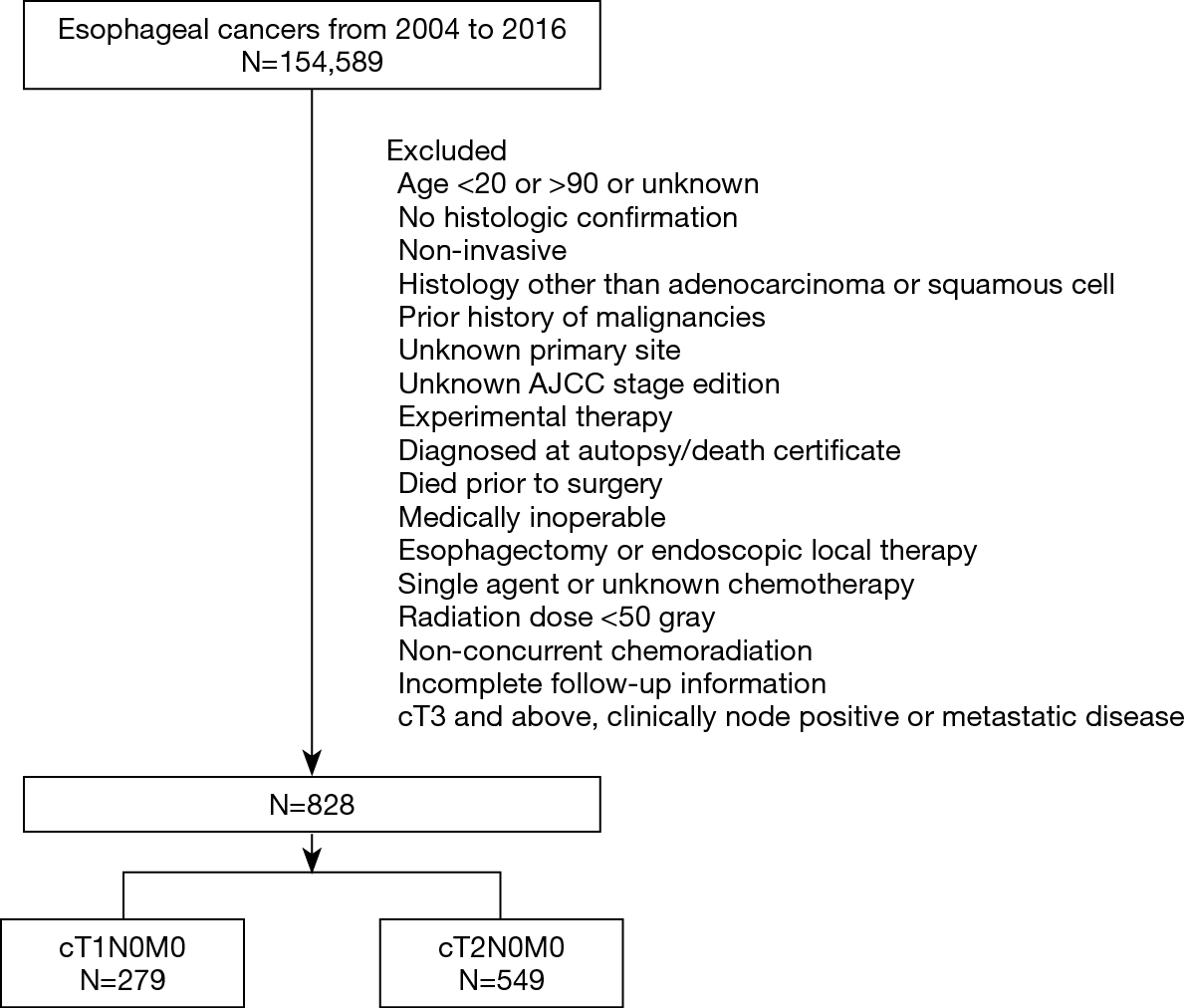 All non-surgical patients that had undergone definitive CRT for esophageal cancer were included. CRT was defined as multi-agent chemotherapy started within 14 days of the initiation of radiation therapy. Radiation dose ≥50 Gy was considered to be a definitive dose as per the National Comprehensive Cancer Network guidelines (5).

In an effort to mitigate the bias of unhealthy patients receiving definitive CRT, two sensitivity analyses were performed. First, the survival analyses were performed in a subset of comorbidity-free patients (i.e., Charlson score of zero). Next, in a further effort to ensure the health of the CRT population, the subset of early-stage esophageal cancer patients that had been recommended to undergo surgery, but refused, were studied (coded as “surgery of the primary site was not performed; it was recommended by the patient’s physician, but this treatment was refused by the patient, the patient’s family member, or the patient’s guardian”). These patients were, in theory, healthy enough to be considered surgical candidates, as surgery was recommended.

In an effort to provide a reference for outcomes of nonsurgically managed patients in this dataset, a surgical population was studied of patients with cT1 and cT2 tumors that were managed via esophagectomy during this time frame.

The study period was affected by a transition from the 6th edition to the 7th edition of the AJCC staging system, reflected in the NCDB starting in 2010. Patients coded prior to 2010 did not contain sufficient staging data for conversion to the 7th AJCC edition, therefore a homogenous study group was created by converting patients diagnosed between 2010 and 2015 to the corresponding 6th edition stage.

Overall, the rates of missing data were low (Table 1). Multiple imputation via chained equations was used to address missing data that appeared to be missing at random (12). Rubin’s rules were used to generate pooled effect estimates and variance across imputed data sets (13).

Overall survival (OS) was determined from the start of chemotherapy to the date of death or last follow up. The study was landmarked at 5 weeks, (median time to adjuvant chemotherapy after diagnosis) in an effort to mitigate immortal time bias. A complete list of variables collected in the NCDB is available online (14).

Bivariate analyses were performed using the χ2 test for categorical variables (or Fisher exact test when appropriate) and the Student t-test for continuous variables. Kaplan-Meier curves were generated to provide estimates for OS. 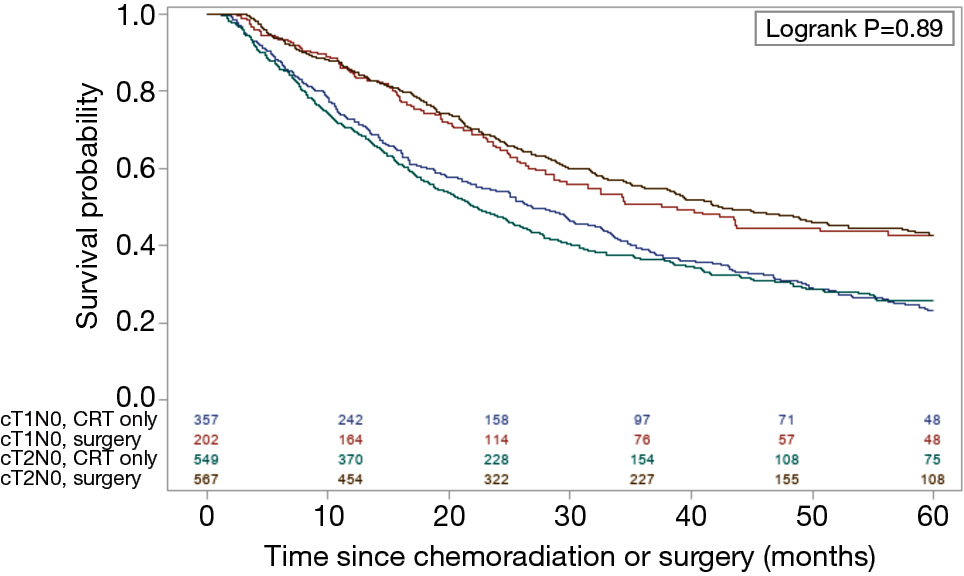 In an attempt to mitigate the impact of the competing survival risk of poorer patient health (as nonsurgical patients tend to be less healthy), the subset of patients in whom no comorbidities were identified (i.e., Charlson score zero) was studied. Among comorbidity-free patients with early-stage esophageal cancer managed with CRT, the 5-year survival was 23.4% for cT1N0M0 and 27.8% for cT2N0M0, with median survival of 29.1 vs. 23.0 months respectively, (Log-rank P=0.87) (Figure 3). 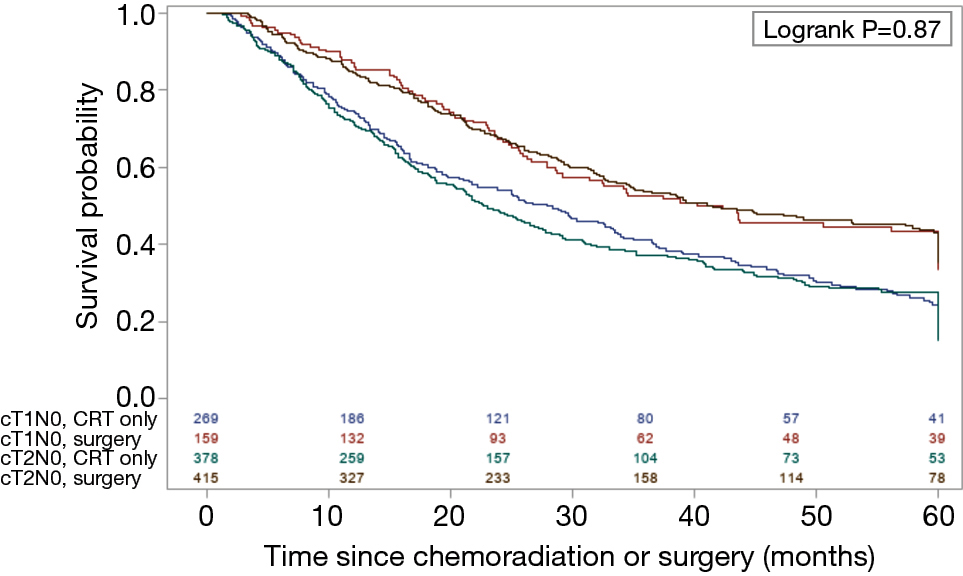 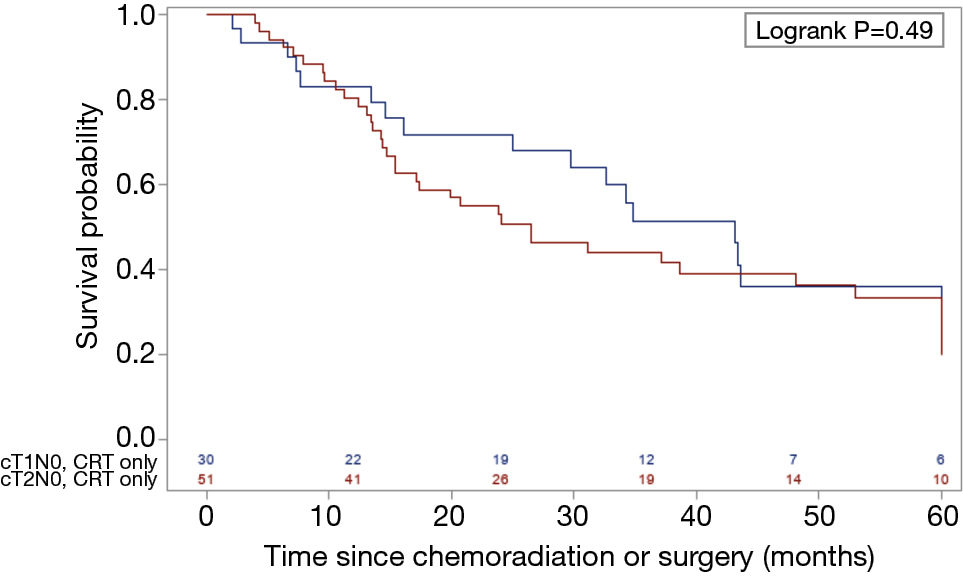 Overall, between a quarter and a third of patients with early-stage esophageal cancer achieved a 5-year survival estimate typically associated with cure. This survival rate is considerably lower than what has been reported for similarly staged subsets that were managed surgically (average of 50–70% 5-year survival) was well as those managed endoscopically (average of 80–85% 5-year survival) (17-20). This likely reflects a combination of differential ability to achieve local control (21), as well as health-related bias, as CRT has historically been a preferential treatment approach for patients that were not healthy enough for surgery. This potential has likely dissipated in part over time with the emergence of endoscopic therapies, which can be performed on a wide range of patients including those in poor health. However, for the subset that are ineligible for endoscopic treatment because of tumor depth or other tumor attributes (i.e., poor differentiation) CRT will likely be disproportionately populated with poorer health patients.

It is unclear how these findings mesh with existing data on the outcomes associated with definitive CRT for locoregionally confined cancer. More specifically, the randomized trials comparing CRT followed by surgery, to definitive CRT, identified a 2-year survival rate of ~35%, which is similar when compared to the current study (22,23). On the other hand, patients in the randomized trials had more advanced tumors (patients were at least cT3 or above) (22,23). Prior observational studies have estimated the 5-year survival with CRT to be approximately ~20%, which is similar to our study (24-27).

There was a trend towards improved survival with increasing efforts to mitigate health related bias. More specifically, there was a modest increase in survival as the study population was concentrated with healthier patients. The comorbidity free patients experienced superior survival and the patients who refused a recommended surgery even better. Because of this, we suspect that health related bias may continue to compromise the survival of the CRT cohort. This is relevant for the healthy patient that simply does not want to undergo esophagectomy to meet their goals of care. In this case, we would estimate that survival might be even higher than what is currently predicted.

The outcomes of early stage esophageal cancer managed with surgery were given as reference to allow readers to understand the general outcomes within this population in the NCDB. We recognize the tendency to interpret this as evidence towards comparative effectiveness of surgery versus definitive CRT (i.e., surgery associated with superior long-term survival). We caution against using the presented data to draw this type of conclusion, as the studies were not designed to balance the confounding risk factors in the surgical and nonsurgical cohorts. We do believe this reference is useful in calibrating the outcomes of esophageal cancer patients within the NCDB with other large datasets.

Our study has several limitations beyond what are typically associated with observational research. The accuracy of the stage determination was unclear, as the NCDB does not capture the extent of the clinical staging evaluation (i.e., endoscopic ultrasound and PET scan use). Therefore, it is possible that some patients were in reality more advanced than what was characterized. In the latter years the survival did increase a bit, which would support the possibility that enhanced stage evaluation was an opportunity to achieve superior outcomes. In addition, the specific type of chemotherapeutic agents was not captured. Certain regimens may have greater activity in esophageal cancer and affect the overall outcome in this cohort. Similarly, the number of chemotherapy cycles administered was unknown. We were able to restrict the population to patients receiving “multi-agent” chemotherapy, which is an important aspect of current treatment paradigms. Despite attempts to mitigate health bias, we must assume that patients that refused local therapy likely had health related issues (perhaps not documented) that also threatened their survival. Attempts were made to mitigate this bias by restricting our analysis to Charlson zero patients and patients that refused surgery. Although the surgery was recommended but “refused by the patient, the patient’s family member, or the patient’s guardian,” there was no specific reason for refusal noted in the NCDB and no documentation over who deemed the patient a surgical candidate (i.e., the patient’s internist or surgeon). Finally, we would not be able to distinguish patients who were planned to have CRT followed by surgery, and then developed a complication that rendered them ineligible to continue. This would likely only relate to cT2N0M0 patients, in whom trimodality therapy is a commonly used approach, but the inclusion of patients who were unable to recover from CRT would negatively impact the survival of the CRT cohort.

In summary, our study indicates that durable survival can be achieved in between a quarter and third of patients early-stage esophageal cancers treated with definitive CRT. Further study is needed to better inform shared decision making in patients interested in nonsurgical options but are ineligible for endoscopic management.

Reporting Checklist: The authors have completed the STROBE guideline checklist Available at http://dx.doi.org/10.21037/jtd-20-1187

Conflicts of Interest: All authors have completed the ICMJE uniform disclosure form (available at http://dx.doi.org/10.21037/jtd-20-1187). The authors have no conflicts of interest to declare.

Ethical Statement: The authors are accountable for all aspects of the work in ensuring that questions related to the accuracy or integrity of any part of the work are appropriately investigated and resolved. All procedures performed in studies involving human participants were in accordance with the ethical standards of the institutional and/or national research committee(s) and with the Helsinki Declaration (as revised in 2013). The NCDB uses de-identified data and was therefore deemed exempt by the Yale University Institutional Review Board.