Video-assisted thoracoscopic surgery (VATS) has proven to be a safe and effective surgical procedure that has been widely practiced; uniport VATS (U-VATS) has been pursued in search of a more minimally invasive surgical procedure. U-VATS was first reported by Rocco in 2004 for wedge resection (1), Gonzalez-Rivas later reported anatomical lung resection with U-VATS (2,3), and it has developed to more complex surgery, such as segmentectomy and sleeve resection (4). We started U-VATS in February 2019 and have performed more than 80 anatomical lung resections so far. In U-VATS, we use special curved forceps and a suction tube, and we have devised a length and angle so that the instruments do not interfere with each other.

On the other hand, whether U-VATS is truly minimally invasive for patients needs to be determined. The long-term prognosis needs to be evaluated for the therapeutic effect, but short-term evaluation is necessary to evaluate perioperative outcomes and pain for minimal invasiveness. Thus, the perioperative results of U-VATS were compared with those of conventional multiport VATS (M-VATS), and the postoperative analgesic prescription period was investigated. The aim of this study is to evaluate which approach reduced postoperative pain earlier and was less invasive in anatomical lung resection.

We present the following article in accordance with the STROBE reporting checklist (available at http://dx.doi.org/10.21037/jtd-20-2759).

The study was conducted in accordance with the Declaration of Helsinki (as revised in 2013). The study was approved by institutional ethics board of Maebashi Red Cross Hospital (NO.: 2020-17) and individual consent for this retrospective analysis was waived. 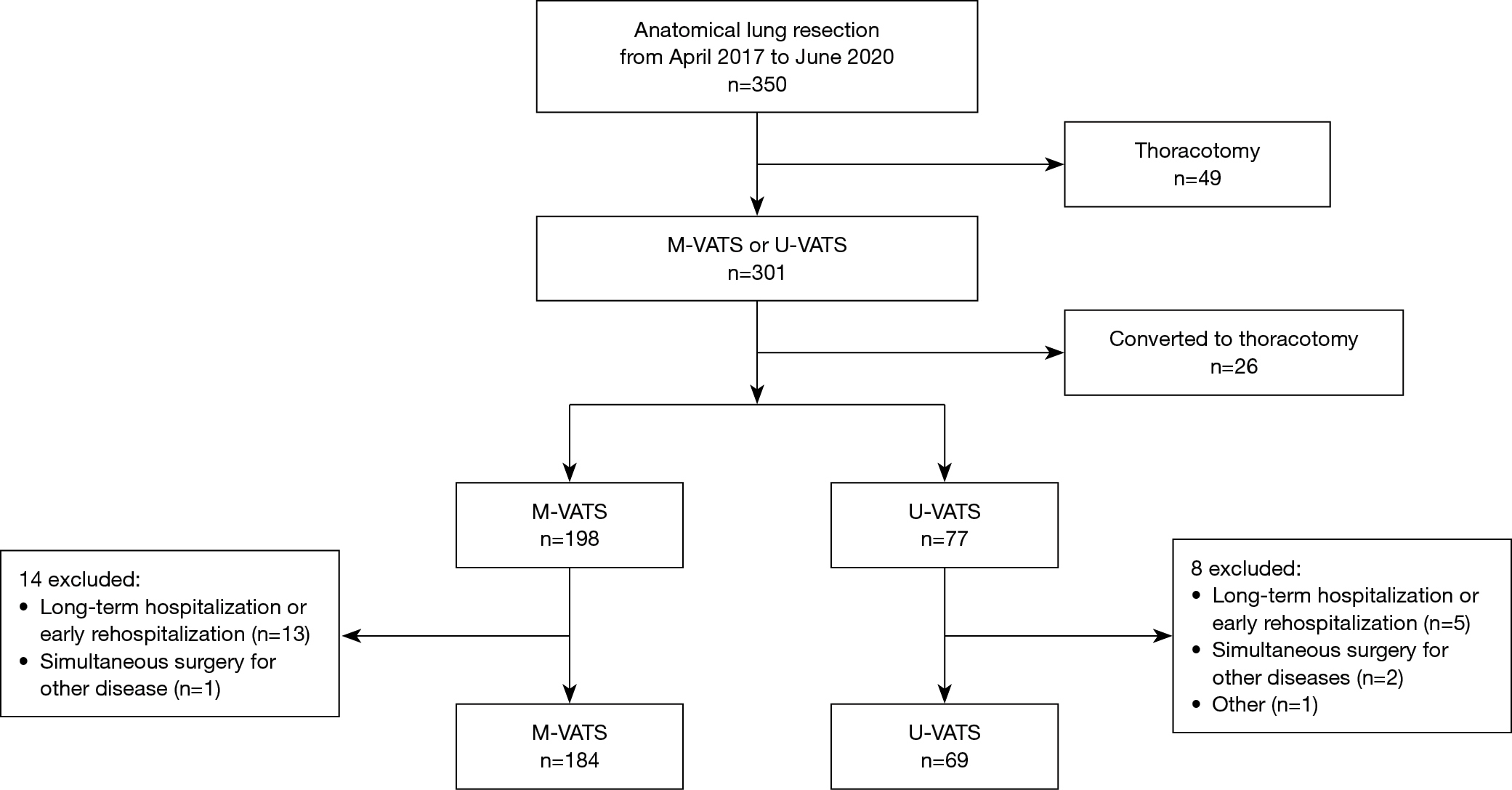 All surgical procedures were performed with the patient under general anesthesia with double-lumen intubation. The surgeon stood on the ventral side of the patient and the scopist on the dorsal side. A 3.5- to 4.0-cm skin incision was made at the 4th or 5th intercostal space in the anterior axillary line, and an Alexis wound retractor XS (Applied Medical, Rancho Santa Margarita, CA, USA) was attached. The thoracoscope (5- or 10-mm, 30-degree) was fixed to the dorsal wound edge. Basically, endoscopic staplers were used to separate the pulmonary vessels and bronchus, but in cases of segmentectomy, ligation with silk was performed according to the diameter of the vessels. All lung parenchyma was cut with an endoscopic stapler. A drainage tube was placed from the ventral wound edge.

Immediately after the operation, patient-controlled analgesia (PCA) with fentanyl at 0.006 µg/kg/min was used, and further intravenous infusion of acetaminophen was given. When oral administration became possible, oral administration of non-steroidal anti-inflammatory drugs (NSAIDs) was started, and PCA ended on postoperative day 1.

The chest drain was removed after confirming that there was no air leakage and the daily drainage amount was <200 mL. If the patient had major postoperative air leakage on postoperative day 2, pleurodesis to stop it was performed on the same day or afterwards. In our department, OK-432, minocycline, or autoblood was administered into the thoracic cavity via a thoracic drainage tube during the pleurodesis procedure.

The patients could be discharged if the chest X-ray taken the day after chest drain removal did not show any problem. Most patients made their first outpatient visit by the 7th to 10th day postoperatively, and if they complained of pain, additional analgesics were prescribed.

These postoperative management were the same in both groups. 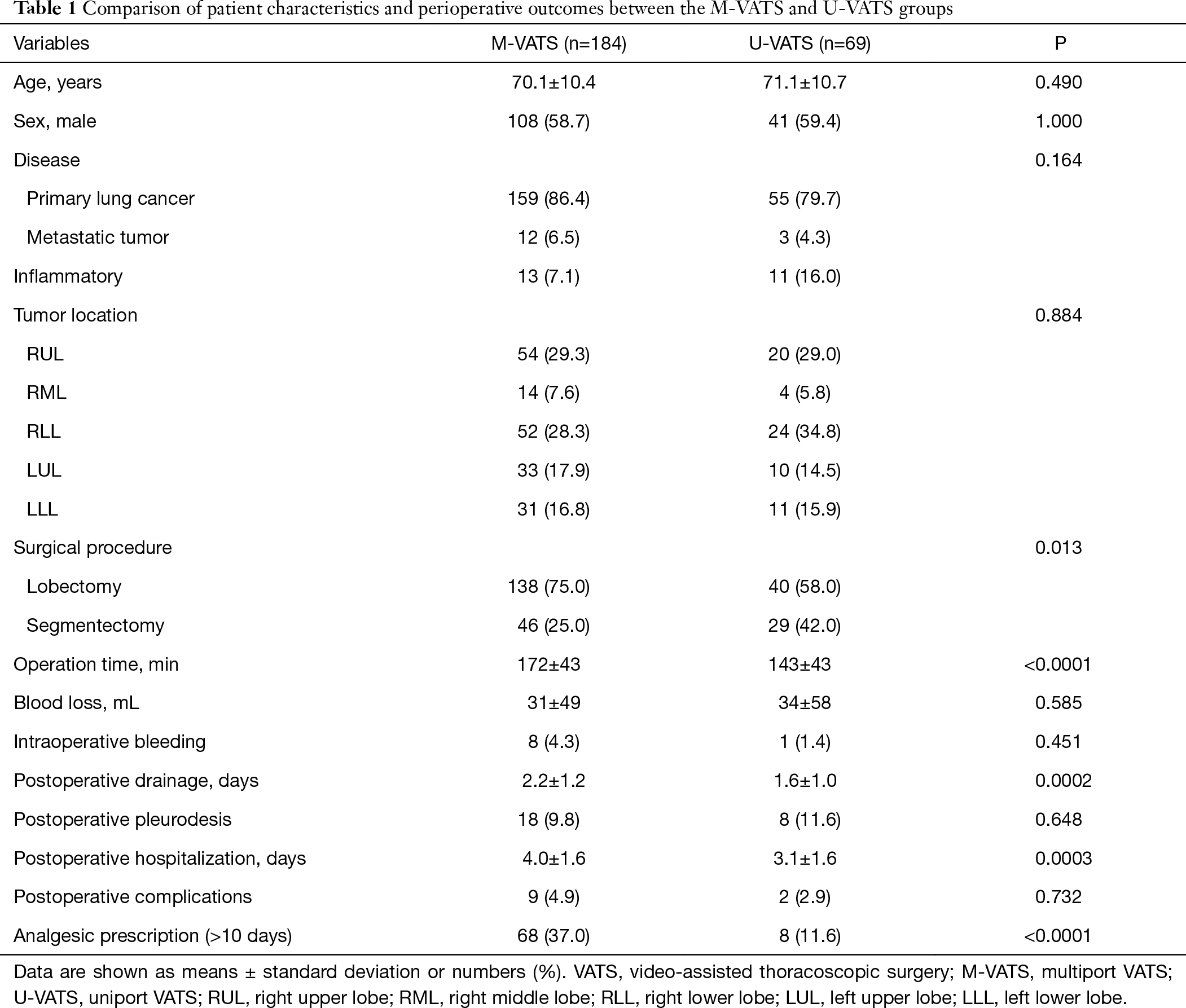 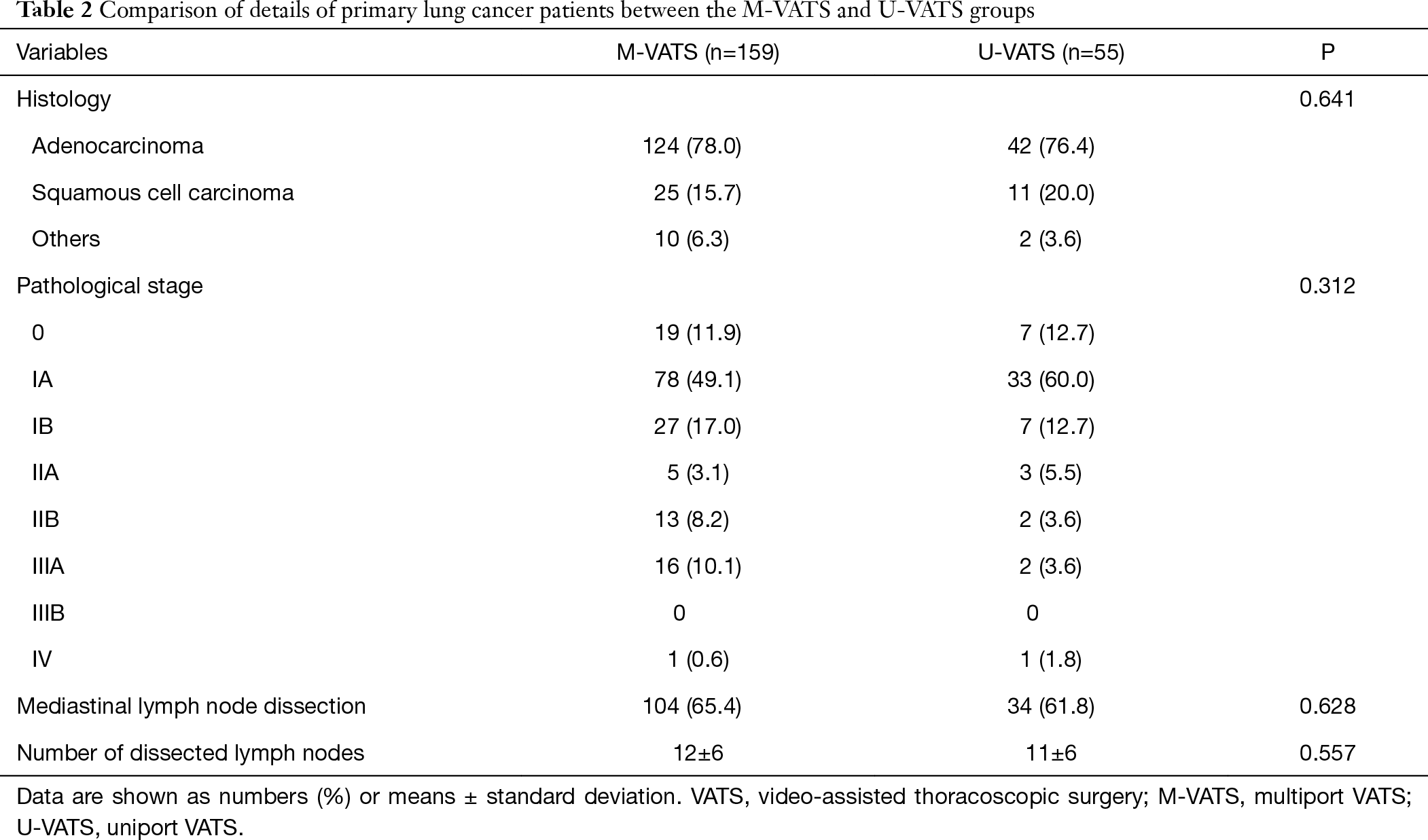 Postoperative pain may be affected by various factors, such as age, sex, surgical procedure, and so on. Postoperative drainage duration and with or without pleurodesis also have a significant effect. A multivariate analysis of analgesic prescription 10 days postoperatively was performed based on age, sex, U-VATS or M-VATS, drainage duration, operation time, and with or without pleurodesis. The multivariate logistic regression model showed that U-VATS was the only significant predictor (odds ratio =0.204, P=0.0001) (Table 3).

Various studies have tried to reduce postoperative pain by decreasing the number of ports in VATS. Most of them were retrospective, but many centers reported pain relief after U-VATS. In surgery for spontaneous pneumothorax, Yang et al. (5) demonstrated in their systematic review and meta-analysis that single-incision thoracoscopic surgery (SITS) was associated with less postoperative pain, a lower paresthesia rate, and a shorter hospital stay. Nachira et al. (6) demonstrated in their study that compared U-VATS and M-VATS for primary spontaneous pneumothorax that there was a significant difference in favor of U-VATS in the visual analogue scale (VAS) score for pain at 24 h (P<0.001), postoperative pain duration (P<0.001), analgesic intake (P=0.001), chronic paresthesia (P<0.001), and chronic neuralgia (P<0.001). U-VATS was also reported to significantly reduce postoperative pain during anatomical lung resection for lung cancer (7-11). However, these studies were all comparative studies with univariate analyses. Postoperative pain may be affected by various factors, including operation time, drainage duration, and postoperative complications such as a prolonged air leak that requires pleurodesis. In the present study, factors that purely affect postoperative pain were analyzed, excluding cases with long-term drainage, early readmission, and complications of other diseases. This is the first report that examined the causes of postoperative pain by multivariate analysis considering these factors.

In thoracic surgery, patients sometimes complain not only of normal wound pain, but also of paresthesia around the wound (12,13). Maguire et al. (12) performed a questionnaire study about the neuropathic component of chronic pain after thoracic surgery and reported that the prevalence of chronic pain was 57% at 7–12 months and 36% at 4–5 years. However, there was no significant difference by surgical approach (thoracotomy or VATS). During VATS, it is possible that excessive torqueing of the camera or instruments at the intercostal space can injure the intercostal nerve and damage the rib. This likelihood of intercostal neurovascular bundle injury is also potentially increased if proper caution is not exercised when instruments are introduced through the narrower confines of the posterior aspect of the intercostal space (14). In U-VATS, the incision is only in the anterior axillary line with a relatively wide intercostal space, and the absence of a port in the mid or posterior axillary line may prevent intercostal neuropathy on the narrow dorsal side of the intercostal space, leading to pain relief.

In the present study, operation time, postoperative drainage duration, and hospitalization were significantly shorter in U-VATS than in M-VATS. The reasons for this operation time shortening are: (I) differences in experience and technology due to the operators who are familiar with M-VATS and have transitioned to U-VATS; (II) the camera’s viewpoint from the anterior axillary line is directly aimed at the operator's target, which has the same field of view as thoracotomy; and (III) U-VATS does not require deployment by an assistant as in M-VATS or grasping of tissue, and a quick operation using characteristic forceps and energy devices can be performed. The U-VATS operations in the present study were mostly performed by the same operator and operation team, and the operation time was further shortened as the number of cases increased. However, the multivariate logistic regression model showed that operation time and postoperative drainage duration were not significant predictors of postoperative pain.

This study has some limitations. First, this was a retrospective, non-randomized, single-institution study. Second, the study period was too short to evaluate long-term effectiveness. Evaluation of chronic pain and neuralgia is also needed.

In conclusion, U-VATS shortened operation time, postoperative drainage duration, and hospitalization compared with conventional M-VATS, and it significantly reduced the use of postoperative analgesics. There were no differences in perioperative results such as blood loss and the postoperative complication rate, and U-VATS can be said to be a safe and minimally invasive surgical procedure.

Reporting Checklist: The authors have completed the STROBE reporting checklist. Available at http://dx.doi.org/10.21037/jtd-20-2759

Conflicts of Interest: All authors have completed the ICMJE uniform disclosure form (available at http://dx.doi.org/10.21037/jtd-20-2759). HI serves as an unpaid editorial board member of Journal of Thoracic Disease from Aug 2020 to Jul 2022. The other authors have no conflicts of interest to declare.

Ethical Statement: The authors are accountable for all aspects of the work in ensuring that questions related to the accuracy or integrity of any part of the work are appropriately investigated and resolved. The study was conducted in accordance with the Declaration of Helsinki (as revised in 2013). The study was approved by institutional ethics board of Maebashi Red Cross Hospital (NO.: 2020-17) and individual consent for this retrospective analysis was waived.