Prognostic nomogram for surgery of lung cancer in HIV-infected patients

Malignant lung tumors are often the main cause of death in patients with HIV infection (1). In the pre-antiretroviral (pre-ART) era, AIDS-defining cancers (ADCs) such as Kaposi sarcoma (KS) and non-Hodgkin's lymphoma (NHL) were common lung tumors in this group (2). With the widespread use of ART, the mortality caused by ADCs has gradually decreased. But the mortality caused by non-AIDS-defining cancers (NADCs) is gradually increasing. Malignant lung tumors, especially non-small cell lung cancer (NSCLC), have become the main cause of death in AIDS patients in the USA (3-5). followed in frequency by small-cell lung cancer. Some epidemiological studies have shown that unusual forms of lung cancer may also occur, such as lung sarcoma and neuroendocrine tumors (6).

For this retrospective study, we recruited patients from November 2011 to November 2019, at Shanghai Public Health Clinical Center, China which is a hospital specializing in infectious diseases. Most patients had been diagnosed as HIV-1 antibody-positive in regional hospitals and were already being treated before being referred to this center for further management. The overall survival time was calculated from the date of surgery to the time of death or the last follow-up. The follow-up was until February 1, 2020, with an average duration of 25.78±20.60 months. The study was conducted in accordance with the Declaration of Helsinki (as revised in 2013). The study was approved by the Shanghai Public Health Clinical Center’s Ethics Committee (Approval No. [2018] Y038) and written informed consent was obtained from the patients involved before enrolment, including when the data were collected retrospectively. The inclusion criteria were as follows: (I) a whole-blood confirmatory test conducted by the local CDC laboratory was positive for anti-HIV-1 antibody; (II) compliance with the TNM staging of lung cancer in the eighth edition interpretation of the International Association for the Study of Lung Cancer (IASLC); (III) post-operative pathology diagnosis of NSCLC; (IV) lung cancer clinical stages I-IIIA. The exclusion criteria were as follows: (I) mental illness leading to the patient being unable to comply with the study requirements; (II) cerebrovascular, hypertension, diabetes, and other surgical contraindications; (III) poor compliance.

After operation, the patients were followed up every two months during the first two years. Follow-up was subsequently performed every six months. Highly active antiretroviral therapy (HAART), CD4+ cell count and HIV RNA count were recorded in detail at each follow-up. The overall survival time (OS) and time to recurrence (TTR) were taken as the primary end-points. OS was defined as the interval between surgery and death or the date of a final follow-up. TTR was defined as the interval between surgery and recurrence.

Statistical analysis was performed using the R software (Version 3.6.2; https://www.R-project.org). Cox regression analysis was used for multivariate analyses. The performance of the nomogram was measured by the concordance index (C-index) and calibration curves (9-11). The larger the C-index, the more accurate was the prognostic prediction (9,10). To quantify the discrimination performance of the nomogram, Harrell’s C-index was measured. The nomogram was subjected to bootstrapping validation (1,000 bootstrap re-samples) to calculate a relatively corrected C-index (12-14). P<0.05 was considered statistically significant.

In total, 51 patients were enrolled in the study. There were 44 males and 7 females, the median age was 57 [30–77], At diagnosis, the mean serum CD4+ cell count was 395.37±188.64/µL (range, 33–940/mm3). Thoracotomy was performed in 27 patients (52.9%) and video-assisted thoracoscopic surgery (VATS) in 24 patients (47.1%). Eleven patients (21.5%) underwent partial resection, 38 patients (74.5%) underwent lobectomy, 2 patients (4%) bi-lobectomy. There were 39 cases of stage I, 5 cases of stage II, 6 cases of stage IIIA, and 1 case of stage IV. The only patient with stage IV lung cancer was diagnosed as stage IIIA before the operation, and the tumor metastasis was found during the operation, so the postoperative stage was stage IV. All relevant data of patients including demographic, disease, and treatment features are given in Table 1.

Independent prognostic factors in the cohort

Multivariate analyses demonstrated that age, CD4+ cell count, surgery method, and pathology stage were independent risk factors for tumor OS (Table 2). The hazard ratios (HR) of the CD4+ cell counts were 2.801, 16.796, and 2.849. The HR of the operation type was 3.342. The remainder of the features were not statistically significant. 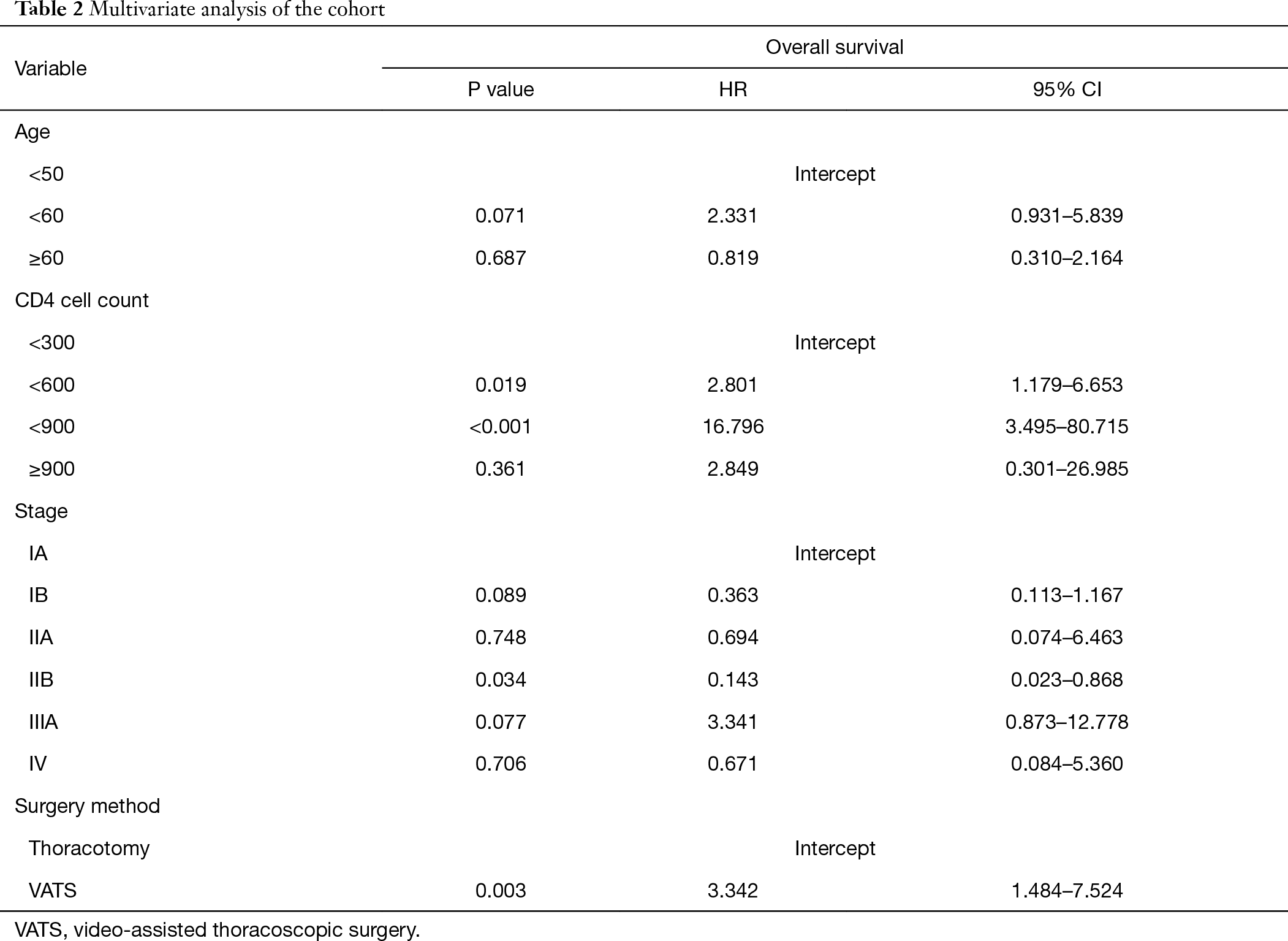 The developed model that incorporated all the independent predictors is presented as a nomogram (Figure 1). The nomogram included the four features: age, CD4+ cell count, stage, and surgery method. 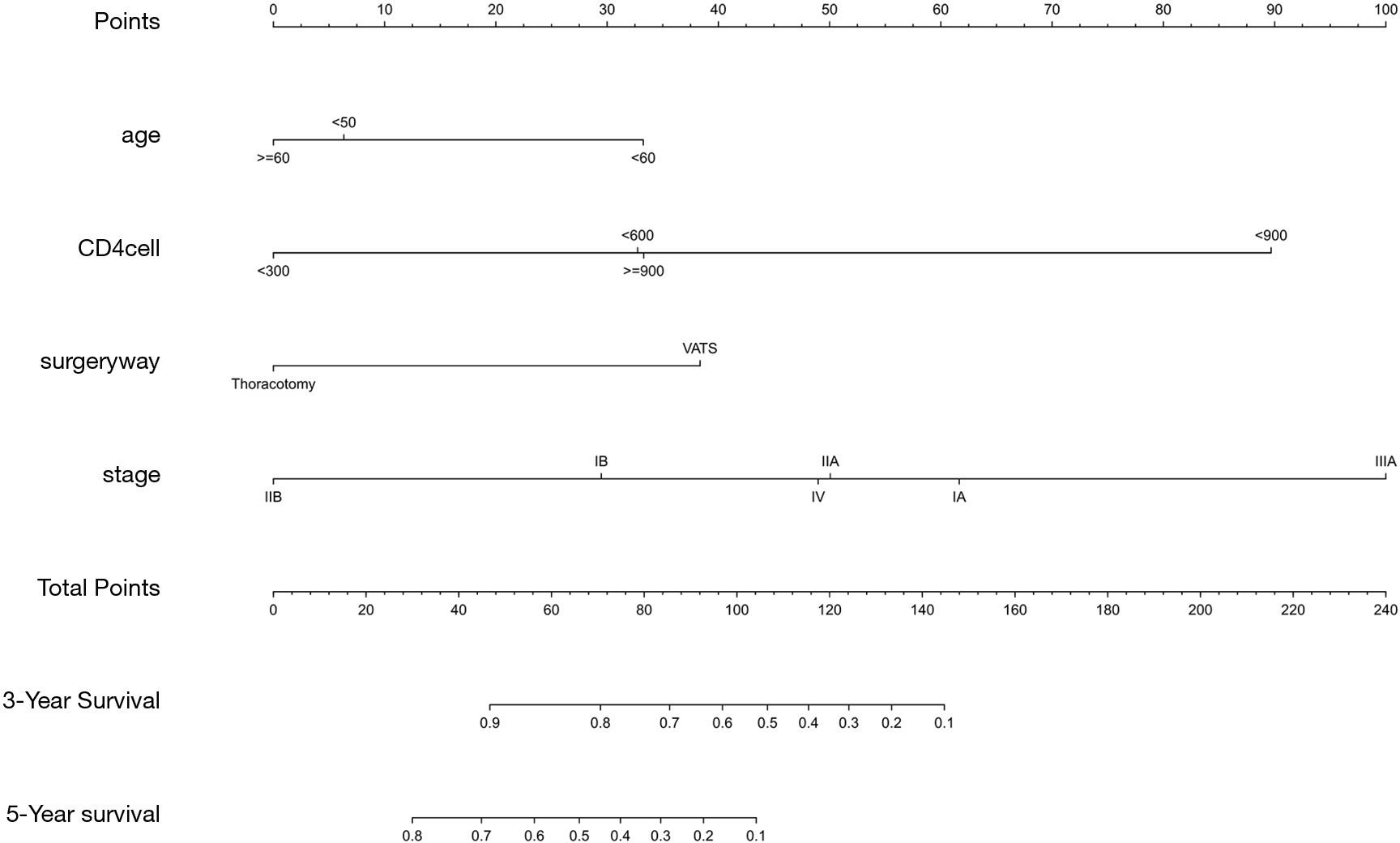 Figure 1 Developed prognosis nomogram. The prognostic nomogram was developed in the cohort from the variables of age, CD4+ cell count, surgery method, and pathology stage.

Apparent performance of the nomogram in the cohort

The calibration plot for the probability of survival at 3 or 5 years after surgery showed an optimal agreement between the prediction by nomogram and actual observation (Figure 2). The C-index for the prediction was 0.755 (95% CI: 0.715–0.795) for the cohort and was enhanced to 0.844 through bootstrapping validation, which suggested the model’s good discrimination and prediction capability. 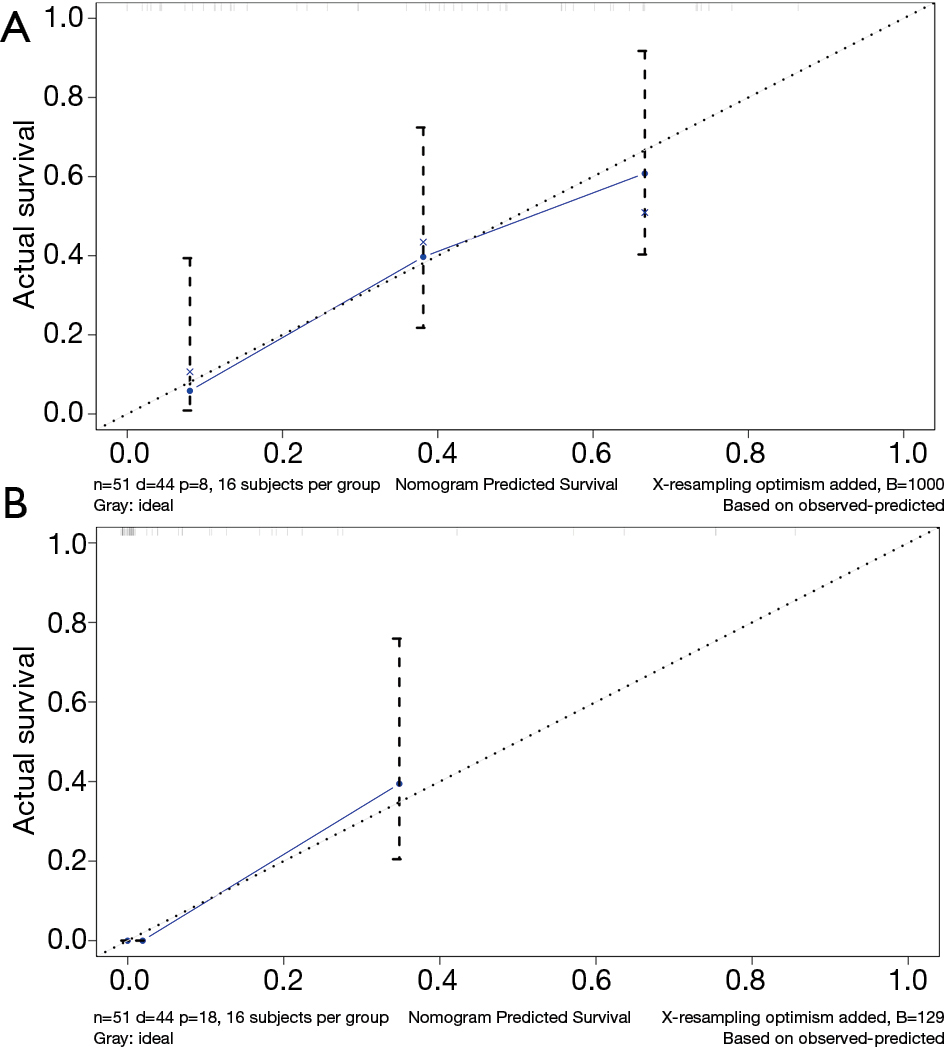 Nowadays, nomograms are widely used in oncology and other areas of medicine (15). They provide a friendlier interface, easier to understand prognosis, and higher accuracy, which can help clinical decision-making (16,17). In our study, for the first time a nomogram was developed to predict the prognosis of lung cancer in patients with HIV infection. The validated new predictive tool used only four readily available variables. The incorporation of demographic, surgical, ART treatment, and other risk factors into an easy-to-use nomogram will be helpful for future individualized predictions. The internally-validated good discrimination that was found with this large number of patients indicated that the nomogram may be widely and accurately used (17).

In the analysis of risk factors, age, pathological stage, CD4+ cell count and the method of surgical operation were independent risk factors related to prognosis. According to the nomogram, patients who had a lower pathological stage, 300–600/mm3 CD4+ cell count, and underwent thoracotomy had a better prognosis and this result was similar to that indicated by a survival curve obtained by a Kaplan-Meier survival analysis.

In agreement with previous studies (18,19), we confirmed age as an independent risk factor for the prognosis of lung cancer: the older the person is, the better the prognosis is; it is worse for younger patients. This may be due to a general decline in the ability of cells, particularly tumor cells, to divide in older patients, resulting in a decrease in the growth and invasiveness of tumors (20).

To our surprise, patients with CD4+ cell counts between 300/mm3 and 600/mm3 had a better prognosis. Generally speaking, CD4+ cells undertake many immune functions in the body, among which inhibiting tumor growth is a key function (21). Accordingly, the larger the CD4+ cell count, the stronger the expected tumor inhibitory activity and the better the deduced prognosis. The apparent discrepancy may be due to the presence in our study of only a small number of patients who had a CD4+ cell count of more than 900/mm3.

Most HIV-infected patients who develop lung cancer have a high probability of lymph node metastasis and VATS is generally recommended for early lung cancer. In our predictive map, the prognosis of patients who undergo VATS is poor (7). HIV-infection is often accompanied by a variety of opportunistic pulmonary infections and associated pleural and mediastinal lymph node adhesions. Such adhesions are a contraindication of VATS and accordingly a high proportion of our patients with early lung cancer underwent thoracotomy.

Although there are some shortcomings, the new prediction model can combine a variety of independent risk factors to predict the survival probability more accurately than a simple survival curve. Clinicians can use it to guide diagnosis and treatment. The procedures giving the highest probability of survival can then be selected for implementation. In fact, the prognosis of HIV-infected patients with lung cancer is generally poor and the issuance of relevant clinical diagnosis and treatment guidelines is a matter of urgency. In the interim, this new predictive model can provide guidance to improve the prognosis of patients as much as possible.

This study developed a novel nomogram with a moderate accuracy to help clinicians assess the prognosis of lung cancer patients with HIV infection who undergo surgery. This tool requires external validation, and additional studies are required to determine whether it can be applied to other patient groups.

Reporting Checklist: The authors have completed the TRIPOD reporting checklist. Available at http://dx.doi.org/10.21037/jtd-20-2268

Conflicts of Interest: All authors have completed the ICMJE uniform disclosure form (available at http://dx.doi.org/10.21037/jtd-20-2268). The authors have no conflicts of interest to declare.

Ethical Statement: The authors are accountable for all aspects of the work in ensuring that questions related to the accuracy or integrity of any part of the work are appropriately investigated and resolved. The study was conducted in accordance with the Declaration of Helsinki (as revised in 2013). The study was approved by the Shanghai Public Health Clinical Center's ethics committee (Approval No. [2018] Y038) and informed consent was taken from all the patients.