Sirtuin (SIRT) is a family of NAD+-dependent histone deacetylases, regulating metabolism and aging-related diseases (e.g., diabetes, cancer, neurodegenerative and cardiovascular diseases) (1-5). Recently, SIRT2, as a member of sirtuin family, was reported to play a significant role in cardiovascular disease. It has been previously shown that over expression of cardiac-specific SIRT2, promoting AMP-activated protein kinase (AMPK) activation, can protect heart against Ang II-induced cardiac hypertrophy and fibrosis (6), while SIRT2 can repress nuclear factor of activated T-cells (NFAT) to maintain cardiac homeostasis and ameliorate cardiac dysfunction (7). In addition, SIRT2 gene is down-regulated in the cardiac tissue in cardiosurgical patients undergoing remote ischemic preconditioning (8), and functional genetic variants in acute myocardial infarction(AMI) patients were observed as well (9).

It is noteworthy that, SIRT2 is expressed in various metabolically relevant tissues (e.g., the heart, brain, and adipose tissue) (10), and is also detected in circulation (11). SIRT2 plays a pivotal role in various physiological processes in maintaining metabolic homeostasis, including inflammation, oxidative stress, and mitochondrial function, as well as adipocyte differentiation, fatty acid oxidation, and insulin sensitivity. SIRT2 may enhance acetylation and activation of NF-κB p65 (12,13) and regulate expression of CXCL2 and CCL2 (14) to suppress inflammatory process, while regulate acetylation of G6PD to modulate NADPH homeostasis and cell survival during oxidative stress (15). Dysregulated SIRT2 activity has been found to be associated with inflammatory and metabolic disorders (10,16). Moreover, AMI, leading to the highest mortality among cardiovascular diseases, is involved in both metabolic dysfunction and inflammatory responses (17-19). The cause of AMI patients’ death is either heart failure or a malignant arrhythmia, especially heart failure, which is closely associated with inflammatory responses and contributes to long-term mortality after AMI (20,21).

However, no study has concentrated on the role of circulating SIRT2 in AMI yet. In the present study, we investigated the relationship between plasma SIRT2 level and AMI, and evaluated the association of plasma SIRT2 level with major adverse cardiovascular events (MACE) and heart failure after AMI. Our results clarified the role of plasma SIRT2 level in AMI prognosis. We present the following article in accordance with the STROBE reporting checklist (available at http://dx.doi.org/10.21037/jtd-20-2234).

This is a prospective observational study. Study subjects were consecutively recruited from Beijing Chao-yang Hospital (Beijing, China) between October 2018 to March 2019. A total of 129 AMI patients [including 74 ST-segment elevation myocardial infarction (STEMI) and 55 non-ST-segment elevation myocardial infarction (NSTEMI)] with heart attack within 12 hours were enrolled in the present study. All patients successfully underwent revascularization in emergency before hospitalization. The diagnosis of AMI was carried out at the time of admission on the basis of criteria, including clinical symptoms, typical changes in electrocardiogram (ECG), elevated cardiac biomarkers (cardiac troponin-I and creatine kinase MB). The exclusion criteria were as follows: neoplasm, severe organ failure, or other infectious or inflammatory conditions. Written informed consent was obtained from all the participants. This study was conducted in accordance with the Declaration of Helsinki (as revised in 2013) (22), and the research protocol was approved by the Ethics Committee of Beijing Chao-Yang Hospital (No. 2018-2-7-3) and informed consent was taken from all the patients.

Baseline laboratory measurements were obtained within the first 12 hours of admission. Plasma of SIRT2 levels were assayed using a commercially available enzyme-linked immunosorbent assay (ELISA) kit (R&D Systems Inc., Minneapolis, MN, USA) according to the manufacturer’s instructions. The coefficient of variation for the assay was <5%. Fasting venous blood samples were collected to measure the levels of glucose, homocysteine, creatinine, and lipids (including the levels of total cholesterol, high-density lipoprotein cholesterol, and triglycerides).

Continuous variables were expressed as mean ± standard deviation (SD) and quartiles, while categorical variables were expressed as percentages and numbers. Comparisons between groups were performed using chi-square test for categorical variables, and two-sample t-test for comparing continuous variables in normally distributed status, as well as Kruskal-Wallis test for comparing continuous variables in non-normally distributed status. Pearson’s and Spearman’s correlation coefficients were used for comparing parametric and nonparametric variables, respectively. Cox proportional hazards analysis was carried out to determine the independent predictors of MACE. All the analyses were performed using SPSS 24.0 software (IBM, Armonk, NY, USA), and a 2-tailed P<0.05 was considered statistically significant.

A total of 129 AMI patients (mean age: 62.2±12.7 years old, male/female: 96/33) were enrolled in the present study, including 74 STEMI and 55 NSTEMI. The median follow-up period was 8 months, and during the follow-up, 22 (17.1%) and 16 (12.4%) AMI patients experienced MACE and heart failure respectively. The median value (25th, 75th percentiles) of plasma SIRT2 level was 69.0 (48.9, 109.0) pg/mL. According to the 75th percentile value of plasma SIRT2 level, we divided all the patients into high-level group (plasma SIRT2 level ≥109.0 pg/mL) and low-level group (plasma SIRT2 level <109.0 pg/mL), and clinical parameters between the two groups were compared (Table 1) . Compared with the low-level group, the high-level group had significantly higher levels of C-reactive protein (CRP), blood urea nitrogen (BUN), and serum creatinine. 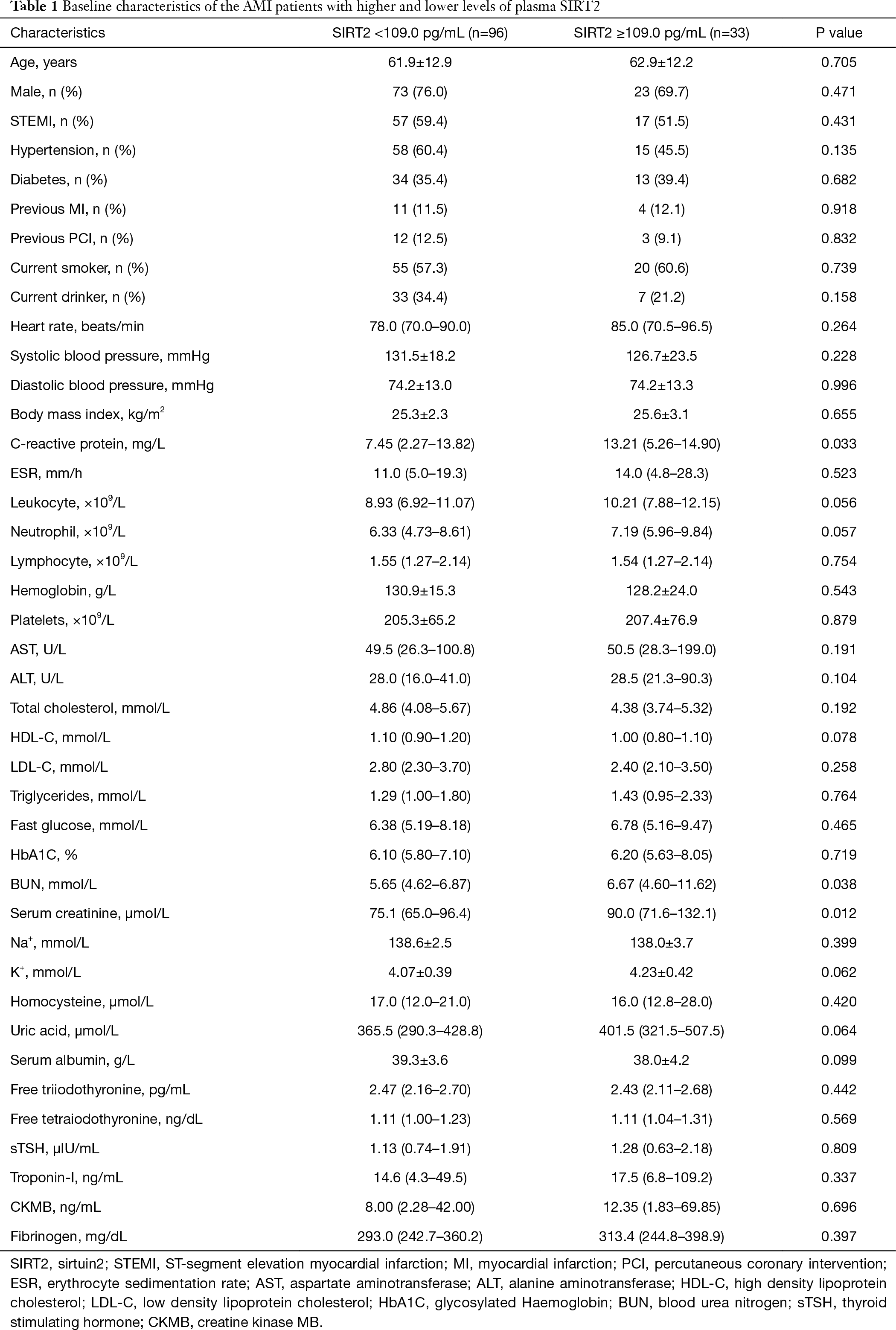 Association between plasma SIRT2 level with indicators of AMI severity 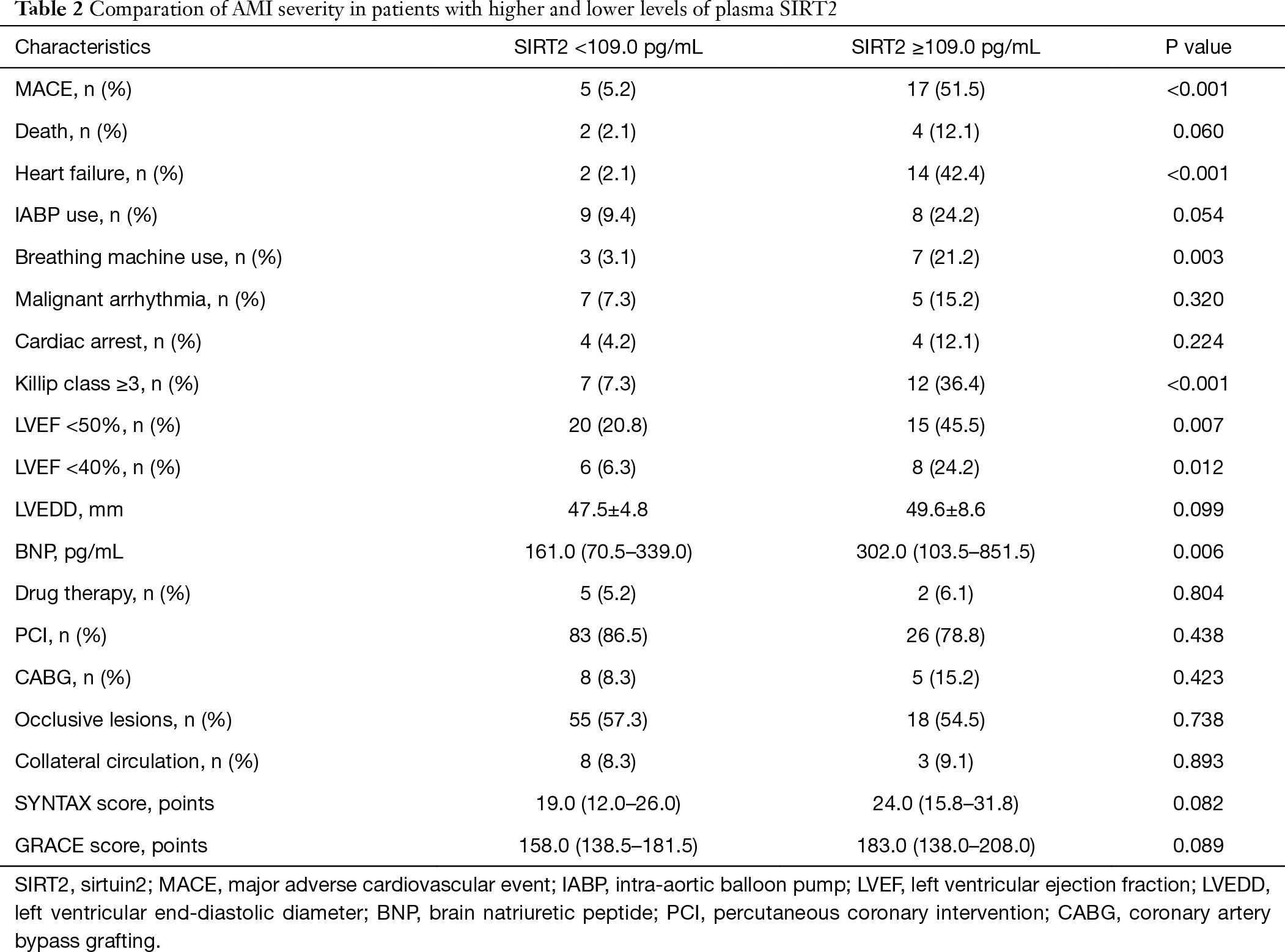 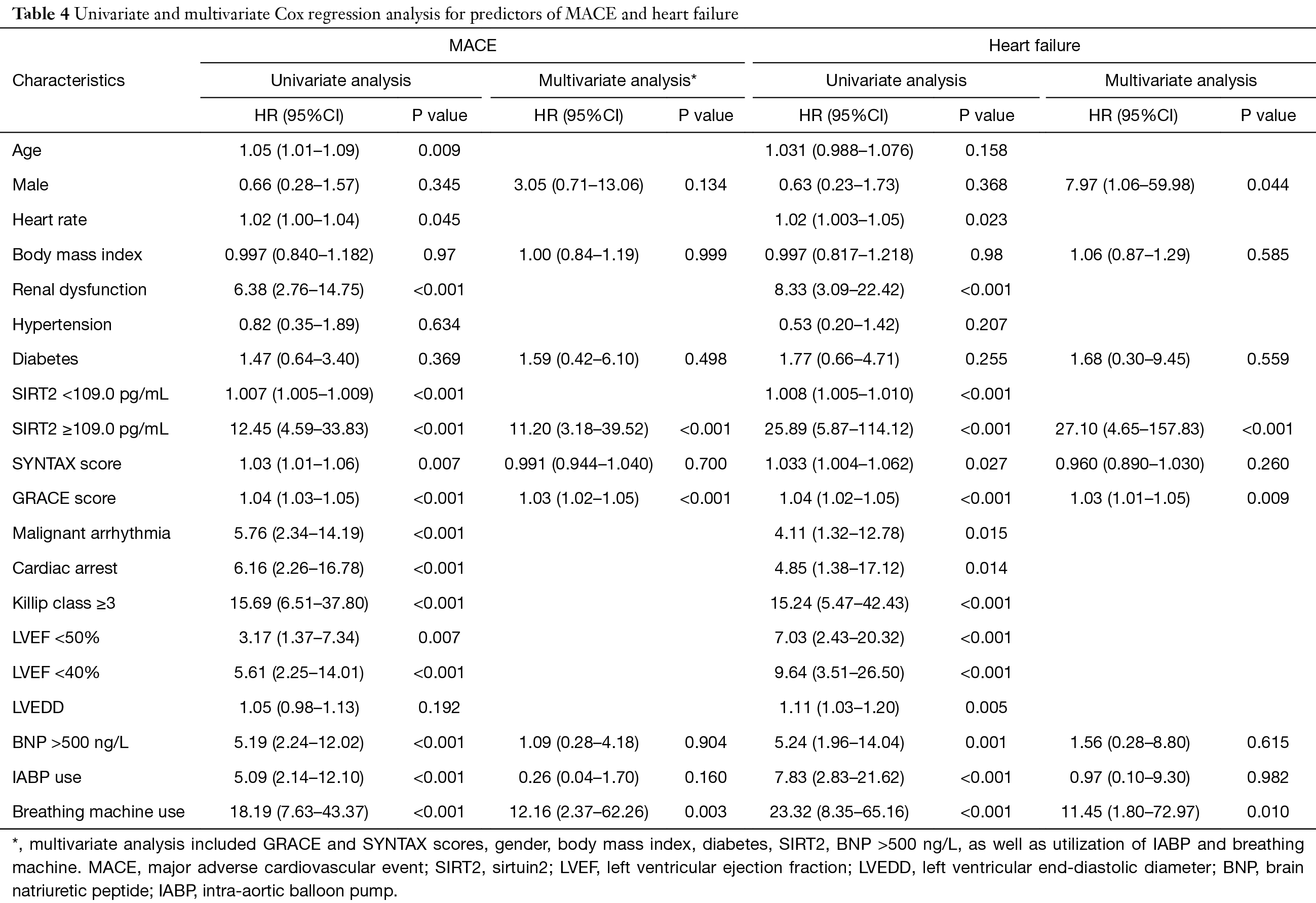 Accumulating evidence has uncovered SIRT2 played important roles in human diseases. SIRT2 showed increased levels in plasma in patients with cervical cancer compared with controls, and was considered as a potential biomarker to diagnose cervical cancer (11). SIRT2 was also increased in the peripheral blood from Alzheimer’s disease (AD) subjects and elderly controls compared to levels in healthy young control, and might possibly be considered peripheral markers of AD (23). Circulating SIRT2 and other inflammatory biomarkers were significantly higher in rheumatoid arthritis (RA) patients with periodontal disease (PD) than RA without PD, indicating a augmented systemic inflammation status (24).

Previous studies demonstrated that SIRT2 was a protective factor in cardiovascular disease and also showed that expression levels of SIRT2 protein were down-regulated in cardiomyocytes treated with phenylephrine or isoproterenol (7), as well as in hypertrophic hearts of mice (6) or even in hearts of T1DM rats (25). Sirt2-KO markedly exaggerated cardiac hypertrophy and fibrosis, as well as causing decreases of cardiac ejection fraction and fractional shortening in aged mice and Ang II-infused mice (6); besides, overexpression of SIRT2 attenuated agonist-induced cardiac hypertrophy in cardiomyocytes (7). Moreover, SIRT2 mediated hypertension-induced vascular remodeling (26). In cardiosurgical patients undergoing remote ischemic preconditioning, SIRT2 gene was down-regulated in the cardiac tissue (8). Functional genetic variants within the SIRT2 gene promoter were found in AMI patients (9). It was previously reported that SIRT2 played a substantial role in cardiovascular disease. In addition, SIRT2 has been detected in the circulation (11), however, there is no evidence about the role of circulating SIRT2 in AMI. In the present study, we noted that circulating SIRT2 was an acceptable biomarker for AMI, and the higher plasma SIRT2 level was associated with poorer AMI prognosis, especially for worse cardiac function.

Additionally, SIRT2 was reported to be associated with renal inflammatory injury, in which SIRT2 showed an anti-inflammatory effect through regulating p65 binding to the promoters of CXCL2 and CCL2 (14). In the current study, plasma SIRT2 level was correlated with renal function in AMI, which might be due to the inflammatory responses in AMI patients.

The present study contains a number of limitations: (I) the period of follow-up was short, therefore, long-term follow-up studies need to be conducted to further analyze the association between plasma SIRT2 level and AMI; (II) this is a study with small sample size; large sample size should be carried out to verify our findings.

Our findings revealed that plasma SIRT2 level was a proper biomarker to predict heart failure and MACE after AMI, which, as indicated by previous studies, might be through regulating metabolic and inflammatory pathways.

Funding: This research was supported by Natural Science Foundation of China (No. 81800304).

Reporting Checklist: The authors have completed the STROBE reporting checklist. Available at http://dx.doi.org/10.21037/jtd-20-2234

Conflicts of Interest: All authors have completed the ICMJE uniform disclosure form (available at http://dx.doi.org/10.21037/jtd-20-2234). The authors have no conflicts of interest to declare.

Ethical Statement: The authors are accountable for all aspects of the work in ensuring that questions related to the accuracy or integrity of any part of the work are appropriately investigated and resolved. The study was conducted in accordance with the Declaration of Helsinki (as revised in 2013). The study was approved by the Ethics Committee of Beijing Chao-Yang Hospital (No. 2018-2-7-3) and informed consent was taken from all the patients.