Mutational signatures in squamous cell carcinoma of the lung

Lung cancer is a leading cause of cancer-related death in the world, with 1.76 million cases worldwide and 74,300 cases in Japan (1,2). Although recent advances in molecular targeting therapy and genetic profiling have improved the overall survival in advanced lung cancer patients, these treatments rarely cure lung cancer. In addition, effective molecular targets for therapy for lung squamous cell carcinoma have not been identified. In our previous study, we were unable to identify genetic alterations that could serve as therapeutic targets (3).

Recent advances in immune checkpoint inhibitors have shown promise for lung cancer patients without driver mutations. The programmed cell death-1 (PD-1)/programmed death-ligand 1 (PD-L1) pathway enables tumors to escape from immunosurveillance even if the tumor expresses neo-antigens (4). These neo-antigens usually arise from passenger mutations, and therefore tumor mutation burden (TMB), along with tumor PD-L1 expression, has drawn attention as a biomarker for anti-PD-1/PD-L1 therapy (5). Several kinds of mutagens, such as cigarette smoke, age, and insufficient DNA damage response have been reported to have an influence on TMB and PD-L1 expression (6). However, our previous study could not clarify the factors related with tumor PD-L1 expression and/or TMB in lung squamous cell carcinoma.

Here, we examined the mutagens that may be related to PD-L1 expression and TMB in lung squamous cell carcinoma by performing mutational signature analysis. We present the following article in accordance with the MDAR reporting checklist (available at http://dx.doi.org/10.21037/jtd-20-2602).

Sixty-seven patients who underwent surgical resection of primary lung squamous cell carcinoma between December 2010 and January 2016 at Kyushu University Hospital as well as patients who underwent the same surgery from May 2009 to January 2016 at Niigata University Hospital were included in the study. Patient selection and library preparation for comprehensive genomic sequencing were previously described (3). Clinicopathological features, including age at surgery, smoking history, and pathologic TNM stage (7th edition), were examined (8). This study was approved by the Institutional Review Boards of both the Department of Surgery and Science, Graduate School of Medical Sciences, Kyushu University Hospital (IRB number: 674-01) and the Division of Thoracic and Cardiovascular Surgery, Niigata University Hospital (IRB number: 774). Written informed consent was obtained from all participants. The study was conducted in accordance with the Declaration of Helsinki (as revised in 2013).

Mutational signature analysis was performed using MutationalPatterns, R version 3.5.1 (10). A mutation matrix of the 96 mutation type classification was made from each sample’s Variant Call Format (VCF) data, based on the six substitution subtypes and by incorporating information on the bases immediately 5' and 3' to each mutated base. Alexandrov et al. proposed 30 distinct signature patterns from curated data generated by The Cancer Genome Atlas (TCGA) and the International Cancer Genome Consortium (ICGC) using non-negative matrix factorization (7). SI7, SI4, SI6/15, SI2/13, and SI5 were the main signatures in non-small cell lung cancer in an analysis of 1,144 samples (6). These signatures are related to exogenous mutagens, with SI7 related to ultraviolet (UV), SI4 to smoking, SI6 and S15 to mismatch repair (MMR) defect, SI2 and S13 related to apolipoprotein B mRNA editing enzyme, catalytic polypeptide-like (APOBEC), and SI5 to aging or “clock-like” (7). We used these seven signatures instead of deciphering them from our own data because of the small number of total mutation counts in our datasets.

Mutational signature analysis is usually performed using datasets from whole genome sequences (3 billion base pairs) or whole exome sequences (30 million base pairs). We thus performed a preliminary analysis using publicly available TCGA data to determine whether the mutational signature analysis could be performed on a mutation matrix based on a CANCERPLEX mutation dataset (covering 1.66 million base pairs of genomic DNA). As an approximated hypothetical Mutation Annotation Format (MAF) data, mutation data of the 415 genes used for CANCERPLEX were extracted from a MAF file of whole exosome sequencing data from 487 lung squamous cell cancer patients (12). Mutational signatures were then analyzed using Maftools, R version 0.9.30 (13) from the virtual MAF data and from the original MAF data. Although the proportion of contribution for each signature was different, three estimated signatures, SI4, SI7, and SI13, were the same, suggesting that the mutational data of 415 genes is enough to estimate the types of mutational signatures (Figure S1).

The relationship between TMB and smoking or PD-L1 expression

The characteristics of the 67 patients were previously reported (3), for example: 60 (89.6%) patients were male, all patients were smokers with median pack-year index (PYI) of 50 (range: 7–150), and the median age of all patients was 70 (range: 47–84) years (3). Mutational signatures were calculated from VCF data from each sample, and mutation counts were then reconstructed. The reconstructed mutation counts ranged from 13.3 to 98.7, with a median count of 30.1 (Figure 1). Fifty-six patients (83.6%) had more than four signatures, with SI6 as the most frequently observed (64 cases, 95.5%). Other signatures were observed as follows: SI2 in 26 cases (38.8%), SI4 in 45 (67.2%), SI5 in 59 (88.1%), SI7 in 40 (59.7%), SI13 in 44 (65.7%), and SI15 in 21 (31.3%). The patient with the highest mutation count showed predominant signatures related to MMR defect (SI6 and SI15), suggesting microsatellite instability-related hypermutation. However, the patient had no mutation in MMR-related genes detected by CANCERPLEX. Another patient who had the highest count in the UV-related SI7 (reconstructed mutation count 4.56, 12.3%) had an occupational exposure of UV, as he was employed as a neon sign engineer. Both smoking habits, plotted as PYI, and PD-L1 TPS showed no relationship with the reconstructed mutation counts. 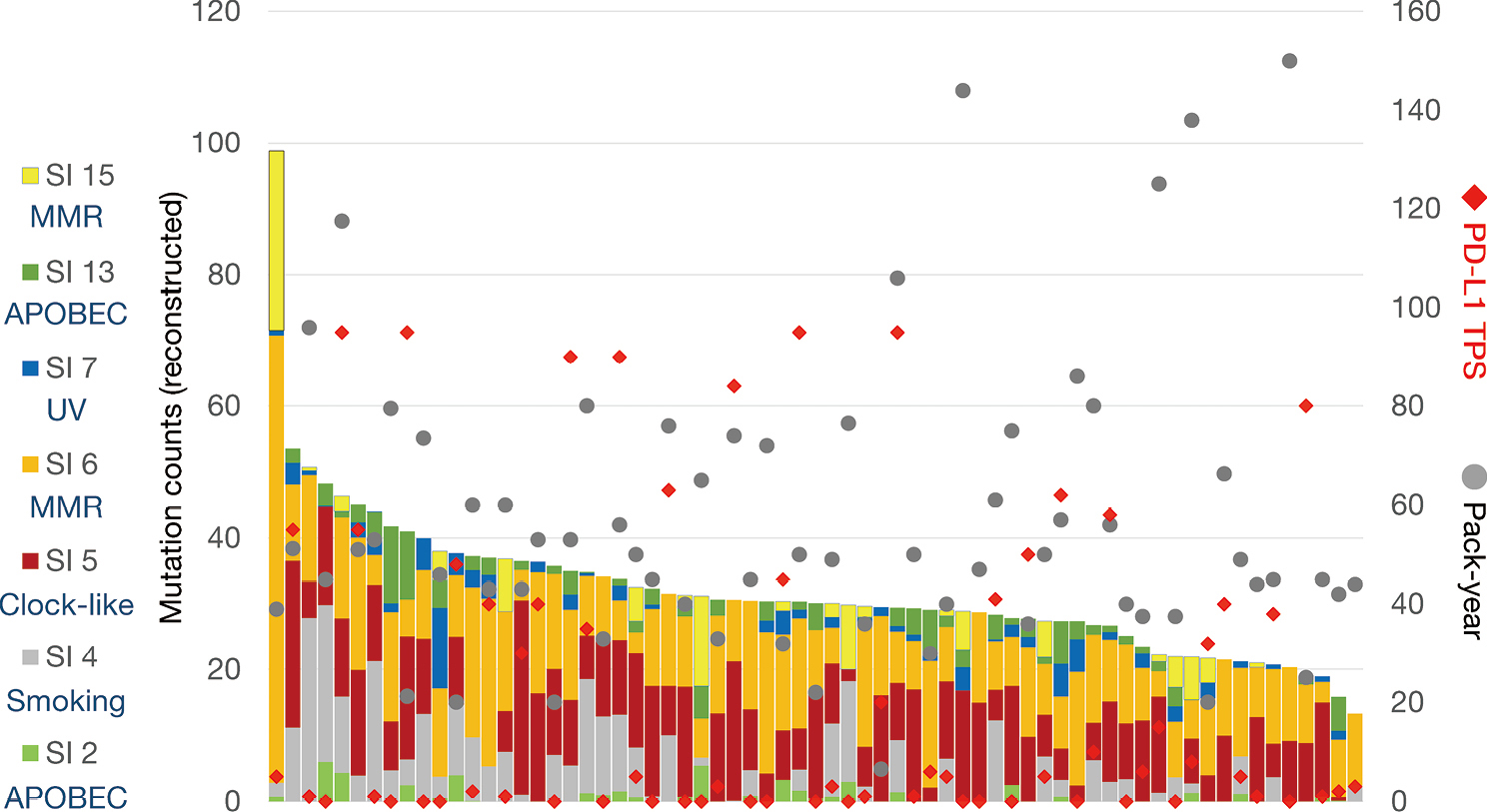 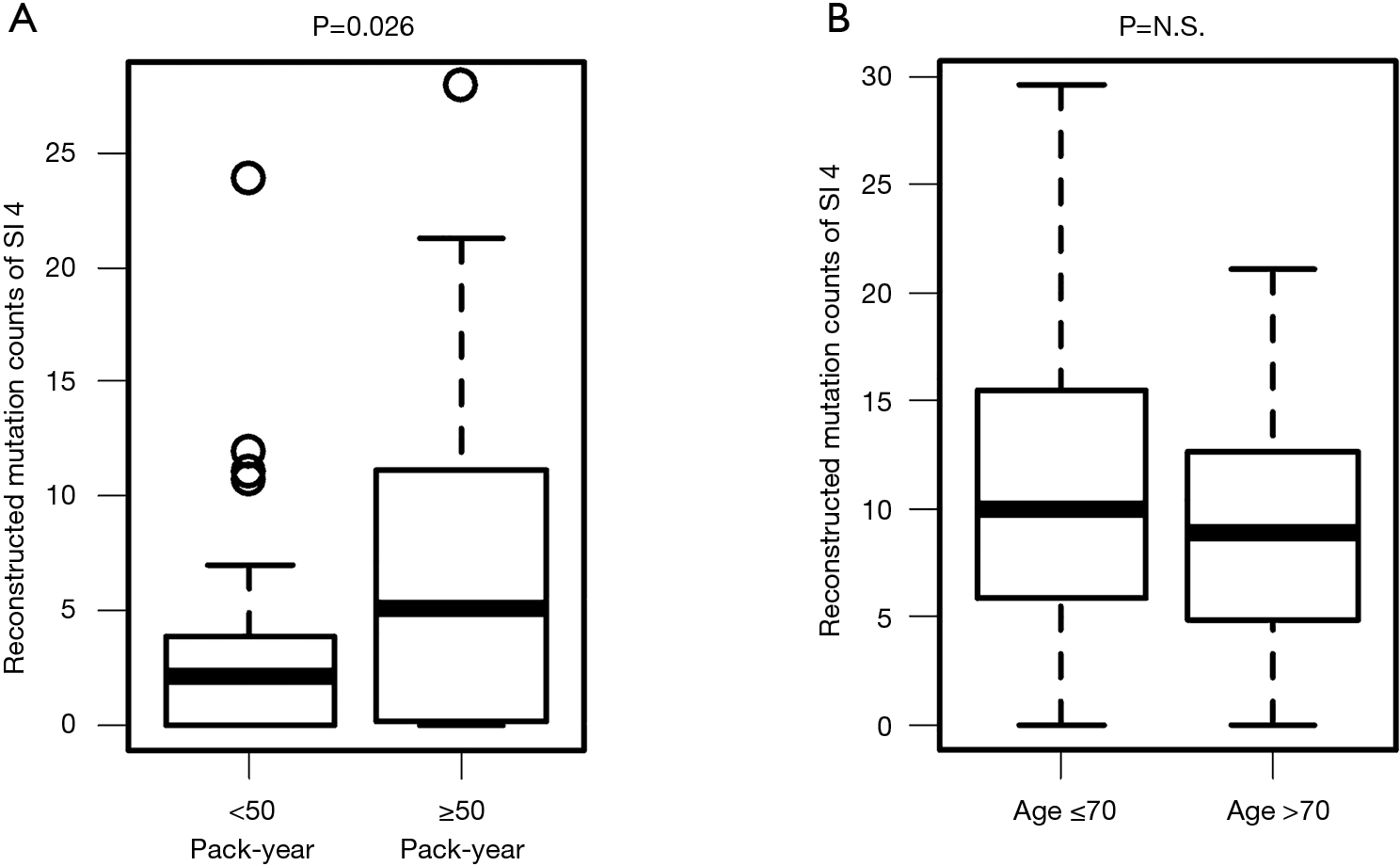 Figure 2 Relationships between signatures and patient background. Smoking-related SI4 was related with PYI (P=0.026, A), whereas clock-like SI5 was not related with age (B). PYI, pack-year index; SI, signature. 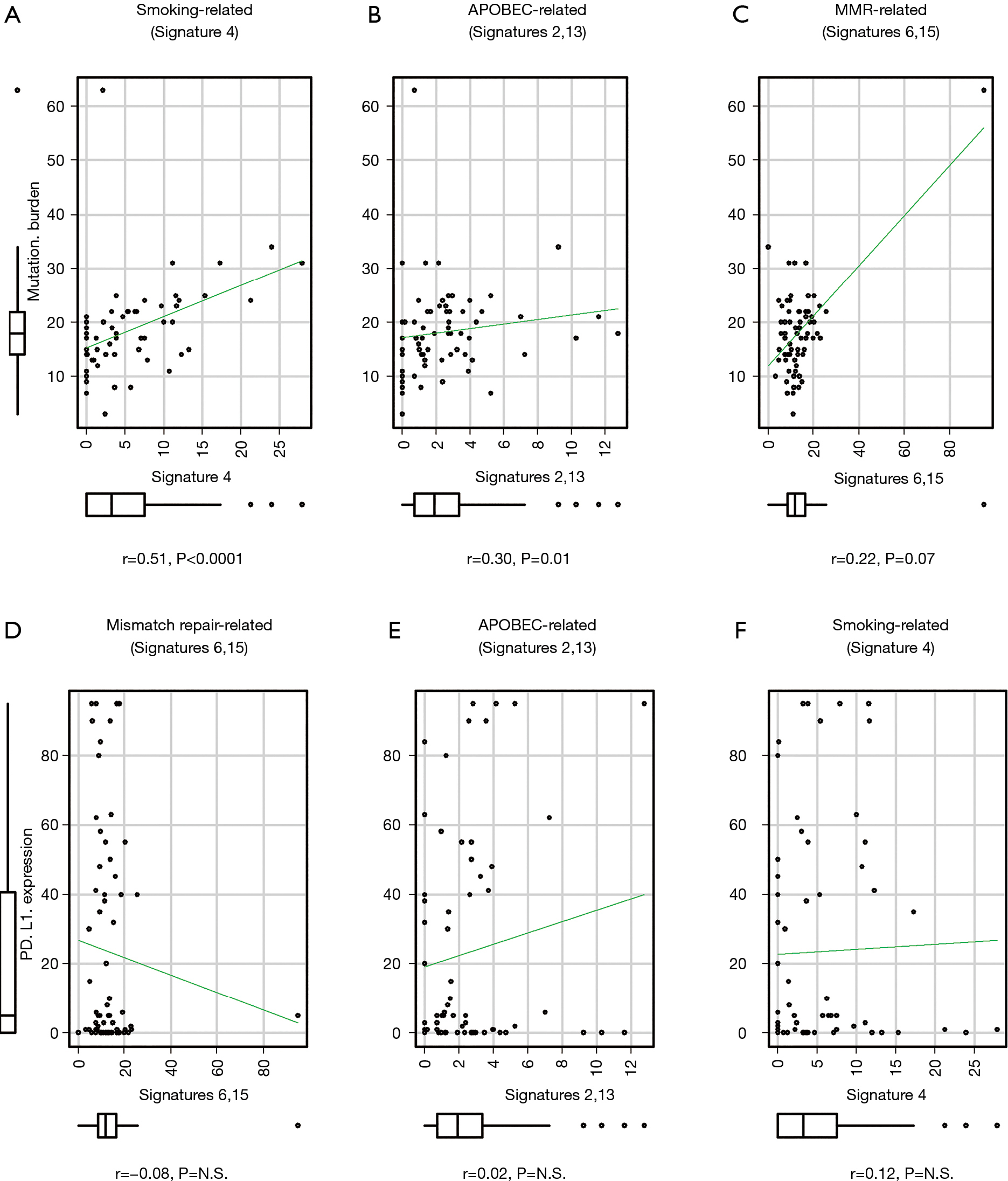 Figure 3 Reconstructed total mutation count and reconstructed signature count of each signature were plotted. The mutation counts of SI2 and SI13 (APOBEC-related) were integrated as well as those of SI6 and SI15 (MMR-related) because of the hieratical similarities of each signature. Smoking-related SI4 was most correlated with total mutation count, with a correlation coefficient of 0.51 (P<0.0001; A). Both SI2/13 and SI6/15 had trends in positive correlations with total mutation count (P=0.07 and 0.01, respectively), but the correlation was weak (correlation coefficient =0.22 and 0.30, respectively; B,C). No signature was related with PD-L1 expression in the tumor (D-F). SI, signature; APOBEC, apolipoprotein B mRNA editing enzyme, catalytic polypeptide-like; MMR, mismatch repair; PD-L1, programmed death-ligand 1.

Lung squamous cell carcinomas, especially those in patients with a smoking history, develop by the accumulation of multiple mutations including in TP53 (14,15). Many studies have shown that tobacco-related mutagens like benzo(a)pyrene cause G:C to T:A transversions by forming DNA adducts in the lung (16-18).

In this study, we referred to mutational signatures version 2, which revealed 30 distinct signatures based on an analysis of 10,952 exomes and 1,048 whole genomes across 40 distinct types of human cancer (19). The recently updated mutational signatures version 3, extracted from the 2,780 whole-genome variant calls produced by the ICGC/TCGA Pan Cancer Analysis of Whole Genomes Network, also described the signature derived from tobacco smoking as SBS4, which shows an identical pattern to SI4 in version 2 (20).

Deciphering mutational signatures from targeted sequencing is challenging, because the target region is narrow compared with whole exome sequencing (WES) or whole genome sequencing and the base triplet distribution of a target region could be different from what is available in whole genome sequencing. In fact, the percentages of SI4 in our samples were relatively low compared with the previous report (6), although estimated mutation counts belonging to SI4 did correlate with PYI. This implies that it is difficult to rank or compare mutational signatures that are reconstructed from targeted sequencing data within a single sample. As the techniques and cost of next-generation sequencing are rapidly improving, this issue will be resolved when whole exome (or whole genome) sequencing becomes more available for clinical use.

Most patients had more than four signatures within each tumor. Our results indicated that SI4 was most related with total mutation count, but other signatures also contributed to total mutation count. Tobacco mutagen is reported to induce mutations in TP53, which results in many other genomic alterations, causing cancer initiation and progression (15). Yoshino et al. reported no survival difference in patients with lung squamous cell carcinoma divided according to PYI (0, 1–20, 20–50 and 50+), whereas a significant difference in survival was observed in patients with lung adenocarcinoma divided according to PYI (21). When we compared estimated mutation counts belonging to SI4, patients with PYI more than 50 had more SI4 counts than patients with PYI 50 or below, suggesting that tobacco mutagen may continue to influence total mutation count even after a tumor has been established.

We detected some unique features by comparing signatures between samples. The patient with the highest mutation counts may likely have microsatellite instability, whereas no mutations were found in MMR enzymes. Another patient with a history of occupational exposure to UV had predominant SI7. Occupational exposure to UV is a risk for skin malignancy, but not for lung malignancy; there could have been an occult skin malignancy in that patient. Similarly, APOBEC mutagenesis has been related to human papillomavirus-associated carcinomas. However, it is difficult to distinguish whether the lung tumor is primary or metastatic, because previous studies did not distinguish between HPV-positive and -negative tumors (22).

We thank Gabrielle White Wolf, PhD, from Edanz Group (https://en-author-services.edanzgroup.com/ac) for editing a draft of this manuscript.

Funding: This work was supported by funding from Denka Co., Ltd.

Reporting Checklist: The authors have completed the MDAR reporting checklist. Available at http://dx.doi.org/10.21037/jtd-20-2602

Conflicts of Interest: All authors have completed the ICMJE uniform disclosure form (available at http://dx.doi.org/10.21037/jtd-20-2602). The authors have no conflicts of interest to declare.

Ethical Statement: The authors are accountable for all aspects of the work in ensuring that questions related to the accuracy or integrity of any part of the work are appropriately investigated and resolved. This study was approved by the Institutional Review Boards of both the Department of Surgery and Science, Graduate School of Medical Sciences, Kyushu University Hospital (IRB number: 674-01) and the Division of Thoracic and Cardiovascular Surgery, Niigata University Hospital (IRB number: 774). Written informed consent was obtained from all participants. The study was conducted in accordance with the Declaration of Helsinki (as revised in 2013).