The eighth edition of the tumor, node, metastasis (TNM) classification of lung cancer, revised in 2017, defines the pathological findings of “invasion” in the pathological diagnosis of lung adenocarcinoma and terms adenocarcinoma in situ (AIS) as minimally invasive adenocarcinoma (MIA) (1). In addition, the invasion diameter (tumor diameter excluding the lepidic growth region) was adopted as the pT factor, and the classification based on pT reflected the prognosis (degree of invasion/progression). Meanwhile, in computed tomography imaging-based diagnosis, the consolidation (nodule) diameter, excluding the regions showing ground glass opacity (GGO), was defined as cT, and the classification based on cT reflected the pathological invasion diameter. Thus, the revised classification more accurately reflects the degree of progression and prognosis of lung adenocarcinoma both diagnostically and pathologically than the previous one. In this paper, we review the circumstances leading up to this revision and discuss further issues.

We present the following article in accordance with the narrative Review Reporting Checklist (available at http://dx.doi.org/10.21037/jtd-20-844).

Tumor category based on tumor diameter

In general, the progression of a solid tumor is considered to be correlated to its size, and size is of utmost importance in local progress, irrespective of tumor type. In cases of lung adenocarcinoma, the tumor (T) factor was defined using overall tumor diameter until the revision in 2017. Compared to squamous cell lung carcinoma, a type of non-small cell lung cancer, the T factor is diversified from early clinical stage to advanced cancer, and terminal stage cancer shows mixed findings, i.e., even for the same tumor sizes, the prognosis and degree of progression are heterogeneous, which is a problem with T factor-based classification.

Prognostic factors other than tumor size

Lung adenocarcinoma is characterized by scars (fibrotic foci) at its center, so in the past, the cancer was thought to originate from the scars and was also called “scar cancer”. On the other hand, in 1980, Shimosato et al. (2) conducted a detailed examination of small cell lung adenocarcinoma and found that fibrous scars in the center of the adenocarcinoma were changes resulting from tumor invasion, and were strongly related to the degree of invasion and prognosis. It was the first time when the fibrous scar at the center of the adenocarcinoma was considered a finding of tumor invasion. At the same time, a new concept was proposed: the size of fibrous scars and nature of fibrosis (the extent of collagen fibrosis/degree of fibrosis) are more strongly related to the degree of invasion (lymph node metastasis) and prognosis than tumor diameter. Later, the accuracy of this concept was confirmed, leading to the pathological definition of “invasion” today. Next, in 1995, Noguchi (from the same group as Shimosato et al.) reported a new surgical pathological (morphological) prognostic factor for small adenocarcinoma (3). There are two types of lung adenocarcinomas: In one type, the tumor cells proliferate to replace the normal epithelium along the alveolar septum, and in the other, existing alveolar structures proliferate in a depressing and destructive manner. We reported the findings of a group with very good prognosis that could indicate in situ cancer (3). The results also show that the type that progresses to alveolar epithelial replacement has a better prognosis than the non-replacement type of small cell adenocarcinoma (2 cm or less).

Therefore, the pathological (morphological) findings of lung adenocarcinoma leading to this revision mainly began with these two reports. Currently, the degree of invasion and progression of adenocarcinoma can be summarized as follows from the surgical-pathological findings:

Delay in application to surgical practice

Limited surgery is usually indicated for lung peripheral cancers that are adenocarcinomas. The results of limited surgery (segmental resection) and lobectomy carried out in the last 20 years for clinical early lung cancer vary considerably, and it remains unclear whether reduced surgery is inferior to standard surgery (8). The possible causes of the variation in the results are as follows: (I) Technical problems in surgery (e.g., dissection accuracy, surgical procedure) and (II) problems of indication for limited surgery. Until recently, limited surgery was indicated on the basis of preoperative imaging findings in cases with no lymphadenopathy and with tumor diameter (2–3 cm or less); the pathological findings such as scars and growth forms were not taken into account.

When adenocarcinoma is classified based on tumor size alone, there is a heterogeneous group of patients with significantly different degrees of progression and biological grade, even if the tumor size is less than a few centimeters. The degree of heterogeneity existing there strongly influences the prognosis after resection.

The cT category reflecting the abovementioned pathological features was finally proposed in the eighth edition (9). In the cT category, the pathological invasive diameter is recognized as the consolidation diameter based on lung field conditions in CT imaging, and it is a classification that reflects tumor progression and malignancy more than the previous classification based on simple lung field conditions. However, there are many issues that need to be resolved. We have been studying the relationship between pathological invasiveness, malignancy, and diagnostic imaging independently for some time (5,7,10-14).

In clinical early lung adenocarcinoma (cIA), the presence of lepidic proliferation is an important prognostic factor when using pathological classification (5,7,10-12). This can be distinguished by whether or not GGO (ground glass shading) is included at a certain rate in the lung field conditions of CT (5,7,10-12). Poor prognosis is observed for adenocarcinomas with a tumor diameter of 3 cm or less and no lymph node enlargement (cIA or adenocarcinoma of 2 cm or less), with high carcinoembryonic antigen (CEA) values and nodule type tumor (a type that contains negligible GGO) (5,7,10-12).

In the CT image, the pathologically diagnosed area as a scar/invasive area is reflected as a nodular shadow other than GGO. It is not yet known under what conditions (window level/window width) the area that is imaged best reflects the grade or degree of invasion of the tumor (7,10-12). The eighth edition only defines consolidation under lung field conditions (a certain range of conditions) (1,9). We have been investigating effective methods for measuring nodule diameter in CT imaging, considering the relationship between pathological infiltration diameter, prognosis, lymph node metastasis, and vascular and pleural infiltration (13-16). According to the definition of the eighth edition, in the case of a shadow containing GGO, the nodule diameter in the lung field conditions excluding GGO is regarded as the tumor diameter (16). However, in the measurement of tumor diameter by this method, the boundary between GGO and consolidation (CD) is often unclear, and there is a concern that the variability due to differences between subjects (subjectivity) may increase. On the other hand, we have reported that the tumor diameter in the mediastinum condition (MD) has a clear border from the surroundings, has little variation in size measurement, and is useful for measuring the prognosis and progression of adenocarcinomas (13-16).

Our study shows that MD has a stronger correlation with pathological invasion diameter than CD (correlation coefficient 0.743 vs. 0.710, respectively) (16). In addition, MD was a more useful index than CD in predicting vascular/pleural infiltration and lymph node metastasis. Regarding the types containing GGO in the periphery, the possibility of lymph node metastasis is extremely low if the mediastinal tumor diameter is less than 10 mm (0/52), and if vascular infiltration is 5 mm or less. Pleural infiltration was also unlikely (0/25) (15). We further reported that MD is less susceptible than CD to background elements other than tumors, such as respiratory function, emphysema, fibrosis, and smoking (Japanese Lung Cancer Society General Assembly, 2018). Representative CT images and pathological images were presented (Figure 1) (16). 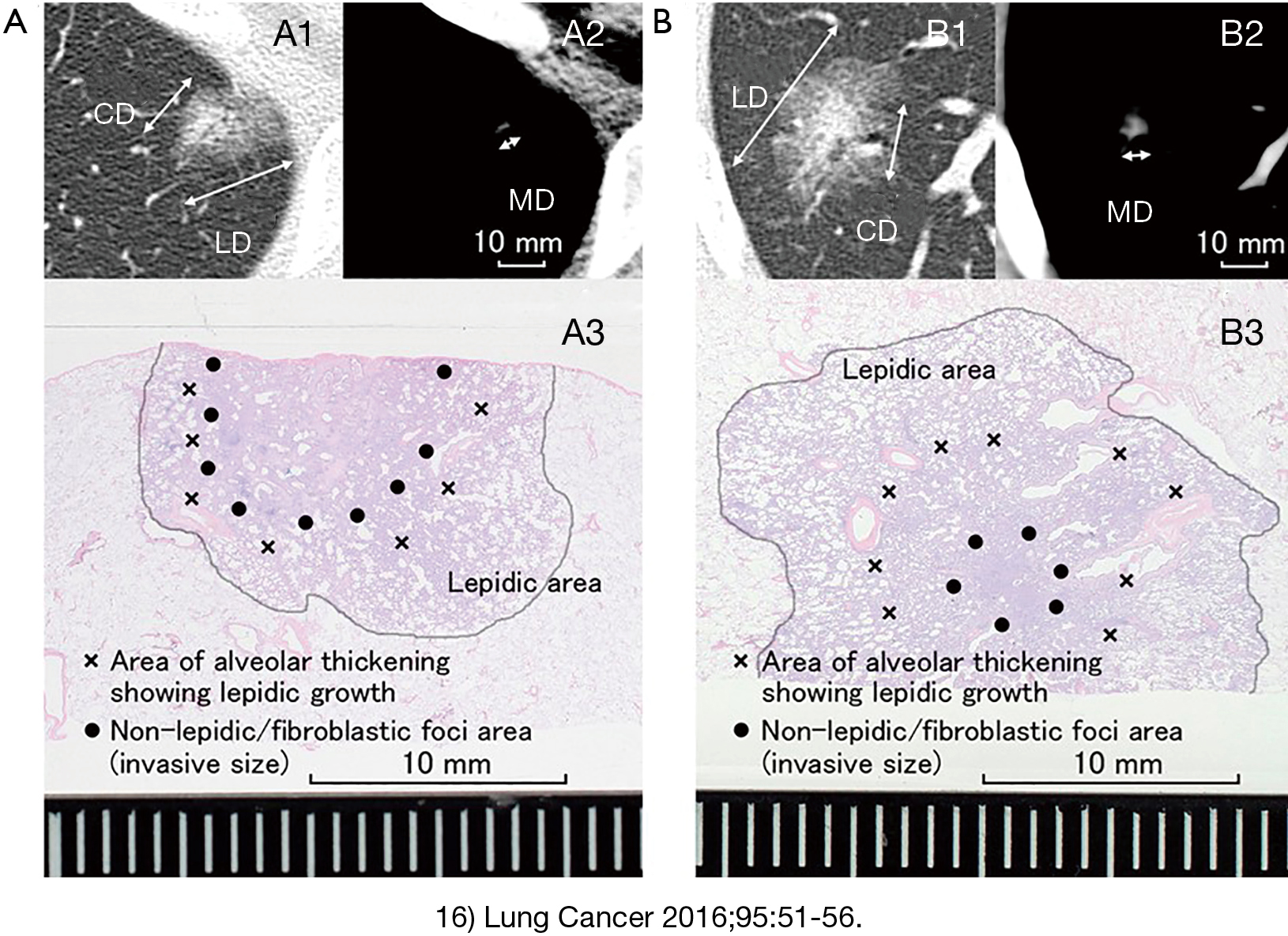 Application of CT number for detection of early adenocarcinoma

A group of patients diagnosed with pathological AIS/MIA has been referred for aggressive limited surgery. It is important to determine how to extract AIS/MIA using preoperative imaging findings. We evaluated the consistency between cT based on the TNM eighth edition and pT in 368 cases of lung adenocarcinoma (tumor diameter 3 cm or less) resected at the Aichi Cancer Center from 2013 to March 2016. The frequency of invasive cancer was 14.3% in cTis (20cases) and 50.1% in cT1mi (79 cases). Thus, it is considered that it is difficult to accurately exclude invasive cancer preoperatively only by cT classification (eighth edition classification).

Receiver Operating Characteristic (ROC) analysis of the detectability of MIA/AIS with an infiltration diameter of 5 mm or less for CD and MD in this group showed AUC values of 0.62 and 0.64, respectively, which are insufficient values for detection markers. On using SYNAPSE VINCENT (FUJIFILM Co., JAPAN) to calculate the average CT number per unit volume of tumor, the AUC increased to 0.77. In addition, it was suggested that invasive cancer could be extracted more efficiently by using a specific CT number (cutoff). For more accurate detection of very early stage cancer (AIS/MIA), not only MD and CD but also CT values are useful (17).

FDG-PET findings have been used as indicators of tumor growth potential and malignancy (18). We believe that a combination of PET, MD, CD, mediastinal tumor volume (MV), and consolidation tumor volume (CV) can improve the accuracy of predictions of the degree of invasion (vascular invasion/pleural invasion) and lymph node metastasis. Especially for FDG-PET standardized uptake value (SUV), we examined the maximum tumor diameter in two dimensions and the SUV per unit tumor volume under various conditions (19).

The average FDG-PET SUV per unit tumor volume under mediastinal window setting (mean/MV) is the most effective indicator of vascular/pleural invasion and lymph node metastasis, and was more useful than pathological invasion diameter. On using FDG-PET SUV, high AUC values were obtained. This means that imaging diagnostics (CT, etc.) can be performed with slice thicknesses of 1 mm or less, as opposed to pathological studies that require samples of 5 mm thickness due to sample preparation limitations.

Diagnostic imaging indicated that the average SUV value per unit tumor volume under MD was the most useful value. However, in the comparison of AUC, mean/MWV was 0.82, 0.84 for vascular invasion/pleural infiltration and lymph node metastasis, 0.80, 0.82 for MV, and 0.78, 0.81 for CV, respectively. There was only a small increase in accuracy using FDG-PET. The improvement in diagnostic accuracy of tumor invasion using FDG-PET was modest. On comparing between the maximal cleavage plane and tumor volume, the AUC values of MD/MV and CD/CV was found to be 0.1 and 0.2 for vascular invasion/pleural invasion and lymph node metastasis, respectively. Considering the simplicity of the measurement, it was suggested that two-dimensional analysis (maximum split-face tumor diameter) is sufficient.

Predicting the degree of “true pathological invasion/progression” by preoperative diagnosis is an important issue when selecting a treatment method and surgical procedure. With the revision of the eighth edition, it is certain that the difference between cT and pT has been reduced in lung adenocarcinoma cases. However, in early-stage lung cancer, the divergence between the two is still a major issue. We propose that the use of tumor size in the MD condition can more accurately reflect postoperative pathological findings (for factors related to progression) in preoperative diagnosis.

However, this method is inadequate for preoperative diagnosis of MIA and AIS. In such cases, the use of CT imaging values may improve the accuracy. PET findings can also predict the risk of lymph node metastasis more accurately than CT findings. In the future, more accurate data analysis will be possible with the uses of artificial intelligence. Further research in this area is challenging yet necessary, as data cues are key to improved patient outcomes.

Special thanks to Dr. Hitoshi Dejima and Dr. Katsutoshi Seto for their cooperation.

Conflicts of Interest: All authors have completed the ICMJE uniform disclosure form (available at http://dx.doi.org/10.21037/jtd-20-844). The authors have no conflicts of interest to declare.