Acute dissection of the ascending aorta is a lethal disease that requires prompt diagnosis and surgical intervention (1). It is the most common and disastrous event to affect the aorta. The dissection of the thoracic aorta occurs nearly 3 times as frequently as rupture of the abdominal aortic aneurysms in the United States (2). The annual incidences for acute aortic dissection are by comparison low: 440 per 100,000 for acute coronary syndrome, 69 per 100,000 for pulmonary embolism, and 3 to 4 per 100,000 for acute aortic dissection (3,4). The location of the aortic tear determines the surgical approach and the timing of intervention. One of the critical aspects of type A dissections is establishing cardiopulmonary bypass for replacement of the ascending aorta. Arterial cannulation is essential and the anatomical location has important implications. Femoral arterial cannulation initially was the standard for arterial cannulation and had been established for cardiopulmonary bypass since the 1950’s (5). The risks associated with its use however includes distal re-entry, distal embolization because of retrograde perfusion to the brain, and malperfusion syndrome. One of the most feared complications of acute aortic dissection is end-organ malperfusion and there is an incidence of it as high as 28% to 31% (6,7). Malperfusion is defined as diminished blood flow to the arterial bed of a vital organ. A malperfusion syndrome is when this diminished flow results in ischemia and subsequent impairment of function (malperfusion syndrome). This can present physically as abdominal pain due to visceral ischemia or physiologically (neurologic changes related to stroke) (8).

Over the last 2 decades, there was a shift towards alternative access sites for arterial cannulation for repair of type A aortic dissections. Initially the axillary artery became the primary alternative cannulation site. The Cleveland clinic was instrumental in its use for cannulation with their original publication in 1995 (9). The benefit of the alternative access site is that it provides antegrade cerebral perfusion to reduce the risk of stroke and embolization. The common issue with both peripheral arterial cannulation sites are that they both require an additional incision that maybe time-consuming depending on the patient’s anatomy. Of late, central aortic cannulation has become more popular either with direct cannulation of the ascending aorta or through the innominate artery. The advantages of the more direct approach include the single incision for repairing the dissection, antegrade cerebral perfusion, and prevention of distal embolization.

The concern for malperfusion syndrome is one of the key factors that has initiated a national trend away from femoral cannulation to axillary artery and direct ascending aortic cannulation. The purpose of this study was to report a single center experience with femoral artery cannulation for the repair of a type A dissection. Regardless of the alternate cannulation sites, an analysis of the traditional femoral arterial cannulation site is important to assess how it compares to the different options. We present the following article in accordance with the STROBE reporting checklist (available at http://dx.doi.org/10.21037/jtd-20-2549).

A retrospective study was performed on 52 consecutive patients who underwent surgical repair for a type A aortic dissection between January 1st, 2012 and June 30th, 2019 at a single institution. An analysis from the International Registry of Acute Aortic Dissections (IRAD) reported a mean age at presentation of 63 years and a male predominance of 61%, yielding an incidence of 16 per 100,000 in men (10,11). Similar to the IRAD data, the majority of the patients in the study were male (N=34, 65%) and the mean age was 66±12 (Table 1). The cardiothoracic surgeon’s decision on the best arterial cannulation site is critical. Of the 52 patients analyzed, 35 (67.3%) underwent femoral artery, 11 (21.2%) direct ascending aortic, and 6 (11%) axillary artery cannulation for arterial access. The entire patient group had central cannulation of the right atrium for venous access. All of the procedures were performed in the operative theater at a single academic institution. Deep hypothermic circulatory arrest and unilateral antegrade cerebral perfusion were used in all the patients. The rates of postoperative complication, mortality, and demographic data were reported. This study was conducted in accordance with the Declaration of Helsinki (as revised in 2013). The study was approved by the institutional review board and ethics committee (No: 2020000011). Individual consent for this retrospective analysis was waived. 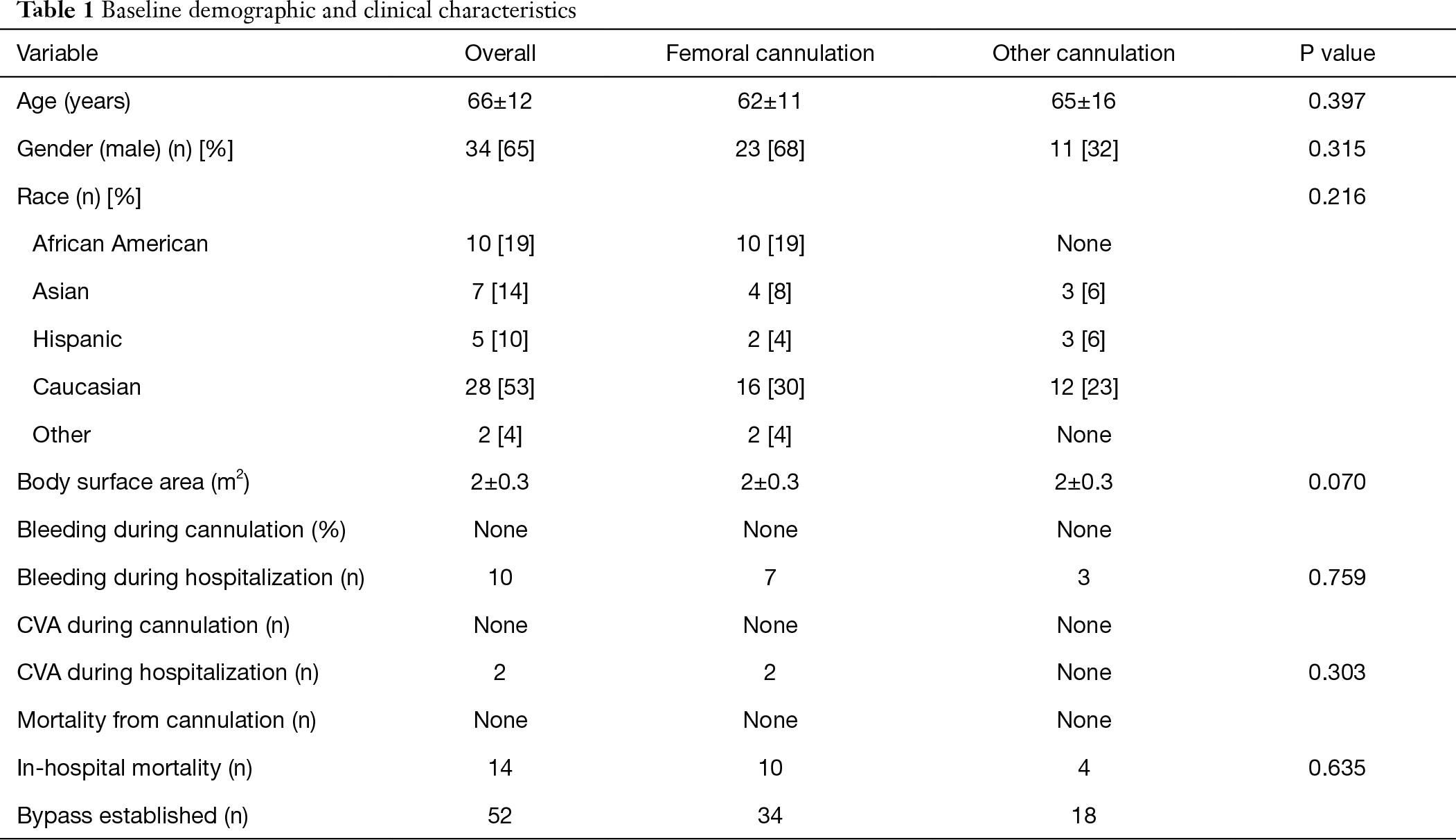 The critical aspects of repair of ascending aortic dissection involves first starting cardiopulmonary bypass to prevent further aortic rupture. Successful arterial and venous cannulation are crucial towards the re-establishment of arterial flow through the true lumen of the aorta for repair. In this study, cardiopulmonary bypass was established in 100% of the patients that had femoral arterial cannulation. The femoral artery was accessed by cut down to the artery followed by cannulation using Seldinger technique under transesophageal echocardiogram (TEE) guidance. A wire in the true lumen of the aorta was confirmed by TEE prior to placement of the arterial cannula.

There were no complications specifically related to femoral arterial cannulation nor the axillary or direct aortic approach. The cannulation of the femoral artery had no episodes of malperfusion syndrome, bleeding, or injury. Similarly, there no issues related to directly cannulating the axillary artery, or central ascending aorta. The bleeding rates for the patients were higher in cases that proceeded with a femoral (13%) versus alternate (6%) approach however, neither of the bleeding was related to the cannulation site (Figure 1). The mortality and bleeding rates for all the patients undergoing repair of the type A dissection repairs were 27% (14/52) and 19% (10/52), respectively. These findings reinforce the severity of the disease process of aortic dissections. 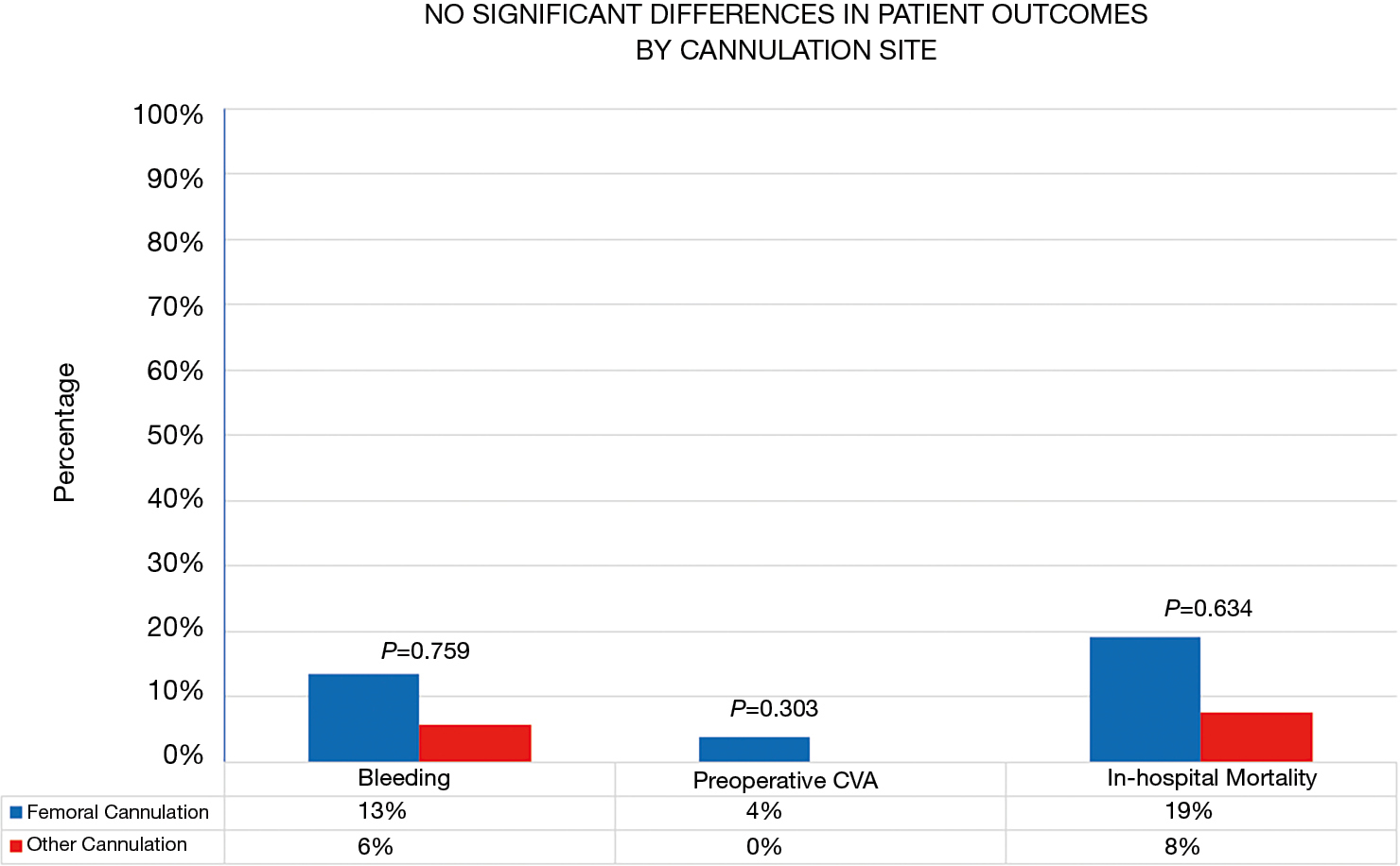 The primary benefits to the femoral artery are that it is easily accessible, and no graft anastomosis is required which allows for prompt cannulation. An additional advantage is that is allows for initiating cardiopulmonary bypass prior to making the sternotomy or even cooling the patient for circulatory arrest. Furthermore, the presence of bilateral femoral arteries allows for 2 potential arteries to cannulate. Often if there is an issue with 1 femoral artery, either calcification or just difficult to access then the contralateral femoral artery can be cannulated. Moreover, most clinicians feel comfortable with accessing the femoral arteries with the use of ultrasound. This is in contrast to the axillary artery which are not typically accessed with ultrasound. The inherent disadvantages however, include the risk of Malperfusion, retrograde flow to the brain, and potential injury to the artery distally leading to vascular compromise to the lower extremity. Another potential problem is embolization of plaque to the brain. The shift away from the femoral artery was to identify another artery that can provide antegrade flow to all the major organs and prevent malperfusion, as well as decrease risk of embolization to the brain. As previously mentioned, the alternative options include the axillary artery, innominate artery, and direct ascending aorta.

The highest mortality from aortic dissection occurs in the ﬁrst 48 hours after symptom onset; therefore, immediate diagnosis and treatment is lifesaving. Operative 30-day mortality for ascending aortic dissections at experienced centers (involving selective cerebral vessel perfusion) is between 10% and 35% (12,13). The wide range in mortality demonstrates that multiple factors can affect outcome. One crucial aspect is successfully establishing cardiopulmonary bypass with proper arterial and venous cannulation. Unfortunately, at this time, the optimal cannulation site for repair of Type A Aortic dissection remains controversial (14,15). A consensus concerning the most optimal cannulation strategy for patients with this emergency condition is still lacking (16,17). The ideal cannulation strategy for aortic dissection is quick to establish, minimizes any organ Malperfusion, prevents progression of the dissection flap, and allows optimal brain protection (18).

Despite the findings of the study there are limitations that require consideration when reviewing the data. First, as a retrospective study there are inherent potential limitations such as bias that could occur. In order to prevent this, all data was analyzed by 1 cardiothoracic surgeon but also by an independent non-cardiothoracic surgeon to confirm the accuracy of the data. Secondly, although the sample size is adequate a larger sample size of over a 100 patients would be ideal. Aortic dissections are rare surgical emergencies and therefore obtaining a larger sample size is challenging. Although there are potential constraints, the findings of the study are valid and should be able to educate cardiothoracic surgeons.

Reporting Checklist: The authors have completed the STROBE reporting checklist. Available at http://dx.doi.org/10.21037/jtd-20-2549

Conflicts of Interest: All authors have completed the ICMJE uniform disclosure form (available at http://dx.doi.org/10.21037/jtd-20-2549). The authors have no conflicts of interest to declare.

Ethical Statement: The authors are accountable for all aspects of the work in ensuring that questions related to the accuracy or integrity of any part of the work are appropriately investigated and resolved. This study was conducted in accordance with the Declaration of Helsinki (as revised in 2013). The study was approved by the institutional review board and ethics committee (No: 2020000011). Individual consent for this retrospective analysis was waived.