Congenital left ventricular diverticulum (LVD) is a rare cardiac malformation that is caused by the reduction or deletion of local myocardial tissue or the replacement of normal myocardial tissue by fibrous tissue, resulting in abnormal bulging of myocardial tissues under high left ventricular pressure. The prevalence rate of congenital LVD is less than 0.1% of the congenital heart diseases requiring surgery (1). However, it has been reported that three cases of isolated LVD were found in a group of 750 patients after sudden cardiac death (0.4%) (2). It is currently believed that it occurs as a result of impaired development of the endocardial tube during the 4th week of embryologic development. Some scholars suggest that all left ventricular diverticula should be actively removed to prevent possible risks, such as diverticulum rupture, arterial embolism, and malignant arrhythmia. However, other scholars believe that asymptomatic LVD can be followed-up without immediate surgery. Considering its low incidence rate, it is difficult to perform large-scale data analytics on cases of congenital LVD. In order to provide clinical experience and a reference for the treatment of such cases, the data of four congenital LVD patients found in our hospital from the past decade are described in the present study.

We present the following article in accordance with the AME Case Series reporting checklist (available at http://dx.doi.org/10.21037/jtd-20-3510).

A retrospective study was conducted on a total of four patients who received LVD resection surgery (aged 3, 21, 22, and 32 years) in our hospital from September 2009 to July 2019. This study was conducted in accordance with the Declaration of Helsinki (as revised in 2013). The study was approved by the Institutional Ethics Committee of the First Medical Center of PLA General Hospital. Informed consent was obtained from all patients, and all personal data have been protected and secured according to current national and international laws.

All patients were diagnosed as LVD by echocardiography, cardiac computed tomography (CT) enhanced scan, and magnetic resonance imaging (MRI) prior to surgery. The patients also had complete data of the left ventricular morphology, cardiac function, and heart rhythm examined by enhanced cardiac CT, echocardiogram, and electrocardiogram during the postoperative follow-up period.

Descriptive statistics was used to describe the cases. 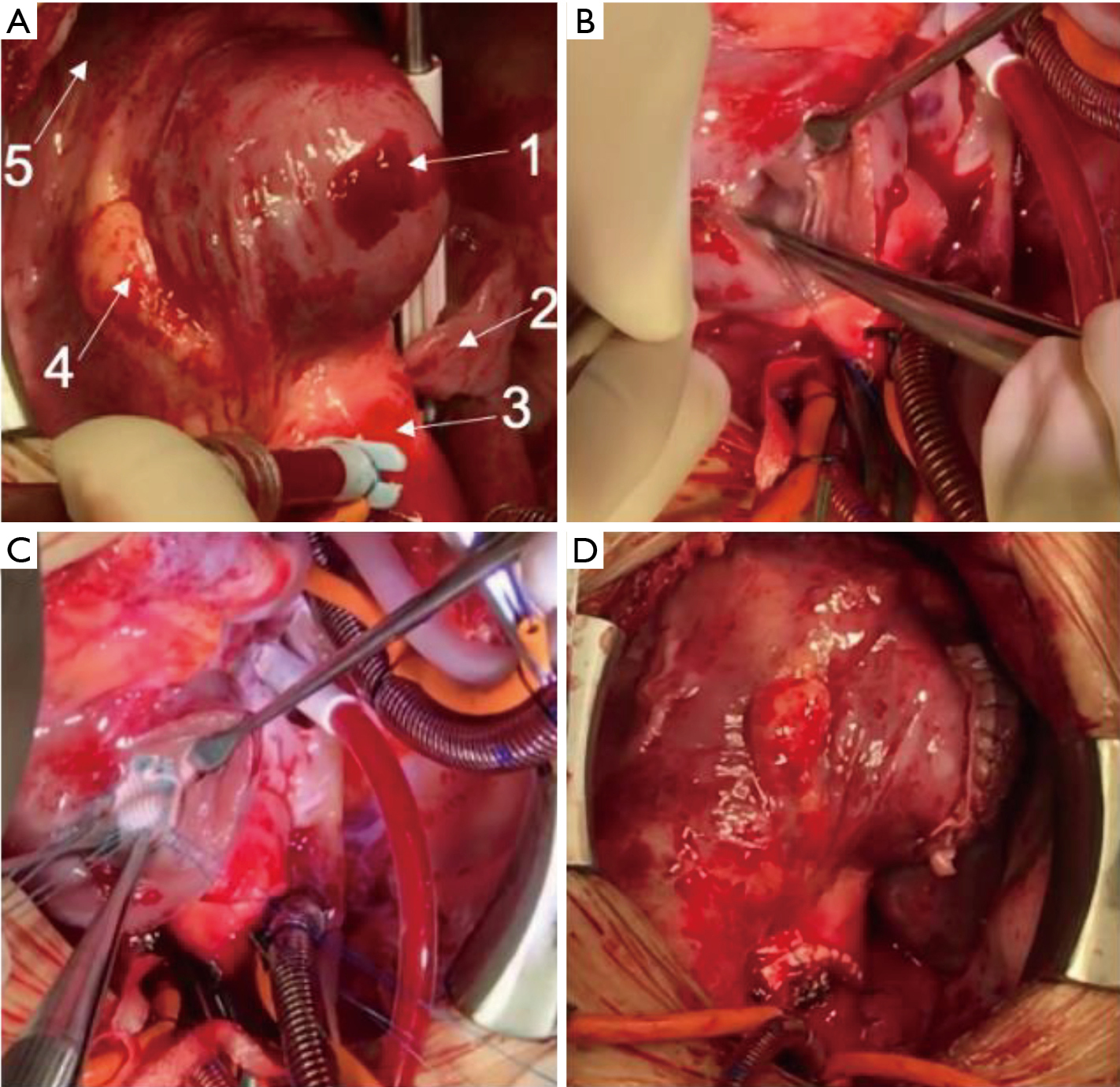 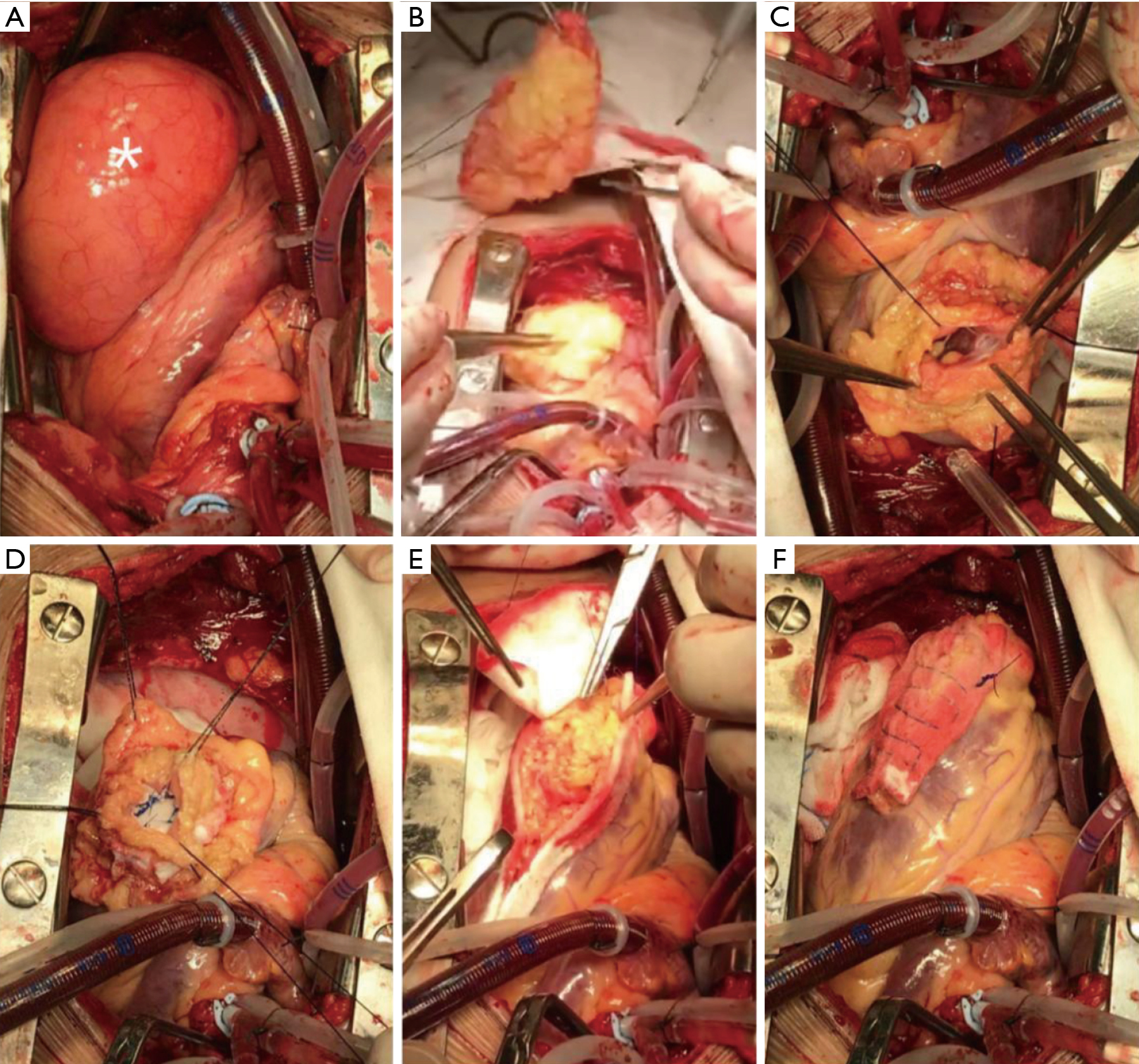 A 22-year-old female patient was admitted to the hospital due to “enlargement of the heart for 5 years and chest tightness for 1 month”. Echocardiography showed a solid mass in the pericardial cavity in front of the left ventricle. The mass cavity communicated with the left ventricular apex through a 3-cm wide opening. Doppler flow imaging showed that the liquid in the mass was blood. The LVD was confirmed by CT angiography (CTA). The LVD was resected under cardiopulmonary bypass. Histopathological examination showed that the sample sent for examination was myocardial tissue and some myocytes were granular and exhibited vacuolar degeneration. After the operation, the echocardiographic structure and function of the heart were normal. The patient recovered and was discharged.

A 32-year-old female was hospitalized with “repeated palpitations for half a year”. 24-hour Holter monitoring showed sinus rhythm with frequent ventricular premature (ventricular rhythm accounted for 7.2%). Echocardiography showed that there was a 3 cm × 3 cm limited bluge in the left ventricular apex. The wall of the bluge had synchronous motion with the left ventricular contraction. Enhanced cardiac CT conformed LVD and it was resected under cardiopulmonary bypass (refer to case 2 for surgical procedures). After the surgery, the echocardiographic structure and function were normal (Figure 6) and the ECG showed sinus rhythm without ventricular arrhythmia. The patient recovered and was discharged. 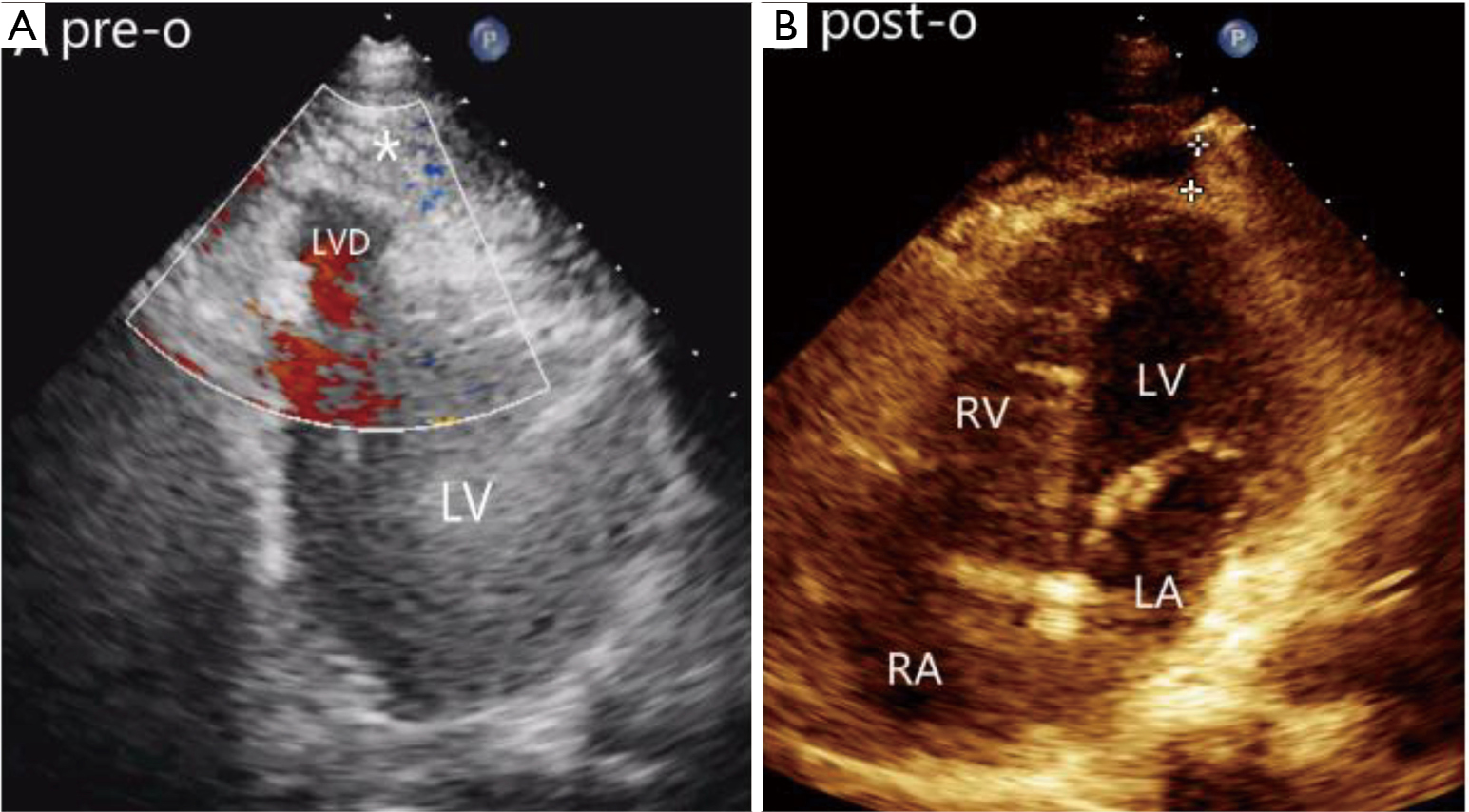 All four patients were reexamined at 3 months, 6 months, 1 year, and 2 years in postoperative follow-ups, respectively, and the follow-up rate was 100%. The longest follow-up time was 11 years. During the follow-up period, there were no thromboembolic events. ECG showed no arrhythmia. Enhanced cardiac CT showed normal morphology and structure. And there were no hospital readmissions due to cardiac complications, and no other adverse events. During the follow-up, the ECG of Case 1 showed an incomplete right bundle branch block, however no diverticulum was found in echocardiography and enhanced cardiac CT, and the patient had normal left ventricle shape and function.

Since O’Bryan (3) first described the LVD as a rare cardiac malformation in 1838, there have been only few reports on LVD, and most of them are found in neonates and children. However, LVDs have also been found in different age groups (4). Since 2009, four cases of LVD (including one child and three adults) have been diagnosed and successfully treated in the Department of Cardiovascular Surgery of the PLA General Hospital. For this kind of rare disease, we completely recorded the image data of two patients with LVD before surgery, including left ventricular angiography, enhanced cardiac CT, and echocardiography. During the operation, we used a camera system to record the morphology of the LVD, as well as the process of resection and suture. The preserved images, including the enhanced cardiac CT and echocardiogram, are an important reference and theoretical basis, and have significance value for the clinical analysis of LVD.

At present, malformation correction combined with LVD resection at the same time has been widely recognized for LVDs with symptoms or with cardiac malformations; however, there is still no consensus on whether or not to perform surgical treatment for asymptomatic isolated LVDs (6). Some scholars believe that all LVD patients require surgical treatment in order to reduce potential risks such as left ventricular thrombosis, malignant arrhythmia, ventricular wall rupture, and massive hemorrhage caused by LVD. However, others believe that radical surgical treatment of all LVD may cause damage to the left ventricular structure due to the resection of normal left ventricular wall muscles, which can result in heart failure and even lead to death. In this study, a case of simple left ventricular muscular diverticulum was included due to the enlargement of heart shadow during regular follow-up. Consideration that this patient was young, had a long life expectancy, and low surgical risk, surgical resection was performed to avoid the risk of left ventricular thrombosis, rupture, and arrhythmia caused by LVD. Our experience combined with previous literature reports makes us believe that LVD resection with cardiac malformation correction at the same time have low surgical risk and good effect for the LVD with other cardiac malformations, which is worthy of promotion. For simple muscular LVDs accompany with symptoms, such as compression of outflow tract, ventricular wall and coronary artery, or for gradually expanding LVD, surgical treatment should be considered. Surgical treatment should be also considered for the fibrodiverticulum because it is usually located under the aortic valve or mitral valve, which affects the structure of the valve leaflets, leading to aortic and mitral valve insufficiency. In addition, because the base of the fibrodiverticulum is usually wider than that of muscular diverticulum and lacks contractile function, the fibrodiverticulum is more prone to rupture. Our recommendations are consistent with the views reported in some studies (7).

This study provides a good reference value for the study of such diseases, however the sample size of this single center retrospective study is relatively small. Thus, further studies need to be conducted to obtain more meaningful clinical results.

Congenital LVD is a rare cardiac malformation with different morphology and feature. Echocardiography, enhanced cardiac CT, and magnetic resonance imaging are effective tools for diagnosis and follow-up. For LVD with symptoms or other malformations and fibrous LVD, the risk of surgery is low and the therapeutic effect of surgery is good.

Conflicts of Interest: All authors have completed the ICMJE uniform disclosure form (available at http://dx.doi.org/10.21037/jtd-20-3510). The authors have no conflicts of interest to declare.

Ethical Statement: The authors are accountable for all aspects of the work in ensuring that questions related to the accuracy or integrity of any part of the work are appropriately investigated and resolved. This study was conducted in accordance with the Declaration of Helsinki (as revised in 2013). The study was approved by the Institutional Ethics Committee of the First Medical Center of PLA General Hospital. Informed consent was obtained from all patients, and all personal data have been protected and secured according to current national and international laws.