Essential hypertension (ETH) is a commonly encountered clinical condition worldwide (1). A 2016 study (2) published in ‘The Lancet’ showed that there were 594 million ETH patients worldwide in 1975, and this had increased to 1.1 billion in 2015. ETH is the most important risk factor for cardiovascular and cerebrovascular diseases (3) and may also be associated with functional damage to organs such as the heart and brain (3,4). Paroxysmal atrial fibrillation (PAF) is a common clinical disorder. Many small reentrant rings caused by the atrium-dominant reentrant ring cause the cardiac rhythm disorders of PAF patients (5). There is a high incidence of ETH in patients with PAF and when combined, there is an increased risk of arterial embolism, heart failure, secondary stroke complications, and death (5-7).

At present, there are few studies focusing on cardiac function in patients with ETH combined with PAF. Ultrasonography is the most used method for evaluating cardiac function and two-dimensional speckle tracking imaging (2D-STI) has been widely used in the evaluation of cardiovascular disease. As a relatively new method to evaluate cardiac function, 2D-STI not only eliminates the dependence of tissue Doppler on the angle of the sound beam but is also not interfered with by the traction of the surrounding myocardium and heart movement (8,9). However, the spatial conformation of the atria and ventricles are not a regular geometric shape (10) and the results of two-dimensional Doppler ultrasound measurement are prone to errors (11). Real-time three-dimensional (RT-3DE) ultrasound does not need to assume the geometry of the heart (12) and can display the heart space structure, movement law. And adjacent relationship as well as measuring the volume of the heart in real time (13,14). Compared with the left atrial volume measured by MRI and CT, RT-3DE measurement has better repeatability and inter observer repeatability. Therefore, combined 2D-STI and RT-3DE can more comprehensively evaluate changes to cardiac structure and function.

In this study, 2D-STI combined with RT-3DE was used to evaluate cardiac function in patients with ETH combined with PAF, and the changes of cardiac function in the 24 months following treatment were observed. The aim was to provide a new method for disease assessment and curative effect evaluation in patients with ETH combined with PAF. We present the following article in accordance with the STROBE reporting checklist (available at http://dx.doi.org/10.21037/jtd-20-3577).

This prospective study was conducted from January 2017 to January 2020. A total of 150 cases were enrolled including 50 with ETH combined with PAF in the PAF observation group, 50 with ETH but not with PAF in the PAF control group, and 50 healthy volunteers in the healthy group. The inclusion criteria were as follows: (I) all subjects were followed up for 24 months after joining the study; (II) patients in the PAF observation group and PAF control group all met the clinical diagnosis of ETH (15,16); (III) patients in the PAF observation group were in compliance with the clinical diagnosis; (IV) after physical examination, the patients in Healthy group were completely healthy; (V) the age range was 50–65 years old. The exclusion criteria were: (I) patients with respiratory and digestive function, blood circulation and serious hematological diseases, and patients with hyperthyroidism, malignant tumors, disorders of glucose metabolism or coronary atherosclerosis, and patients with valvular diseases or other heart diseases; (II) patients who were unable to complete the study.

All procedures performed in this study involving human participants were in accordance with the Declaration of Helsinki (as revised in 2013). The study was approved by the Clinical Ethics Committee of The Central Hospital of Wuhan (No. CHW201609). All participating patients had been informed of its content and signed informed consent.

Patients were placed in the left decubitus position and instructed to breathe calmly. The ECG of the chest lead was synchronized and two-dimensional dynamic images of the left ventricular long axis, the apical four chamber heart, and the apical two chamber cardiac section collected. The left ventricular anteroposterior diameter (LAD) was measured in the left ventricle by long axis measurement and a clear apical four chamber image was obtained after the 3-dimensional X5-1 probe commenced. After adjusting the gain, contrast, brightness, and other factors to produce an appropriate left atrium image, the patient was asked to hold their breath at the end of a breath and “Full-volume” imaging was performed. The best full-volume three-dimensional images were collected for four consecutive cardiac cycles.

Using a QLAB workstation, the sampling points were placed in the atrium septum of the mitral annulus, left atrial side wall, and the left roof of the mitral annulus in the apical four chamber and apical two chamber heart images, respectively. The left atrial strain and strain rate curves were automatically analyzed in the aCMQ mode (Figure 1A) and the left atrial systolic peak strain (Ss, Se, Sa) and peak strain rate (SRs, SRe, SRa) were measured in the left ventricular systolic phase, the early diastolic stage of left ventricle, and the late left ventricular diastolic function. The 2D mean peak strain (mSs, mSe, mSa) and strain rate (mSRs, mSRe, and mSRa) were calculated, and all parameters were measured 5 times (17). 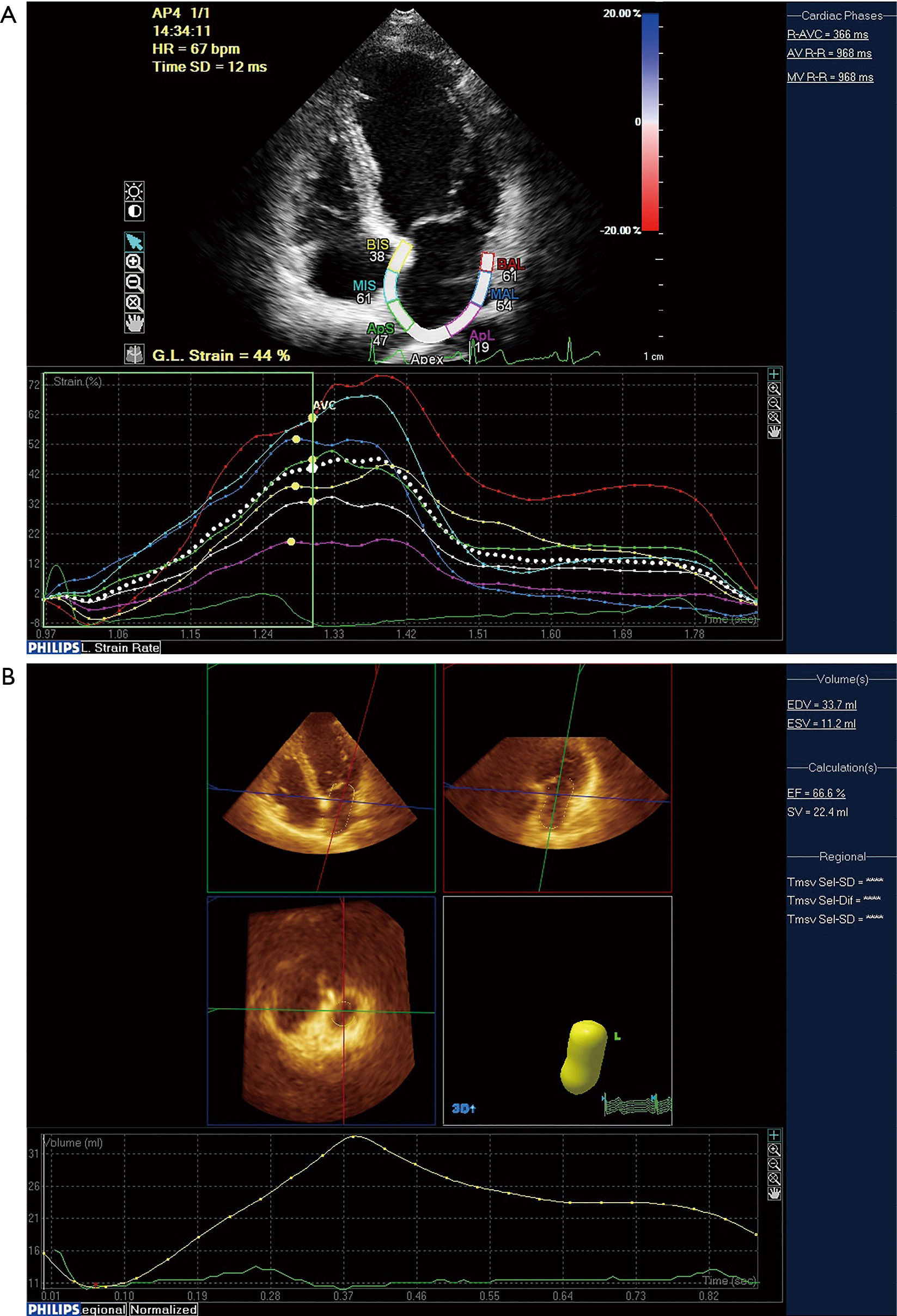 Figure 1 Examples of image analysis in the QLAB workstation. (A) The left atrial strain and strain rate curves were automatically analyzed in the aCMQ mode. (B) After entering the 3DQAdvance mode, a reference point was drawn from the roof of the apical two-chamber view, and left atrial time-volume curve was automatically drawn.

An electronic summary table to register the patient's treatment information and observation index data was established. When the patient was hospitalized, we conducted a full communication study emphasizing the necessity of follow-up for 24 months after the image examination. The medical records of all patients were recorded in detail.

These were the index measurements in the PAF observation group (patients in this group were treated with telmisartan combined with rosuvastatin commenced); blood pressure, IVST, LAD, PWT, LVEF, LATEF, LAEI, mSs, mSe, mSRs, and mSRe. The index measurements were recorded at base, 12 months, and 24 months after treatment.

SPSS 24.0 (SPSS Inc. Chicago, IL, USA) was used for statistical analysis. The count data was represented by examples (percent) (n (%)); the theoretical number T ≥5 and the total sample size n ≥40 using Pearson χ2 test; the theoretical number T <5 but T ≥1 and n ≥40 using the continuous correction of χ2 test; and the theoretical number T <1 or n <40, using Fisher's exact test. The measurement data obeying normal distribution were expressed as mean ± standard deviation () indicating the comparison between groups was performed with an independent sample t test, and the comparison within a group was performed with a paired sample t test. Repeated measurement analysis of variance was used to compare multiple sets of measurement data and data that did not obey the normal distribution were expressed as P50 (P25, P75) and the Mann-Whitney U test used for comparison. The Mann-Whitney U test was also used for the difference in distribution of grade data and both levels of α=0.05 were used for the test level. Statistical significance was set at P<0.05.

Comparison of ultrasound indexes of the three groups

As shown in Table 4, compared with the healthy group, the PAF observation and PAF control groups had a significantly higher LAVI and significantly lower LATEF and LAEI (P<0.001).

During the 2-year follow-up, a total of 12 patients left the study including five in the first and seven in the second years.

When compared with measurements obtained before treatment commenced, those obtained both at the 12- and 24-month follow ups showed significant and progressive improvement.

In this study, atrial remodeling and decreased cardiac function in ETH combined with PAF patients were confirmed using 2D-STI and RT-3DE. By measuring the strain and strain rate of local atrial muscle, 2D-STI quantitative analysis could reflect left atrium remodeling (24) and RT-3DE could display the spatial structure of the heart in real time and three-dimensionally, the law of motion and its neighboring relationship, and heart volume in real time (25). Atas et al. (26) showed that the combined application of 2D-STI and RT-3DE could improve the accuracy of left atrial function evaluation. The three functions of the left atrium and related indicators (27,28) are listed below:

All patients with ETH combined with PAF in this study received telmisartan combined with rosuvastatin calcium and 2D-STI and RT-3DE technology were used to evaluate their therapeutic effect. During the 2-year follow-up, we found that atrial remodeling in patients with ETH combined with PAF had a significant reversal and cardiac function had been significantly restored. These patients still had atrial fibrillation after receiving the medication, but its frequency was low. Telmisartan is a new type of angiotensin II receptor blocker with a strong antihypertensive effect (31). It can effectively maintain balance of the renin-angiotensin-aldosterone system and inhibit the production of inflammatory mediators. Furthermore, it has a certain inhibitory effect on atrial remodeling and electrical remodeling. Angiotensin II receptor blockers play an important role in clinical blood pressure lowering treatment and telmisartan can also inhibit endogenous angiotensin. In addition, telmisartan can effectively prevent recurring atrial fibrillation. Several reasons have been forwarded to account for this effect (32,33). Firstly, telmisartan can selectively block angiotensin type I receptors, thereby reducing the phenomenon of atrial myocardial calcium overload, reducing the myocardial shortening caused by high-frequency electrical stimulation of atrial fibrillation, and reducing atrium myoelectric remodeling. Secondly, it has a certain inhibitory effect on the renin-angiotensin-aldosterone system, which can block the collagen proliferation and myocardial fibrosis caused by angiotensin type I receptors. A third possible mechanism pertains to the ability of telmisartan to activate angiotensin II receptors, thereby effectively exerting vasodilation, anti-proliferation, anti-fibrosis and regulating apoptosis which can protect the heart, reverse left atrium myocardial hypertrophy, and improve diastolic function and reduce atrial remodeling. Rosuvastatin calcium is a common statin medication which can competitively inhibit the endogenous cholesterol synthesis rate-limiting enzyme reductase, block the intracellular mevalonic acid metabolism pathway, reduce intracellular cholesterol synthesis, and regulate blood lipid levels effectively (34,35). Statins can also effectively stabilize plaques, regulate vascular endothelial function, and inhibit inflammation, oxidation, and the proliferation and migration of vascular smooth muscle cells, thereby improving myocardial remodeling (36).

The limitations to this research are (I) there was no separate analysis software for the left atrium and (II) we did not set up a control group to explore the therapeutic effect of telmisartan combined with rosuvastatin calcium because of the small number of patients.

In summary, 2D-STI and RT-3DE technologies could accurately and comprehensively evaluate changes in atrial remodeling and cardiac function. In patients with ETH combined with PAF, the left atrial ‘storage’ and ‘transport’ functions were reduced, the ‘Auxiliary pump’ function disappeared, and the stiffness of the left atrium increased. Telmisartan combined with rosuvastatin calcium treatment could significantly reverse these changes.

Reporting Checklist: The authors have completed the STROBE reporting checklist. Available at http://dx.doi.org/10.21037/jtd-20-3577

Conflicts of Interest: All authors have completed the ICMJE uniform disclosure form (available at http://dx.doi.org/10.21037/jtd-20-3577). The authors have no conflicts of interest to declare.

Ethical Statement: The authors are accountable for all aspects of the work in ensuring that questions related to the accuracy or integrity of any part of the work are appropriately investigated and resolved. All procedures performed in this study involving human participants were in accordance with the Declaration of Helsinki (as revised in 2013). The study was approved by the Clinical Ethics Committee of The Central Hospital of Wuhan (No. CHW201609). All participating patients had been informed of its content and signed informed consent.