pPCI is the first treatment in patients with STEMI, despite advances in coronary reperfusion, papillary muscle infarction (PapMI) can result in dysfunction of the papillary muscles and subsequent ischemic functional mitral valve regurgitation (MR). MR occurs in 30–50% of cases after ST-segment elevation myocardial infarction (STEMI) and is independently associated with increased mortality, few reports assessed the Prognostic relevance and clinical features of patients with PapMI only (1-3). However, the precise clinical characteristics of PapMI with MR in patients with STEMI after primary percutaneous coronary intervention (pPCI) are currently under debate, and data on the prognostic significance of PapMI are not clear, partly because PapMI is difficult to verify or exclude by traditional imaging techniques such as echocardiography or myocardial perfusion imaging (SPECT). Late gadolinium-enhanced (LGE) cardiac magnetic resonance (CMR) imaging, typically using an inversion-recovery gradient echo sequence 10–30 min after intravenous injection of a gadolinium-based contrast agent (4-6), allows for the identification and accurate quantitative analysis of MI (7,8). Thus, our aims of this study were to determine the clinical features and prognosis of PapMI with MR in patients with STEMI detected by CMR. We present the following article in accordance with the STROBE reporting checklist (available at http://dx.doi.org/10.21037/jtd-20-3476).

The population was composed of consecutive patients with first STEMI enrolled in a prospective study between June 2018 and February 2020 at Drum Tower Hospital affiliated to Medical School of Nanjing University and Xinxiang Central Hospital. We used the Sample size formula to calculate the Sample size required for the study before it stared. The definition of STEMI was based on the ESC/ACCF/AHA/WHF consensus document, and was established by the presence of typical chest pain lasting >30 minutes, sustained 1.0 mm ST-segment elevation in at least 2 contiguous leads on ECG, and cardiac enzyme elevation. According to the results of CMR and echocardiography, patients were divided into PapMI with MR, PapMI (PapMI without MR), and non-PapMI groups. All patients underwent emergency coronary angiography and coronary intervention. The exclusion criteria were as follows: aged >85 years, renal insufficiency, cardiac shock, patients with contraindications for CMR, cardiomyopathy, and mitral valve disease history. All procedures performed in this study involving human participants were in accordance with the Declaration of Helsinki (as revised in 2013). Informed consent was taken from all the patients. The ethics committee of Drum Tower Hospital affiliated to Medical School of Nanjing University and Xinxiang Central Hospital approved the study protocol (No.2019-190-03). Bias control through multicenter study and reduce the rate of loss to follow-up. Study profile see Figure 1. 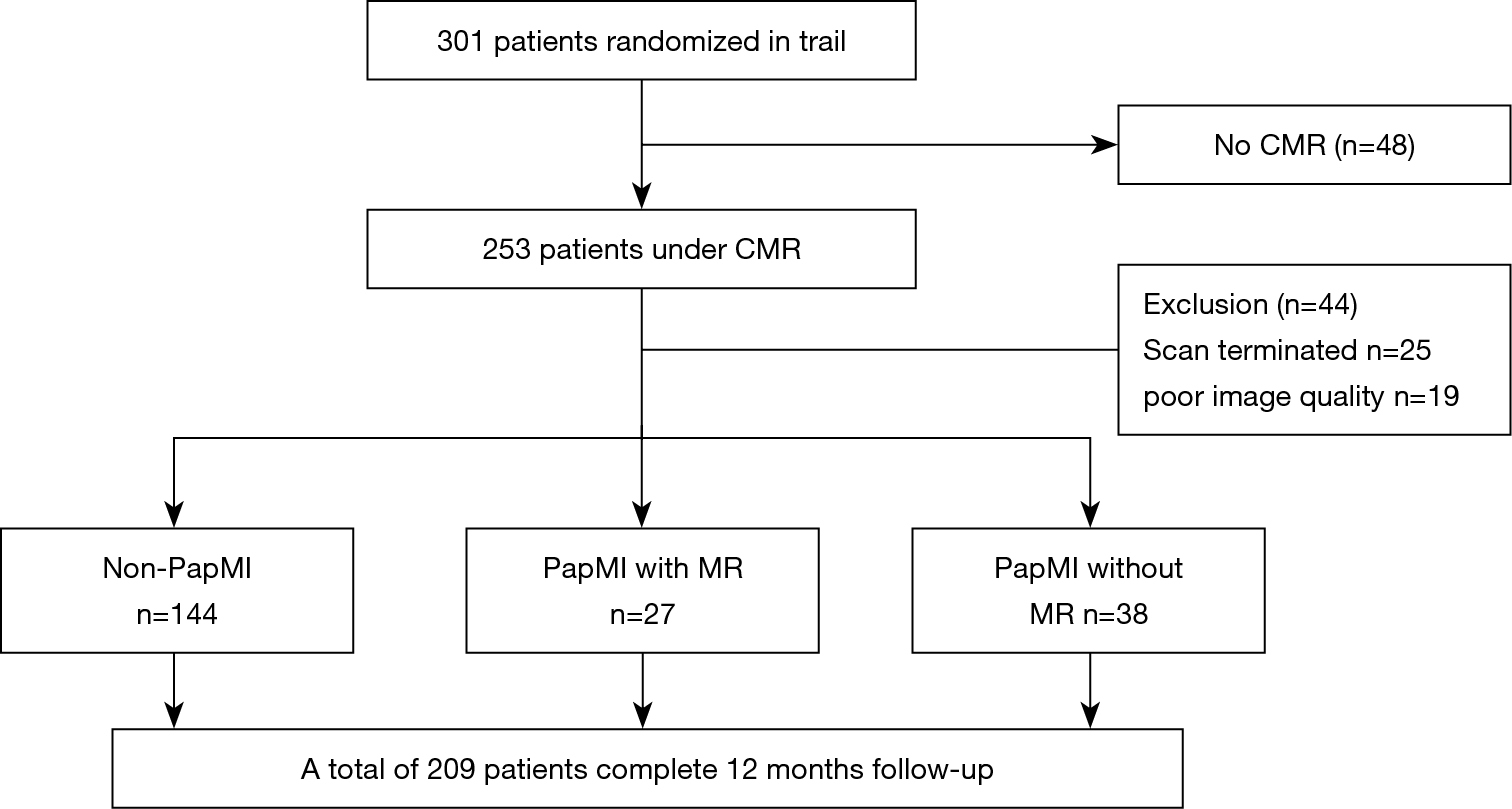 Coronary angiography was performed by the radio or femoral approach. All patients underwent P-PCI and stenting according to standard techniques. Stent implantation was successfully completed in all patients. 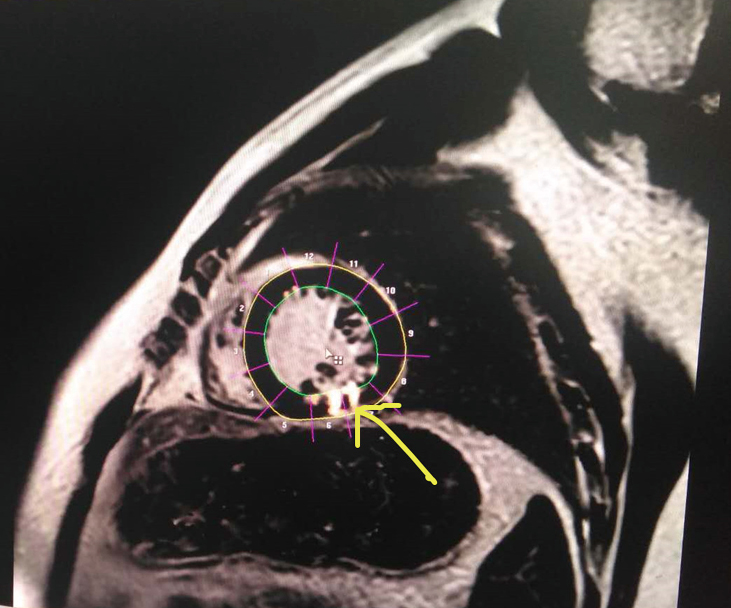 The primary clinical endpoint was defined as a composite of cardiovascular death, reinfarction, in-stent restenosis (ISR), readmission, and heart failure within 12 months after infarction. A blinded independent clinical events committee adjudicated all potential cardiovascular events based on prospectively defined guidelines (10,11). All patients received follow-up in outpatient clinics, or by telephone and email. Follow-up was performed every 3 months.

Clinical characteristics of the study population

A total of 209 patients were enrolled in the current study. Clinical characteristics of the patients are presented in Table 1. A total of 27 patients with a median age of 66.8 years showed PapMI with MR after PCI (PapMI with MR group) and 38 patients with a median age of 61.2 years showed PapMI without MR after PCI (PapMI group), whereas 144 patients did not develop PapMI after PCI (non-PapMI group), with a median age of 57.0 years. Compared with the non-PapMI and PapMI group, the PapMI with MR group had more advanced age (P=0.001), higher troponin I (P<0.001), higher SYNTAX score (P<0.001), more diabetics (P=0.006), and longer time to reperfusion [symptom onset-to-balloon (SO to B), P=0.001] at presentation. There were no differences in clinical parameters including gender, BMI, smoking status, hypertension, medication history, and other baseline characteristics among the 3 groups. 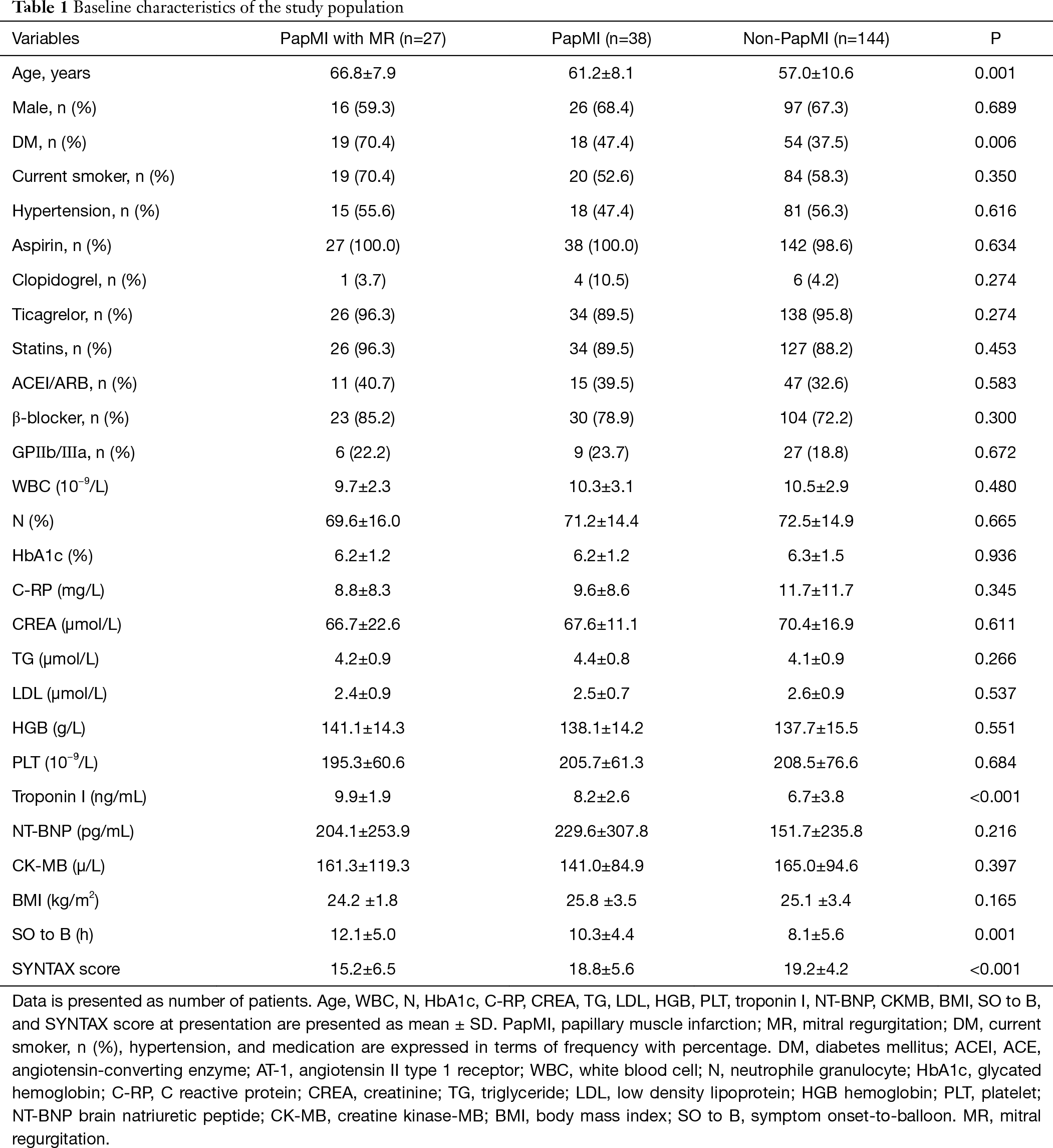 CMR characteristics of the study population

Predictors of PapMI with MR 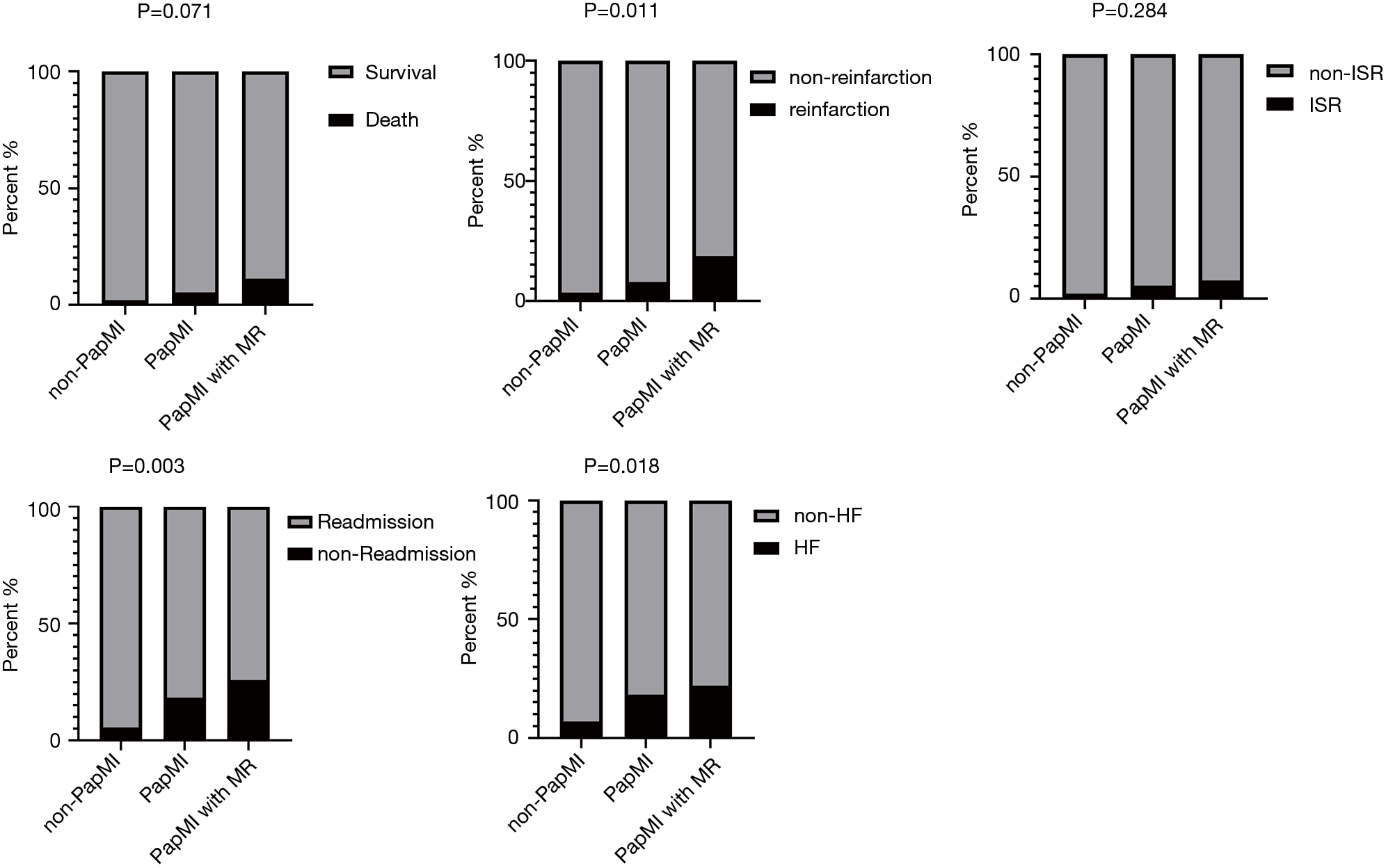 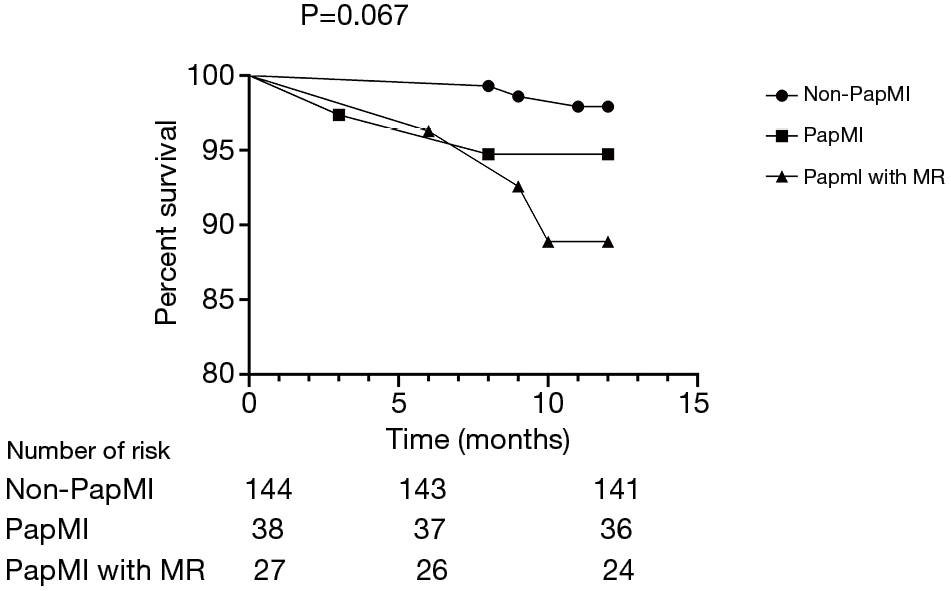 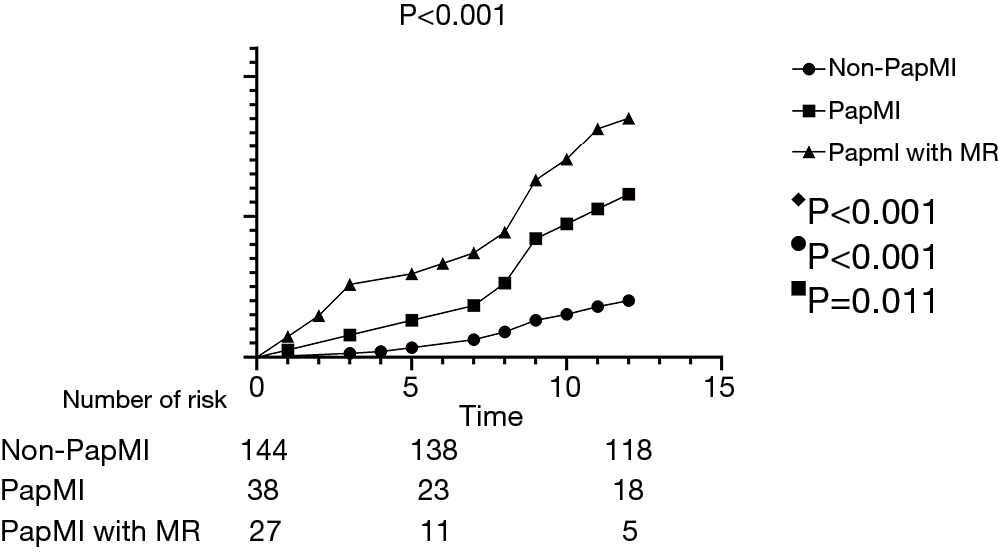 Compared to results published by Tanimoto et al. (1,12-16) reporting a prevalence of 40%, PapMI was observed more frequently in the present study with a prevalence of 45%. We detected 27 PapMI with MR cases among 209 STEMI patients (the incidence was 13%), and 65 PapMI patients (the incidence was 42%), suggesting that PapMI with MR is not so rare in STEMI and is common in PapMI. It’s similar to the result of Chinitz et al. (17).

MVO indicates a lack of adequate tissue perfusion within the infarcted myocardium, and is an independent risk factor for PapMI as visualized by CMR in previous studies. This conclusion is consistent with our study. PapMI was also related to obvious myocardial damage and MVO as detected by CMR. Others (19) have confirmed that PapMI was associated with severe reperfusion injury such as MVO and hemorrhage. However, our study is the first to use CMR to assess PapMI combined with MR including infarct extent and severe reperfusion injury such as MVO. Therefore, our results support previous findings by illustrating that MVO was an independent predictor for PapMI combined with MR [OR, 4.37 (CI, 1.19–16.0), P=0.028]. Grieve et al. (19). showed that impaired LV function was an independent risk factor for the presence of PapMI, and our study showed similar findings in the PapMI with MR group [OR, 0.91 (CI, 0.86–0.97), P=0.004].

Ischemic MR has been considered an independent risk factor of increased mortality in patients with PapMI (12,15,20-22). However, very few studies have reported on prognosis in PapMI with MR. Our study is the first to demonstrate that PapMI with MR has a poor prognosis. In our study, patients with PapMI with MR had significantly more MACE compared to the PapMI and non-PapMI groups [PapMI with MR, 23 (85.2%) vs. PapMI, 21 (55.3%) vs. non-PapMI, 29 (20.1%)] at 1-year follow-up (P<0.001, respectively). However, similar to previous results (23), there were no significant differences in mortality rates among the 3 groups (P=0.071).

In view of the relationship between PapMI and MR, we should pay attention to patients have suffered PapMI combined with MR, and beware patients with MR diagnosed by echocardiography caused by PapMI.

The incidence of PapMI with MR as determined by CMR imaging is not uncommon in STEMI patients after pPCI. Compared to the PapMI and non-PapMI groups, the PapMI with MR group had worse prognosis. Our data contributes to an improved understanding of the clinical characteristics of PapMI with MR, and may help aid in the prevention of MACE.

Reporting Checklist: The authors have completed the STROBE reporting checklist. Available at http://dx.doi.org/10.21037/jtd-20-3476

Conflicts of Interest: All authors have completed the ICMJE uniform disclosure form (available at http://dx.doi.org/10.21037/jtd-20-3476). The authors have no conflicts of interest to declare.

Ethical Statement: The authors are accountable for all aspects of the work in ensuring that questions related to the accuracy or integrity of any part of the work are appropriately investigated and resolved. All procedures performed in this study involving human participants were in accordance with the Declaration of Helsinki (as revised in 2013). Informed consent was taken from all the patients. The ethics committee of Drum Tower Hospital affiliated to Medical School of Nanjing University and Xinxiang Central Hospital approved the study protocol (No.2019-190-03).