Prevalence of comorbidities in a surgical pectus excavatum population

We present the following article in accordance with the STROBE reporting checklist (available at http://dx.doi.org/10.21037/jtd-20-3352).

Between 2001 to 2012, 1,046 patients diagnosed with moderate to severe pectus excavatum based on clinical examination underwent surgical correction at our center with the modified Nuss procedure ad modum Pilegaard (10). Patients were identified and included if registered under the procedure code for correction of pectus excavatum (n=1,047). Exclusion criteria was missing medical records (n=1). Hospital medical records were retrospectively assessed between 2018 to 2019 and information was registered on gender, date of birth, date of operation, past medical history requiring hospitalization or known comorbidities registered at the time of surgery. Furthermore, comorbidities and past medical conditions were categorized separately if a solitary condition was notably prevalent or otherwise clustered according to the affected organ system in the following categories: gastric, urologic, neurologic, psychiatric, cardiac, ear-nose-throat, and other.

The study was conducted in accordance with the Declaration of Helsinki (as revised in 2013). The study was approved by the head of the Department of Cardiothoracic and Vascular Surgery, Aarhus University Hospital, and individual consent for this retrospective analysis was waived.

Characteristics of the study population and gender differences

A total of 623 comorbidities and past medical conditions were found in 1,046 patients. Table 1 shows the baseline characteristics of the study population as well as the number of comorbidities per patient. The median age was 16.8 years and the male to female ratio was 5:1. The majority of the population had no comorbidities (56.2%), although nearly one third (31.2%) of the patients had one comorbidity and one of eight patients (12.6%) had more than one comorbidity (Figure 1). 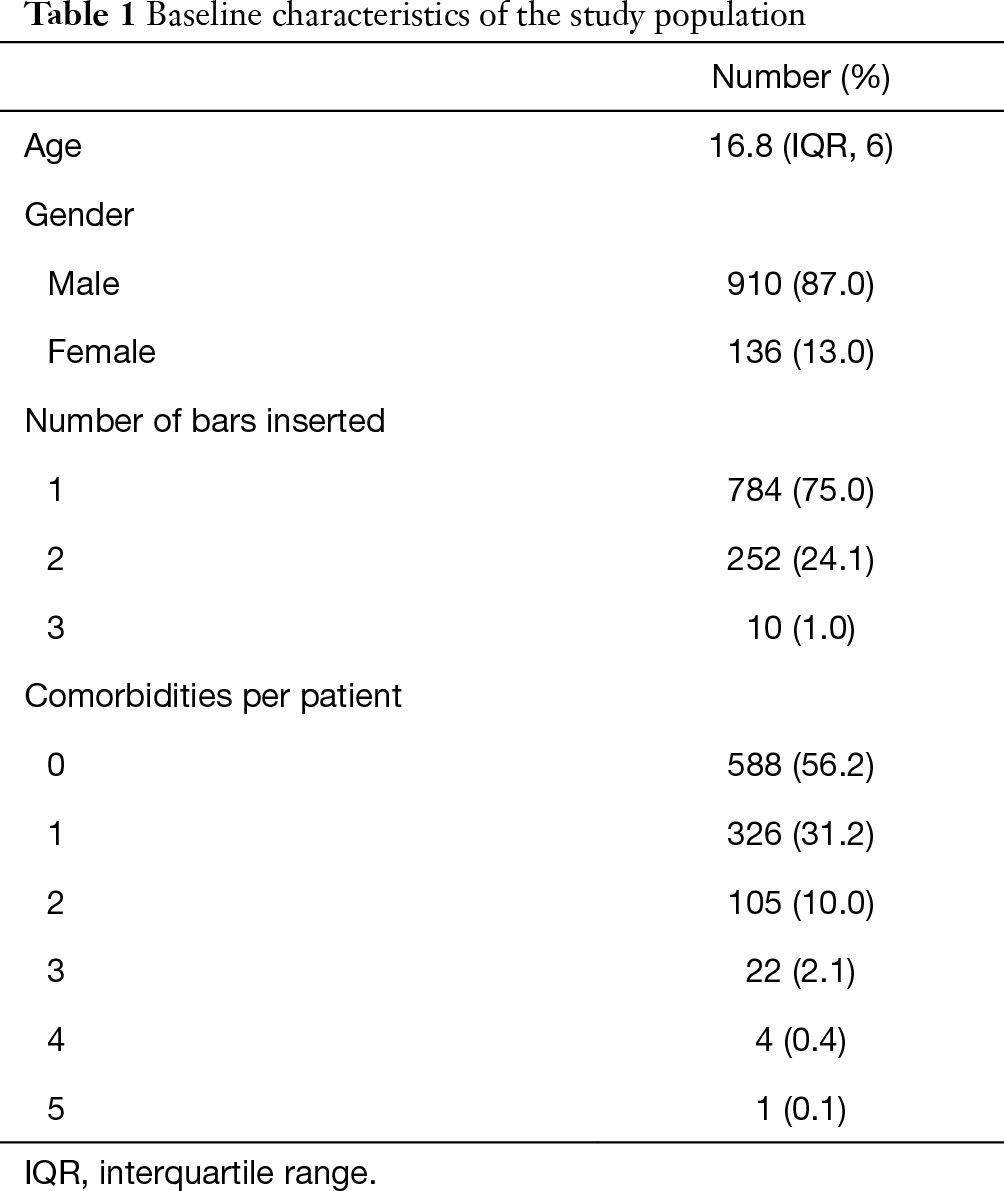 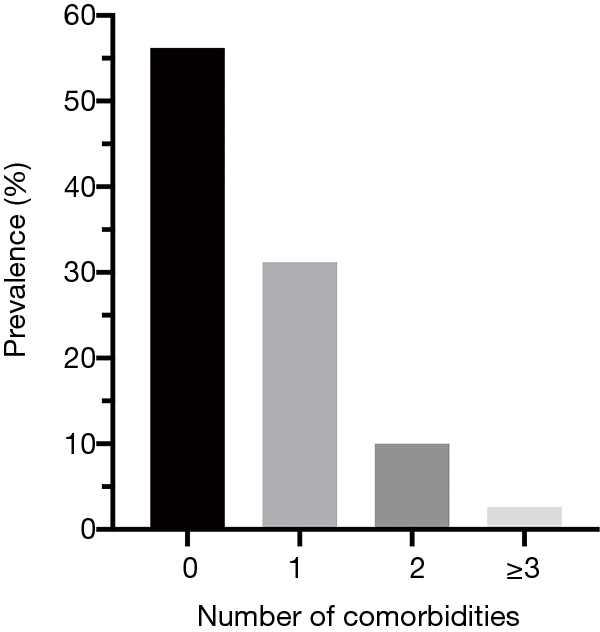 Figure 1 Prevalence of comorbidities and past medical conditions per patient in 1,046 patients undergoing minimal invasive repair of pectus excavatum. 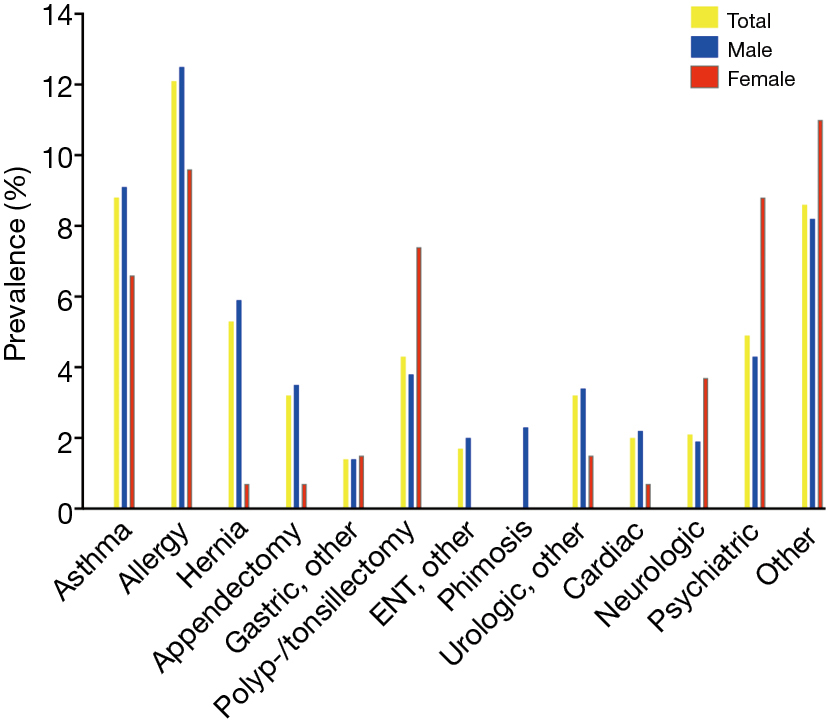 A total of 54 patients had a history of surgical hernia repair—predominantly inguinal hernias (27 patients) followed by umbilical hernias (8 patients) and diaphragmatic hernia (1 patient). The remaining hernia types was not specified in the medical charts (18 patients). A total of 46 gastrointestinal conditions were registered with majority of patients having a history of previous appendectomy (32 patients), followed by inflammatory bowel disease (6 patients) and pyloric stenosis (3 patients).

Phimosis and other urologic conditions

Other not classified conditions

Various conditions could not be classified in the above-mentioned categories (90 patients). Some of these patients had a history of scoliosis (9 patients), morbus Scheuerman (6 patients), Marfan syndrome (4 patients), muscular dystrophias (3 patients), Ehlers Danlohs syndrome (2 patients), and medically treated acne vulgaris (10 patients).

Both asthma (8.8%) and allergies (12.3%) were found remarkably prevalent in this study. A Nordic register based cross-sectional study found comparable prevalence of asthma (12%), atopic dermatitis (13%), and allergic rhinoconjunctivitis (7%) in danish children (16). As these conditions peak in childhood and adolescence, the high prevalence of these conditions in our study population are more likely to be due to the age distribution rather than the presence of pectus excavatum.

The strength of this study is the systematic assessment of comorbidities in a large single-center study population. The retrospective study design and lack of a control group limit the scientific value of the findings. No control group could be sampled based on hospital medical records for comparison, as information would only be accessible for hospitalized patients at the time of hospitalization. This would underestimate prevalence of comorbidities in the control group and imply major risk of bias. Therefore, it is not possible to thoroughly discern differences in the comorbidity burden in pectus excavatum patients compared to the background population. Further studies are required to fully comprehend the health-related implications of the pectus excavatum phenotype.

In patients undergoing minimal invasive repair of pectus excavatum, the majority of patients had no comorbidities or previous conditions. However, notable prevalence of asthma, allergies, previous hernia surgery, and psychiatric comorbidity were found. When comparing our findings to previous studies, the comorbidity burden in patients with pectus excavatum requiring surgery seems be comparable to the background population. Thus, our findings do not support screening this patient category for associated conditions.

Reporting Checklist: The authors have completed the STROBE reporting checklist. Available at http://dx.doi.org/10.21037/jtd-20-3352

Conflicts of Interest: All authors have completed the ICMJE uniform disclosure form (available at http://dx.doi.org/10.21037/jtd-20-3352). Dr. TDC reports personal fees from AstraZeneca, Boehringer-Ingelheim, Roche Diagnostics, Merck Sharp & Dohme (MSD, and Bristol Myers Squibb, all outside the submitted work. The other authors have no conflicts of interest to declare.

Ethical Statement: The authors are accountable for all aspects of the work in ensuring that questions related to the accuracy or integrity of any part of the work are appropriately investigated and resolved. The study was conducted in accordance with the Declaration of Helsinki (as revised in 2013). The study was approved by the head of the Department of Cardiothoracic and Vascular Surgery, Aarhus University Hospital, and individual consent for this retrospective analysis was waived.