Pulmonary hypertension (PH) is a common complication of long-standing lung disease (Group 3 PH), and is associated with decreased functional status, increased oxygen requirement, and increased mortality (1-6). There has been significant growth in therapeutic options for Group 1 pulmonary arterial hypertension (PAH) over the past 2 decades, but these medications have not been approved for use in Group 3 PH. Reversal of hypoxia and treatment of the underlying lung pathology, when possible, are often the only treatment options. Lung transplantation is typically recommended for those who are eligible (7,8). Despite the lack of compelling data for the use of Group 1 PAH medications in Group 3 PH, up to 80% of physicians at PH referral centers report considering these medications in at least some Group 3 PH patients (9). Treatment is particularly challenging for patients with severe right ventricular (RV) failure, and overall outcomes are poor (10-12).

Among the most potent Group 1 PAH medications are parenteral prostanoids. Released in-vivo by endothelial cells, prostanoids act primarily as pulmonary vasodilators but also have anti-thrombotic and anti-proliferative properties (13). When administered parenterally they cause significant non-selective pulmonary vasodilation and have been shown to significantly improve symptom burden and hemodynamics in Group 1 PAH (14). However, as non-selective pulmonary vasodilators, they can potentially lead to worsened hypoxemia by reversing hypoxia-related vasoconstriction. The worsening of hypoxemia is viewed by some as a contraindication for use with Group 3 PH patients, who already suffer from lung-disease related hypoxemia. In a 2014 pilot study utilizing parenteral treprostinil in patients with advanced Group 3 PH with RV dysfunction, there was significant improvement in right heart hemodynamics and RV function on echocardiogram without impacting arterial oxygen saturation (15). This suggests some degree of clinical equipoise for additional research on the use of prostanoid therapies for Group 3 patients, at least in this subset of very severe PH with RV dysfunction where oxygen delivery is restricted by both hypoxic lung disease as well as limited cardiac output (15). We present a retrospective cohort study, in accordance with the STROBE guidelines, of patients at our PH referral center with severe Group 3 PH with RV dysfunction who were treated with parenteral prostanoids, with respect to hemodynamics, biomarkers, oxygenation status, functional capacity, and survival. We present the following article in accordance with the STROBE reporting checklist (available at http://dx.doi.org/10.21037/jtd-20-1635).

This study was a retrospective cohort study that included all patients with severe Group 3 PH, defined as mean pulmonary arterial pressure (mPAP) ≥35 mmHg or mPAP 25–34 with cardiac index (CI) <2.4 L/min/m2 on right heart catheterization (RHC). Patients were included if they had a qualifying lung disease, such as idiopathic pulmonary fibrosis (IPF) or combined pulmonary fibrosis and emphysema (CPFE), along with severe abnormalities on spirometry [forced vital capacity (FVC) or forced expiratory volume in 1 second (FEV1) <50% predicted], or diffuse lung disease on imaging plus a diffusion limitation of carbon monoxide (DLCO) <50% predicted. In addition, patients were required to have initiated intravenous epoprostenol or intravenous or subcutaneous treprostinil between 2007 and 2018 at the University of Texas Southwestern Medical Center. Both treatment naïve and patients previously started on other PH-specific therapies were included, which may be a potential confounder. Patients starting parenteral therapy within 2 weeks or less of starting an oral therapy were considered treatment naïve. The PH evaluation included an echocardiogram, RHC, pulmonary function tests (PFTs) and ventilation-perfusion scan, as well as additional tests when indicated. Institutional review board approval was obtained from the University of Texas Southwestern Medical Center Human Research Protection Program (#052015-041), including a waiver of informed consent. The study was conducted in accordance with the Declaration of Helsinki (as revised in 2013).

Continuous variables were described as median and interquartile range (IQR), unless otherwise stated. Changes between baseline at initiation of parenteral therapy and clinical follow-up were compared using the Wilcoxon signed-rank test. For the survival assessment, patients were censored at the time of transplantation. A Kaplan-Meier curve was created for visualization of survival time; statistical analysis was not performed. Statistical analyses were conducted with NCSS V.11 (NCSS LLC, Kaysville, UT, USA) and P values <0.05 were considered statistically significant.

The study population consisted of nine consecutive patients with Group 3 PH who were initiated on parenteral prostanoids between 2007 and 2018. There were 5 women (55.6%) with a median age of 69 (range, 54–70) years. Lung function at baseline was variable; 3 had an FVC or FEV1 <50% predicted, while 6 had an FVC and FEV1 >50% combined with a DLCO <20% predicted and diffuse lung disease on imaging. Clinical narratives are shown in Table 1. Patients received intravenous epoprostenol (n=5), intravenous treprostinil (n=2), or subcutaneous treprostinil (n=2). At the time of parenteral prostanoid initiation, five patients were treatment naïve, two were receiving oral therapies including phosphodiesterase-5 inhibitors (PDE5is) and endothelin receptor antagonists (ERAs), and two patients were receiving triple therapy including a non-parenteral prostanoid (Table 1). 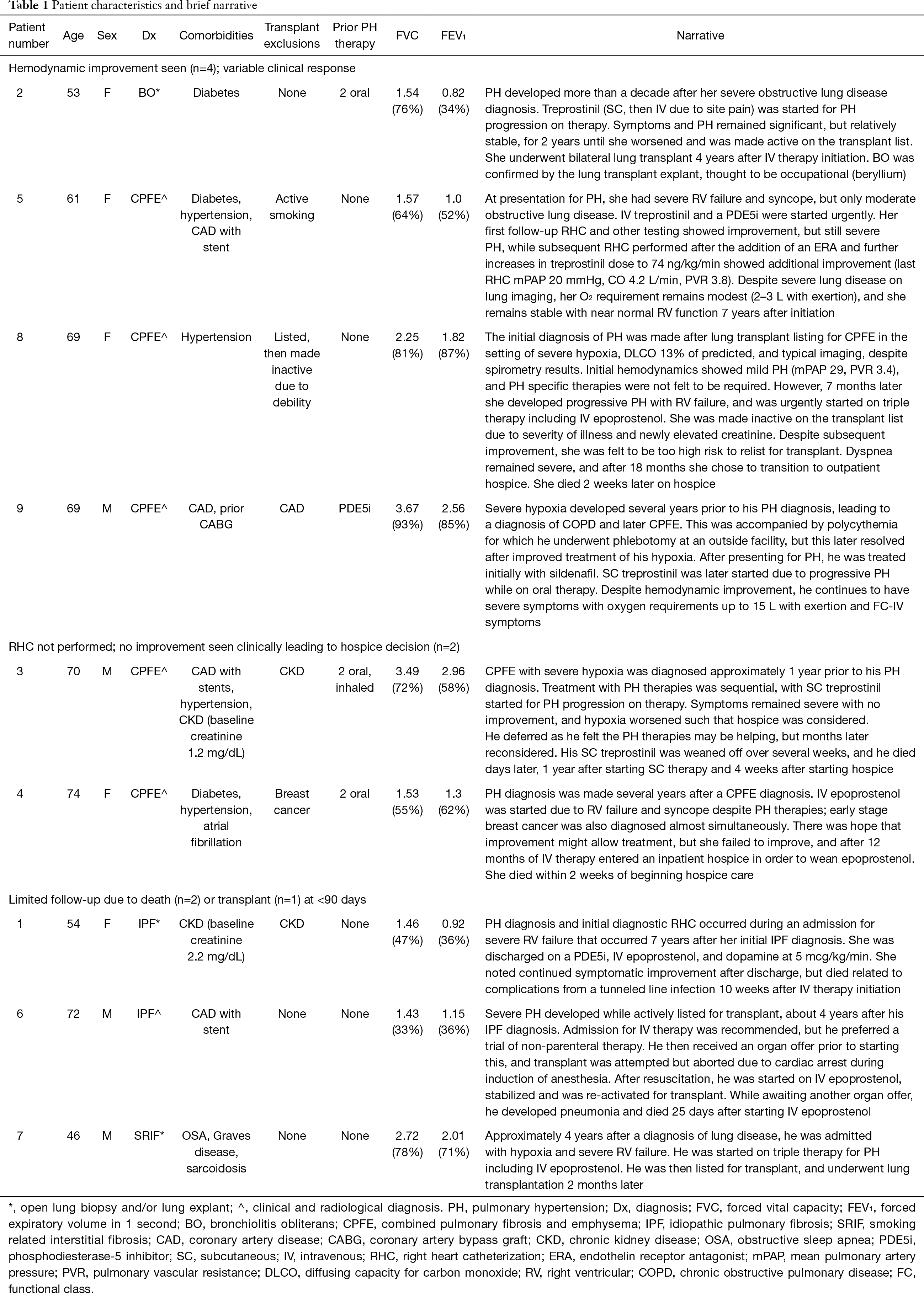 Median survival free from lung transplantation from the time of parenteral prostanoid initiation was 609 days (Figure 3). Only three patients were deemed eligible for lung transplantation, two of whom underwent lung transplantation during follow-up while one patient died 23 days after prostanoid initiation. A fourth patient who was actively listed at the time severe PH was diagnosed was removed from the transplant list due to frailty, deconditioning and a marginal increase in creatinine. Reasons for transplant ineligibility for the remaining patients are listed in Table 1. Three patients transitioned to hospice care due to a combination of persistent severe dyspnea, high FiO2 requirement limiting all activity, and prostacyclin associated side effects such as headache, nausea, reduced appetite and diarrhea; all three died within weeks of beginning prostacyclin down-titration. 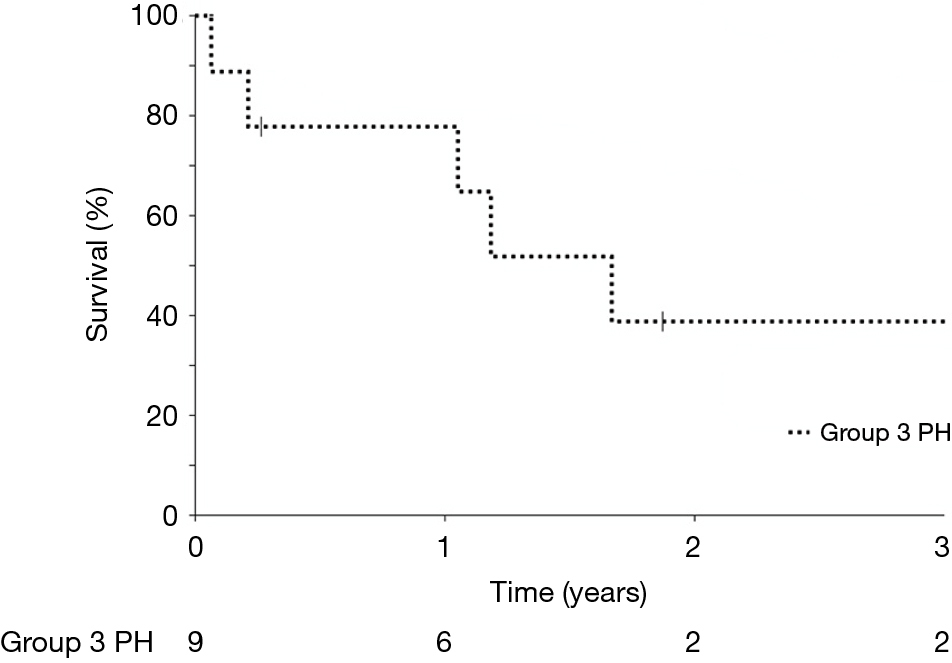 In this retrospective cohort study, we evaluated the effects of parenteral prostanoids on hemodynamics, biomarkers, oxygenation, and functional capacity in patients with severe Group 3 PH and severe right heart dysfunction. We found no statistically significant improvement in NT-proBNP levels, exercise capacity, or functional class, while oxygen requirement at rest and oxygen saturation during exertion significantly worsened. However, overall results were heterogenous, and among those undergoing catheterization, hemodynamics generally improved. Several patients demonstrated clinical stabilization, including two who subsequently underwent lung transplantation and one with satisfactory symptom control and long-term stability with medical therapy.

Symptoms remained severe for most patients, with all patients remaining functional class III or IV at first follow-up and three patients eventually choosing to pursue hospice care. All three noted both significant prostanoid-associated side effects, such as headache, nausea and diarrhea, as well as severe dyspnea. Oxygenation was also noted to have worsened for many patients, both at rest and during exertion. We speculate that prostanoid therapy contributed to their hypoxia, due to worsened ventilation-perfusion mismatch. Although progression of the underlying lung diseases is also possible, PFTs remained stable in most patients throughout follow-up. PAH therapies can worsen hypoxemia through non-selective pulmonary vasodilation, particularly in patients with lung disease. Parenteral prostanoids may be more likely to cause hypoxemia as opposed to other PAH therapies, based on short-term studies showing greater increases in shunt fraction and ventilation-perfusion mismatch relative to inhaled prostanoids (16), oral PDE5is (17), and ERAs (18). Although the effects on oxygenation for many patients were modest, the median supplemental oxygen requirement at rest increased from 4 to 6 L/min, moving most patients outside the range of what many portable concentrators can deliver.

This finding adds to other evidence suggesting caution when considering PH therapies in this patient population. However, these results must also be considered in the context of the overall clinical setting. Right heart function was severely impaired in many patients, and one goal of therapy was to achieve sufficient stabilization such that lung transplantation evaluation and listing could be accomplished. Further, from an oxygen delivery standpoint, a modest decline in systemic oxygenation may be acceptable as long as it is not severe and cardiac output increases sufficiently such that overall oxygen delivery is preserved or increases. Notably, a similar trade-off is considered with atrial septostomy in end-stage PAH patients. A separate concern is the low rate of transplant eligibility. One might argue that parenteral prostanoids should only be considered in patients highly likely to be eligible for lung transplantation. However, eligibility is often not clear at the time of initiation. For example, active smokers who are able to quit may later be considered transplant eligible approximately 6 months after stopping, while renal insufficiency, the most common reason for exclusion in our series, may improve with the treatment of right heart failure.

Controlled studies also suggest caution with the use of PAH therapies in Group 3 PH. Early studies of PH therapies in lung disease did not require PH, instead looking at whether PH therapies might be effective for interstitial lung diseases in general (19-22). At large, these studies were negative, and an IPF study, ARTEMIS-1, was halted early after higher rates of hospitalization and disease progression were seen with ambrisentan therapy (21). In later studies that did focus on Group 3 PH, a few showed positive results (23-25), but larger randomized controlled trials have shown either no improvement (26), or possible harm, as suggested by RISE-IIP, a randomized controlled trial of riociguat which was terminated early due to increased severe adverse event rate and mortality (27). However, severe RV dysfunction appears to have been uncommon (or not assessed) in most studies. One exception is STEP-IPF, a randomized controlled trial of sildenafil in IPF. In a post-hoc analysis, possible improvement was suggested for the subgroup of patients with RV dysfunction at baseline. Nevertheless, the post-hoc nature and small subgroup size in an otherwise negative study raises concerns about whether this will be reproducible (28).

Limitations in our current study include retrospective data collection, missing data, and potentially bias in types of missing data as sicker patients may have been more likely to die prior to follow-up testing. Additional limitations include the inherent heterogeneity of the hypoxemic lung diseases and background oral therapies. Also, without a control group it is impossible to definitively determine whether patients overall benefitted or were harmed by the prostanoid therapy (or potentially both). Finally, our cohort size was small, limited by the low prevalence of the population of patients typically considered eligible for these therapies. Our study findings are therefore very preliminary.

In summary, we found no statistically significant improvement in NT-proBNP levels, exercise capacity, or functional class, while oxygen requirement at rest and oxygen saturation during exertion significantly worsened. However, the results were heterogenous. Our results suggest that parenteral prostanoids should not generally be considered in the treatment of Group 3 PH patients.

Funding: This study was funded wholly with internal departmental funds.

Reporting Checklist: The authors have completed the STROBE reporting checklist. Available at http://dx.doi.org/10.21037/jtd-20-1635

Ethical Statement: The authors are accountable for all aspects of the work in ensuring that questions related to the accuracy or integrity of any part of the work are appropriately investigated and resolved. Institutional review board approval was obtained from the University of Texas Southwestern Medical Center Human Research Protection Program (#052015-041), including a waiver of informed consent. The study was conducted in accordance with the Declaration of Helsinki (as revised in 2013).