Aspirin plus ticagrelor or clopidogrel on graft patency one year after coronary bypass grafting: a single-center, randomized, controlled trial

Coronary artery bypass grafting (CABG) remains the “gold standard” treatment for coronary artery revascularization in patients with left main or complex multivessel disease, left ventricular dysfunction, and diabetes (1). Saphenous veins are still the most frequently used conduits for CABG in the United States and China (2). Yet, unlike arterial graft that has a high long-term patency rate, the patency of saphenous vein graft (SVG), which is associated with worse long-term outcomes patency, is only 80% to 85% at 1 year (3).

Among many factors that contribute to SVG failure, platelet activation and thrombosis have been identified as a major risk factor for early SVG stenosis. Antiplatelet therapy with aspirin, which can improve vein graft patency and reduce major adverse cardiac event (MACE) rates, has been recommended after CABG. Despite the use of aspirin, adverse cardiovascular event rates in the first year after CABG exceed 10% (4). Dual antiplatelet therapy (DAPT) with aspirin + a P2Y12 receptor antagonist (clopidogrel) has shown to enhance antiplatelet activity and improve outcomes in patients after CABG (5,6). Yet, some individuals may be less responsive to clopidogrel. This antiplatelet medication is activated by several enzymes, including CYP2C19; genetic variation in CYP2C19 may alter enzyme activity (7).

Ticagrelor, as a promising new antiplatelet drug that is reversibly binding and direct-acting P2Y12 receptor antagonist, has shown beneficial results compared with clopidogrel in patients with acute coronary syndromes (ACS) (8). Several studies have suggested that ticagrelor is superior to aspirin in maintaining the patency of SVG and preventing major cardiovascular events within 1 year after CABG (9,10). However, the optimal DAPT strategy for the patients after CABG has not yet been established.

The aim of this study was to compare the effect of aspirin+ticagrelor or aspirin+clopidogrel on SVG patency and incidence of cardiovascular events within 1 year after CABG.

We present the following article in accordance with the CONSORT reporting checklist (available at http://dx.doi.org/10.21037/jtd-20-3407).

One hundred forty-seven consecutive patients undergoing elective CABG at Changhai Hospital between October 2017 and December 2018 were enrolled in the study (Figure 1). All surgeries were conducted by the same surgeon (Prof. Han). The study was conducted in accordance with the Declaration of Helsinki (as revised in 2013). All data were collected from the Division of Cardiothoracic Surgery under the permission of the Institutional Review Board of Changhai Hospital (Number: CHCS052017). Informed consent was obtained from all patients. 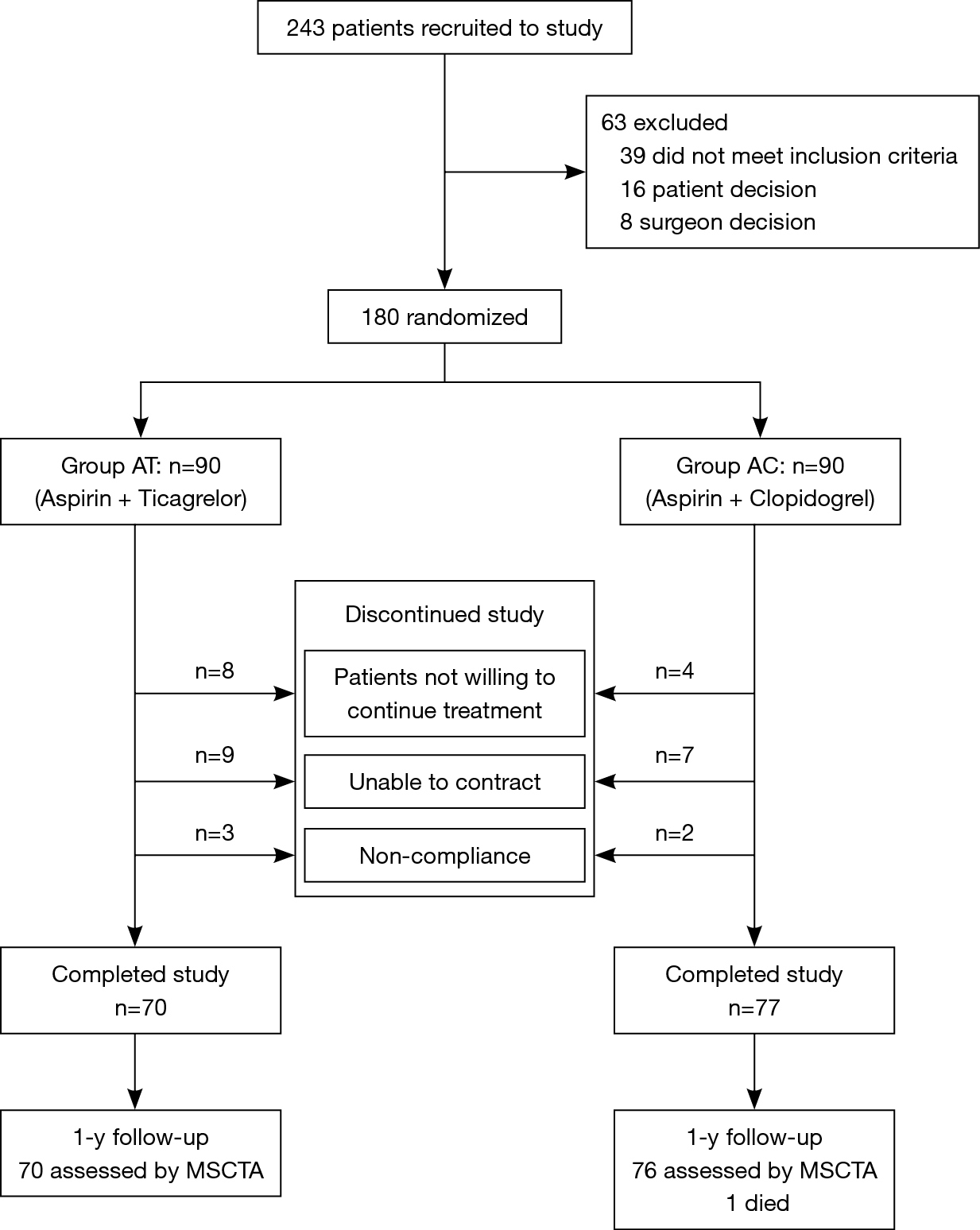 Patients with CABG surgery were randomized into two groups: AT group, receiving aspirin 100 mg/d plus ticagrelor 2×90 mg/d; AC group, receiving aspirin 100 mg/d plus clopidogrel 75 mg/d. Both antiplatelet therapies. All medications were administered within 24 h when clinical stability was ensured. All patients received DAPT for 12 months after CABG.

The incidence of graft occlusion at one year after bypass surgery was assessed by multislice computed tomography angiography (MSCTA), which was the primary endpoint. The occurrence of major adverse cardiac events (MACE) was the secondary endpoint. MACE was recognized if one of the following occurred during treatment: cardiovascular death, nonfatal myocardial infarction, or nonfatal stroke.

Sample size: according to previous studies, aspirin plus Ticagrelor has a venous graft occlusion rate of 13% one year after surgery. As for aspirin plus Clopidogrel, the rate is 3.7%. We found that a 5% difference between 2 arms can be reliably detected under a power of 80%, if we have 170 venous grafts in each arm (significance level =0.05).

All patients underwent either off-pump or on-pump CABG that was performed based on anatomic and clinical findings by a single experienced surgeon. The left internal mammary artery (LIMA) was routinely anastomosed to the left anterior descending artery, and SVG was anastomosed to other target vessels with aorto-coronary or sequential bypass. During the operation, mean flow values (>10 mL/min) were detected with transit-time flow measurement (Medistim Oslo Norway) to confirm the graft patency.

A 64-MSCTA was used to assess the graft patency at 12 months after CABG in all follow-up patients. Two radiologists and a cardiac surgeon independently reviewed the results of MSCTA. Each graft was classified as patent (visible flow, not only at the anastomotic site but also in the main body of the graft), or occluded (a conduit was not filled with contrast at all). Graft patency was defined according to FitzGibbon criteria. Contrast filling of the grafts, anastomoses, and coronary arteries beyond the graft were considered in each assessment. FitzGibbon grade A indicates that the graft is patent with ≤50% stenosis; FitzGibbon grade B indicates that the extent of graft stenosis is >50% but not occluded; and FitzGibbon grade O indicates total occlusion of the graft without contrast filling.

One hundred forty-seven consecutive patients undergoing elective CABG were enrolled, including 70 patients in the AT group and 77 in the AC group. No difference in age, gender, body mass index, history of smoking and hypertension, previous cerebrovascular accident, diabetes, hyperlipidemia, previous myocardial infarction, and previous percutaneous coronary intervention were found between groups (Table 1). In addition, no difference in graft characteristics (including distal anastomosis, graft type, number of grafts) and intraoperative transit-time flow measurement findings were found between AT and AC group (Table 2). 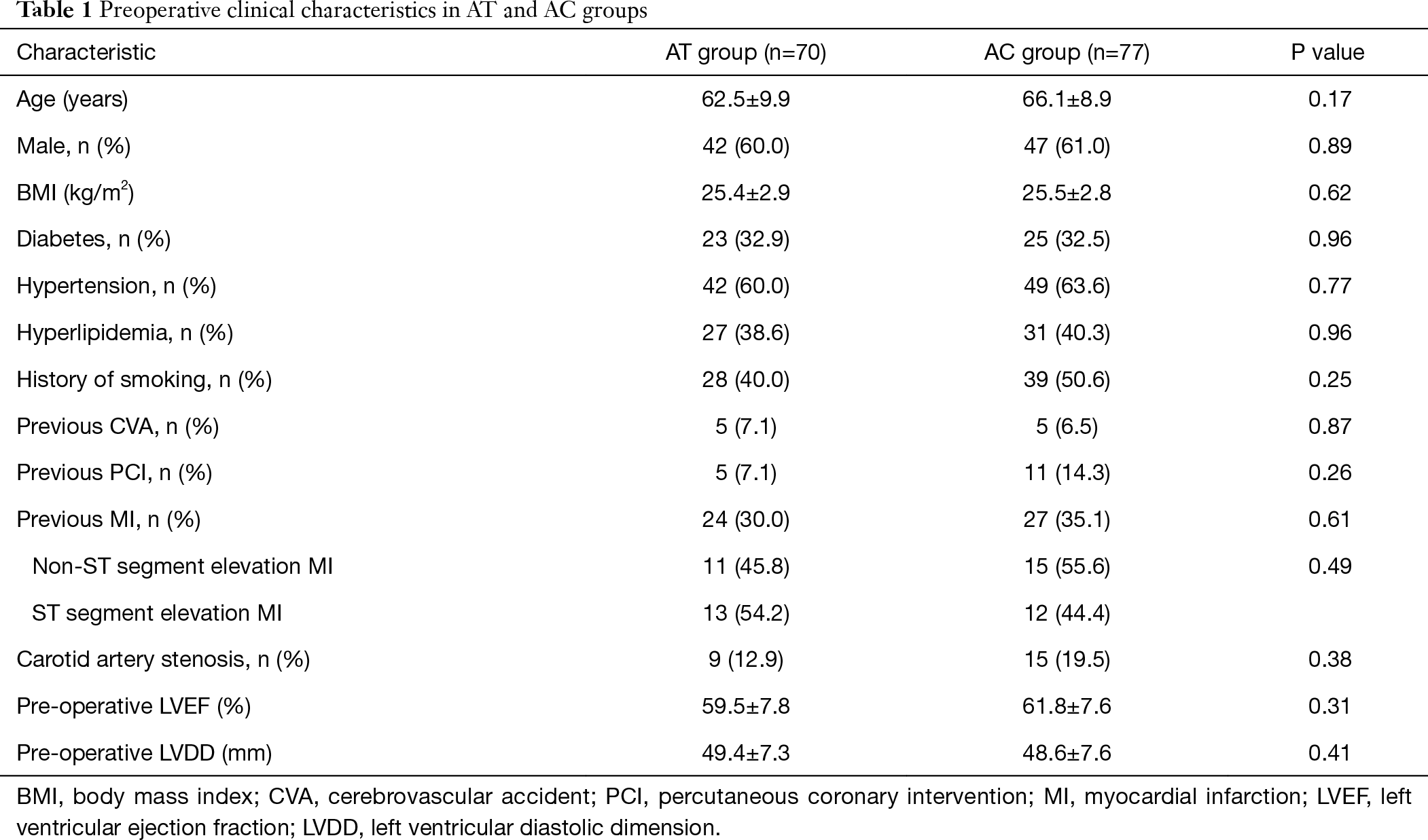 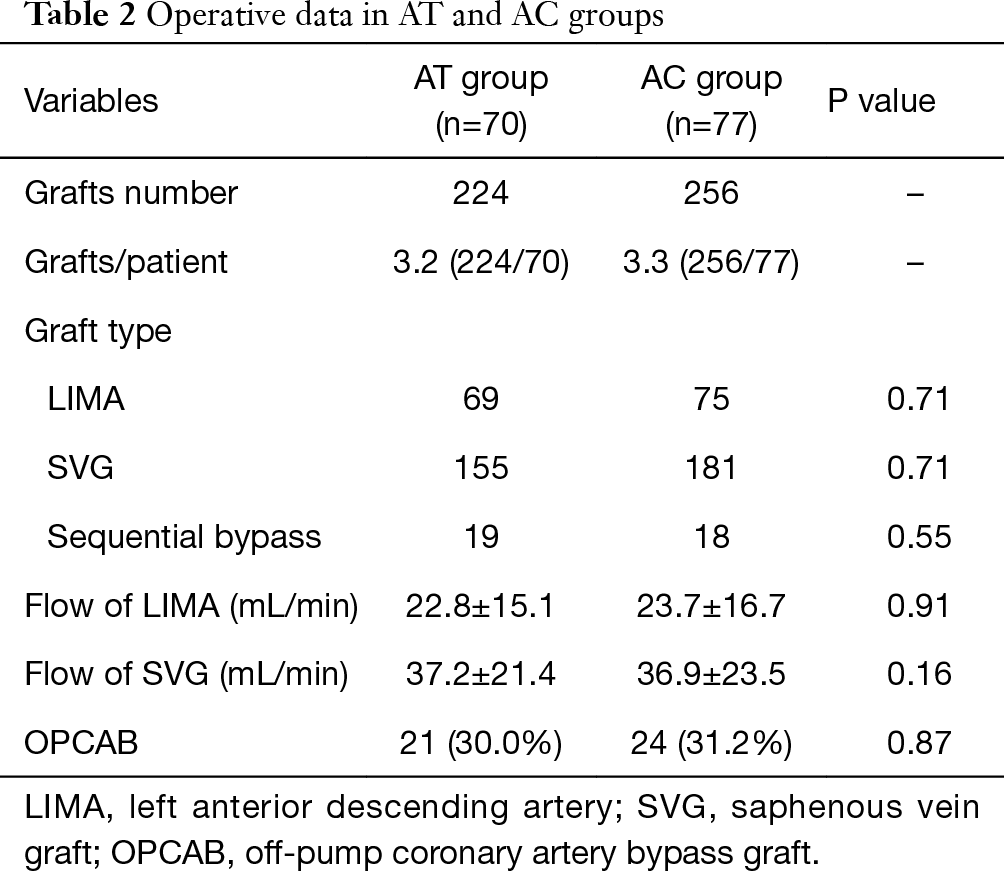 Table 2 Operative data in AT and AC groups
Full table

Among the 147 participants, 1 (0.7%) patient in the AC group died 5 weeks after CABG surgery, due to severe pulmonary infection. All other patients were treated with DAPT for 12 months and underwent 64-MSCTA according to schedule.

A total of 3 MACEs were observed during 1 year of follow-up post-CABG, including 2 (2.9%) in the AT group, and 1 (1.3%) in the AC group (P=0.505). The incidence of recurrent angina was similar in patients treated with aspirin+ticagrelor (4.3%), and those treated with aspirin+clopidogrel (5.2%). There were no significant differences in the incidence of major bleeding and dyspnea during the follow-up time (Table 3). 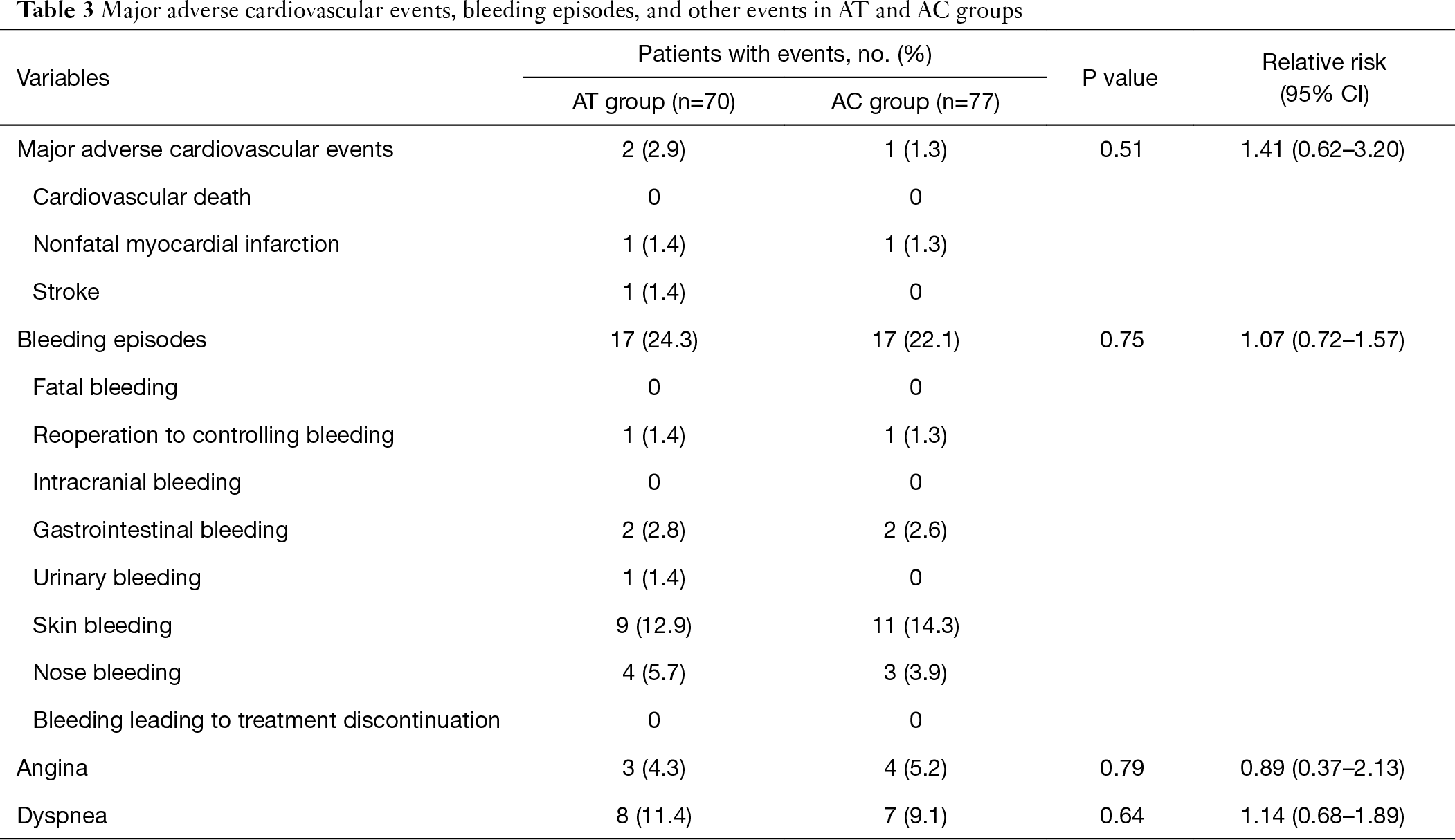 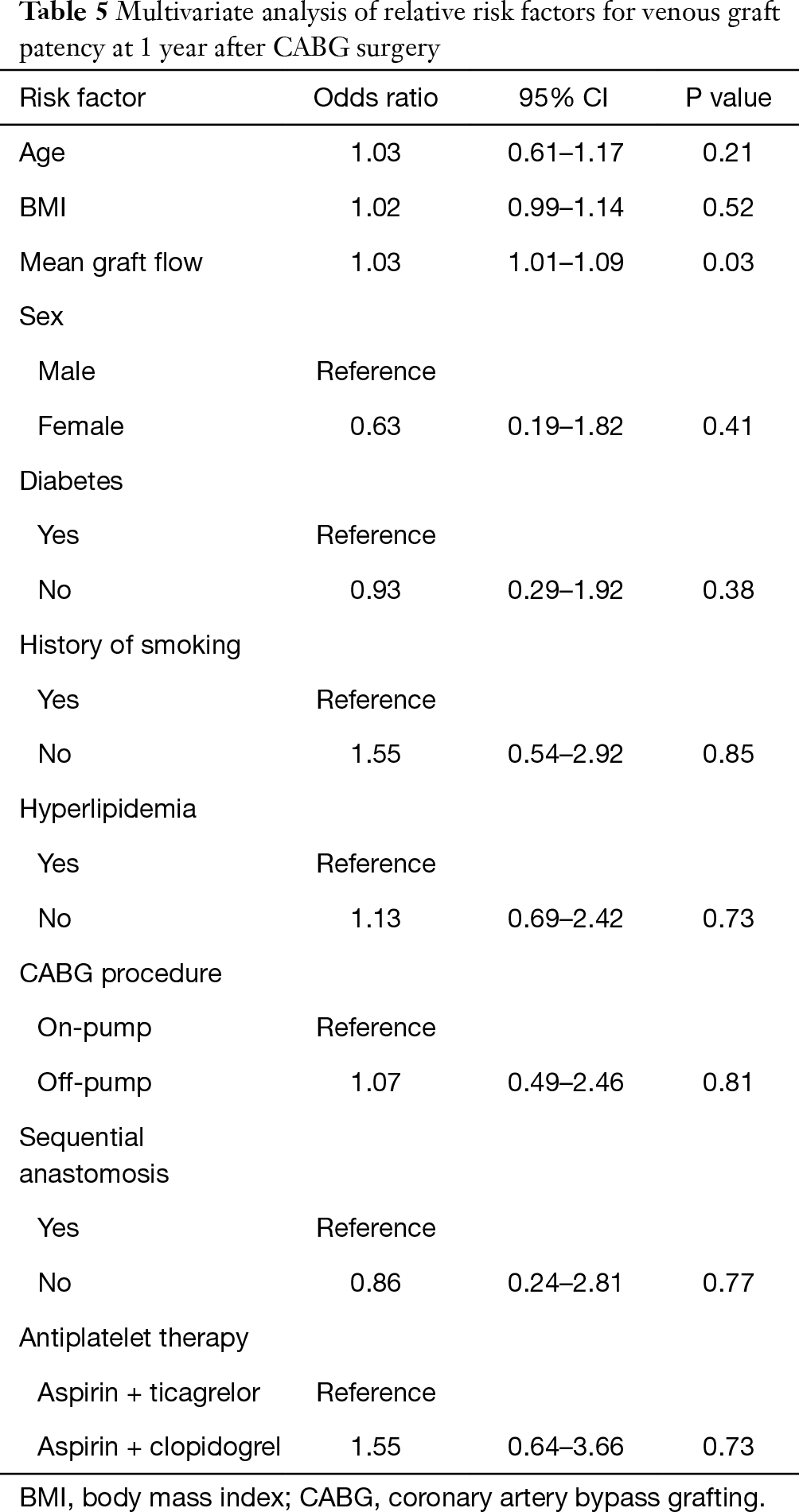 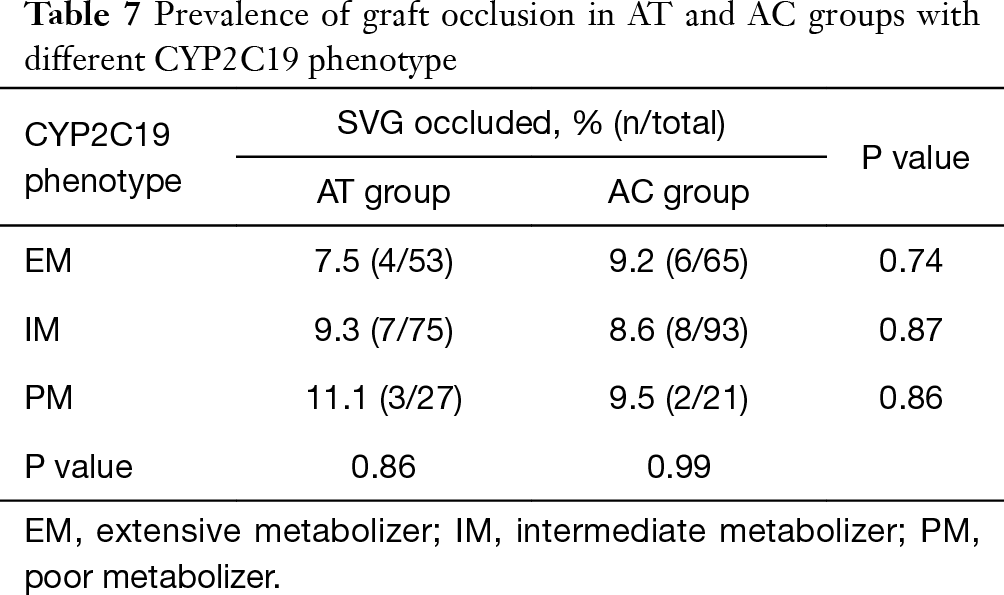 Despite the undoubted success of CABG, early graft failure occurs in approximately 18% of cases. Antiplatelet therapy with aspirin is recommended for patients undergoing CABG since it may improve vein graft patency and reduce the MACE rate. However, even with standard aspirin therapy, a significant number of patients show resistance to aspirin, which results in increased risk for developing adverse cardiovascular events during the first year after CABG (4).

Clopidogrel is a prodrug that is metabolized by cytochrome P450 and can inhibit the diphosphate-induced platelet aggregation, selectively depress platelet cycloxygenase-1, and interrupt the formation of thromboxane A2. Compared with aspirin alone, a combination of clopidogrel and aspirin can lead to superior potent synergistic antithrombotic effects, and can more effectively prevent graft failure and cardiovascular events after CABG (5,6). Despite the overall benefit, some individuals may be less responsive to clopidogrel (7).

Ticagrelor is a promising new antiplatelet drug with higher efficiency compared with clopidogrel in patients with acute coronary syndrome (ACS) (8). Several studies have proved that ticagrelor is superior to aspirin for maintaining the patency of SVG and the prevention of major cardiovascular events within 1 year after CABG (9,10). Yet, the optimal DAPT strategy for the patients after CABG has not been established. To the best of our knowledge, this is the first study that compared the effect of aspirin+ticagrelor or aspirin+clopidogrel on SVG patency and incidence of cardiovascular events within one year after CABG. The results showed that both aspirin plus ticagrelor, or aspirin plus clopidogrel could maintain high graft patency in the early postoperative phase after CABG.

CYP2C19 loss-of-function has been associated with a high risk of major cardiovascular events in patients with coronary heart disease and those who received percutaneous intervention. However, a large meta-analysis suggested an association between the CYP2C19 genotype and clopidogrel responsiveness, but there was no significant association of genotype with cardiovascular events (11). Cayla et al. reported that the level of platelet reactivity is not always correlated with clinical outcomes in patients with ACS after coronary stenting (12). Moreover, Li et al. found that genetic variants related to clopidogrel metabolizing pathway had no effect one-year cardiovascular events in Chinese patients undergoing percutaneous coronary intervention (13). In our study, we also analyzed the association between the CYP2C19 genotype and DAPT responsiveness. We found no significant association of genotypes with graft patency during the 1st year after elective CABG surgery. This could be due to our relatively small sample size. Further studies are needed to determine whether the significant benefits in graft patency exist in patients with different CYP2C19 genotypes.

The incidence of MACE was low in the two groups after 1-year follow-up. Moreover, there were few major bleeding episodes and there was no significant difference between the aspirin + ticagrelor group and the aspirin+clopidogrel group. Moreover, skin bleeding occurred more frequently in patients treated with combination therapy, which is consistent with previous studies of DAPT in a variety of settings (8,9).

This was a single-center study that did not include the placebo control group. Additionally, although we tested variants of the CYP2C19 gene, still many other genes may be associated with clopidogrel response. In our study, there was no significant difference in graft patency among different CYP2C19 genotypes, probably due to the relatively small sample size. Consequently, a larger sample size might be warranted to reveal the effectiveness of different dual antiplatelet therapies on the clinical outcomes in patients with different CYP2C19 genotypes.

Both aspirin plus ticagrelor, and aspirin plus clopidogrel can maintain a fairly high graft patency rate in the early phase after CABG surgery. Also, there were no significant differences in the incidence of MACE and major bleeding. CYP2C19 genotypes may have no obvious effect on graft patency during the 1 year after CABG surgery. Yet, a larger sample size study is required to confirm these findings.

Funding: The study was supported by the National Natural Science Foundation of China, Beijing, China (Grant No. 81870344).

Reporting Checklist: The authors have completed the CONSORT reporting checklist. Available at http://dx.doi.org/10.21037/jtd-20-3407

Conflicts of Interest: All authors have completed the ICMJE uniform disclosure form (available at http://dx.doi.org/10.21037/jtd-20-3407). The authors have no conflicts of interest to declare.

Ethical Statement: The authors are accountable for all aspects of the work in ensuring that questions related to the accuracy or integrity of any part of the work are appropriately investigated and resolved. The study was conducted in accordance with the Declaration of Helsinki (as revised in 2013). The study was approved by the Institutional Review Board of Changhai Hospital (Number: CHCS052017). Informed consent was obtained from all patients.