Present guidelines recommend the timely reperfusion therapy for patients with acute myocardial infarction (AMI) to prevent or minimize ischemic complications with antithrombotic medications and/or catheter-based interventions (1,2). The anatomy and blood supply to the coronary artery in patients who had prior coronary artery bypass grafting (CABG) became more complex, when compared to patients without bypass history. It is more difficult to accurately judge culprit vessels in the setting of an emergency angiography, while bypass grafts often play a role. The culprit vessel was identiﬁed according to the comprehensive judgement by electrocardiographic ﬁndings, current coronary angiograms, and previous bypass angiograms if available. The present study aimed to analyze the primary PCI success rate and in-hospital outcome of patients with prior CABG. The hypothesis was that patients who receive primary PCI with AMI and prior CABG have poor clinical outcomes.

We present the following article in accordance with the STROBE reporting checklist (available at http://dx.doi.org/10.21037/jtd-20-1813).

This was a retrospective study. From January 2011 to December 2018, 3,685 patients received primary coronary angiography in the setting of AMI at Heart Center Beijing of Chaoyang Hospital, including ST-elevation myocardial infarction (STEMI, n=2,587) and non-ST-elevation myocardial infarction (NSTEMI, n=1,098), The data of 78 cases with prior CABG (study group) in 3,685 were retrospectively analyzed. The same number of patients well-matched in spectrum of AMI and three-vessel diseases were selected by random number generator from the same pool as control (control group).

All patients in the study group received successful CABG at least 1 month before the target AMI. The emergency angiography was performed within 12 hours from the onset of STEMI and within 72 hours of NSTEMI. The diagnostic criteria followed the 2017 ESC Guidelines for the management of AMI in patients presenting with ST-segment elevation and the 2015 ESC Guidelines for the management of acute coronary syndromes in patients without persistent ST-segment elevation (1,2). STEMI was deﬁned as acute myocardial ischemia with cardiac troponin I (cTnI) levels >0.5 ng/mL (10-fold of the upper limit of normal) and signiﬁcant ST-segment elevation (>0.2 mV in two adjacent chest leads and/or >0.1 mV in two adjacent limb leads), or a new left bundle branch block in the electrocardiogram (ECG). NSTEMI was deﬁned as acute myocardial ischemia with cTnI >0.5 ng/mL in the absence of signiﬁcant ST-segment elevation. Patients were excluded from the analysis when myocardial infarction (MI) occurred during the perioperative period after the CABG, or the clinical record data was not available completely.

Inclusion criteria: (I) patients were diagnosed with AMI as definition at admission; (II) age >18 years old; (III) had received emergency coronary angiography within 12 hours from the onset of STEMI and 72 hours of NSTEMI. Extra Inclusion criteria in study group: (I) patients who had received CABG at least 1 month before the target AMI; (II) with negative CABG relevant serum cardiac biomarkers.

Exclusion criteria: (I) patients were excluded from the analysis when the MI occurred during the perioperative period after the CABG; (II) with incomplete clinical record data to analyze.

Primary PCI success was defined as a restoration of thrombolysis in myocardial infarction (TIMI) 3 blood flow of the culprit vessels combined with symptom relief and the resolution in ST segment in the ECG through coronary angiography procedure and survived to discharge.

In the present study, the main observational indicators included the medical history of each patient’s hospitalization and their previous CABG surgery records. These records were combined with enhanced coronary arterial computed tomography (CT) imaging to identify the number, site and patency of bypass bridges. Furthermore, the present study analyzed the procedures of emergent angiography and PCI, the symptom relief after intervention, and the changes in ST segment in the ECG, left ventricular ejection fraction (LVEF) by echocardiography, and the peak values of serum cTnI and B-type brain peptide (BNP) during the hospitalization. The clinical follow-up was conducted by telephone or outpatient service.

The study was conducted in accordance with the Declaration of Helsinki (as revised in 2013). The study was approved by The Ethics Committee of the Beijing Chaoyang Hospital approved this study (the study approval number (NO.: 2019-scientific-5-1) and individual consent for this retrospective analysis was waived.

The emergency catheterization procedure was performed according to standard techniques. All patients received 80–100 IU of unfractionated heparin before the primary PCI. Basal angiography was obtained in different angiographic views to observe the native coronary arteries and bypass grafts. If necessary, pig-tail catheters were used to detect the bypass grafts.

The statistical analysis was performed using SPSS 22.0 (IBM SPSS Statistics; IBM Corporation, Armonk, New York, USA). Normally distributed continuous variables were expressed as mean ± standard deviation, non-normally distributed continuous variables were expressed in median [interquartile range (IQR)], and the categorical variables were expressed in frequency [percentage (%)]. Kolmogorove-Smirnov tests were performed to test the parametric distribution. Either t-test for unpaired samples (parametric distribution), or Manne-Whitney U-test (non-parametric distribution) were performed to test the statistical differences between the two groups, and compare the continuous variables. For categorical variables, chi-square or Fisher’s exact test were carried out to test for signiﬁcant differences. Multivariate conditional logistic regression models were constructed to test the association between PCI success rate and the prior CABG. All variables were compared using a bilateral test, with P<0.05 considered statistically significant.

A total of 119 cases with prior CABG were screened. Seventy-eight of 119 cases who achieved the criteria were included, while 41 cases were excluded. Among 41 cases, 20 did not receive emergency coronary angiography within the defined time, 12 did not perform coronary angiography during the hospitalization, and 9 had incomplete clinical or coronary angiographic data for analyzing (Figure 1). Among the included 78 patients, 48 patients had STEMI and 30 patients had NSTEMI. The span from CABG to the index AMI ranged within 1–241 months, with an average of 112.9 months.

In the control group, 78 cases presented with AMI and three-vessel disease, 48 with STEMI and 30 with NSTEMI, without a history of CABG were treated by primary coronary angiographic procedure during the same period as study group.

The study group had more incidence of cardiogenic shock, intra-aortic balloon pump (IABP) implantation as well as in-hospital death than the control group, and longer hospital stay. The characteristics and clinical variables are presented in Table 1. 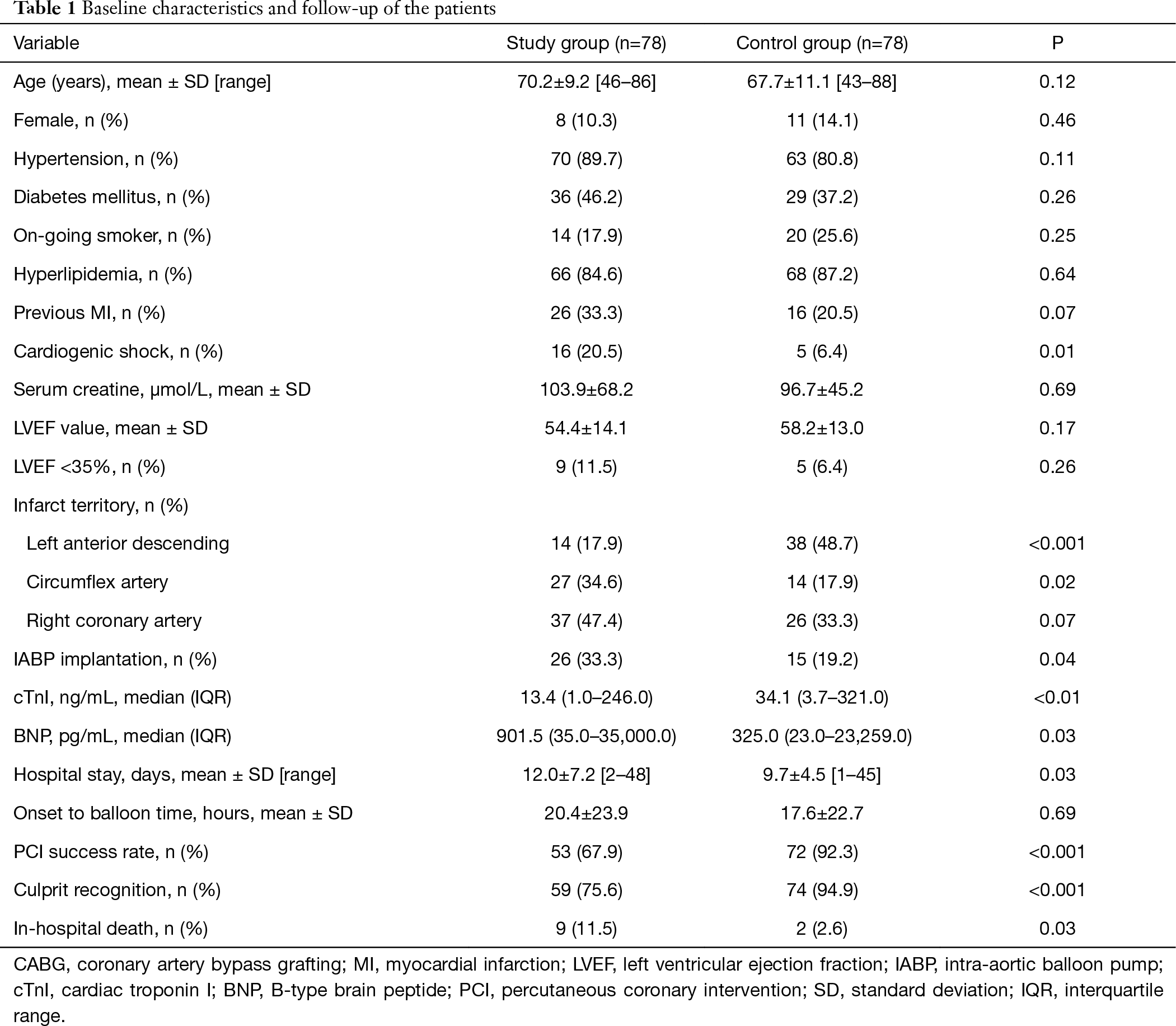 All cases in the study group were performed primary angiography through femoral arterial access: 43 patients from the right and 9 from the left femoral access, 26 from the bilateral femoral access with IABP implantation.

In 30 patients, a drug-eluting stent (DES) was implanted in the culprit lesions.11 patients were treated with drug-coated balloon (DCB) after percutaneous transluminal coronary angioplasty (PTCA) was performed with. In 15 patients, the culprit vessels restored the TIMI 3 flow through PTCA. Thrombus aspiration were performed in 11 patients. Four of 11 suctions of the native coronary artery were performed, and another seven suctions of the bypass grafts were performed, which included one suction using an AngioJet catheter. One patient survived the gastrointestinal bleeding after a transfusion treatment. The subgroup analysis revealed that the STEMI group had a shorter onset to balloon time and more recognition of the culprit, when compared to the NSTEMI group. However, these shared the same in-hospital mortality with each other. It was considered that the STEMI group had a larger MI territory and the worse cardiac function, as indicated by the higher serum concentration of cTnI and BNP (Table 2). 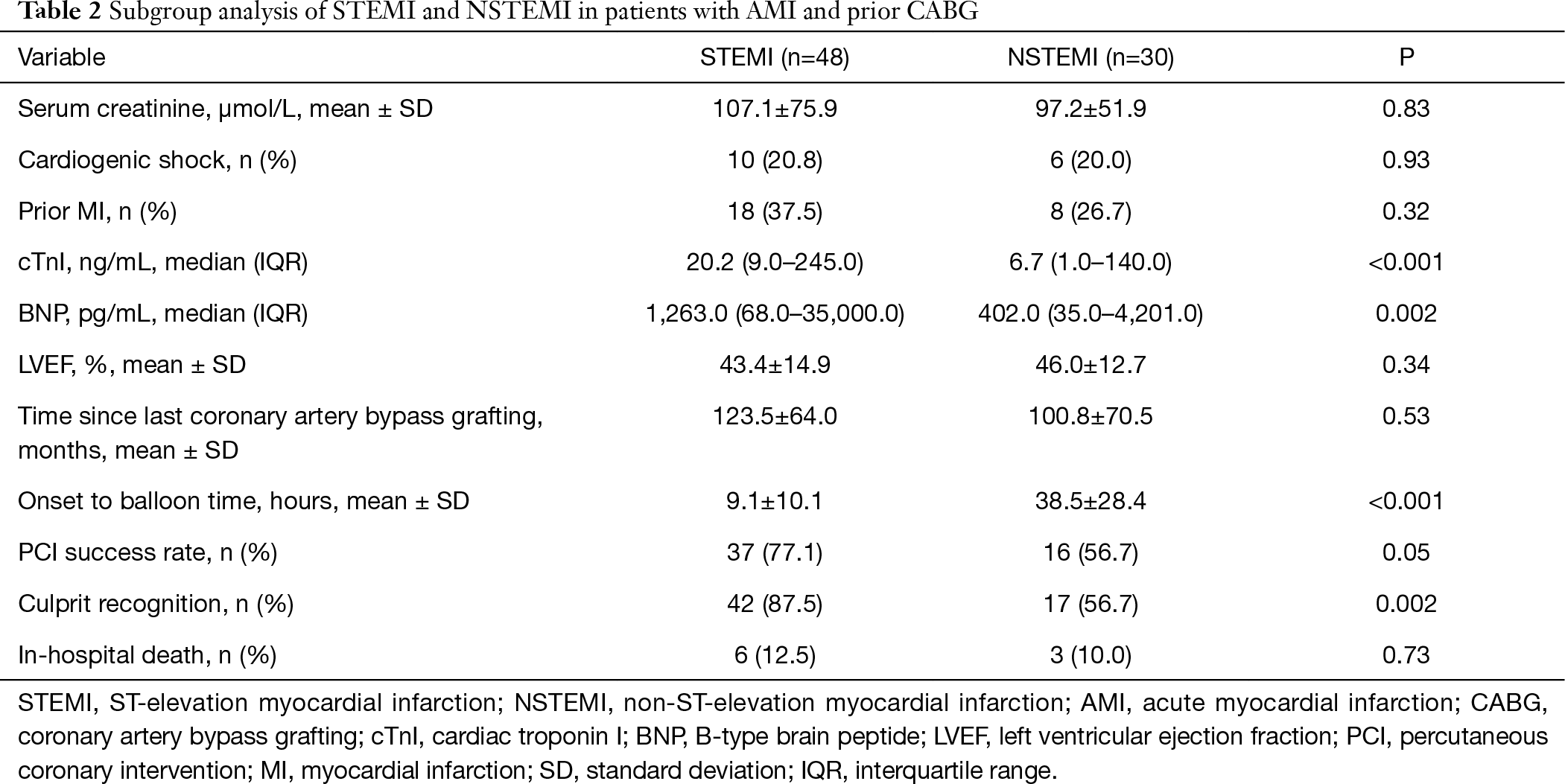 In the control group, 75 cases were performed primary angiography through right radial arterial access, 3 from the right femoral access.

The culprit lesion in patients with prior CABG

In the study group, more culprit vessels were the SVG-RCA grafts and RCA (band together 38.5%), producing more inferior wall attacks than other territory (Figure 2). In the 48 patients who presented with STEMI, the inferior wall infarction ratio was significantly higher than the anterior wall infarction ratio (56.3% vs. 16.7%, P<0.001). The pie chart presents a description of the distribution of the infarct site (Figure 3). 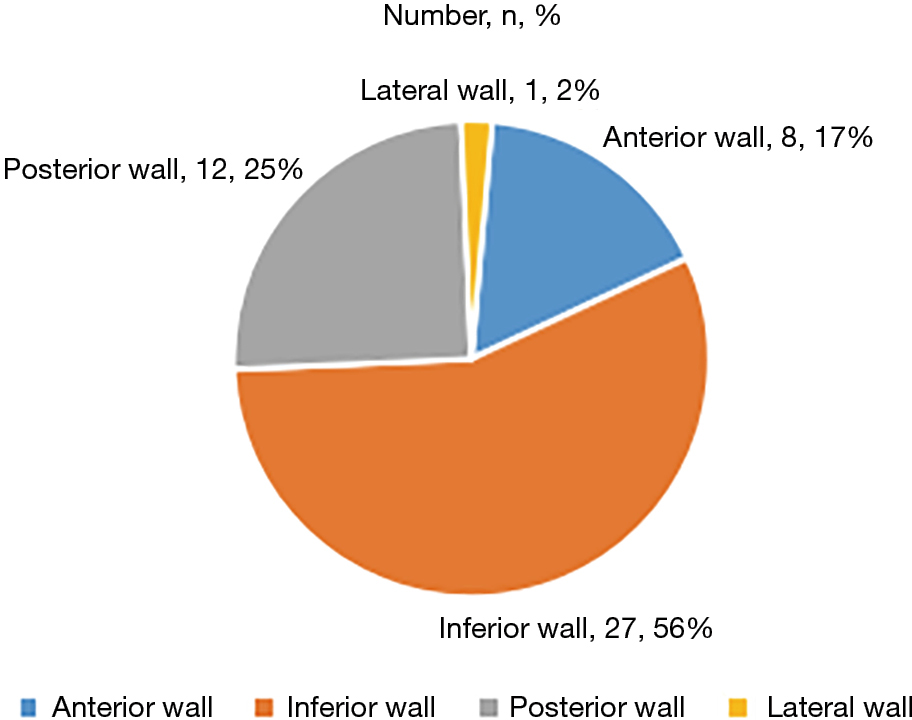 In the control group, the culprit vessels were identified in all cases. LAD territory attack was seen more often than other territory (Table 1).

The relationship between PCI success rate and the prior CABG 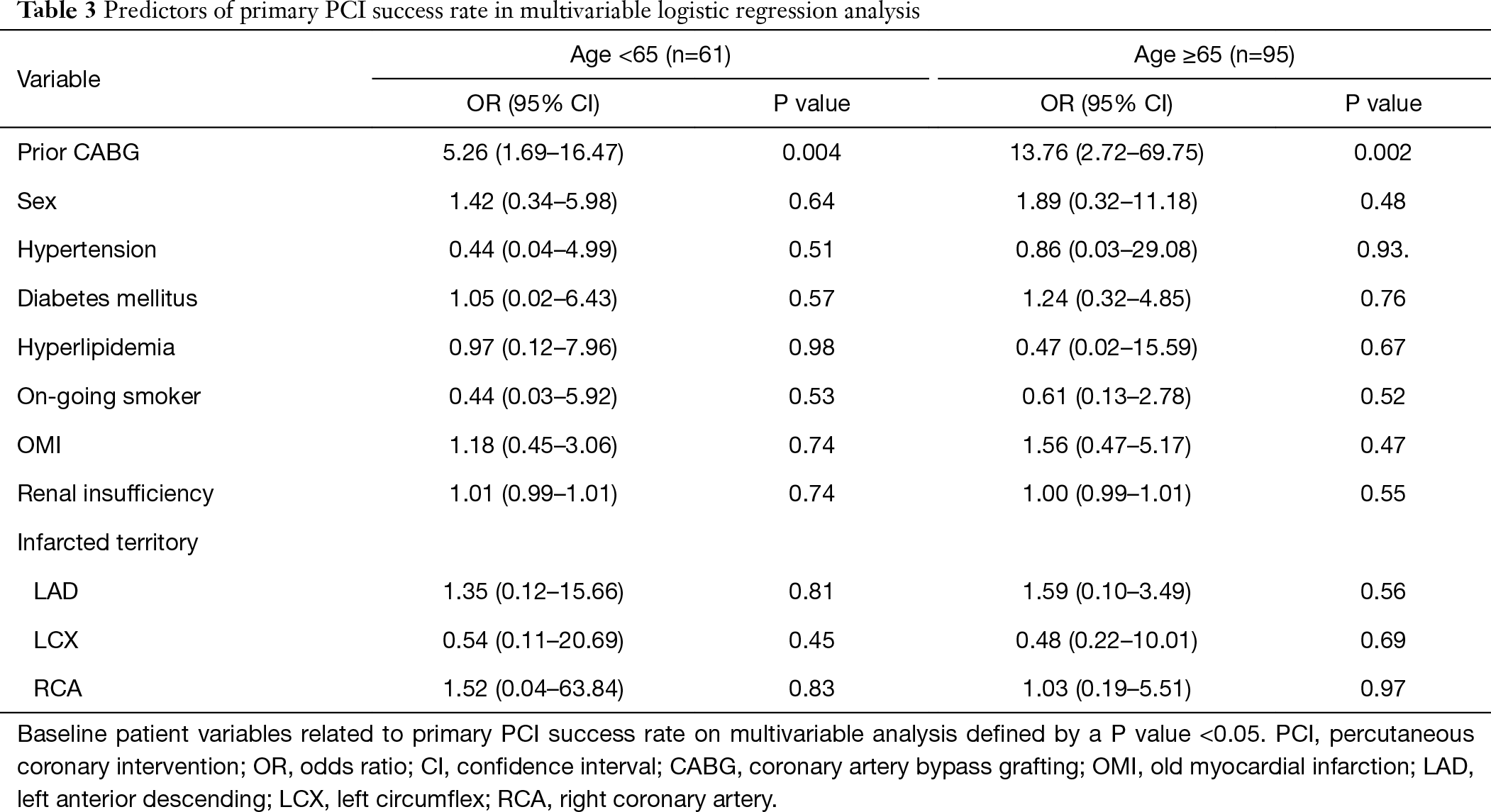 Reporting Checklist: The authors have completed the STROBE reporting checklist. Available at http://dx.doi.org/10.21037/jtd-20-1813

Conflicts of Interest: All authors have completed the ICMJE uniform disclosure form (available at http://dx.doi.org/10.21037/jtd-20-1813). The authors have no conflicts of interest to declare.

Ethical Statement: The authors are accountable for all aspects of the work in ensuring that questions related to the accuracy or integrity of any part of the work are appropriately investigated and resolved. The study was conducted in accordance with the Declaration of Helsinki (as revised in 2013). The study was approved by The Ethics Committee of the Beijing Chaoyang Hospital approved this study (the study approval number (NO.: 2019-scientific-5-1) and individual consent for this retrospective analysis was waived.