Serum creatinine as a predictor of mortality in patients readmitted to the intensive care unit after cardiac surgery: a retrospective cohort study in China

Cardiac surgery is a relatively routine procedure in many countries; however, it remains a complex and risky procedure (1,2). Worldwide, nearly 100 million patients undergo cardiac surgery each year, and most require postoperative care in the intensive care unit (ICU) until they stabilize (3,4). However, some patients deteriorate after being transferred to the general ward, eventually resulting in unplanned ICU readmission. On average, 7.8% of patients are readmitted to the ICU after cardiac surgery, and ICU readmission is associated with a higher risk of morbidity, mortality, and incremental health care costs (5-8). However, previous studies mainly focused on the etiology and risk factors for readmission, and the prognostic factors of patients readmitted to the ICU after cardiac surgery remain unclear owing to limited data. Understanding the prognostic factors of in-hospital mortality after ICU readmission would help inform clinicians and improve the treatment outcomes of cardiac surgery in patients who deteriorate postoperatively.

We present the following article in accordance with the STROBE reporting checklist (available at http://dx.doi.org/10.21037/jtd-20-3205).

This was a retrospective cohort study of patients who underwent cardiac surgery between January 1, 2018, and December 31, 2019, in Zhongshan Hospital, Shanghai, China and were readmitted to the ICU at least once during their hospitalization. We defined ICU readmission as the second or subsequent ICU admission of a patient due to deterioration of clinical status and vital signs that warranted advanced monitoring and therapy. Patients younger than 18 years were excluded.

The patients received standard anesthesia and cardiac surgical procedures and were thereafter directly admitted to the ICU for postoperative management. A team of intensivists, nurses, and respiratory therapists managed the patients during their ICU stay. The ICU nurse-patient ratio is 1:2 during the daytime and 1:3 at night time. Intensivists decided to transfer patients out of the ICU based on the patients’ general conditions and laboratory results. Meanwhile, the cardiac surgeon made decisions about the need for ICU readmission from the general ward. For patients who were readmitted to the ICU more than once during a single hospitalization, the data of the last readmission were included in the analysis.

The study was conducted in accordance with the Declaration of Helsinki (as revised in 2013). The study was approved by the Ethical Committee of Zhongshan hospital, Fudan University (B2019-075R), and individual consent for this retrospective analysis was waived.

The primary study endpoint was all-cause in-hospital mortality. Continuous variables were expressed as the mean and standard deviation (SD) or median and interquartile range (IQR), depending on the nature and distribution of the variables. Categorical variables were expressed as frequency counts with percentages. Continuous variables were compared using the Wilcoxon rank-sum test or Student’s independent t-test, as appropriate, whereas categorical variables were compared using the chi-square test or Fisher’s exact test. Logistic regression models were used to investigate the relationship between renal function indicators and mortality in univariable and multivariable analyses. We established unadjusted, moderately adjusted, and fully adjusted models. In the moderately adjusted models, SCR, eGFR, ∆SCR, and ∆eGFR at the time of ICU readmission were individually entered and adjusted for lactic acid, and infection. In the fully adjusted models, they were adjusted for age, sex, BMI, NYHA functional classification, Euro score, APACHE II scores, aortic surgery, AST, ALT, lactic acid, and infection.

Restricted cubic spline curves with four knots (5%, 35%, 65%, 95%) were used to determine the association between creatinine and death. We further applied a two-piecewise multivariable logistic regression model to examine the threshold effect of creatinine on death according to the smooth curve fitting. Using a tail and error, we determined the threshold level (i.e., turning point) of creatinine at which the relationship between creatinine and death began to change and became notable. The trial inflection point was moved along a pre-defined interval and detected the inflection point that gave the maximum model likelihood. This method was also used for eGFR, ∆SCR, and ∆eGFR. We also tested for potential non-linearity by using a likelihood ratio test, comparing the model with only a linear term against the model with linear and cubic spline terms. Results of the logistic regression model were presented as odds ratios (ORs) and 95% confidence intervals (CIs). All statistical analyses were performed using SPSS version 22.0 (IBM, New York, NY, USA) and R statistical software (R, version 3.5.1; R Project). Statistical significance was defined as P<0.05.

Among the 9,747 consecutive adult patients (age ≥18 years) who underwent cardiac surgery, 184 patients (1.89%) were readmitted to the ICU at least once and were evaluated. Of the 184 patients, 30 patients (16.30%) died during hospitalization. The patient characteristics according to survival status are shown in Table 1. There were no significant differences in age, sex, BMI, LVEF, hypertension, diabetes, CKD, history of cardiac surgery, SCR, and eGFR between the two groups (all P>0.05). However, an increased hazard of death was observed in patients who underwent aortic surgery and who had higher Euro and APACHE II scores and elevated levels of AST, ALT, and lactic acid. SCR, eGFR, ΔSCR, and ΔeGFR at the time of ICU readmission were also significantly associated with in-hospital mortality (Table 1). 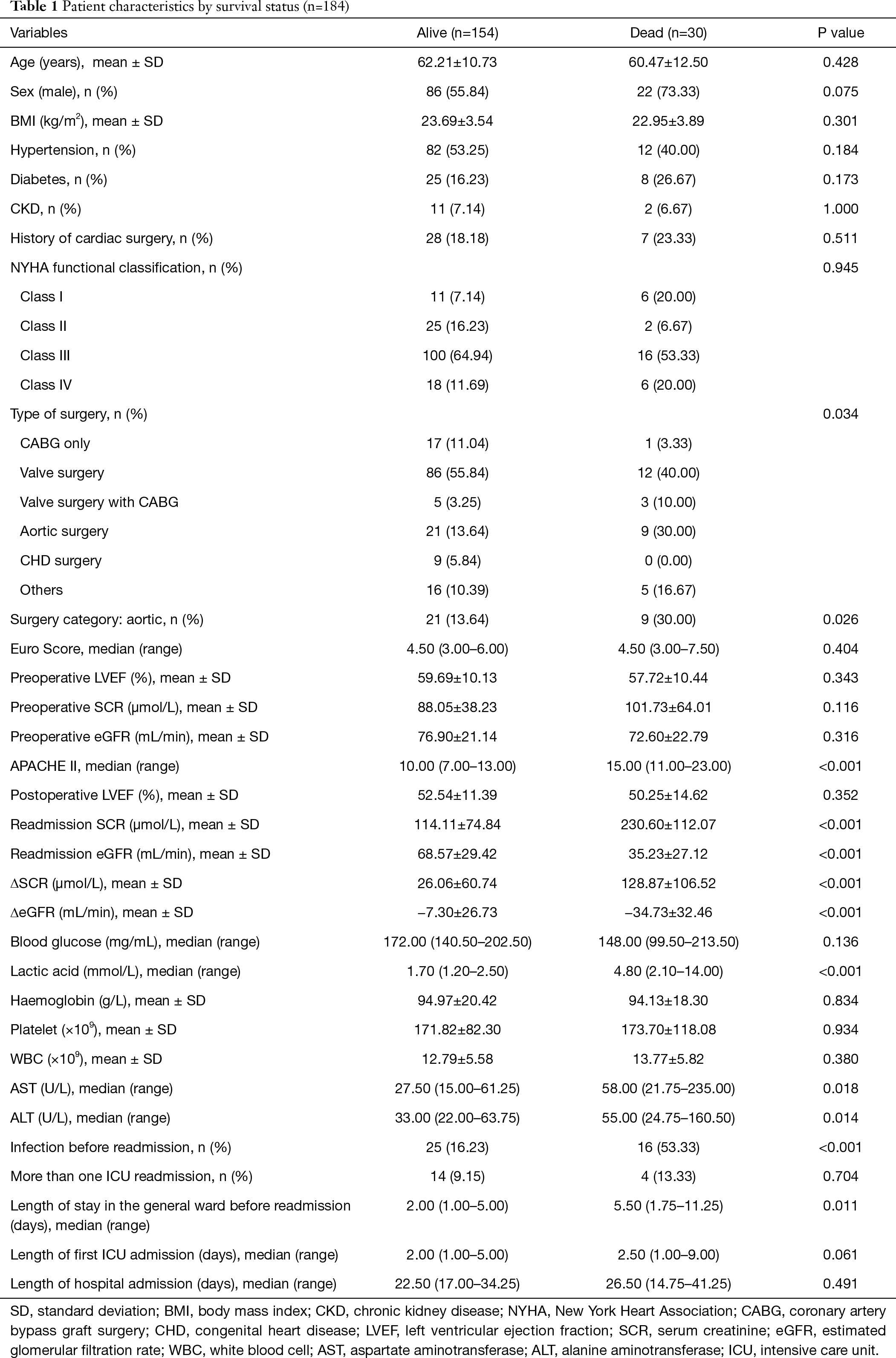 Cardiac dysfunction (n=84, 45.65%) and respiration disorder (n=51, 27.72%) were the most common reasons for ICU readmission. The other reasons were neurological problems, acute renal failure, infection, cardiac tamponade, or bleeding. The causes of readmission are shown in Table 2. 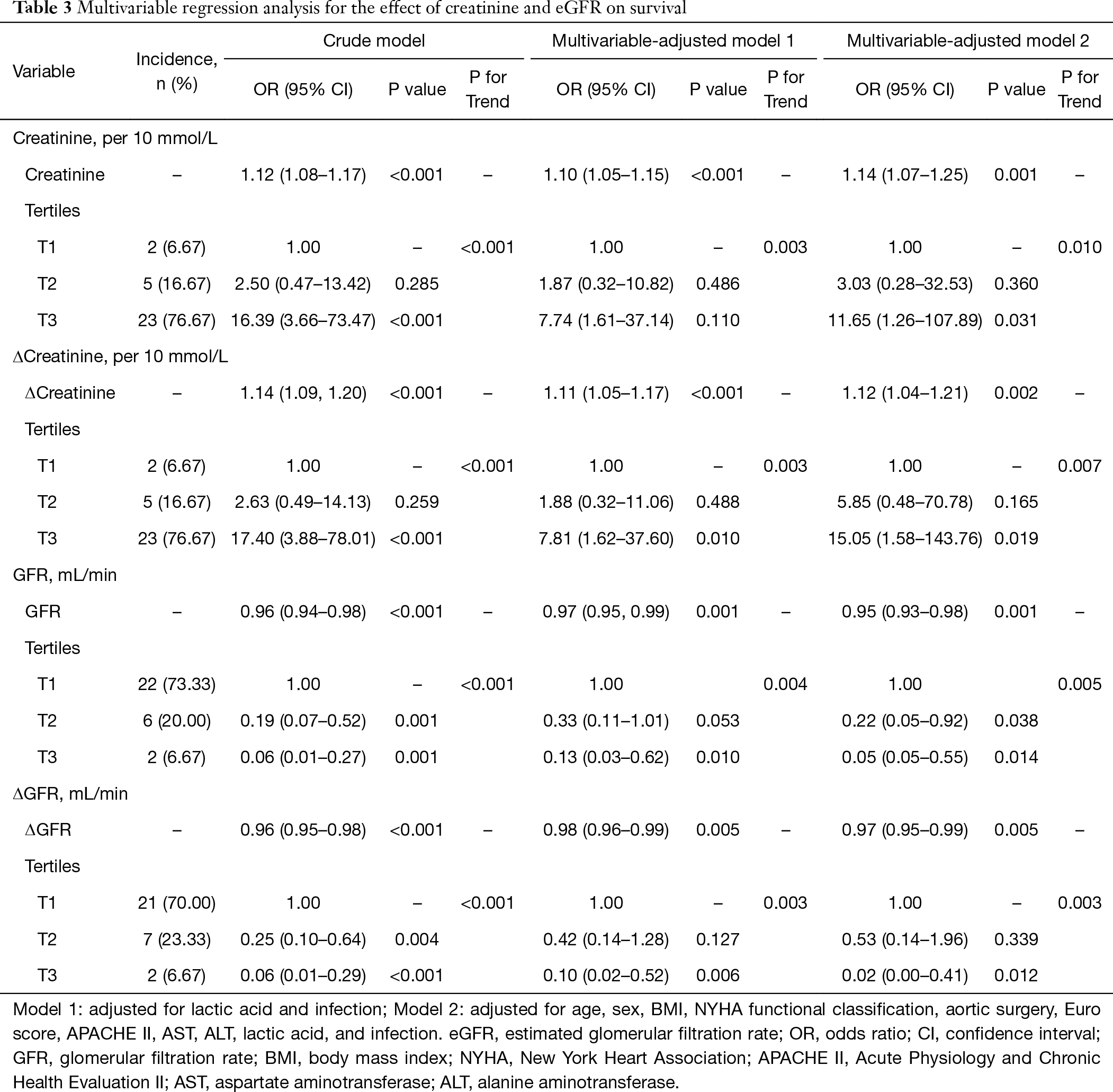 Four smooth curves were fitted, and the relationship between SCR, eGFR, ΔSCR, and ΔeGFR with in-hospital mortality was assessed. The result showed that SCR, eGFR, ΔSCR, and ΔeGFR were linearly related to in-hospital mortality after comparing the model with the non-linear predictor and linear predictor by likelihood ratio test (P for linearity <0.05, P for non-linearity ˃0.05) (Figure 1). 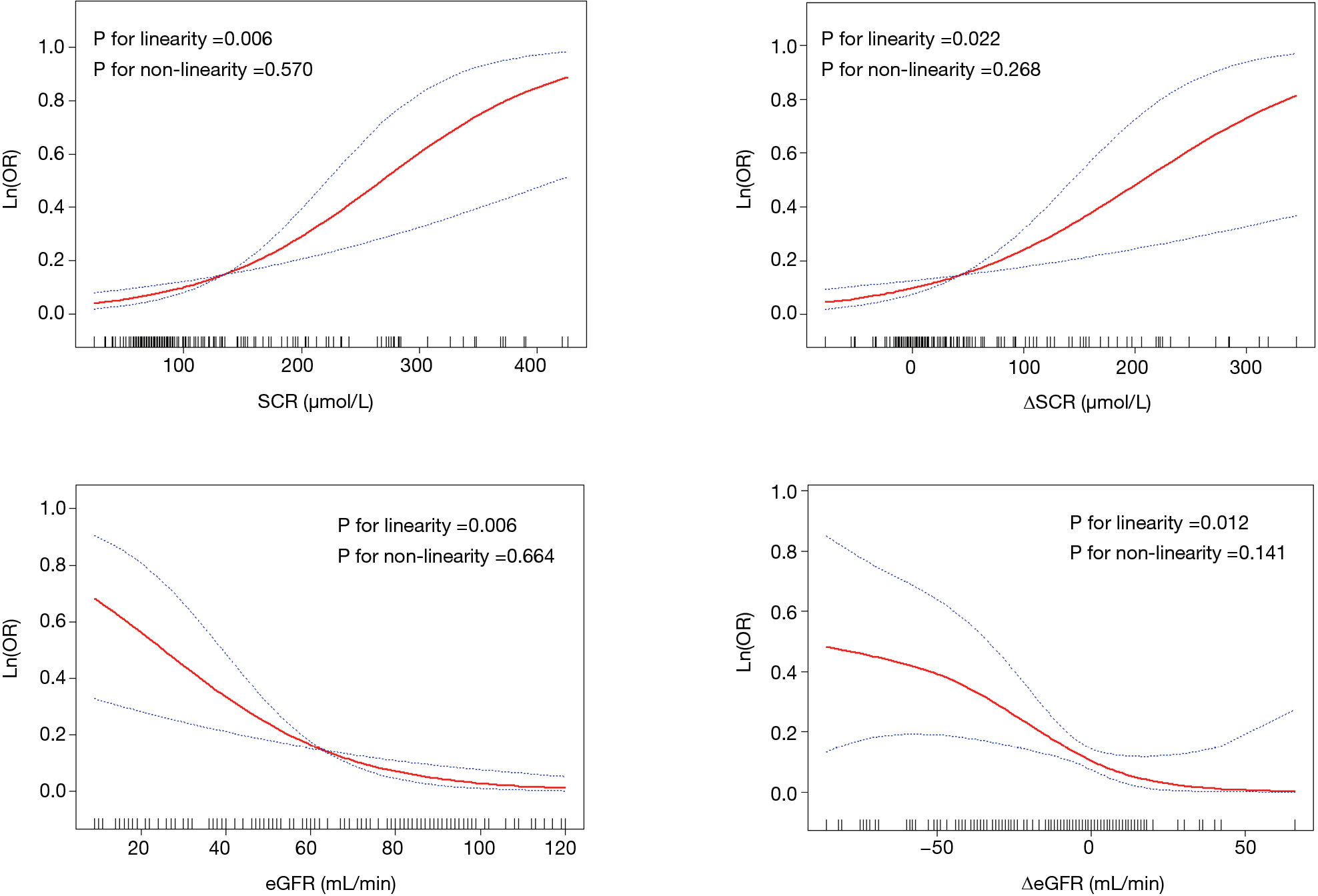 A retrospective analysis of 10,992 consecutive adult cardiac surgery patients found a 23.9% in-hospital mortality rate for patients readmitted to the ICU for any cause (15). A multi-center study also reported a 5-fold higher rate of in-hospital mortality in patients readmitted to the ICU as compared to those who were not readmitted (20.7% vs. 4.4%) (16). In another retrospective observational cohort study, the in-hospital mortality rate was 6.5% in readmitted patients, and the late mortality rate was significantly higher in the readmission group than that of the non-readmission group (22.2% vs. 3.2%, P<0.001) (17). The different mortality rates reported in these studies may be related to the different standards of ICU readmission and the proportion of complex operations. In the present study, the primary causes of ICU readmission were respiratory disorders and cardiac dysfunction, consistent with the findings of many previous studies (7,17-19). Respiratory and circulatory failure are common complications after cardiac surgery. The changes in vital signs are also the first and most observable signs in patients with deterioration.

The etiology and risk factors for ICU readmission are well described in the literature. However, the determinants of patient mortality after readmission have not been described due to the limitations of the sample size. In this study, decreased renal function was strongly associated with in-hospital death among patients who were readmitted to the ICU. The risk of death increased by 0.14-fold for every 10 mmol/L increase in SCR. Similar results were obtained after calculating the eGFR using the creatinine-based CKD-EPI equation. SCR is important for the assessment of renal function and the prediction of the risk of mortality after cardiac surgery. Studies in the last 20 years suggested that decreased renal function was associated with poor prognosis in both cardiac and noncardiac surgery patients (20-22). However, these studies did not separately evaluate the patients who were readmitted to the ICU.

Through the analysis of ∆SCR and ∆eGFR, we found that the variation in SCR and eGFR is also strongly associated with in-hospital mortality regardless of the level of preoperative renal function. No patient with an ∆eGFR >0 died. These findings further suggest that secondary renal injury after cardiac surgery is an important risk factor for death in ICU re-admission patients.

There are several possible explanations for the results of the study. First, more than 70% of the patients in our study were readmitted to the ICU due to cardiopulmonary insufficiency, which may result in a series of physiological changes. Acute kidney injury (AKI) developed after cardiac surgery was also labeled as acute cardiorenal syndrome type I (CRS-I) (23). The occurrence of CRS-I in cardiac surgical patients often indicated the worsening of cardiac function. Second, previous studies have demonstrated that patients with CRS-I after cardiac surgery had a higher risk of mortality (24). Increased level of SCR could be the surrogate marker of many fatal complications such as peri-operative blood loss, acute coronary syndrome, acute heart failure, prolonged period on cardiopulmonary bypass, or postoperative infections. All these events can result in additional deterioration of kidney function, and some of these are strongly associated with postoperative mortality. Third, AKI can further worsen cardiac function and form a vicious circle. The fluid overload caused by the decrease of renal function will increase the volume of circulating blood and make venous and pulmonary circulation congestive, which further aggravates the symptoms of congestive heart failure in these patients (25). In summary, an increased level of SCR represents a more severe cardiac decompensation in patients readmitted to the ICU after cardiac surgery, and thus predicts in-hospital mortality.

The present study is a single-center retrospective study based on consecutive data from a large tertiary cardiac surgery center in China. There were very few missing data and cases excluded from the analysis. However, some limitations of the study should be addressed. First, we controlled potential confounders to the best of our ability, yet residual confounding by other unmeasured or unknown factors might still exist. Second, the small sample size of the death event may result in overfitting. This would bias results toward the null and result in an underestimation of the association between creatinine and death. The readmission to the ICU was a rare event. To our limited knowledge, this study has the largest sample size of cardiac surgery patients readmitted to the ICU in China. Third, AKI classification was not included in the analysis because patients were not routinely assessed for AKI after returning to the general ward. Furthermore, the conclusion was made based on a single ICU study. Multi-center studies are needed to verify our findings.

This single-center study found that 1.89% of patients who underwent cardiac surgery were re-admitted to the ICU, and 16.30% of them died in the hospital. Cardiac dysfunction and respiration disorder were the most common reasons for readmission. Both SCR and eGFR were significantly associated with in-hospital mortality among readmitted patients, highlighting the predictive value of SCR for mortality after cardiac surgery. The intensivists should pay more attention to renal function in ICU re-admitted cardiac surgical patients.

The authors thank the nurses at the cardiac surgery intensive care unit in Zhongshan Hospital, Fudan University, for the help of data collection. Also, the authors would like to thank Editage () for English language editing.

Reporting Checklist: The authors have completed the STROBE reporting checklist. Available at http://dx.doi.org/10.21037/jtd-20-3205

Conflicts of Interest: All authors have completed the ICMJE uniform disclosure form (available at http://dx.doi.org/10.21037/jtd-20-3205). The authors have no conflicts of interest to declare.

Ethical Statement: The authors are accountable for all aspects of the work in ensuring that questions related to the accuracy or integrity of any part of the work are appropriately investigated and resolved. The study was conducted in accordance with the Declaration of Helsinki (as revised in 2013). The study was approved by the Ethical Committee of Zhongshan hospital, Fudan University (B2019-075R), and individual consent for this retrospective analysis was waived.