Depression of the sternum, known as pectus excavatum, or “sunken chest”, is the most common chest wall deformity in children with an incidence of 1 in 400 births (1). This can affect the cardiopulmonary function, cause chest pain, dyspnea, and exercise intolerance in some patients (2). Furthermore, it can cause social anxiety and psychological distress from dissatisfaction or anxiety with body image. For these reasons, correction is typically recommended (3).

The repair described by Dr. Ravitch in 1949 built upon previous descriptions by a number of surgeons and utilized an open, midline, incision with osteotomy and cartilaginous resection (4-7). These repairs generally fell out of favor upon the introduction of the Nuss procedure, introduced to the public in 1998, which utilized lateral chest wall incisions and a stainless steel bar to invert the sunken chest (8). These repairs eventually became well studied in the pediatric population. The Nuss procedure has been shown to have less blood loss and lower operative time, as well as possibly a shorter length of stay, strong patient satisfaction, lower blood transfusion, and lower overall complication rate (9-12). Reoperation will be necessary for the Nuss procedure to remove the bar, if the bar migrates, and has been associated with a higher rate of hemopneumothorax (10). Nuss procedures in adults have excellent outcomes with good cosmesis using the minimally invasive approach and possibly two bars (13).

National data on these procedures in adults are lacking, limited to these institutional cohorts. We sought to describe the population receiving the Nuss and Ravitch procedures as adults and their immediate outcomes. We hypothesized that operative times for open procedures would be longer, while length of stay, mortality, return to the operating room, and readmission would be similar. We present the following article in accordance with the STROBE reporting checklist (available at http://dx.doi.org/10.21037/jtd-20-2422).

The study used data from the American College of Surgeons National Quality Surgical Improvement Program (ACS NSQIP), from years 2015 to 2018 (14). The program collects patient-level, aggregate data, and is Health Insurance Portability and Accountability Act (HIPAA)-compliant (does not identify location, physician, patient). ACS NSQIP participating hospitals can obtain this data for free. This dataset benefits the researcher by collecting granular data of specific outcomes and risk factors. The study was conducted in accordance with the Declaration of Helsinki (as revised in 2013). The study was approved as exempt non-human subjects research by the Institutional Review Board of the University of Kansas Medical Center.

The study included all patients 18 years of age and older with a postoperative diagnosis of pectus excavatum, according to the International Classification of Diseases ninth and tenth editions. These codes were 754.81 or Q67.6. We excluded patients undergoing other major unrelated operations. Patients were then stratified into two groups, those who underwent open repair (Open, 43 patients) versus minimally invasive repair (MIS, 125 patients), by current procedural terminology coding (Table 1). The open procedure codes were considered Ravitch procedures while minimally invasive codes were considered Nuss procedures. The variables compared included comorbidities, preoperative variables, wound class, and other matching variables. Outcomes examined included complications, mortality, length of operation, length of stay, discharge destination, and readmission. Other common 30-day outcomes were captured. 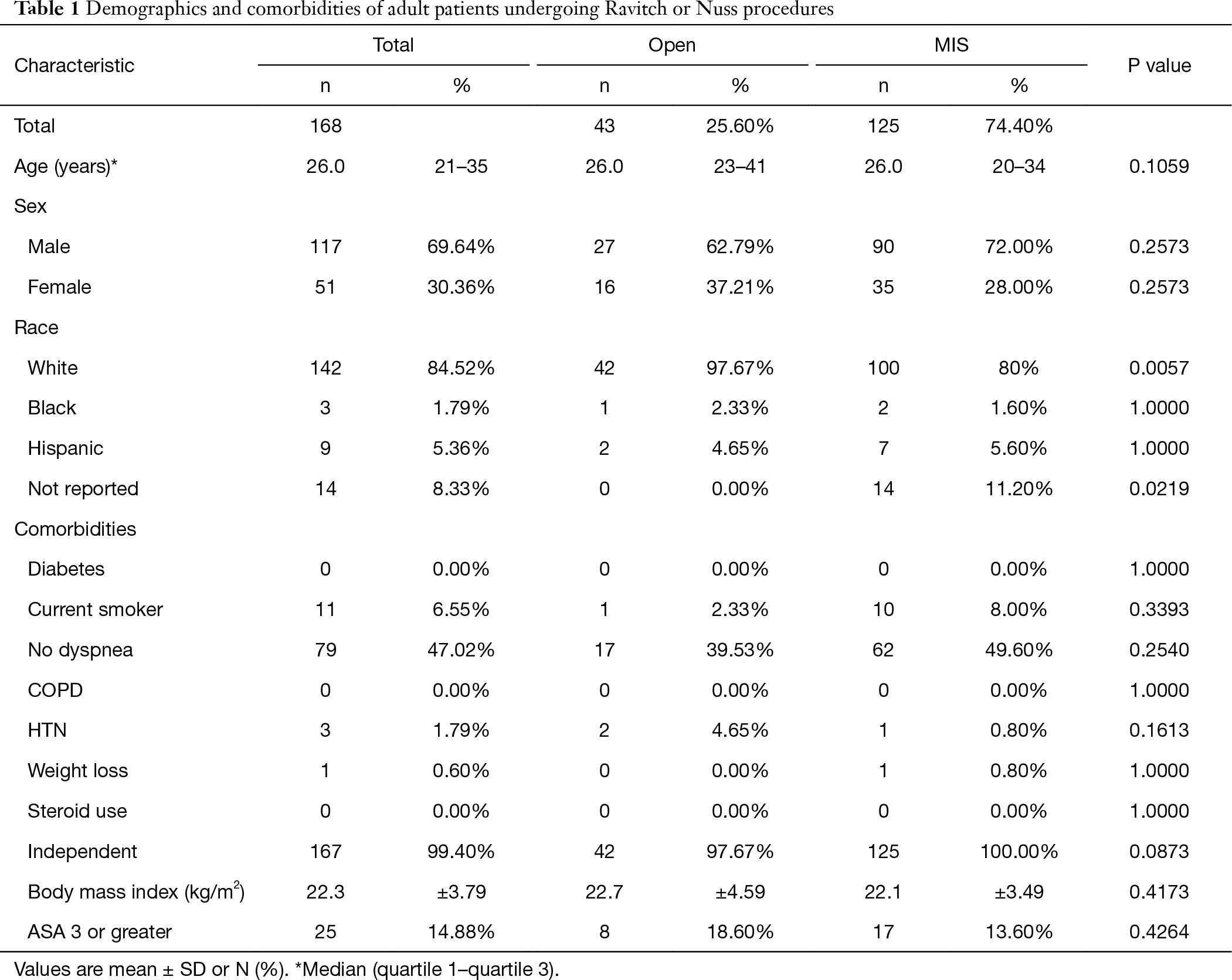 A total of 168 patients were included in the study, 43 (25.6%) undergoing open (Ravitch) repair, and 125 (74.4%) undergoing minimally invasive (Nuss) repair. These patients had a median age of 26 years (range 18-61 years), 117 were male (69.64%), 142 were white (84.52%), and had similar rates of comorbidities such as diabetes and hypertension (Table 1). Among them, 15% of patients were American Society of Anesthesiology (ASA) class three or higher. There were no statistical differences in preoperative demographics such as age, race, sex, or comorbidities such as hypertension, body mass index (range, 16–40 kg/m2), or ASA class between groups. 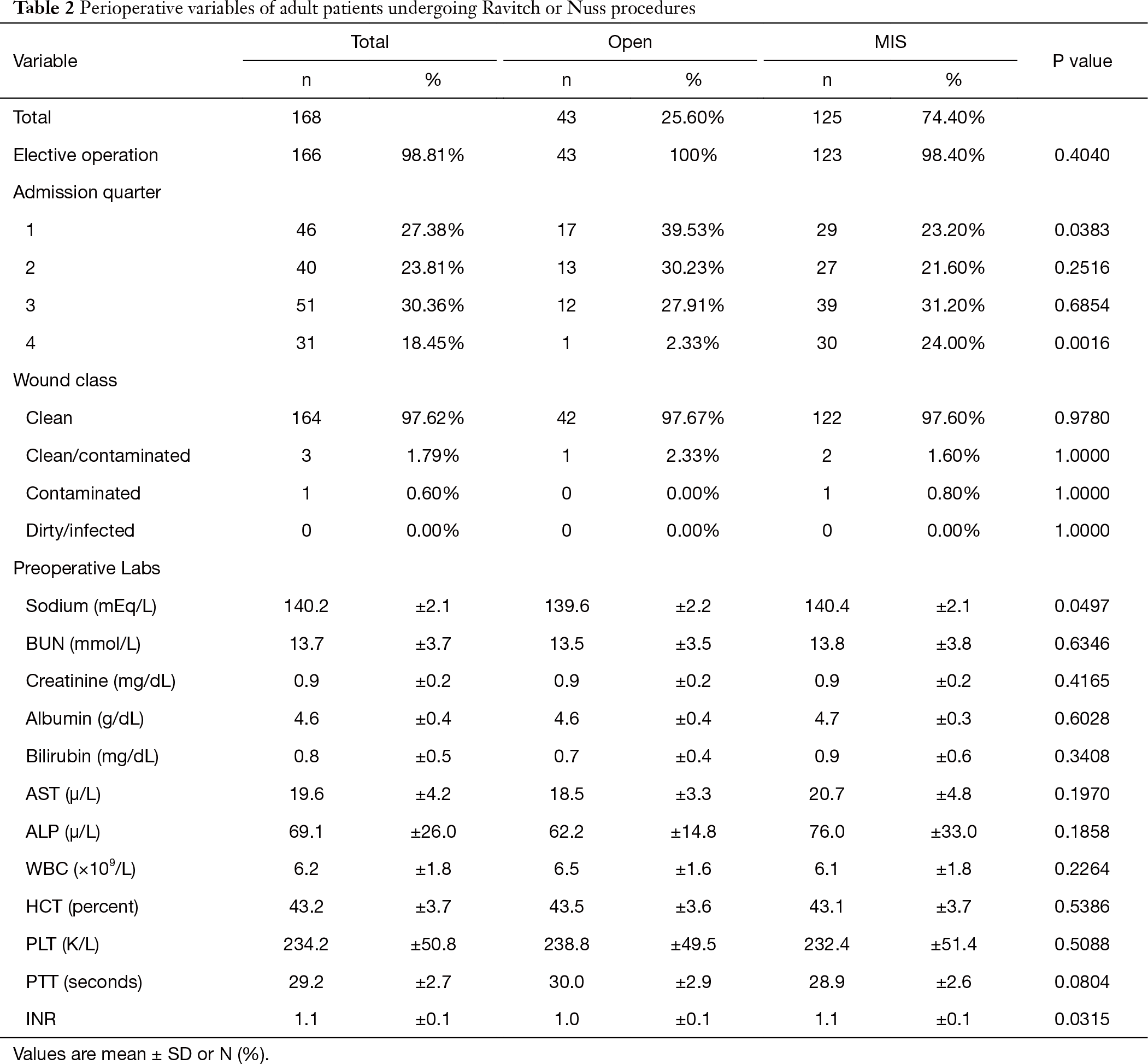 Table 4 describes postoperative outcomes between groups. Time to operation and length of stay were statistically similar, though the median length of stay was five days in the open group and three days in the minimally invasive group (P=0.2873) (2–5 days interquartile range). One 30-day mortality was observed in the minimally invasive group. Median operative time was 128 minutes longer in the open repair group, P<0.0001. Median operative time was statistically different between Open and MIS repair, 250 minutes versus 122 minutes, respectively, P<0.0001. Readmission, reoperation, and inpatient complications were similar between groups. Return to the operating room was noted in three minimally invasive cases for hemorrhage (1), hematoma (1), and other postoperative complication (1). The other three diagnoses for returns to the operating room were not identified. Readmission was noted in one minimally invasive patient for a postprocedural complication of the skin and subcutaneous tissue and one open surgical patient for pleural effusion. All patients were discharged to home. 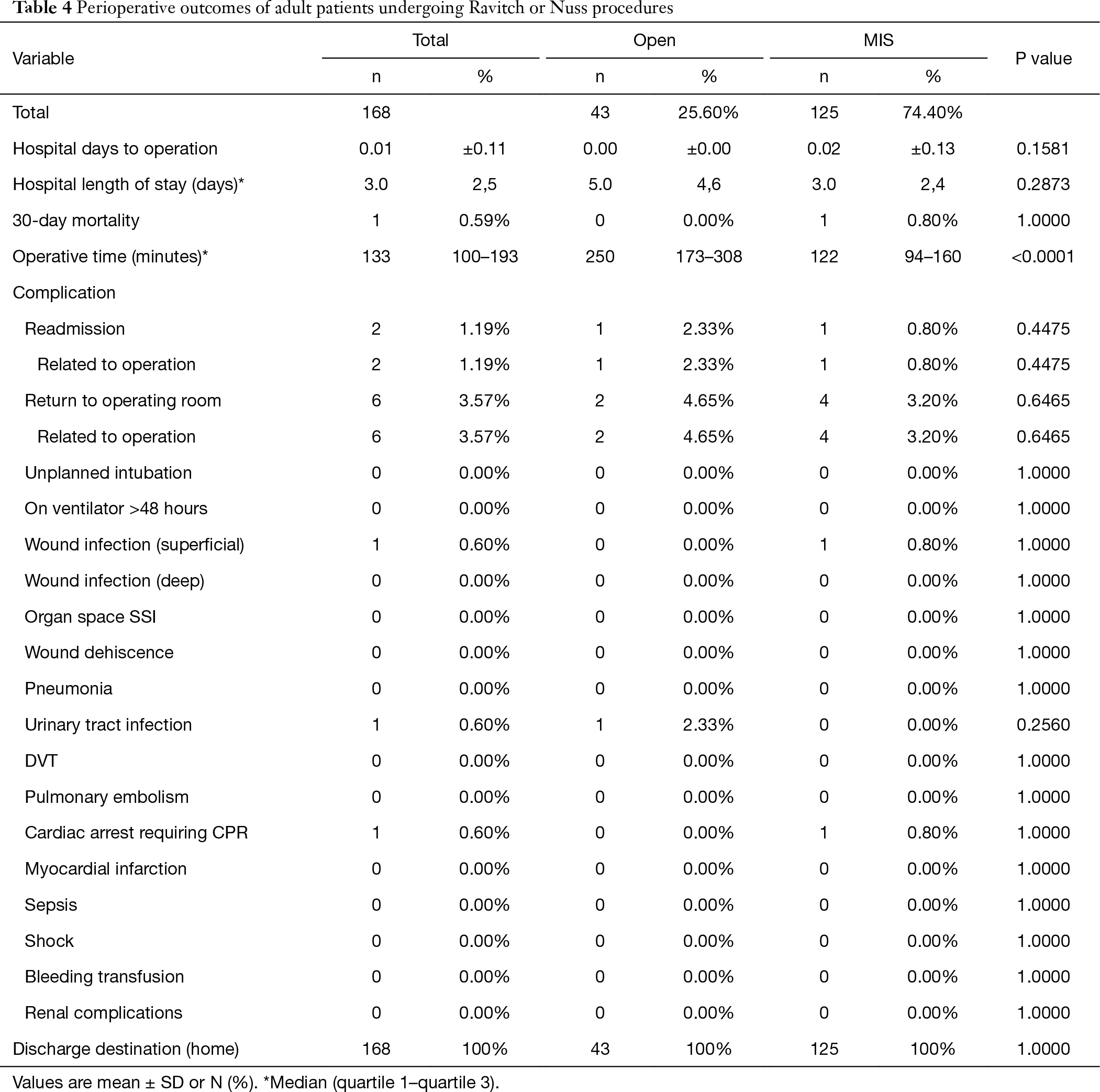 This analysis shows the clinical outcomes of adult patients undergoing surgical correction of pectus excavatum at ACS NSQIP participating institutions. The difference in length of stay between open and minimally invasive approach was statistically similar, but may still be clinically different, five days versus three days, respectively. Operative time, unsurprisingly, was longer for the open procedures, likely due to these operations being more extensive than the Nuss repair. This analysis should provide support to the surgeon, who shares decision making between the two procedures with patients. Furthermore, the analysis continues to add to the growing body of literature of pediatric patients with pathologies who may require surgical interventions as adults.

This study represents the largest national cohort of adult patients undergoing repair of pectus excavatum. The results support our hypothesis that operative times would be longer for the Ravitch procedure but otherwise similar clinical outcomes between groups. Not captured in this study were those patients undergoing repeat operations. This could not stratify what patients were undergoing the Ravitch procedure due to a failed Nuss bar earlier in life, those undergoing a repeated Nuss procedure, or electively undergoing either the Ravitch or Nuss procedure primarily. The use and time of chest tubes were not captured. Haller, or pectus index, and morphology were also not captured. Pain and nausea, an important component of the move towards minimally invasive repair, was not captured in this data. Long term follow-up to assess durability and satisfaction with repair are not included either. These are all important variables to consider when planning a repair and presenting the options to a patient.

The retrospective nature of the study, the limitations inherent to the database, and the inherent differences between specialties’ approaches, limit the study. Furthermore, ACS NSQIP acknowledges several limitations inherent to the database (14). Patients are followed for only 30 days, variables are fairly generic and don’t tell a larger story, and participating hospitals are the data contributors. Case complexity, prior operations, and other similar clinically relevant data is unavailable. Outcomes of cosmesis and long-term recurrence is not available. Hospital and surgeon volume is unavailable, which would allow for more control over variables. Sampling error is somewhat eliminated but complete removal of bias isn’t possible. The database does allow for analysis of trends that other databases may not allow for and may avoid some bias as described by LaPar and colleagues (15).

Nuss repair, while the preferred method of repair in children, may be a less attractive option in adults undergoing repair of pectus excavatum due to decreased pliability of the chest wall. Some surgeons may want to offer a patient an open or Ravitch procedure due to clinical reasons but are uncertain of outcomes. This study supports those surgeons with data on the two procedures. Further research continues to be necessary to study the pediatric to adult continuum of surgical pathology, including pectus excavatum.

Reporting Checklist: The authors have completed the STROBE reporting checklist. Available at http://dx.doi.org/10.21037/jtd-20-2422

Conflicts of Interest: All authors have completed the ICMJE uniform disclosure form (available at http://dx.doi.org/10.21037/jtd-20-2422). The authors have no conflicts of interest to declare.

Ethical Statement: The authors are accountable for all aspects of the work in ensuring that questions related to the accuracy or integrity of any part of the work are appropriately investigated and resolved. The study was conducted in accordance with the Declaration of Helsinki (as revised in 2013). The study was approved as exempt non-human subjects research by the Institutional Review Board of the University of Kansas Medical Center.