Chronic obstructive pulmonary disease (COPD) is characterized by nonreversible airflow limitation caused by the inhalation of irritants such as tobacco smoke (1). Approximately 15‒20% of smokers are likely to develop COPD, and there is substantial heterogeneity in the clinical manifestation, physiological characteristics, imaging characteristics, disease progression, and prognosis of the disease (1,2). COPD is routinely diagnosed based on pulmonary function test (PFT) results, respiratory symptoms, and history of exposure (3). Nevertheless, the technique has several limitations. PFT results are difficult to evaluate in patients with respiratory problem, and tests tends to be relatively insensitive at the early stage of the disease, and cannot distinguish the subtypes of COPD, including emphysema, small airway disease, and bronchial inflammation (2,4).

Computed tomography (CT) is a useful imaging modality for evaluating structural abnormalities and for classifying the COPD subtype. Quantitative CT evaluation is useful for assessing the severity of emphysema, airway wall thickening, and small airway disease (5). Emphysema quantification by means of CT correlated well with histopathology (6,7). However, CT densitometry has limited ability to provide information about the emphysema phenotype. Recently, visual categorization based on CT was proposed by the Fleischner Society, and emphysema has been divided into centrilobular emphysema, paraseptal emphysema (PSE), and panlobular emphysema (8). A study reported that the visual presence and severity of emphysema was an independent predictor of mortality (9). However, the study analyzed only centrilobular emphysema, and did not analyze other COPD phenotypes, such as PSE and bronchial disease. Recently, Park et al. (2) reported that the phenotypes of COPD could classified by combining visual and quantitative CT imaging features, presenting a useful tool for characterizing the heterogeneity of COPD. Nevertheless, quantitative CT evaluation of COPD is not yet widely used in clinical practice. Therefore, we here classified COPD phenotypes by means of visual characterization only, in order to evaluate the relationship of visually assessed CT subtypes with clinical presentation and quantitative CT characteristics.

We present the following article in accordance with the STROBE reporting checklist (available at http://dx.doi.org/10.21037/jtd-20-3041).

Five-hundred-and-four participants from the Chronic Obstructive Pulmonary Disease in Dusty Areas (CODA) cohort, a Korean study that observed the clinical outcomes of COPD in Korean patients residing near cement plants, were initially selected. The details of this cohort had been described previously (10). All enrolled participants underwent medical interview, physical examination, spirometry, and chest CT scan. We excluded 52 participants with quantification error (n=8), lobectomy state (n=4), and severe lung parenchymal distortion due to pneumoconiosis, bronchiectasis, and pulmonary tuberculosis (n=30), and accompanying lung disease (n=10) that could affect the quantitative CT measurement. Finally, 452 participants were enrolled (Figure 1). The study was conducted in accordance with the Declaration of Helsinki (as revised in 2013). This study was approved by the institutional review board of our hospital (approval #2012-06-007), and all participants provided written informed consent.

Figure 1 Flowchart of the study participants.

PFTs were performed using the Easy One Kit (NDD Medizintechnik AG, Zurich, Switzerland), before and after inhalation of 400 µg salbutamol. The spirometric airflow limitation is defined as a postbronchodilator ratio of forced expiratory volume in 1 second (FEV1) to forced vital capacity (FVC) of <0.7. The severity of airflow limitation was classified as described by the 2017 Global Initiative for Chronic Obstructive Lung Disease (GOLD) grading system as grade 1 (≥80%), grade 2 (50‒79%), grade 3 (30‒49%), or grade 4 (<30%) (11). GOLD grade 0 was defined as normal spirometry, and the group with normal FEV1/FVC and FEV1 <80% predicted was defined as having preserved ratio impaired spirometry (PRISm) (3). Bronchodilator responsiveness (BDR) was defined as an increase of at least 12% or 200 mL in FEV1 or FVC after salbutamol administration (12).

Visual analysis and subtypes based on CT images

CT scans were visually assessed on the basis of the Fleischner Society classification system (8). Centrilobular emphysema was graded as trace (ca. 0.5%), mild (0.5‒5%), moderate (>5%), confluent (coalescent centrilobular or lobular lucencies) and advanced destructive emphysema (panlobular lucencies with hyperexpansion and distortion). Substantial PSE was defined as large cyst-like lucencies located near the pleura and interlobar fissure. Visual assessment of CT was independently interpreted by 2 radiologists (with 3 and 11 years of experience in thoracic CT scan interpretation) who were unaware of clinical data. Different interpretations were resolved by consensus.

Quantitative analysis based on CT image

Lung segmentation and image co-registration of inspiratory and expiratory CT were performed using an Aview® system (Coreline Soft Inc., Seoul, South Korea). Parametric response mapping (PRM) analysis was classified into PRMfSAD (≥−950 HU at inspiration and <-856 HU at expiration), or PRMemph (<−950 HU at inspiration and <−856 HU at expiration, Figure 3) (13). PRM data were represented as a percentage of the total lung volume. Lung attenuation at the 15th percentile (Perc 15) was defined as CT attenuation at the 15th percentile of the lung CT histogram (14). Pi10 was defined as the airway wall area standardized to an internal airway perimeter of 10 mm. 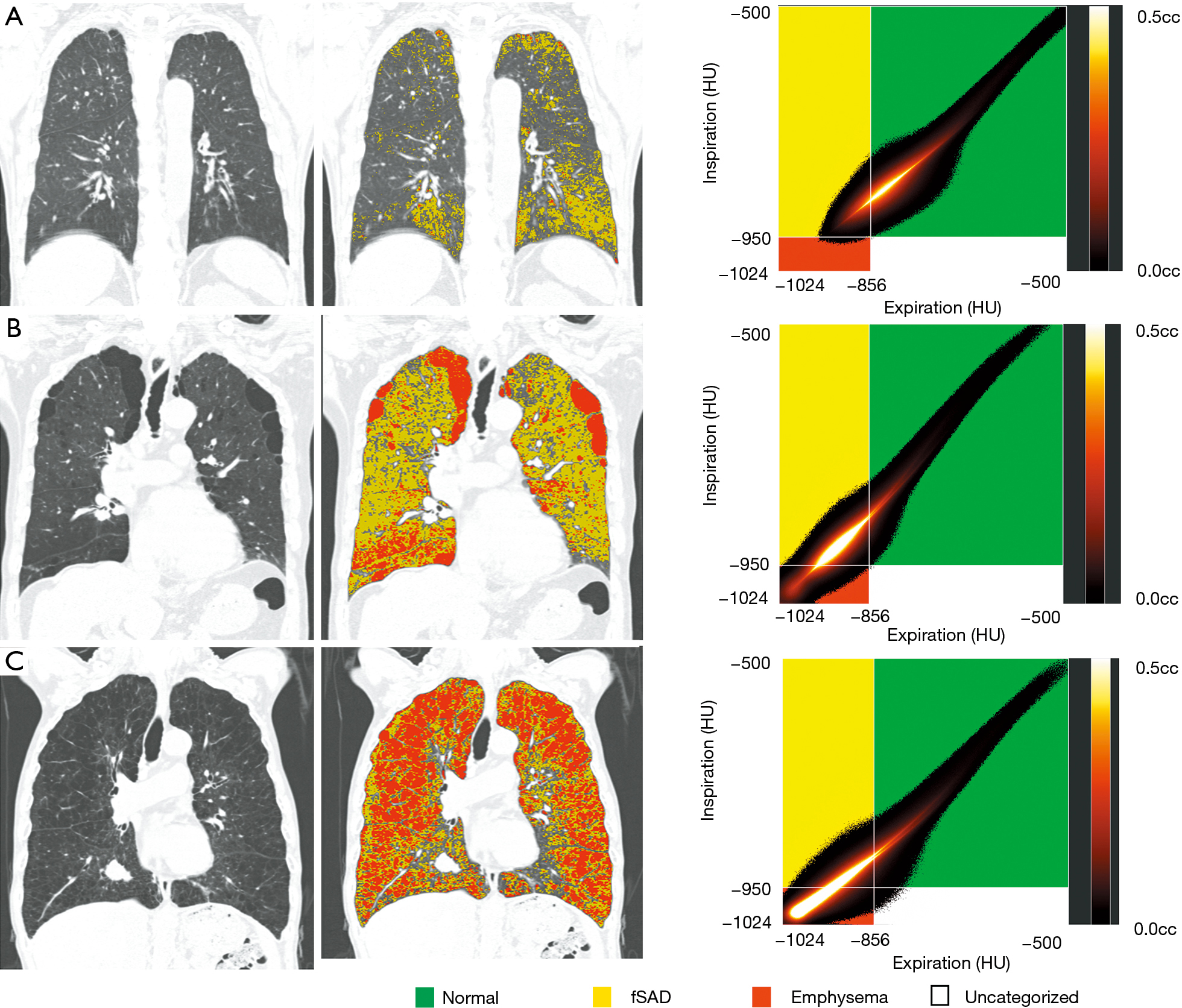 Subjects were divided into 7 subtypes. There were 212 (46.9%) subjects with no abnormality in visual CT analysis. Thirty-one (6.9%) subjects had PSE type and 10 (2.2%) had bronchial type. One-hundred-and-ninety-nine (44.0%) subjects had centrilobular emphysema on visual CT analysis and trace, mild and moderate centrilobular emphysema (11.1%, 20.1% and 9.7% each respectively) were predominant type among the 7 subtypes (Table 2).

Body mass index (BMI) lowered statistically significantly as the degree of emphysema, based on CT findings, worsened. The bronchial group tended to have a higher BMI (24.2±3.2) than the emphysema groups, except for the normal group. The CAT score was highest in subjects with PSE (20.5±9.6). Although there was no statistically significant difference, neutrophil counts were the highest in subjects with PSE. In subjects with PSE, IL-6 was higher than in other subtypes (P=0.004). Pulmonary function lowered as the degree of emphysema worsened. 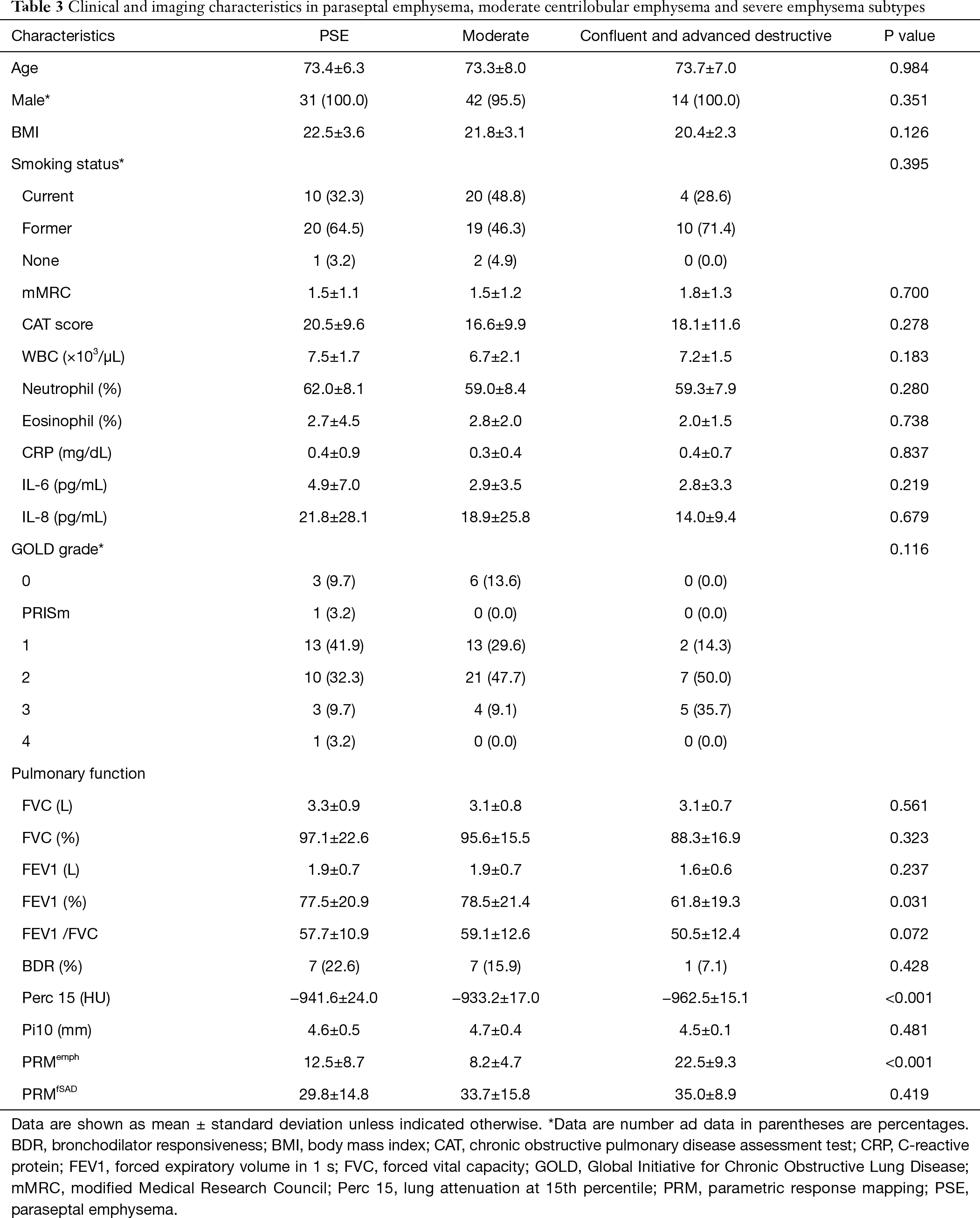 In this study, we demonstrate that COPD phenotypes could be evaluated by using only visual assessment of CT images. We found that pulmonary function and CT quantitative characteristics of PSE were intermediate to those of moderate emphysema and confluent advanced destructive emphysema. Participants with PSE had the highest CAT score, neutrophil count, and IL-6 levels among the subtypes. In addition, participants with trace emphysema showed a higher degree in functional small airway disease among the emphysema subtypes. Pulmonary function and quantitative features worsened with the visual grade of emphysema.

The diagnosis, severity evaluation and longitudinal monitoring of COPD usually depend on PFTs, including FEV1/FVC and FEV1. However, PFT can underestimate lung function in younger patients and overestimate lung function in older (15). A previous study found that FEV1 did not significantly reflect the progression of emphysema and air trapping detected by CT (less than 10% of emphysema and up to 50% for air trapping) (16). In addition, PFT provides a global evaluation of lung damage, rather than regional information (17). CT could be used to evaluate the extent, subtype, distribution and progression of COPD (15). Quantitative CT analysis provides global and regional information regarding emphysema, air trapping, and airways (8), and in patients with COPD, quantitative CT analysis generally correlated with pathology-based quantification of emphysema and the results of PFT (17). A study showed that emphysema associated with the FEV1/FVC, Pi10 did with the FEV1, and the ratio of mean lung density at expiration and inspiration (E/I-ratioMLD) did with the residual volume (18). PRM for COPD quantification is a voxel-based image analysis technique between inspiration and expiration scans after image registration (19). Pompe et al. showed that PRMemph and PRMfSAD strongly associated with presence and severity of COPD (20). In addition, the baseline model (age, BMI, smoking status and pack-years) with PRM had higher diagnostic value compared with other CT-derived biomarkers (Pi10, Perc 15, E/I-ratioMLD) (20). Therefore, in our study, PRMemph and PRMfSAD were used as the COPD quantification biomarkers. However, the heterogeneous nature of COPD cannot be explained by quantitative CT features only (4). In addition to quantitative analysis, visual evaluation of CT images provides information on patterns of altered lung structure and distinct phenotypes in COPD that cannot currently be identified by quantitative CT (8). A previous study showed that visual assessment of COPD could provide reproducible, physiologically significant information (21).

COPD is associated with chronic inflammation, which is characterized by innate and adaptive immune responses (24). The infiltration of macrophages, CD4+-, CD8+- and B-cell lymphocytes were associated with the centrilobular phenotype of emphysematous destruction in COPD (25). On the other hand, histological evaluation showed that neutrophil infiltration is increased in PSE regions (26). In our study, the PSE subtype showed the highest neutrophil count among the subtypes. Neutrophils secrete neutrophil elastase, cathepsin G, and proteinase-3, which lead to alveolar destruction (24). Neutrophilia and sputum neutrophil count correlated with the rate of decline in lung function and peripheral airway dysfunction on CT (27). Tanabe et al. (23) explained that toxic gas spreads to the periphery of the lobule leading to PSE, which leads to an increase in neutrophils. In addition to neutrophils, pro-inflammatory cytokines also play an important role in the pathogenesis of COPD (28). In the present study, the PSE subtype showed significantly higher IL-6 levels; IL-6 increases alveolar cell apoptosis and promotes pulmonary emphysema (29).

Our study showed that participants with bronchial disease tended to have a higher BMI, airway thickness, and lung density, and better lung function. BMI is associated with the severity of emphysema: as BMI lowered, emphysema worsened (33). In contrast, BMI and airway thickness were positively correlated (34). In our study, the bronchial subtype had the highest BMI among the groups, except for the normal group. Due to airway inflammation, the bronchial subtype had higher value of inflammatory markers, including WBC and neutrophil count, and IL-6 and IL-8 levels.

This study had several limitations. First, the number of participants was relatively small for each subtype. In particular, there were few subjects who had confluent centrilobular emphysema and advanced destructive emphysema, and the 2 subtypes had to be combined for analysis. Second, as we did not externally validate our results, a prospective study with a large population is needed. Third, we classified PSE subtype if substantial PSE was present, regardless of other CT features, and thus our PSE subtype groups may not necessarily reflect the characteristics of pure PSE. Fourth, in our study, COPD were defined according to the chronic exposure to noxious agents, chronic respiratory symptoms, postbronchodilator ratio of FEV1/FVC of <0.7, and no serious structural change. Smoking is a significant factor that causes COPD, but various factors other than smoking cause COPD. Our study included patients with non-smoker COPD, so there may be limitation in generalizing smoker COPD. Therefore, further validation is needed.

In conclusion, we demonstrate that visual evaluation of CT images can provide information on lung structure changes and COPD subtypes that cannot currently be identified by quantitative CT. The PSE subtype had better lung function than the severe centrilobular emphysema subtype, and had higher value of inflammatory markers, including neutrophil counts and IL-6 levels. Small airway disease occurs early in this disease, before the development of significant emphysema. Thus, CT-based, visually defined subtypes of COPD can be useful for distinguishing the heterogeneity and pathological processes of COPD.

We would like to thank Editage () for English language editing.

Funding: This research was supported by the Basic Science Research Program through the National Research Foundation of Korea (NRF) funded by the Ministry of Education (NRF 2018R1D1A1B07049670).

Reporting Checklist: The authors have completed the STROBE reporting checklist. Available at http://dx.doi.org/10.21037/jtd-20-3041

Conflicts of Interest: All authors have completed the ICMJE uniform disclosure form (available at http://dx.doi.org/10.21037/jtd-20-3041). The authors have no conflicts of interest to declare.

Ethical Statement: The authors are accountable for all aspects of the work in ensuring that questions related to the accuracy or integrity of any part of the work are appropriately investigated and resolved. The study was conducted in accordance with the Declaration of Helsinki (as revised in 2013). This study was approved by the institutional review board of Kangwon National University hospital (approval #2012-06-007), and all participants provided written informed consent.