Applied pressure of cooling gas: a neglected determinant for size of specimens in transbronchial cryobiopsy

Transbronchial cryobiopsy (TBCB) represents an essential diagnostic step in interstitial lung disease (ILD) to obtain sufficiently larger tissue samples, compared to conventional forceps (1-3). It is known that tissue samples have a positive correlation with freezing time, and patients have a higher risk of TBCB complications when obtaining larger tissue samples (4). However, to obtain a larger tissue sample to improve the diagnostic yield in ILD is contradicted for the safety of TBCB in clinical work. Unfortunately, the balance between the acceptable sample size and the minimal risk of complications remains unknown. In this study, an animal study is conducted to explore the effect of different gas pressures on the TBCB specimen size under the same conditions (time, probe, and contact pressure).

We present the following article/case in accordance with the ARRIVE Guidelines Checklist (available at http://dx.doi.org/10.21037/jtd-20-2446).

All of the canines (n=4, 10–12 kg, 270–320 days) were purchased from Nanjing Chaimen Biological Technology Co., Ltd. (Nanjing, China). The procedures were conducted at the Animal Experimental Center of Guangzhou Medical University (Guangzhou, China). According to the committee’s recommendation for reducing the number of animals, all of the canines were performed TBCB on them with the working pressure at various freezing times, and 8 biopsies were obtained under general anesthesia. Consistent with the clinical standard of the working pressure (40–60 bar) of the gas source, each canine was performed TBCB in the order from a lower to higher working pressure (40, 50, 55, and 60 bar). For each working pressure, 8 biopsies were performed at each freezing time (3, 4, 5, and 6 s). The size and quality of the specimens, as well as complications, were evaluated. Animal experiments were performed under a project license (# SYSK201701710002) granted by institutional ethics board of Animal Protection Ethics Committee of Longguixingke Animal Farm, Baiyun District, Guangzhou, in compliance with the guideline of Animal Ethics Committee Longguixingke Animal Farm for the care and use of animals.

Preparation of the beagle canines

Beagle canines were fasted for 8 hours prior to surgery. Anesthesia was induced via intramuscular injection of ketamine (1 mg/kg) combined with femoral intravenous injection of 3% pentobarbital sodium (0.5 mL/kg). After anesthesia, the canines were placed on the experimental table in the supine position. Self-breathing was maintained, and cardiopulmonary monitoring was conducted. A tracheal tube with a balloon (ID 8.0) was selected for endotracheal intubation guided by bronchoscopy, and the insertion depth of the catheter was adjusted to 3–4 cm above the carina.

TBCB was performed by physicians experienced in bronchoscopy, who had performed more than 50 TBCB procedures in clinical practice. Prior to the procedures, the cryosurgical system (Erbokryo CA, ERBE, Germany) with the recommended range of working gas pressure (40–60 bar) and the flexible cryoprobes (diameter 1.9 mm, ERBE, Germany) were tested in vitro to ensure normal conditions. The canines underwent routine airway examinations with a flexible bronchoscope with an outer diameter of 4.9 mm (Olympus, Japan). The flexible cryoprobes were passed through the bronchoscope working channel to the target bronchus for the biopsy and positioned under X-ray guidance. Once resistance was encountered, the cryoprobe was pulled back 1 cm, and the TBCB was performed for various freezing times as described above. After cooling, the bronchoscope and the cryoprobe were pulled back simultaneously. The biopsy specimens were collected and measured by the assistant. Prior to another TBCB procedure, bleeding was recorded for a maximum of 10 minutes. The number of tissues obtained by the biopsy was under various conditions as described above. The assistant recorded the size of each biopsy specimen and complications such as bleeding and pneumothorax. Based on the previous studies described (4), the bleeding was recorded as follows: grade 0 (no bleeding), grade 1 (negative pressure suction could stop bleeding without additional hemostatic measures), grade 2 (local injection of frozen saline/epinephrine or balloon occlusion was required to stop bleeding), and grade 3 (severe bleeding that could not be controlled under endoscopy, resulting in animal death).

Specimens were acquired and immediately fixed in 10% neutral buffered formalin for 24 hours and then were dehydrated, cleared in xylene, and embedded in paraffin. The paraffin blocks were sectioned at 3 µm intervals using a paraffin microtome. Hematoxylin and eosin (HE) staining was performed on these sections before they were mounted in neutral balsam. The pathological sections were scanned using a Digital Pathology Scanner (PRECICE 500B, UNIC Technologies Inc., China). An iViewer digital slide browser (iViewer 6.2.3, UNIC Technologies Inc., China) was used to measure the maximum cross-sectional area, which was recorded as the specimen area. The evaluating system for specimen quality was based on that described in the literature (4) with revisions as follows: the specimen quality was evaluated by the integrity of the specimen, whether the tissue was crushed, and whether the alveoli, terminal bronchioles, and small blood vessels were included. If the tissue was not crushed, and the alveoli, terminal bronchioles, and small blood vessels were all included, the specimens were considered qualified. The proportion of qualified specimens to the total number of specimens is qualification.

The statistical analyses were performed using SPSS 16.0 statistical software. The measurement data are described as the median (interquartile range). A comparison of the specimen sizes obtained under the different gas pressures was performed using the multi-sample nonparametric test. The correlations of specimen size with gas pressure and freezing time were analyzed by a linear regression. Differences with a value of P<0.05 were considered to be statistically significant. 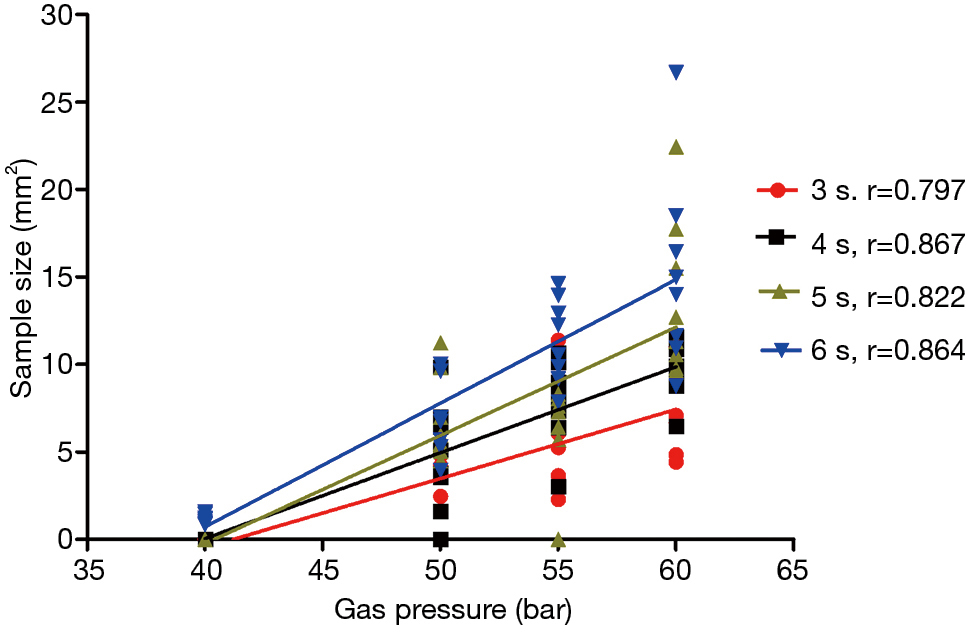 Figure 1 Correlation between the specimen sizes and applied gas pressures according to freezing time.

Figure 2 Correlation between the specimen sizes and freezing times according to applied gas pressure.

Condition and quality of the acquired specimens 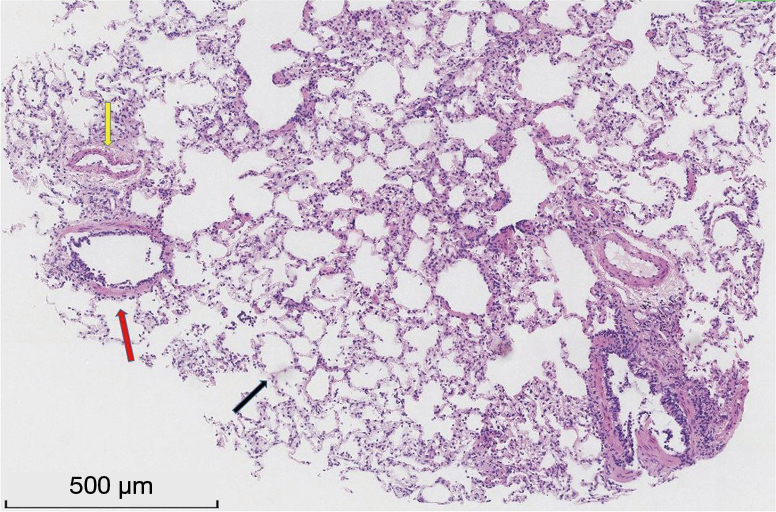 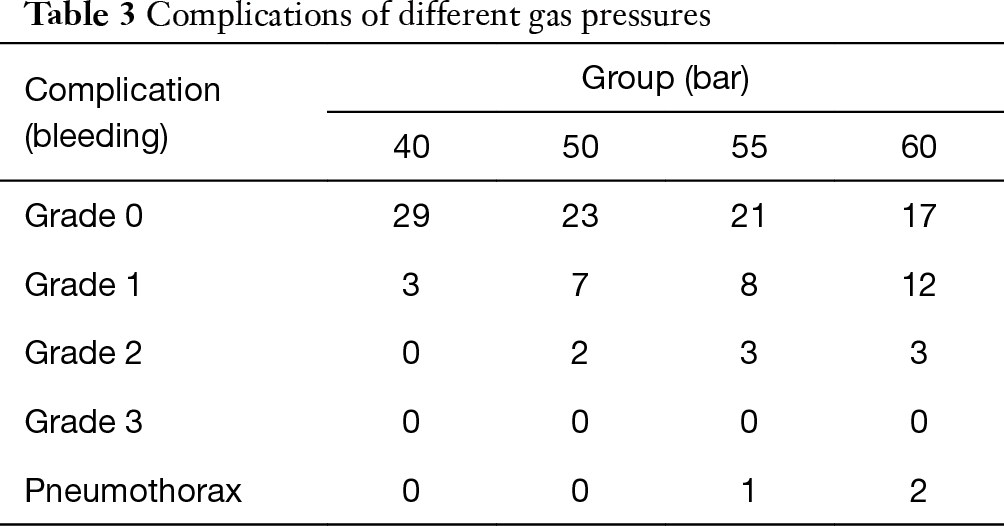 Growing evidence suggests that the utility of TBCB has shown that it can more effectively identify complex histological patterns for ILD diagnosis. Compared to conventional forceps hampered by the small tissue size, TBCB has the advantage of obtaining a larger and complete tissue structure specimen, which also contributes to a high diagnostic efficiency (3,5). However, a larger tissue for improving the ILD diagnostic yield usually means a higher risk of complications during the TBCB procedure. A previous study (6) reported that the impact factors for TBCB specimen size were freezing time, cryoprobe diameter, and probe-tissue contact pressure, as well as tissue properties. In this work, a neglected impact factor on the specimen size during the TBCB procedure in clinical work, and this showed that the TBCB specimen size was positively correlated with the applied gas pressure (r: 0.797–0.867).

Cryobiopsy was used for the biopsy of the endobronchial lesions for the first time in 2008 (7). Then, TBCB initially was used to diagnose pulmonary lesions of ILD in 2009 (1). Recently, this technique has been extensively used to diagnose ILD (8), peripheral pulmonary nodules (9), and rejection after lung transplantation (10) due to its excellent safety and effectiveness, particularly for the pathological classification diagnosis of ILD. Studies (4,6) have shown that the size of the TBCB is correlated with the freezing time, cryoprobe, tissue consistency, and contact pressure of the probe. However, until now there existed no published research regarding the cooling gas pressure.

Generally, studies (11-13) have on TBCB procedures with freezing times of 3–6 s, but no further exploration has been for gas pressures, and it has been recommended to use a relatively broad range of 40–60 bar. Importantly, the applied gas pressure has been neglected in previous studies (1,14-16), and flexible cryoprobes with the same diameter, type of cooling gas, and freezing time were used, and the specimen sizes were still varied (9–15.11 mm2). The results of this study showed that when the applied gas pressure was less than 50 bar, qualified specimens could not be obtained under the commonly used freezing times with a 1.9-mm cryoprobe. In contrast, with a pressure greater than 50 bar, the increase in cooling pressure was positively correlated with adequate and larger specimens.

A question remains: why is the specimen size positively correlated with the gas pressure? Freezing equipment is applied in medicine based on the Joule-Thompson effect, with CO2 as the gas source. As high-pressure CO2 gas is released through small holes, and due to throttle expansion (the Joule-Thompson effect), the temperature of the cryoprobe rapidly cools. Therefore, the higher the gas pressure, the better efficacy of the cooling, and the larger size of the specimen. It is worthwhile to mention that previous studies have not noted this type of impact. Before TBCB was used in clinical practice, the primary purpose of the original design of the freezing equipment was only the freeze-thaw action. Because the freezing time of the freeze-thaw is much longer than the TBCB procedure, a reduction in performance can be compensated by an extension of time. The temperature for the freeze-thaw cycle is within a certain range time, and the requirement for the temperature decrease rate per unit time is not particularly high; therefore, it is difficult to observe the small changes in local temperature on the surface. Thus, in clinical application, the effect of a decrease in gas pressure within the recommended range on the freeze-thaw action is minor or difficult to notice.

The limitations of the study should be taken into consideration. This study used animal experiments, and some differences in lung tissues exist between beagle canines and humans, especially for lung tissues with different lesions. In addition, the evaluation method for the quality of specimens may not be directly applicable to lung tissues with different diseases. The small numbers of TBCB samples limited the statistical power, especially the safety of procedure. Manufacturer suggested that a 1.9-mm cryoprobe could be reused for 30 times within recommended working pressure. But still there was a very low rate of a buckling in the probe for each procedure. The effect of the applied gas pressure on clinical TBCB still requires further confirmation by a multicenter prospective randomized controlled study.

In summary, the TBCB specimen size was positively correlated with the applied gas pressure; therefore, the applied gas pressure is an important factor that influences the sample size and quality and should not be neglected. When using a 1.9-mm cryoprobe for TBCB, the lowest limit of the normal working pressure range of gas should be increased to above 50 bar to obtain qualified specimens. The optimal combination of applied gas pressure and freezing time in different disease types will be further explored.

We acknowledge Guangqiao Zeng and Qian Han for their assistance with proofreading the manuscript.

Reporting Checklist: The authors have completed the ARRIVE Guidelines Checklist. Available at http://dx.doi.org/10.21037/jtd-20-2446

Conflicts of Interest: All authors have completed the ICMJE uniform disclosure form (available at http://dx.doi.org/10.21037/jtd-20-2446). Prof. NZ serves as the editor-in-chief of Journal of Thoracic Disease. The authors have no other conflicts of interest to declare.

Ethical Statement: The authors are accountable for all aspects of the work in ensuring that questions related to the accuracy or integrity of any part of the work are appropriately investigated and resolved. Animal experiments were performed under a project license (# SYSK201701710002) granted by institutional ethics board of Animal Protection Ethics Committee of Longguixingke Animal Farm, Baiyun District, Guangzhou, in compliance with the guideline of Animal Ethics Committee Longguixingke Animal Farm for the care and use of animals.