Spontaneous pneumothorax (SP) consists of primary spontaneous pneumothorax (PSP) and secondary spontaneous pneumothorax (SSP) (1). PSP is defined as the accumulation of air in the pleural cavity without trauma and nor clinically apparent underlying lung disease (2). The incidence of PSP is estimated to be 6.3 to 18 cases and 1.2 to 6 cases per 100,000 cases annually for men and women, respectively, and it occurs frequently in young, tall men with low body mass index (BMI) (3,4). Video-assisted thoracoscopic surgery (VATS) is performed as surgical treatment for approximately 10,000 cases of PSP annually in Japan (5). In general, the cause of PSP onset is the collapse of bullae, but the triggering mechanism is still unknown in despite advances in treatment (6).

Previous studies have suggested that triggers for the onset of PSP may involve weather conditions such as atmospheric pressure (7-10), temperature (11), and duration of sunshine (12), and overexpansion of bullae due to trapped air may trigger the occurrence of PSP after falls in external ambient pressure (7-18). However, some reports have demonstrated no correlation between PSP on set and weather conditions (15,19-21), since no consensus has been obtained to date.

There has been no study conducted on this topic in our region. The aim of this retrospective study was to evaluate the relationship between onset of PSP and weather changes in Iwate, Japan. We present the following article in accordance with the STROBE reporting checklist (available at http://dx.doi.org/10.21037/jtd-20-3395).

Data for this retrospective cohort study were obtained from the medical records of all patients who underwent VATS for PSP between 1 January 2010 and 14 June 2020 (total study period, 3,818 days) at Iwate Medical University Department of Thoracic Surgery. The study was conducted in accordance with the Declaration of Helsinki (as revised in 2013). The study was approved by the institutional review board at Iwate Medical University (permit number: MH2020-115) and individual consent for this retrospective analysis was waived. Of the 450 cases diagnosed with SP from lung collapse confirmed on chest X-ray and computed tomography (CT) imaging, 329 cases with unclear date of onset, iatrogenic pneumothorax, traumatic pneumothorax, chest tube drainage only, differentiation of menstrual pneumothorax, cases without bullae and SSP were excluded SSP was defined as secondary to underlying diseases such as chronic obstructive pulmonary disease (COPD) or interstitial pneumonia (IP). Cases in which the location of occurring pneumothorax was geographically distant from the meteorological station which meteorological data were presumed to be different were also exclude. Recurrence cases was double counted, so finally, 112 cases (106 patients, but 6 had a recurrence once each) met the selection criteria. The onset time of PSP was defined as the time when the symptoms, which were regarded as those induced by the pneumothorax (such as chest pain, back pain, and dyspnea), were clearly exhibited. The visiting time to hospital was initial diagnosis of PSP by chest X-ray and CT. VATS was performed in all cases via three ports with monitor vision only under general anesthesia with a double-lumen endotracheal tube for single lung ventilation.

Of the 3,818 days in this study period, the day which the patients became aware of the symptoms was classified as the PSP onset day (n=112, days with PSP group), and all other days were classified as the PSP non-onset day (n=3,706, days without PSP group) (Figure 1). Meteorological data were collected from an airbase station using an online source for the same place and same time (22). Daily measurement of meteorological parameters included average atmospheric pressure (hectopascal: hPa), average minimum and maximum temperatures (°C), average humidity (%), average wind speed (km/h), and total duration of sunshine per day (hour). Changes in each value between the study day and 24, 48, 72, and 96 h before were assessed for days with and without PSP. 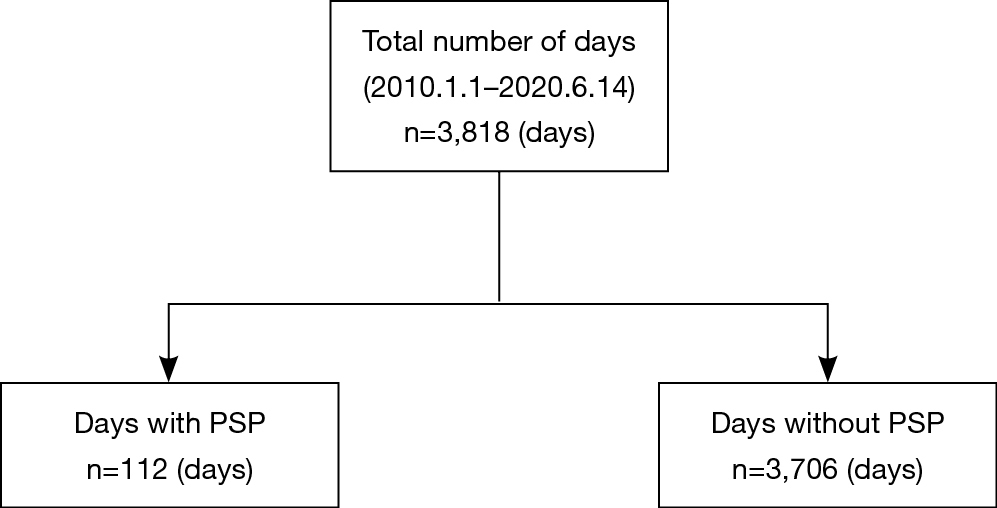 Figure 1 Classification of total days in this study period.

All 112 cases who underwent VATS for PSP were retrospectively reviewed (Figure 1). Clinical characteristics of the study population are summarized in Table 1. Eligible patients comprised 100 males and 12 females, with an average age of 23.7±0.1 years, and BMI was 19 kg/m2, so lean men had more PSP occurred. Each type of meteorological data up to 4 days was compared between the days with PSP group (n=112) and the days without PSP group (n=3,706) using univariate analysis, revealing no significant difference between groups (Table 2). 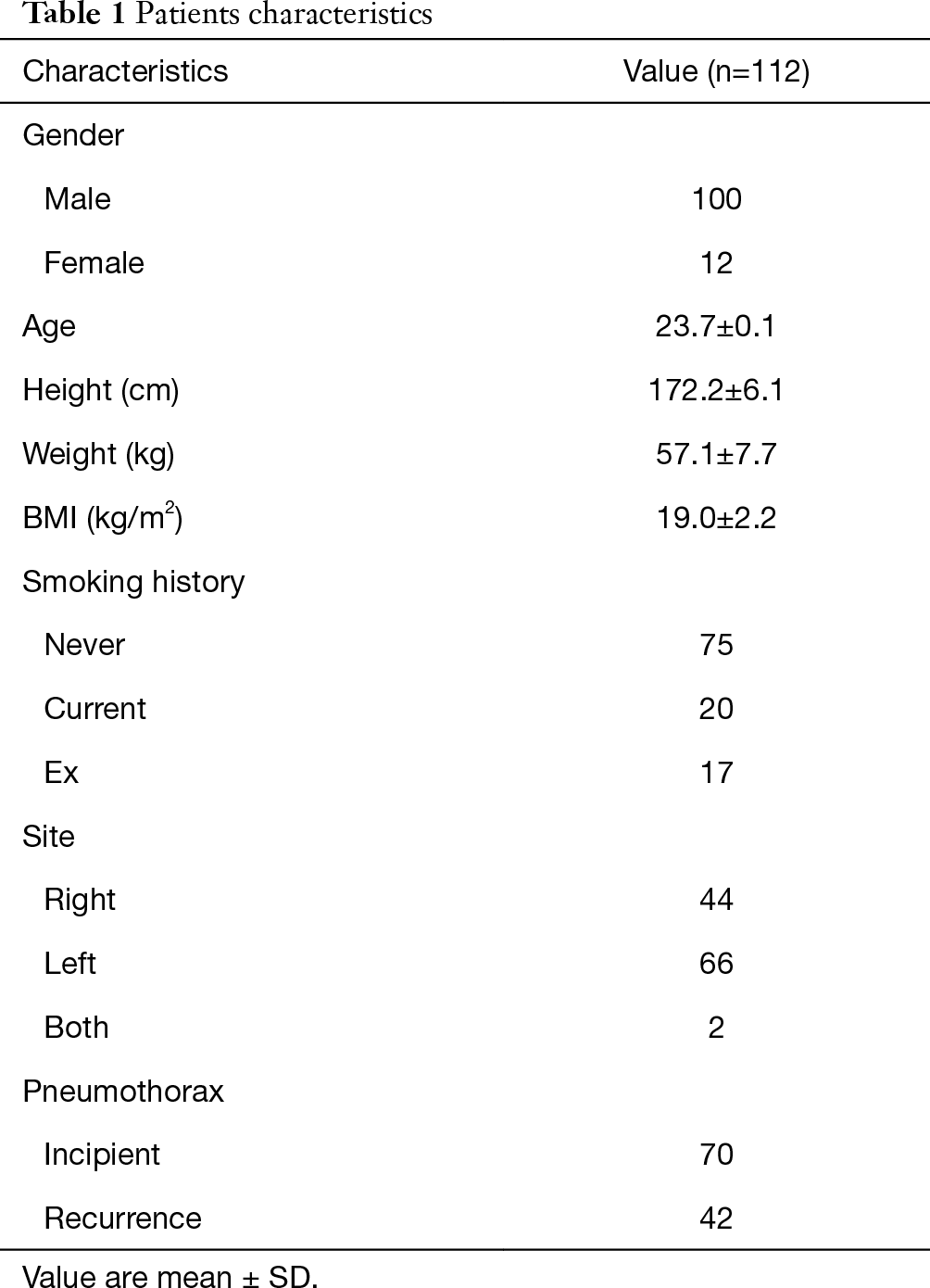 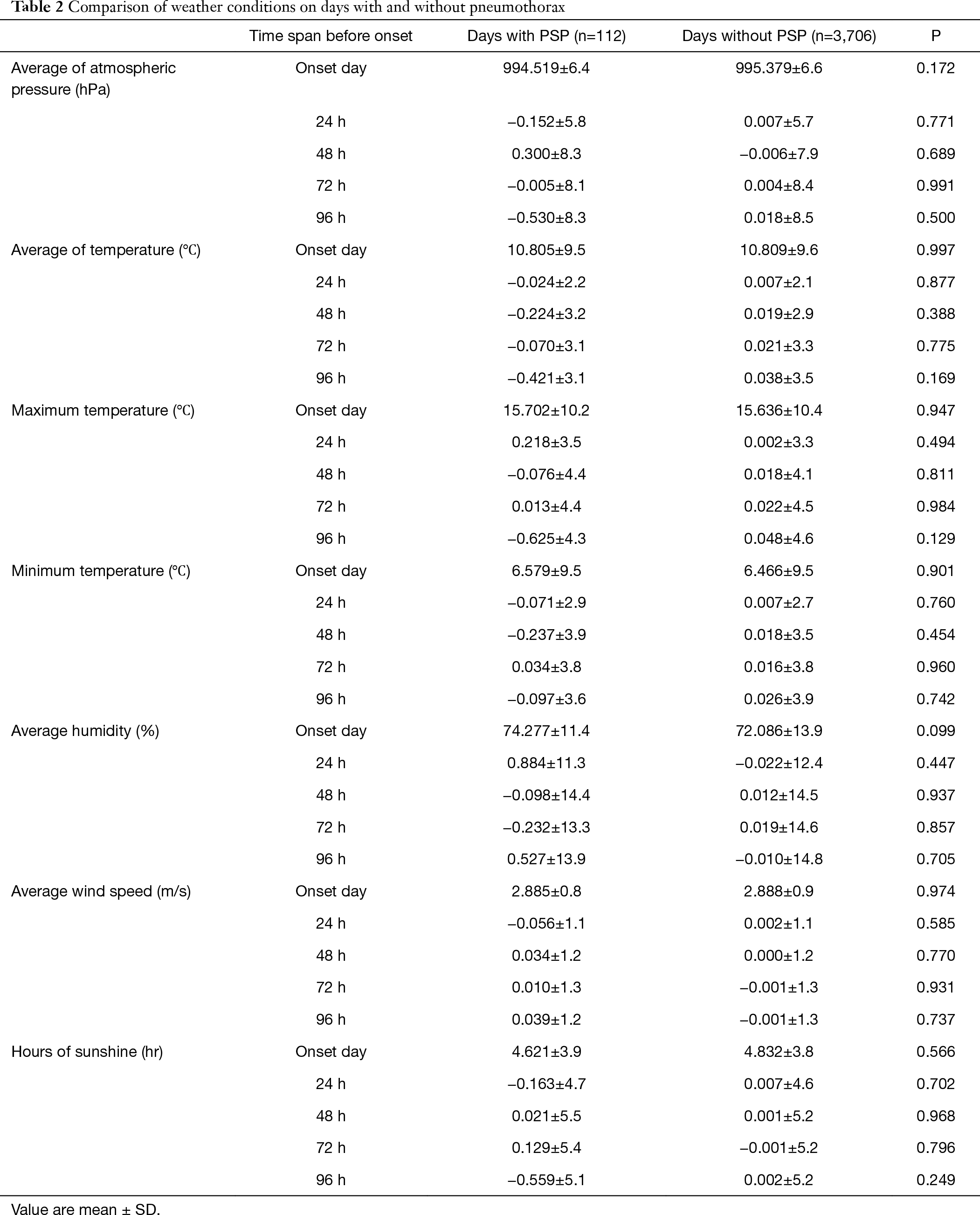 Logistic regression modeling was used to evaluate predicted risks for onset of PSP with respect to weather conditions, revealing a significant difference 2 days before onset for an increase in average temperature (OR: 1.97, P=0.018), minimum temperature (OR: 1.97, P=0.018), average humidity (OR: 1.58, P=0.043), and decreased sunshine time (OR: 2.26, P=0.012) (Table 3). No significant difference was observed in atmospheric pressure at 2 days before onset. 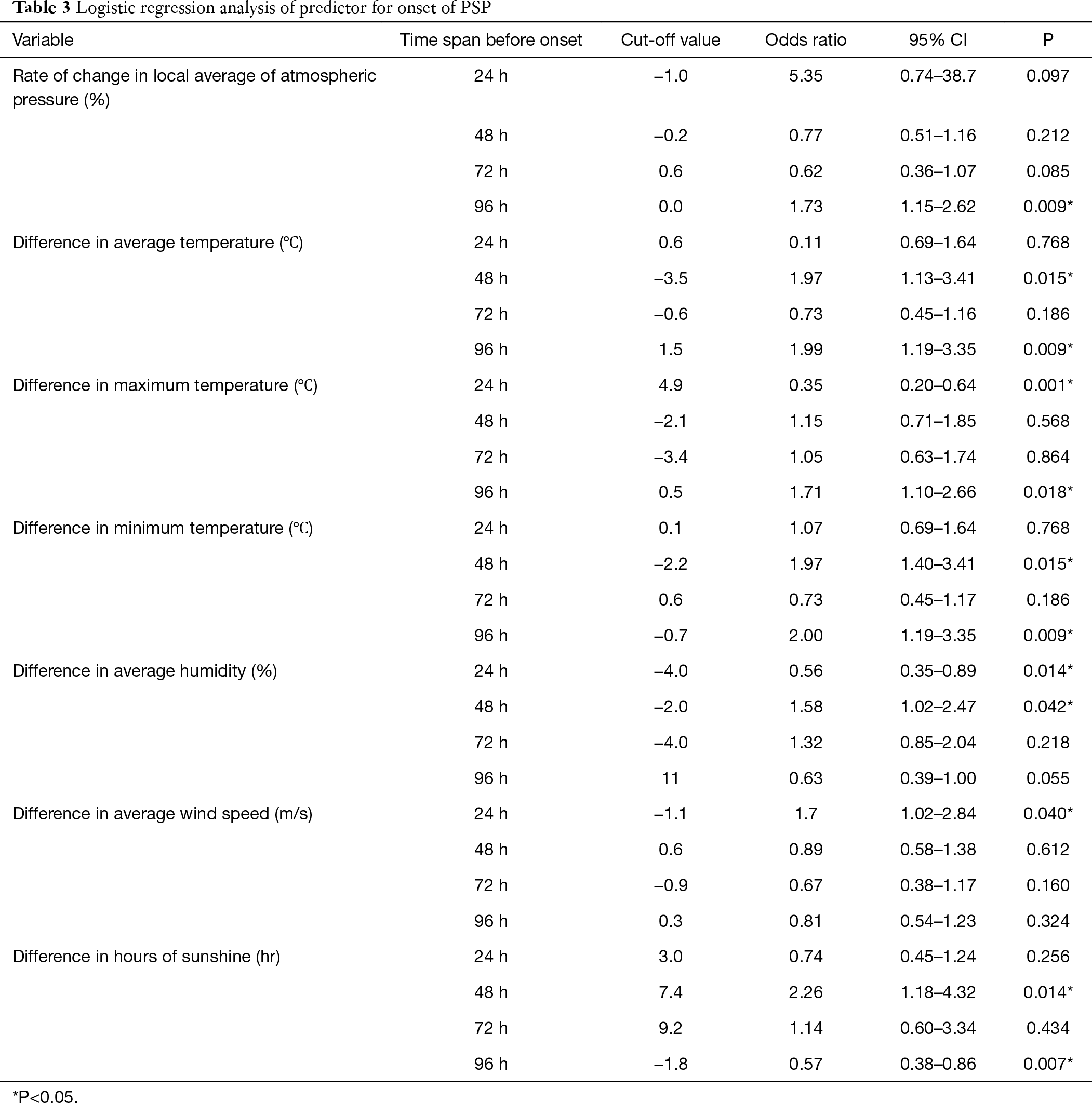 The Figure 2 showed the monthly number of PSP. Although there was no significant difference, the prevalence was low in midsummer (August) and midwinter (December), and it seemed that PSP occurred tend to be high at the transition from spring to summer (May and July).

This study evaluated the relationship between onset of PSP and meteorological conditions in 112 eligible cases who underwent VATS in Iwate, Japan. Logistic regression analysis demonstrated that significant difference at 2 days before PSP onset for increasing average temperature (OR: 1.97, P=0.018), minimum temperature (OR: 1.97, P=0.018), average humidity (OR: 1.58, P=0.043), and decreased sunshine time (OR: 2.26, P=0.012) (Table 3). No significant difference was observed in atrophic pressure at 2 days before onset. The results from this study indicated that onset of PSP may be related to the increased temperature and humidity likely, the accompanying approach of a warm front.

In Japan, weather changes between the four seasons are clear, because air masses (huge high atmospheric pressure) with greatly different temperatures and humidity change their power depending on the season. Different air masses cover the Japanese archipelago in summer and winter, then stable weather conditions continue. While the weather changes periodically in spring and autumn, because mobile high atmospheric pressure and extratropical cyclones are swept by westerlies (23). This study suggested that the onset of PSP correlated with weather change 2 days earlier. In meteorology, conditions in which an increase in temperature, and humidity, and a decrease in hours of sunshine occur at the same time would match the approach of a warm front. With a warm front, the temperature rises because the warm air rides on the cold air, and on the front surface, the temperature difference and abundant water vapor carried by the warm air cause a wide range of layered clouds to develop, resulting in relatively long rain fall. This is turn results in increased humidity and decreased hours of sunshine. A previous report from Japan suggested that the rise in temperature and decreased hours of sunshine 2 days earlier correlate with the onset of PSP (18), which is consistent with our result, since the approach of a warm front may cause PSP in Japan. Changes in atmospheric pressure are widely hypothesized to induce PSP, and warm fronts generate an updraft, that decreases atmospheric pressure as the front approach, meeting the conditions for PSP onset.

Since the fronts tend to form at the boundary between warm and cold air, so fronts are unlikely to occur in midsummer and midwinter when air masses cover the Japanese archipelago, and they often occur at the turn of the season. In this study, the prevalence of PSP was low in midsummer (August) and midwinter (December), and it seemed that PSP occurred tend to be high at the transition from spring to summer (May and July) (Figure 2). It is presumed that the extremely low occurrence of PSP in June might be related to the fact that the rainy season in Iwate is started in June. In brief, because the rainy front which is a stationary front has occurred, it is considered that there is little change of temperature and humidity rise which are hypothesize to be the cause of PSP.

This study is the first report to assess the approach of a warm front as potentially related to PSP onset in Japan. Warm front is fairly familiar information, and as such can be confirmed from daily weather forecasts, representing an index that is generally easy to understand as a pneumothorax warning in our residence area. Although a relationship with PSP onset and atmospheric pressure could not be demonstrated in this study, it is necessary to conduct studies at different areas and further verify the mechanisms.

The authors wish to thank Tatsuo Tanita for his variable suggestion.

Reporting Checklist: The authors have completed the STROBE reporting checklist. Available at http://dx.doi.org/10.21037/jtd-20-3395

Conflicts of Interest: All authors have completed the ICMJE uniform disclosure form (available at http://dx.doi.org/10.21037/jtd-20-3395). The authors have no conflicts of interest to declare.

Ethical Statement: The authors are accountable for all aspects of the work in ensuring that questions related to the accuracy or integrity of any part of the work are appropriately investigated and resolved. The study was conducted in accordance with the Declaration of Helsinki (as revised in 2013). The study was approved by the institutional review board at Iwate Medical University (permit number: MH2020-115) and individual consent for this retrospective analysis was waived.