PSP has an annual incidence of 18–28 per 100,000 in men and 1.2–6.0 per 100,000 in women (2). The goals of treating a PSP include elimination of the existing pneumothorax and minimizing recurrence (3,4). The most recent guidelines for management of PSP were published by The American College of Chest Physicians (ACCP) in 2001 and the British Thoracic Society (BTS) in 2010 (5,6). In summary, small PSPs in stable patients can be observed but a large pneumothorax (variably defined in the guidelines as >2 or >3 cm) or any pneumothorax in an unstable patient requires aspiration or a chest tube. Chest tubes can be removed once there is no air leak. In these guidelines, if the air leak persists for more than approximately 4 days, the next recommended step is surgery. Previous studies have examined trials of non-operative management ranging from 3 to 14 days (7-9). The risk of recurrence for PSPs treated with conservative treatment alone is 16–52% after the first episode and 65% after the second ipsilateral episode (10,11). Therefore, it is important to determine which surgical technique best minimizes recurrence risk.

This retrospective cohort study describes patient outcomes after surgical treatment for PSP at a quaternary-care hospital for the region and the only center providing thoracic surgery services. All incident cases of PSP treated with bullectomy from June 2006 to December 2018 in patients older than 17 and younger than 45 years of age were identified using the Canadian Institute for Health Information (CIHI) hospitalization records. Comparable publications limited the upper age limit for inclusion at 40 years (12,14) or 50 years (13). Chart abstraction for patient demographics and operative details was completed using electronically available medical records.

The study was conducted in accordance with the Declaration of Helsinki (as revised in 2013). The study was approved by the institutional ethics board of the Nova Scotia Health Authority (File number 1024736) and individual consent for this retrospective analysis was waived.

The primary study outcome is pneumothorax recurrence. Recurrence was defined to occur in a participant who had already undergone bullectomy or wedge resection for PSP requiring a second surgery for ipsilateral pneumothorax either for prolonged air leak or from true recurrence. If this second surgery occurred fewer than 15 days after the initial surgery date, this was classified as a prolonged air leak. If a second surgery was performed more than 15 days following the initial surgery, it was classified a ‘true’ recurrent pneumothorax. The etiology of the clinical recurrence in each case was not captured in the original data which is why ‘true recurrence’ and ‘prolonged air leak’ are defined temporally. The cut-off of 15 days was chosen because at our centre, no patient would undergo a trial of inpatient non-operative management of an air leak exceeding 15 days, and comparable previous studies have examined trials of non-operative air leak management ranging from 3 to 14 days (7-9). There were no instances in which a patient presented following bullectomy with a clinical or radiographic ipsilateral pneumothorax recurrence and was managed non-operatively rather than undergoing a second ipsilateral surgery.

Secondary outcomes included an assessment of potential predictors of pneumothorax recurrence. These factors included age, sex, smoking status, disease severity, surgical method, contralateral pneumothorax (historical diagnosis or diagnosed during the study period), year of initial surgery, surgical approach, and performance of decortication. A priori the cases were stratified based on an assessment of disease severity. Disease severity was scored based on thoracoscopic findings at the time of surgery using Vanderschueren’s classification (14). In this validated classification scheme, stage 1 is used when no thoracoscopic abnormalities are noted, stage 2 when pleuropulmonary adhesions are seen, stage 3 when blebs are noted with a greatest dimension <2 cm, and stage 4 when bullae with a greatest dimension ≥2 cm are noted. Some operative dictations did not explicitly measure the greatest dimension of the bullae seen. In these cases, bullae described as ‘giant,’ or ‘large’ were categorized as stage 4, and blebs described as ‘small’ were categorized as stage 3. In cases for which the operative note did not adequately describe bulla size, the pathology report was used to estimate size. Those cases for which disease severity could not be determined based on the operative or pathology reports are reported as ‘Indeterminate’.

Patients in this study typically had one scheduled follow-up appointment approximately 4 to 6 weeks post-operatively. Beyond this one scheduled appointment, the patient was brought to the attention of the Thoracic Surgery group if they experienced symptoms and then underwent a chest X-ray demonstrating pneumothorax recurrence. In this catchment area, Thoracic Surgery is performed only at this quaternary centre, so pneumothorax recurrences would not be referred elsewhere.

Comparisons of proportions between study groups were made using the Chi-square tests and Fisher’s exact tests when cell sizes were less than five. T-tests were used to analyze continuous variables. Factors associated with recurrence were evaluated by logistic regression. Results were considered statistically significant at P value <0.05. All analyses were performed using SAS version 9.4 (SAS Institute, Cary, NC). To account for the time to the outcomes, we additionally re-examined our data using the Kaplan-Meier method with log-rank tests for univariable analysis and Cox regression for multivariable analysis. 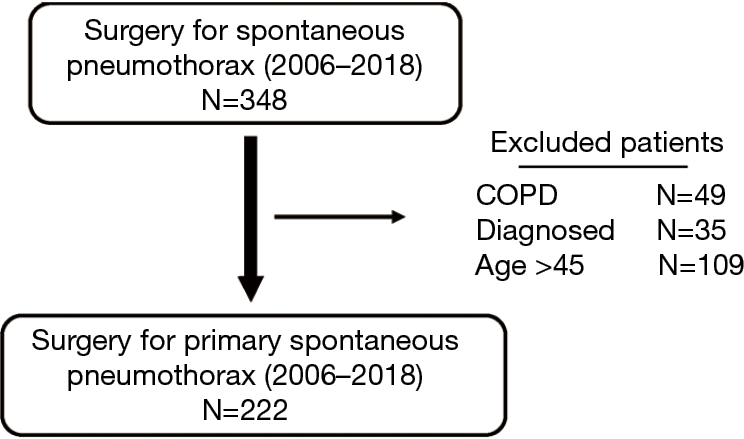 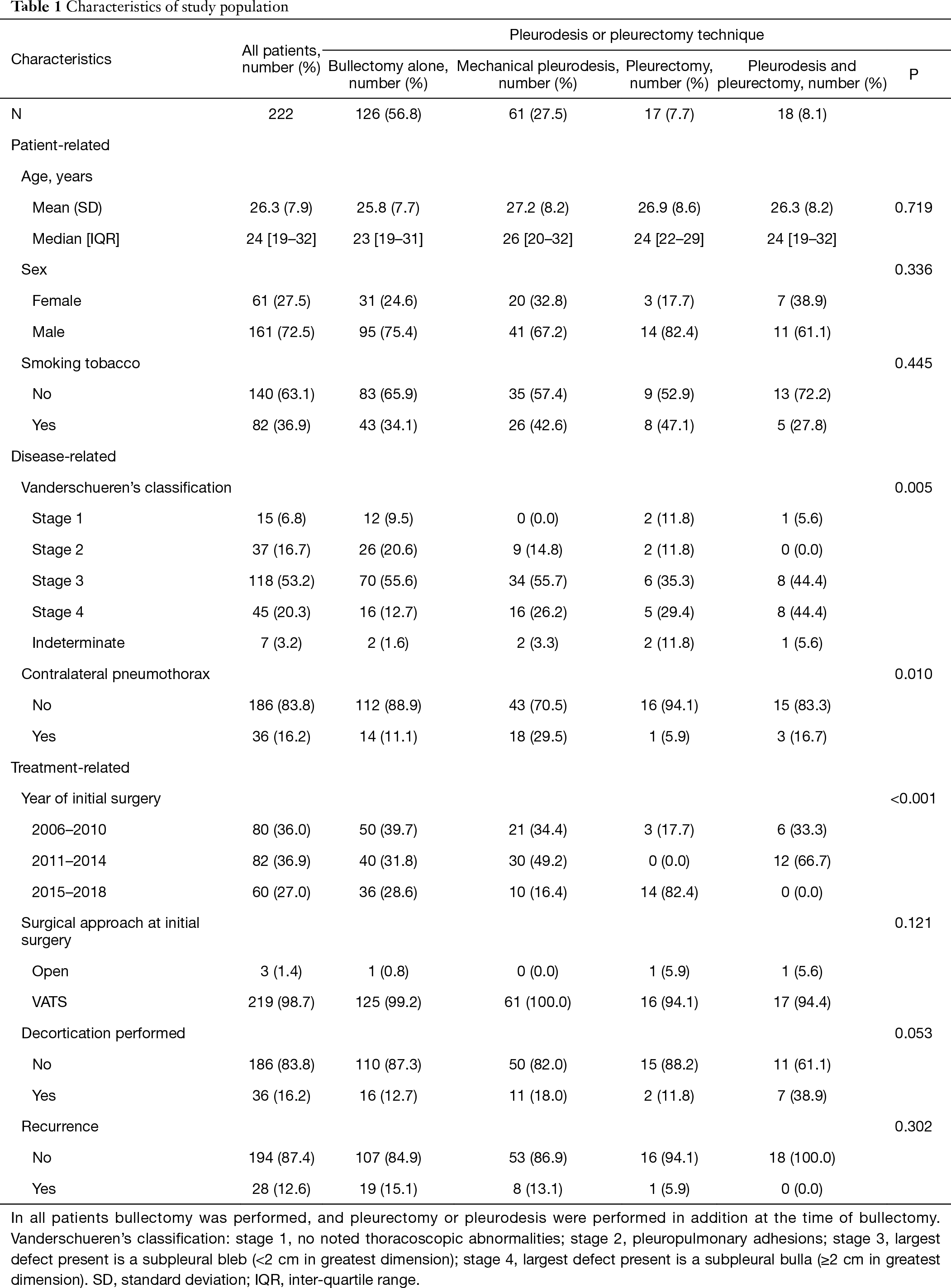 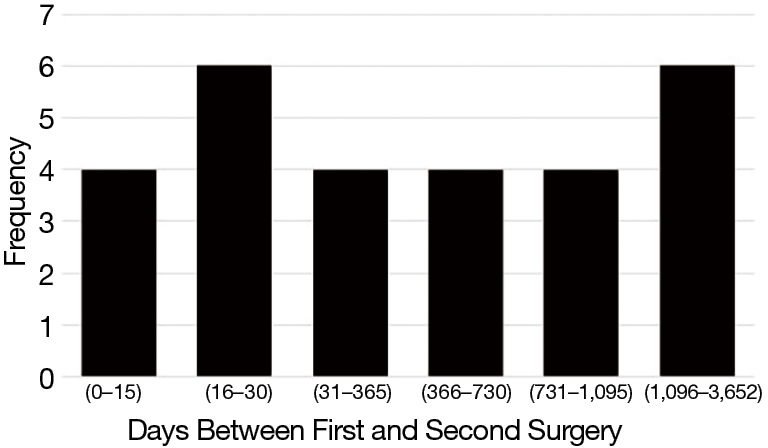 Figure 2 Frequency of cases of recurrence.

Univariable and multivariable analyses (Table 3) found no associations between rate of recurrence and year of surgery, age, sex, smoking, or disease severity. On multivariable analysis using PSP treated with bullectomy alone at the time of initial surgery as a reference, patients who underwent bullectomy with mechanical pleurodesis at the time of initial surgery were found to have a lower risk of recurrence (OR 0.82, 95% CI: 0.31–2.20) and those who underwent bullectomy with any pleurectomy were found to have the lowest risk of recurrence, though these differences were not statistically significant (OR 0.15, 95% CI: 0.02–1.27, P=0.218). There were no differences in the results when re-examined using time to event analysis. 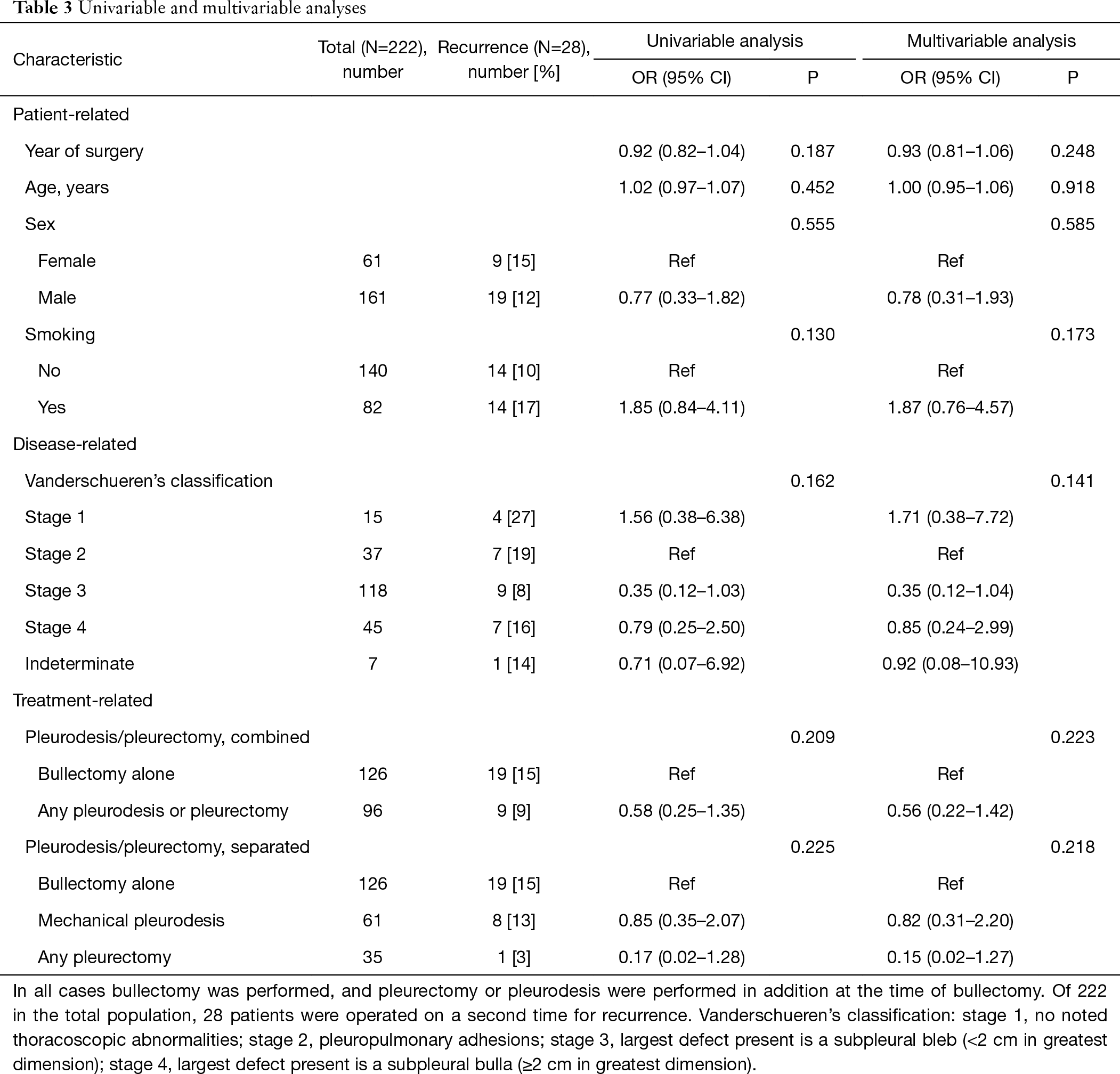 No statistically significant association was found between recurrence rate and any other factors analyzed in this study. This lack of associations contrasts with previously published studies. Predictors of increased recurrence rate after surgery for PSP have previously been identified for smoking (17,18), younger age (19,20), female sex (17,18), VATS approach (21), and greater disease severity (14).

Although not statistically significant, patients found to have no thoracoscopic abnormalities (Vanderschueren’s stage 1) were more likely to recur than were patients found to have a lesion. Review of the operative reports revealed that following an initial surgery which failed to find a thoracoscopic abnormality, blebs or bullae were found in many of the second surgeries. It is possible that these lesions were missed initially. It is important to maintain a high suspicion that a targetable bulla is present even when no thoracoscopic abnormality is initially discovered. Tsou et al. found no association between performance of a pre-operative CT scan of the chest in cases of PSP and recurrence after surgery (22). Additionally, bullae detection rates are recorded to be higher during surgery (76–100%) than on pre-op CT scans (23-25). Almajid et al. reported a positive predictive value (PPV) of 86% and a negative predictive value (NPV) of 73% for detection of PSP on CT scan (26). Therefore, pre-operative CT scan does not seem to confer a superior rate of bulla detection and may not be helpful even in cases where no bullae are initially detected thoracoscopically. This recommendation against routine performance of chest CT scans is consistent with current guidelines (6,27).

This study is population-based, thus avoiding the bias associated with more restricted cohorts and suffering very little loss to follow-up. The population is young (age <45) and few health-related confounders are thought to exist in this study. In addition to the limitations inherent to a retrospective study, selection bias may exist in this analysis because the type of surgery performed for each patient was unilaterally chosen by the surgeon. The authors predicted that a surgeon’s decision about which procedure to perform may have been influenced by disease severity, which is why a priori the cases were stratified by disease severity. It is likely, however, that this stratification incompletely compensated for the selection bias. The cohort in this study was possibly too small to detect weaker associations despite the sample size being comparable to similar published studies (12-14). In comparison to the rest of Canada, the population of the Maritime provinces tends to be more rural, more Caucasian, and have a higher BMI (28-30). Despite these differences, the results of this study are generalizable to any North American population.

In summary, based on this retrospective observational analysis, no significant difference was found in the rate of recurrence of PSP treated with bullectomy and pleurectomy or bullectomy and pleurodesis. We were unable to properly assess the difference in recurrence between these rates and the rate for the bullectomy, pleurectomy, and pleurodesis group, because the recurrence rate for this group was zero. Performance of a combination of pleurectomy and mechanical pleurodesis with bullectomy may be indicated in cases of PSP suspected to be at higher risk of recurrence. A multi-centred randomized controlled trial (RCT) is necessary to further answer this question. Based on the temporal distribution of recurrences found in these data, the 2 to 3-year follow-up used in most published pneumothorax-related RCTs to date is inadequate and should be extended to 5 years of follow-up to accurately capture the recurrence rate.

An early version of this project was presented at the Dalhousie University Dept. of Surgery Research Symposium in Halifax, Nova Scotia, Canada, on June 3, 2020.

Reporting Checklist: The authors have completed the STROBE reporting checklist. Available at http://dx.doi.org/10.21037/jtd-20-3257

Conflicts of Interest: All authors have completed the ICMJE uniform disclosure form (available at http://dx.doi.org/10.21037/jtd-20-3257). The authors have no conflicts of interest to declare.

Ethical Statement: The authors are accountable for all aspects of the work in ensuring that questions related to the accuracy or integrity of any part of the work are appropriately investigated and resolved. The study was conducted in accordance with the Declaration of Helsinki (as revised in 2013). The study was approved by the institutional ethics board of the Nova Scotia Health Authority (File number 1024736) and individual consent for this retrospective analysis was waived.