Lung cancer remains the leading cause of cancer incidence and mortality worldwide, with non-small cell lung cancer (NSCLC) accounting for 85% of cases. Most NSCLC patients are at an advanced stage of the disease at diagnosis (1). Although immune checkpoint inhibitors and targeted agents have shown encouraging treatment efficacy for NSCLC (2-4), platinum-based dual-drug chemotherapy is an integral part of first-line standard treatment for most patients with advanced nonsquamous NSCLC (5,6). The phase III PARAMOUNT study demonstrated that in patients with advanced nonsquamous NSCLC who had nonprogressive disease (PD) after induction chemotherapy with 4 cycles of first-line pemetrexed plus cisplatin, pemetrexed continuation maintenance therapy significantly prolonged progression-free survival (PFS) (4.4 vs. 2.8 months) and overall survival (OS) (13.9 vs. 11.0 months) in patients with a performance status (PF) score of 0–1 compared to placebo (7). Maintenance treatment is the prolongation of the treatment duration with the administration of additional drugs at the end of a defined number of initial chemotherapy cycles (8). Pemetrexed offers a high-efficacy and low-toxicity treatment option in the full management of advanced NSCLC, and the currently available clinical data support its use as first-line therapy, second-line therapy, maintenance therapy with the same drug, and maintenance therapy with different drugs (7,9). Pemetrexed maintenance therapy has become a routine strategy in patients with advanced nonsquamous NSCLC. The therapy aims to prolong tumor response or stable disease (SD), and is started immediately after first-line (pemetrexed-containing platinum doublet) therapy. Recent research has supported that pemetrexed maintenance therapy improves progression-free survival (PFS) and overall survival (OS) with good tolerability and safety. Maintenance therapy is usually administered until disease progression or unacceptable toxicity (7).

All 71 patients had received pemetrexed-based chemotherapy regimens. Pemetrexed (Alimta, Lilly, USA) was administered at a dose of 500 mg/m2 on day 1 (every 21 days for 1 chemotherapy cycle). Pemetrexed was used as the first-line drug in 54 patients (76.1%) and as a second-line or higher-line drug in 17 patients (23.9%). Fifteen of the patients treated with second-line pemetrexed had received first-line tyrosine kinase inhibitors (TKI). The treatment regimens included the following: (I) pemetrexed monotherapy in 5 cases (7.0%); (II) dual-drug combinations with pemetrexed plus platinum in 50 cases, including the combinations with cisplatin in 31 cases (43.7%), with carboplatin in 16 cases (22.5%), and with nedaplatin in 3 cases (4.2%); (III) tri-drug combinations (pemetrexed + platinum + anti-angiogenic drug) in 14 cases (19.7%); (IV) pemetrexed combined with other treatments, including pemetrexed plus antiangiogenic drug in 1 case and pemetrexed plus antiangiogenic drug plus osimertinib in 1 case. Fifty-five patients (77.5%) received pemetrexed maintenance therapy, the median number of cycles of maintenance therapy was 6 (range, 1–25 cycles), and the remaining 16 patients (22.5%) did not receive pemetrexed maintenance therapy.

Medical histories and the results of physical examination, laboratory tests (including complete blood count, urinalysis, and liver and kidney function), and electrocardiography were collected before the administration of chemotherapy regimens. Baseline imaging data were available for all patients. The long diameters (for non-lymph node lesions) and short diameters (for lymph node lesions) of measurable target lesions were recorded, and the sites of nontarget lesions were recorded. Laboratory tests were performed every week, and all adverse events were collected. Patients were evaluated on imaging every 2 treatment cycles. Response evaluation was performed using the Response Evaluation Criteria in Solid Tumors (RECIST 1.1), which defines tumor response as complete response (CR), partial response (PR), stable disease (SD), or PD. The objective response rate (ORR) was the proportion of patients who achieved CR or PR, and the disease control rate (DCR) was defined as the proportion of patients with either an objective response (CR/PR) or SD. PFS was defined as the time elapsed from the start of the first chemotherapy cycle until disease progression or death of any cause, whichever occurred first. OS was the time from the start of the start of the first chemotherapy cycle until death of any cause (for patients lost to follow-up before death, the time of the last follow-up visit was calculated as the time of death). Adverse events were graded [1–5] according to the National Cancer Institute Common Terminology Criteria for Adverse Events, version 4.03. As 6 of 71 patients were lost to follow-up, the follow-up rate was 91.5%. All subjects were followed up until June 2020, with a median follow-up period of 32 months (range, 5–72 months).

All data were analyzed by using the SPSS 20.0 software package (IBM Corp., USA). Count data are expressed as cases and percentages. The potential correlation between each clinical feature and PFS was analyzed by regression analysis, with PFS as the dependent variable and the clinical features as the independent variables. Survival measures were analyzed using the Kaplan-Meier method. Multivariate analysis of variance (ANOVA) was used to analyze the correlation between each clinical factor and PFS. A P value of <0.05 was considered significantly different.

This study was approved by the Medical Ethics Committee of Peking University Cancer Hospital (No. 2018KT81). The study conformed to the provisions of the Declaration of Helsinki (as revised in 2013). All patients signed the “Informed Consent of Obtaining the Patient’s Medical Records to Conduct A Scientific Study”. The authors had no access to patient’s identities.

A total of 71 patients with advanced nonsquamous NSCLC admitted to our center from January 2015 to June 2017 were included in this study, all of whom were treated with pemetrexed-based regimens and could be evaluated for efficacy, safety, and survival.

PFS and OS after different lines of pemetrexed treatment 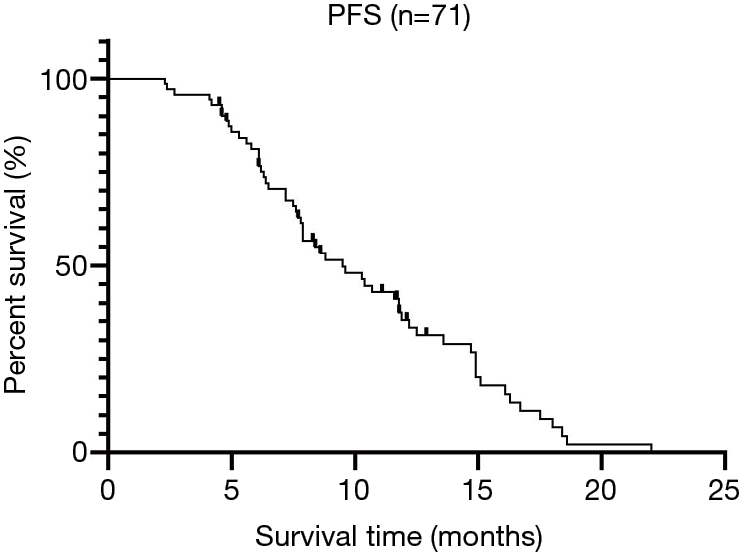 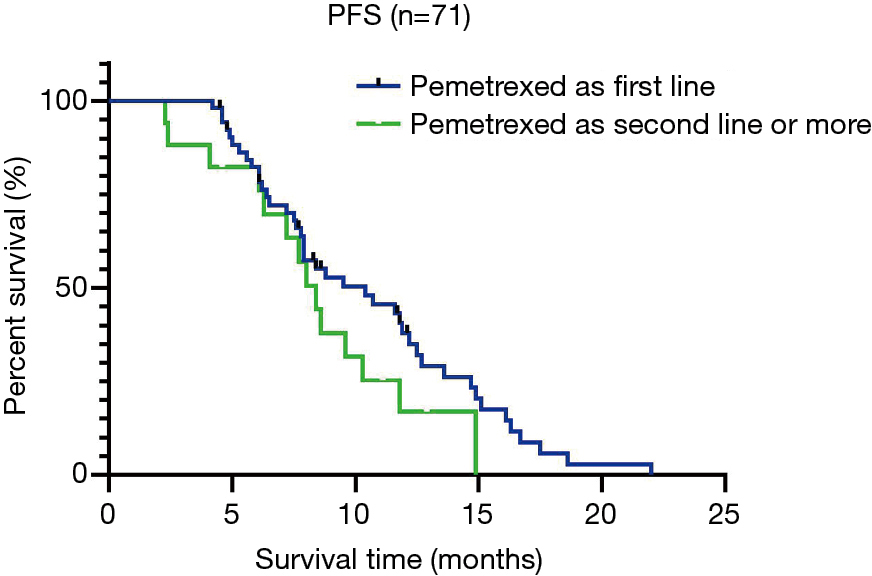 Univariate and multivariate analyses of the predictors of PFS 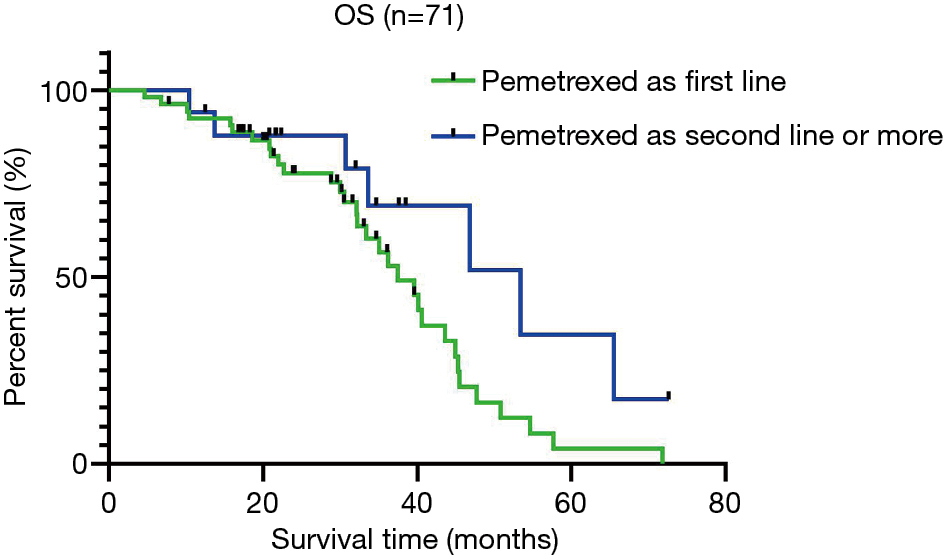 Univariate and multivariate analyses of the predictors of OS

All 71 patients received 3 or more cycles of chemotherapy (range, 3–­31). The common adverse reactions of the pemetrexed-based regimens were hematologic toxicities, mainly a grade 1–2 decline in the total leukocyte counts (TLC) (27 patients, 38.0%) and neutrophil counts (3 patients, 32.4%). In addition, the incidences of anemia and thrombocytopenia were below 10%. Among the nonhematologic toxicities, gastrointestinal reactions (28 patients, 39.4%) and liver enzyme abnormalities (9 patients,12.7%) were predominant. All events were grade 1 or 2, except for a grade 3 event in 1 patient. Some rarer (<5%) adverse reactions were grade 1 to 2 rash and peripheral neuritis (Tables 2 and 3). 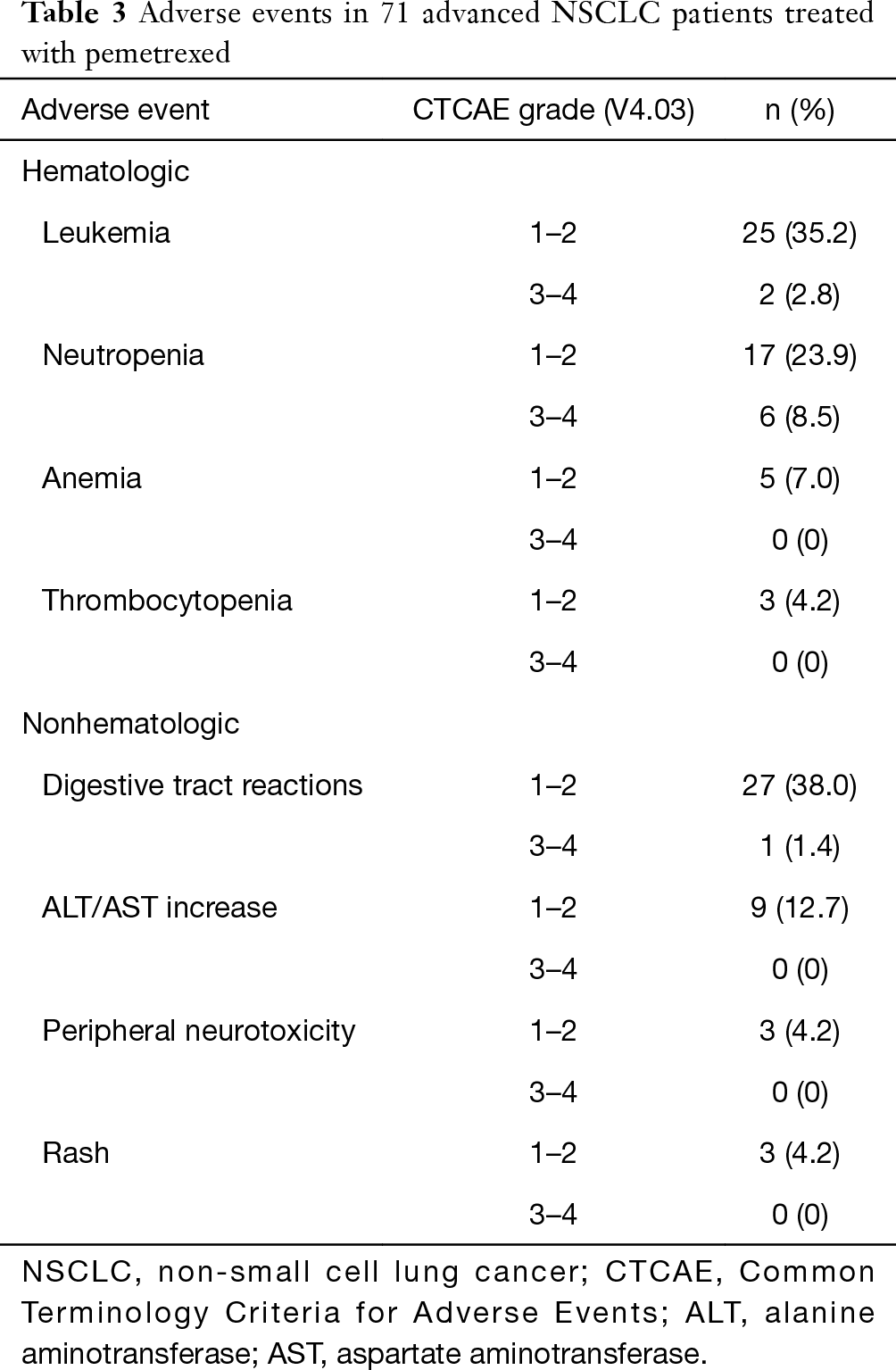 Despite its retrospective design, our current study showed no statistical differences in ORR and PFS between patients receiving first- and second-line therapy, and most patients (15/17) treated with second-line pemetrexed received targeted therapy in the first-line setting. Due to the presence of driver gene mutations, first-line oral targeted drugs did not affect the efficacy of second-line chemotherapy. There was prolonged OS in second-line settings due to oral administration of targeted drugs, although no statistical significant was noted due to the small sample size. Our study also found that 16 patients (22.5%) did not receive pemetrexed maintenance therapy due to limited chemotherapy benefit, toxicity, and other reasons; rather, they adopted a watch-and-wait strategy during follow-up. A multicenter randomized phase III clinical trial in Norway (16) compared two groups of patients with advanced nonsquamous NSCLC after induction chemotherapy: one group was directly treated with pemetrexed maintenance therapy, and the other group was first observed and then administered with pemetrexed at progression. Patients in the maintenance group had longer OS (median 12.0 vs. 10.0 months; P=0.10) and PFS (median 3.1 vs. 1.9 months; P<0.01), which was consistent with our findings that the number of chemotherapy cycles was an independent prognostic factor for PFS. Although the results of prospective and retrospective studies have confirmed the survival benefit of maintenance therapy, some patients still choose to adopt a watch-and-wait strategy during follow-up and will be rechallenged after disease progression due to the limited benefits and adverse effects of the maintenance therapy. A retrospective study (17) analyzed 31 patients with nonsquamous NSCLC who achieved disease control with first-line pemetrexed-based regimens and who received pemetrexed-based chemotherapy again after disease progression and found that patients with PFS ≥10 months benefited from rechallenge. In the subgroup with PFS1 <10 months, 4 were EGFR-mutation positive and 13 received EGFR-TKI therapy, which yielded a median PFS2 was 5.38 months; in the subgroup with PFS1 ≥10 months, 4 were EGFR-mutation positive and 9 received EGFR-TKI therapy; the median PFS2 was 4.33 months, which was not significantly different from that in the subgroup with a PFS1 <10 months, suggesting that chemotherapy efficacy was not affected by EGFR-TKI treatment, as found in our current study.

The most common adverse reactions in our patients receiving pemetrexed-based chemotherapy were grade 1–2 hematologic toxicities, gastrointestinal reactions, and liver enzyme abnormalities, which were resolved after treatment, and no dose reduction of the chemotherapy was required. Only 1 patient experienced a grade 3 gastrointestinal event, which was considered to be related to cisplatin. Some rarer (<5%) adverse reactions were grade 1–2 rash and peripheral neuritis (Table 2). In general, the tolerability was good in all patients, and no dose reduction was required due to treatment-related toxicities.

Reporting Checklist: The authors have completed the STROBE reporting checklist. Available at http://dx.doi.org/10.21037/jtd-21-337

Conflicts of Interest: All authors have completed the ICMJE uniform disclosure form (available at http://dx.doi.org/10.21037/jtd-21-337). The authors have no conflicts of interest to declare.

Ethical Statement: The authors are accountable for all aspects of the work in ensuring that questions related to the accuracy or integrity of any part of the work are appropriately investigated and resolved. This study was approved by the Medical Ethics Committee of Peking University Cancer Hospital (No. 2018KT81). The study conformed to the provisions of the Declaration of Helsinki (as revised in 2013). All patients signed the “Informed Consent of Obtaining the Patient’s Medical Records to Conduct A Scientific Study”. The authors had no access to patient’s identities.