Pulmonary hypertension (PH) is a relatively common complication of congenital heart disease and presents at any age from infancy to adulthood (1). Transposition of the great arteries (TGA) is associated with persistent PH, with a reported incidence of 1–3% of neonates born with TGA (2). The combination of PH and TGA often results in poorer outcome and prognosis (3).

However, there was a peculiar phenomenon in patients with TGA and ventricular septal defect (VSD) (4,5). Patients with TGA/VSD and severe PH could have improved quality of life after surgery (4-6). Yamaki et al. also found the pulmonary arterial media was significantly thicker in VSD alone than in TGA/VSD (7). In TGA patients, the pulmonary artery receives fully oxygenated blood oxygen saturation (nearly 100%) from the left ventricle (8,9). Therefore, we established an in vitro closed-circuit model to test the hypothesis that different oxygen saturation levels might lead to different extents of pulmonary vascular remodeling in a high-pressure perfusion environment and define the possible underlying mechanisms. We present the following article in accordance with the ARRIVE reporting checklist (available at http://dx.doi.org/10.21037/jtd-20-2124).

Twenty-five male New Zealand white rabbits (weight: 3.0±0.5 kg) were obtained from Beijing Vital River Laboratory Animal Technology (Beijing, China). All animals received humane care in compliance with the “Guide for the Care and Use of Laboratory Animals” prepared and formulated by the Institute of Laboratory Animal Resources and published by the National Institutes of Health (NIH Publ No. 86/23, 1985). The protocol was approved by the Institutional Animal Care and Use Committee of Fuwai Hospital [Ethicsethics approval number:No. 0086-4-36-GZ(Z)]. Laboratory rabbits were individually housed in cages with a 12:12-h light-dark phase at a standard temperature (21±1 °C) and controlled humidity (50%±10%). 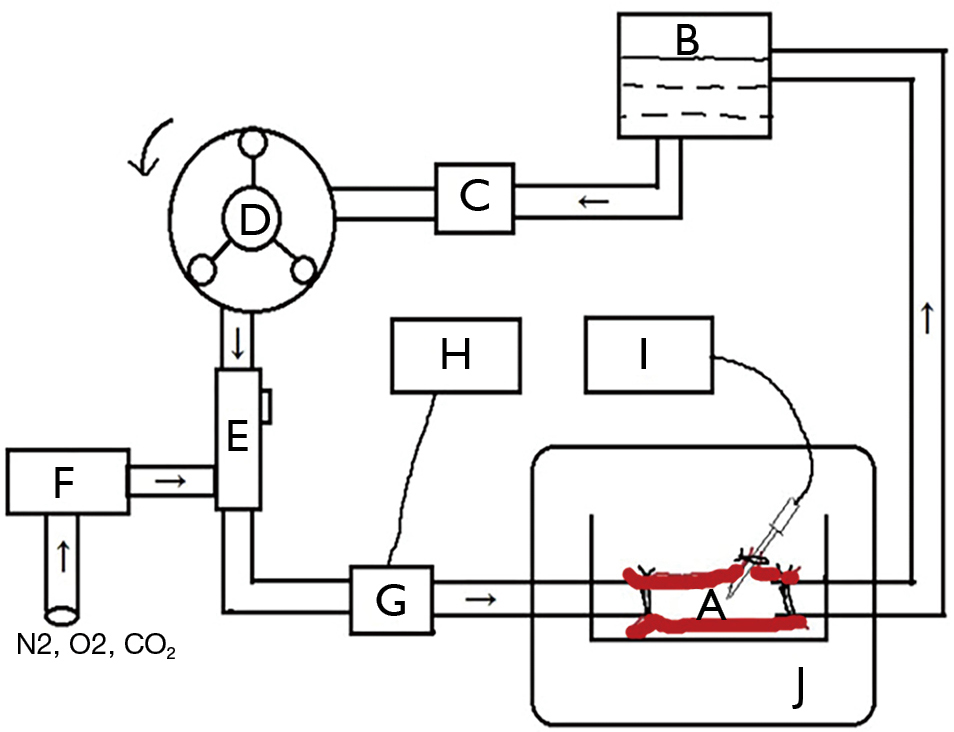 Before cannulation, the circuit was primed with 50 mL rabbit whole blood. The pulmonary artery segment was perfused by a roller pump (Masterflex L/S, model: 7725062; Cole-Parmer, USA). The mean pressure was maintained at 40–50 mmHg. Blood oxygen saturation and pressure were monitored and recorded. The pulmonary artery was immersed in the above culture medium and incubated for 48 h at 37 °C, 5% CO2, and 95% humidity. A schematic diagram of the closed-circuit is shown in Figure 1.

After perfusion, the vessel segments were removed and cut into 3–4-mm long rings. Some were flash frozen in liquid nitrogen and then stored at –80 °C. Others were immersed in a solution of 10% neutral-buffered formalin for 24 h at room temperature. The fixed vessel rings were placed in embedding cassettes, dehydrated in a series of ethanol dilutions, cleared with xylene, and finally embedded in paraffin.

Sections of 4 µm were cut from each tissue block. Serial sections were stained with hematoxylin-eosin, Weigert’s iron hematoxylin, and Van Gieson’s solution. Microscopic examination showed black elastin, yellow muscle, and pink collagen. Image analysis was done using Image Pro-Plus 6.0 software (Media Cybernetics). The media thickness was defined as the distance between the internal and external elastic lamina. The amounts of elastin, muscle, and collagen were measured at 12 locations spaced evenly around the perimeter, and a mean value was calculated for each section. The morphological evaluation was performed independently by a pathologist who was blinded to the study.

Statistical analysis was performed with SPSS 15.0 for Windows (SPSS, Chicago, IL, USA). All data were expressed as the mean ± standard deviation, P<0.05 was considered statistically significant. One-way analysis of variance (ANOVA) was used to determine differences between the 5 groups. Post-hoc least significant difference test was carried out if the initial ANOVA was significant.

Evaluation of the perfusion model

Arterial lumen enlargement, arterial wall thickening, loss of elasticity, and permeability were found in the HS, MS, LS, and anti-HIF1α groups (n=5/group) (Figures 2,3). Microscopic observation revealed that pulmonary artery wall thickening mainly occurred in the media layer. The endothelial cells lining the intimal layer were injured and even damaged. Elastin (black), muscle (yellow), and collagen (pink) content in the media layer were significantly higher in the HS, MS, and LS groups (P<0.05) compared with the control group. The amounts of elastin, muscle, and collagen increased significantly as blood oxygen saturation decreased. Furthermore, a significant improvement in pathological morphology was observed in the anti-HIF1α group (P<0.05). 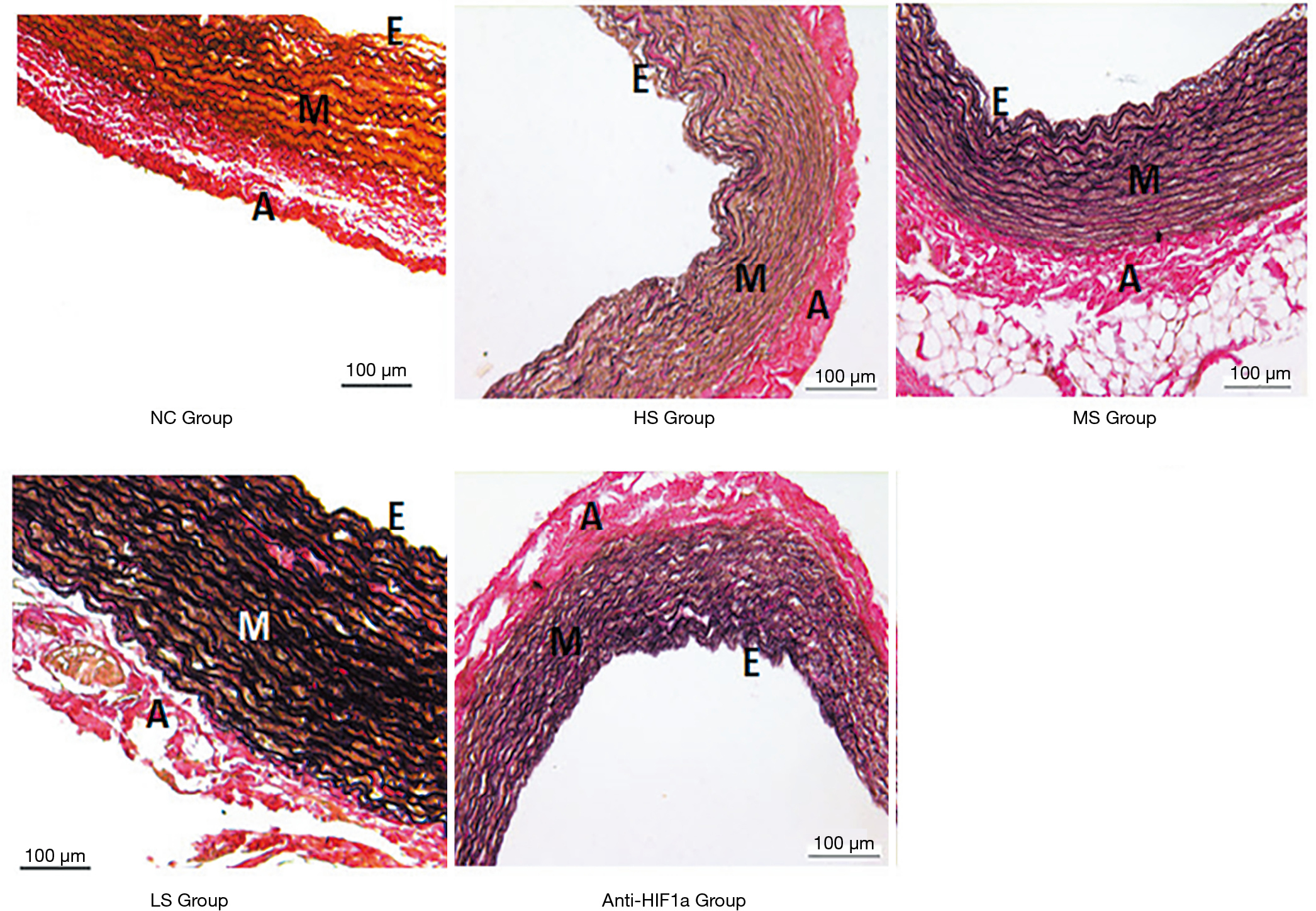 Western blotting showed that the increased expressions of HIF-1α, ET-1, Rock-1, and MMP-2 in the pulmonary artery tissue were associated with decreased blood oxygen saturation in the perfusion system (P<0.05) except for Ang-II (Figure 4). The expressions of HIF-1α, ET-1, Ang-II, Rock-1, and MMP-2 in the anti-HIF1α group were significantly lower than those in the LS group (P<0.05). 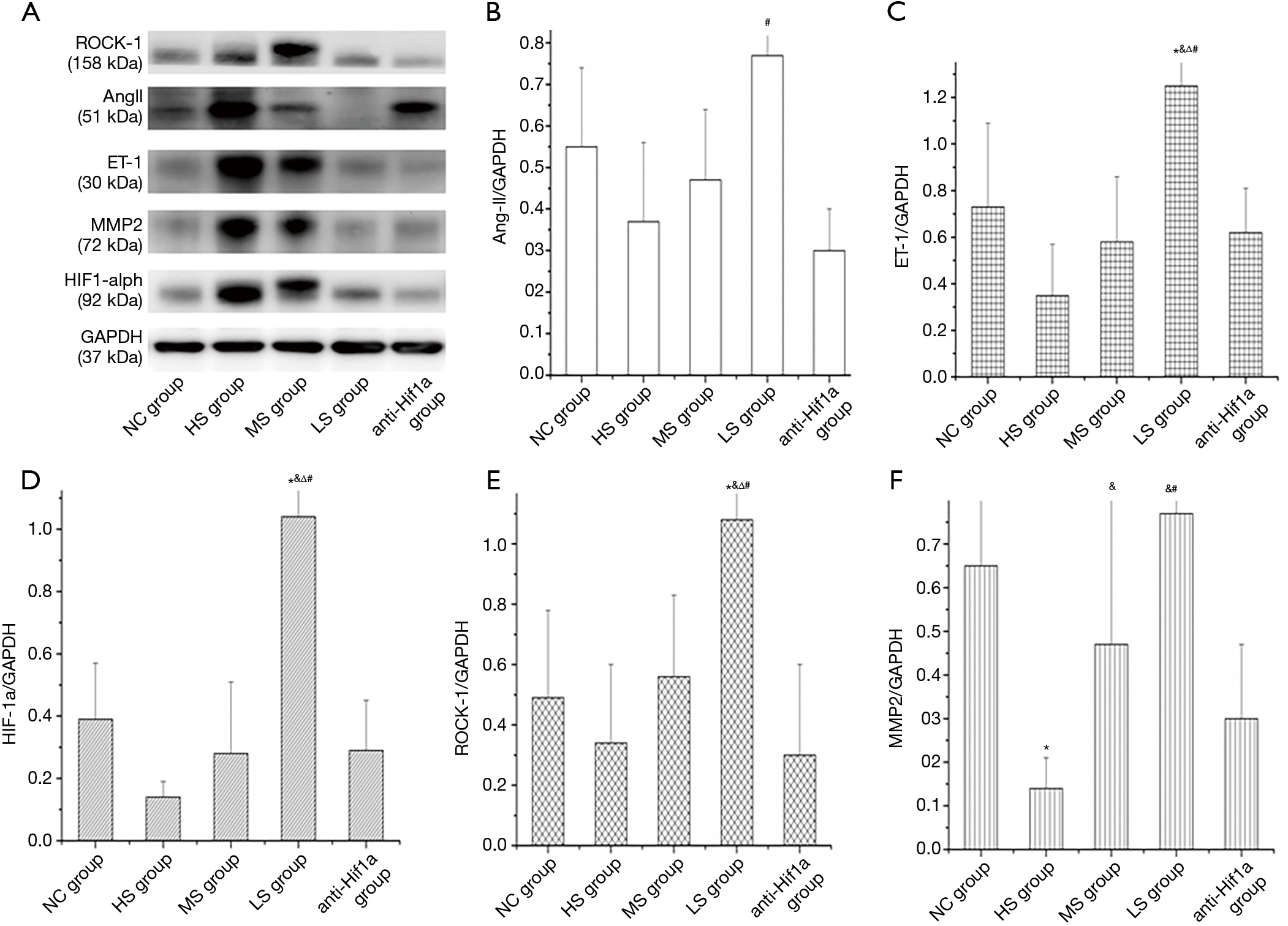 HIF-1 is a highly conserved transcription factor that regulates the oxygen-dependent expression of hundreds of genes. It is a heterodimeric transcription factor composed of a constitutively expressed β-subunit and an oxygen responsive α-subunit. Under hypoxic conditions, HIF-1α is stabilized and translocated into the nucleus, binding to hypoxia-responsive elements, and activates the expression of genes, such as ET-1 and Ang-II (9,13,15). Increased ET-1 or Ang-II level activates the RhoA/Rho kinase pathway, leading to MMP-2 and vascular smooth muscle cell hyperconstriction (9,16). MMP-2 promotes vascular smooth muscle cell proliferation and pulmonary vascular remodeling (17,18). Our study revealed that increased expressions of ET-1, Rock-1, and MMP-2 correlated with decreased blood oxygen saturation. Expressions of HIF-1α, ET-1, Ang-II, Rock-1, and MMP-2 in the anti-HIF1α group were significantly lower than those in the LS group (P<0.05). HIF-1α regulates the proliferation of vascular smooth muscle cells and plays a key role in pulmonary vascular remodeling. Therefore, targeting HIF-1α may improve pulmonary artery hypertension outcome.

Interestingly, there was no correlation between increased Ang-II level and decreased oxygen saturation value in our study, which might be explained by the more complex and context-dependent Ang-II regulation system. A previous study revealed that the upregulation of angiotensin-converting enzyme (ACE) 2 level by hypoxia might counterpoise the effect of increased ACE, which is an enzyme that converts Ang-I to Ang-II. Therefore, increased Ang-II expression was not correlated to decreased oxygen saturation (Figure 5). Hypoxia can directly increase the expression of ACE2, which may be a protective factor for the development of hypoxia PH in the early stage (8,19). 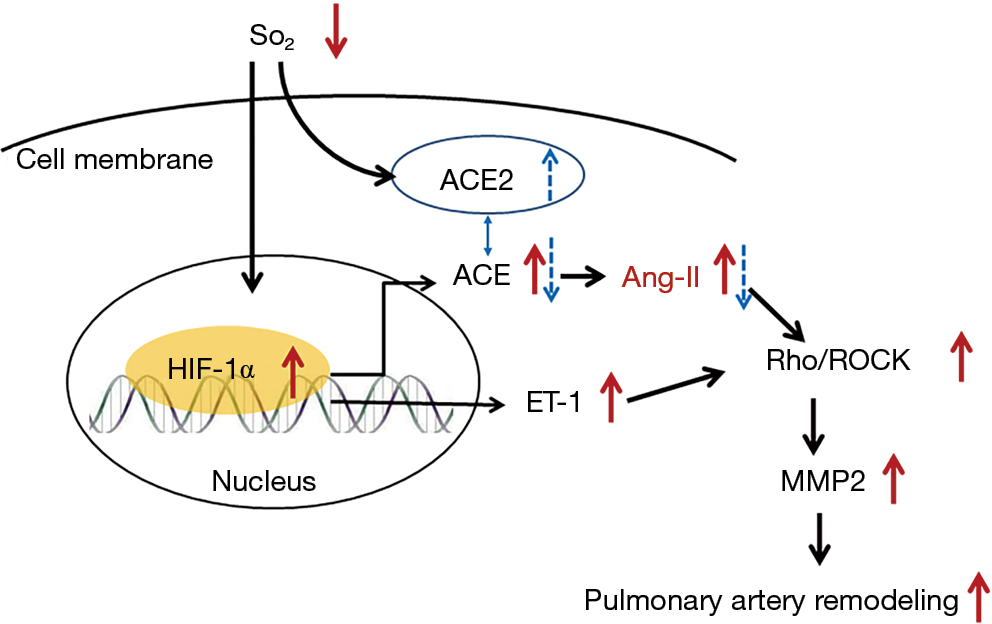 The present study has several limitations. First, the perfusion model’s major advantages are that it is easy to perform, control for confounding, and avoid certain biases. However, the body’s internal environment is not so simple. It is a complex environment affected by multiple organs and systems. Therefore, high oxygen saturation’s clinical application value also needs to be fully verified in in vivo experiments. How to achieve high oxygen conditions in pulmonary arteries is also the direction of future research. Second, several studies have shown that HIF-1α inhibitors can effectively reduce vascular smooth muscle cell proliferation (15,17-19). Therefore, inhibiting HIF-1α could become a new approach in PAH therapy. However, it is necessary to perform further studies to prevent and reduce unintended side-effects of HIF-1α inhibitors in the treatment of PAH. There is still much work to be done before these inhibitors can be introduced into clinical practice. Third, the detailed mechanism requires further verification by cell culture and gene knockdown animal models. Finally, the sample size was small, and further large-sample experimental and clinical studies are required.

Reporting Checklist: The authors have completed the ARRIVE reporting checklist. Available at http://dx.doi.org/10.21037/jtd-20-2124

Conflicts of Interest: All authors have completed the ICMJE uniform disclosure form (available at http://dx.doi.org/10.21037/jtd-20-2124). The authors have no conflicts of interest to declare.

Ethical Statement: The authors are accountable for all aspects of the work in ensuring that questions related to the accuracy or integrity of any part of the work are appropriately investigated and resolved. All animals received humane care in compliance with the “Guide for the Care and Use of Laboratory Animals” prepared and formulated by the Institute of Laboratory Animal Resources and published by the National Institutes of Health (NIH Publ No. 86/23, 1985). The protocol was approved by the Institutional Animal Care and Use Committee of Fuwai Hospital [ethics approval No. 0086-4-36-GZ(Z)].