Surgical rapid deployment valves have been developed, in order to facilitate surgical aortic valve replacement (AVR). They have significantly reduced cross clamp and cardiopulmonary bypass times and are more suitable for minimally invasive AVR and combined procedures (1,2). The Edwards INTUITY surgical rapid deployment valve (Edwards Lifesciences, Irvine, CA) is a construct of a surgical bioprosthesis which is extended with a cobalt-chromium alloy balloon expandable stent. The stent extension which is essential for valve anchoring may interfere with the conduction system of the heart and therefore may result in a higher need for permanent pacemaker implantation (PPI). The incidence of all cause PPI prior to discharge with the Edwards INTUITY surgical rapid deployment valve was reported to be 11.9% with the need for PPI predominantly occurring early after surgery (3-5).

We sought to determine the incidence, risk factors and indications for PPI in a large retrospective single centre cohort receiving AVR with the rapid deployment Edwards INTUITY valve system in combined procedures. We present the following article in accordance with the STROBE reporting checklist (available at http://dx.doi.org/10.21037/jtd-20-3120).

The Edwards INTUITY Valve System design is based upon a Carpentier-Edwards PERIMOUNT Magna Ease Pericardial Aortic Bioprosthesis. This design is modified with an attached pre-crimped, cloth-covered balloon-expandable cobalt-chromium alloy frame. After standard annular debridement and excision of the diseased native valve the implantation includes the placement of three locking sutures and balloon deployment of the sub-annular frame. The valve design may translate into a simpler and faster implantation, making it suitable for minimally invasive surgical approaches and combined procedures, in particular. The Edwards INTUITY Valve System is available in 19, 21, 23, 25, and 27 mm sizes.

Clinical data of all patients receiving AVR with Edwards INTUITY Valve System was retrieved from our institutional database. During the study period between April 2016 and December 2019 a total of 120 patients underwent AVR with the INTUITY valve system in a combined procedure. Patient-specific, procedural and post-procedural outcomes were assessed. Preoperative, operative data and findings at postoperative follow-up were analyzed. We specifically excluded those patients with prior pacemaker implantation and patients with concomitant ablation procedures for this study. The remaining 96 patients represent our investigational cohort (Figure 1). 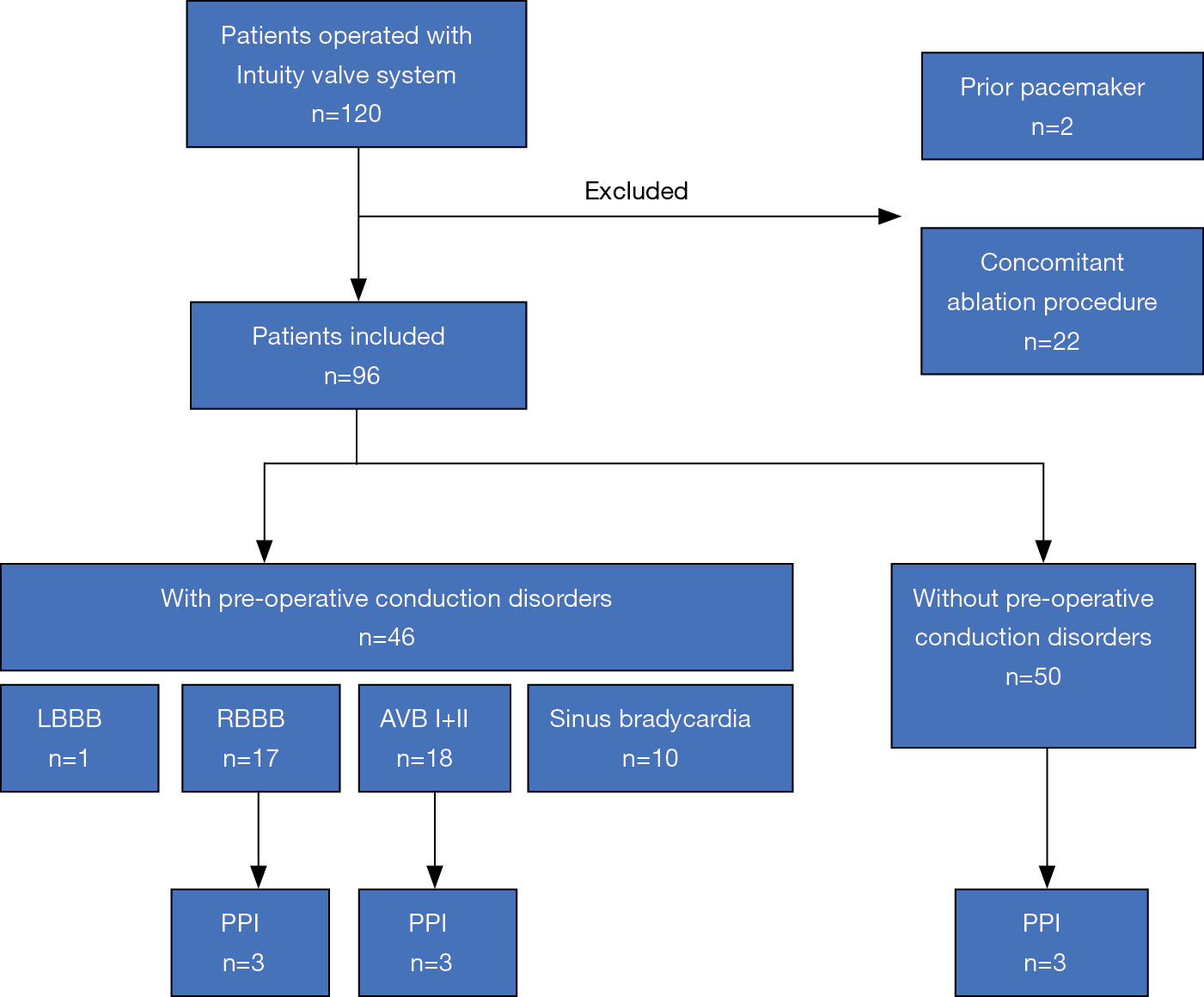 The study was conducted in accordance with the Declaration of Helsinki (as revised in 2013). The study was approved by institutional ethics committee (Technical University Munich, Faculty of Medicine, ethics committee vote number 427/17 s) and informed consent was taken from all individual participants.

All open-heart surgeries were performed through a midline sternotomy with standard bypass cannulation, moderate hypothermia (34 °C), and antegrade crystalloid cardioplegia. The diseased aortic valve leaflets were excised and annular calcium was debrided using conventional surgical techniques. The annulus was measured using the Edwards Lifesciences barrel sizer and the replica. Three equidistant guiding sutures were placed through the native annulus at the nadir of each cusp and then through the corresponding position of the valve sewing ring. It should be noted that the use of sutures with pledgets is not recommended because the pledgets may create paravalvular leaks. By using the specialized delivery system, the valve was lowered onto the annulus using the three guiding sutures. After the valve was seated, the balloon catheter was expanded to a nominal inflation pressure of 4.5 bar for valve sizes up to #23, and 5.0 bar for valve sizes #25 and #27 and was maintained for 10 seconds to ensure proper frame expansion. After deployment, the delivery system was removed, guiding sutures were tied, and the aortotomy was closed in routine fashion (Figure 2). 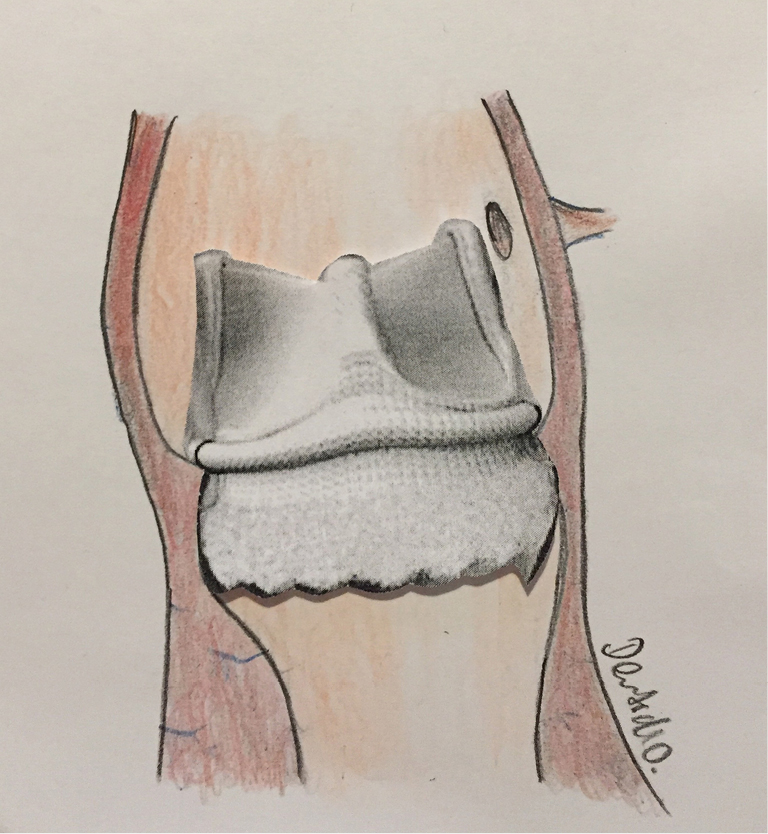 In this analysis, pacemakers implanted before discharge after successful implantation of the Edwards INTUITY valve are reported. The event of PPI following AVR was retrieved from our institutional database and indications for pacemaker implantation and timing were reviewed. Each PPI was documented with perioperative drug management, detailed operational notes, and accompanying pre-PPI ECG. Baseline conduction abnormalities included atrial fibrillation, atrio-ventricular block (AVB) of type I or II, complete or incomplete right bundle branch block (RBBB), complete or incomplete left bundle branch block (LBBB), and sinus bradycardia. Time to PPI was assessed as the number of days between PPI and AVR.

Our aim was to identify pre-existing conditions that were associated with all cause PPI in the early postoperative phase. We first conducted univariate analyses including various parameters. Based upon the outcome of these univariate analyses and clinical judgement, we developed a multivariate logistic regression model ultimately including 5 variables: patient age, patient sex, valve size, presence or absence of AVB (type I or II), and presence or absence of complete or incomplete RBBB. The output of the multivariate model whose parameters judged to be associated with all cause PPI through discharge were those whose P<0.05. Continuous data are presented as means ± standard deviation. Categorical data are presented as counts and percentages. Statistical analysis was completed using IBM SPSS Statistics for Windows, version 25 (IBM Corp., Armonk, NY, USA).

Two patients with prior pacemaker implantation (2/120, 1.7%) and 22 patients with concomitant ablation procedures (22/120, 18.3%) were excluded from the analysis. Patient-specific, procedural and post-procedural outcomes were assessed in the remaining 96 cases. AVR was successful in all cases. Concomitant procedures included CABG in 73 patients (73/96, 79.1%), replacement of the ascending aorta in 8 (8/96, 8.3%), mitral valve repair in 14 (14/96, 14.6%), tricuspid valve repair in 8 (8/96, 8.3%) and mitral valve replacement in 2 patients (2/96, 2.1%). There were no intraoperative and one in-hospital (1/96, 1.0%) death at day 6 following the procedure. The cause of death was mesenteric ischemia following triple coronary artery bypass grafting and AVR with Edwards INTUITY Valve System size 21. The last available postoperative electrocardiograms demonstrated no conduction disorders. 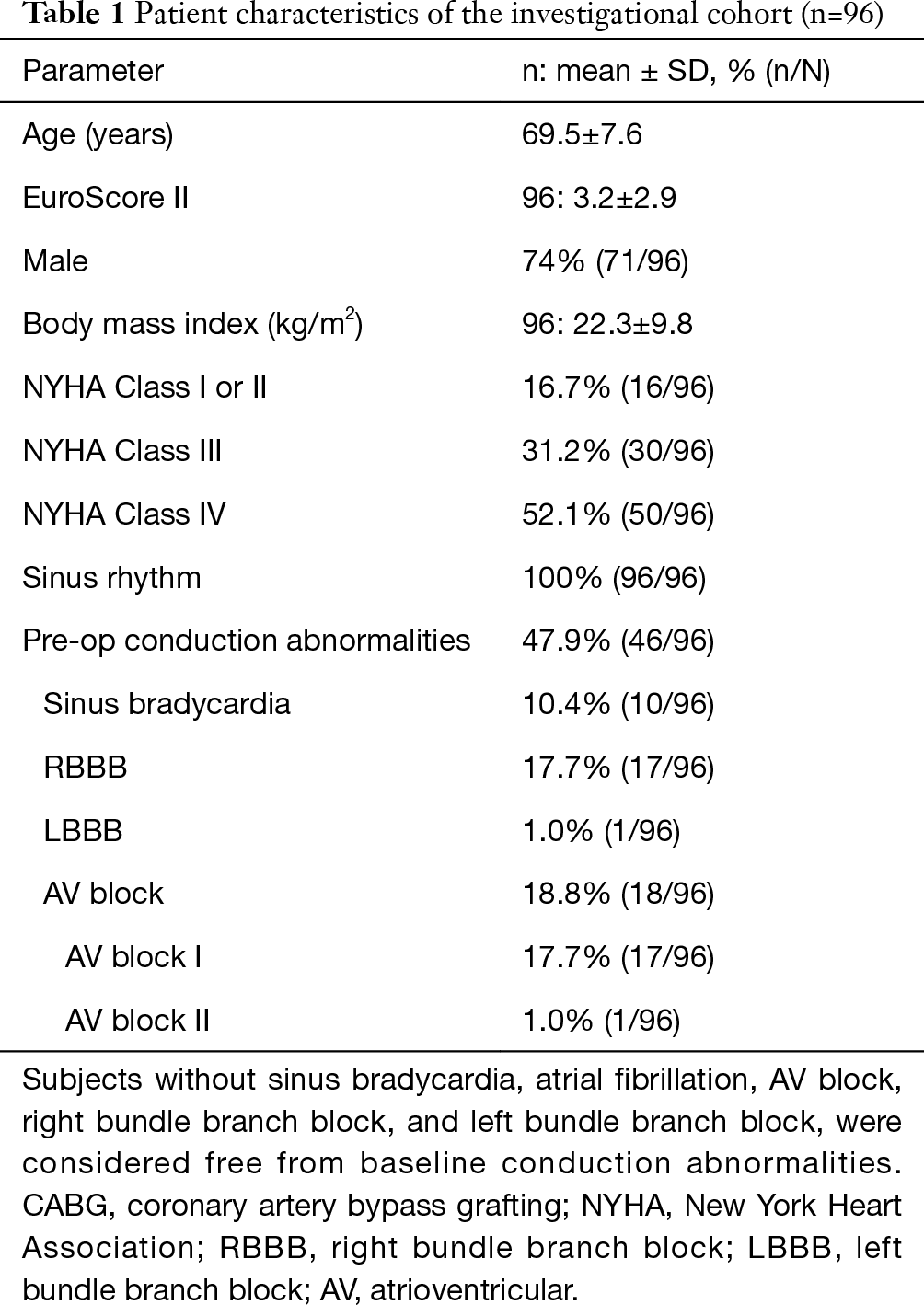 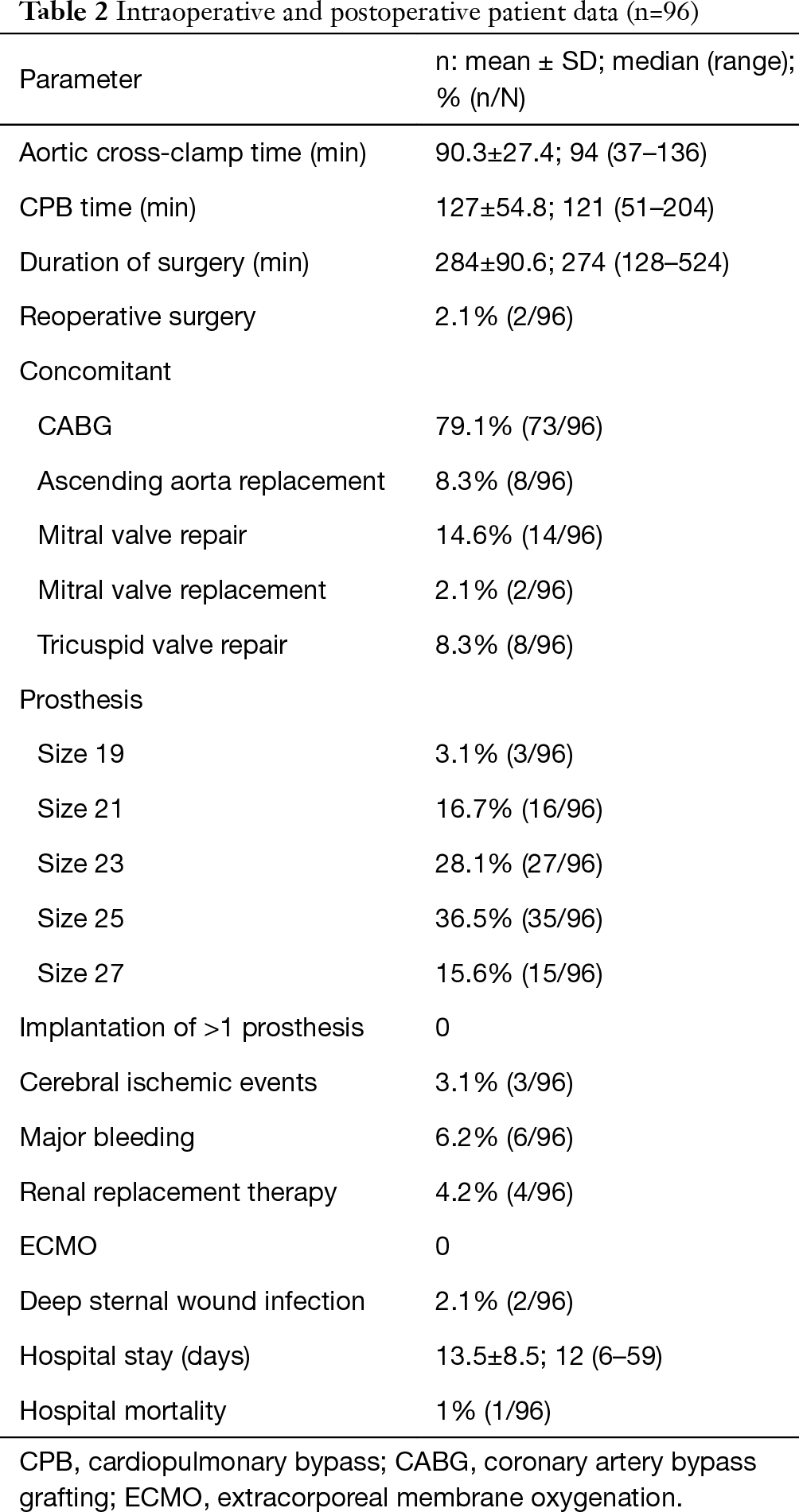 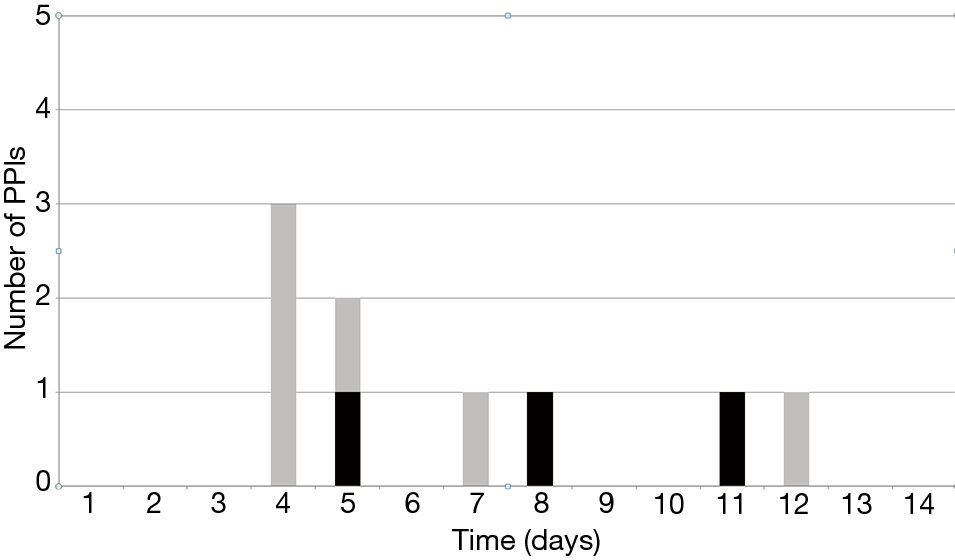 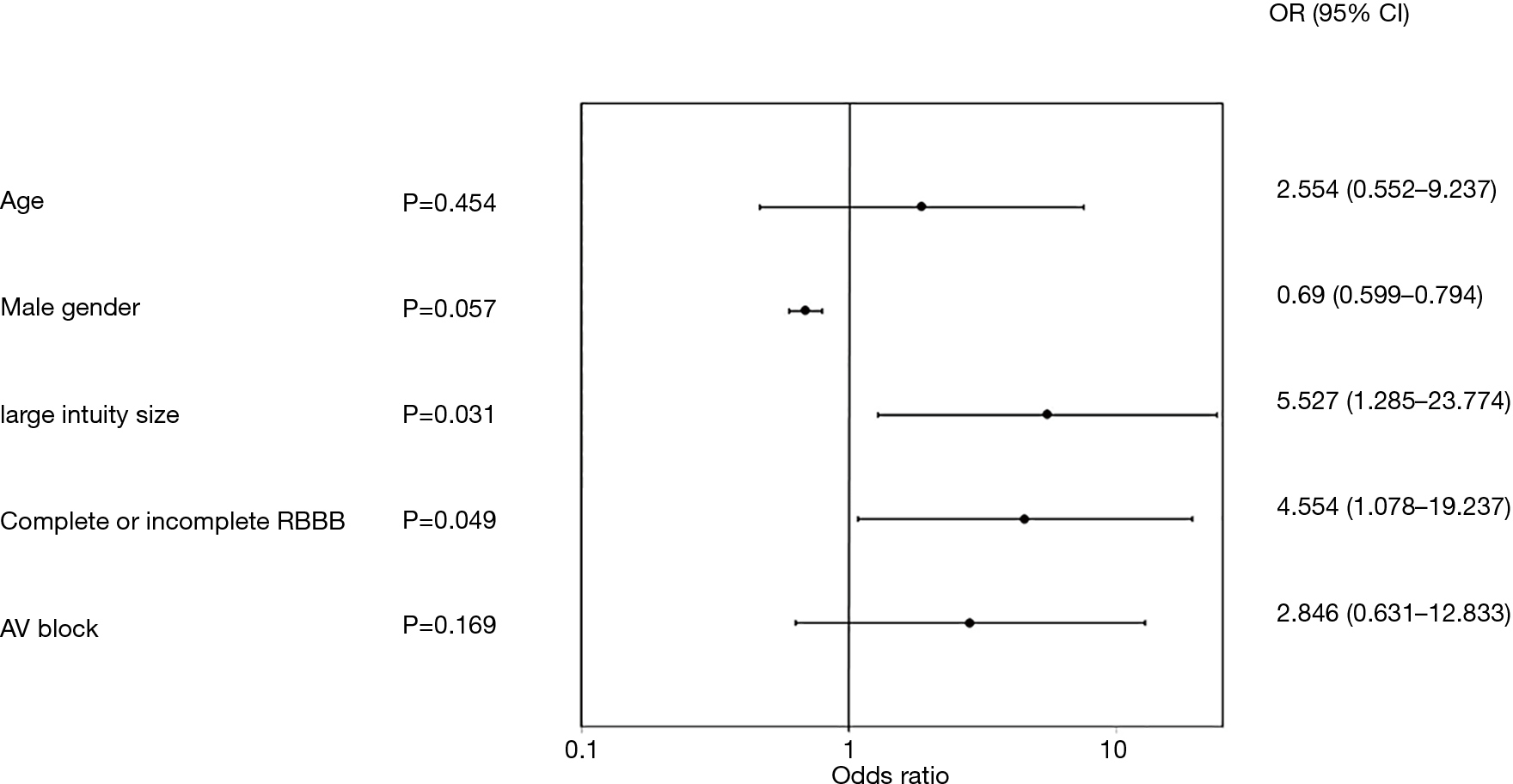 Anchoring of the rapid deployment aortic valve system relies on radial force exerted from a stent in the left ventricular outflow tract (5,6). This may cause damage to the conduction system with subsequent need for PPI (7). In our cohort the primary indication for PPI was AVB, with an incidence of 9.4%. Our results are comparable with a contemporary multicenter study by Romano, focusing on PPI following the implantation of the INTUITY valve in which the incidence of PPI was 12.3% (4). Published European studies report PPI rates between 1.7–9% following implantation of the INTUITY valve (2,4,8-11). The sutureless Perceval valve (Livanova PLC, London, UK) like the rapid deployment Intuity valve was developed to facilitate and increase the speed of surgical AVR, although the design is different. The PPI rates reported for that valve system are approximately 10% (12-14). In comparison, the PPI rates for conventional surgical AVR were recently reported to be 2.9% in the surgical arm of the Partner 3 trial (15).

Approximately half of our patients presented with pre-existing conduction abnormalities such as AVB (18.8%) and RBBB (17.7%), respectively. The current analysis clearly identifies pre-existing RBBB and large valve size as independent predictors of PPI following implantation of the Edwards INTUITY valve. Our finding is also supported by the current literature. In a study by Dawkins the presence of preoperative conduction abnormalities and specifically bundle branch block (BBB) have been shown to be predictors of PPI also in patients undergoing standard surgical AVR (16). Additionally, in a study by Van Mieghem, pre-existing BBB was associated with a significantly higher incidence of PPI following standard surgical AVR. In their study a BBB was present at baseline in 7% of patients, which resulted in a PPI rate of 8% compared to 1.5% in those without preoperative BBB (17). Moreover, the presence of BBB has been shown to be a predictor of PPI in patients undergoing transcatheter aortic valve replacement (TAVR) (18,19). van Gils et al. published pooled data on 306 patients following TAVR in 4 high-volume centers in Europe. In a subgroup analysis 41% of the patients with RBBB at baseline required PPI, ranging from 34% to 75% depending on valve design (20). Vogt et al. identified RBBB as an independent predictor of postoperative conduction disorders in multivariate analysis using the sutureless Perceval valve (21).

In an earlier study at our institution focusing on new-onset complete heart block after TAVR we reported a 2-fold increased risk for new-onset AVB in patients who received a large valve in a small annulus (22). However, one should bear in mind that experience from TAVR does not directly translate to surgical rapid deployment valves, since the technologies differ (e.g., valve resection and decalcification of the aortic annulus). Nevertheless, our results are supported by Romano et al. who showed that larger valve size was an independent predictor of PPI within 30 days following implantation of the INTUITY valve in a sub-analysis of the TRANSFORM trial. Other factors associated with the incidence of PPI (12.3% to discharge) were RBBB and female gender, whereas borderline significance was noted with AVB (4).

In the present study, we included only patients with concomitant procedures, such as coronary artery bypass grafting, replacement of the ascending aorta, mitral valve repair, mitral valve replacement, and tricuspid valve repair. The nature of the concomitant procedures had no significant effect on the incidence of PPI in our study. Furthermore, the rate of PPI did not change over the study interval, suggesting that a potential “learning curve” had also no influence. While our median time to PPI was on the 5th postoperative day, 33% of the patients received a pacemaker within 4 days following surgery. Pharmacologic management of atrial fibrillation and heart failure medications like beta-blockers may exacerbate conduction abnormalities. Therefore, it is our standard practice to discontinue all medications which might cause bradycardia in patients with postoperative AVB or brady-arrhythmias before the indication for PPI is decided. Current ESC/EHRA guidelines recommend an observation period of 5–7 days before implanting a permanent pacemaker; this potentially allows for regression of transient brady-arrhythmias or conduction disturbances (Class 1 recommendation) (23). Current ACC/AHA guidelines recommend permanent pacing before discharge in patients who have new postoperative sinus node dysfunction or AVB associated with persistent symptoms or hemodynamic instability that does not resolve after AVR (Class 1 recommendation). However, the decision regarding the timing of PPI is deferred to the physicians’ discretion by the US guidelines (24).

Several studies suggested that the need for PPI occurs mostly early after implantation of the INTUITY valve, similar to standard AVR. Therefore, our study focused on early, pre-discharge PPI and did not include post-discharge pacemaker interrogation data. In the present study 19 patients (19/50, 38%) without pre-existing conduction disturbance had new onset of LBBB, RBBB, or first-degree AVB at discharge but did not receive a PPI. In a recent single-center study focusing on new postoperative conduction abnormalities after the implantation of the INTUITY valve the incidence of new conduction abnormalities after surgery was 50.2% (LBBB, RBBB or new AV block III) which is considerably higher than the pre-discharge PPI rate of 9.7% (25). Similarly, another study reported an incidence of 30% new LBBB after TAVR using a balloon-expandable device. However, almost 60% of those patients exhibited a normal electrocardiogram at 1-year follow-up (26). Reports are conflicting as to whether these patients can recover from conduction disturbances, in particular LBBB (25).

This study is not a randomized study and, thus, carries the natural limitations. On the other hand, this large single-center study deriving its data from our institutional database reflects some real-world experience.

Reporting Checklist: The authors have completed the STROBE reporting checklist. Available at http://dx.doi.org/10.21037/jtd-20-3120

Conflicts of Interest: All authors have completed the ICMJE uniform disclosure form (available at http://dx.doi.org/10.21037/jtd-20-3120). RL reports other from Medtronic, other from Abbott, other from Highlife, outside the submitted work. MK serves as unpaid editorial board member of Journal of Thoracic Disease from Aug 2019 to Jul 2021. The other authors have no conflicts of interest to declare.

Ethical Statement: The authors are accountable for all aspects of the work in ensuring that questions related to the accuracy or integrity of any part of the work are appropriately investigated and resolved. The study was conducted in accordance with the Declaration of Helsinki (as revised in 2013). The study was approved by institutional ethics committee (Technical University Munich, Faculty of Medicine, ethics committee vote number 427/17 s) and informed consent was taken from all individual participants.