Esophageal carcinoma (EC), the 8th most common cancer and 6th most common cause of cancer-related death worldwide, shows a gradual annual increase incidence (1-3). Although surgery has been considered the preferred first-line treatment for locally advanced EC (4), the survival rate differs substantially between cases. According to the latest version of National Comprehensive Cancer Network (NCCN) guidelines (5), follow-up is recommended for patients with completely resected pT2-4aN0M0 squamous cell carcinoma, and follow-up or adjuvant chemoradiation is recommended for patients with completely resected pT2-4aN0M0 adenocarcinoma. Regarding the variant prognosis of this population, the development of a prognostic model to facilitate the risk stratification and define high-risk cases that may benefit from closer follow-up or adjuvant therapy is imperative.

The 8th edition of the Tumor-Node-Metastasis (TNM) staging system of the American Joint Commission on Cancer (AJCC) is currently applied for predicting the survival of EC patients and guiding clinical practice (6). However, several previous studies have demonstrated the unsatisfactory predictive efficacy of the TNM staging system (7,8). Thus, additional prognostic factors to the TNM staging system, such as age, sex, chemotherapy information and lymph node harvested (LNH), should be considered when evaluated these patients.

In the current study, we analyzed resected cases of pT2-4aN0M0 EC from the Surveillance, Epidemiology, and End Results (SEER) database and Sun Yat-sen University Cancer Center (SYSUCC). The independent prognostic factors of overall survival (OS) and cancer specific survival (CSS) were identified, and prognostic nomograms were formulated. Risk-stratifying systems, based on the nomograms, were established to select the patients with an enhanced likelihood of poor survival. Different statistical methods were carried out to validate the models. Using the models, clinicians could refine treatment strategies and subsequently improve patient prognosis.

We present the following article in accordance with the TRIPOD reporting checklist (available at http://dx.doi.org/10.21037/jtd-20-3393).

Patients diagnosed with EC from 2004 to 2015 were retrospectively reviewed from the SEER database using SEER*Stat 8.3.5 software (https://seer.cancer.gov/seerstat/), and EC cases from 2001 to 2014 in the SYSUCC were also included. The study was conducted in accordance with the Declaration of Helsinki (as revised in 2013). Informed consent of enrolled patients and SYSUCC review board approval of were obtained in this study. The authenticity of the study has been validated by uploading the raw data onto the Research Data Deposit public platform (www.researchdata.org.cn), with the approval RDD number RDDA2020001859.

The inclusion criteria were as follows: (I) pathologically diagnosed with squamous cell carcinoma or adenocarcinoma; (II) underwent surgery and (III) pT2-4aN0M0 (according to the 8th TNM staging system). The exclusion criteria were as follows: (I) age <18 years; (II) clinicopathological or follow-up information was unavailable and (III) perioperative death. 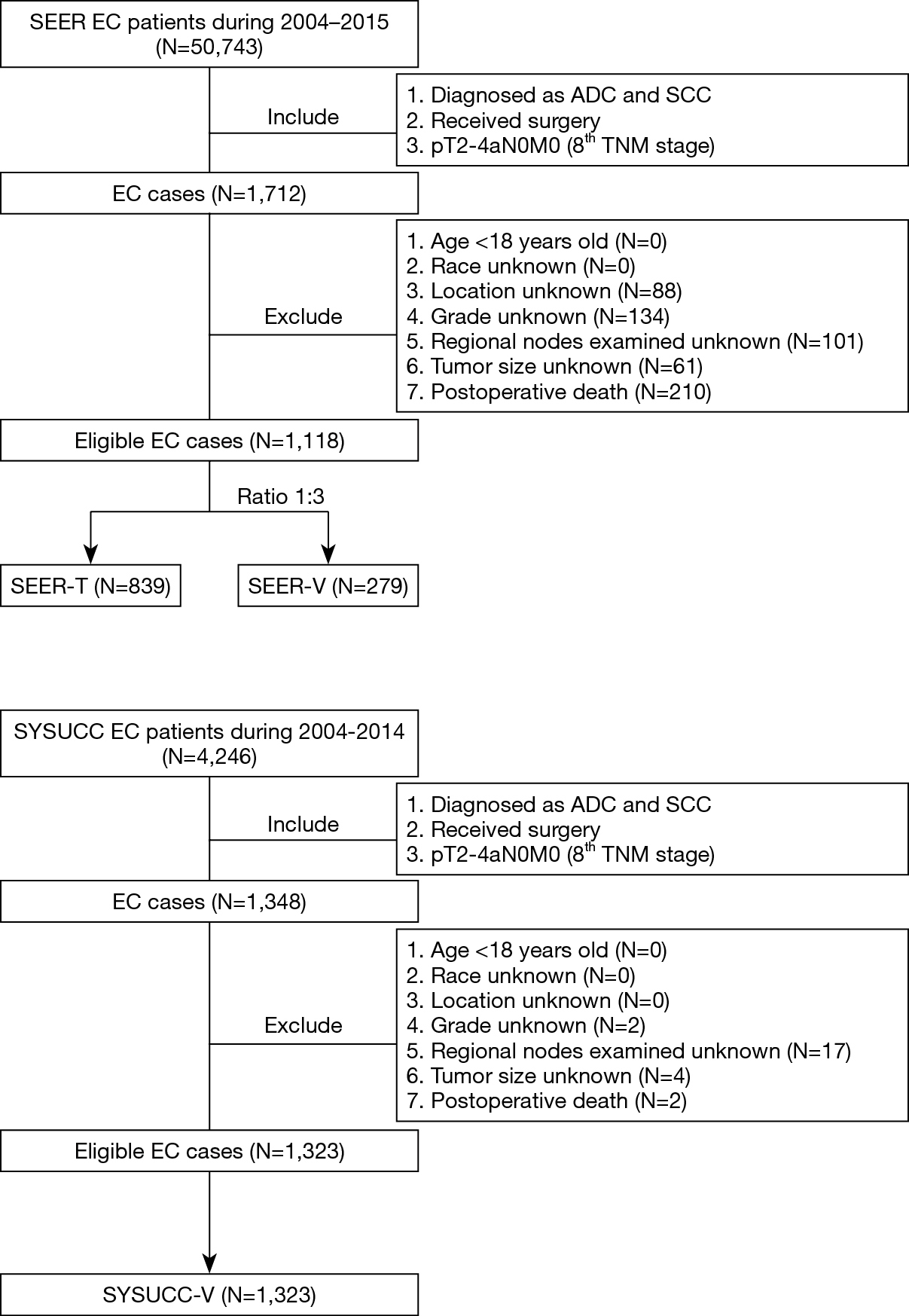 Between 2004 and 2015, a total of 50,743 EC cases from the SEER database were reviewed. The aforementioned selection criteria yielded a study population of 1,118 eligible EC patients (SEER-T, n=839 cases; SEER-V, n=279 cases). The general clinical features are listed in Table 1. The median age was 65 years old (range, 26–91 years). Almost all the patients were white (88.7%). Male patients (79.2%) and adenocarcinoma (70.3%) accounted for a substantial proportion of the entire cohort. There was a slightly high percentage of low-third tumors (75.3%). Over half of patients received radiotherapy (59.9%). The median follow-up time was 30.0 months (range, 1.0–155.0 months). All covariates between the training cohort and the validation cohort were well-balanced (Table 1). The clinical characteristics of the SYSUCC-V cohort are summarized in Table S1. 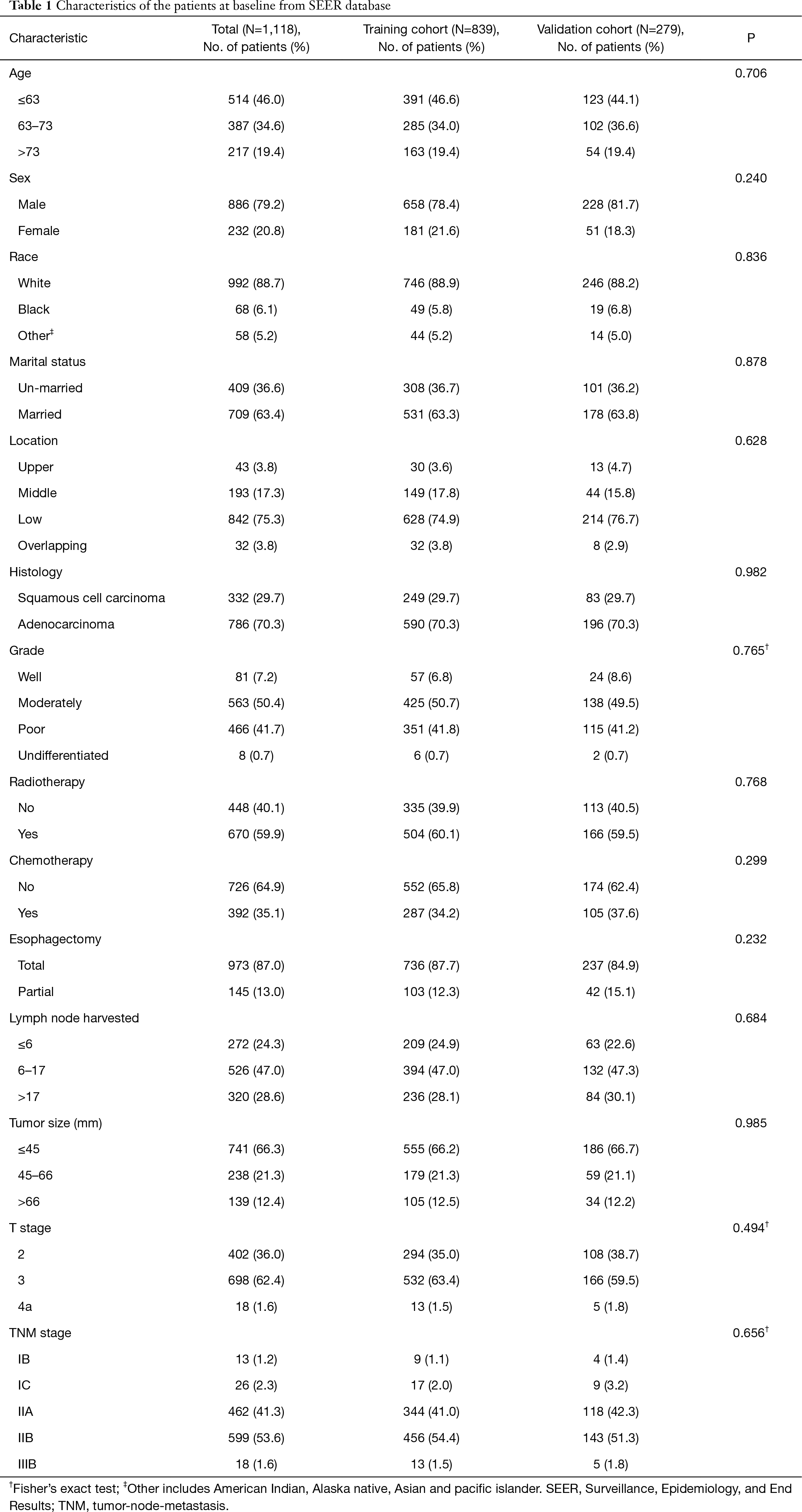 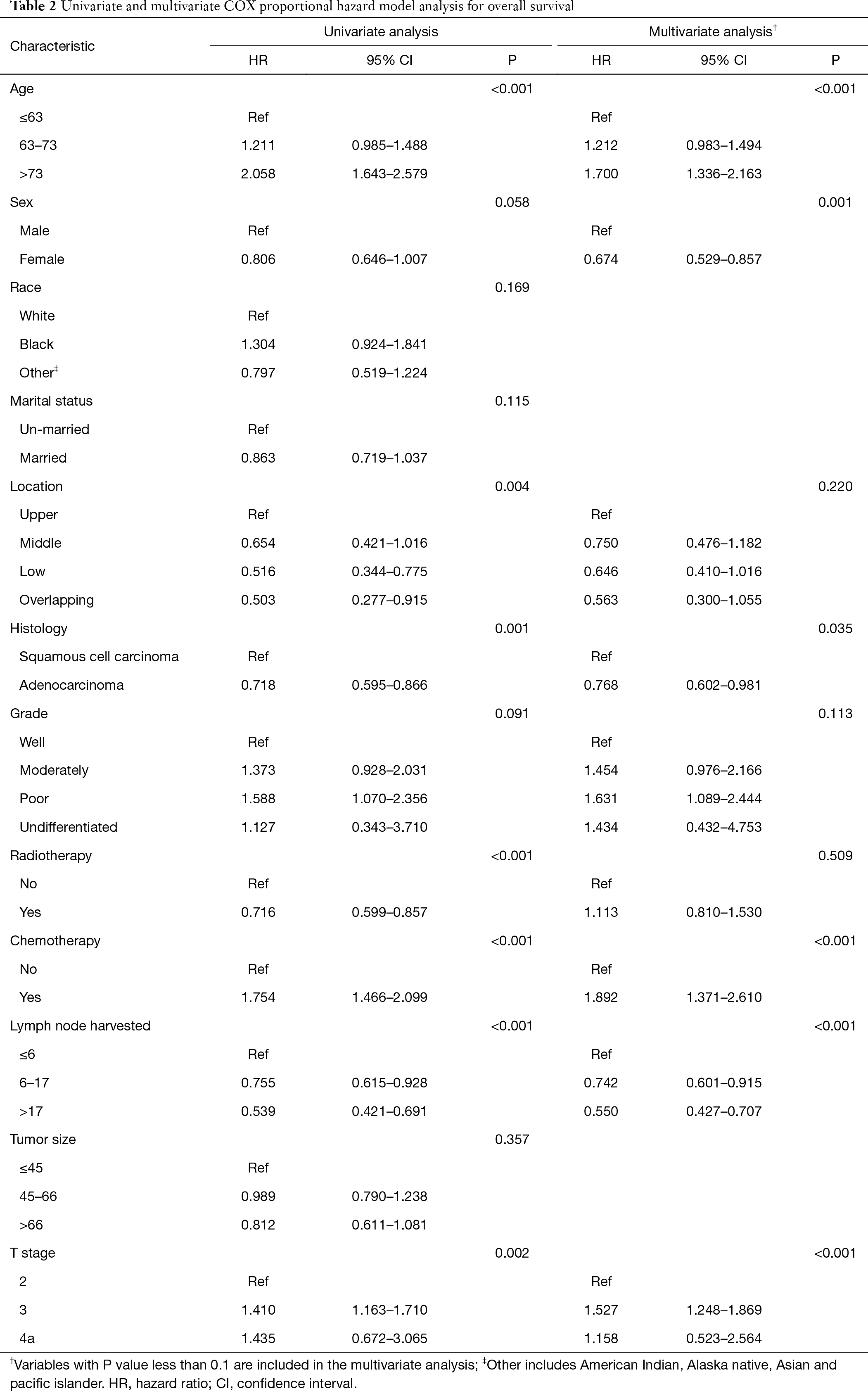 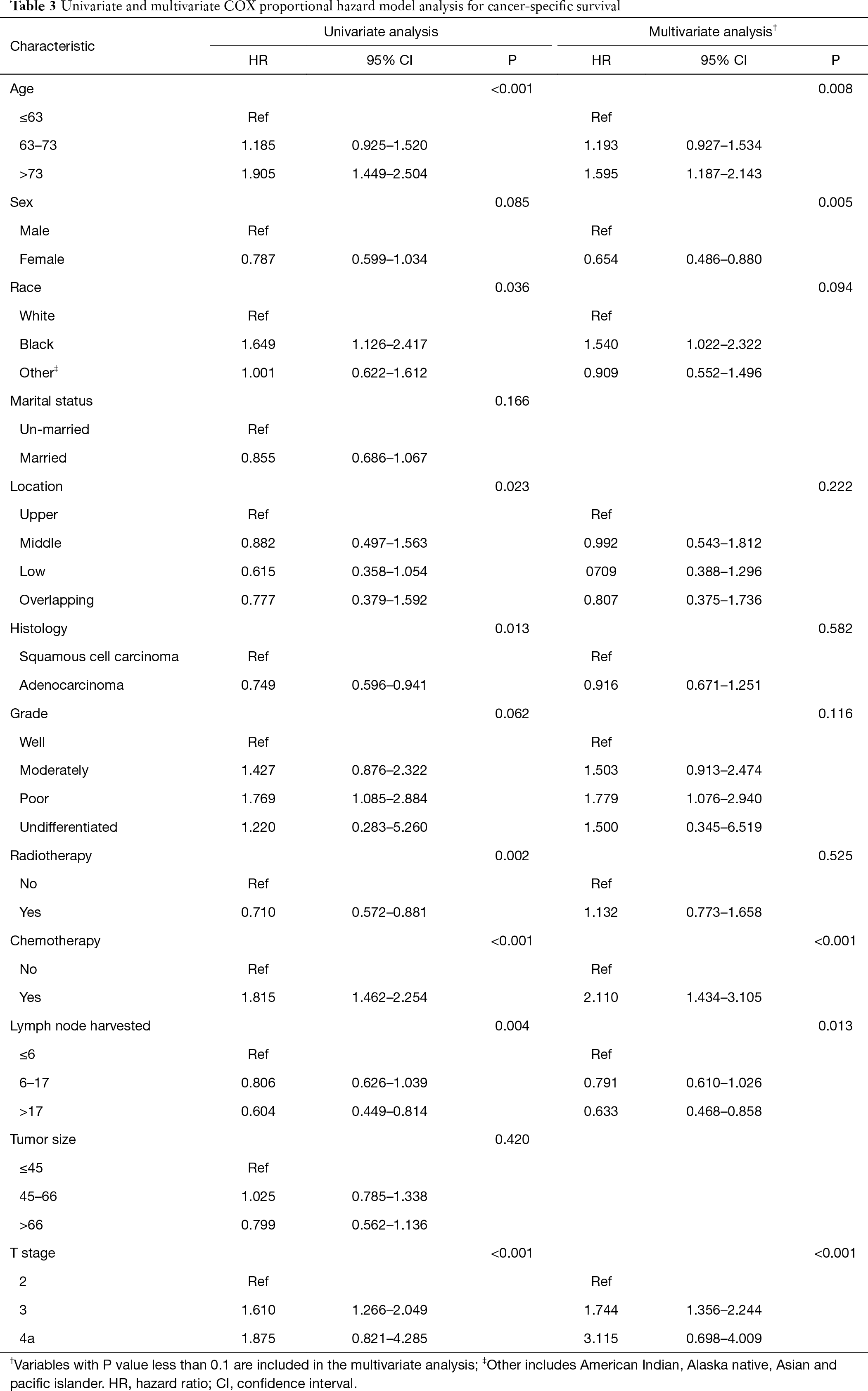 Statistically significant factors from the multivariate analysis were entered into the nomogram, which was developed to calculate 3, 5 and 10-year OS and CSS probabilities (Figure 2). With regard to OS, the nomogram indicated that LNH was the strongest predicator, followed by age and chemotherapy (Figure 2A). Concerning CSS, the graphic demonstrated that T stage was the strongest predicator, followed by LNH and age (Figure 2B). 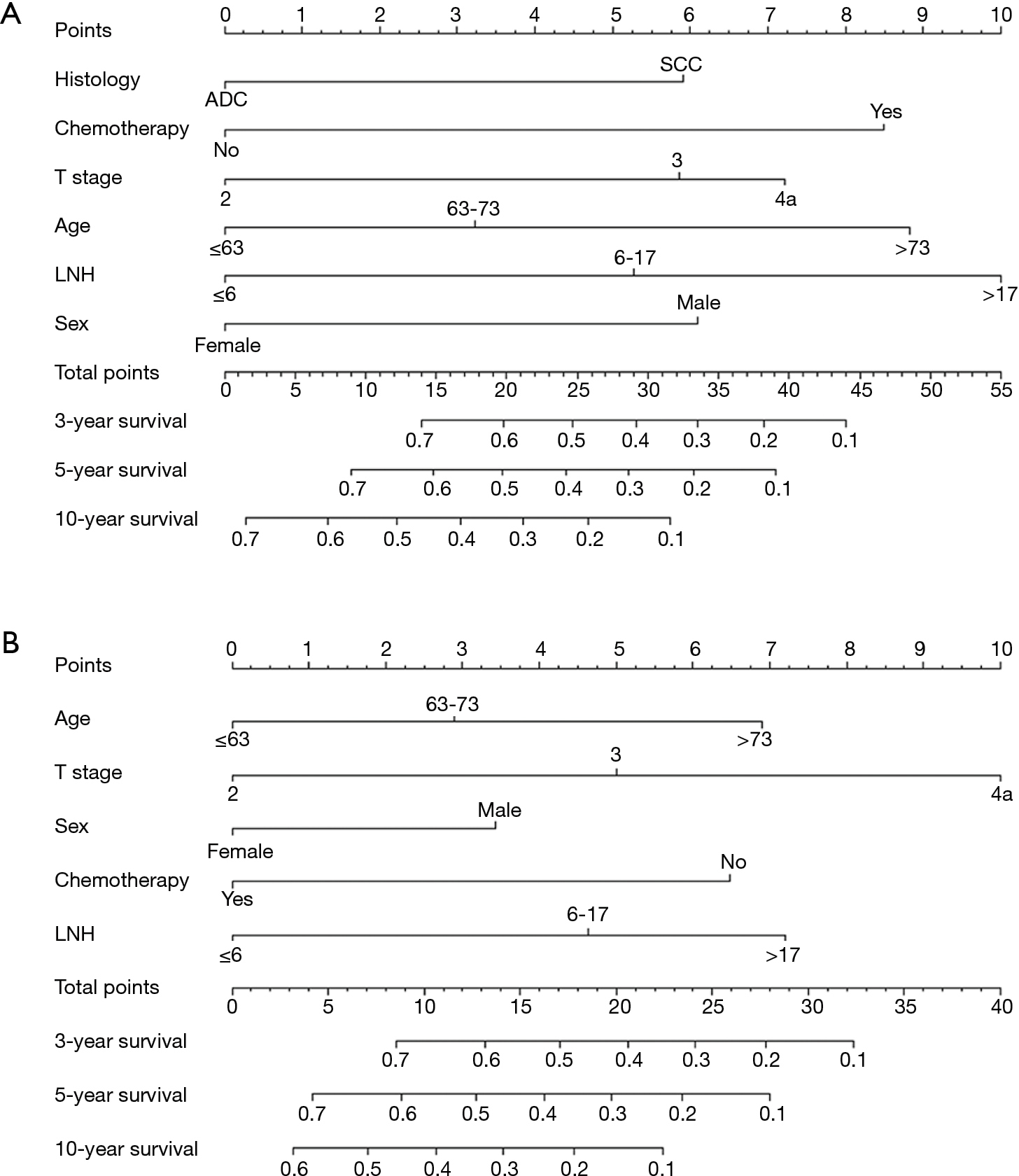 In further analyses, each independent prognostic variable was assigned a risk score according to the point scale using R software. A total score was calculated. The total cutoff values (21.0 for OS and 14.0 for CSS), determined by X-tile software, were used to dichotomize EC cases into low-risk and high-risk subgroups (Table 4). 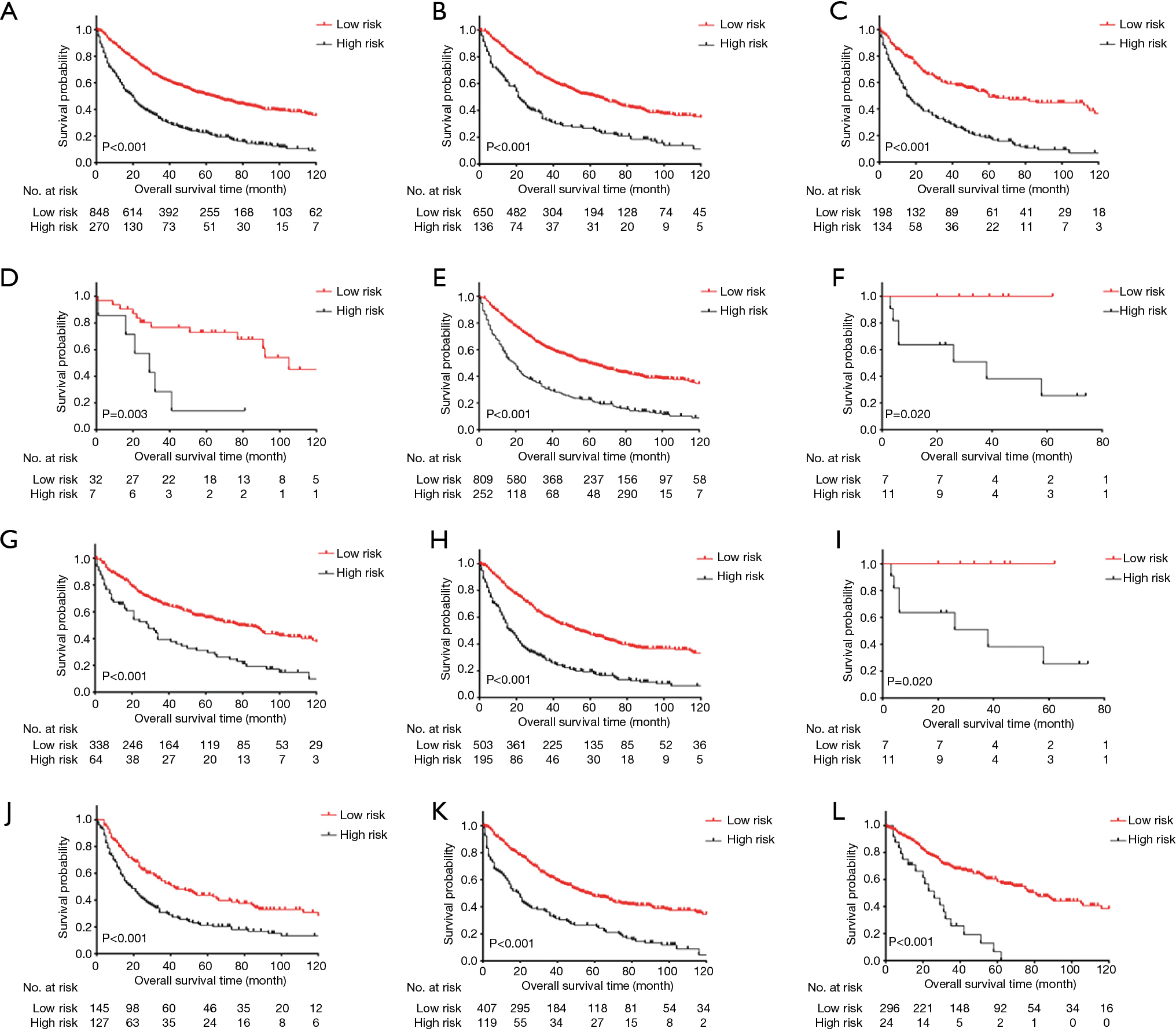 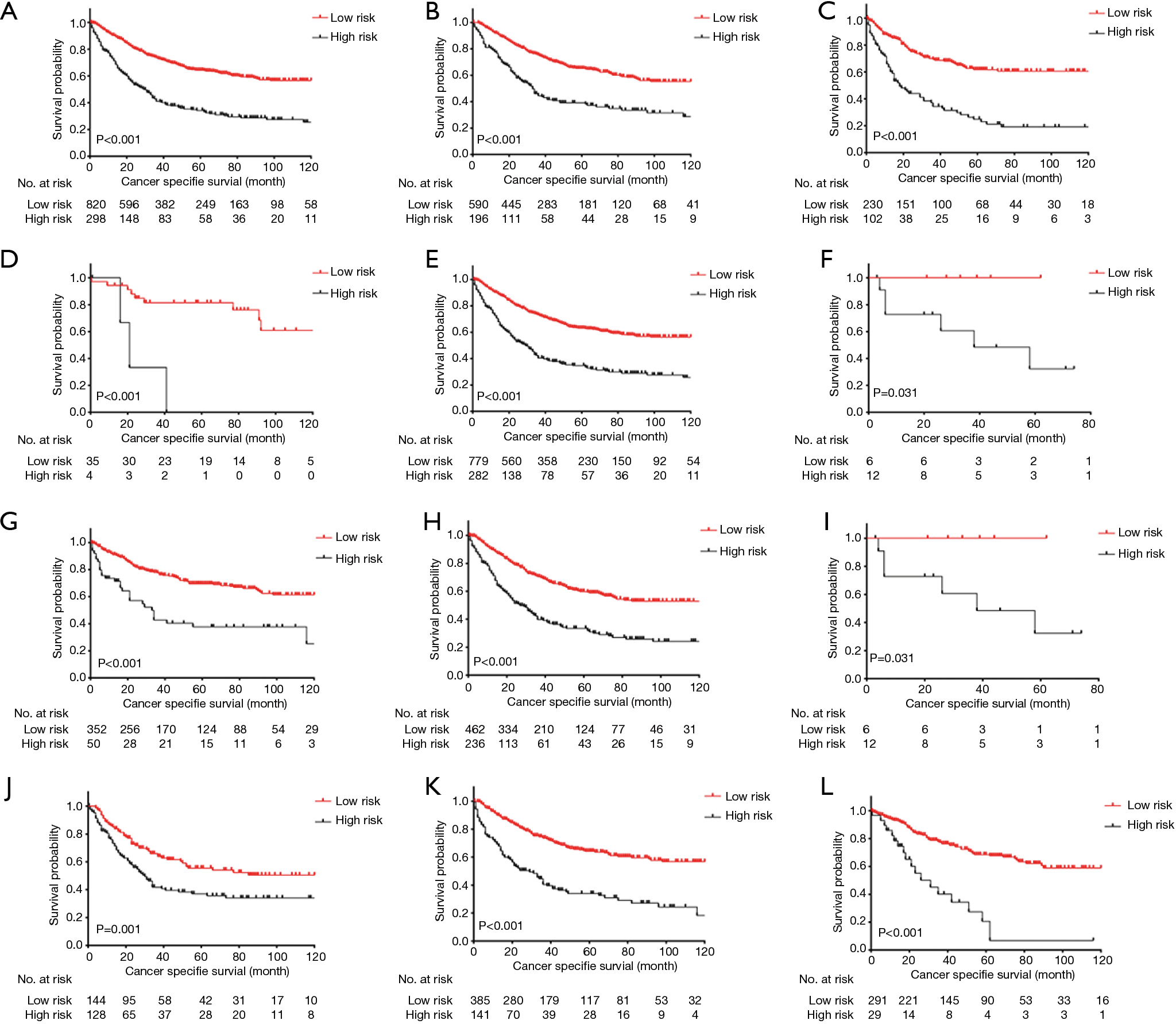 In the present study, novel prognostic nomograms, including routinely available factors such as age, sex, histology, chemotherapy, LNH, and T stage, was established to predict OS and CSS. The risk-stratifying systems stratified patients with resected pT2-4aN0M0 EC into two different prognostic groups. The validation of the models using the C-index, DCA, and calibration curves demonstrated its good performances. With the help of the easy-to-use models, clinicians could identify a subset of EC patients with poor survival who may need closer follow-up or intervention therapy.

Compared with advanced tumors, the clinical manifestation of relapse or progression of nodal negative tumors might be less obvious. As we all know, there are still many developing countries in the world. Esophageal carcinoma mostly occurs in the group of people with relatively poor economic situation, and most of them live in rural area far away. The expensive follow-up examinations and long distances form major obstacles for these patients to get scheduled follow-up examinations. Based on our classifying systems, we strongly recommend that the high-risk patients should return to hospital for a scheduled follow-up examination or even postoperative therapy, irrespective of cost.

According to the current 8th edition of the AJCC TNM staging system (6), the covariates adopted to subdivide pT2-4aN0M0 EC are depth of tumor invasion, location, grade, and histology. Our nomograms confirmed that the TNM stage factors such as depth of tumor invasion and histology were the independent prognostic predictors, but grade and location were not. From our perspective, the relatively small number of cases might interpret, to a certain extent, the no statistically significance of grade. As is widely acknowledged, patients with upper-third EC are unlikely to undergo surgery due to anatomical difficulties and technique challenges (4), and the limited treatment options may impair the survival of these patients. Only 43 (3.8%) upper-third EC patients in our cohort, and all cases included in our study underwent surgical resection. Therefore, the impact of location on long-term survival was not deep enough to reach statistically significance. In our nomograms, 4 other prognostic factors (age, sex, LNH, and chemotherapy) were also included, which contributed to the nomograms’ superior predictive value compared with the TNM staging system.

Despite several previously reported predictive models (7,8,13-20), a nomogram for resected pT2-4aN0M0 EC from two large databases with long-term follow-up has not been established. In the study by Du et al. (15), the authors reviewed data of 4,566 resected localized EC from the SEER database and developed a predictive nomogram. Unfortunately, there was unavailable clinicopathological information in their research, which could affect the model's predictive efficacy. Wu et al. (16) also analyzed 20,623 EC adenocarcinoma cases from the SEER dataset and established a nomogram to predict OS and CSS. Grade, T stage, N stage, M stage, underwent surgery, insurance record and marital status were entered into their nomogram which showed great performance (C index: 0.720–0.733) when compared with our nomogram. However, chemotherapy, a critical prognostic factor for survival, was lacking in their study. Moreover, the tumor stage was diagnosed either pathologically or clinically due to the inclusion criteria in their research, which may lead to bias. Molecular indicators such as integrated mRNA-lncRNA signature (21), Linc-PINT (22) and progranulin (23) were also reported in several prognostic nomograms. In our study however, only routinely available variables such as sex, age, histology, chemotherapy, T stage and LNH were used to formulate the nomogram, making the nomogram convenient in clinical practice. Furthermore, the nomogram was externally validated by another large cohort, and the results were generally applicable. Large case numbers with long-term follow-up and the use of both internal and external validation make our nomogram reliable.

Our study also has several limitations. First, the factors used to formulate the nomograms represented only a portion of clinicopathological characteristics owing to the SEER database, which had limited relevant information. Second, the quality of several data in the SEER database is relatively poor, for example, the median number of lymph node harvested in the SEER database is only 12, which is less than the number (at least 15 examined lymph nodes) recommended by the NCCN guideline (24), and it might lead to stage migration. Third, although the developed prognostic score models showed good discrimination capacity, further large-scale validation cohorts are warranted. Finally, the retrospective nature of the study may have contributed to selection bias. Further efforts on prospective study results collection and broader prognostic factors recruitment such as the timing and regimen of chemotherapy, timing and dosage of radiotherapy, resection margin, tumor markers, and genetic molecule indicators are encouraged to improve this nomogram.

In conclusion, the novel nomograms demonstrated good prognostic prediction for patients with resected pT2-4aN0M0 EC and stratified the population subset into low-risk and high-risk prognostic subgroups, which may aid individual clinical practice.

Reporting Checklist: The authors have completed the TRIPOD reporting checklist. Available at http://dx.doi.org/10.21037/jtd-20-3393

Conflicts of Interest: All authors have completed the ICMJE uniform disclosure form (available at http://dx.doi.org/10.21037/jtd-20-3393). The authors have no conflicts of interest to declare.